One of the largest rams of all time

Shortly after the Nevada draw results were posted last year, I received a call from one of my competitors — and good friend — Greg Krogh. One of Greg’s clients, Parks Shackelford, drew a desert bighorn sheep tag for Unit 268 (the Muddy Mountains) and wanted to know if we could guide him since Greg does not do sheep hunts. Of course I said we could and Parks called to book his hunt for the middle of the season since we were already booked for the opener. I think it is better to let opening day hunters clear out so we can have the place to ourselves. Everyone always wants to go opening day, but to me the quality of the hunt is always better in the middle or end of the season and you do not have to compete with all the other hunters, which can take a lot of the fun out of the hunt. 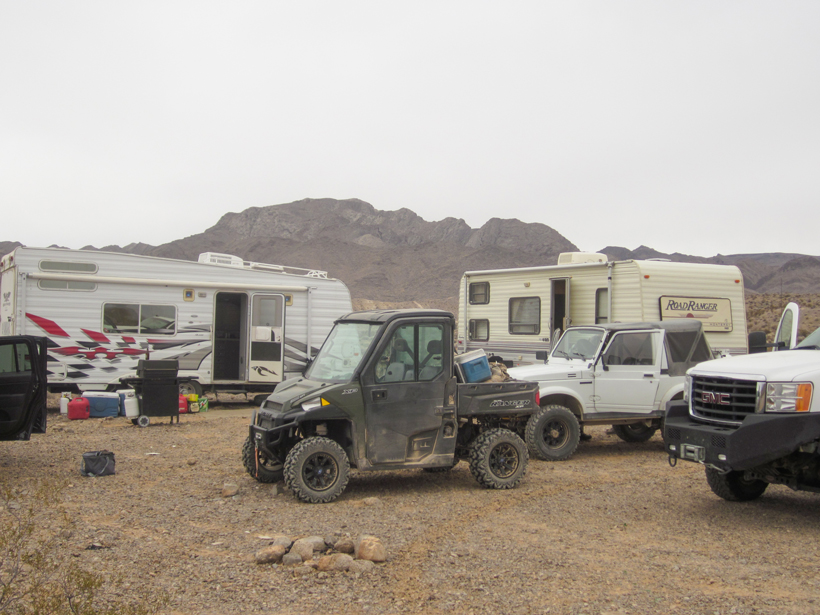 Parks arrived in camp the day before his hunt was to start in the beginning of December. We informed him that while we were out scouting, we had located a really big ram that we needed to try to get on the next morning. He had never sheep hunted before and told us that he did not want to shoot a ram on the first day of his hunt. As an outfitter, this is not unusual to hear, especially on a sheep hunt, because the client may never get to sheep hunt again. 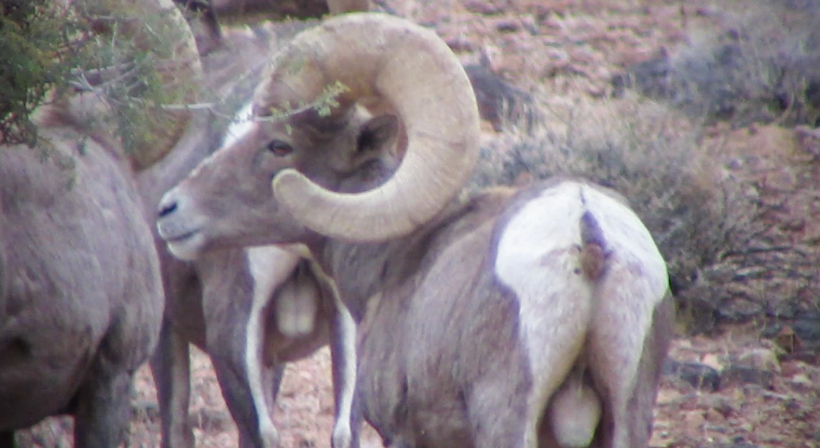 I told Parks that we had left the ram at dark and were very confident that we would be able to find him again in the morning. Parks had four guides instead of the two that he had booked since two of us had finished another sheep hunt early. I also told him that we had another hunter coming in a few days and he could stick around and get his “sheep experience” after he killed his ram. Parks said, “Well, we will see in the morning,” and we went to bed. I have been guiding for over 20 years and I do not usually have trouble sleeping before a hunt because it is what I do, but that night was different.

The next morning, we had some breakfast and coffee before heading to where we had left the ram the night before. When we got there, the four guides (Joe Maslach, Rick Laffins, Chris Hibler and me) all started to get our optics and chairs out to glass. When Parks saw all the optics and our Kowa binoculars (that weigh 14 pounds), he commented, “Wow, you guys are pretty serious about this.” 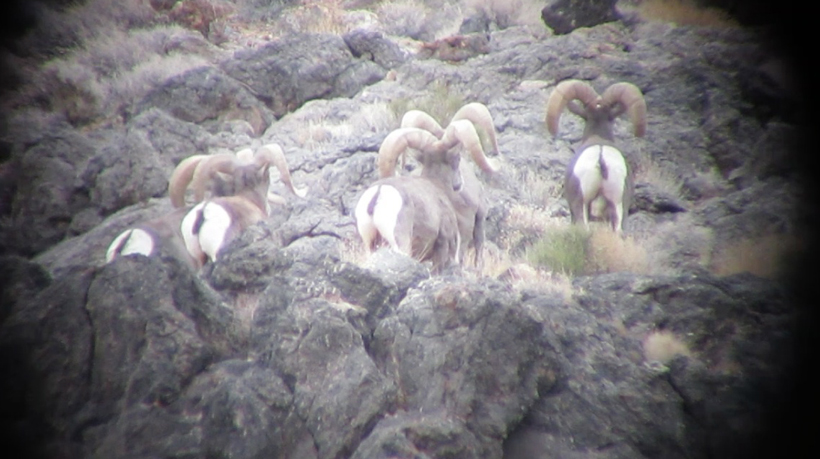 It was not long before we found the group of rams with the big ram. There were about 14 in the group and they were probably still a mile and a half away, but I asked Parks what he thought of the ram. He said he looked good to him, but there were two other rams that also looked big to him. I told him that was because they were big, but the day before when they stood next to the big one, there was no mistaking which was biggest. 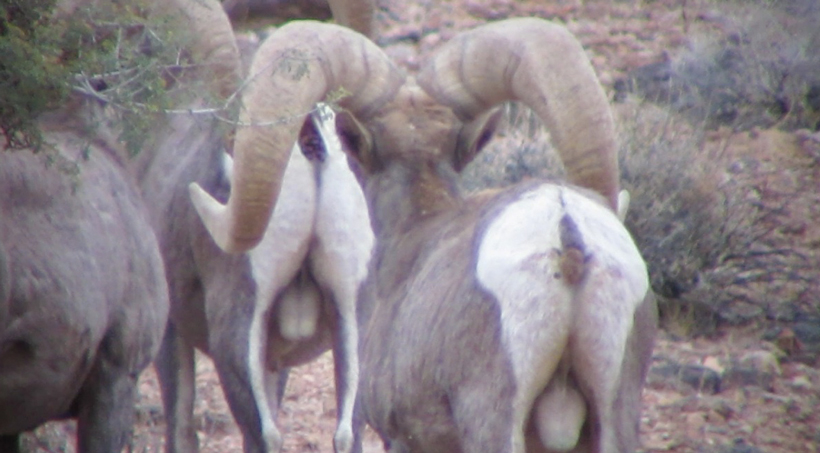 After an hour or so of watching, the rams moved together. Handing Parks the binos, I asked him what he thought of the other two big rams now. Parks replied, “They don’t look that big now.”

We told him that was because the other ram was huge. At that point, he said, “Well, you guys are the experts and if you say we should shoot him, then let’s do it.” We all breathed a sigh of relief because we were over the first hurdle. We just did not realize then how many more we would have to overcome. 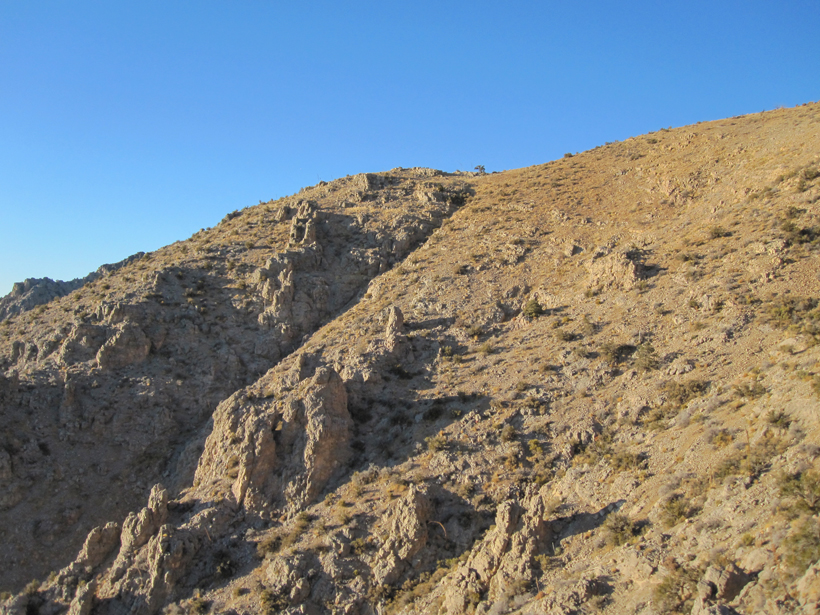 We watched the rams for several more hours because they were not in a good place to stalk. One of the biggest mistakes hunters make is getting in a hurry. Sometimes the best thing to do is nothing. Once the rams got in a good spot, Joe and Parks began their stalk while Rick, Chris and I waited at the vehicles to keep an eye on the sheep. By now we had glassed over 20 rams in the area, which is a lot of eyes, noses and ears. About halfway to the sheep, another ram that had not been visible to us came out of a canyon and looked down. He saw Joe and Parks on the stalk and had them pinned down. This ram was a borderline Boone and Crockett ram and when he spooked, he spooked the rest of the sheep. While most of the sheep with the big ram went down the canyon and out of sight, the big ram and two others went up and joined the ram that had busted us. The four of them started to climb towards the top of the mountain.

Then things got really weird.

Two military helicopters appeared flying extremely low and started to circle Rick, Chris and me. I immediately started to worry that it would spook the sheep because they were getting more nervous by the second. I started waving one arm at the helicopters trying to tell them to leave, but much to my dismay they thought I was in trouble and trying to signal for help. I guess my sign language needs a little work. One of the helicopters landed behind us while the other kept circling right over the top of the rams. The helicopter that landed made so much dust that we could not even see the mountain. Chris went over and talked to the guys that got out and told them we were stalking a ram. They felt terrible. They said they fly out here all the time and had never seen anyone out here in the middle of nowhere and thought we needed help. 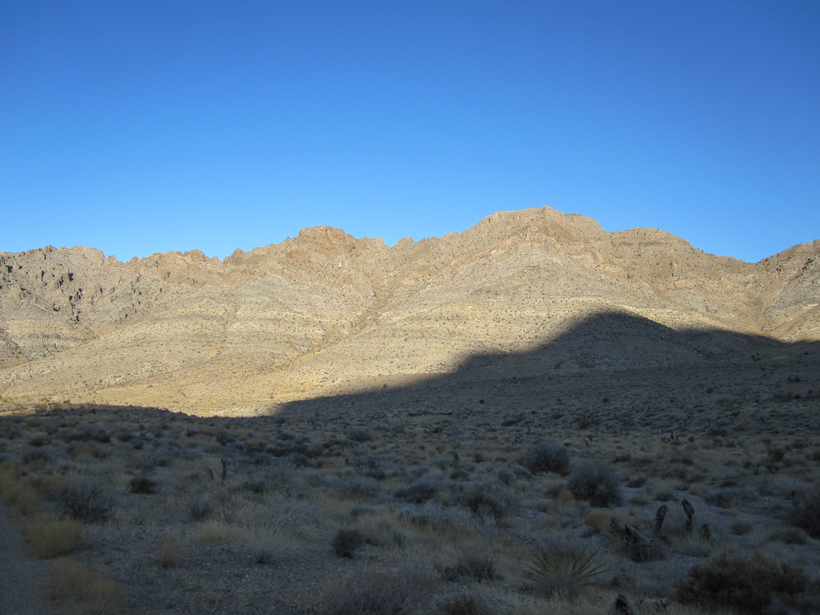 After they left, the sheep went almost to the top of the mountain and then disappeared into the next canyon. Joe and Parks continued up the canyon and I drove Chris all the way around to the other side of the mountain so that if the rams crossed over, he would hopefully be able to keep an eye on them. Then I headed back to Rick.

A couple hours after I got back to Rick, we heard a shot and then a few minutes later Joe called and said that they had missed the ram. We all had that sick feeling and thought that we would never see the big ram again. It did not help that none of us could find the rams again for several hours. Finally, just before dark, we found them and watched as they went over the top of the mountain. 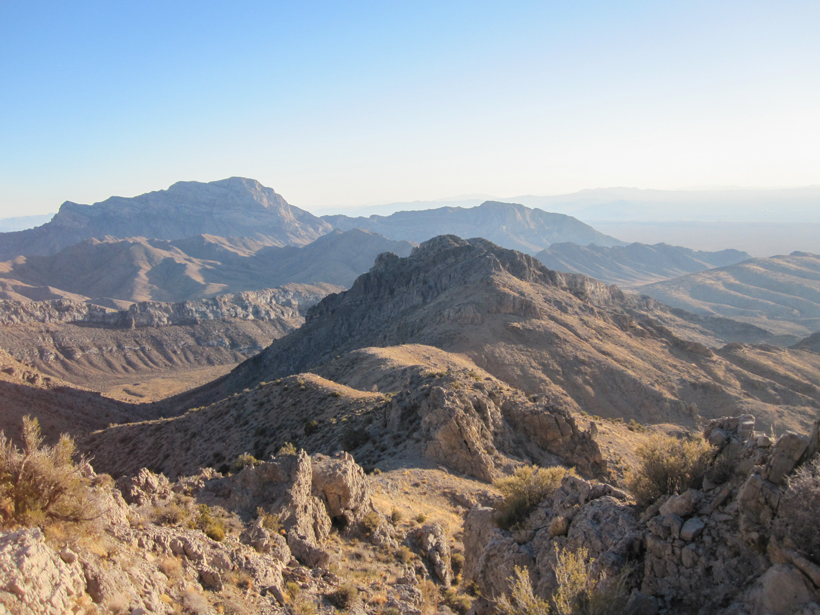 The next morning Joe, Parks and I went to the other side of the mountain while Rick and Chris went back to the original spot just in case the rams came back over. Shortly after daylight, we found the rams and were able to get Parks to them. This time he made it count with one shot doing the trick. 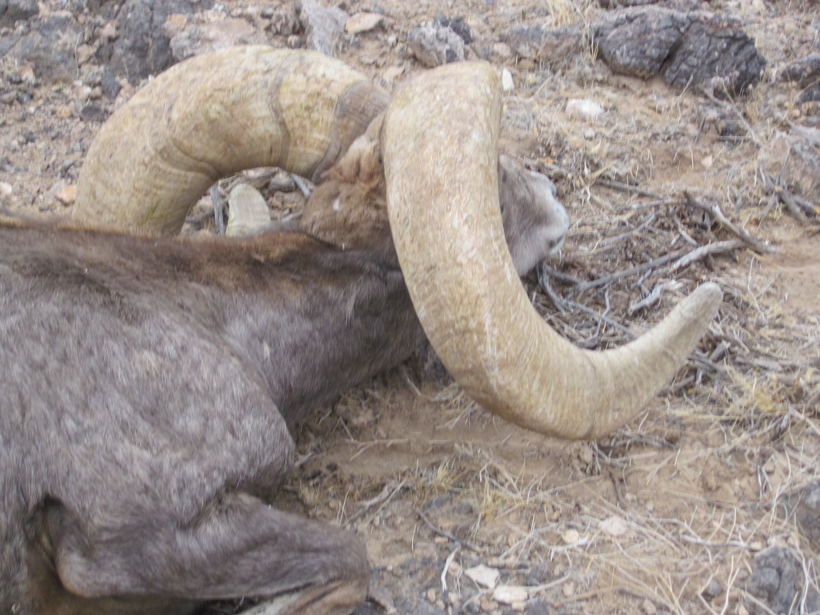 Joe and Parks went to the ram while I went back to a high spot on the mountain in order to get radio contact with Rick and Chris on the other side of the mountain. I told them to come on over. 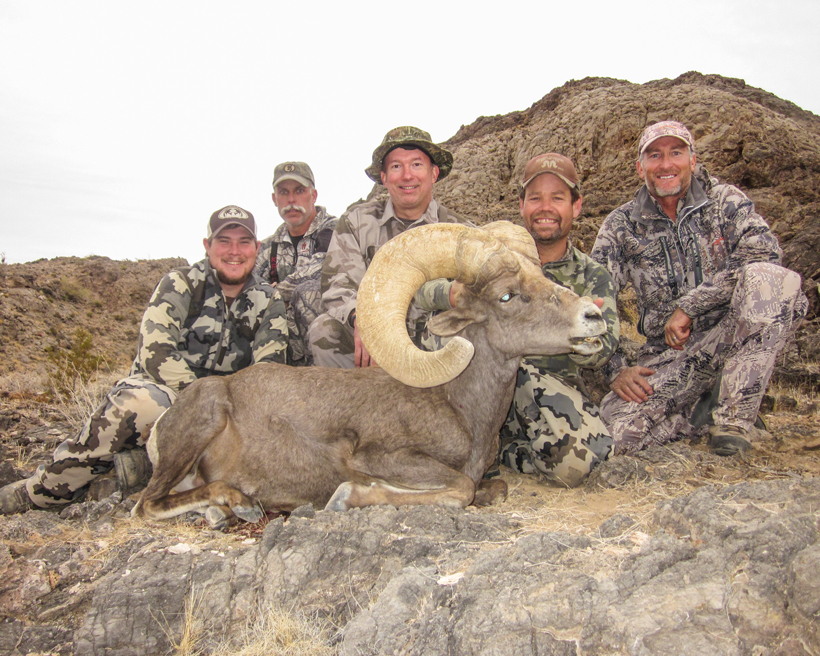 When we all got back to the ram, Joe told us that the ram was well over 180 inches. We all knew that we had been part of something really special. For Joe and Rick, this was their second time being involved in taking a desert ram of that caliber in Nevada. Joe drew a tag in 2008 and took a ram that was 182 2/8 inches. I think Joe and Rick are probably the only two people who have been involved in the taking of two rams that big in Nevada. 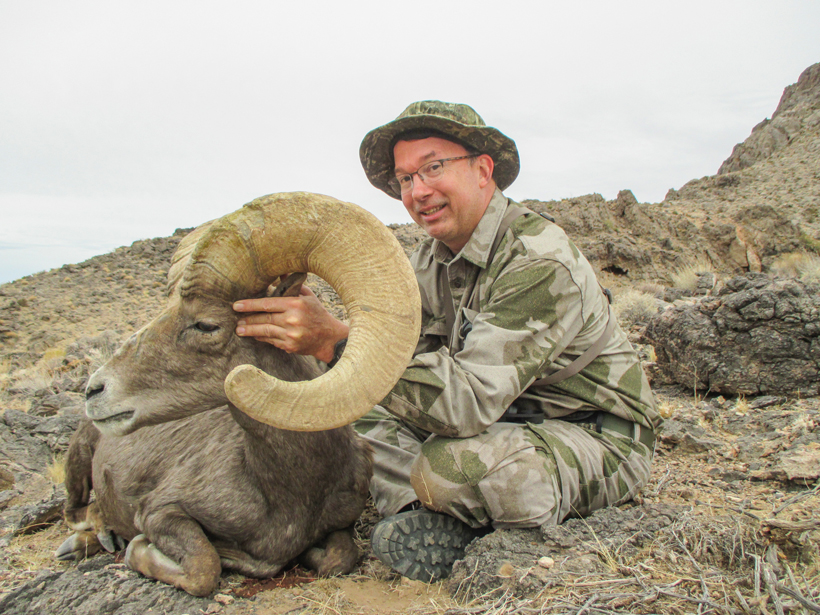 Parks’s ram officially net scored 184 5/8 inches, making him the fourth biggest ram ever taken in the state of Nevada. I do not think Parks realized what he had accomplished. 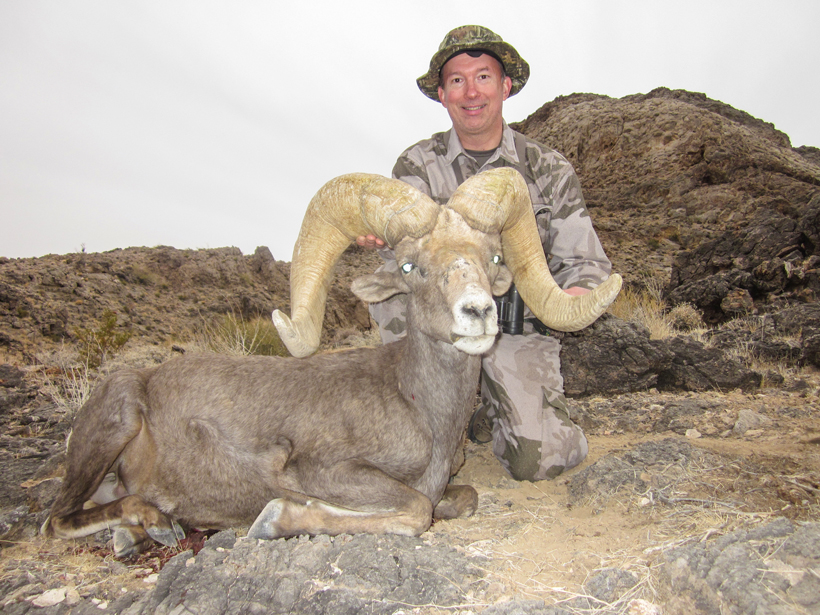 To put things into perspective, I told him that there has been more 260 inch mule deer taken in Nevada than sheep that big. 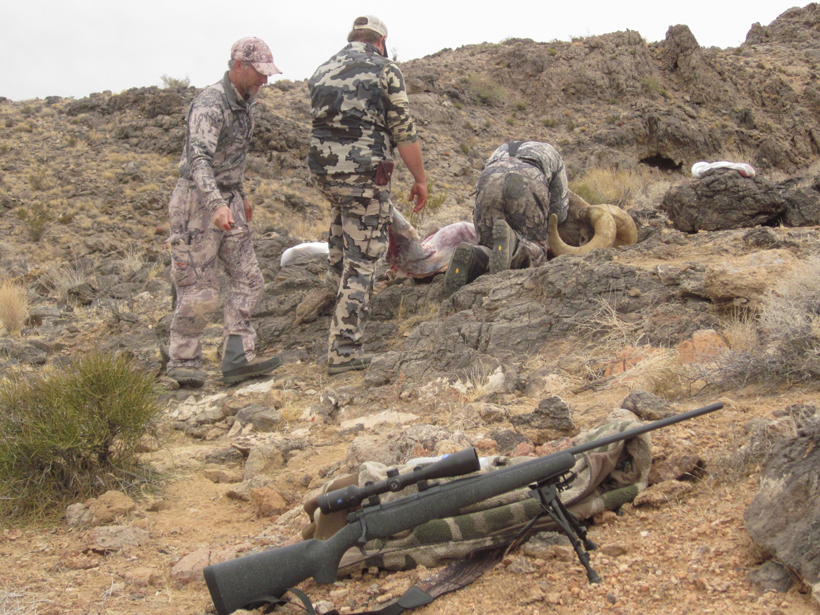 At that point, I think that it really started to sink in. Thanks to Greg Krogh for the referral and Parks for letting our team be a part of his hunt.

Enjoy a short video clip of the ram: