Once in a lifetime DIY Montana sheep hunt 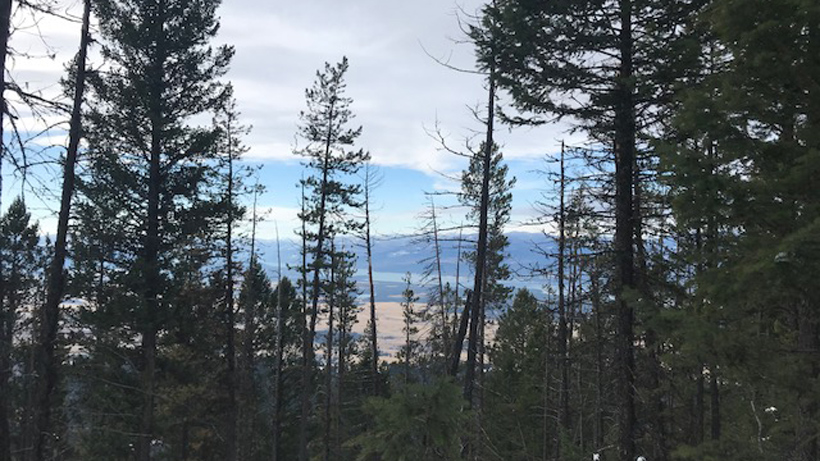 My soon-to-be father-in-law drew a sheep tag up in northwestern Montana. He and I hadn’t spent a lot of time together, but when he drew that tag I told him that I would be there. We planned the hunt around the middle of November in hopes that we would be able to catch bighorn sheep as they were moving to lower elevations (per the recommendation of the local biologist). We had completed some reconnaissance, but really had no idea what we were getting ourselves into.

We left on a Sunday and planned to spend nine days on a do-it-yourself (DIY) hunt in a small town about six miles south of the Canadian border. We showed up at dark and set up camp in town. The next morning was a real eye-opener. We stepped out of the camper and saw mountains so covered in trees a person would have a hard time spotting a hunting partner let alone a critter. On top of that, there were a few fresh inches of snow where the tree line ended. We decided to do some exploring anyway, but, by the end of the day, that turned up no better results. At last light, we decided to check out a wildlife refuge that was recommended to us by the biologist to hunt on. Sure enough, we found a few bighorn sheep that included this big boy here, eating someone’s well-manicured grass. The problem was that the area was surrounded by homes and none of the bighorn sheep seemed to have any desire to be anywhere else. So, we headed back to town and decided to try some more exploring in the morning. 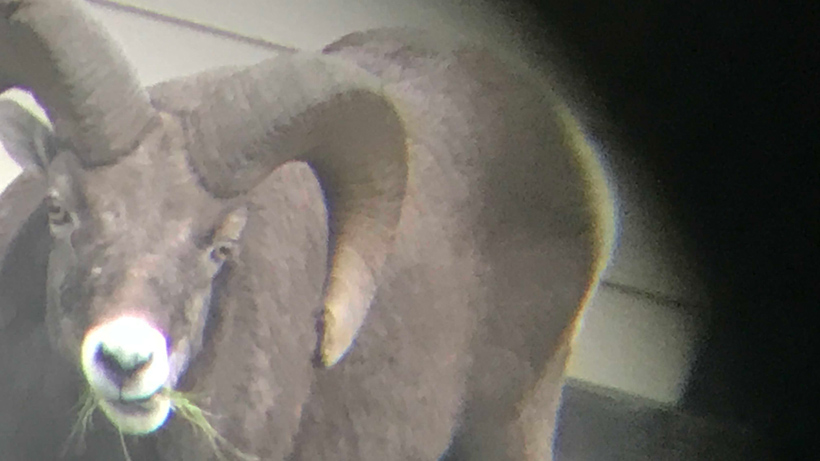 We set out on a 12-mile hike that ended in a very disappointing sighting of more trees. We got a tip from a local who told us about a valley we could hike to but we would need a four-wheeler to get there. The RZR didn’t make it within 10 miles of where we needed to be before it was stuck in the almost 3’ of snow. On day four, a few of our friends drove up to join us on the hunt. They stopped in at a local bar to wait for us to get off the mountain and met a man who eventually introduced us to an old local. We were told that if you want to find bighorn sheep, then you talk to this guy. We arranged a meeting with the old man at his home that evening. After getting lost and agitated for a better part of an hour we tucked our tail between our legs and called him. He told us, “Boy you Idaho boys don’t follow instructions very well… sit tight I will come to find you.” Shortly after, we were sitting in his living room having a cup of coffee. You would not believe the stuff this guy had on his wall. He had a story for every one of them and we spent a few hours going through his huge collection of pictures in awe.

The next morning we met him for coffee at a local restaurant and he drove us up to a private landowner’s house to get us permission to cross his property. He got us permission and the old man showed us where to go. I am 28 years old and I had been training for a bighorn sheep hunt; my father-in-law and his friends are around 50 and they did not train for a bighorn sheep hunt. We hiked up an easy forest service trail for about two miles when things started getting rough. The trail managed to disappear after the fifth or sixth blow out. We were crawling over trees, under trees. Hey, there’s the trail! Wait! I think we missed it! Then the snow started getting deeper. After about mile four we decided to head back. I will admit that I wasn’t loving the hike myself. 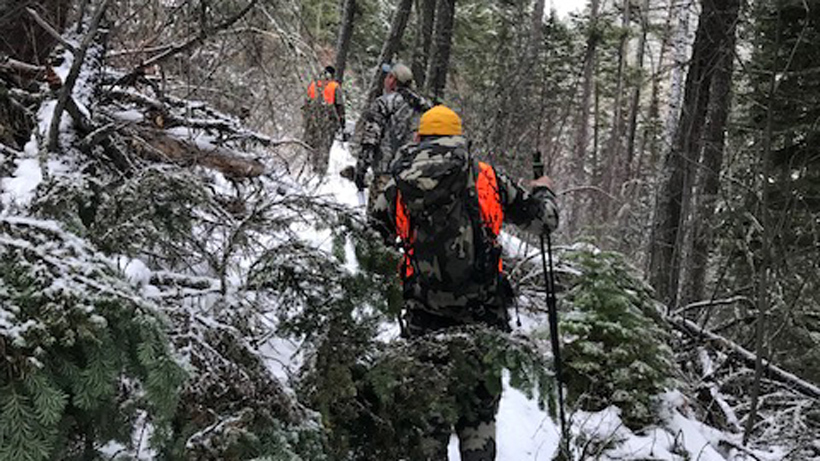 The old man said, “Yeah, been about 15 years since I been up there.”

We tried several other places he sent us, but never saw any signs of bighorn sheep. We were starting to get pretty discouraged as the hunt was ending in about three days. We decided our best bet was to go back to the animal refuge near the border to see if we could find a few bighorn sheep moving down from the high country. Again, we spotted every one of the bighorn sheep in someone’s yard. On Sunday, we got a break and watched a few bighorn sheep toys with us, moving from the private ground into Canada where they eventually moved into the trees.

We decided to spend the next day there, hoping to catch them moving. We spotted this guy again and he was in full rut chasing ewes and younger rams everywhere, but he never left Canada. We eventually decided we should go to town for lunch and try again in a few hours.

When we came back (we were about one mile of easy walking from the truck), the ram was still in Canada but a few ewes had moved onto the US side along with a young ram. We figured we had caught our break. My father-in-law started to put a stalk on to hopefully catch him as he came back across. Everything was going great until we heard a truck coming up the road on the Canadian side. We couldn’t believe it when Canadian Border Patrol jumped out of their SUV running towards us. We were told that we were on Canadian soil, we were hunting illegally, and we were carrying a gun illegally. After about 15 minutes of arguing with the two, they allowed us to walk them to a sign that said “Canadian/US border.” We were on the US side. They then decided to call Montana Fish, Wildlife and Parks (MFWP) to make sure we weren’t hunting bighorn sheep out of season. Because there was only one tag issued in the unit, the MFWP officer knew who had drawn the tag and made sure we were all wearing orange per Montana State law. We were crushed as the two drove away. The bighorn sheep had moved rapidly into the Canadian forest and we were positive they would not be back.

Nonetheless, we got up the next morning, hoping to catch a straggler coming down from the high country. This was the last day we could be there and we were putting a plan together to try and come back up. The season closed in 12 days, but one of those days fell on Thanksgiving and it was an 11-hour drive from home. We walked quietly into the refuge and spotted a few rams in the surrounding area on US soil, but no shooter rams. After sitting and watching for about an hour, I happened to notice a big bodied sheep walking through the trees behind us. It was the big boy! I signaled to my father-in-law while we all tried to keep our composure and without even blinking he headed for a fallen tree to set up. The ram walked through the trees and, in my opinion, into the largest opening in the entire unit and stopped broadside. I heard a single shot and watched the ram arch his back, run 30 yards and fall over. 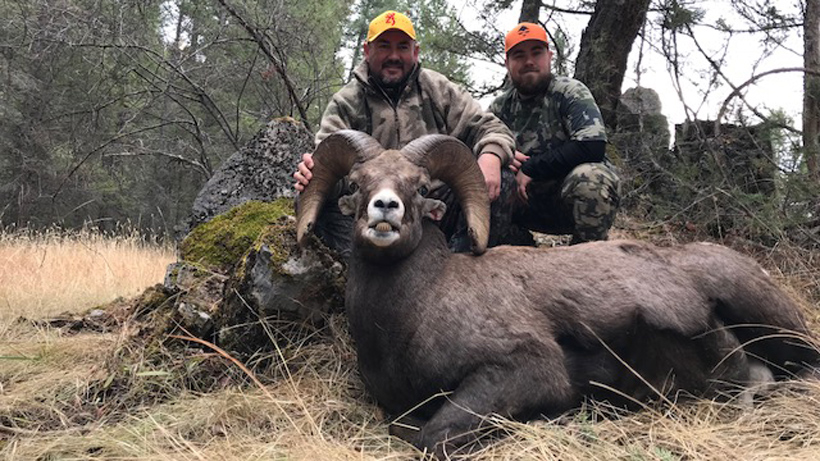 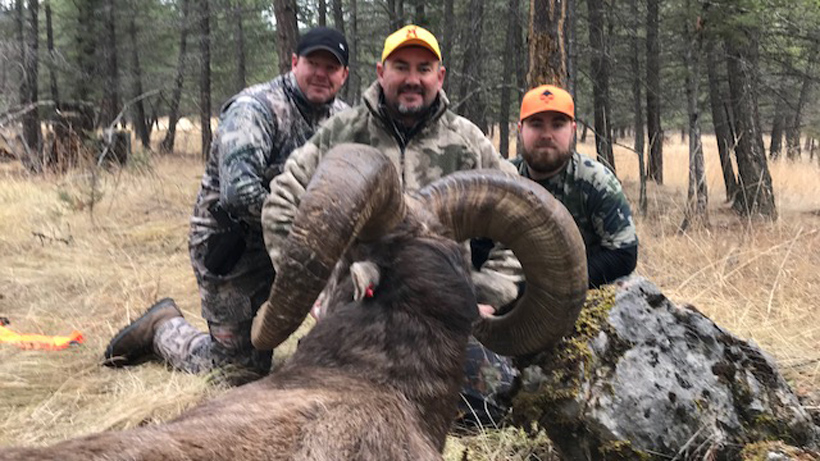 We were actually closer to the truck at this point. We grabbed an old fallen tree and tied it’s feet up to it to pack it out. He hasn’t been officially scored, but, if I recall correctly, it was about 165” per the Game Warden who checked him in. It's a hunt I'll remember forever! 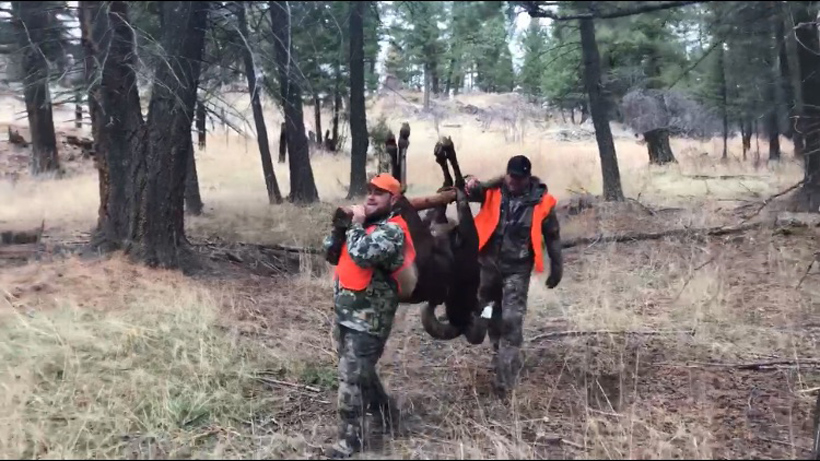