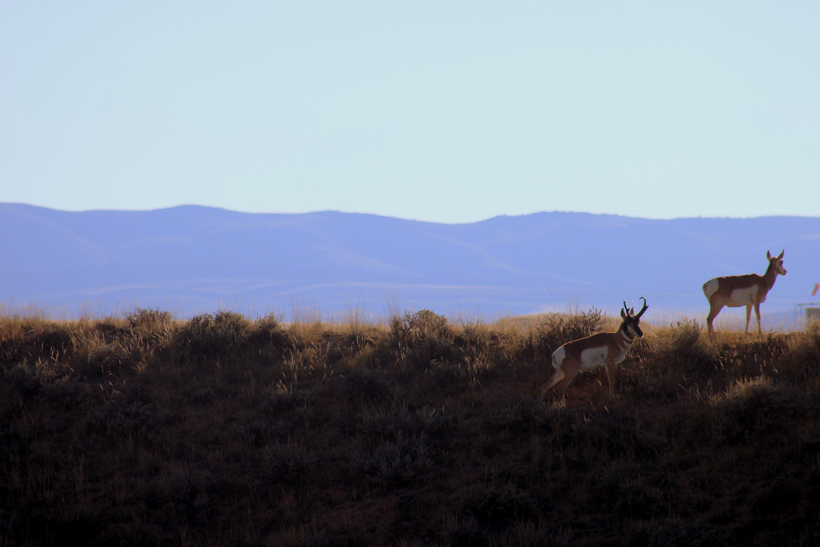 This story begins in June as the 2014 draw results were posted online and I found out that I drew a really good late season deer tag, an elk tag that has taken me seven years to draw, and an antelope tag. After calling around and telling everyone, I started planning my elk hunt with my good friend, Bryan, since we had drawn the elk tag together. Bryan had been applying for the last ten years which made us happy that we drew the tag this year. In Wyoming, antelope archery season opened first, beginning on August 15, which gave us three weeks to hunt antelope before elk season began. 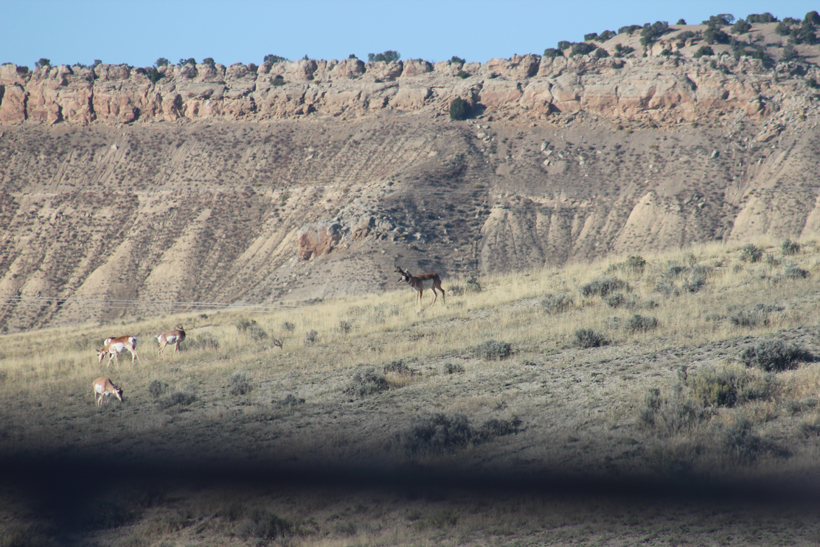 Opening day for antelope was finally here on Aug. 15. We headed out to our normal spot to see if we could find any antelope, but after covering a lot of ground, we saw a few bucks that were not quite what we were looking for, so we decided to head home and try again a few days later. On our way back home, we stumbled upon a small group of antelope right off the road. Surprised, we decided to pull over and have a look at the group. I peered through my Vortex binoculars at the bucks and my jaw dropped — I just spotted the buck of every hunter’s dream. He had it all: mass, character and big prongs. As we watched, the buck and his does ran back into a big open flat, but I knew there would be no way to get on them with a bow. I decided it would be best to wait, leave him alone and head back after him in the morning. 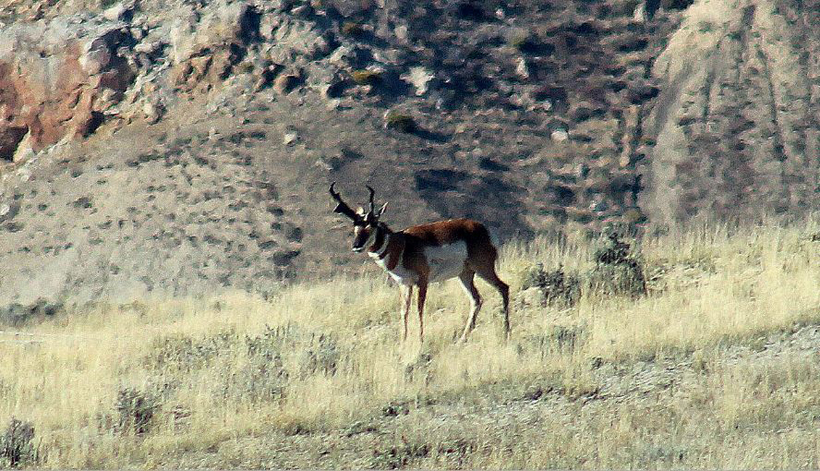 The next day I headed out to look for him. I decided to start where we left off the day before. About half a mile down, I spotted a few does bedded in the sagebrush. To their right, I was able to see my buck, without even pulling out my spotting scope. I walked down the draw and circled around the bedded buck. I was within 100 yards of him when I nocked an arrow. I got within 40 yards of where he was bedded down, drawing my arrow and rising up for my shot. I knew that it was now or never. Out of the corner of my eye one of the does stood, looking right at me. As I stood for my shot, the doe blew out of the area and the buck exploded out of his bed, running out to 85 yards before stopping. Luckily, I shoot at 80 yards all of the time, so I felt comfortable with the shot. I aimed and let the arrow fly. The shot fell short and landed right under his brisket. The herd tore off into the big flat again, but this time they did not stop. I found my arrow and was sure I would not see him again. 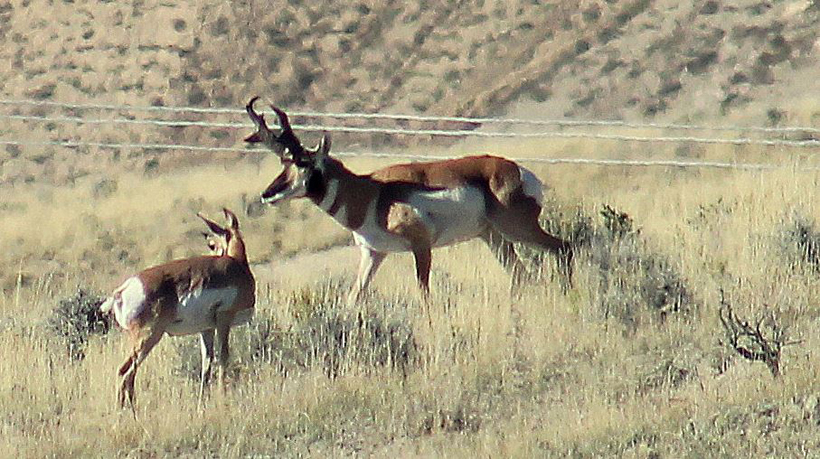 A week later, I was back and starting again where I saw him last. The antelope disappeared along land where there were three long finger sage brush ridges with green flats in between them. I started with the first green flat, but saw nothing. Figuring that I chased the buck out of the area, I headed to the top of the second ridge. Low and behold, there he was with the same four does, feeding on the third ridge and bedded down toward the top of it. I wasted no time and circled him again — this time going further around him and taking the better part of an hour. I got to my spot, nocked an arrow and started to rise up to locate him. He was 80 yards away and looking right at me. This old buck was smart and knew I was there. I do not know how he knew, but he did. Once again, this sent him off into the flat. 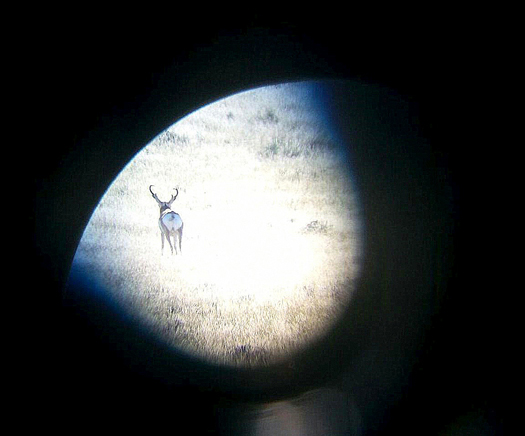 Unfortunately, I went through this same spot stalk and fail another six times throughout September. By now, the elk were getting fired up in the mountains, so I started splitting my weekends between hunting elk and antelope. I had it set in my mind that it was either the big antelope, or nothing. My youngest son likes to name all of the animals that I hunt and he named this special buck, “Big Boy.” The name stuck and I had Big Boy on my mind a lot, even when I was chasing elk.

Elk season was good. I called in several bulls and passed on eight different bulls that came into bow range because none of them seemed to be what I was after. Bad weather in September caused us to head in early a few times from elk hunting, switching tactics to search for Big Boy instead. He was always on those same three ridges, but each time I saw him, he picked up a few extra does which made it that much harder to get near him with a bow. I decided to take the last week of September and the first part of October off from work, so I would have 10 days to hunt. I was planning on elk hunting during those 10 days with Bryan, but after a few days of bowhunting elk without much luck, we were hit by a snowstorm. After that, I decided to head home for a few days to look for Big Boy while Bryan chose to stay up on the mountain with his wife, who also had a bull tag, and ride out the storm. Bryan was planning on coming home the day before October 1, which was opening day of elk and antelope rifle season. We had discussed it and decided to hunt antelope on the first day of rifle season and elk on the second day. I was still after Big Boy and Bryan had a nice 80- inch buck picked out as well.

In anticipation of rifle season, I decided to watch Big Boy for a few days since he seemed to stay in the same ridge area. I made a call to my cousin, Jim Health, who lives in Cody and told him about my antelope and texted him a few live photos. I estimated the buck to Score around 84" and Jim showed interest in coming down for the hunt so I invited him and his Son Tristan to join me. 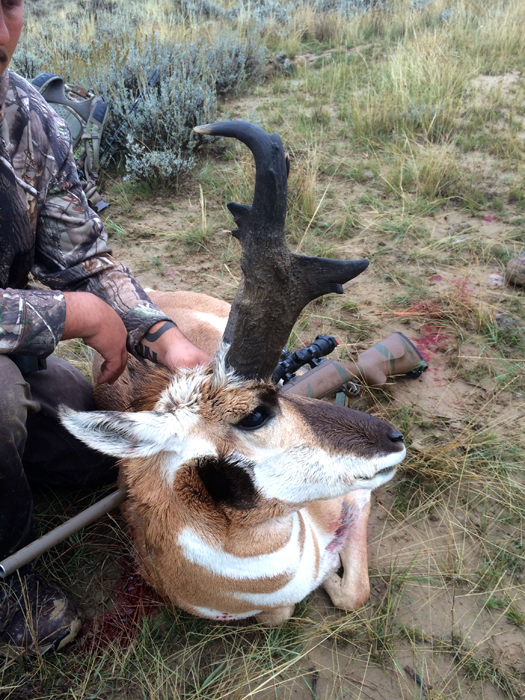 The morning of opening day, I was awake by 4 a.m. It was pouring rain. My cousin, Jim, and his son, Tristan, were driving up to join me on my pursuit of Big Boy and arrived after 6 a.m. Right away, we began to hike in the rain, checking the three ridges. Big Boy was on the third ridge about 750 yards away. We moved to the edge where we had a good view of him at about 275 yards. I opened my shooting stick and took aim. Big Boy was thrashing some sage angled away from me. 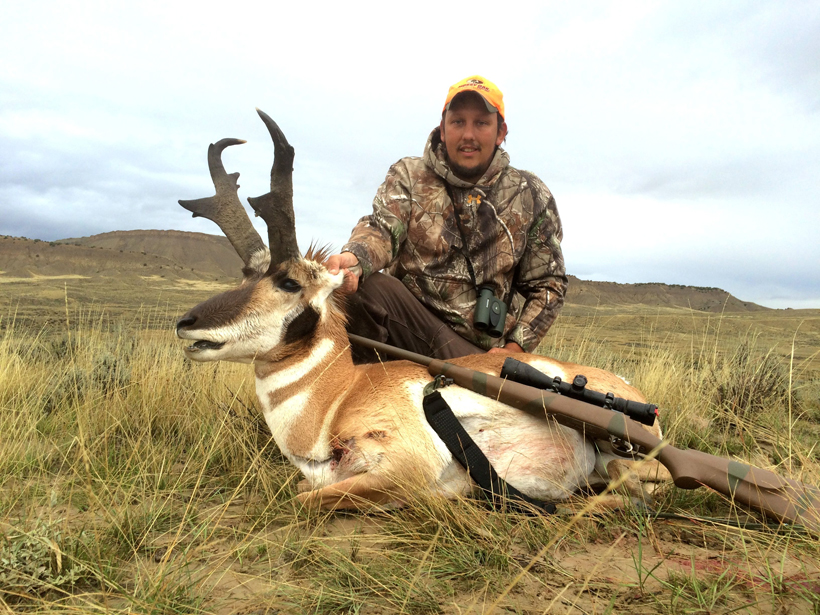 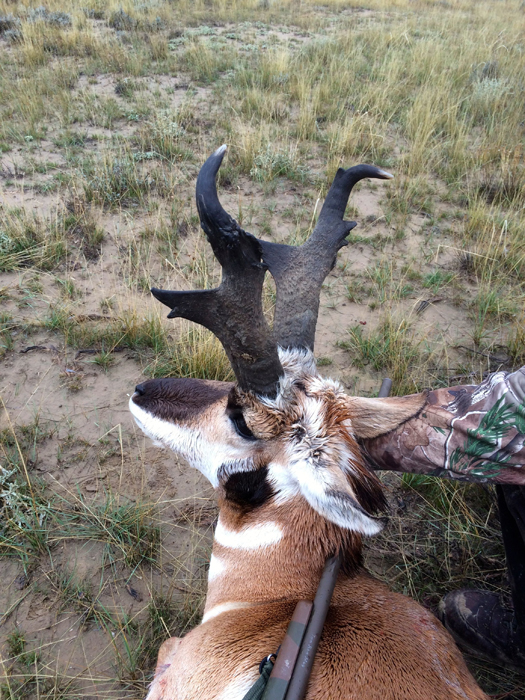 We walked about 50 yards and could see the buck laying on top of the ridge. He seemed to get bigger and bigger as I approached where he fell. He was much bigger than I thought he was. We were all in shock at the pure mass of this buck. 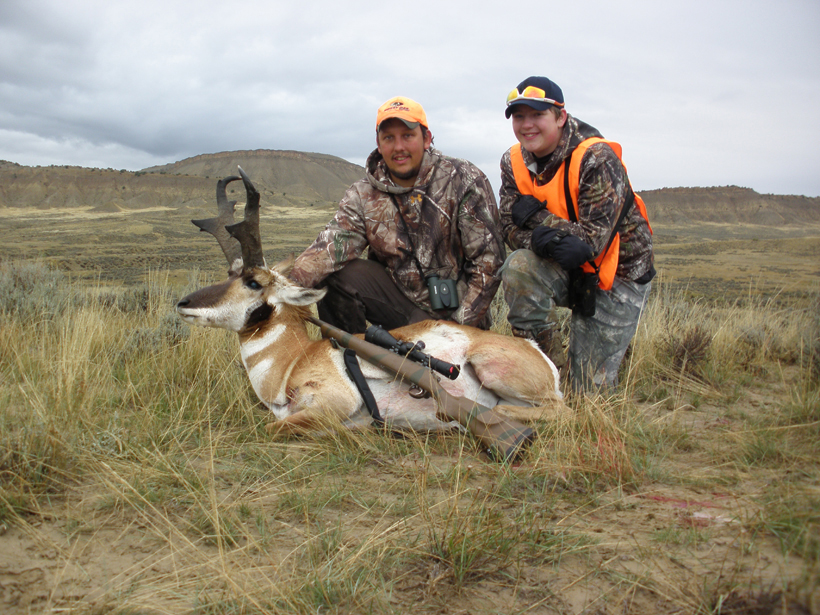 After I got the buck home, I had him officially scored for the SCI record books. He scored 88 ⅞” SCI. I am extremely happy that I decided to stay home to hunt Big Boy on that day. 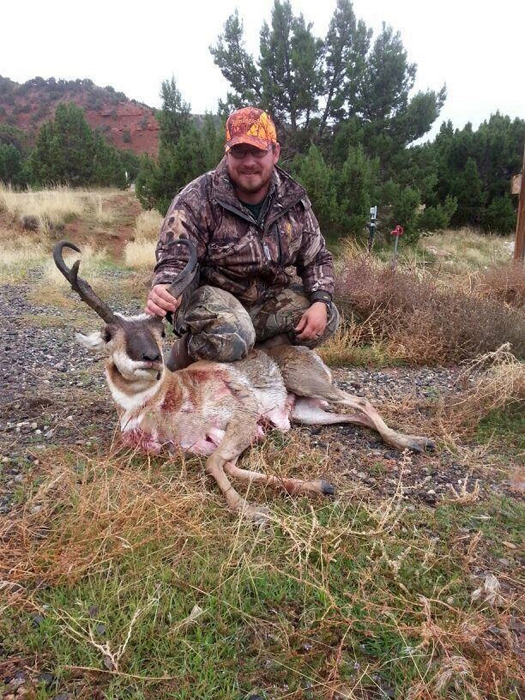 Bryan, also ended up harvesting his big antelope that morning, so we headed to elk camp the next day. 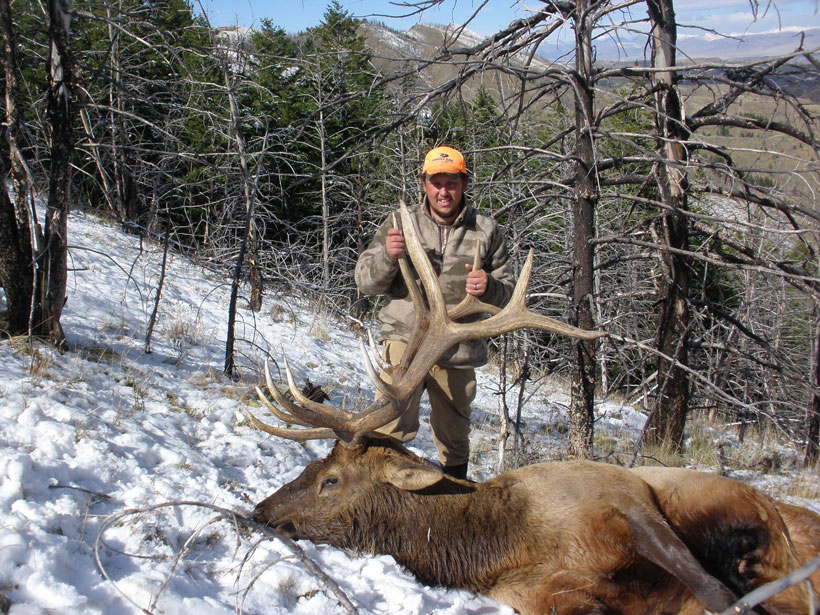 My luck stayed with me because the day after my exciting antelope hunt, I shot a nice 320” 6x6 bull elk at 620 yards. 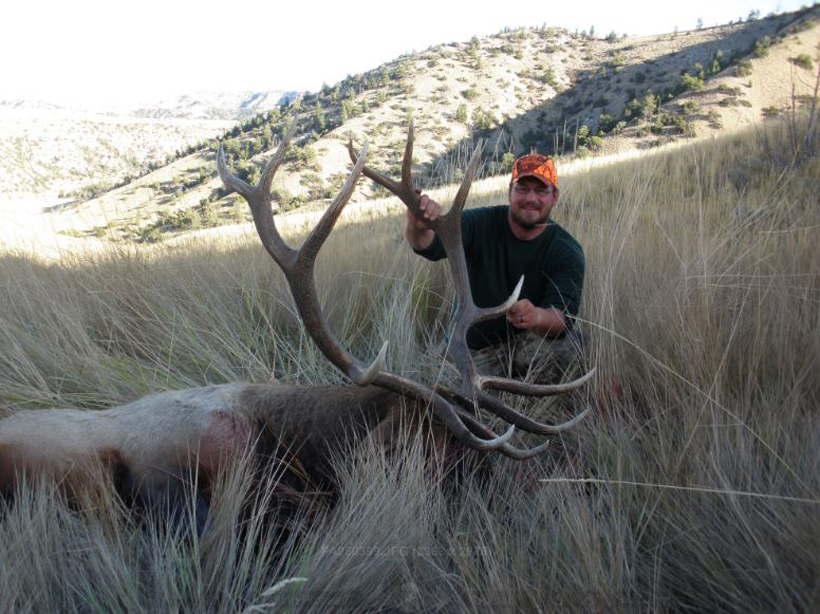 Bryan also shot a 310" bull on the hunt, his largest elk ever . These were the best two days in the field I have ever had.

I want to thank Jim and Tristan Heath for taking the time to come help me with this once in a lifetime trophy and I cant wait for our next hunt together.