Making memories hunting with my boys 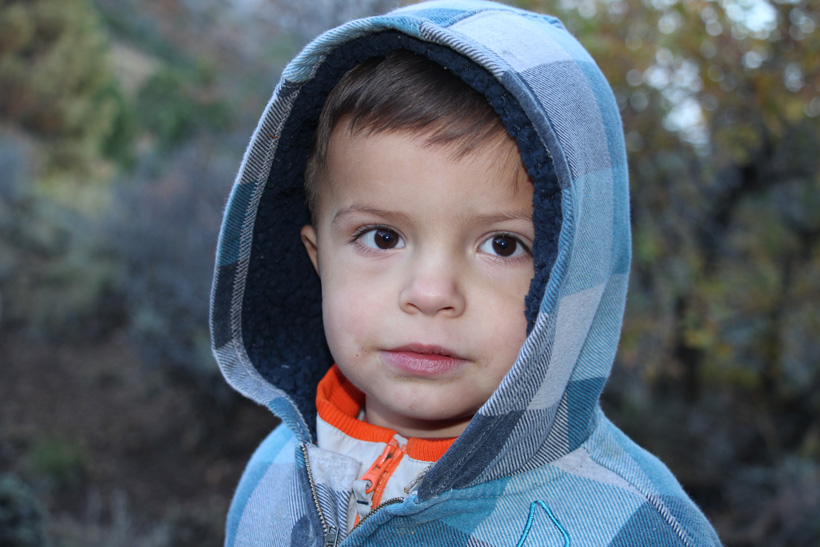 I am fortunate to spend a number of days in the field every year chasing animals in the West. Many of the remote areas I hunt don’t allow me to bring my young kids along for the hunt, but my 2015 Utah mule deer tag was different. I had a tag for a unit very close to home with good access that would allow me to bring my 10-year-old son, Mckoy, and my three-year-old son, Maverick.

We started scouting for this hunt about 10 days before opening day. We would drive up the mountain and I would glass from different areas. As you can imagine it was a little tough to keep both of the kids quiet. They would spend much of the time throwing rocks, chasing each other, screaming and, of course, asking me the same question over and over. Even with all of this going on we were able to find a couple of good bucks, but nothing to get excited about.

With my busy work schedule at goHUNT and the recent release of goHUNT’s Filtering 2.0, my scouting had to be done after work or on the weekend. Many nights found us spending one to two hours glassing from various spots. The night we found our buck was very cold and the kids quickly decided glassing was for the birds and headed back to the truck to wait for their very sick in the head dad that doesn’t think anyone should stop glassing because it is cold. After about ten minutes, they started honking the horn and it was obvious it was time to leave. As we were driving down the mountain I decided to stop and glass a very thick transition area that bucks use as they are leaving the higher elevation summer range and moving to the winter range.

It was getting dark and I didn’t expect to see much in the thick transition area. I jumped in the bed of the truck, attached my binos to the tripod and started to glass. Immediately, I had eyes on a very big buck. The brush was so thick that I couldn’t see both antlers at the same time. I would see his left side and then his right side. Instantly, I knew he was heavy and carried his mass to his tips. He also had deep dark forks, but I couldn’t tell how wide he was. His eye guards were long and he had the look. I was very excited. This buck was in such a thick area that no other hunters would want to hunt it. We watched him until dark and then we went home.

For the next week, I looked for this buck after work. I glassed from a dozen different angles trying to find him in the thick terrain. I did not see him again. The night before opening day, I was again with my boys glassing for the buck. We glassed for two solid hours and didn’t see a single buck. My hunter instinct was telling me he was still there and that I needed to be patient and let him make a mistake. This is easier said than done. It is tough to look at trees every day hoping that the big buck is still calling them home.

Opening day was more of the same. We glassed all day for the big buck. We saw a few deer but not the one we were after. I had a great time with my sons. We threw rocks, shot BB guns and ate a lot of food. So many of my hunts are gnarly backpacking hunts; it was a refreshing change to spend some time on the mountain with my boys just hanging out. As day one came to a close we didn’t see the big typical but we had a great time together. 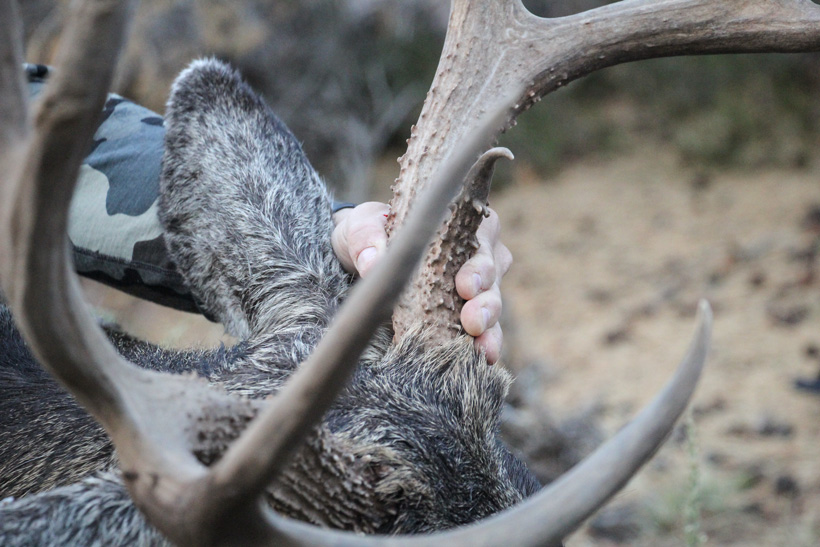 Day two started with cold wind and rain. I knew right away that we would be severely restricted to road hunting because of the weather conditions. We spent the morning driving around in the truck, looking for a really dumb deer to run in front of us. By mid-morning, the fog was so thick that we raised the white flag and headed for the camp trailer. We spent most of the day watching movies, playing board games and eating more food. It was a lot of fun and time spent with my boys that I will not soon forget. 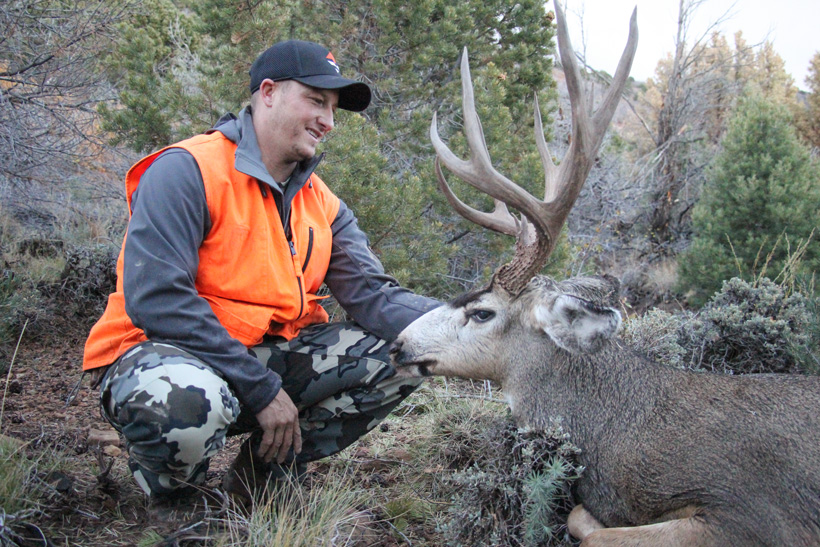 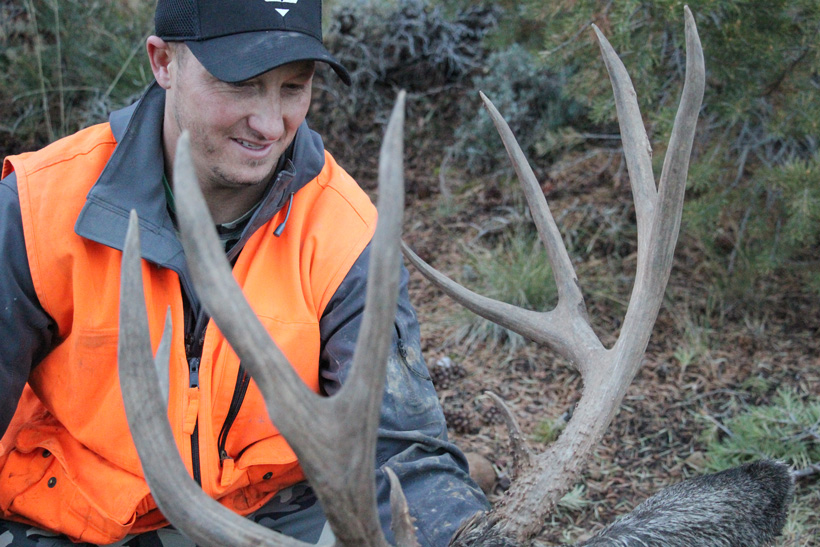 It rained all day. As the day passed, I started to get restless. I wanted to be out in the field hunting even if it was raining; however, I knew that there was no way Maverick could handle the freezing rain. Finally, about an hour before dusk, the storm broke. Having cabin fever, I looked at the boys and told them to get dressed because we were going out for a quick evening hunt. They quickly got dressed and we were off. 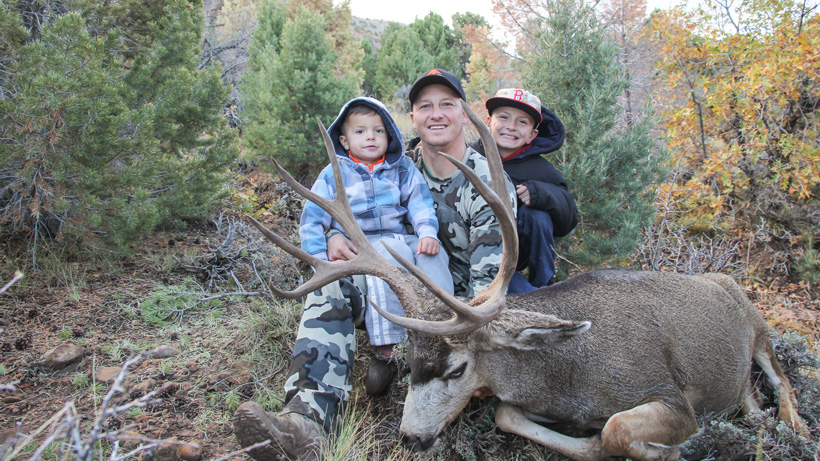 We headed directly for where we had seen the big buck a week earlier. The rain had stopped and we were seeing deer everywhere. I had that feeling that we may catch this buck with his guard down. As we turned the corner on the muddy dirt road I caught a glimpse of something out of place in the thick scrub oak and juniper hillside. Instantly, I knew it was the rear end of a deer. Throwing my Zeiss binoculars on him I could see his antlers. It was the big 4 point. The hillside was so thick that the buck stood there in hopes that we wouldn’t see him. I quickly chambered a round and dropped him. 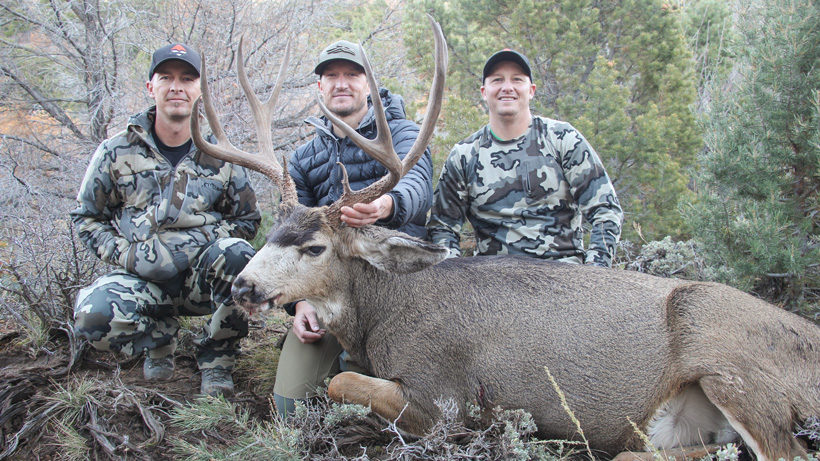 Five minutes after I dropped him, a giant lightning storm rolled in. Lighting was popping all around us and at one point hit the hill about half a mile away from us. We once again retreated to the trailer to wait until the morning to retrieve the deer. I called a couple of good friends, Trail Krytzer and Steve Barker, and they met us in the morning to retrieve the buck. 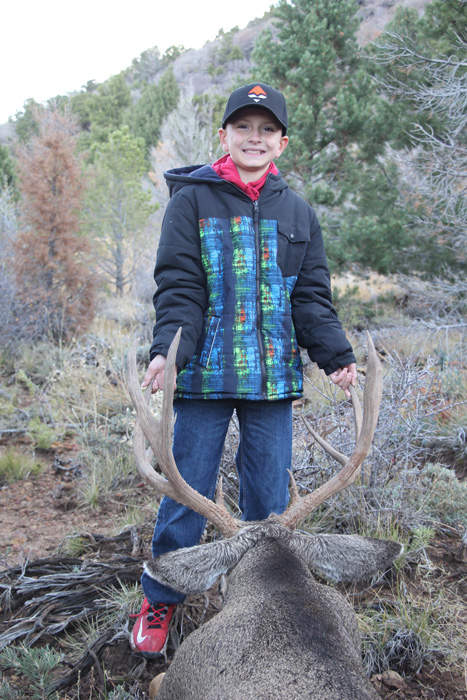 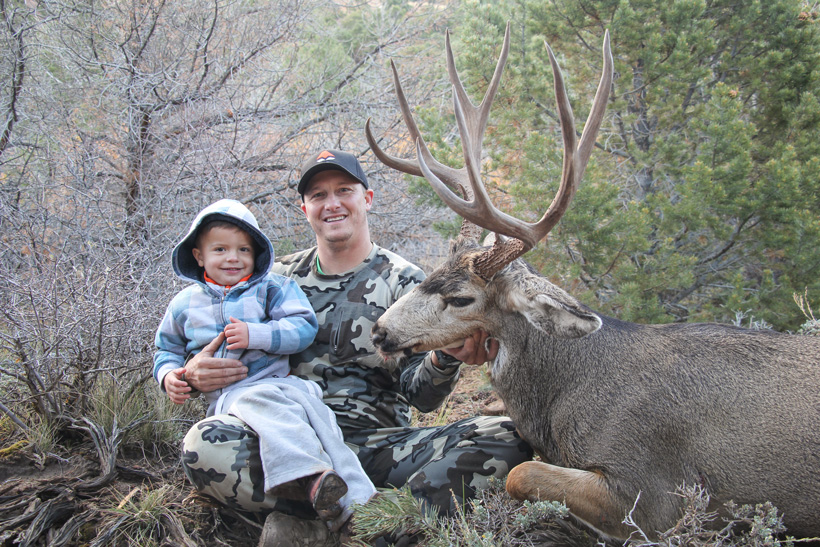 This buck is one of the prettiest typical 4 points that I have in my collection. But what makes him stand out from the other trophies is sharing this moment with my young boys. The memories that I made with my boys that weekend will last a lifetime.