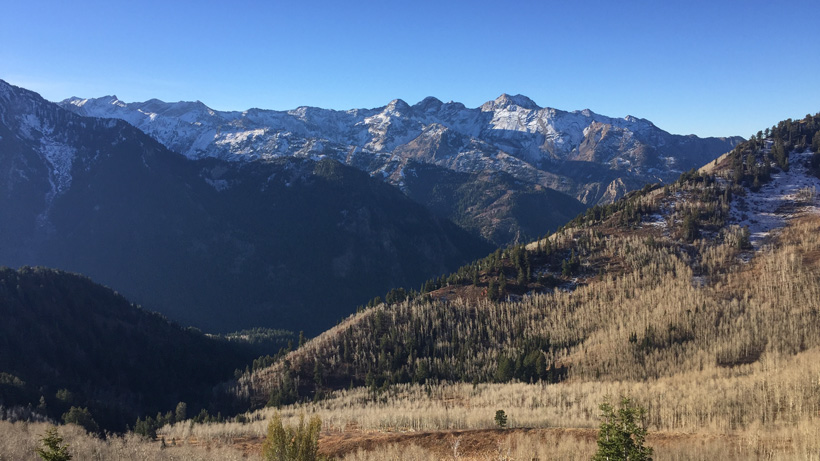 When I got my draw results for the 2016 hunting season—and they were unsuccessful—I was in shock. All of my dreams of chasing a giant mule deer vanished. Yet, as I did my research trying to find a way to get a tag, I discovered that, as a youth hunter, they have hundreds of tags leftover for almost every unit. This meant that all my brother and I had to do was go to Walmart at 5 a.m. and wait in line on July 14. Luckily, my twin brother, Nick, and I were the first people to obtain one of these leftover tags. 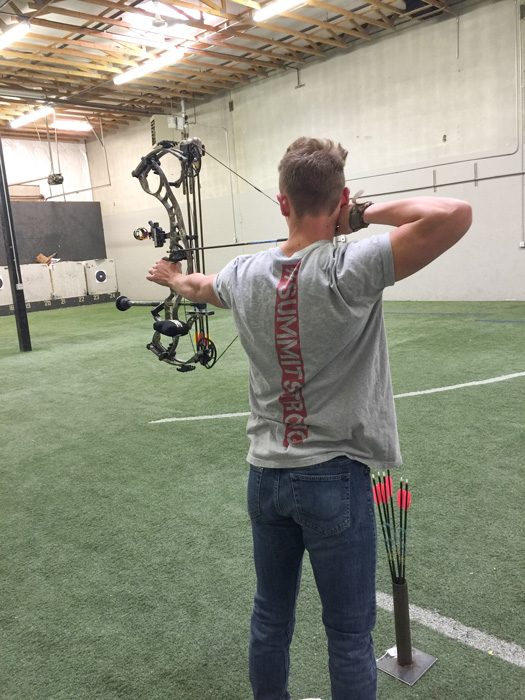 We were ecstatic to say the least. We had been shooting our bows all summer long anticipating this hunt. We scouted and hunted hard in our unit, but we just couldn't seal the deal on the stud buck that we were after. After our failed attempts in our general unit, we only had one thing to look forward to. In the great state of Utah, we have something called extended archery, which allows a hunter with any archery deer tag to hunt in a unit that is bordering Salt Lake City. In this unit, individuals can chase mule deer from Sept. 17 until Nov. 30. One of the extended archery areas is actually the famed Wasatch Front. It's steep, it's rugged, and it's hard to hunt, but this area holds some absolutely amazing mule deer. There is a lot of hunting pressure, but if you work hard enough it is very possible to kill a very respectable buck in this unit. This is where my story begins on Nov. 22.

I had my alarm set for 2:30 a.m., but, somehow, I ended up sleeping through it. It wasn't until Nick walked in my room at 4:30 a.m. telling me what I had done that I rolled out of bed, threw on my clothes and grabbed my gear. It was a 45 minute drive to the trailhead. It was a spot we have hunted quite often because it’s so close to our home. As we arrived at the trailhead, there was two or three other trucks parked there; which was fairly busy for a week day. When we got out of the car it was freezing cold and there was more snow than we had expected.

As we were getting out of the car an SUV pulled into the parking lot. It happened to be Martin Chagnovich, a guy who we didn’t know personally, but recognized from social media. As we were putting on our packs, Martin was all ready to go so we briefly talked to him on his way up the mountain. Martin went his separate way and, after a long steep hike in the snow, we finally got to our glassing point. It turns out Martin had the exact same idea because he was sitting in the glassing spot that we always stop to use. We talked for a second and then started glassing. Martin had already spotted several bucks in the basin; one of them was a buck that was pushing 190" but he had broken off his left side in a fight. 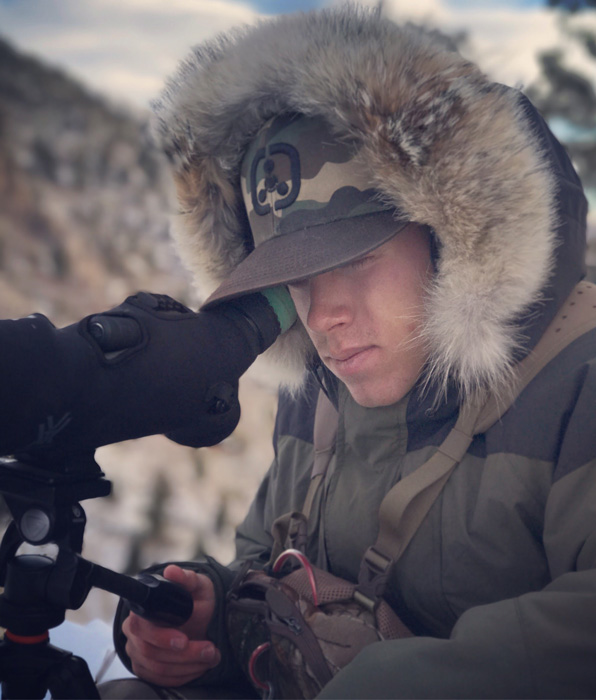 We looked on the other side of the basin and that’s when we saw my buck. He was up on the opposite side of the basin with another buck that wasn't quite as big but this buck was a little bit wider. Both bucks were pushing the same group of does. 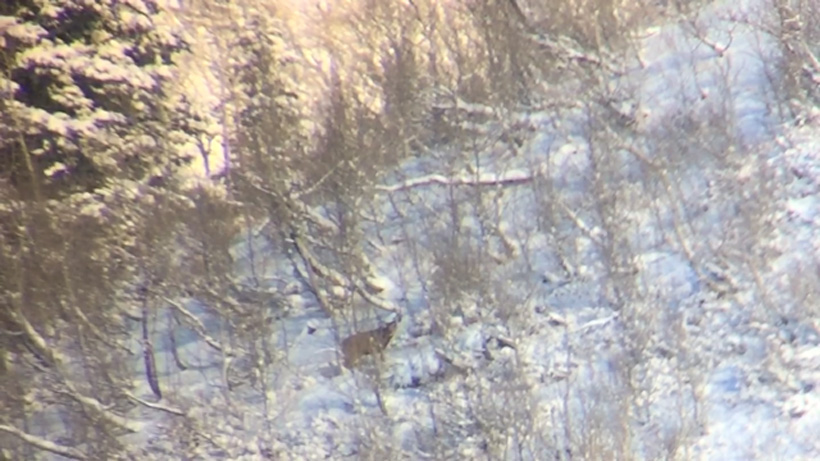 They were in a very killable spot in the basin so we made a plan. The plan was for me to go through the bottom of the basin and get up to the saddle. From the saddle, I would hike up the ridge nearly to the peak before traveling down a ridge that went south to where the deer were feeding. It was not an easy stalk because of all the snow and how steep the terrain was. In fact, it was actually incredibly tough. My brother and Martin were watching the deer. The plan was that they were going to guide me in on the deer via text message. But my phone didn’t want to cooperate and kept dying, which meant that I was going in on the stalk blind.

As I was about to go across the top of the basin at the peak, I realized that if I wasn't careful, the deer would see me. I waited for the clouds to roll in the basin and I worked my way across; this plan worked perfectly.

I made my way down the ridge that went south to the group of deer, trying to be as quiet as possible, which was fairly easy in the nearly 10” to 12” of fresh powdery snow. I was trying to remember where the deer were because I had no communications with my spotters so I couldn’t tell how close I was to the group of deer. All of a sudden, as I was making my way down the ridge, I spotted a small 2 point walking below me at 40 yards; he was pushing a single doe. I thought about harvesting this 2 point but I couldn't get myself to punch my tag on him even though the opportunity presented itself perfectly. 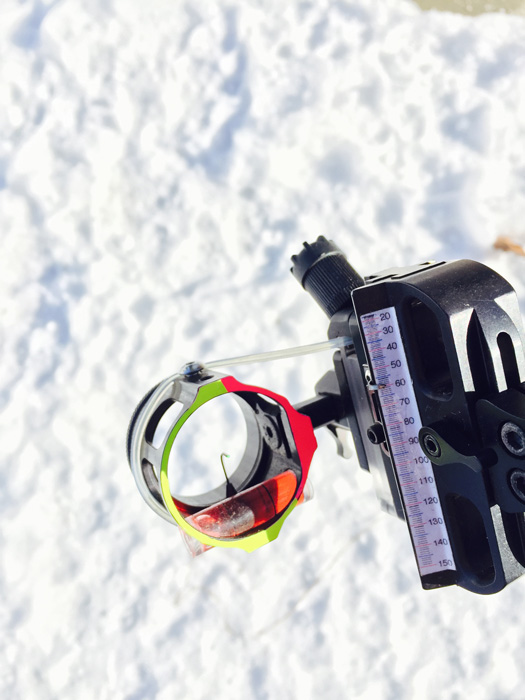 After the 2 point pushed his doe out of the area, I moved to where the 2 point was standing. I looked down and saw a group of does in a patch of aspens. I knew that this had to be the group of deer we’d glassed, but I couldn’t see any bucks. As I was watching this group of does for a little while, I finally saw antlers moving through the brush. It was the buck that I was after; he was a 4x4 with great backs. I ranged him at 80 yards, but I had to compensate for the angle so I set my slider sight for 60 yards. I had a single shooting gap about 5’ wide. I drew back every time my buck walked through it but I couldn't get him to hold still. He would pass back and forth; I drew back my bow on him seven times. All of a sudden after watching them for what it seemed like hours, he finally stood broadside in that 5’ gap. I drew back, took a deep breath, settled my pin and executed my shot perfectly! All I heard was "thwack" as I watched him hop up and arch his back. I knew I hit him a little bit farther back than I had wanted, but I was very confident about my shot. He ran around his does for a second and then it seemed as if he just bolted down the mountain. It was so steep that I lost sight of him.

I sat and watched the group of does and the smaller buck for a long time; they wouldn't move out of the area. It turns out that Martin started to put a stalk on the same deer because I had lost contact with him and my brother so they had no idea where I was. After I shot and sat there for what seemed like hours Martin ended up right above me. At the point when Martin showed up the other buck was still where he was before, but Martin decided to pass on him. The group of deer finally moved out of the area. I glassed the snow around where my buck was standing when I shot and I thought that I saw some blood. Unfortunately, it ended up being a leaf. When we got down to the spot, I saw some slight blood in the snow and my heart started to pound like crazy. 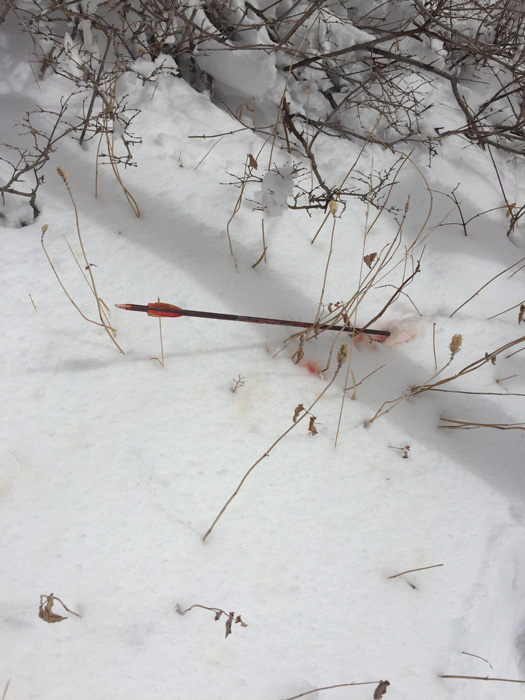 As I was looking around for some more blood, I found my arrow; it was covered with blood from the broadhead to the nock. I was ecstatic. Martin and I walked down about 15 yards and there was blood everywhere. We hiked down a little bit more and there was even more blood! All of a sudden I looked down and there he was my 2016 mule deer piled up 30 yards from where I shot him! It was such an unreal feeling to accomplish something I have always dreamed of. 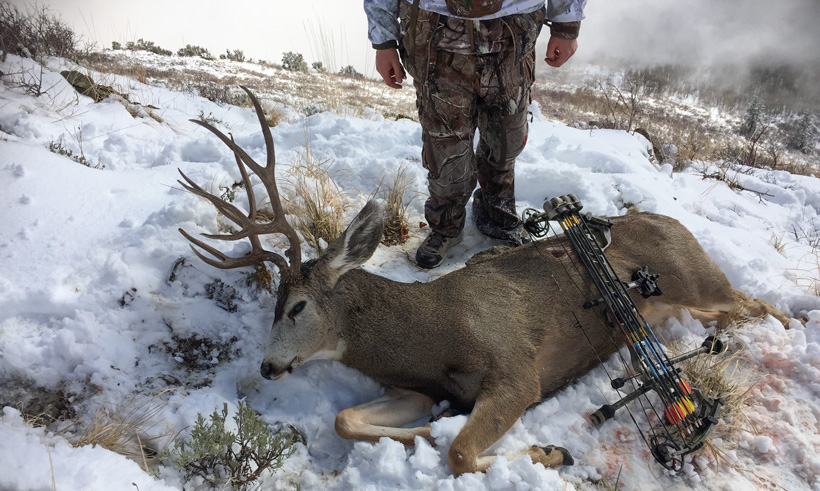 Martin called my brother, Nick, because my phone was dead. Nick was on his way up from the glassing point. 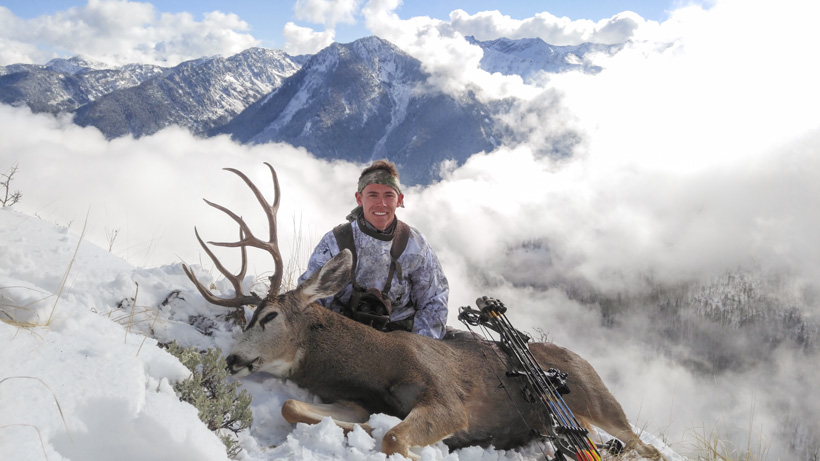 Zach with his first archery buck. Editors note: This is probably one of the best harvest photos of 2016. 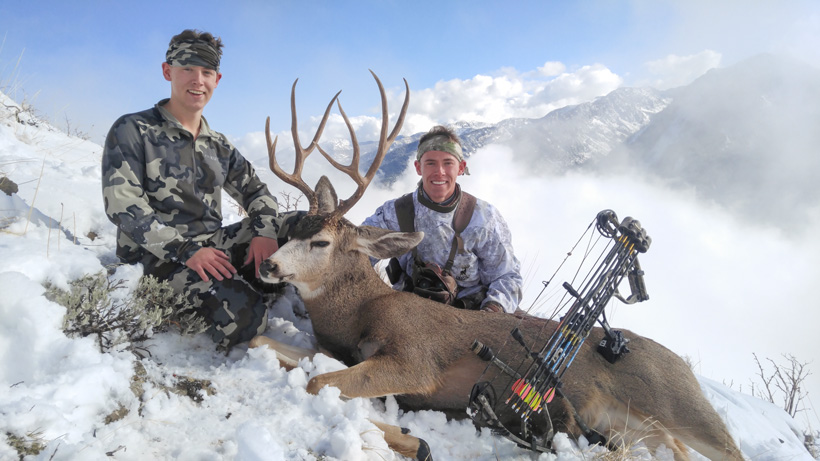 Zach and his brother with the buck. 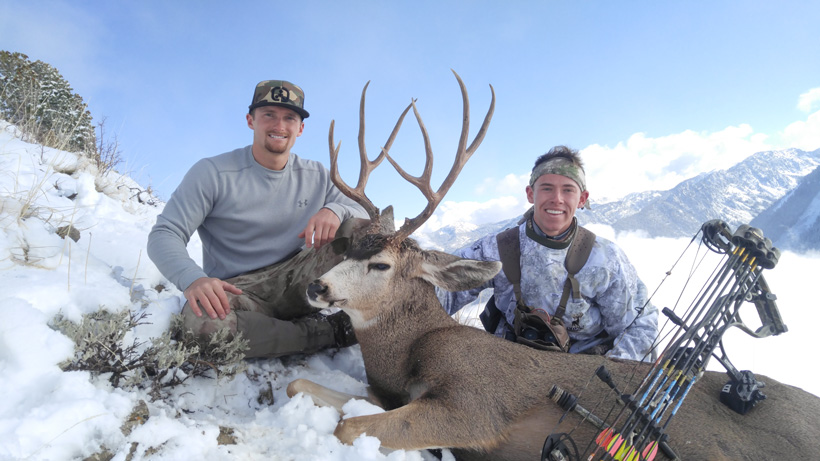 Zach and Martin with the buck.

When he arrived, we started to take pictures. We quartered out my deer right as the sun was going down. Nick took the head and I ended up using Martin's frame pack and carried all four quarters as well as both back straps. It was brutal until we got to the glassing point and I could get my pack and we could split up the load. 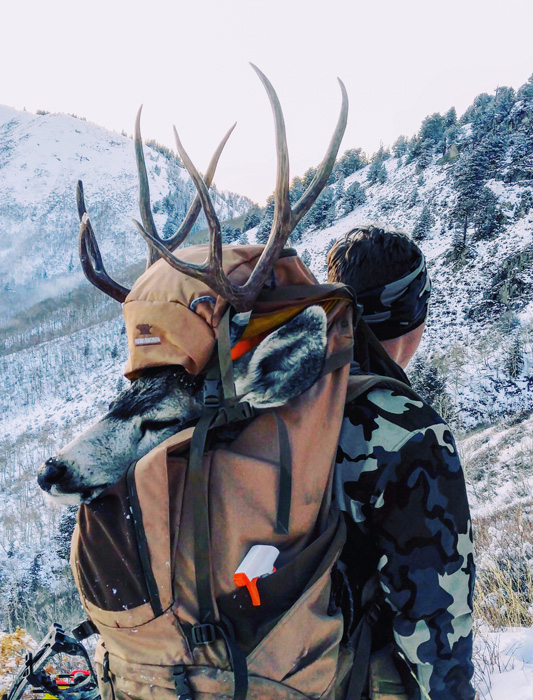 It was an easy downhill hike from there on. It was roughly 7 p.m. so it was dark and very cold on the way out. My dad and my uncle were going to surprise us; they were on their way up to help us pack out but we ended up running into them as we were hiking back to the trailhead. We got to the trailhead and headed home. It was an amazing hunt with great people. It was such an amazing experience. I am very pleased with my very first deer. I can’t thank my brother, Nick, and Martin enough. Martin was such a stand-up guy and was willing to do whatever to help out two brothers that he had just barely met. A big thanks to The Front Archery as well for all of the help in the off season.