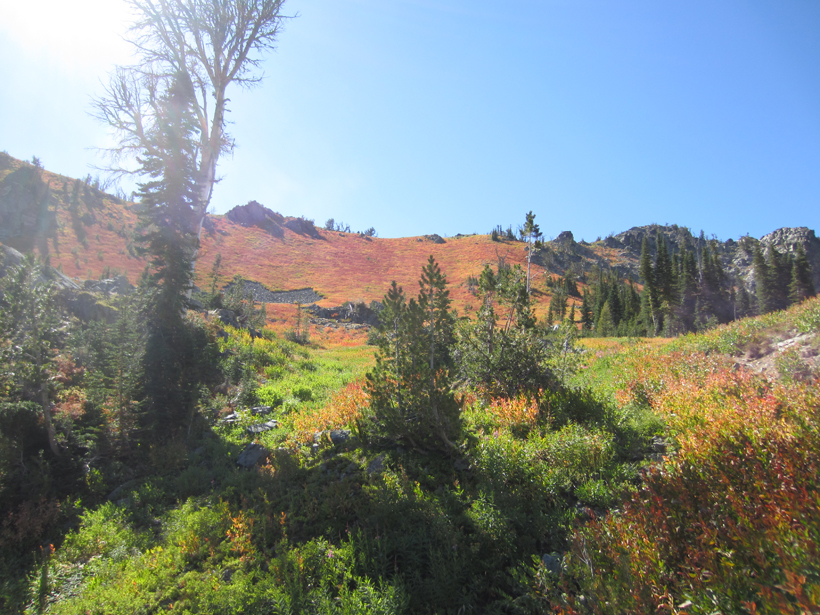 The mountain goat could arguably be the prettiest big game species in North America. When I invited myself along to film a friend’s hunt, I had no idea how true that statement was going to be. I believe the mountains these goats call home are equally as impressive. Of course I was going to miss the last four days of my own antelope hunt, but who wouldn’t jump at the opportunity to film a once-in-a-lifetime hunt. Not this guy!

It all began a few days before, when I invited myself along to film Shaun's hunt. I had three days to plan out my pack for a three-and-a-half day excursion to the top of the world, at least as far as Idaho is concerned. Camp was going to be set up 6-8 miles from the trailhead, so I had to shave a few important things off of the pack list. The first items to go were the binoculars and spotter. Afterall, I was there to film, right? I did not need to be looking for animals. Unfortunately, I was wrong and caught a lot of flack for not helping as much. 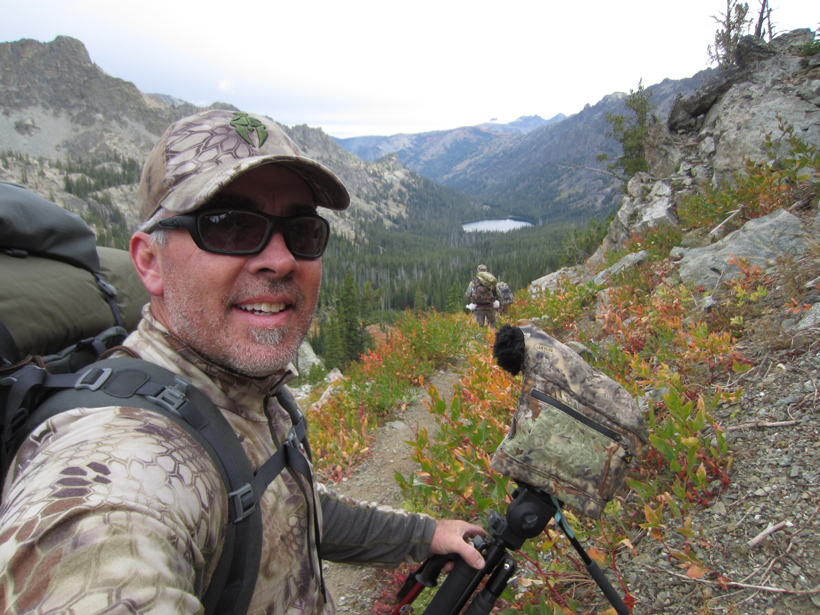 After days of deliberation, I finally had my pack ready to go at a light 85 pounds. The rest of the weight was just the minimum of what it took to survive. Tent, bag, pad, extra socks, shirt, base layer, satellite phone, knives, headlamps with extra batteries and food. I’m all smiles on the hike into base camp. Two miles up hill and the the last four all down hill. The thought crossed my mind that this goat hunt was going to be a piece of cake. Trust me when I say there was not any food left by the end of this trip.

All too often I get caught up in the hunt and forget to capture the whole experience, but I was determined this was not going to be one of those trips. 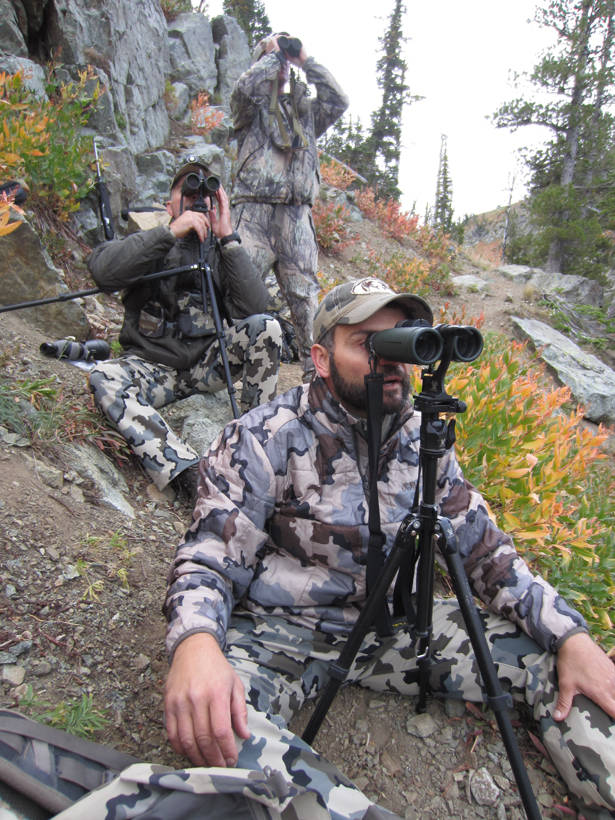 We glassed three billys on the way into base camp. This confirmed my thoughts of how 'easy' this was going to be. Jake Shea is in the foreground with Hunter Shaun Greear behind him and Shad Greear doing the freestyle glassing in the back of the group. As you guessed it, though, I was poked fun at quite a bit by the other guys, and, to be honest, it sucked to borrow their glass to see the goats on the other side of the canyons. I won’t make that mistake again. 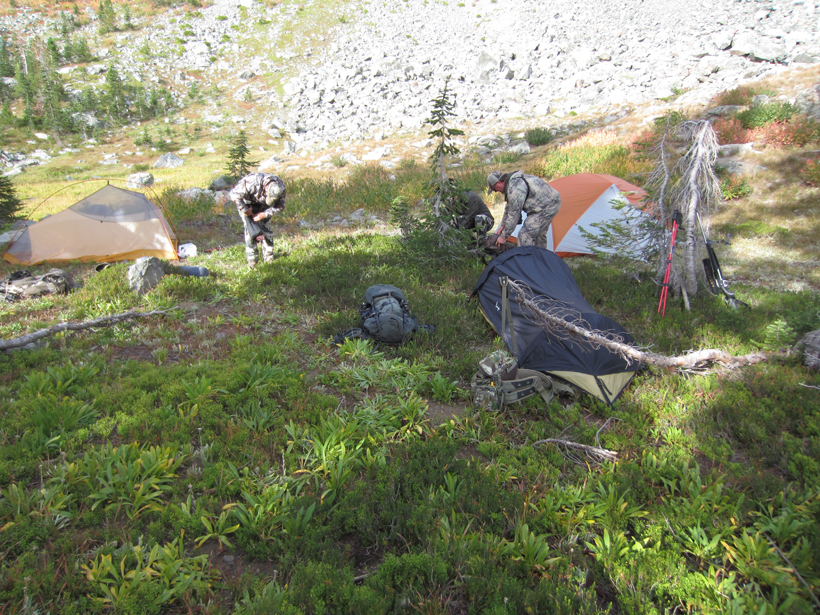 First spike camp of the trip. Rolling it up and continuing to move back in four more miles. 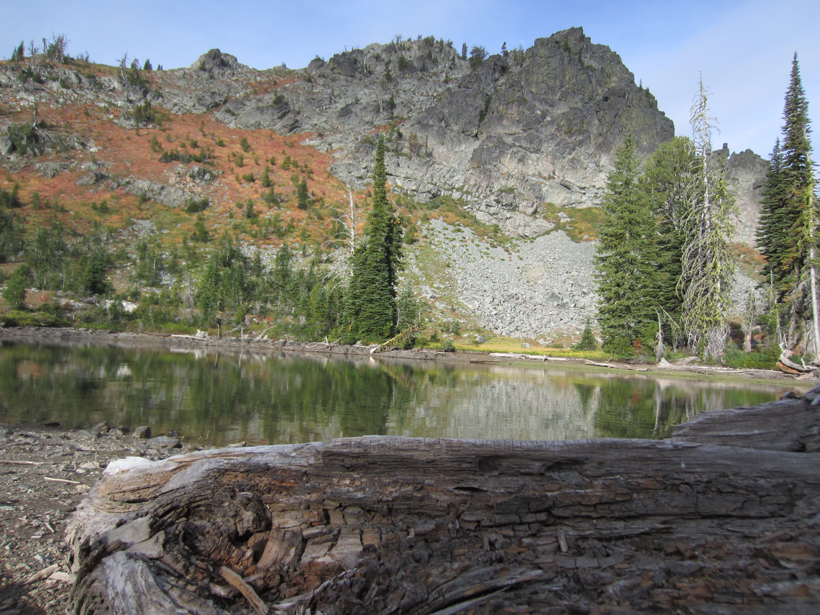 Waking up to a sight like this out of the window of the tent never gets old. Unfortunately the only time I saw this view was when we packed in and when we packed out. 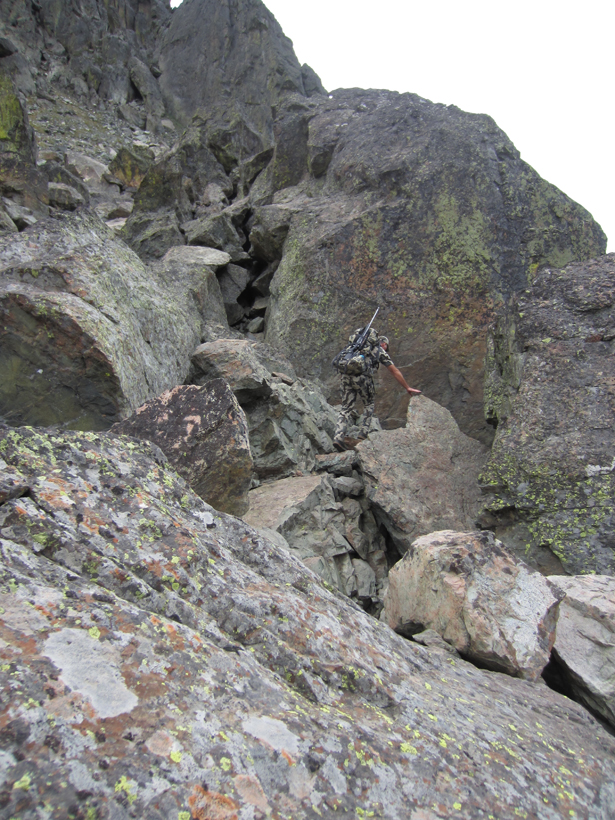 On day one of the hunt, we saw 40 goats in total and made a great stalk on a goat that Shaun had seen earlier during his scouting trips that he named Yellow. The chase for the yellow billy was a treacherous one. 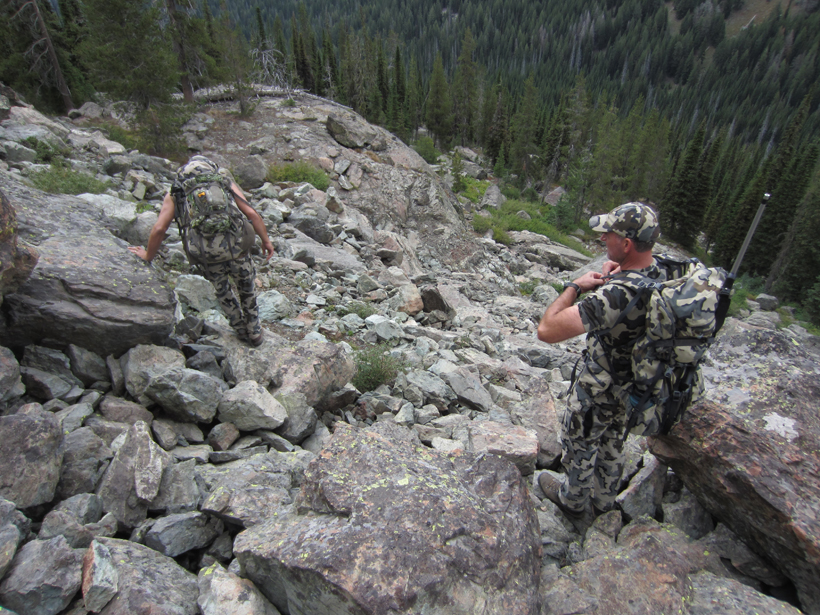 One slip and you might end up 100 feet below wondering why you stepped on that rock. 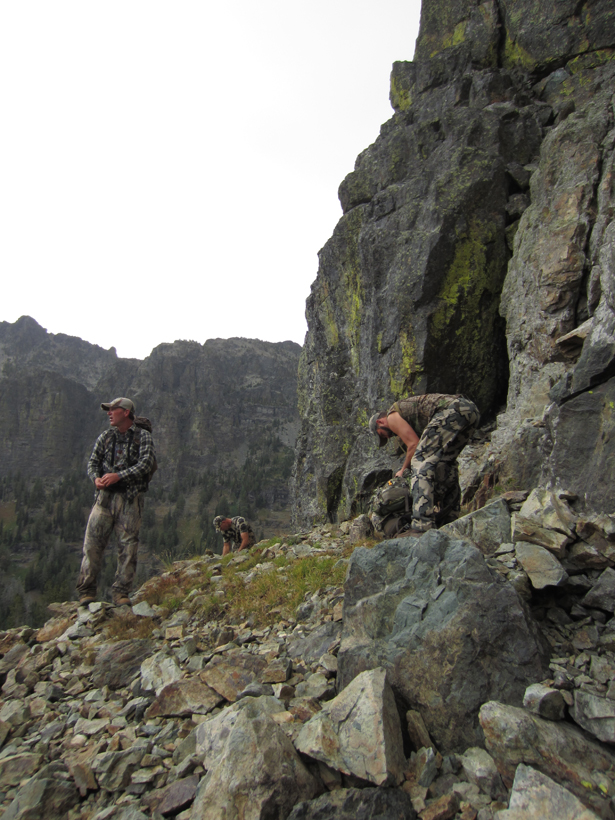 During the stalk, Mother Nature thought she would throw us a curve ball as it began to rain. This country is not even safe during dry conditions, but add rain and it is even worse. 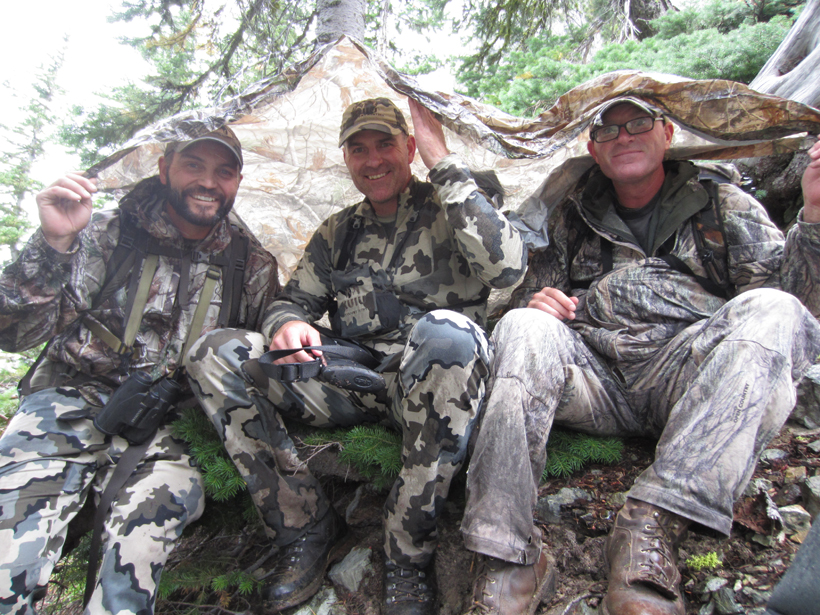 Hmmm, no room for the camera guy, huh? I’m always getting left out in the rain. Who else is going to do my job? After the quick break we carefully maneuvered through the tangle of wet rocks and made our way over to the billy, who by now was feeding in the rain. Unfortunately, the goat did not present Shaun with an ethical shot, so he let him walk.

Hoping to come back and catch the yellow-tinted goat in the morning, we started to make our way back to camp. Then came a second problem. We thought we could just hop over the ridge and drop straight down to camp. An hour later we reached the summit with nowhere to turn. Rock cliffs and slides surrounded us in every direction. The only way out was to turn around and head back the way we came. We reached our camp at 12:30am, which left little time for drying out our soaked clothes and boots. 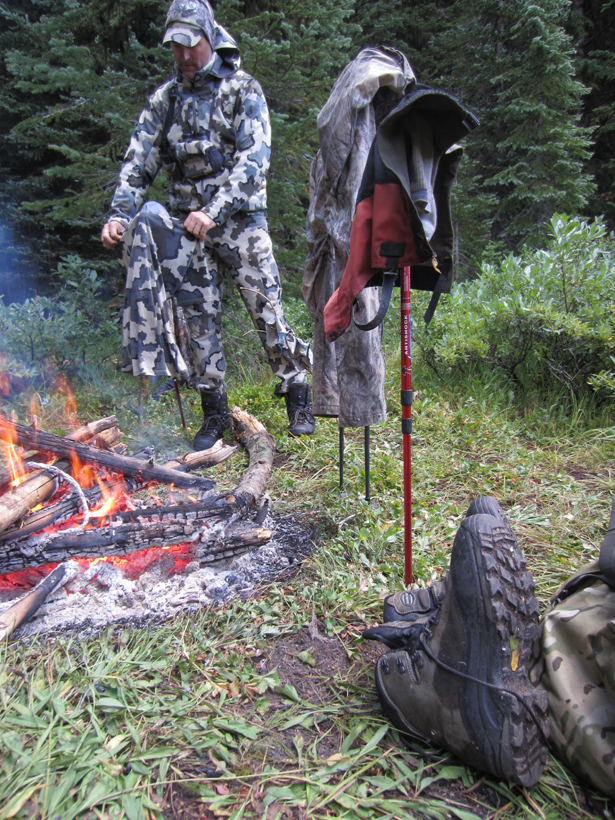 The next morning we were up with the sun hoping to dry out our boots before we made our way up to the rock cliffs to glass for the yellow billy that Shaun let walk the day before. Camp looked like a yard sale as we rushed to dry our clothes before the second day of hunting starts. So much for being above timberline at first light. Sometimes, being comfortable in the backcountry is as important as being in the right spot in the early morning. 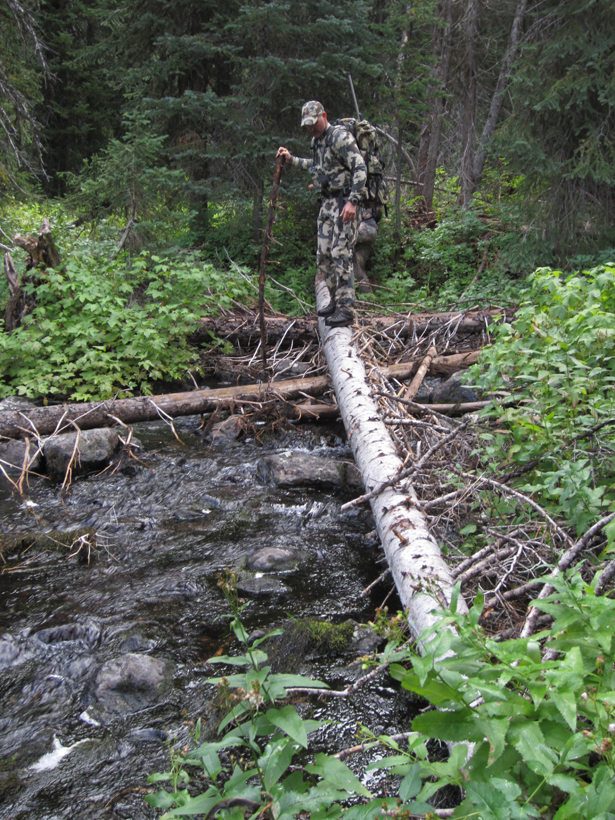 Making our way to where we last saw him the the night before, our hopes were high. Searching high and low, every crevasse and rockslide, we could not find the big billy from the night before. Unfortunately for this camera guy, the next large billy is usually just across the canyon. That was just the case, as Jake found a beautiful billy perched on a rock cliff on the other side of the drainage. 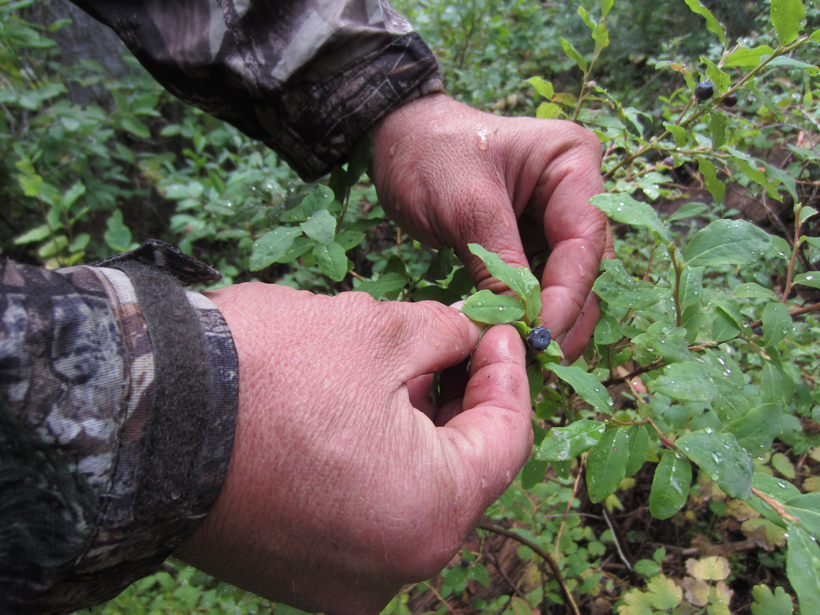 Huckleberries were very abundant this year in the mountains. They are refreshing and a great source of energy to give you an extra boost you need in the mountains. I was eating these as fast and as often as I could. 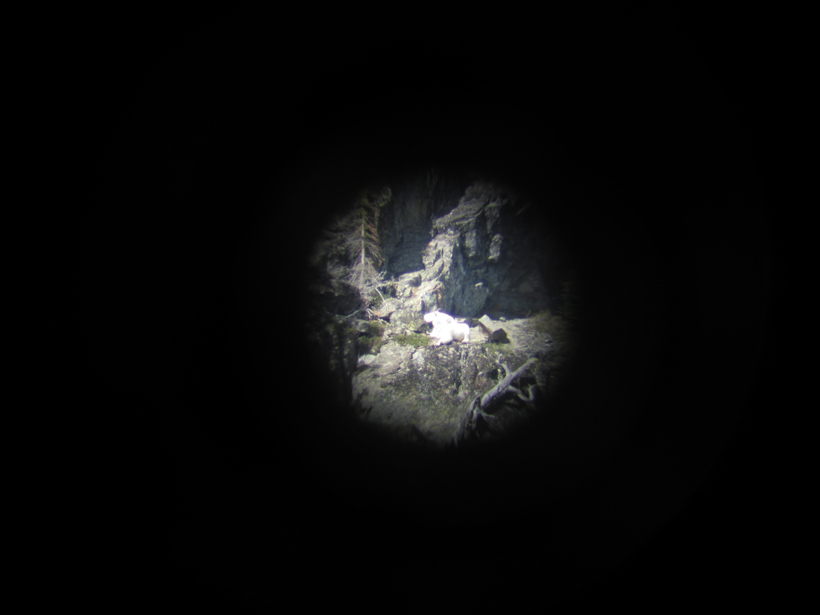 Time to put on another stalk and see if we can get some footage of a big Billy hitting the dirt. Shaun, Jake and I made our way across the canyon as we left behind Shaun's brother, Shad, to man the scope and keep tabs on the goat. Shaun’s goat was laying on a rock ledge sunny himself. At this point we are 1200 yards away and planning our stalk.

Forty-five minutes later we had closed the gap to 309 yards, which is close enough to put an end to the story. With three cameras rolling, Shaun put one in the pump house.

Shad’s whoop and holler from across the canyon could be heard echoing off the rock walls for miles. The goat was down. We waited for Shad to make his way across the drainage before even one picture was taken. 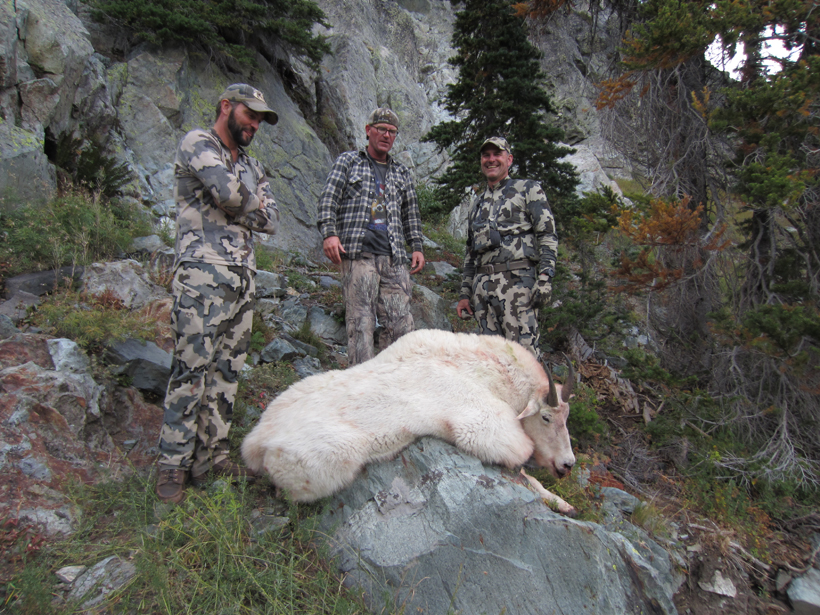 Admiring a well-deserved trophy! These mountain goats are truly an awesome species and they have totally earned my respect. What they call home is something that could never be inhabited by anything other than a bird. 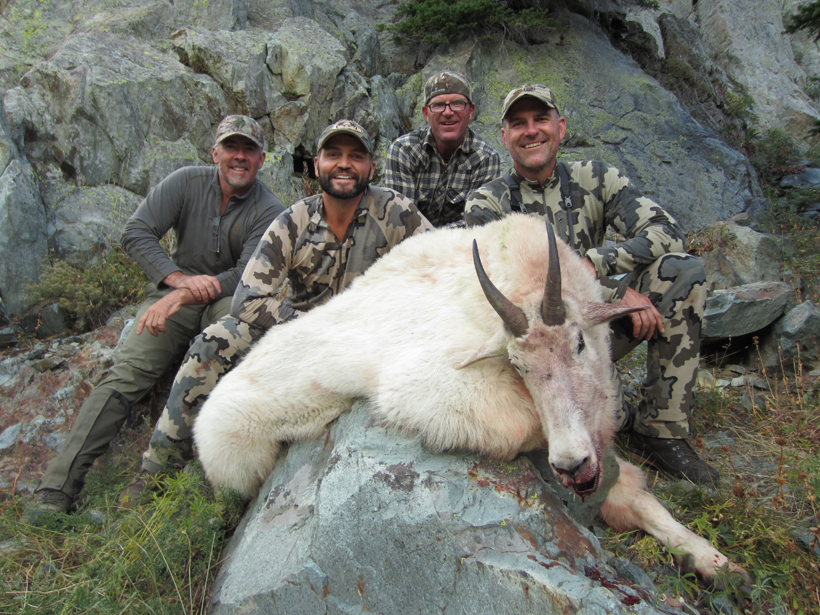 A happy group of guys. It’s always nice to put an end to a story and catch it all on video. Seeing the camaraderie between these two brothers was awesome. They looked after each other like siblings should and it was just as much Shad’s goat as it was Shaun's, especially since the pack back to camp was still ahead of us. 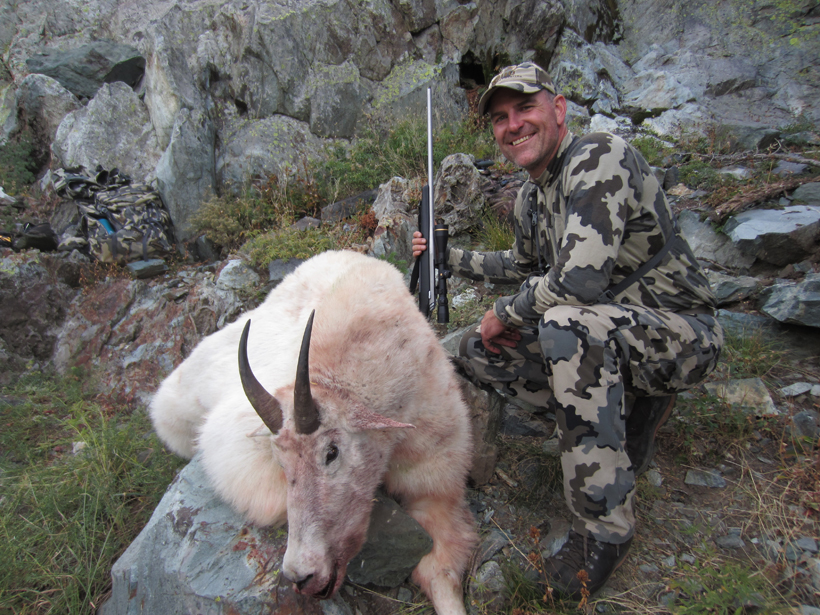 A hunter and his trophy. Shaun’s billy has 9.5" long horns and is 5 6/8" at the bases. It was aged by the Fish and Game department at 5.5 years old. After a few dozen photos and some face time in front of the video camera, it was time to skin him for a life-size mount, bone him out and head back to camp. This lengthy process was a breeze, but I wish I could say the same for the rest of the night. 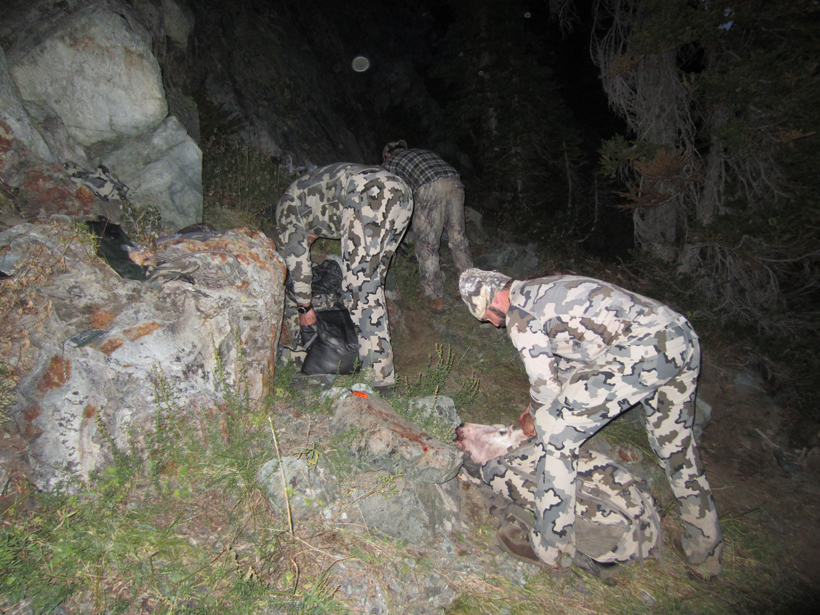 As light was fading, the last of the goat was placed into the packs. A walk around the kill site confirmed the site was clean of trash and anything we could have accidentally left behind. Head lamps were turned on and the daunting task of heading down the 1,200-foot rock chute to the creek below began. At 10pm we reached the creek and filled up the water bladders one last time before making our way to camp. Two miles to go and we were back in camp. Little did we know, it was going to take us six-plus hours to go that two miles. Six hours of thick brush, holes, slides, rocks and deadfalls left us wondering why we chose this route.

It was all or nothing and a couple times Shad mentioned starting a fire to stay the night, but we kept plugging away. It seemed like inch by inch we were making our way across and under every dead tree the forest had to offer. Every time we thought we were hitting a clearing, the forest would swallow us up again.

Finally, at 3:30am we reached the trail. The last 3/4 of a mile was a breeze. Seeing that trail was almost better than shooting the goat. I was spent and only had 55 pounds on my back. Wet shoes, silver-dollar sized blisters, and being flat out exhausted, we all crawled into our tents around 4:30am for one last night on the mountain before rolling up camp and heading out the last six miles to civilization. 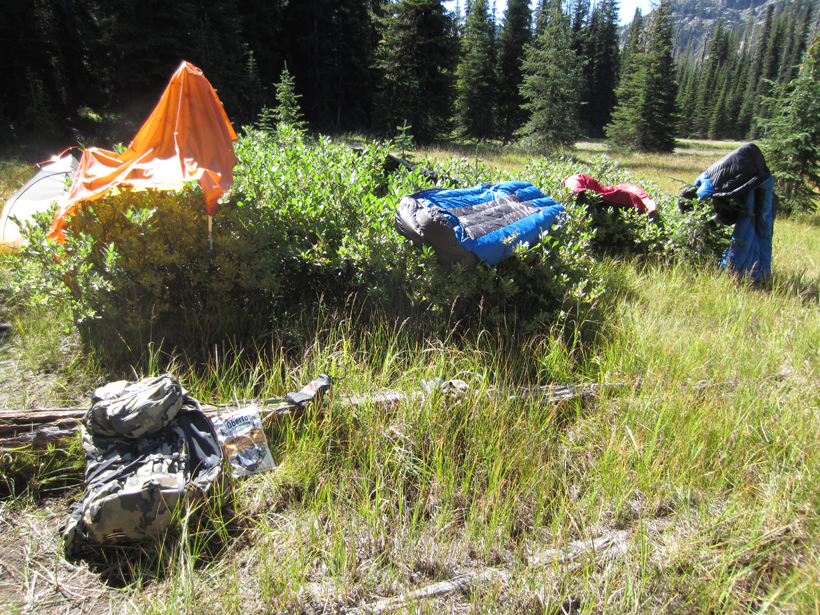 The next morning I woke up to the sound of Shad breaking sticks for a fire. We all crawled out of our tents dead to the world. Time to eat, dry our clothes, pack and head to the truck. 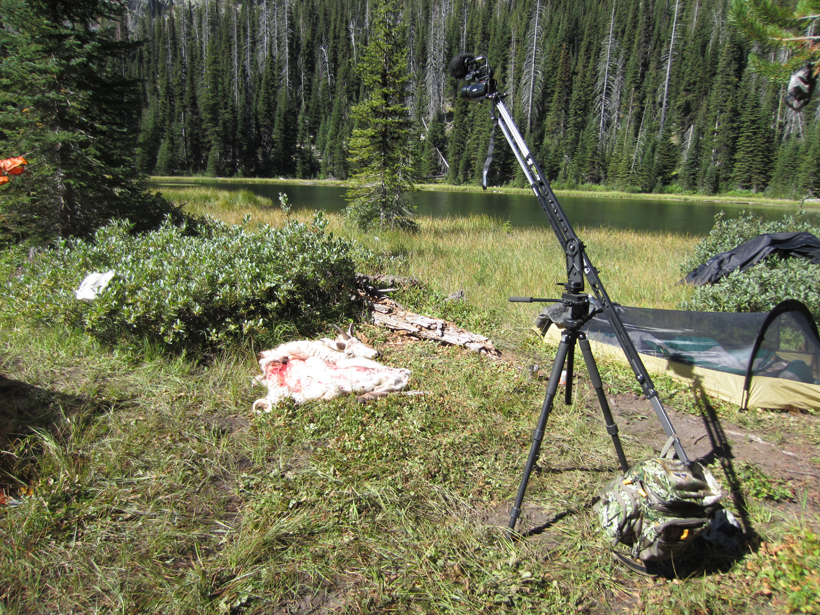 I was able to capture some cinematic shots before packing up and leaving. I love the Kessler Pocket Jib Traveler; it goes with me on all of my hunts. A camera guy isn’t a good camera guy without a slider or crane in his pack. 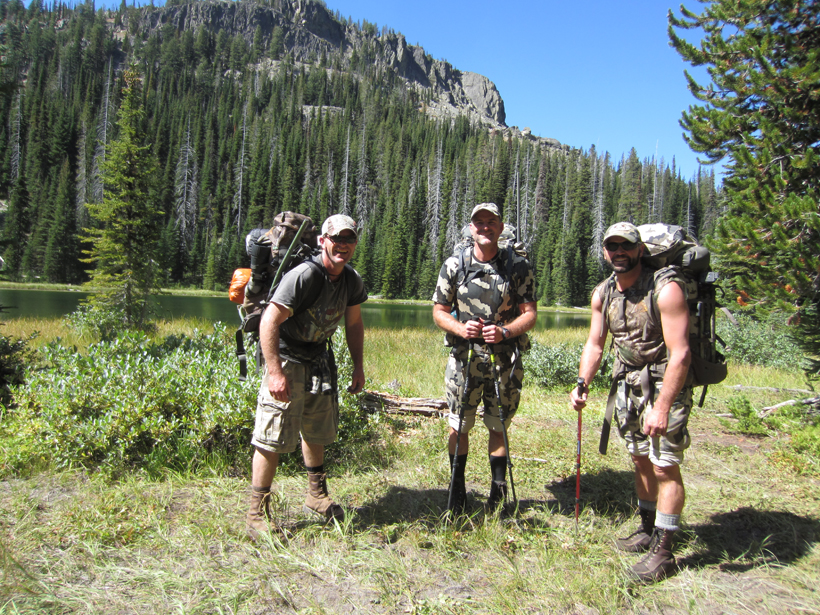 Jake thought, instead of making it a two-trip pack out we should do it all in one trip, and I’m glad we listened. 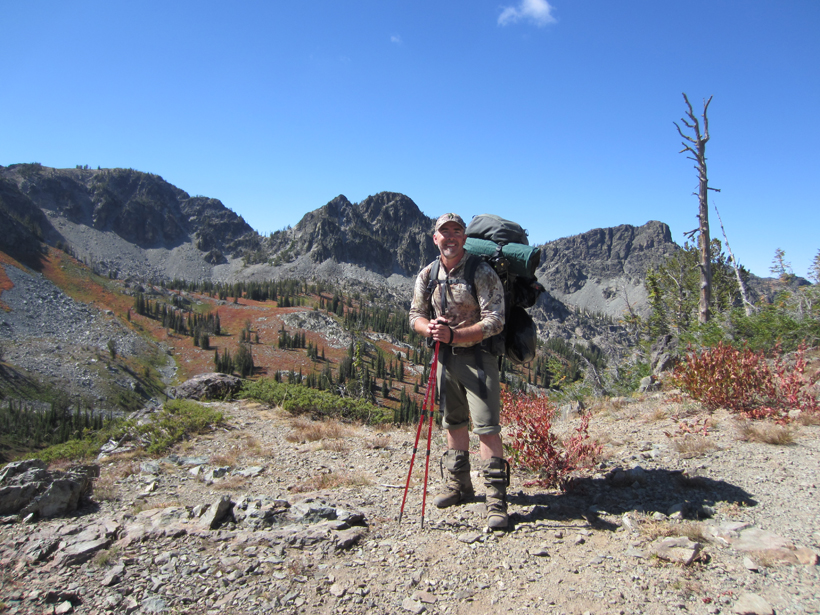 The second trip would have added at least four more hours of hiking and none of us needed that strain. Laughs filled the air as we loaded up camp to head out of what I consider my most mentally and physically challenging hunt I have had the pleasure to participate in. I’m going to miss this country. Hopefully, I will get to experience it again someday, maybe with a tag in my pocket.