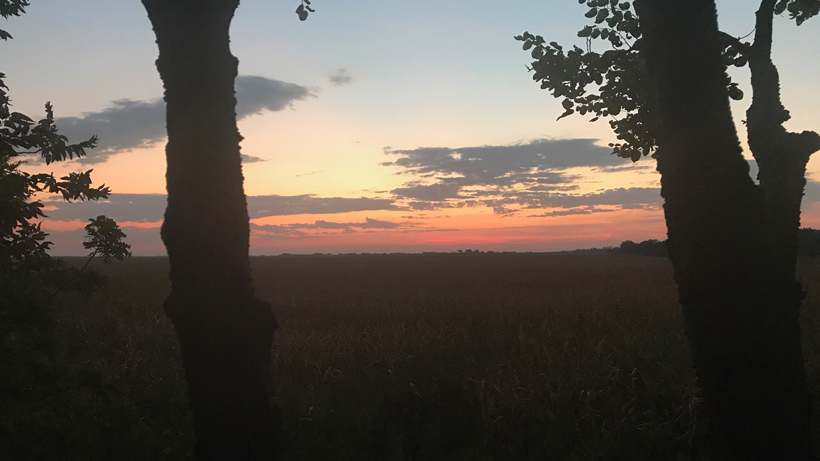 I joined goHUNT in early 2016 after deciding that the hunts in the western US were the next venues for my outdoor adventures. I grew up in Memphis, Tennessee, but now live in Georgia. I went to college in the central valley of California and got a taste of western public land hunting for deer, quail, turkey, and ducks. I credit my grandfather for putting the fire in me to hunt and love the outdoors. I also owe my dad for taking my brother and me on countless fishing and camping trips while growing up. I had done some deer hunting growing up as well. While hard-to-draw elk, mule deer, and bighorn sheep hunts are all part of my long-term plans, I also decided to make short-term goals. After reading the goHUNT INSIDER application strategy articles, I decided my first adventure would be in Kansas. With a guaranteed draw with only one preference point, it is a state that any hunter can easily bank on hunting every two years for a mature whitetail buck.

The last few years of my hunting career had been in drought mode, to say the least. After harvesting a Tennessee whitetail buck in December 2014 and a turkey in the north Georgia mountains in March 2015, I had been on 12 deer and turkey hunts with nothing to show for it. Most of those hunts ended without seeing a single deer or turkey. In the same span of time, I lost my grandfather—the same one who had taught me to love and cherish the outdoors. His passing was hard on my family, especially for my brother and me. We looked up to him and we had so many great experiences and memories together. It goes without saying that I was more than ready to end that losing streak and make the most of my Kansas adventure. 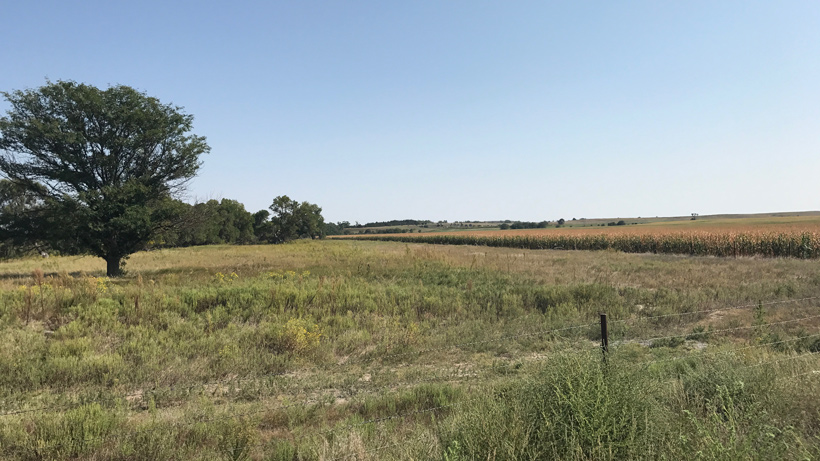 I contacted an outfitter in late 2016 and made plans to hunt the 2017 early muzzleloader season in western Kansas. The hunt and trail camera photos he sent me had me counting down the days until September. I spent the spring and summer shooting and gaining confidence with my muzzleloader. After putting nearly 150 rounds through the rifle with seemingly endless cleaning swabs and patches, I felt ready for the hunt.

This hunting trip would be a first for me in a lot of ways: first guided/outfitted hunt, first time flying with a rifle and first muzzleloader hunt. I knew that the only way to get past these first-time jitters was to go out and enjoy the whole experience for better or for worse. I flew into Omaha, Nebraska and drove four hours west across the state and into Kansas. I was stunned and awed by the open, seemingly endless, agricultural fields and sweeping landscape. I arrived at camp the night before the season started and the five of us settled in for the first morning. 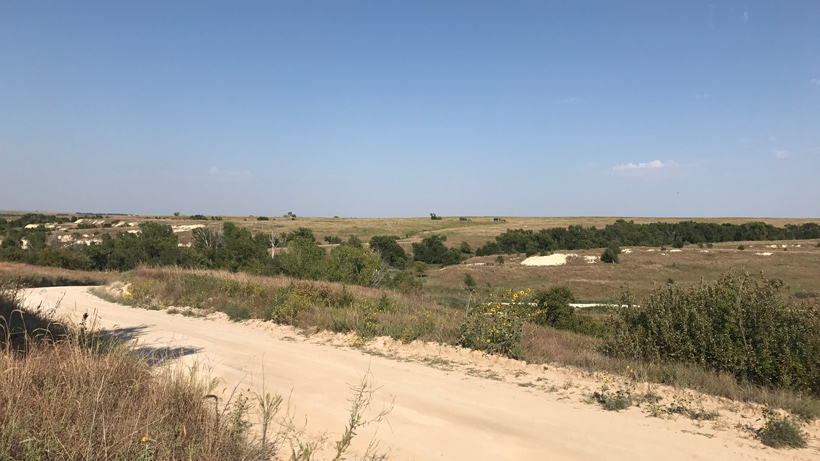 Over the next three days, we rotated between stands at several farms and properties that the outfitter leased. Our biggest obstacle declared itself quickly: the unseasonably hot temperatures.  Daytime temperatures climbed into the mid-90s, and only dipped into the 70s at night. The hours in the stands were tough on all of us. The deer spent most of the day bedded and were on their feet for very short periods of time. Through our field observations and the outfitter’s trail cameras, we learned that the heaviest deer movement was during the first 30 minutes before sunrise and during the last 30 minutes before end of legal light. We spent hours in tree stands, ground blinds, and tower stands, yet only saw three to four mature deer between the five of us. I had several encounters with young bucks and does with one doe coming 10 feet from under my stand! There were plenty of does and younger bucks seen by all of the hunters, but we all kept a close watch for a mature buck. 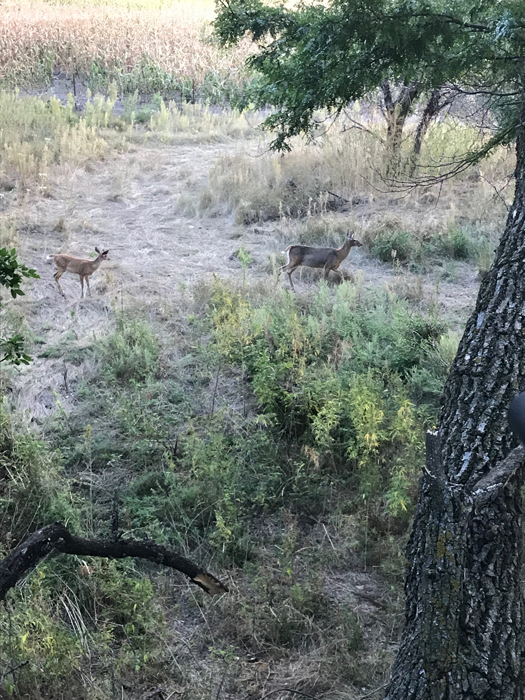 On the fourth day of the hunt, the forecast called for the hottest temperatures of the week. The morning hunt passed quietly without a single mature buck seen. With optimism beginning to fade, the outfitter made the call to hunt a property that presented a dilemma: once hunted, our presence would spoil several nearby stands for the remainder of our hunts due to the prevailing winds. On this spot’s trail camera, there were two mature 10-points and a tall 8-point that ran together. They had been hitting the cameras with regular frequency since July. We decided to take a chance and go all in. 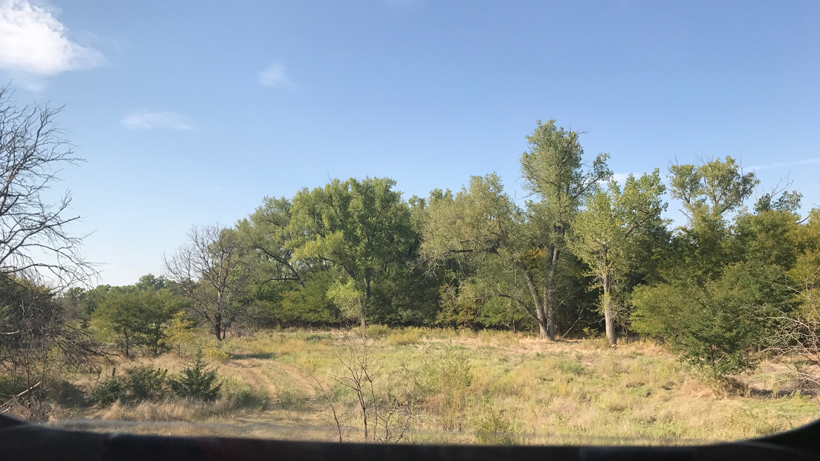 I made the walk from the property’s gate and into the tower stand situated in a long draw between two stands of poplar and locust trees. The wind was blowing steady, carrying my scent to the northwest. I had set myself to watch the field with the wind in my face, opening just three of windows on the blind.  As the wind whipped through the blind, I enjoyed a bit of relief from the heat and stagnant air. Over the next few hours, a flock of turkeys and a couple of does moved through the draw. With daylight fading, I scanned the edges of the trees for movement, trying to conjure a buck out of the heavy cover. A few minutes after 8 p.m., I glassed past some dark timber that I had probably looked at a dozen times that day when my mind registered a thought, “Hold on. That limb wasn’t there before...”

Sure enough, the limb was a set of antlers and I watched two mature bucks begin making their way through the trees.  The bucks briefly advanced towards me before moving behind a juniper tree. I quickly put down my binoculars and I set my reticle on the edge of the juniper trees, which I had ranged to be 90 yards away. Through the scope, I saw the first buck step out and scan the draw. As I settled into the rifle to set up the shot, I knew that this was going to be my chance. As I waited for the buck to take a step or two more for a better shot, a doe began blowing loudly near the stand. The wind had betrayed me! She had moved in from the south as I was fixated on the bucks and caught my scent swirling nearby. The buck tensed up, his head darting side to side. I knew I had to take the shot.

The rifle erupted and the buck darted back the way he had come from. It was hard to see past the thick cloud smoke from the rifle. I anxiously listened for a few minutes and heard no crash or fall. I gathered my gear and headed back to the drop-off point to call the guides. They had already heard from another hunter that a shot was fired and we headed back to the camp to re-group. We decided to wait a couple hours, and head back out.

We made our way through the darkness to the draw. Amazingly, we were greeted by the other two mature bucks from trail camera photos. Those two were feeding at the edge of the draw, not too far from where their buddy had been shot. The blood trail was faint, but the guides and I tracked it to a stand of locust trees under which the buck had come to rest. The emotions rushed through me as I walked up to the buck. I was speechless. 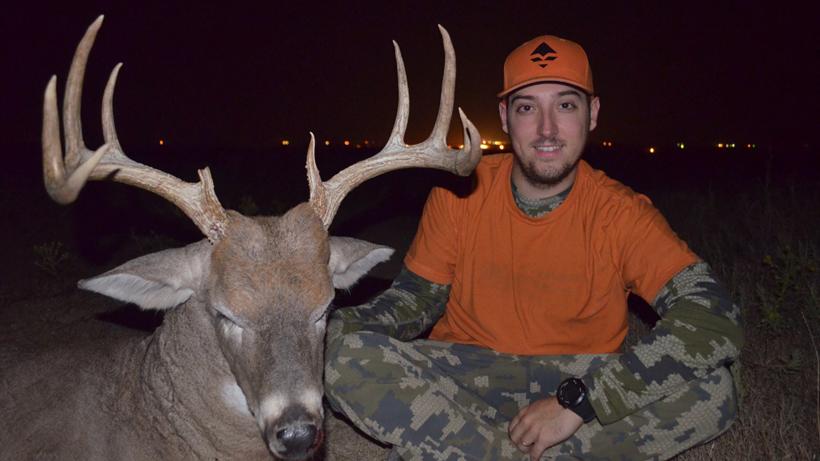 When I think back on that night, there are two thoughts I can recall from the myriad that ran through my mind. First, I was humbled by the harvest culminating my efforts that week. The satisfaction at filling a tag is a beautiful thing and one hard to fully describe. Secondly, I had this certain peace, knowing that my grandpa was with me that night in the stand, watching over me in spirit.  I know he would have been so excited to be in that recovery. The rest of the night as we took photos and quartered the deer, I was left with such appreciation and fulfillment that I had not experienced in a long time with hunting. I’m sure that same feeling is what keeps us all coming back for more, no matter how tough the conditions or grueling the hunt becomes. 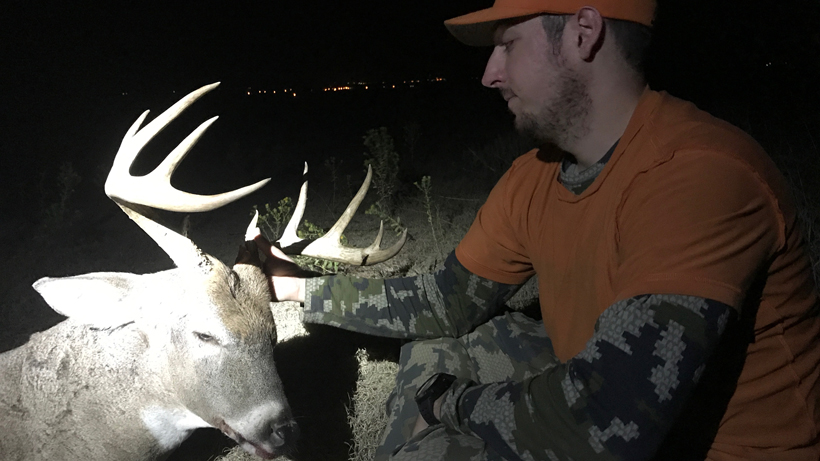 The memories I made in Kansas that week will last forever. I’d like to thank the outfitter, guides, and the guys I shared camp with that week for their camaraderie. I’d also like to thank my wife for putting up with my hunting addiction and for always supporting me. And, lastly, I owe thanks to my grandpa. You were my hero and still are. My final words are for hunters like me who live east of the Mississippi River: set your hunting goals and waste no time! Head out west and start applying for hunts both short and long-term.