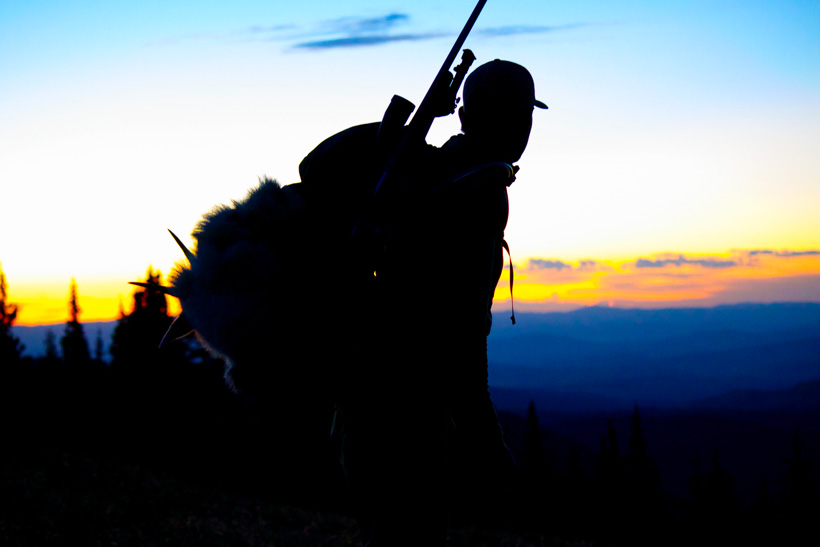 The day after I graduated high school I headed to Western Colorado to begin an adventure as a mountain guide. I could not think of a better way to start my newfound freedom as an adult than to guide clients up the rugged fourteeners that Colorado is known for. During my two summers as a guide, I learned a lot about the weather, geology and animals that existed above the tree line. To this day, I am addicted to the vast green basins that the high country offers and the abundance of wildlife that exists. I still remember the first mountain goat I encountered like it was yesterday. The old billy scrambled the cliffs above me with such ease that I was left in awe. Because of that encounter, it became my goal to one day pursue these magnificent animals with the self-made bow crafted by my father.

After years of submitting preference points, I was hopeful that 2014 would finally be the year that I would have the opportunity to hunt mountain goats. Knowing that my chances were extremely slim, I opted to apply for a nanny rifle tag to help increase my odds. To my surprise (and excitement) I saw that all my preference points were suddenly gone when I checked my results later that spring.  The world seemed to stop as I realized that I had drawn the coveted mountain goat tag that I had desperately wanted. 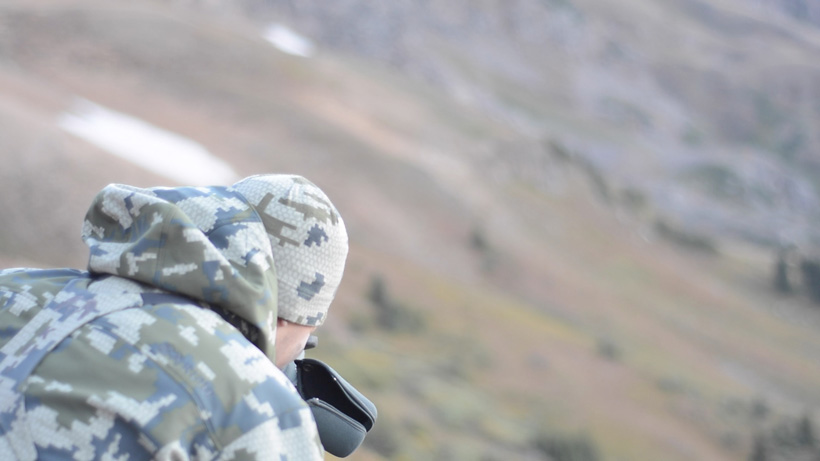 With the season only four months away, I could not wait to get into the unit to scout. But, first, I had to wait for the snow to melt. While I waited, I used the time to focus on my workouts and to refine my gear; I knew how grueling the hunt would be. When summer finally approached, I made several trips to the high country only to still find an abundance of snow and a few goats. I knew I was up for a challenge in this game management unit as there were reports of only two dozen goats left in this vast and rugged hunting unit. As September crept closer, I started finding more goats, but I had to work hard to locate them. I continued to make several trips into the high country and finally began patterning a group of mature nannies in a hard to access cliff band. 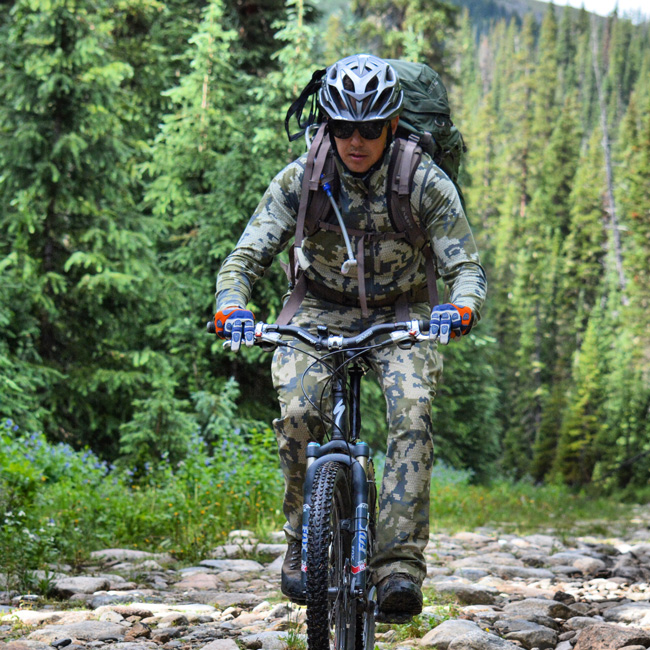 Finally, opening day was less than 24 hours away and it was time for my buddies and I to meet at our designated parking spot. We were soon underway on some rugged double track with our mountain bikes and trailers loaded to the brim. After a long and grueling ride, it was finally time to park our bikes where the double track faded into the wilderness. We quickly changed our cycling clothing over to hiking gear and started the steep ascent towards base camp. As we worked our way further up the steep trail, the anticipation of cresting out of the tree line was more than I could take. We made our way to a high alpine meadow which offered views of where I had last seen mountain goats. I scrambled up in excitement so I could get my binoculars to my eyes and start scanning the cliffs above us for the unmistakable white coat of a mountain goat. It did not take long before I caught movement in the sharp granite cliff face above us. 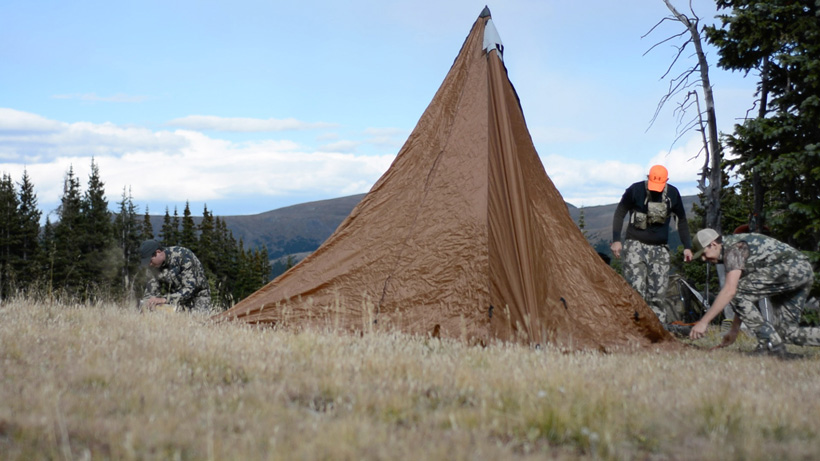 We set up base camp and split up. Grant and Scott had deer tags of their own to fill and Kevin and I wanted a closer look at the goats that I had spotted. In addition to the goat tag, I also had an archery elk tag in my pocket and I was not going to miss a chance at harvesting one with my recurve bow. After glassing the goats and identifying three mature nannies, we decided to move over to the adjacent basin and try to lure a lonesome bull to our calls. As night began to fall, we heard a faint bugle respond to our calls and start to work closer to us. Within a few moments the hot bull was heading towards us as his bugles began to rumble through the trees around us. However, before long, this bull had enough with the sweet talk and was instead persuaded by a group of cows milling in the timber below us. Feeling down but not defeated, we began making our way back to camp. As our headlamps lead us through the dark, we walked silently out of the basin. Deep in thought, I began devising a plan for how I was going to approach the goats in the morning. 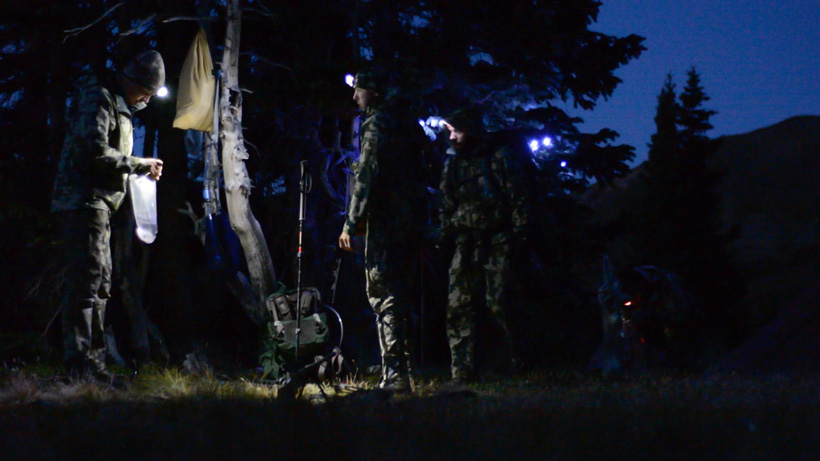 As our alarm clocks sounded, I crawled out of the tipi to hear the welcoming sounds of the mountain ptarmigans. After a short hike, we crested the edge of the basin and quickly found the goats bedded in the jagged cliffs. After identifying which goats were nannies, Kevin and I decided to climb toward the top of the cliffs and make our way down an adjacent avalanche chute. Grant and Scott agreed to hike below the cliffs to direct us into the goats. The goats were in perfect stalking position; we anticipated them leaving their beds in the cliffs to feed into the lush avalanche chutes. 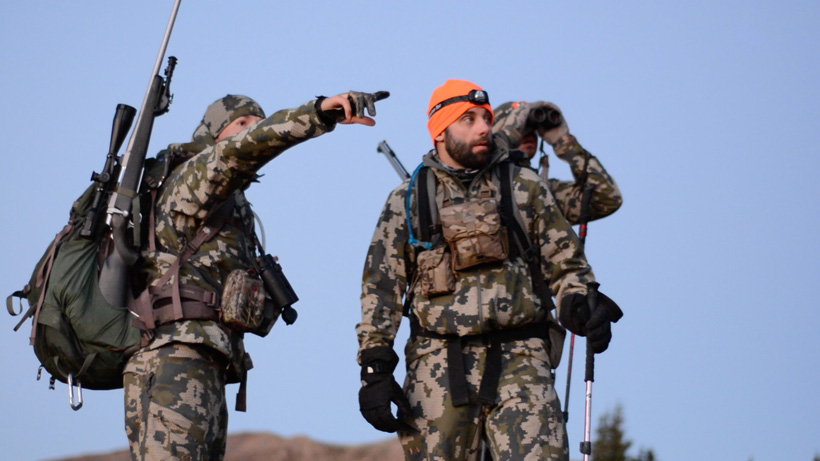 As we made our way slowly down the chute, Scott said that we were getting closer to the goats. As we approached, Scott signaled that the goats were getting out of their beds and scrambling away from us. They must have caught wind of us as I do not think that they ever heard or saw us. As I came around the corner of the cliff I realized that we were only 50 yards from where they were bedded. I caught a glance of the last nanny running away from us.  I quickly switched to my rifle and chambered a round in anticipation that one of the mature nannies would offer me a shot. As I rapped around the cliffs, the goats headed straight up the jagged granite. We decided to head back to the avalanche chute and see if there would be a shot opportunity at a different angle. When we reached the chute we caught the goats scrambling through the cliffs 150 yards above us. I steadied my rifle on a large rock and focused my sight on the largest nanny. As I focused on getting my breathing under control, I realized there was no safe or ethical shot due to the goats being so high in the cliffs. We watched the goats scramble out of sight over the next ridge as we sat exhausted, wondering if we would ever see them again. The agility and the strength of the magnificent mountain goat is what attracted me to hunt the animal, but at this moment I was cursing it. 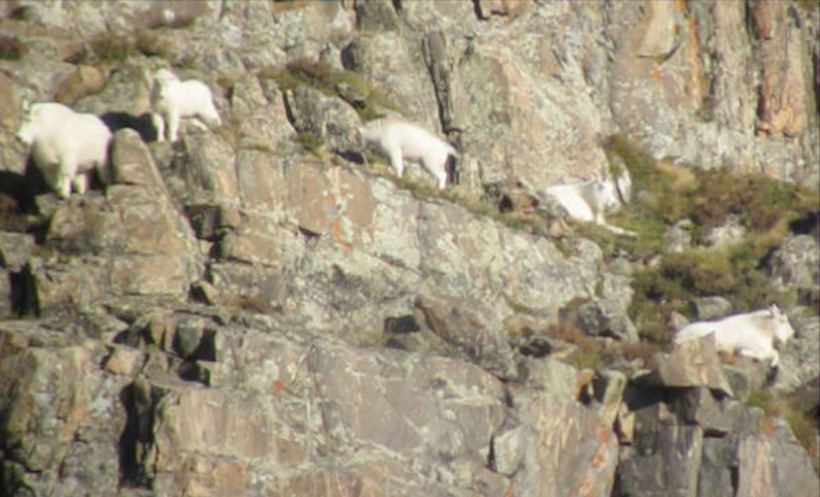 As we resumed our pursuit of the goats, each step was exhausting. I was carrying the weight of the missed opportunity of my  prior stalk. After cresting a sharp ridge, we decided to glass and enjoy a hot cup of coffee. As Kevin looked sharply through his spotting scope, I began to take in the unbelievable views that the high country had to offer. There were no signs of goats, but I was still grateful just to be back in the high country with tags in my pocket. 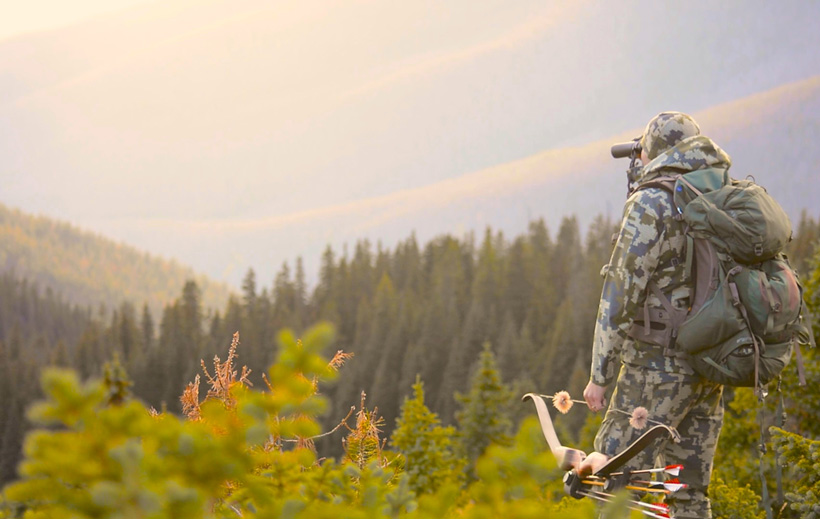 The next couple of days crept by slowly with no goat sightings and numerous hours of hiking and glassing. However, I knew going into this hunt that it was going to be a challenge because of the low goat numbers and high hunting pressure.

The four of us had one morning left to hunt before Kevin and Scott had to return to work. Kevin and I decided to hike up a new ridge above camp and caught a lone bull elk cruising above the tree line. We decided to hunker down in the shadows of the high mountain grass and cow call to the young bull. The bull instantly bugled back and started running towards us, covering the long distance quickly and in our laps in a matter of minutes. I was cringing at the fact that I left my bow in camp to save weight for our long trek to the neighboring basins. With the wind at our advantage, the young curious bull fed around us as I cursed under my breath about leaving my bow. 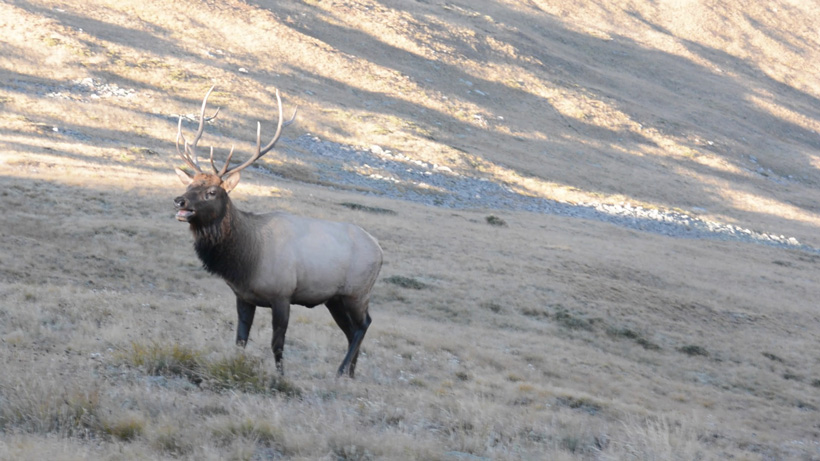 As fate would have it, this missed opportunity was for the best because a few hours later Kevin and I finally found goats on a ridge several basins away. Unfortunately, there was no safe way to get to the goats from our location. I knew I would have to pack up camp in the morning and head back up a different drainage. Kevin and Scott headed down the trail to travel back home, but Grant and I decided to spend one more night in camp and head out early in the morning towards the newly spotted goats. 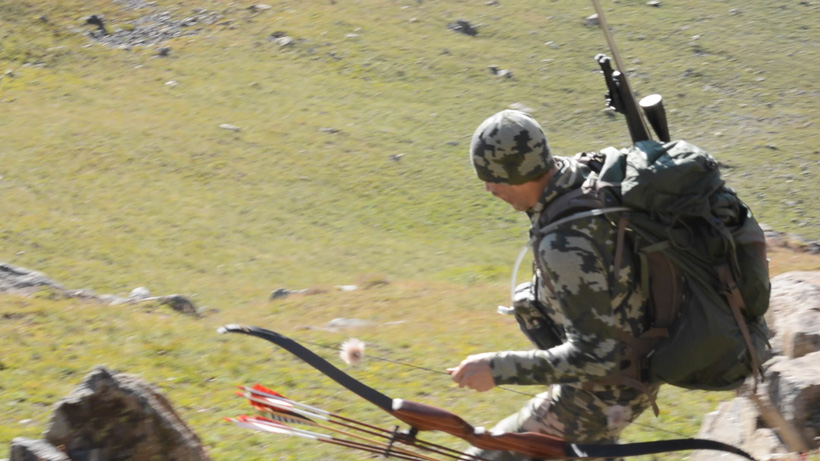 With the goats miles away and with thousands of vertical feet to cover, we paced ourselves for a marathon. As we made our way down the trail to the truck I knew this was going to be the easiest part of our day. Once we arrived at the new access, I realized how steep and unforgiving the terrain was. With the goats being in a wide open basin, there was little stalking cover so I decided to leave my bow at the truck and harvest one with my rifle. As I took each step forward I tried to ignore the burning in my legs, I knew if I got a shot opportunity at a goat, it would be worth the pain. 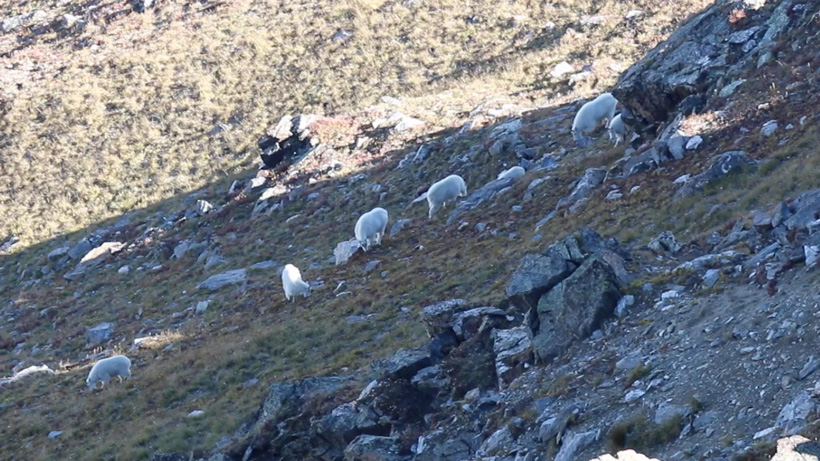 After we climbed numerous miles, we finally laid eyes on several goats on the mountain side. We crested the ridge above them as they bedded in the steep cliffs at the edge of the basin. With the wind in our favor we flanked the goats and set up in some large rocks for cover. With no favorable shot offered on a mature nanny, we waited patiently for them to get up and feed. Without hesitation, they started to feed into the basin 300 yards below us. With a nanny identified I made sure Grant had the camera on the goat. I steadied my crosshairs on the vitals and slowly squeezed the trigger. As I found the goat in my scope again it was rolling down the avalanche chute below us. 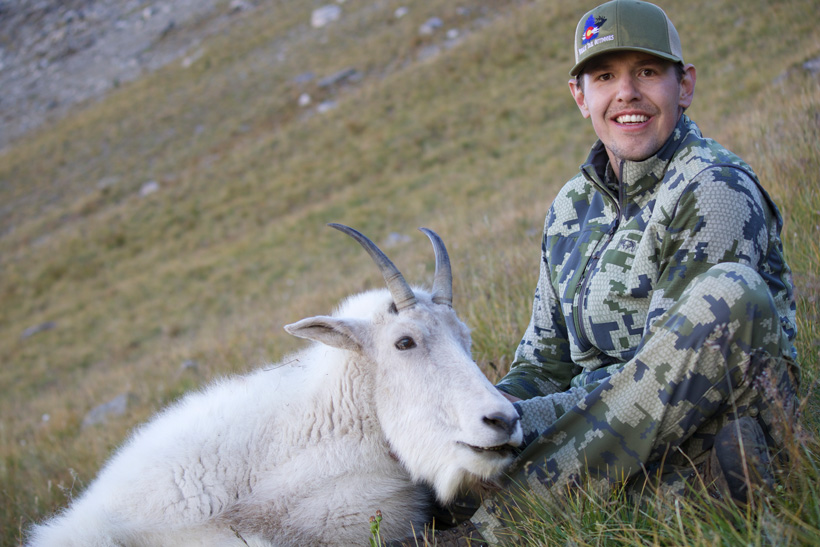 As the goat came to rest at the bottom of the chute, we made our way to a game trail and started the steep trek down. I could not believe how steep the chute was as we carefully progressed down the mountain. When we arrived at my goat, I thanked it for its life and promised that I would not let a bit of it go to waste. I felt so humbled to take such a magnificent animal on its terms. I so badly wanted to take a goat with my bow but was not disappointed to have harvested such a beautiful animal with my rifle. 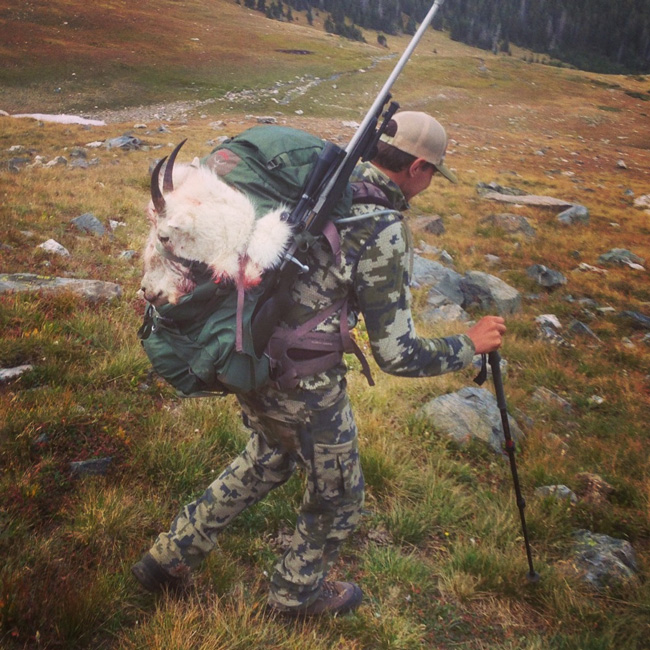 We both knew the adrenaline of the hunt would wear off soon so we found a nearby stream to hydrate and refuel before starting the torturous five mile pack out after deboning the meat and caping the hide. 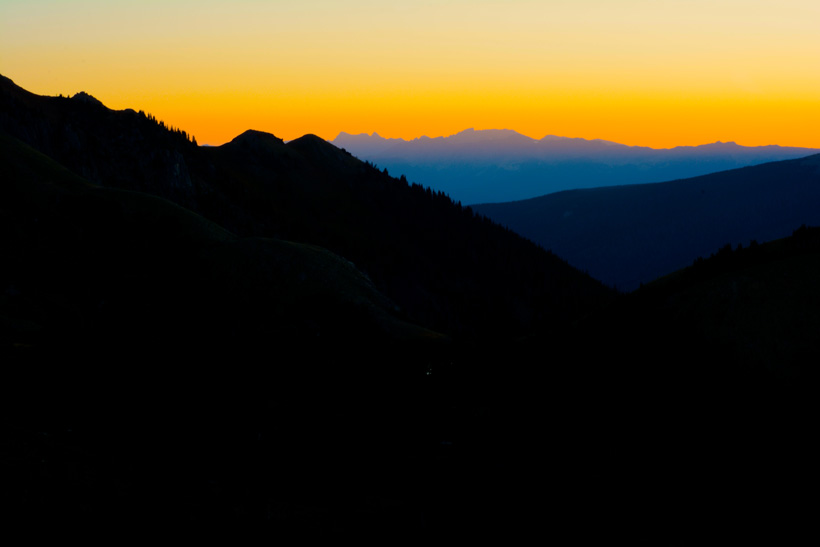 As day turned to night we found ourselves cresting back into the tree line to enjoy one of the greatest sunsets Mother Nature had to offer. As the clock struck 11 p.m., we finally arrived at the truck completely exhausted from hiking over 16 miles since the day had begun. I truly earned my mountain goat and would not have chosen to have it any other way.

Check out the video of John's mountain goat hunt below: