How one deer can change your life

In a blink of an eye a deer can change your life. For Brett Ross, this opportunity came at random on October 18 of 2014 during a cow elk hunt in Colorado. Brett was hunting for meat and happened to have a mule deer tag in his pocket, when he ended up taking one of the largest mule deer bucks of all time — solidifying his name in the hunting world. Some people would take the fame and run with it, but others, like Brett realize that this deer is worth more than money. 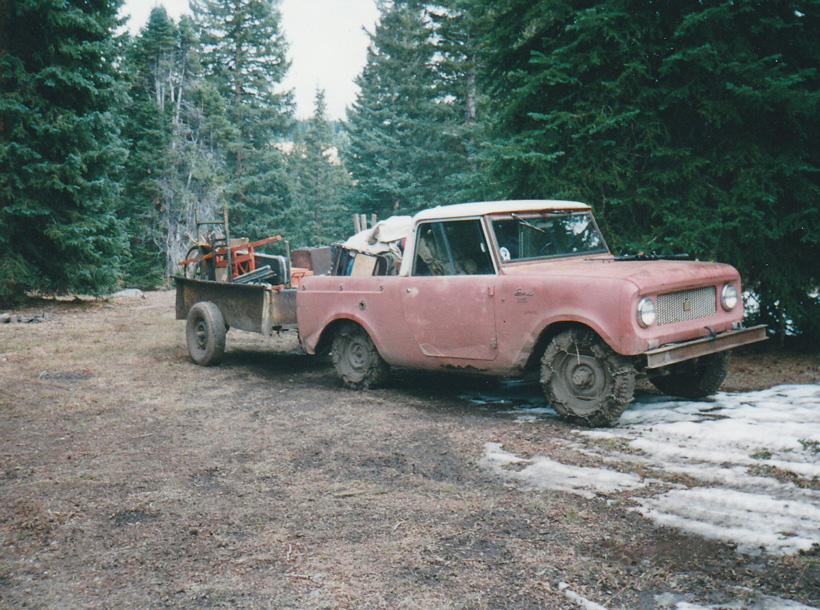 For Brett, hunting is a family tradition, and each year they head into the mountains in search of game. 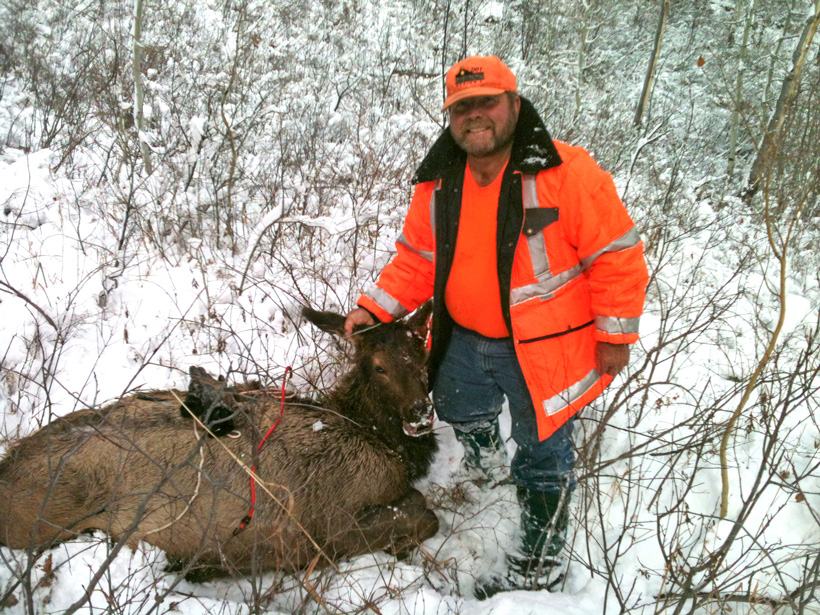 Brett's family have never been trophy hunters, but instead they are oppurtunistic hunters who are just as happy filling the freezer with elk meat rather than searching for large- antlered game. Hunting is a passion and a tradition for each member of the family. 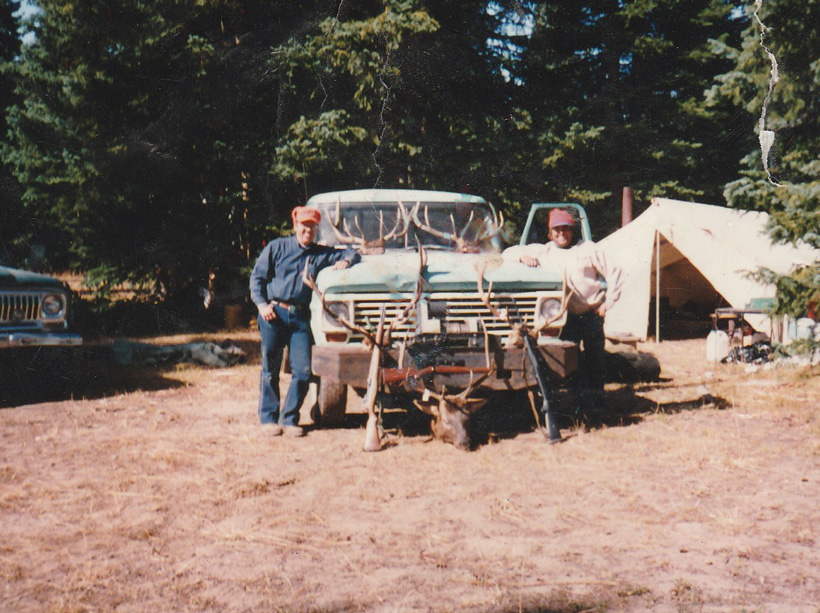 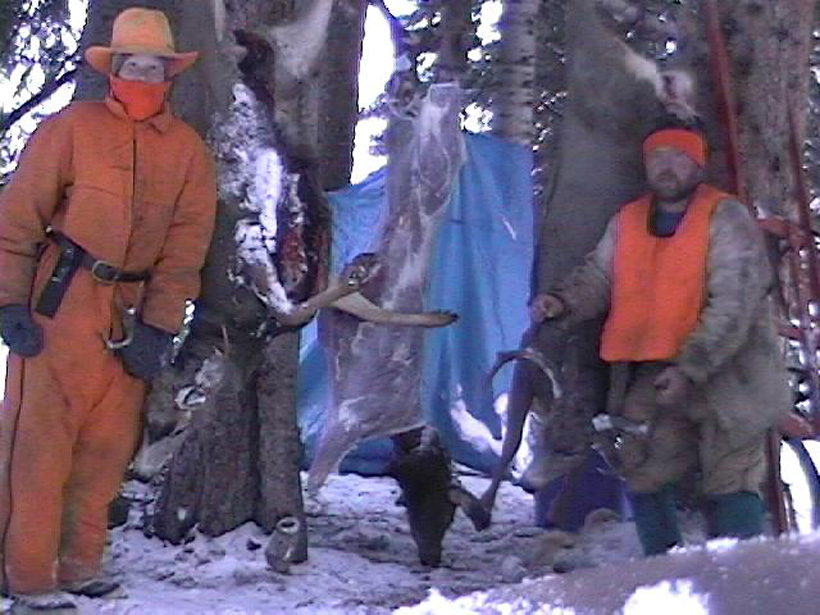 The hunt where he took the giant 300" Colorado deer was something out of dream. Brett had a camp full of great friends and family on this hunt. He was hunting the same general mountainside that his dad has hunted on for over 40 years. With the thrills of opening weekend finally upon them, Brett and his fiance split off from the group and spent the morning hiking around a very familiar part of the mountain. The morning came and went and everyone arrived back at camp for some lunch. 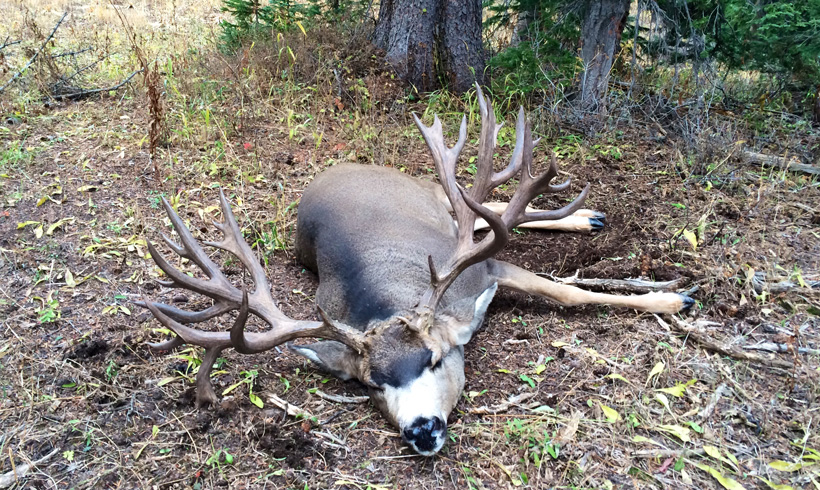 That afternoon, Brett was hunting alongside his fiance, Kirstie, and his best friend, Levi, in an area where they hoped animals would be if pressured from other nearby hunters. After walking less than a mile, they spotted a group of mule deer does, but still did not turn up many elk or bucks. It was then that Brett noticed Levi waving his arms, motioning for him to get over to him fast. Levi couldn't tell how big the buck was, he just noticed it was a legal deer. After Brett moved closer to Levi he said, "There's your buck, there's your buck!" Brett could only see a few points on the left side of buck, and Levi ranged the deer at 234 yards. Brett got as calm and collected as he could and squeezed off a shot. 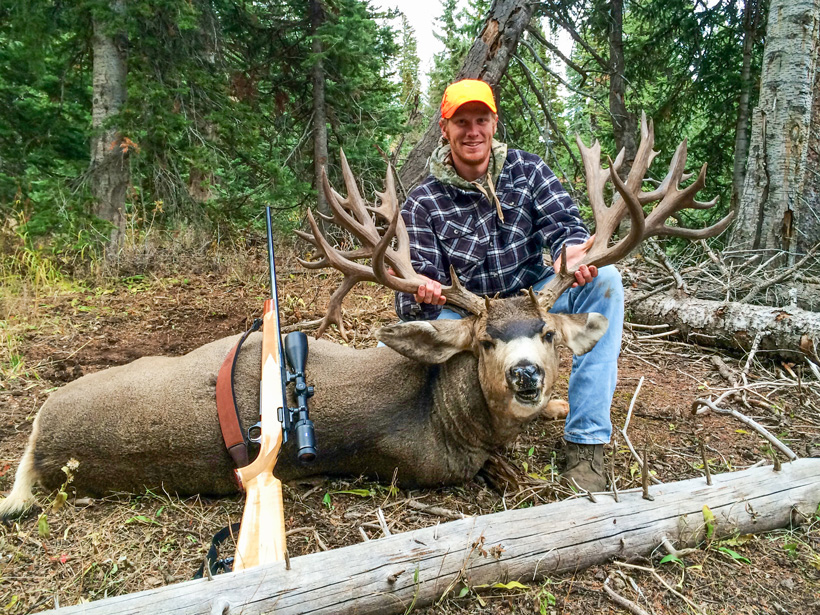 As fast as it happened, it was over and the buck was on the ground. Brett recalled the buck getting bigger and bigger as he got closer for a better look. Levi kept saying, "Man, it's going out, it's not going up, it's going out." As they approached the deer, Brett had to take a knee and put a hand on the ground. They started high fiving and fist pounding. Levi even picked Brett up and started to spin him around in circles. They were beginning to realize that they had just harvested a buck of a lifetime. 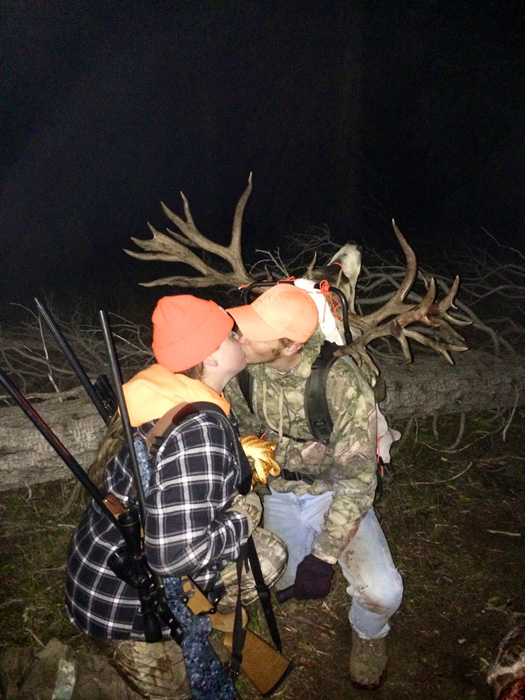 When it was all said and done, even though Brett killed a buck of a lifetime, it meant more to him that he took it on the same piece of public hunting ground that his dad has been hunting all these years. This story gives hope to all public land hunters out there — even though bucks like this are rare, especially on a do-it-yourself public land hunt you still have the chance to take a world class animal. 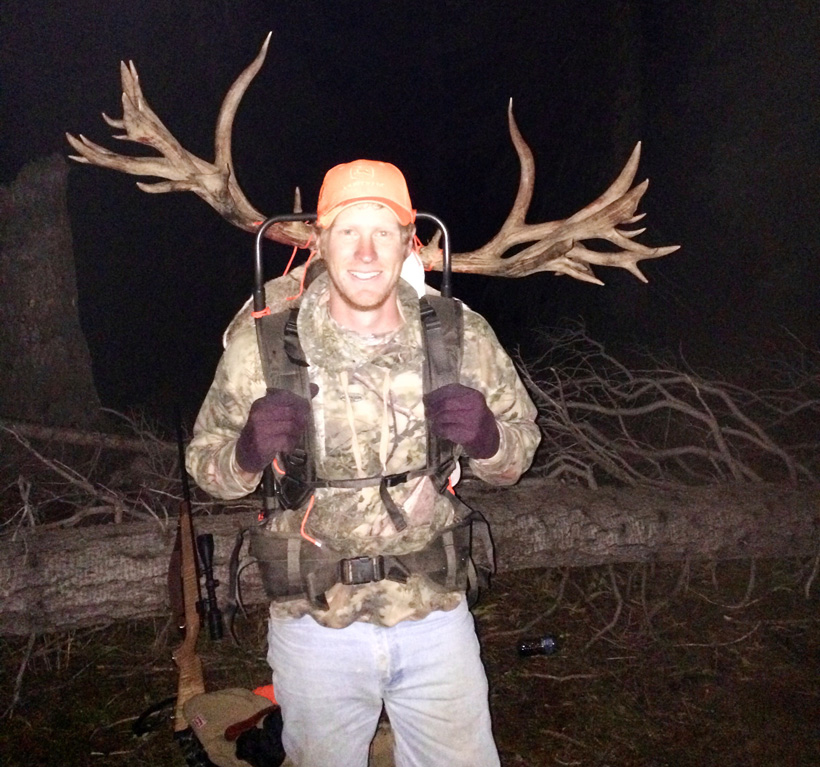 We asked Brett some questions after he saw the Colorado's Deer film for the first time:

goHUNT: What is one thing you wished made the film, and why?

Brett Ross: I really can't think of anything that was left out. Besides my wacky Ron White impression I can't imagine what you guys cut out. It's everything I could've hoped for and then some.

BR: There is one part of the video that was the most powerful for me. Pops' interview really hit me hard. I wasn't present for his interview at the time, so hearing it for the first time gave me goosebumps. Literally! Many folks that don't know him might not pick up on his mannerisms, for those that do will sense how proud he is and how this single event has been a highlight in his long and hard life. Plus, he had to admit I beat him [laughs]. Secondly, It is amazing to me how you were able to capture the excitement and enthusiasm of the story by switching back and forth between Levi and myself. I found myself reliving the events from that day. The goHUNT team did an outstanding job of being able to capture those moments and the emotions surrounding it without actually being on the hunt! 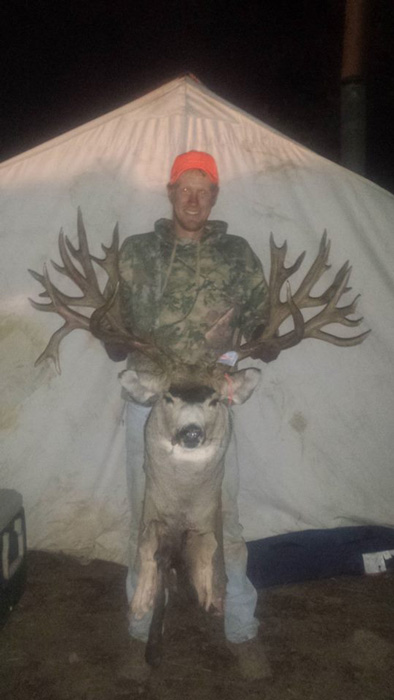 gH: How has this deer changed your life? What are you doing these days that you might not have done before "Trashy" [Brett's deer]?

BR: Trashy has changed my life in a tremendous way. I've had some of the greatest opportunities in which I would've never been presented with prior to this hunt. Over night, my life went from being a roughneck, living work-hitch to work-hitch with a passion and a love for hunting and the outdoors, to becoming a recognized face and name in the hunting community around the world. Through Trashy, I've been introduced to an ample amount of amazing folks! I've talked to my hunting icon Randy Newberg from Fresh Tracks on numerous occasions, I've got to meet Ryan and Steve from Muley Crazy, Clay Hill, Ryan Hatfield from Western Hunter… the list goes on and on. Above and beyond all, I've become great friends with you crazy goHUNT guys! It started off as a wheeling and dealing working relationship and has evolved into a close friendship in which I feel blessed to have. 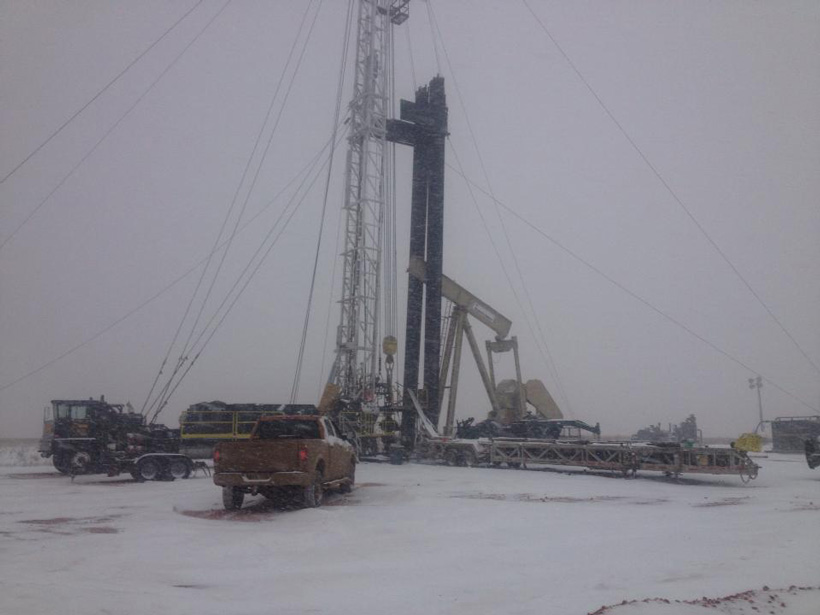 Brett works on an oil rig for Helmrich and Payne Drilling.

Since October of 2014 I've worn out a perfectly good iPhone. The calls, texts, emails and social media notifications to this day are still nonstop. Thank God I have unlimited data and rollover minutes, or I'd be screwed. Our local group Killin Time Aint Wastin Time (KTWT) has also been affected since Trashy came into the picture. What was once a pipe dream for a bunch of small town boys is now a reality. Everyday we acquire more and more support from our local community, the hunting community, social media and business owners to help our vision come to life.

We are devoted to spreading the word of hunting done right and ethically. To do so, KTWT has developed a short-term and long-term game plan to accomplish our goals. We have some extremely neat events scheduled to help us do just that. In April of 2014, we held a coyote hunting tournament in western Colorado called Howling for the Heros. All the proceeds from the tournament went to Base Camp 40, which is a local organization devoted to giving back to wounded veterans and getting them in the woods. In May, we took a wounded veteran on a bowfishing trip in Minnesota, we also have a mountain lion hunt scheduled for another wounded warrior.

The KTWT crew is constantly looking for more opportunities for the veterans that gave so much for our country. We have hunts in Wyoming, Colorado and Texas in the works as we speak. By getting great footage of these events, we are hoping to get the needed exposure to sling shot us forward. We realize that due to the exposure of Trashy this has to be our pilot year for KTWT. Next year somebody else is going to shoot the biggest buck of the year and the spotlight will dim. Lets just hope its one of the Vets we're on a hunt with! Thank you again for everything! I can't express enough my sincerity when I saw how much I treasure my relationship with you fellas! As Levi would say… I wouldn't sh*t ya… you’re my favorite turd!

We also asked goHUNT President, Lorenzo Sartini some questions after the film.

goHUNT: What is one thing you wished made the film, and why? (e.g., a scene or interview that got cut out).

Lorenzo Sartini: Brett's dad's bright orange 1974 Stingray Corvette and him peeling the tires out on it.

LS: The humbleness Brett has kept throughout the entire process and the respect he carries for the animals he hunts.

gH: Your favorite Brett quote that you remember from the video shoot?

gH: What was your first thought when you saw a picture of the deer?

LS: Holy mother of pearl, I can't quit looking at this thing... how many points did i just count?