How I found family hunting trips to be the best medicine

When I moved to upstate Pennsylvania I found some local deer hunting friends who also go out West elk hunting on public land and who are also self guided hunters. They had wall tents, wood stoves, trailers & ATVs, maps, etc. — everything they needed to self guide themselves to elk. Luckily, after hunting here in upstate Pennsylvania for deer and bear with them, they invited me out hunting with them about 10 years ago. From then on, I was ruined and the only way to cure this was more elk hunting medicine. I have now elk hunted and taken bulls in Montana, New Mexico and Colorado with both archery and rifle. 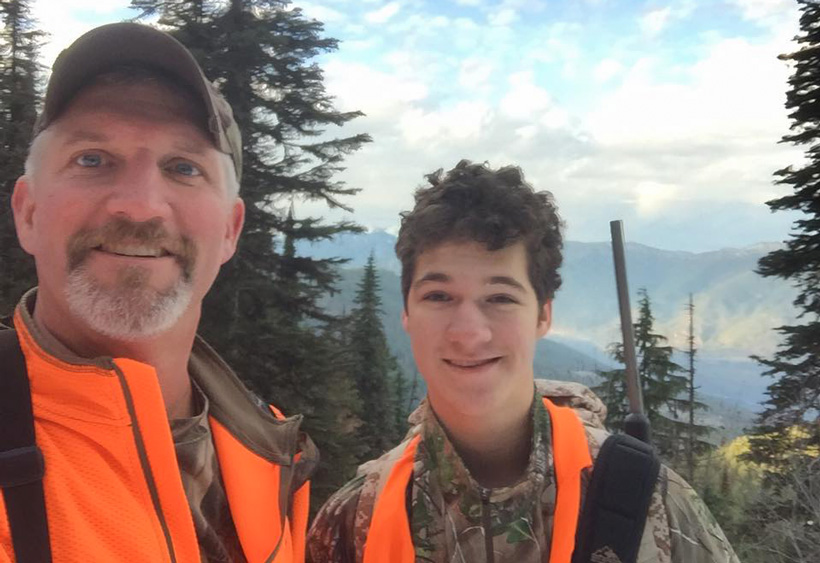 A year ago, I suggested to my wife that I should bring our son out West for a traditional elk hunt. My son is a high school senior. I thought that it may be some time before he will be able to go elk hunting after he graduates. So, last January, we hit the Pennsylvania Sportsman show in Harrisburg and found an outfitter that has horses and guides on public land for a very affordable father-son hunt.

We decided to use an outfitter from Trout Creek/Noxon Montana, North Western Montana Outfitters, who provided a guide (Galen Good) for our hunt on public land in the wilderness near Noxon, MT. We hunted the fifth and final week of the rifle season, which was Nov. 22 through 28 over Thanksgiving week. My son, David, and I had a very hard hunt, but it was enjoyable and we were successful. 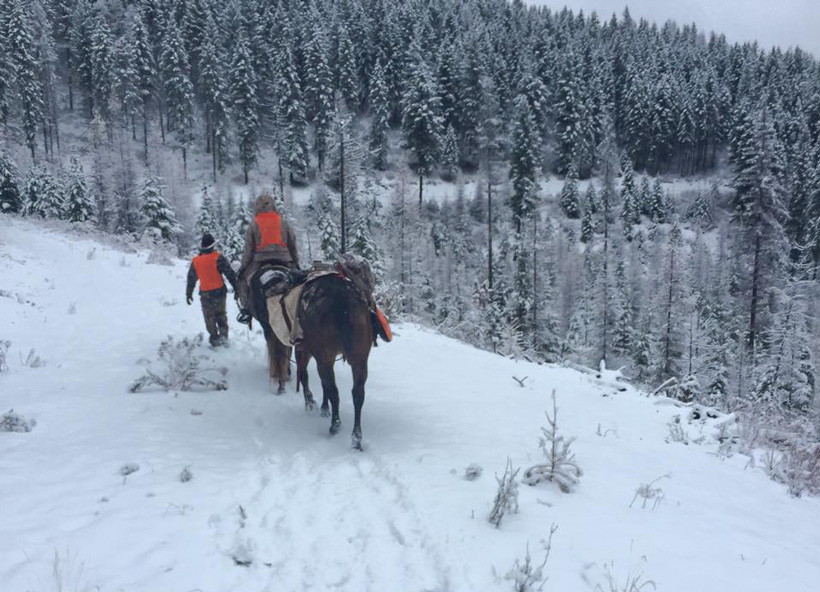 The week before we arrived, there were six elk taken by hunters with our outfitter, but then the "Full Moon" moved in and slowed down our collective hunting week. The bulls went nocturnal, feeding mostly at night. We saw a few cows, moose and deer each day, but, during the very cold days, there were only some bull sightings by others in our group.

We hunted hard and by the fourth day we even saw a spike and a smaller non-legal, bull. A few guys had opportunities at bulls, but the opportunities were few and fleeting and a few of the other hunters at the lodge had long missed shots. Only one whitetail was shot by another hunter in our group up to the last day. 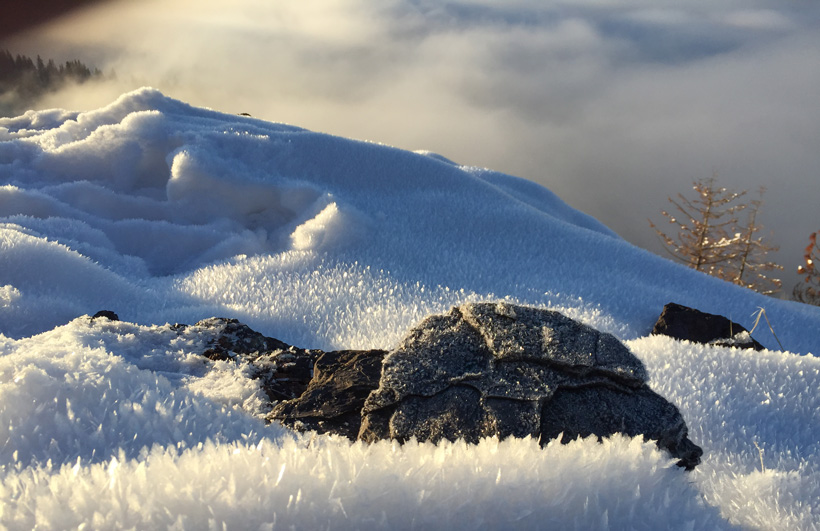 We also had some very cold weather as temperatures dipped around zero with strong winds. But it was great spending the time with my son, David. 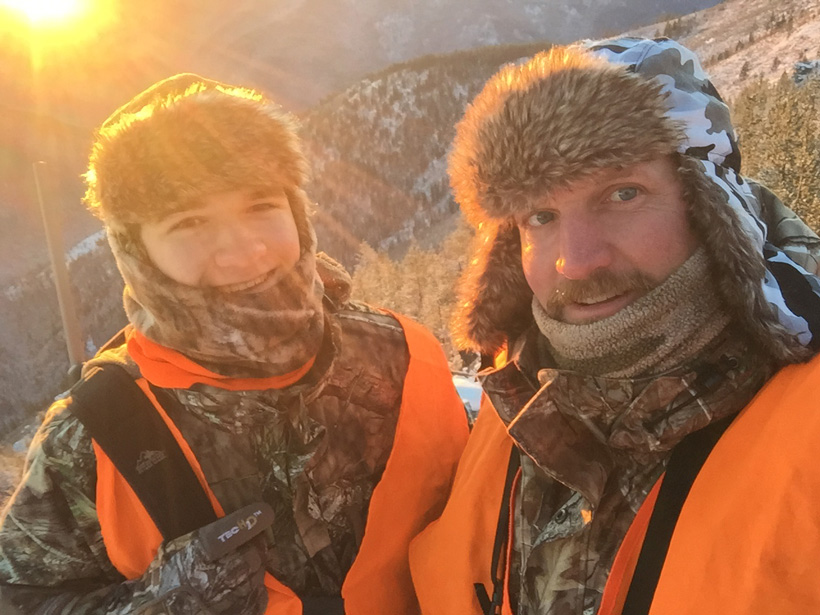 We hiked a lot, saw unbelievably beautiful mountains, sunrises and sunsets. We froze a bit and had lots to eat at the lodge, including a huge turkey dinner on Thanksgiving. We were still staying “out there,” as it's the only way to take one of these cherished bull elk.

Now exhausted from a week of cold and hard hunting, on the last day we hiked way back in the wilderness that Saturday afternoon. We went into the mountains as far as the roads could take us then hiked for miles through the snow and ice into the wilderness area. We saw moose and cow elk, along with wolf and mountain lion tracks. 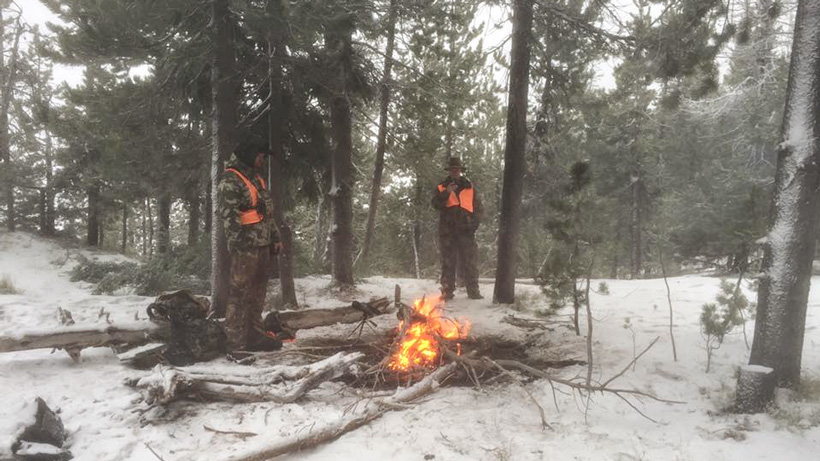 It was very cold and our guide was forced to light a fire mid-day just to warm us up. A few other groups didn't go out at all on the last day, but because it was the last day, we had to go out. Our guide was motivated and undeterred; full steam ahead. 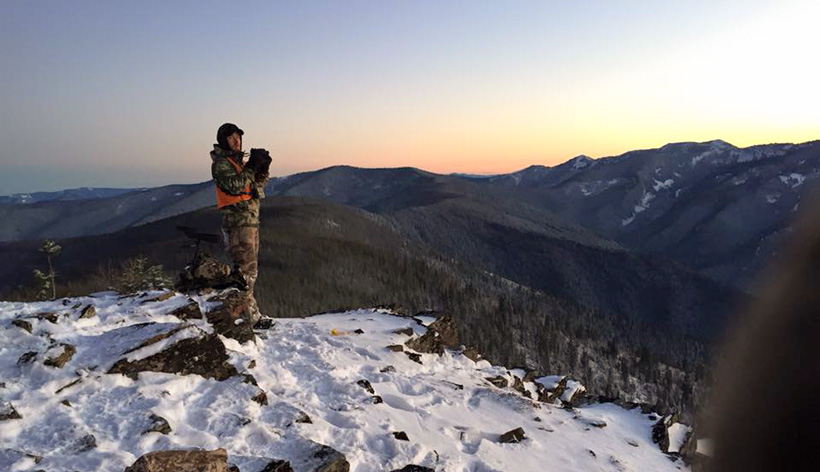 We set up on top of a remote wilderness ridgetop with a spectacular view, glassing the distant ridges for animals. We put on all of our cold weather gear to try to stay warm, but David got wet on the hike in and was freezing, but so were the elk! We stuck it out and kept on glassing for animals on the distant ridges. It was the final few hours of this year's elk hunt.

As I watched a cow elk and a moose, the guide spotted a huge bull. The cold forced this bull out into the sun and he began raking trees so he could stay warm. He was over 1,100 yards away, too long for a shot (by us).

We threw our lunch back into our packs, picked up our gear and literally ran a mile around the bowl on the opposite side of the ridge above the meadow so that he couldn't see us in order to get a closer shot. The whole time I was thinking, “No way is this bull going to still be there.” We are also sure the bull thought; "No hunter is stupid enough to be out here" as it was extremely windy with a subzero wind chill. Well, he didn't gamble on how stupid we can be!

The bull was still raking a tree as we got to the top of the ridge that he was on. We closed in at 625 yards. It was still too far. David's .308 needed to be at least 500 yards. We snuck through brush behind one of the only trees in the entire meadow and every time he fed or raked a tree, we moved in closer. Finally, at 525 yards, David and I set up so we both could shoot (525 yards is very long shot for Davie's .308 and long for my .338 too).

Just after we set up to shoot, the bull started walking to the far side of the meadow at the bottom of the ridge almost out of sight. We intended for David to shoot first. I would back him up if he missed. Unfortunately, the elk went behind that one and only tree in the meadow. David had no shot. We were about to lose sight of the bull and David said, "Go ahead and shoot, Dad.”

The guide said, "Shoot!" so I took my shot. The bull hunched up a bit when I shot and ran into the woods, but was he hit?

I was exhausted from the mile run through the snow so David and Galen hiked down the ridge through the thick brush to check for blood. I glassed on my binoculars, watching them as they followed a very weak blood trail into the woods. After they went into the woods, I couldn't believe it; the elk popped in and out of the woods, twice trying to elude them.

Davie and Galen searched and found his bedding area, tons of rubs, etc. While in the woodline, they spotted the elk, but couldn’t get a shot. On their way out, they pushed the bull back out into the meadow. I couldn't believe it… the bull started to run in my direction! All I saw was huge antlers running on top of the ridge. But I couldn’t shoot as my son and the guide were in the woods behind him. 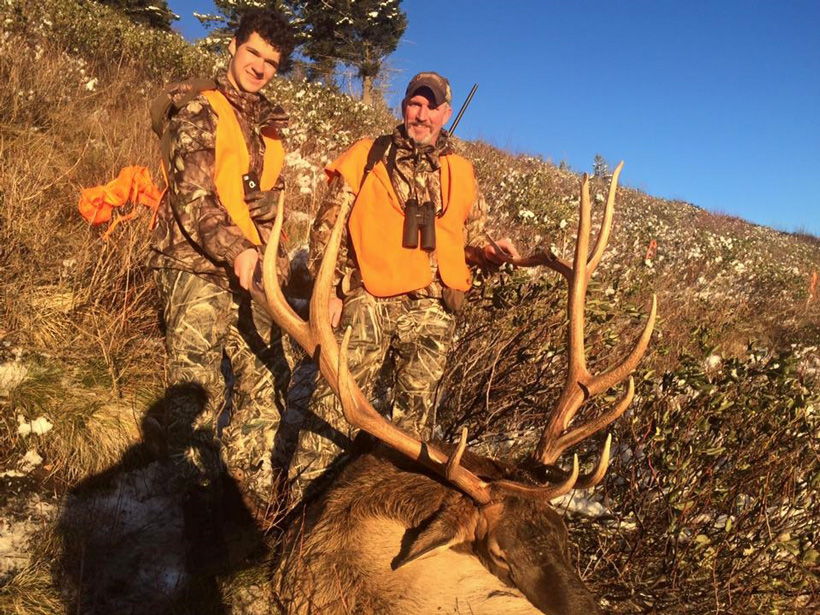 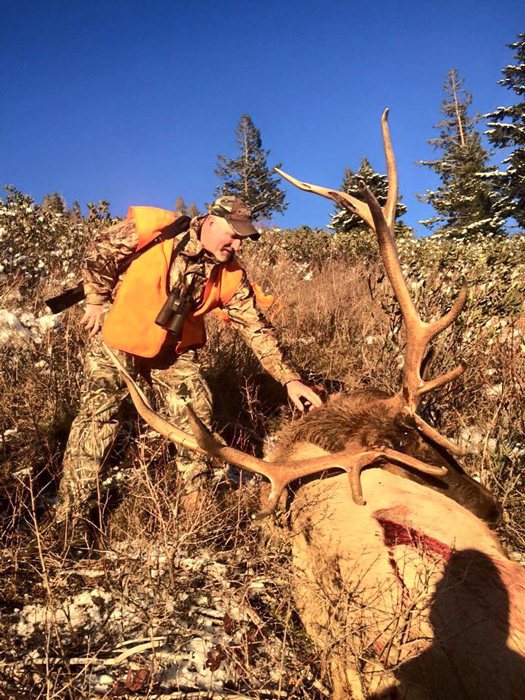 I switched from my binoculars to my gun as the bull ran right toward the tree that I was under (the only one on the ridge) and I took a shot at 20 yards! My scope was still on 16 power, so I found tan color and I emptied my gun at 20 to 30 yards! I reloaded and I took the fourth and fifth final shots. The elk went down a mere 40 yards from me! All I could hear was David and Galen screaming as they ran back to me. 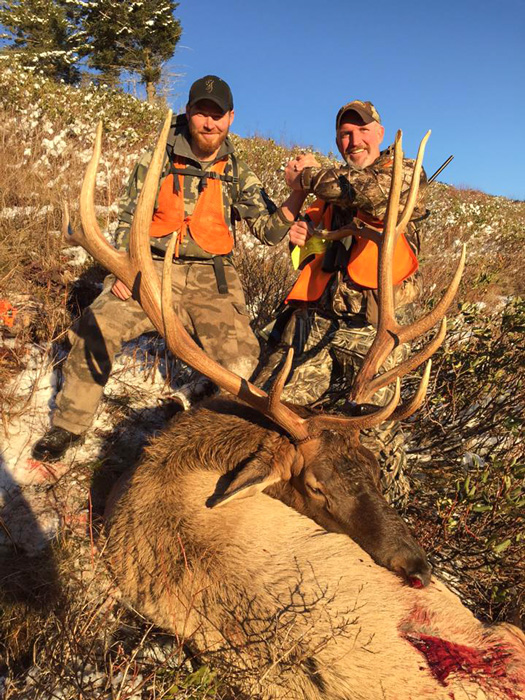 I had just taken a huge bull from the wilderness of northwest Montana on public land with only minutes left in the season. 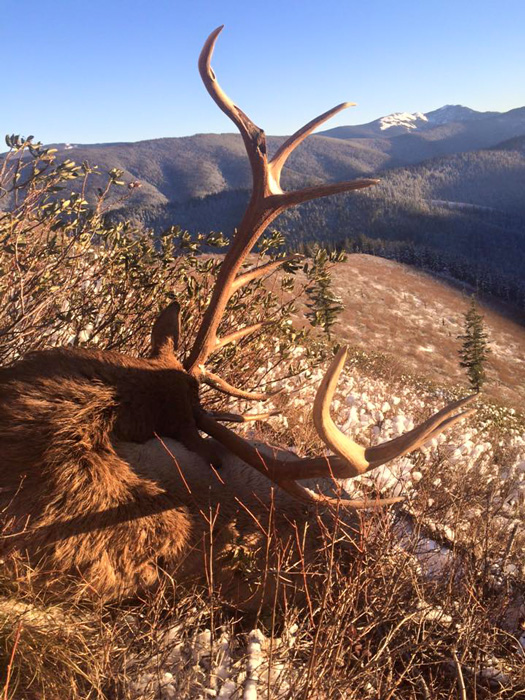 This bull was an old 7x6 with a broken tine. I estimated a gross score of 320” to 330". We would not have taken the bull if David and Galen didn't head into woods after my absolute exhaustion. What a great father and son hunt! Our guide told us that he may have won the big bull of the year contest between the other guides! 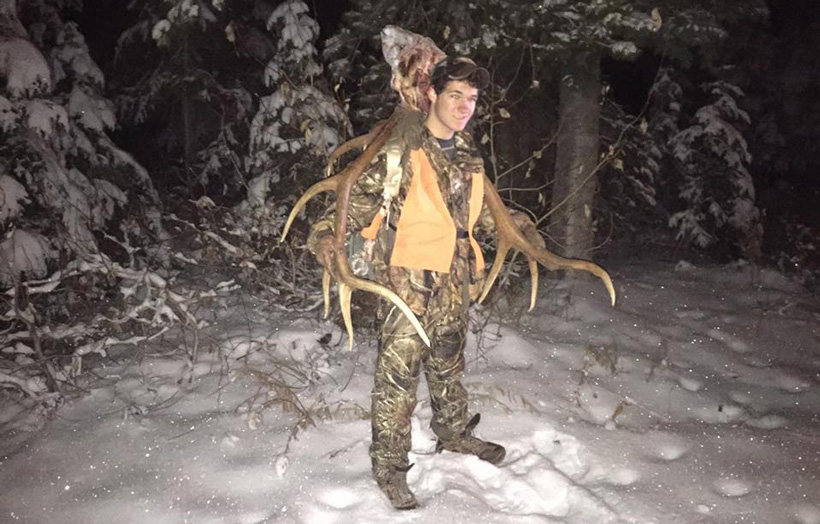 On the first pack out, we were followed by wolves, which was very unnerving. Hearing the footsteps behind us and seeing the eyes flash when we direct our lights to the side was daunting. The long pack out lasted way into Saturday night. We left on Sunday morning at 7 a.m., mere hours after getting back to camp. The guide and outfitter were such a great group, even before "closing the deal." In the end it wasn't elk hunting that was the medicine cure to my western addiction, it was hunting elk with my son. We went home with a true father-son memory, a trophy, new friends and we had the time of our lives.