Finally catching up with the old '57 Chevy bull 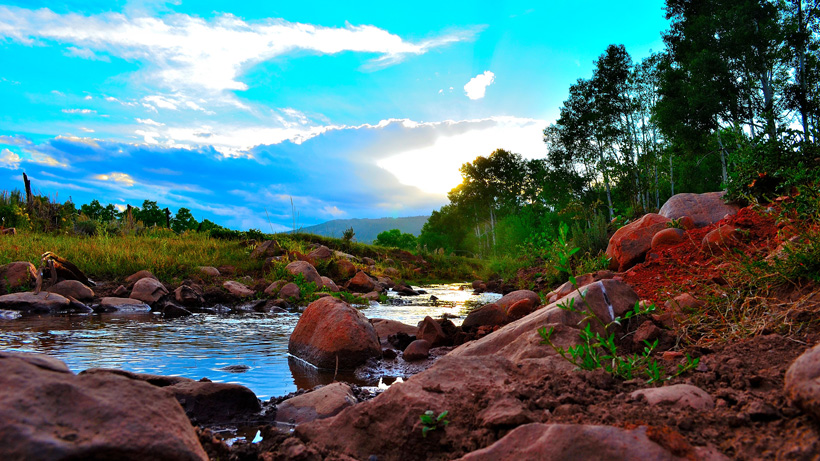 Coming into 2016 I knew I had really good odds of drawing a Utah Limited Entry archery elk tag. My only concern was that this would be my third year archery hunting and I wasn’t sure that I had the experience to hunt big mature bulls with a bow. My good friend, Jeff, assured me that we would get it done and I had what it would take!

We all know when it comes to hunting nothing is definite or automatic. I decided to apply and, when the draw results came in, sure enough I had a tag in hand. 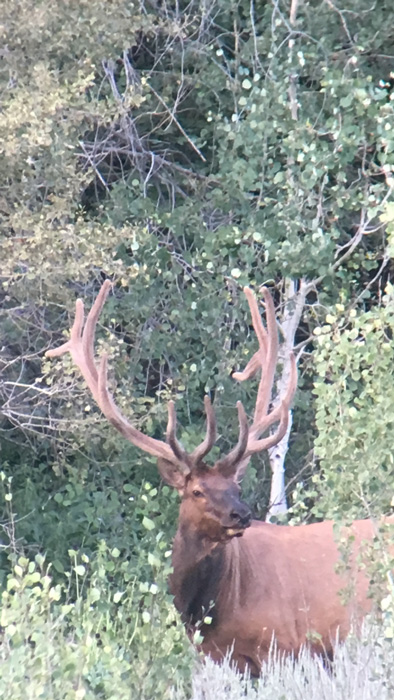 We knew of two really good areas for elk and we started scouting hard in one of the areas where we have helped take out a few bulls in the past. But our normally patterned bulls were not the right caliber and the numbers we were used to seeing in our main area seemed low so we decided to check out our backup spot. I’m glad that we did because switching locations proved to be the key to my success. 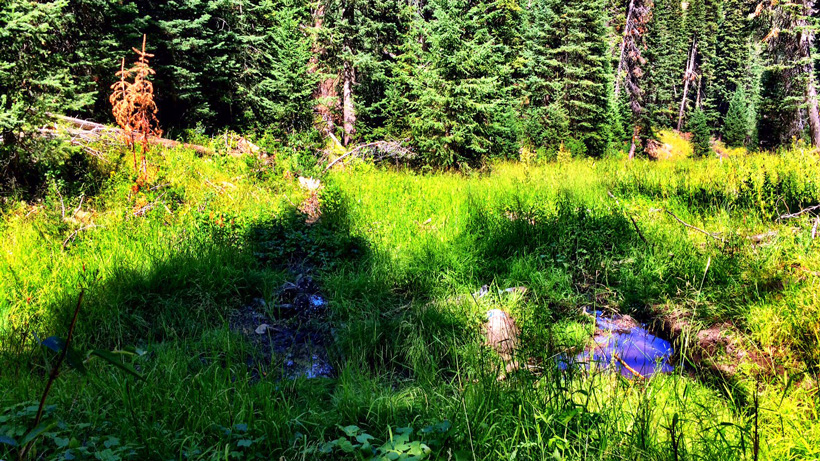 We found an untouched area with no trail cameras and no boot tracks that I can only describe as an elk mecca. We dubbed the canyon “Wallow World.” All hunters love to nickname everything from animals to areas and we’re no different. After seeing multiple “shooter” bulls in the area, we decided to focus specifically in that area as our first spot soon became fairly popular and we knew of another camp that had two archery tags that would be hunting the same wallows and stands we were.

I should mention that I always take hunts up to the last days of the season and I planned my vacation to accommodate that. Yet, a week before the hunt, my buddy talked me into rearranging my vacation and taking the first week off, which left the middle week open. This turned out to be a very good decision!

On the first morning, we saw a very nice bull that never came into our setup. Later that evening we went to “Wallow World” and I passed on two smaller bulls. Regardless, I was ecstatic to be seeing bulls on the first day and—even better—having to make decisions whether to shoot or pass! 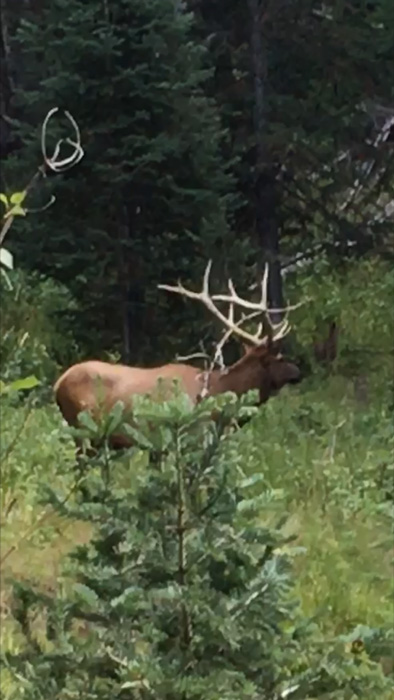 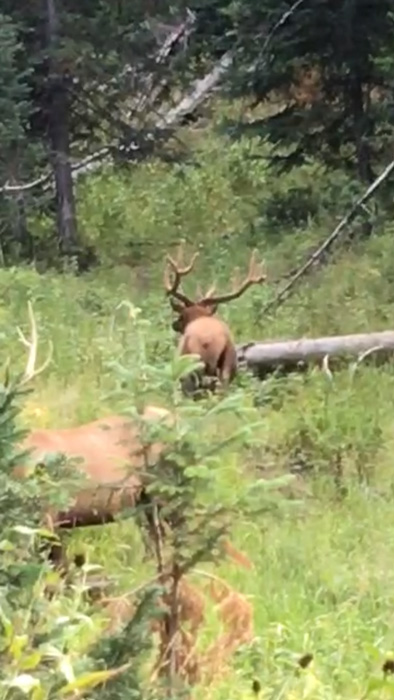 The next evening, we returned to our newly dubbed canyon “Wallow World” again to find that two new bulls had come in; one was a very nice typical long main beamed 6 point and the other was a dream velvet 5x6 main frame bull that had a 7” kicker on his 5 point side. It was a hard decision but I decided to pass on both these bulls (at 23 and 40 yards broadside). 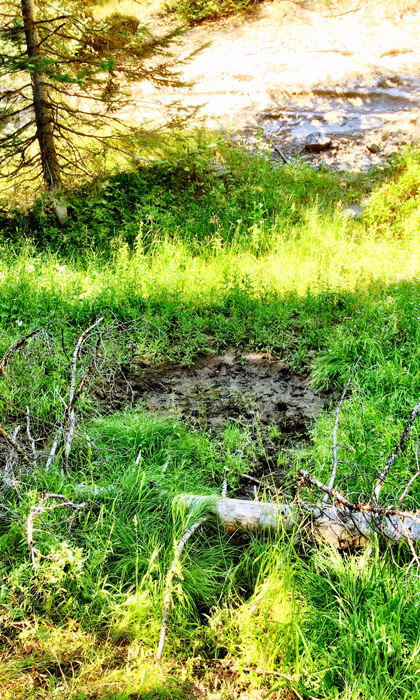 Day three was a little slower, but I did pass on another small 5 point on a different wallow that a friend took me to. On day four, we returned to what we considered “our” wallow and checked the trail cameras. We discovered that there was elk hitting the area every morning over the past few days and that is when the elk I dubbed “57 Chevy” appeared in our canyon. We’d seen this bull before, but not on camera. Finally, we got a good look at him. 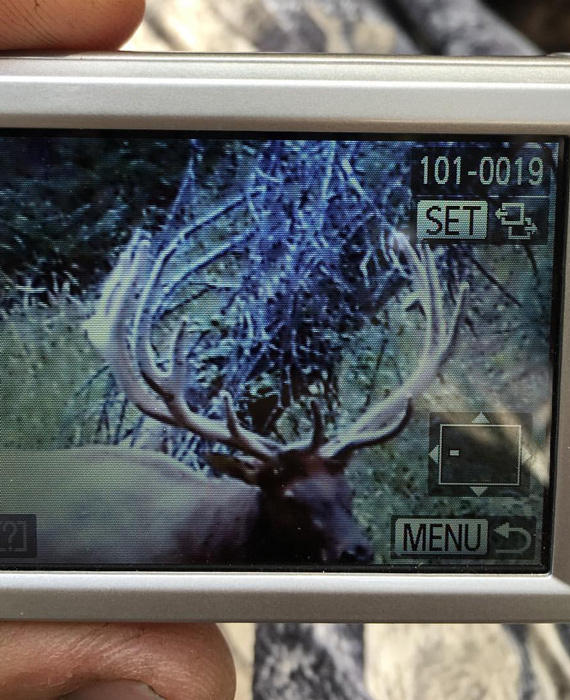 Jeff was scrolling through pictures and suddenly stopped. I knew he was looking at something good by his facial expression when he whispered to me, “You're not passing on this bull!”

I wanted him bad! I took a picture of the bull and made it my screensaver on my phone as that night was fairly slow and we had bad wind. The plan was to get up the next morning and head into “Wallow World” early!

We did and it was the slowest coldest morning to date: we were both frozen! By about 10:30 a.m., Jeff decided to go back to camp as nothing came into drink that morning. He asked if I was coming with him.

I replied, “No, I want to hunt here tonight and I really don't want to hike back in. I'm just going to sit all day.” 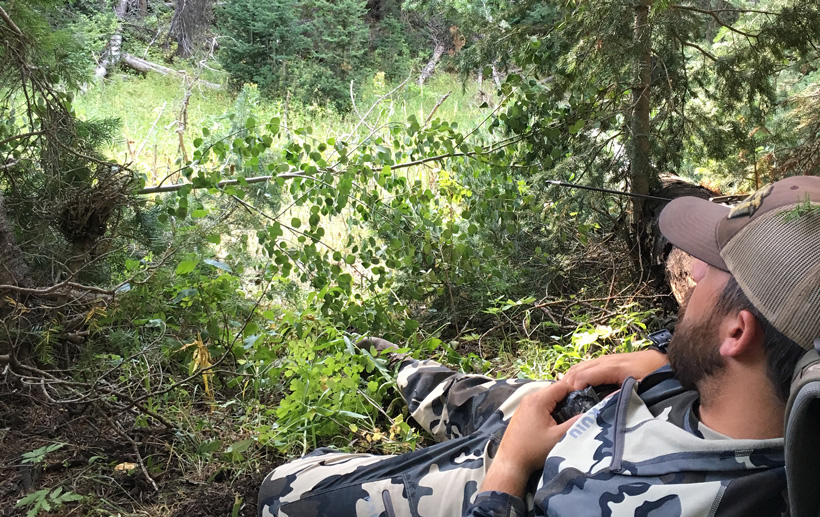 He left me his radio and left while I tried to get comfortable. I was laying down taking small naps off and on, trying to keep them to no more that 15 to 20 minutes at a time. At 2:45 p.m., I sat up and, like a dream, there was ‘57 Chevy standing broadside at 42 yards, drinking in the sunshine. I froze. As I sat up, he turned and looked right at me. Not moving, he stared in my direction for what felt like forever. Finally, he put his head back down unsettled and drank some more.

I knew he was 40 yards away, but to just to make sure, I ranged him again 42 yards, grabbed my Elite bow and clipped on my release. He picked his head up, glancing again at my location as I sat still. He flicked his ear, rolled his head, and went back to drinking.

I drew back, told myself, “Don’t even look at him, pick your spot and hit it!” I released my arrow and I knew as soon as I heard the whack that he was going down! My arrow sunk right where I wanted it to—just behind the back shoulder, fletchings deep! I watched him stagger up into the thick pines and, then, I heard a crash.

I knew I needed to give him time and I was all alone so I tried radioing Jeff, who was back at camp, but he didn’t have his radio on. Because I needed to give the bull some time, I grabbed my bag and headed back to camp. 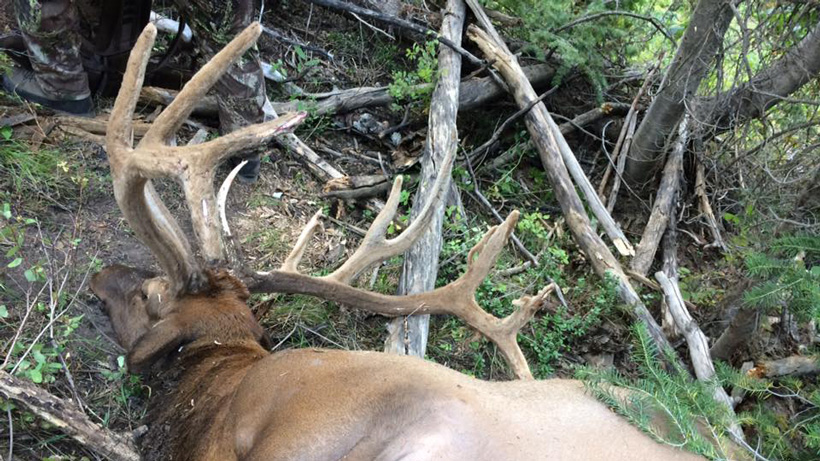 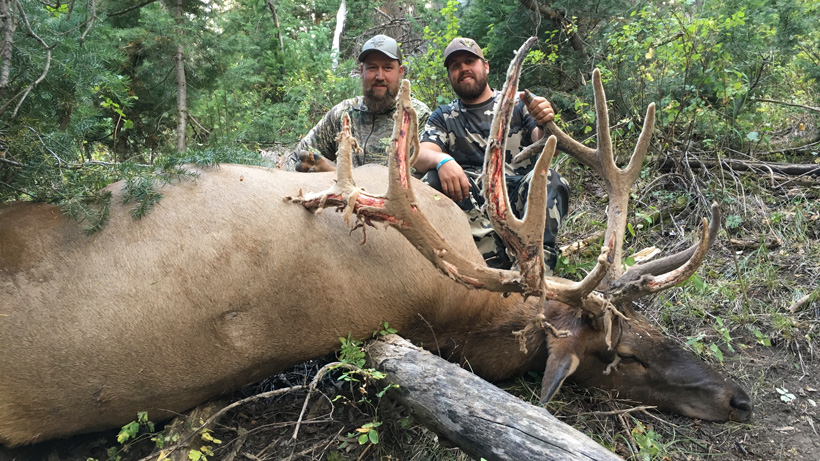 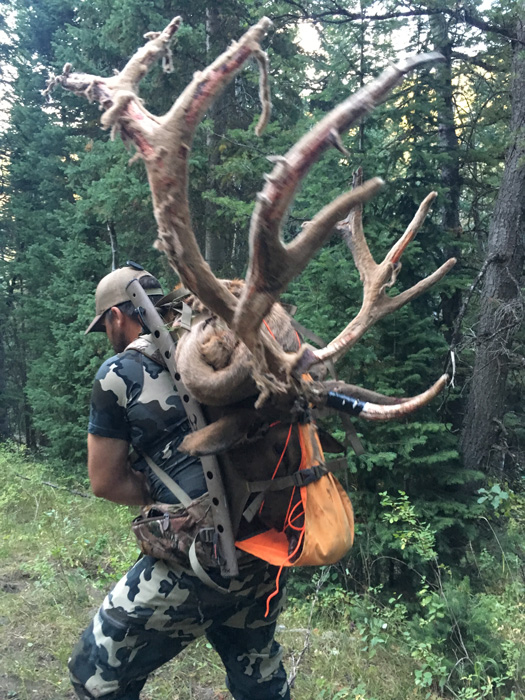 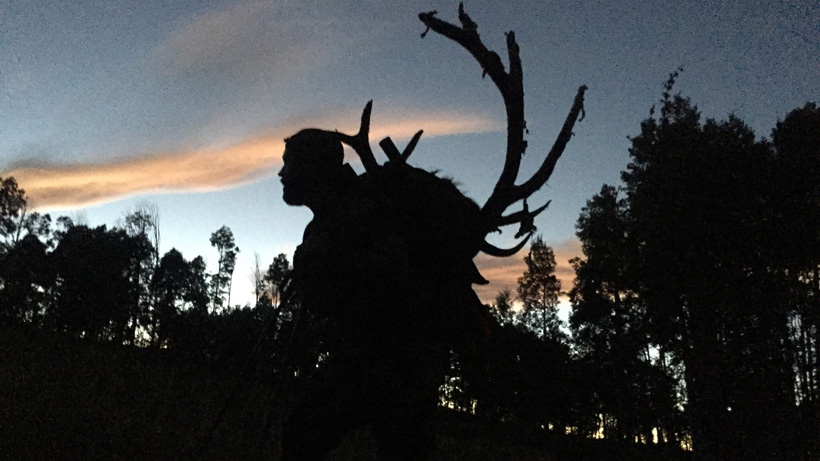 As soon as I arrived, I told Jeff how the entire event unfolded. We grabbed our packs and went in for the recovery. It didn’t take long to find him. We trailed the bull up the hill no more than 60 yards and found him in the dead fall! 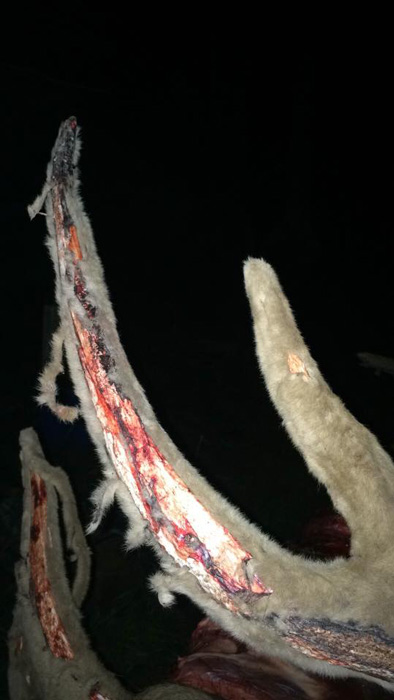 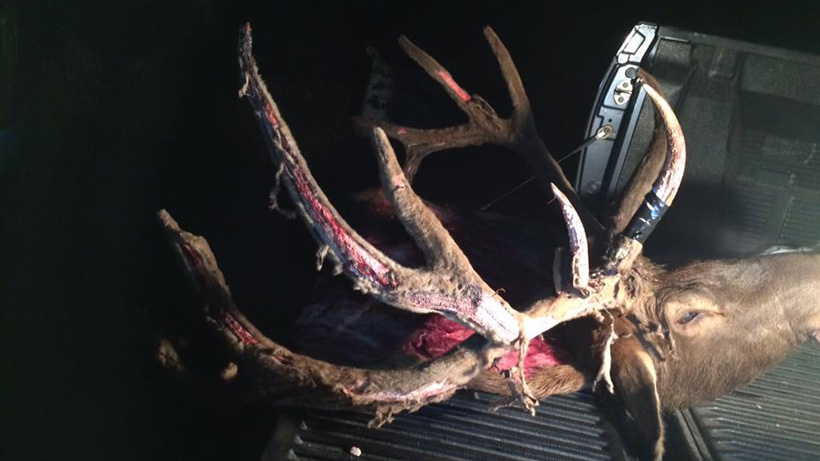 Once back at home it was time to prepare for a few more elk hunts with friends. What a great start to the season!