In the third week of January, 2014, mountains covered with snow surrounded me. I was off in pursuit of a longhaired winter mountain goat along with Bob Milligan of Coast Mountain Outfitters. Little did I know that we were going into one of the most extreme hunts of my life. 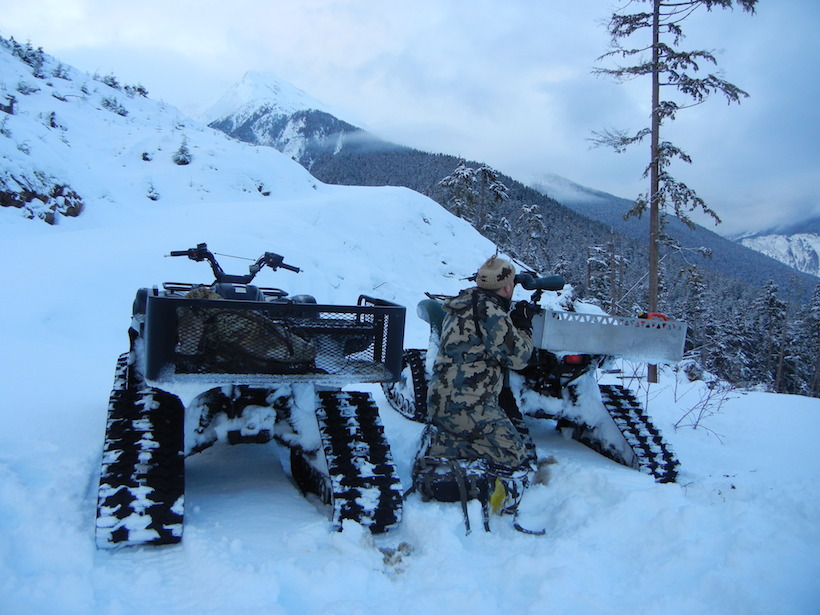 I had met Bob the previous year at a Safari Club International convention and booked a hunt with him. We were scheduled for a week-long hunt during January and utilized four-wheelers with tracks to get up old logging roads that were covered in deep snow to start glassing. 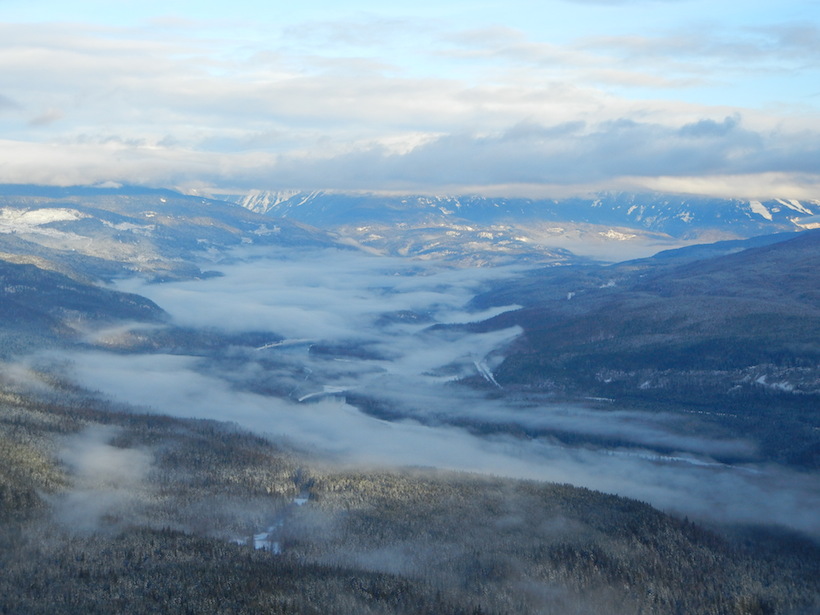 We had to get above the timberline in order to start our glassing. The sheer face of the mountains was overwhelming. Everything was just so vast. 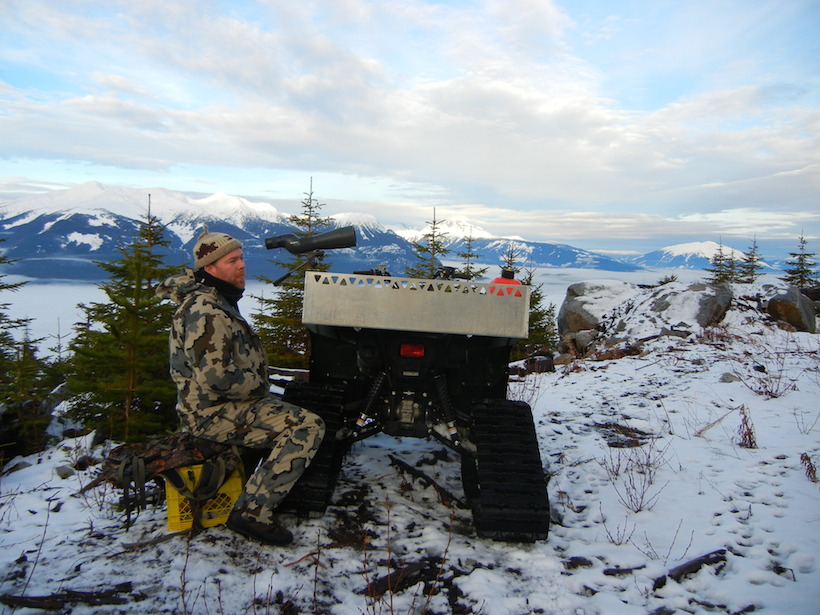 British Columbia is the only place that you can hunt mountain goats in the winter. We spent two days scouting for a billy that was 10 inches or more. 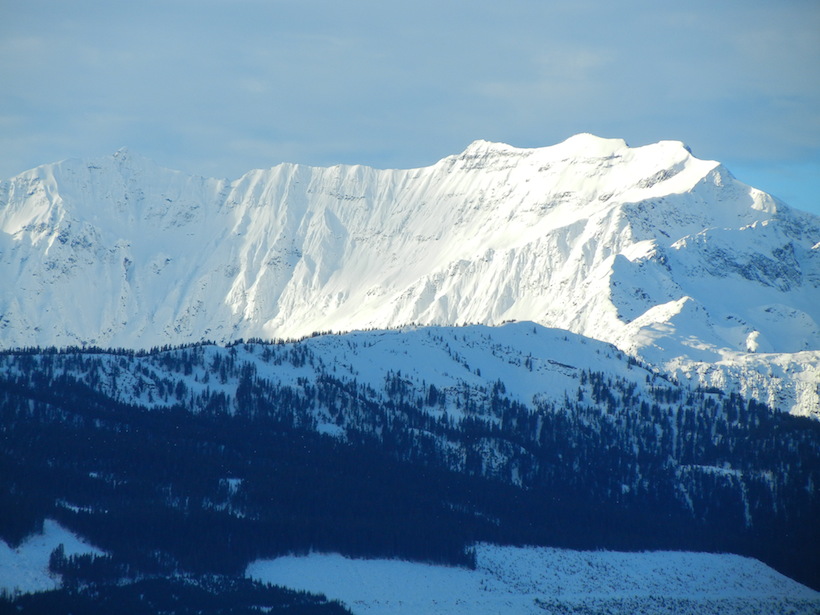 The mountains were incredible. Although the temperatures were in the 20s in the morning and 30s during the day, trekking through the snow was quite extreme. 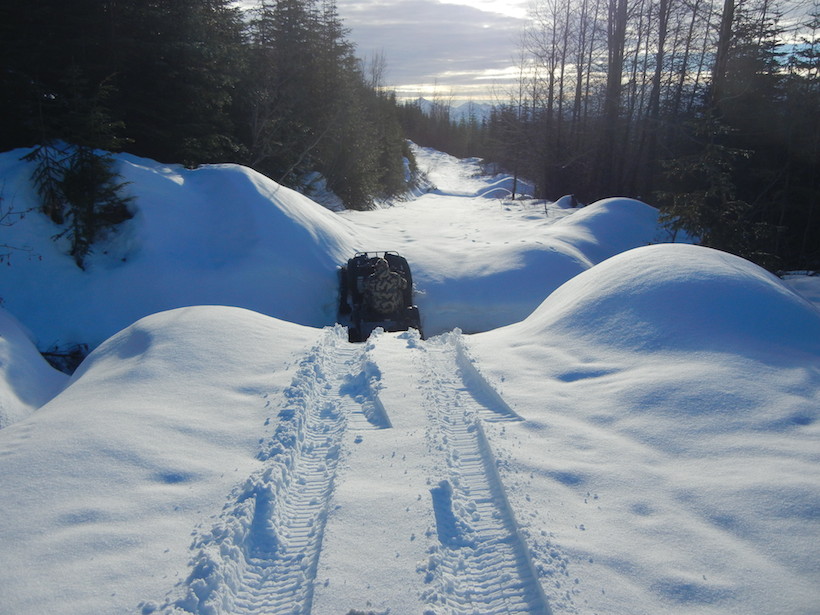 We took mountain roads on the four-wheelers as far as we could. Since mountain goats don't move around a lot in the winter, we took the chance that our target would stay in the same spot. 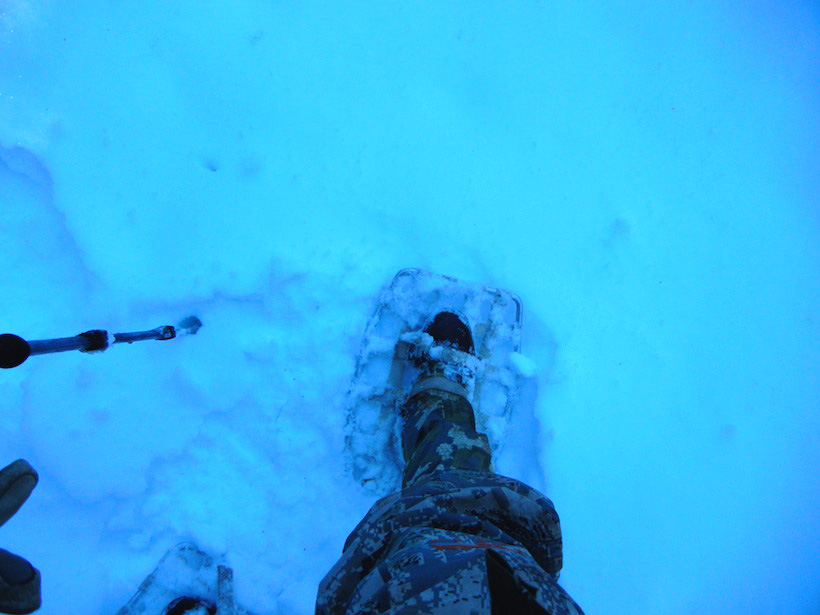 During our scouting days we found five different billies. Bob and I decided which one to pursue and it was time to start snowshoeing into the mountain tops. Bob's got some great tricks after hunting in this area for so long, like these snowshoes with picks added to them for added traction in the steep and icy slopes. It took one day of snowshoeing to make an established trail up the mountain that we would follow the next day to get back to the goats. 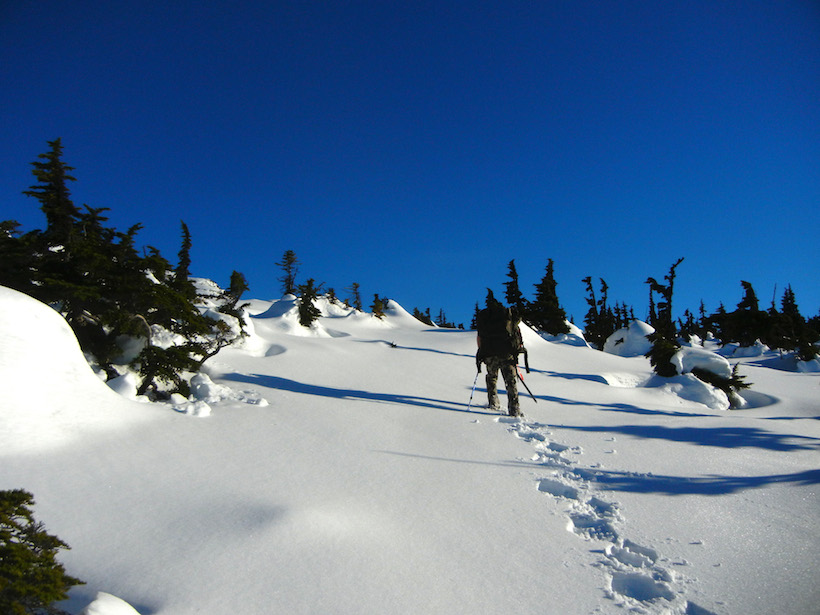 We brought food and sleeping bags to stay overnight if needed on our climb up the mountain. Bob said he thought we could go up and back in one day. He'd never had to stay overnight for a mountain goat pursuit before. 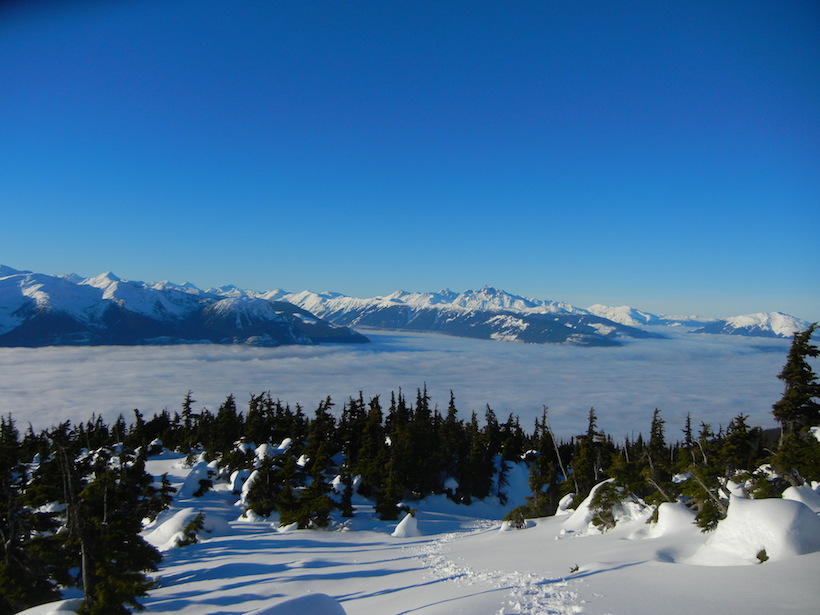 After six hours of walking we got above the treeline and to the top of the mountain we had been glassing. Backpacking in the snow above the timberline is tough. 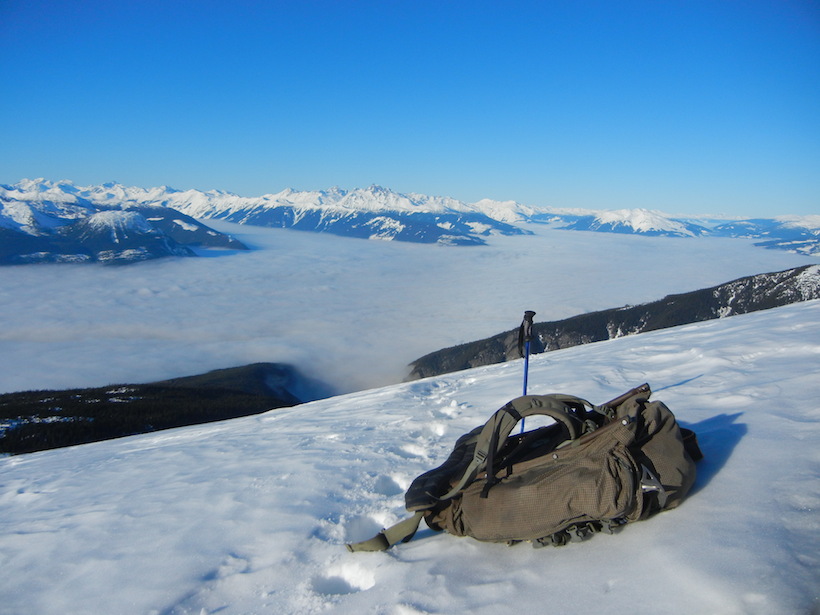 Once above the timberline it was time to start glassing again, to see if our gamble would pay off and that our billy was still in the area. There wasn't much cover up this high. 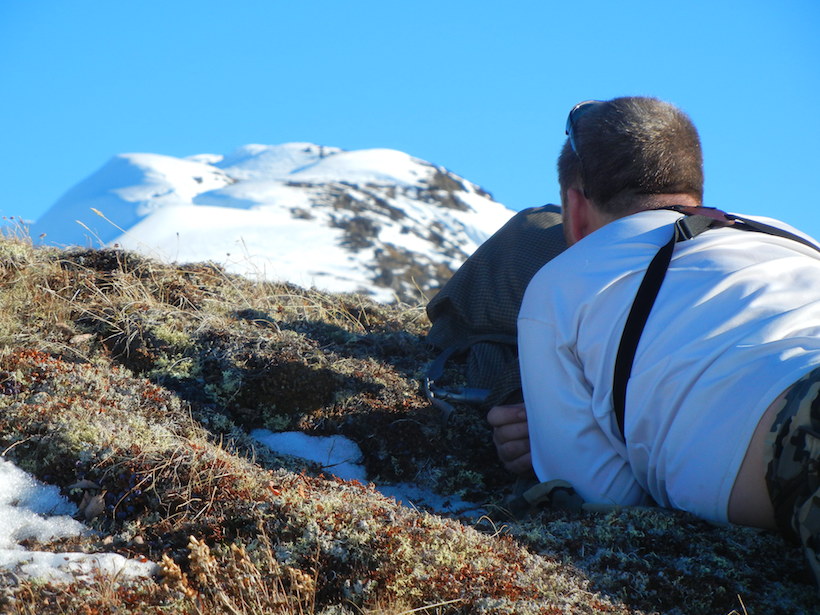 Bob glassed and found our billy again a short while later. We were caught in the open so we laid in the snow to stay hidden as long as possible. 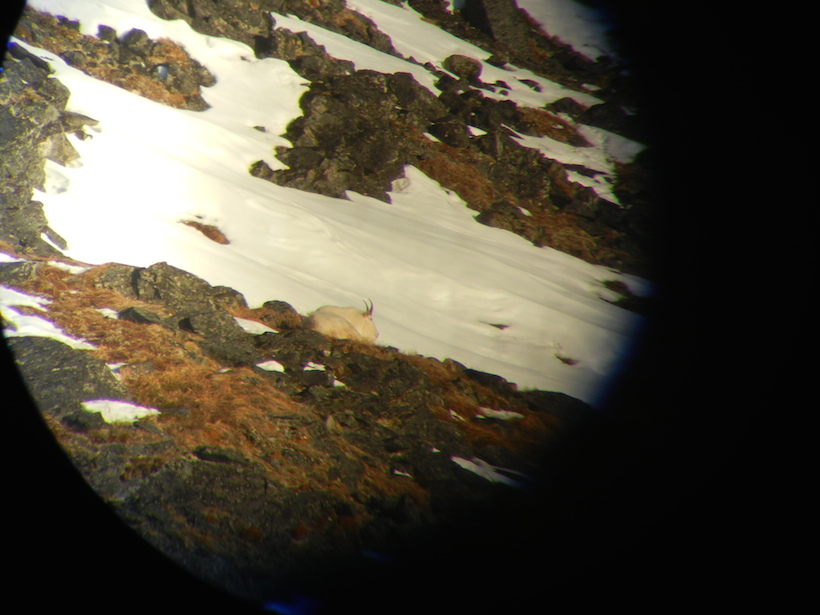 Even though we found a great billy, it was getting late. 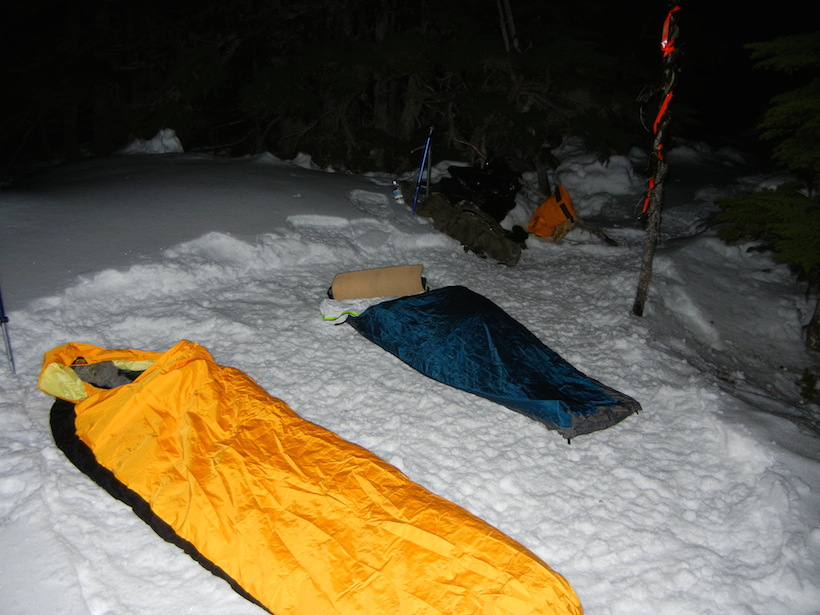 We set up camp for the night on the mountain, which consisted of packing down the snow with our snowshoes and sleeping on the snow in our bivy sacks. I was glad we were prepared! 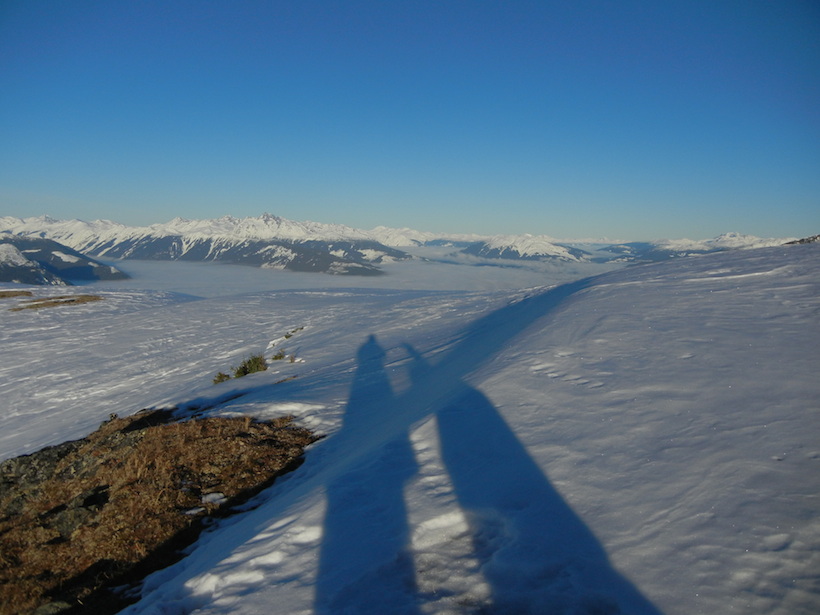 In the morning we cast long shadows on the top of the mountain. It was time to find our billy. I didn't want to stay another night on the mountain in just a sleeping bag. 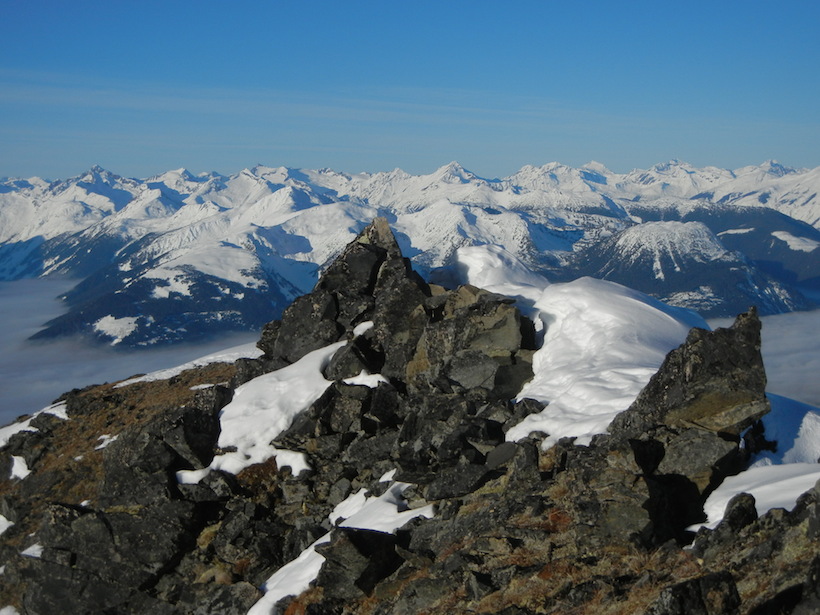 We were very fortunate for clear skies. It literally felt like we were on top of the world looking for mountain goats. 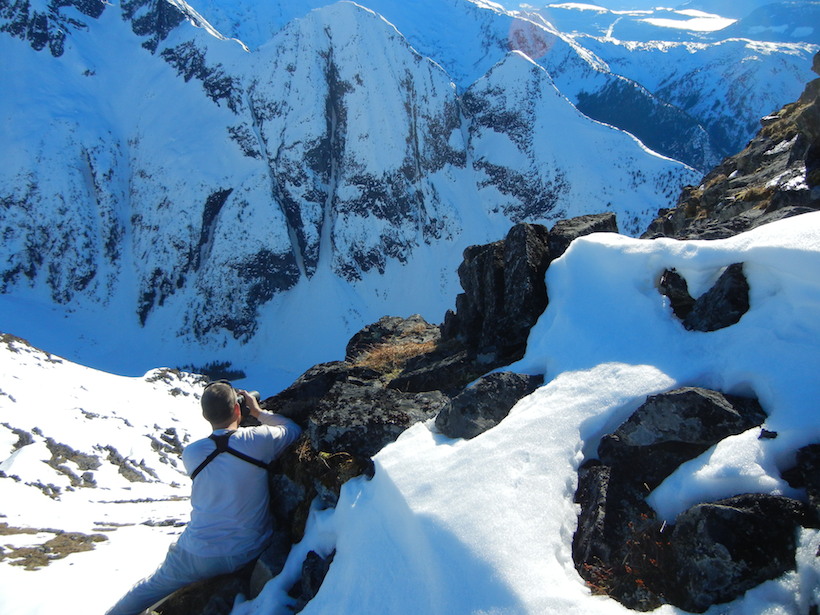 We kept hiking and glassing without locating the billy. I think the goat knew we were there. Noon came and went, then 1 p.m., 1:30 p.m. as we went deeper and deeper. 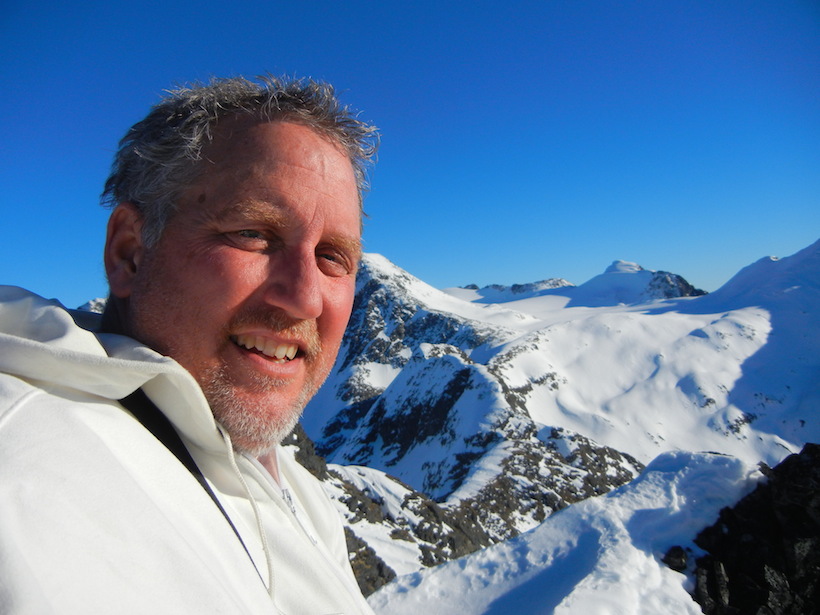 At 2:30 p.m. we finally spotted him. Words can’t describe how happy I was. 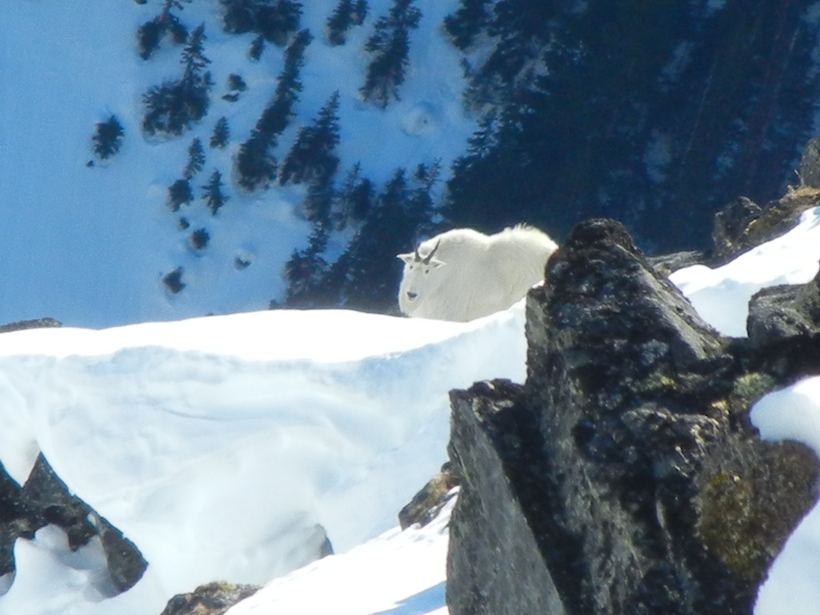 We had also spotted another great billy, but passed on him because of his position on the rocks. He would have fallen off into the abyss because of the mountain's steepness, so we elected to pass. 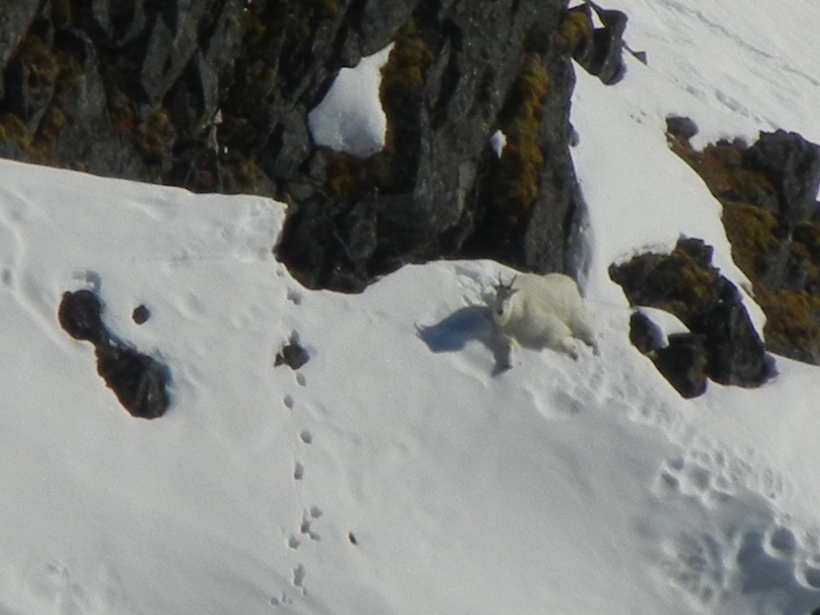 Finally it was time to set up and take the shot on the larger billy. I wanted a clean, fast harvest. 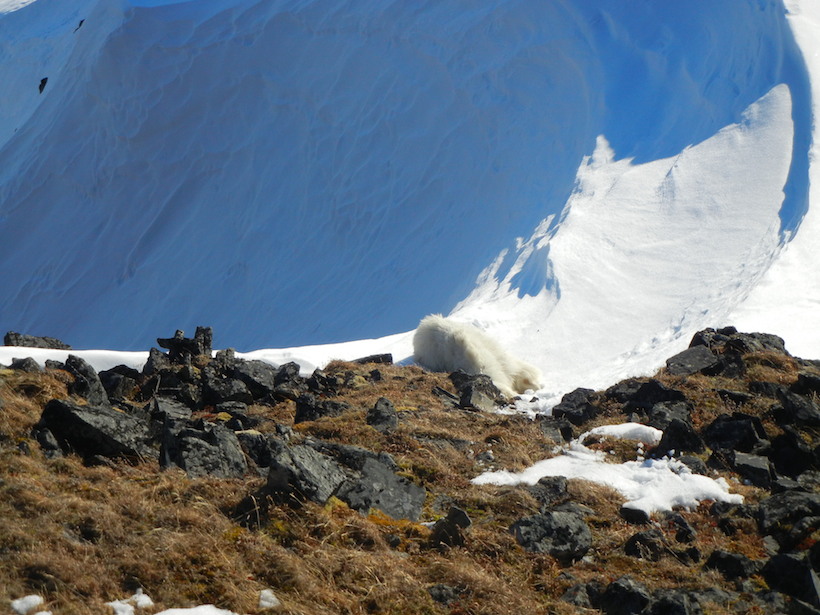 I leveled the rifle on my pack and took a deep breath and slowly exhaled part way and squeezed the trigger. The gun kicked back into my shoulder. Instantly I could see it was a successful hit! After the shot the billy almost fell into an avalanche shoot, stopping a few feet short. Luckily we were still able to recover him.

Bob and I hiked down to where the mountain goat lay. 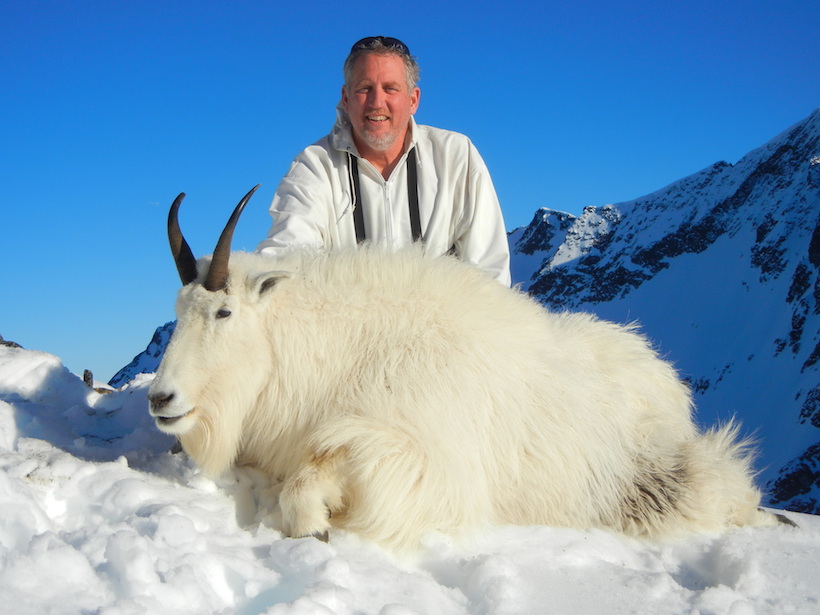 I was thrilled with my harvest. The white mountain coat in the sunshine was just beautiful. 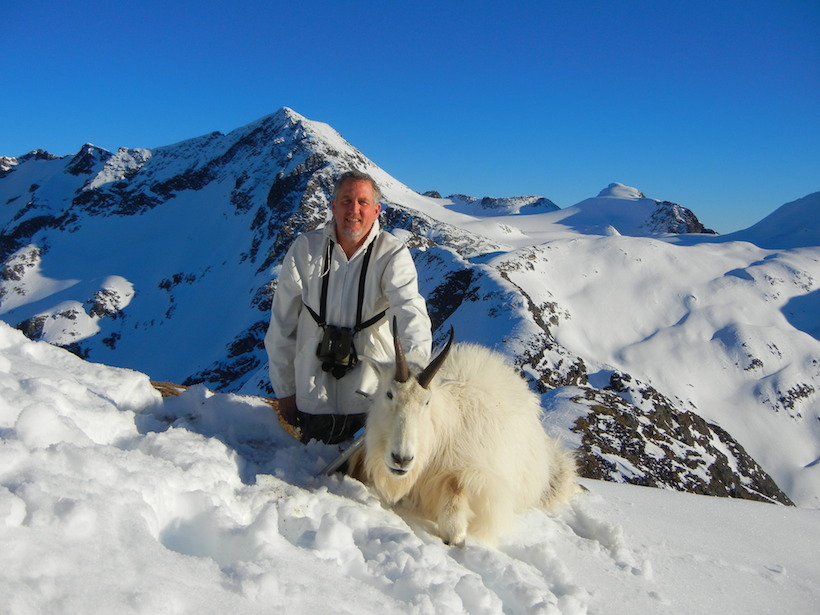 Another view of the goat showing the giant mountain scenery. 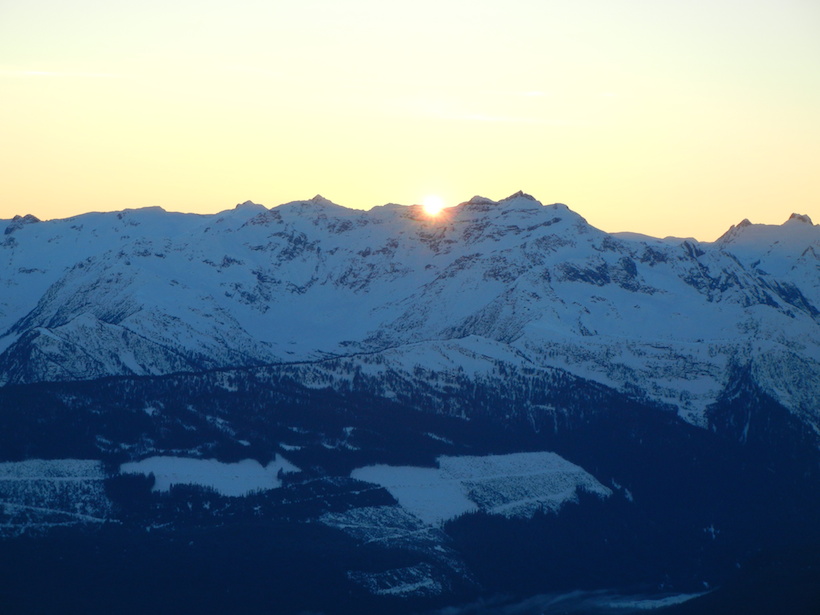 The sun was setting by the time we took a bunch of photos and got the entire goat loaded into our packs. We were finished loading our packs at 5:30 p.m. and had a long walk ahead of us in the dark with our heavy packs. 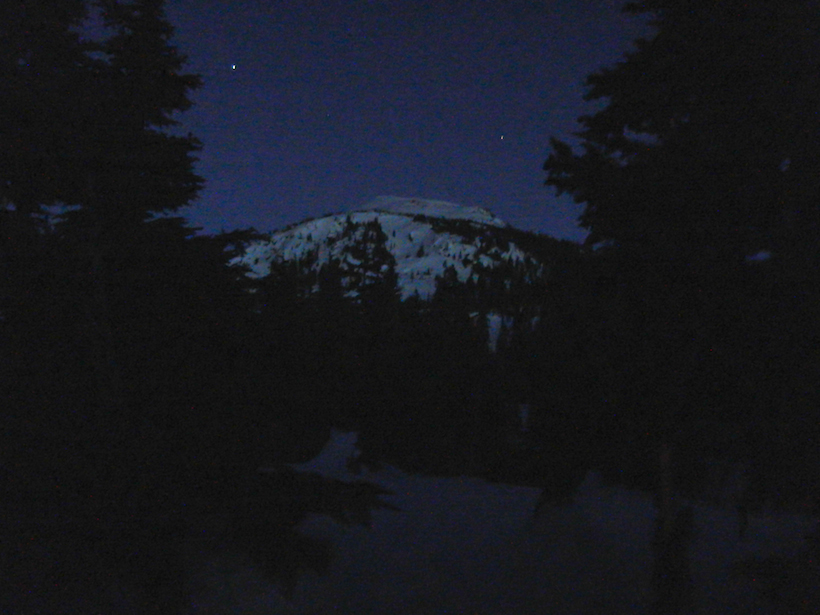 The walk down the mountain was one of the most extreme things I've ever done. It was pitch black, incredibly steep and we ate snow and ice for water to stay hydrated. We had to climb up and around the mountain in complete darkness in the snow and ice. I carried the meat from our harvest, Bob carried the cape, horns and gear. 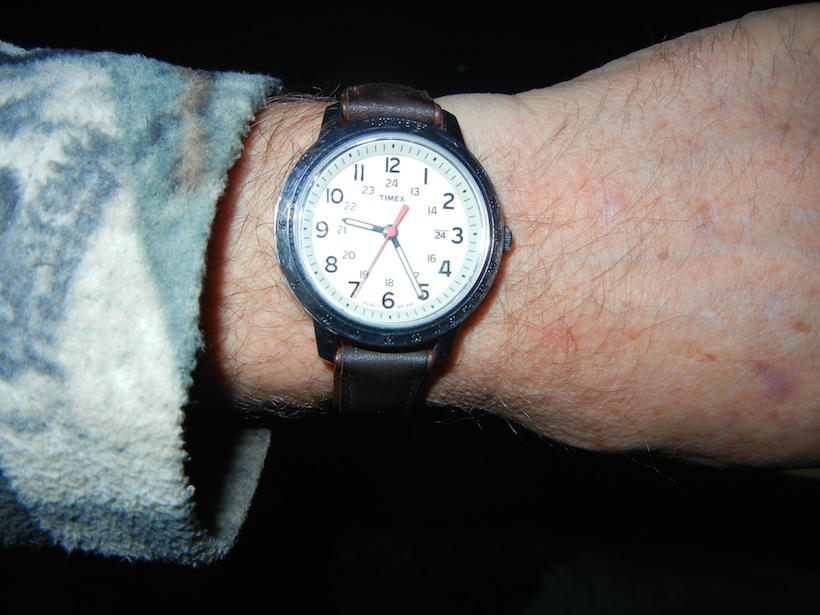 It took us about four and a half hours to get back to basecamp. I took this photo to prove the time. Then we had to get to Bob's main camp off of the mountain. It was about 2:30 a.m. when we were back in town. At his place it was time to eat some protein, drink some water and get to bed. We'd walked in the dark for at least eight and a half hours. 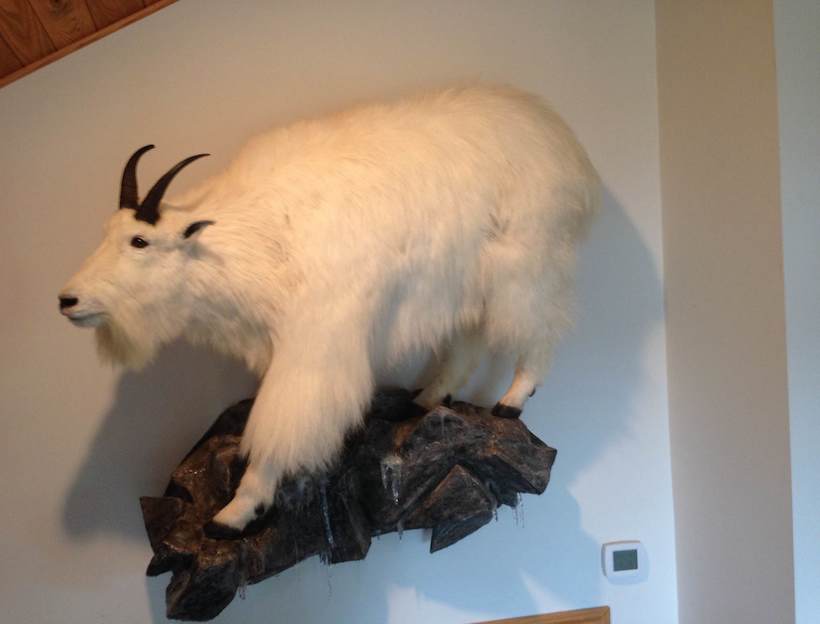 I did a full body mount of my billy and see it every day. He was an old animal with only two teeth left in the front of his mouth. Every time I see him I think about the amazing experience I had for those five days in the mountains.