Doubling up on Arizona Coues deer 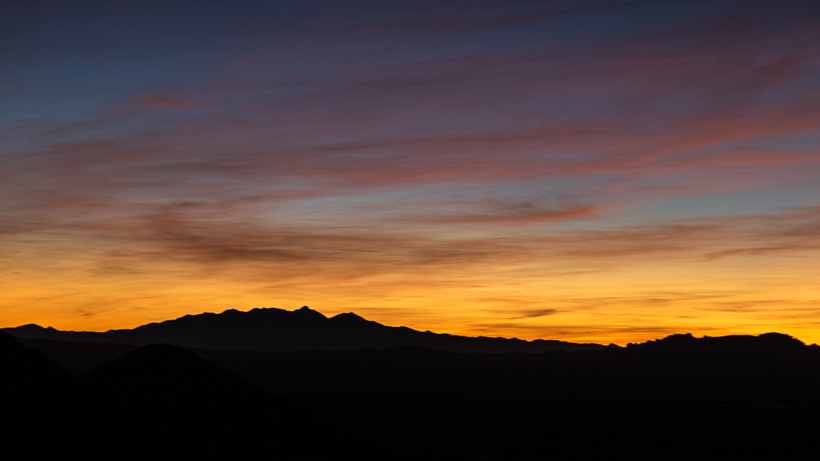 As I described in my last article “An Unforgettable Bowhunt with my Grandpa” on goHUNT.com, I took you through the ups and downs of my 2015 archery Coues deer hunt. Leaving Arizona with an unpunched tag as well as a missed opportunity at a world class buck left the fire burning as I eagerly anticipated going back in 2016.

The summer months went by incredibly slow as I prepared rigorously for my rematch with Coues deer. Knowing previously how mentally challenging this hunt was, I knew I had to be at my best. I jokingly told my friends and family that once I harvest a Coues deer with my bow I’m never hunting them again. As the summer months slowly dwindled away I got a text from one of my life long buddies at work saying, “Dude! My card just got hit by Arizona Fish and Game!” Before I even had a chance to respond I got another text from him saying, “I drew a late season rut hunt for Coues deer! With zero points!” I was beyond excited for my buddy knowing he had the same passion for these Coues deer as I did, but I also knew it would be extremely challenging for the both of us to go two for two especially since I was using a bow in late August.

I was first up to bat. As I finished my summer job and put the final touches on tuning on my equipment, I hit the road and made the 22 hour drive from Baker City, OR to southern Arizona. I hunted hard for seven days straight, sitting roughly 10 hours a day over a water hole in that blazing Arizona heat. I passed many great bucks, but I came here for a trophy. Numerous times I would sneak a picture of the bucks I was passing up and send them to my buddy who had the tag in December and would often get a reply back, saying, “You’re crazy.”

With only two days left, I was certain that I would be going back to Oregon yet again with an unpunched tag. After getting rained out of my upper blind, I was forced to move down the mountain. The rain was actually a blessing in disguise. As I was sitting in my blind trying to keep my sanity after sitting over 70 hours and not once drawing my bow, I peered over to my left and saw a grey-faced buck coming my way. With not much time to think, I drew back my bow and launched an arrow at 36 yards, making a perfect shot! As the buck disappeared, my hands were shaking uncontrollably as I was trying to call Duwane Adams owner of Duwane Adams Hunting — a goHUNT Business Member. I caught my breath and calmed myself down and I told him I finally got it done! 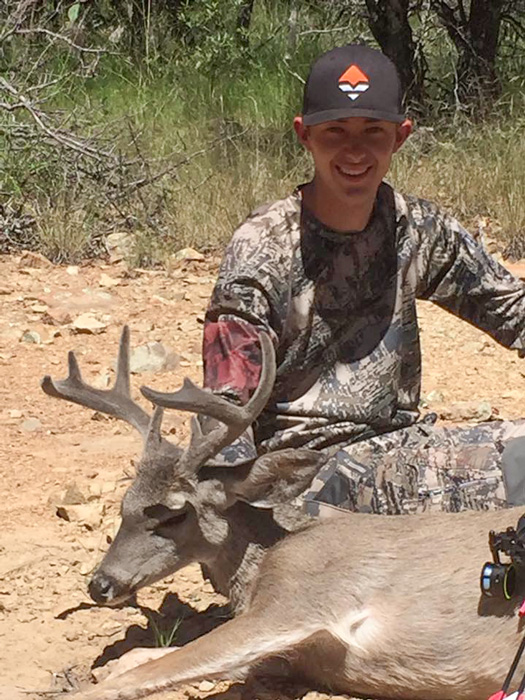 The hour wait for Duwane to meet up with me and help recover the buck seemed to take forever. We tracked the buck down the steep mountainside and found him only 55 yards from where I first shot him! As I reached down and put my hands around that grey velvet I was lost for words. I worked so hard for this moment over the last two years it all just seemed so surreal. Without the guidance from Duwane Adams and company this dream of mine would have never become a reality.

As I returned back to Oregon to head for college, I couldn’t help but think about our upcoming trip in December. My good buddy, Thomas Hamilton, who drew the tag was also at college and playing football for Portland State University. With me being at Oregon State University, this made it somewhat challenging to gear up for this hunt. One of the key resources we used was our INSIDER membership with goHUNT. We were able to use the key features it provides to help us narrow down our entire trip in a short amount of time, which was very valuable as we both had busy college schedules and upcoming final exams right before the hunt. After the stressful week of college finals, we only had two days to pack for a 10 day trip. We invited a good buddy of mine, Dane Maben, along with us on this hunt as I knew we would need all the extra eyes we could get in order to glass up these elusive “Grey Ghosts.” 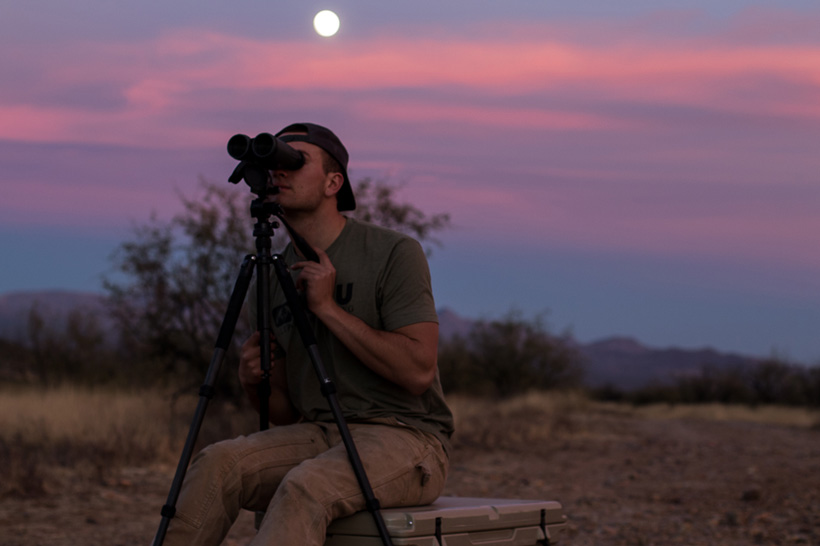 As the three of us hit the road and headed to Sasabe, AZ for winter break, we had nothing but big smiles on our faces. After the two day road trip, we had finally arrived. We set up camp as quickly as possible, laced up our boots, and wasted no time in hopes of finding Coues deer that evening. That evening we glassed up over 14 deer, but no bucks. This left us eager for the morning. The alarm rang at 4:30 a.m. We strapped on our packs and headed for a glassing point we found on a map the previous night. Right away I glassed up what looked like a great buck, but it was hard to tell just how big he was since he slipped away behind a small finger. Knowing now that there was a possible shooter in the area, we decided to play it smart and not rush anything, knowing we still had eight days to hunt. 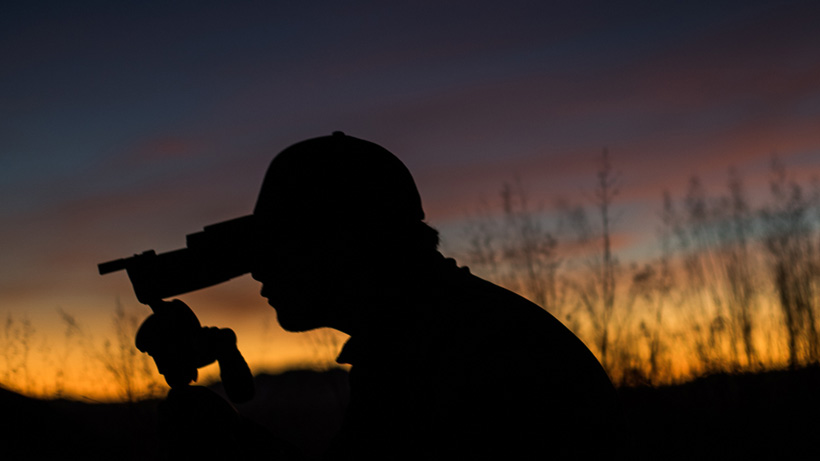 The next five days we glassed, glassed, and glassed some more, but still could not turn up that buck we saw on day one—or any buck for that matter. 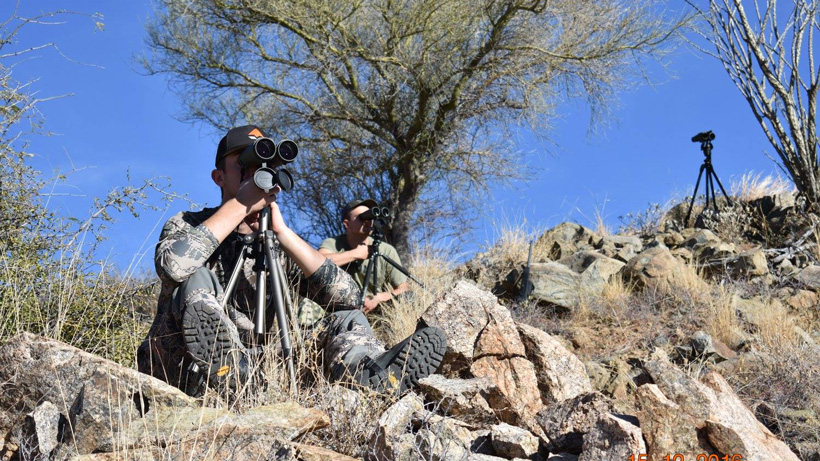 The tough part about this hunt was the number of does we were seeing. The phrase “I’ve got one… never mind it’s just a doe,” was becoming quite popular. 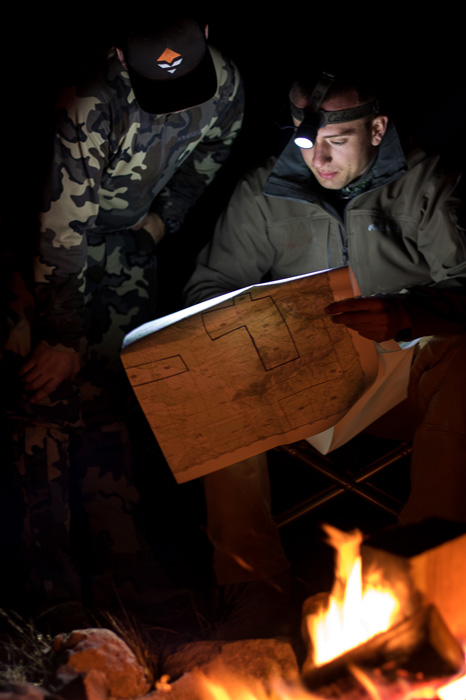 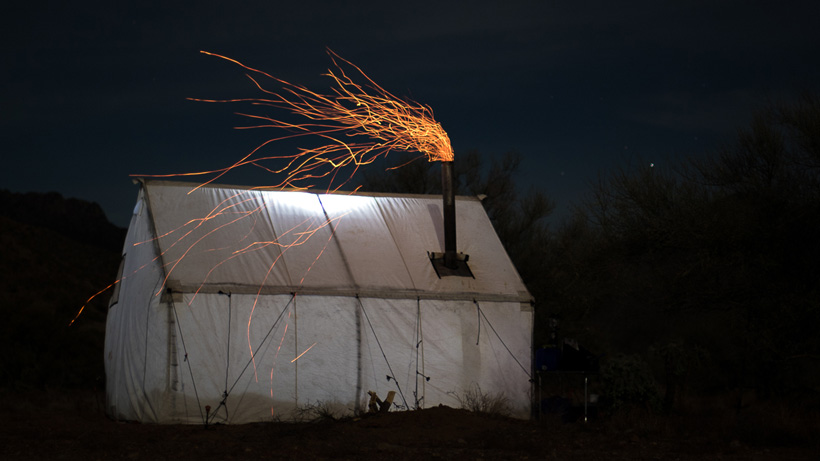 The night of day five brought strong winds, but this was not just a storm. It was basically a desert hurricane with winds of 35 mph and gusts of 45 mph. It made us concerned about finding deer. We decided as a group to go back to the area where we saw that buck on the first day and focus our attention there because that hillside was out of the wind. 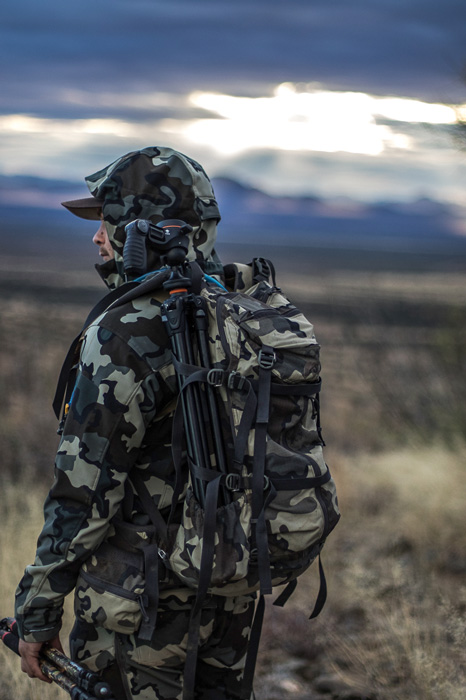 After the short hike across the desert we made it to our glassing point. Shortly after, my buddy Dane spotted that same buck. With two hours before dark we wasted no time in closing the shooting distance. Dane stayed back on the windy ridge while Thomas and I hustled into position. 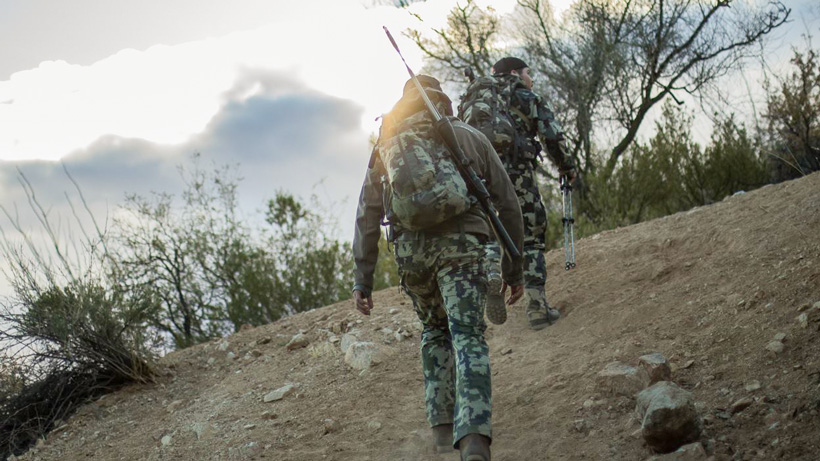 As we peered over the finger that divided us from the buck, we finally found him after 20 minutes of making sure it was the right buck. I got a range and said, “He’s 285 yards.” Shortly after, Thomas fired and missed high, but the buck still stood in the same spot, I quickly said, “You missed high shoot again.” 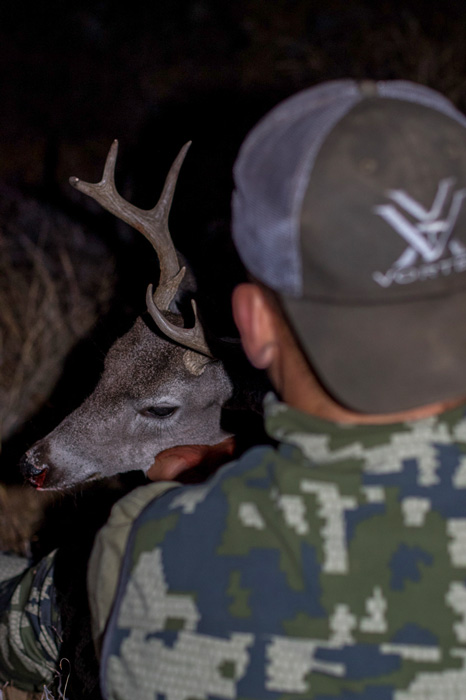 Then, whack! I heard the bullet hit and saw the Coues deer fall. As I was making sure it was down for good we could hear our buddy Dane yelling in celebration over 300 yards away! I tackled Thomas out of excitement as we celebrated what was such a mentally tough hunt. 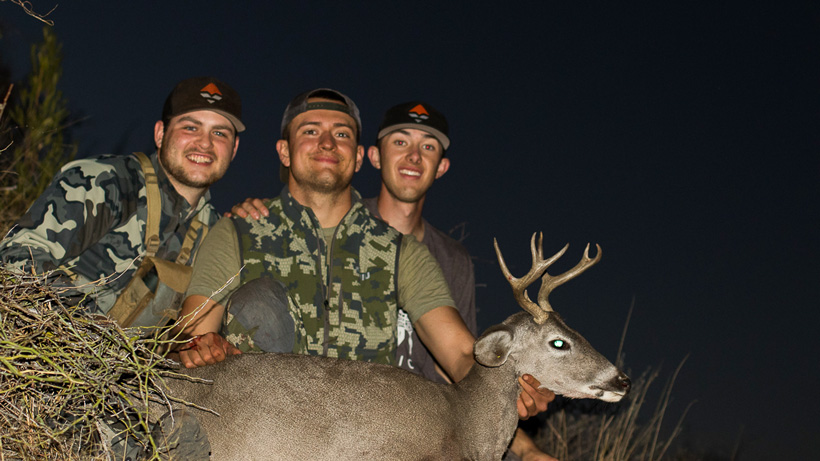 Both Thomas and I have had many successful hunts together over the years, but this one meant so much more to the both of us. 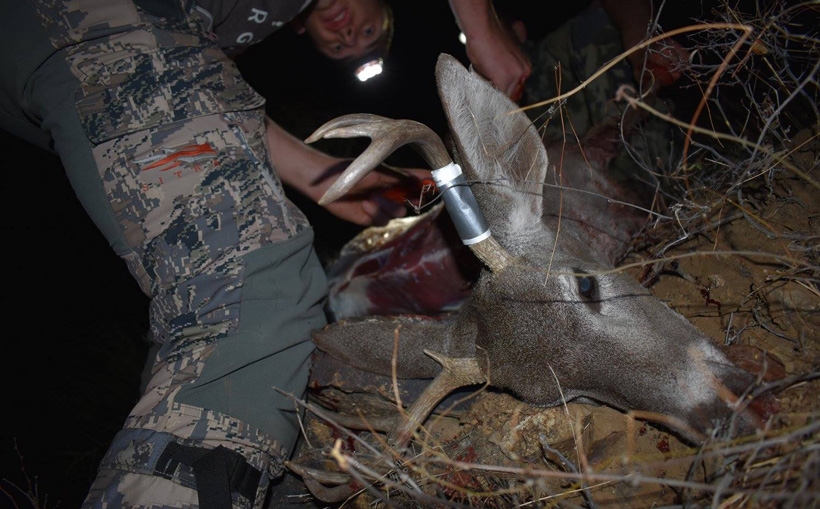 We were able to harvest not one but two of, undoubtedly, one of the hardest animals to hunt and, with only seven months of planning, it was incredibly surreal. 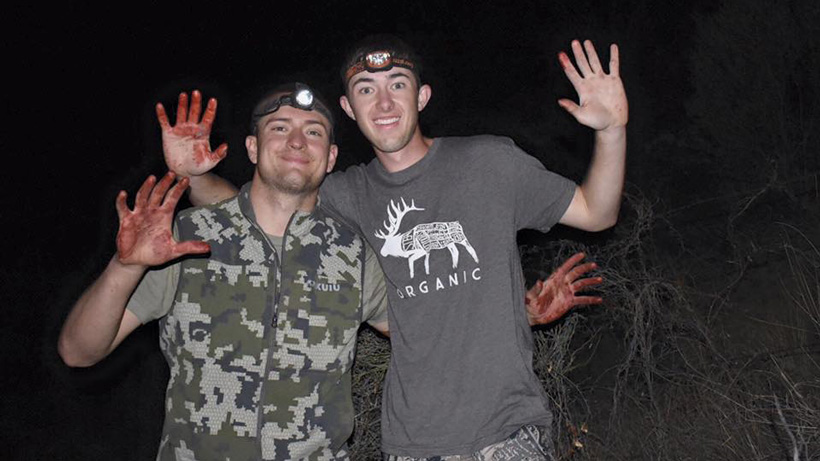 As we packed the buck off the mountain that night and arrived back to camp, we couldn’t help but laugh in how smoothly everything went. I mean, what could have possibly gone wrong with three college kids, heading out of state for the first time together on winter break, and hunting Coues deer down on the border of Mexico? This season was one for the books: the memories made, the laughs, and all the challenges made it bittersweet for two lifelong buddies going two for two on the elusive grey ghost otherwise known as Coues deer. 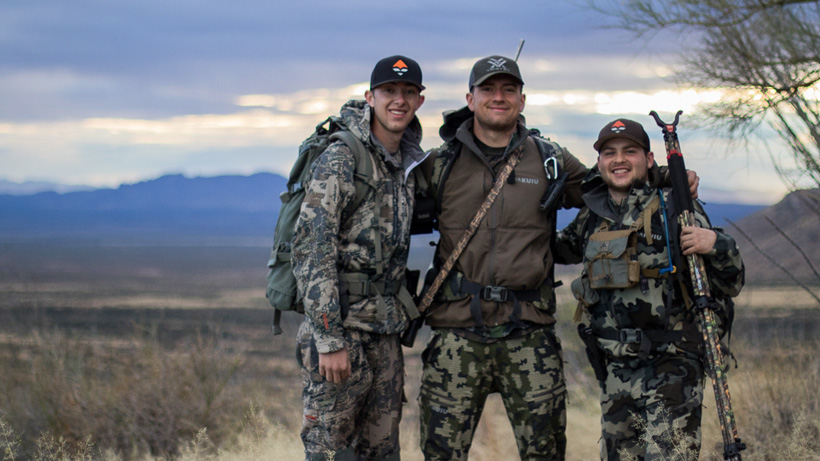