Coues deer: From dreams to reality 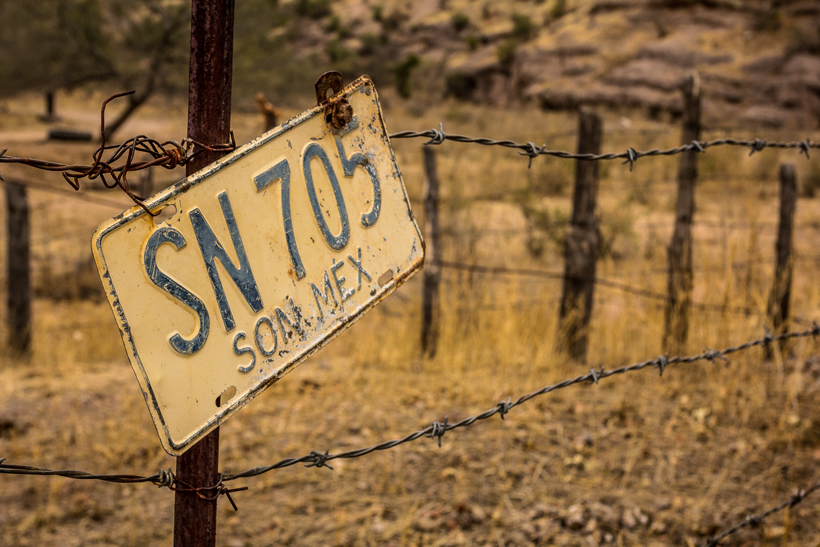 It was midnight on Nov. 3, 2013. I had just won an all-expense paid hunt for Coues deer in Sonora, Mexico thanks to a photo contest held by KUIU. A photo I submitted to KUIU was selected as one of 12 final photos for the contest, and after a tough voting battle, my photo came out as the winner. 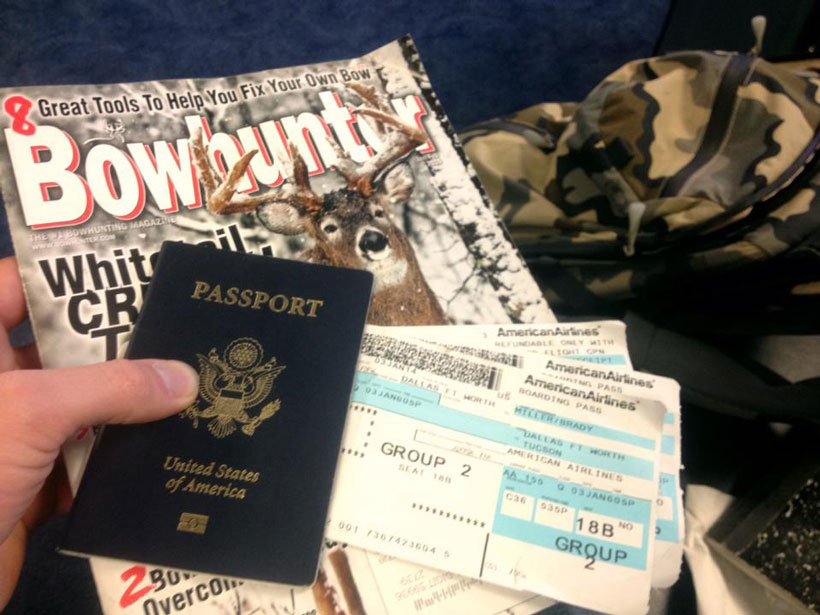 January finally arrived and I was on a plane headed to Tucson, Ariz. to meet up with Jay Scott and Darr Colburn of Colburn & Scott Outfitters and Dave Loescher, Jason Hairston, Brandon Burns and Hunter Haynes to prepare for the hunt. 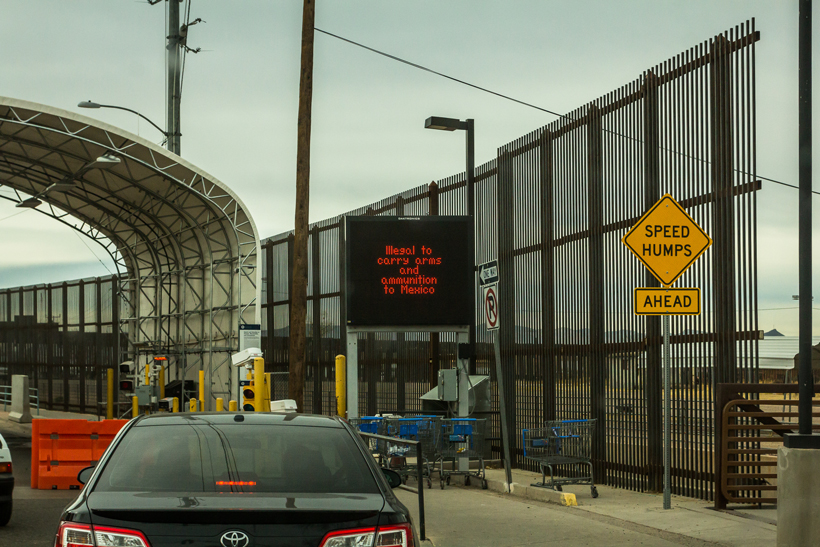 After a short sleep we headed to the Mexico border, but had to deal with a lot of paperwork at the border before we were finally on our way south, toward the ranch where we would be hunting. 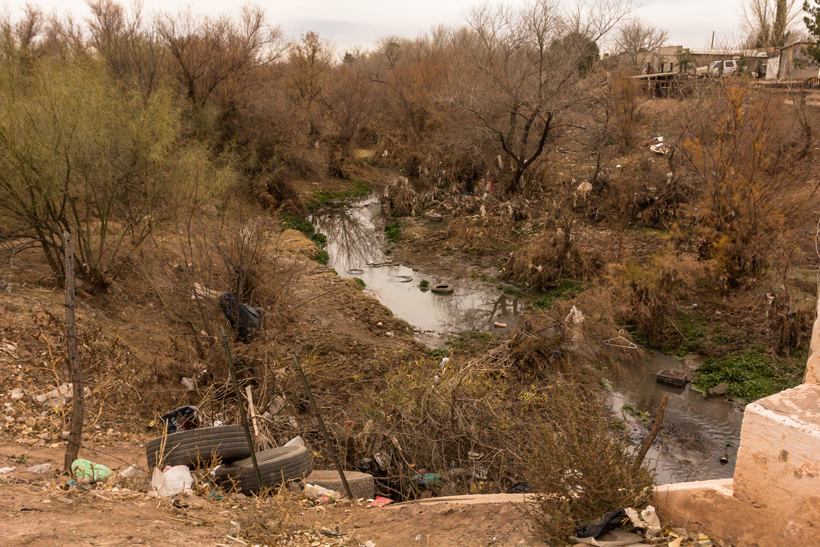 After arriving at the border, and seeing what the living conditions were like in the small town of Agua Prieta, I realized how blessed we are to live in the United States. 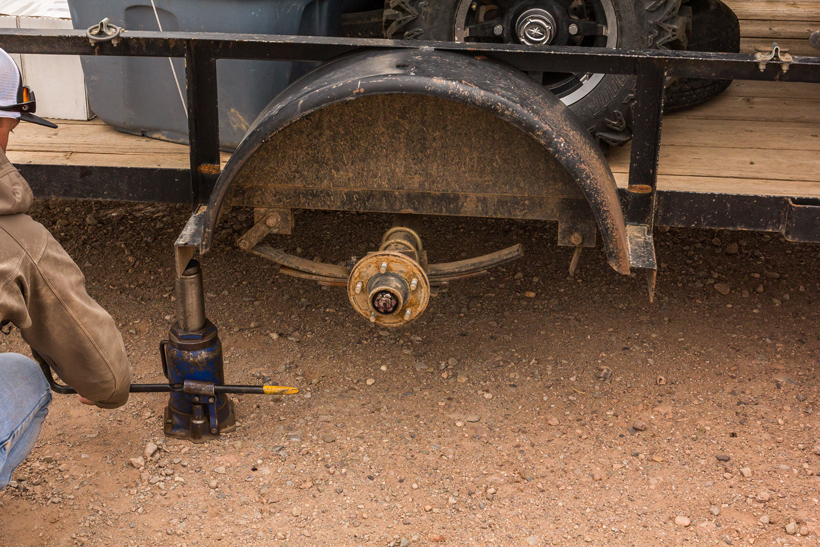 Our journey came to an abrupt halt a few miles south of the border when we blew a leaf spring on the trailer. To make matters more interesting, we broke down right next to a jail — but what’s a hunting trip without a few difficulties? Fortunately, after a few hours we were back on the road and headed toward the ranch. 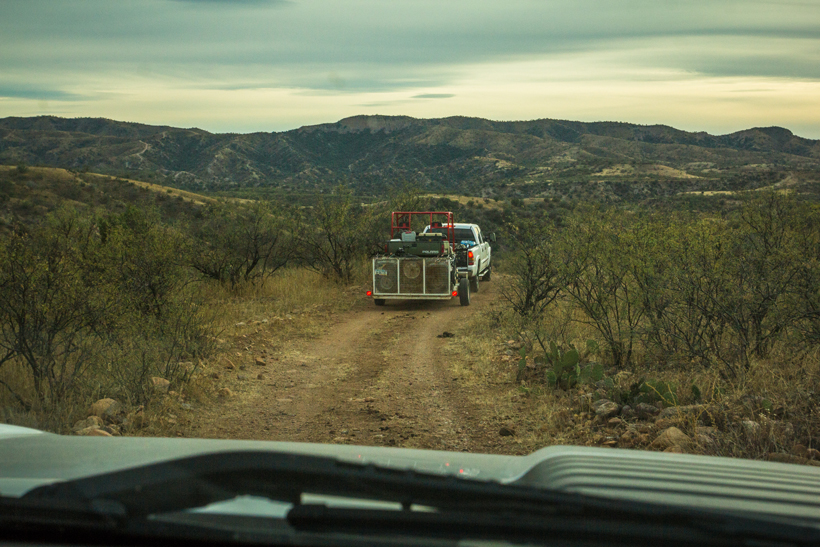 We would be hunting a large working cattle ranch with elevations ranging from 4,500 to 6,500 feet. The views were breathtaking! I spent the evening soaking up the scenery and getting my gear in order. 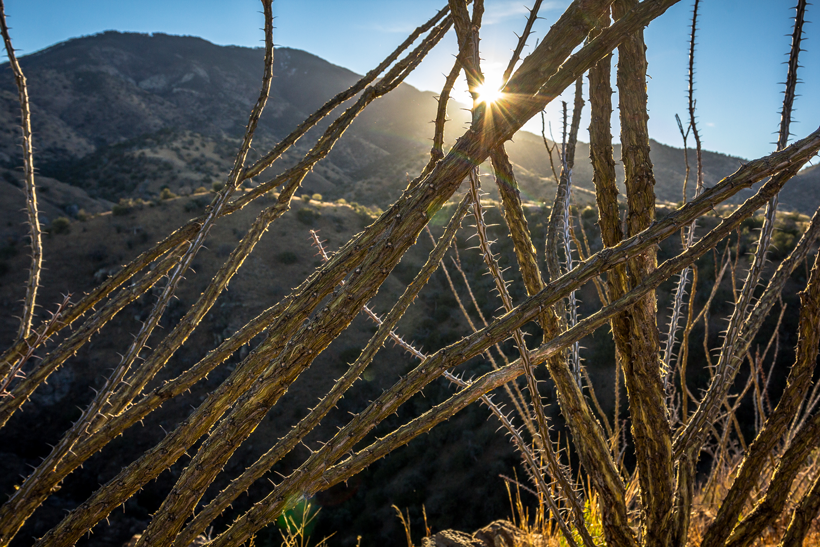 In the early morning darkness, we navigated our way along small two track roads that snaked their way up the mountains. On the skyline to the east, yellow and orange rays of light sliced their way upwards, creating a spectacular display. To the west were seemingly endless steep canyons, each one filled with thick mesquite trees and ridgelines covered with thorny ocotillos. The terrain was truly desolate. 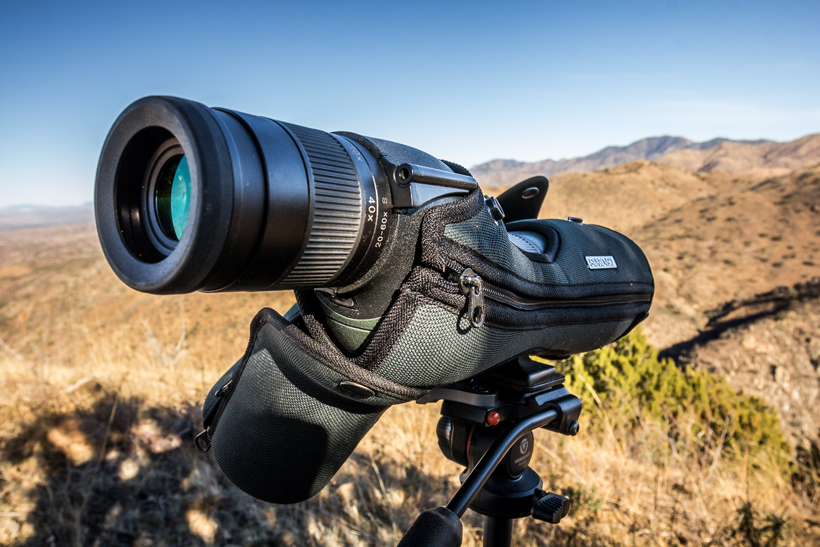 The majority of the first day was spent picking apart the dry terrain with high-powered optics. It took me awhile to adjust my eyes to focus on these small deer in the parched terrain.

Three hours into the hunt my trip hit rock bottom! As Hunter and I were traversing across a rock pile, I fell directly onto my bow limb, creating a large crack in the center of the limb. Needing to test my bow, but not wanting to risk eye damage, I borrowed a pair of sunglasses and started to draw the bow back. Half way through the draw cycle the limb delaminated from the front to the back. My heart sank! I knew this was a bad situation — I had a herd of javelina out in front of me so I attempted a stalk on them to test out my bow. As I approached the herd, I came to full draw on the closest boar and sent an arrow off that missed by four inches. 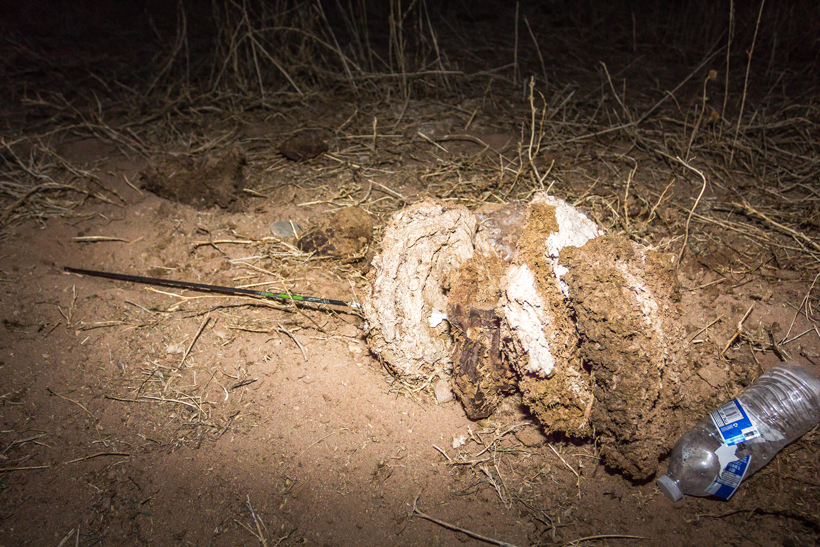 Knowing that now I would need to do some re-tuning, I made the long drive on an ATV back to the ranch, where I found some hay bales and set three in a row and took a shot from 35 yards. My arrow blew through all the bales and smacked into a large metal sign behind the barn. At least I knew my limb could withstand the stress of shooting. Finally it dawned on me and I grabbed four dried up cow patties and stacked them end to end. I shot from 20 yards and to my surprise, the cow patties stopped my arrow. I moved my sight elevation, and shot again at 20 and then 70. I was back in business! It had been a rough start to the week, but as the sun set, I knew the dawn would bring a new day of hunting. 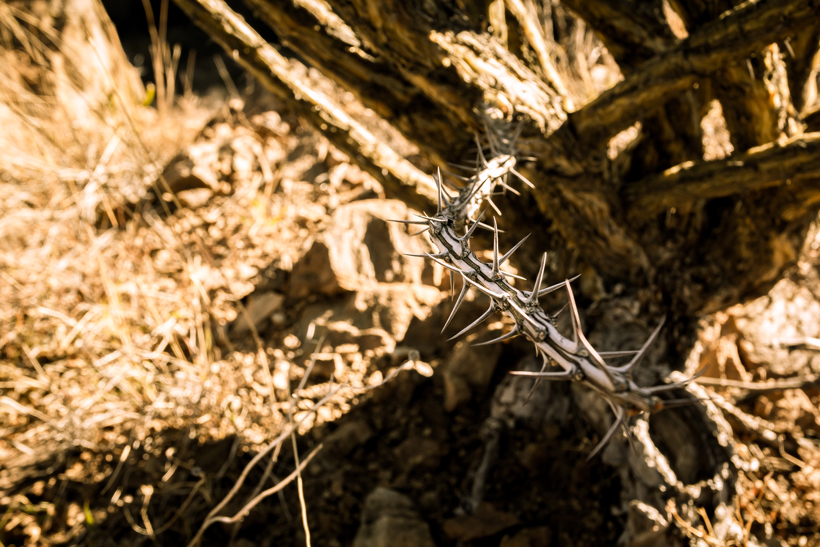 The following morning came and went without locating a deer. We changed locations and Hunter and I had eight deer below us with only one decent buck. The rock band we were on provided a great view of the canyon below, but caused us to be up too high above them. I decided not to risk a shot at that distance. 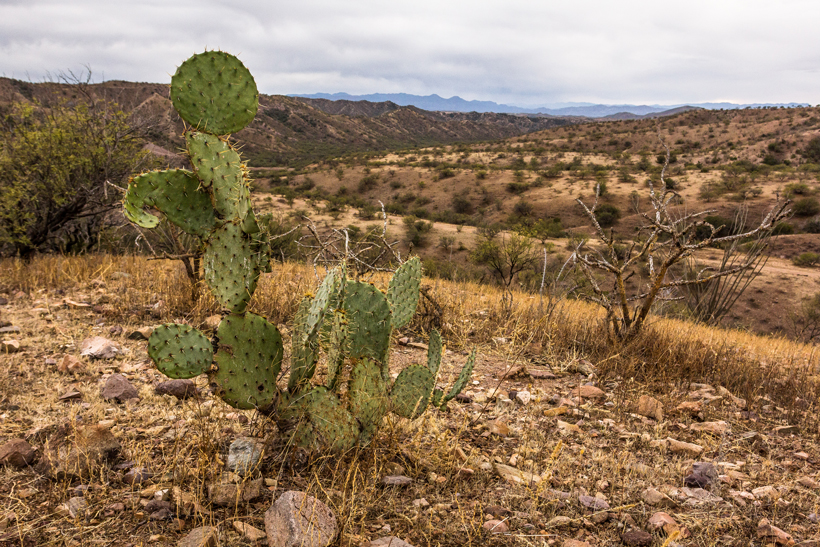 A few hours later, I found myself climbing out of a dry creek bed when I spotted three different bucks less than a mile away. I figured the largest buck would go right at 100”, so I spent the next two hours trying to get into position. As I neared the top of the ridge where the buck was bedded, a doe had gotten out of her bed and busted me at 30 yards. She bolted and took the buck with her. 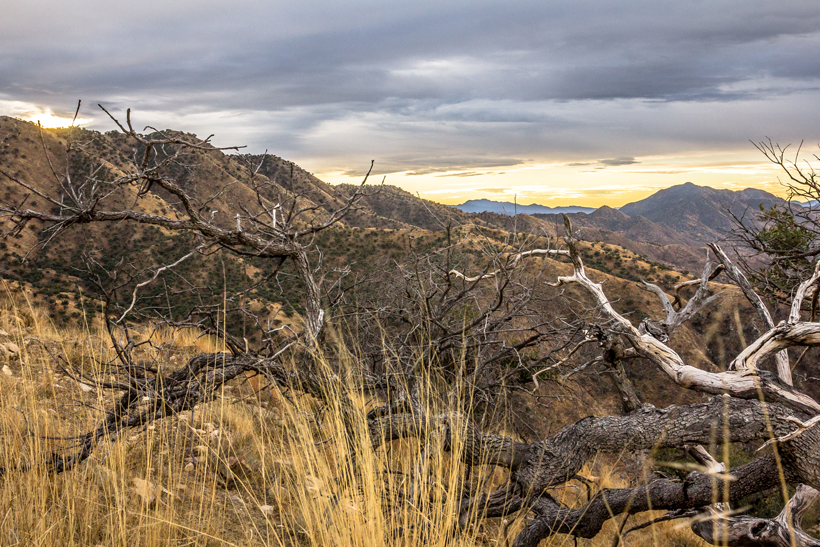 We were treated to another beautiful sunrise on day three. That morning we went deeper to the back of the ranch and worked our way into the higher elevations, hoping to catch some bucks that might still be holding out in the thick trees. 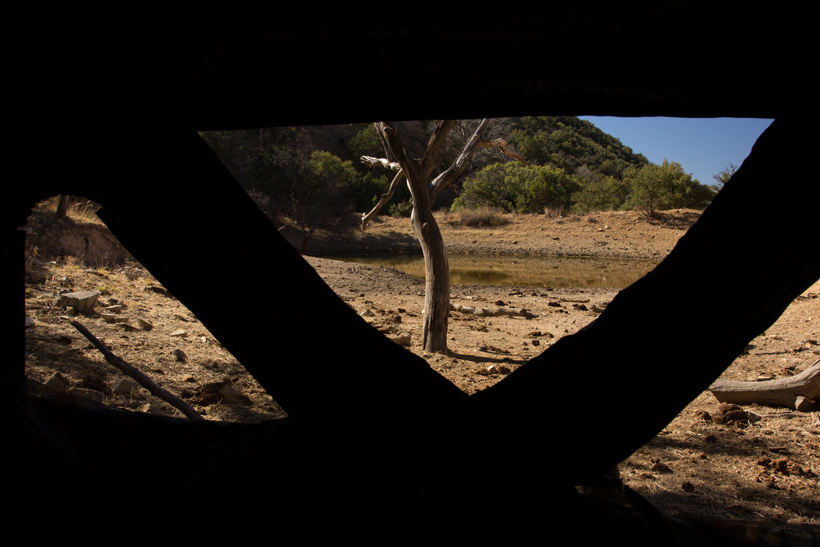 At 10:15 a.m. we regrouped and decided that I should sit in a blind near water that afternoon. It was 11:30 a.m. by the time we got to the waterhole and set up the blind. Darr wished me luck and headed back up the mountain to help glass for the other guys. The blind was tucked in next to a tree to provide concealment, as well as some needed relief from the scorching Mexico sun. I had just finished my first bottle of water when I glanced up on the mountain and noticed a respectable 3x3 working his way toward the water. The buck gave me plenty of time to get excited as I watched him slowly feed.

Fifteen minutes went by and the buck decided the waterhole was not for him and he fed his way back up the mountain. I always get worked up when I watch an animal for a long period of time. I guess that is why bowhunting is so exciting! An hour later, I caught movement out to the left of the blind. My eyes instantly locked onto the enormously large G2’s of a very old buck.

The buck went straight to the pond without any hesitation. The extremely high temperatures for this time of year were benefiting me in a huge way. I grabbed my rangefinder and carefully moved my slider sight to 33 yards. 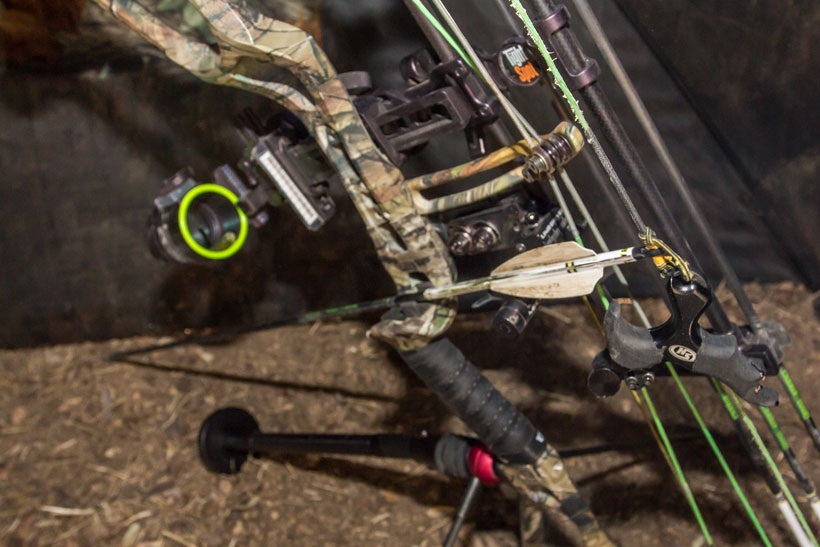 My thumb-activated release was already clipped to my d-loop. I drew back. Once the string came to its final resting place against the draw stops, I anchored the release against my jawbone and settled the pin behind the shoulder of the deer, preparing for a slight quartering away shot. 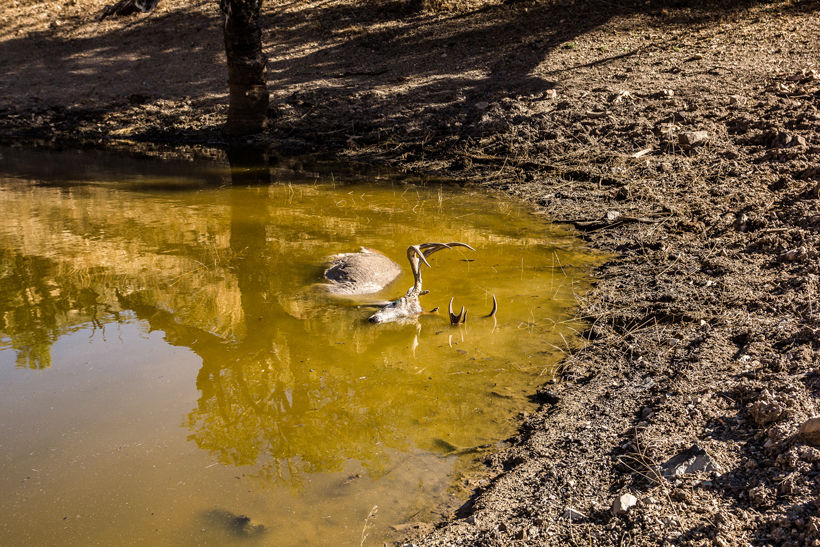 The arrow hit its mark perfectly, punching through both sides and sticking into the mud at the bottom of the pond upon its exit. The buck took two leaps through the water and to my astonishment he fell over on the top of the dike. I grabbed my binoculars and noticed it was a perfect shot so I set my bow down and snapped a few photos with my camera. A few minutes went by and the buck tried to get up onto his feet. As soon as he stood his legs got weak and he fell over and tumbled down the dike and into the pond. 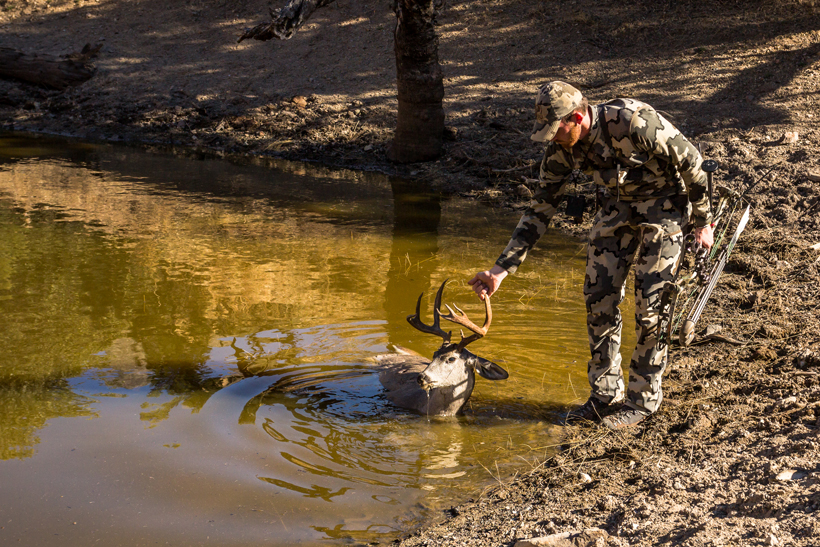 It was over — I could not believe how fast it all transpired. I began to shake uncontrollably as I finally took the time to check out the buck’s rack. 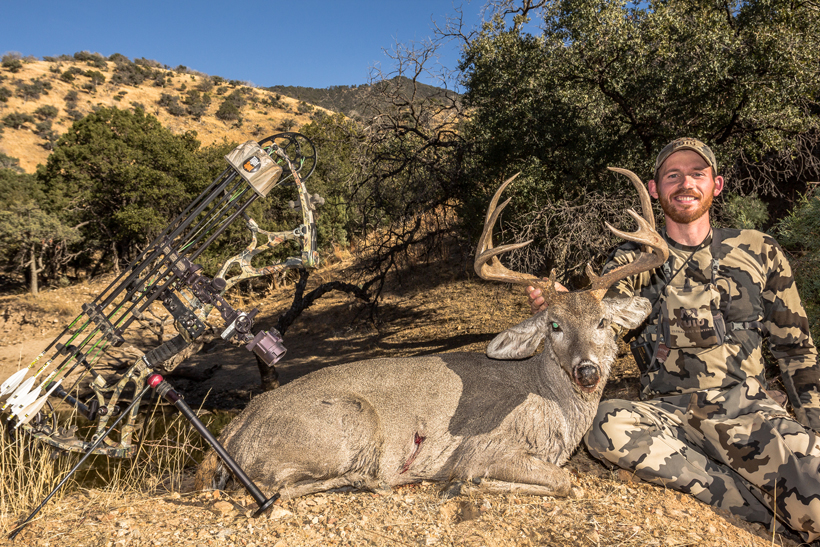 Walking up to the buck I could not help but think about how challenging this hunt was, and what I went through a few days ago when I almost destroyed my bow limb. 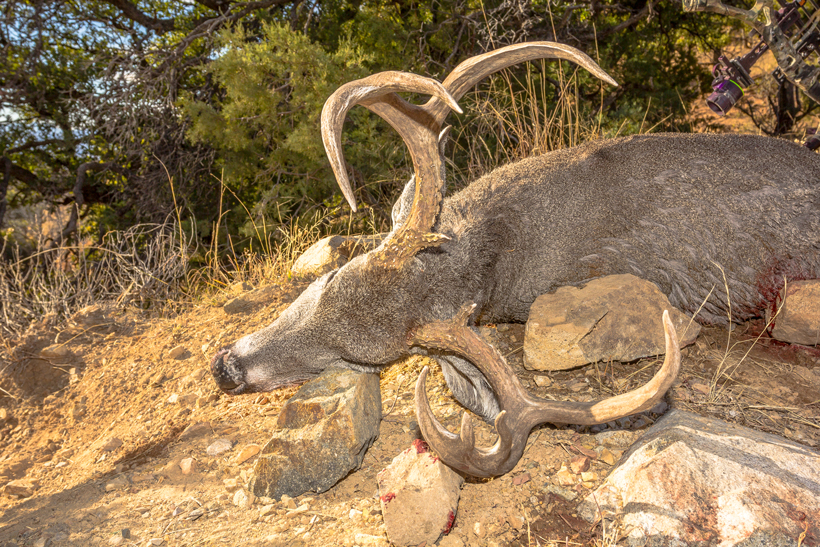 There in front of was a truly giant Coues deer buck. I shot the buck at 1:30 p.m. and spent the rest of the afternoon taking photos and getting my buck back to the ranch house. 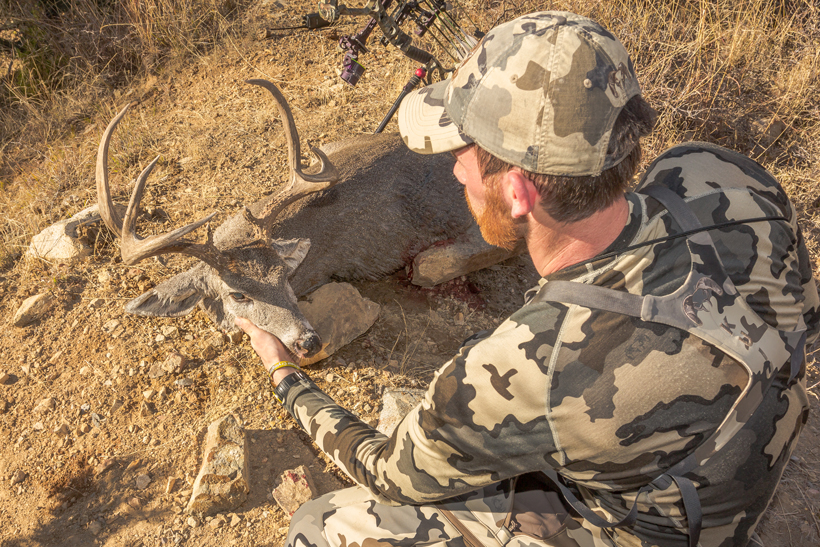 Because I was using a bow, I had hoped to take an average Coues deer buck, but I ended up taking a deer that ranked very high in the all-time record books. After the 60-day drying period, the buck gross scored 118 2/8” and officially netted 110 1/8”, which placed him at number 17 in the world in the Pope & Young record book. 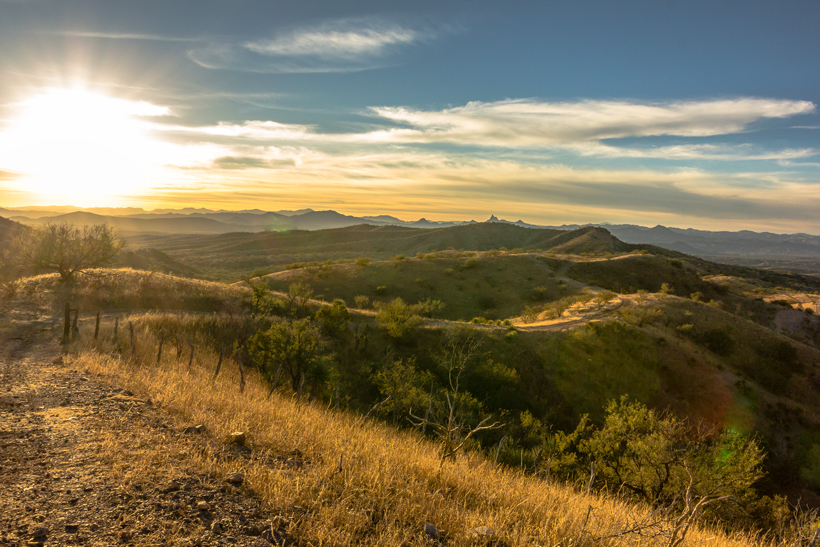 The scenery of the mountains of Mexico faded away as we made our way back to the United States. I love and cherish the challenge of hunting in wild places. I came away from this hunt with great respect for this small species of deer. The country they live and thrive in is something to behold, and each aspect of this hunt was truly breathtaking. I headed back home with a buck of a lifetime plus some friendships and amazing memories that will last forever!