Bowhunting for bison in the Sonoran desert 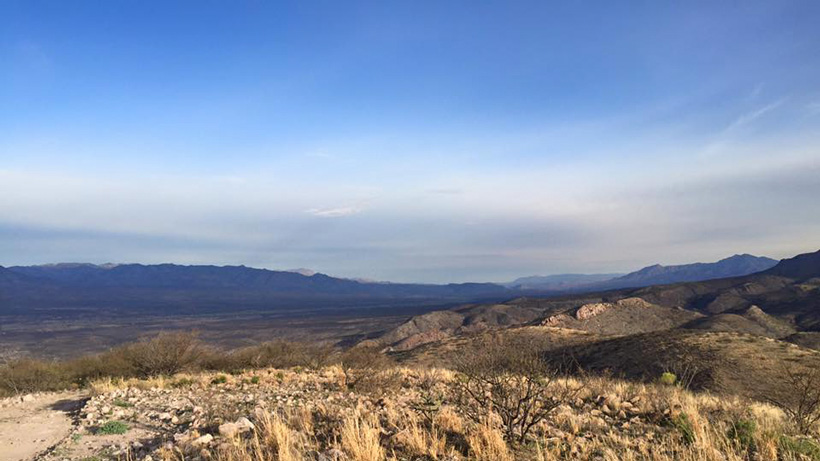 The journey of my bison hunt started in Mexico in the spring of 2015 with a great friend (and hunting and guiding partner), Jay Scott of Colburn and Scott Outfitters. 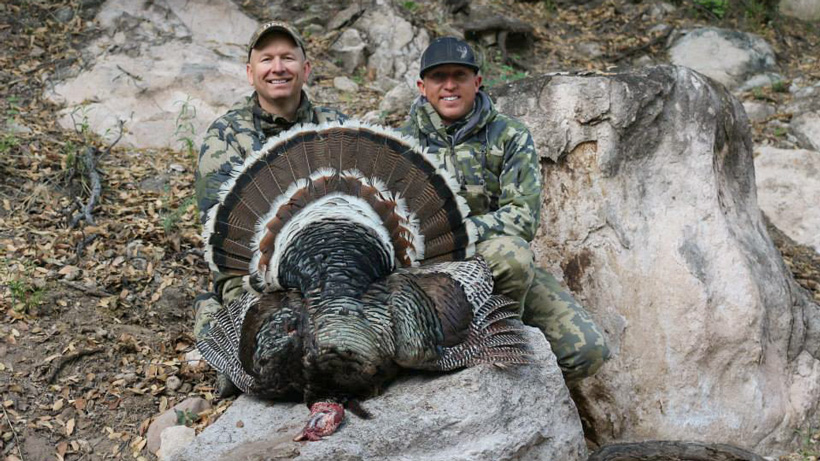 We were in Sonora, guiding some Gould’s turkey hunters and driving back to the border town of Agua Prieta to cross with some very happy and successful hunters. I sparked up a conversation with Jay about himself and Steve Rinella's bison adventure from 2012. A hunt like this would fulfill a dream of mine, not to mention pursuing an animal that has played a huge role in American history, Jay said it was nothing short of an awesome hunt. Wanting nothing to do with a high fence hunt, Jay said, “This is the place to do it. These bison live on a mountain and in rough country,” adding, “they are as wild as they get Haynes!”

From that moment on I was sold. Jay put me in touch with ranch owner Jose Morales of Rancho La Mesa. I gave Jose a call and I was set to fulfill my dream hunt in December 2015 with a bow. Being an avid archery hunter, it was the only way I wanted to do it, but I was bringing a rifle for backup just in case.

Preparing for my hunt and anxious to go, I gave a few of my buddies a call to join me on my journey. Good friend and hunting buddy Noah Flores said, “Let's go and I'll video.” We left our home town of Payson, Arizona at 2 a.m. on December 15, 2015 and headed to Douglas, AZ to meet a ranch hand by the name of Francisco. By 8 a.m., we were on the Mexico side of the border. Francisco was right on time and had all of our gun permits and everything in order. We checked our guns with no problem at the border. From there, we followed Francisco to the military base to once again check my gun paperwork with no problems. 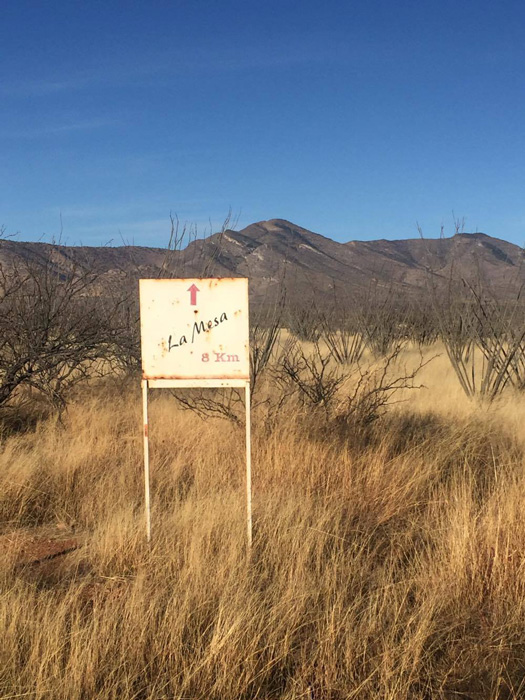 Then, we were finally off to Rancho La Mesa to hunt bison. After a short hour and fifteen minute drive we arrived, unloaded our belongings and settled into the ranch. 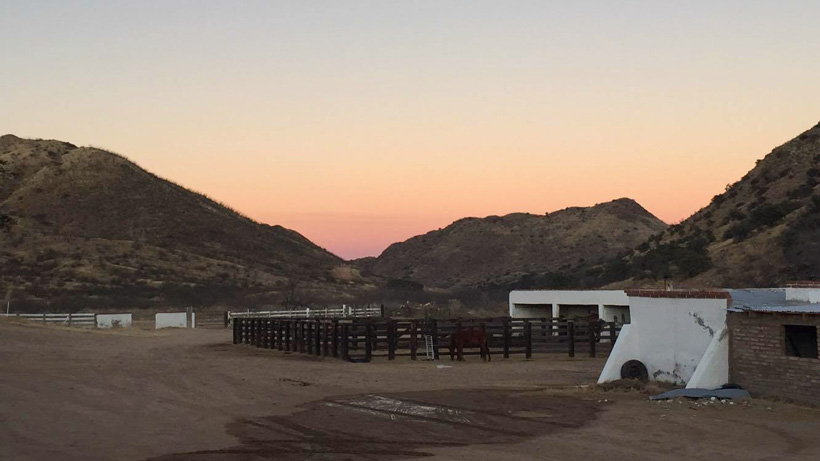 Chata, the ranch caretaker, prepared us a bite to eat. It is always nice seeing all of the friendly faces, knowing them from previous Gould’s turkey hunts with Jay. Francisco and Rafael would be accompanying us on my hunt and were eager to get the optics out and start pounding the hills for some bison. 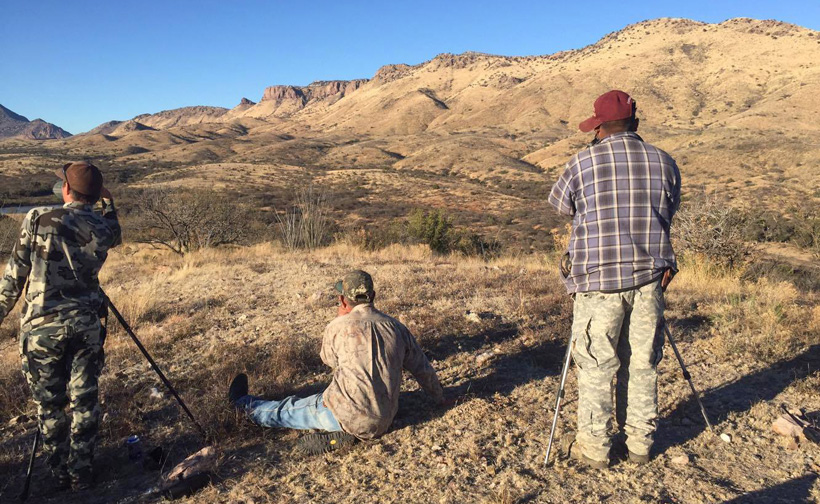 We set up on a high point and, a short time later, found a big group of bison — all of them were cows and young bulls. The gloomy winter sky began to fall into darkness and we headed back to the ranch. We were greeted by Chata and her authentic Mexican food after a long day of traveling and scouting. That delicious food was a welcome sight. We settled in for the evening to await our next day of adventure.

Waking up to a chilly frosty morning, we fired up the Ranger and truck and headed out. The sun started to rise and the bison slowly started to move. We picked up the same group from the previous evening, spotting a nicer bull in a small depression on the mountain. The bull was all by himself. We got the spotting scope out and Rafael began to study the bull. He has been on multiple bison hunts on this ranch and knows what a big bison is. Rafael reassured me we were going to try to find the biggest bull and, unfortunately, this bull was not big enough. 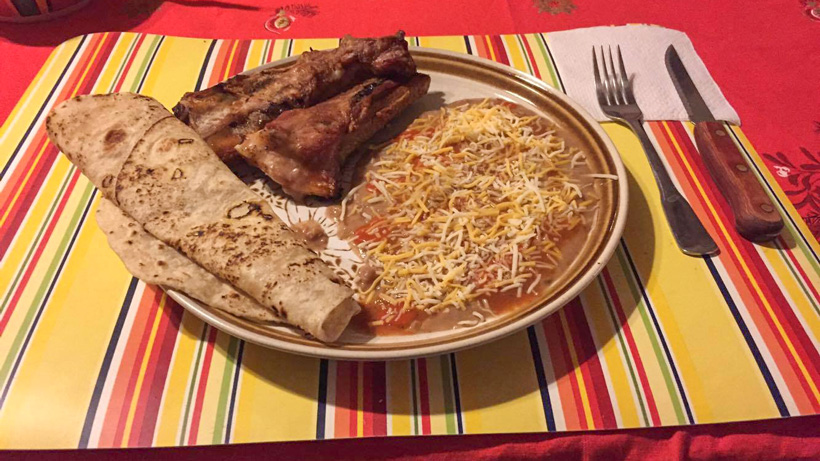 Another night sky fell on Rancho La Mesa and we headed back to the ranch and enjoyed another great meal. Our stomachs were full as we sat around the fireplace in a beautiful ranch house and reminisced with our new friend about our day, listening to his great stories of Old Mexico. We turned in for the night to wait and see what the next day had to offer. 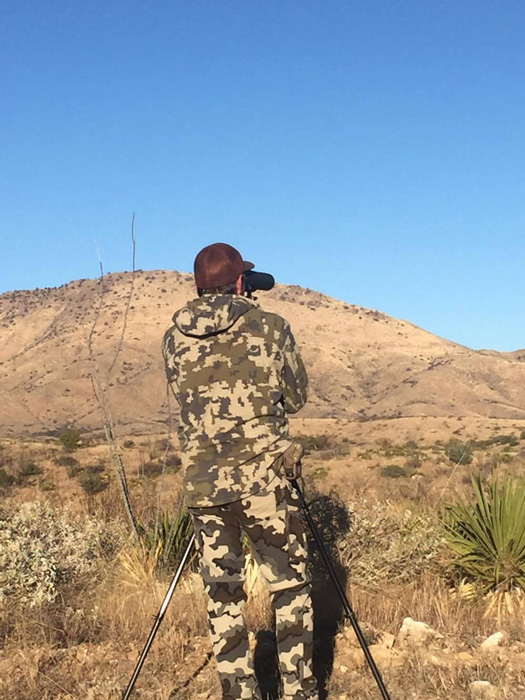 In the morning, we headed to a new glassing area and immediately picked up on a big gorgeous bull feeding on a grassy knoll with his horns glaring into the morning Sonoran sun. I grabbed my bow and began making a stalk, trying to get the wind right on what was a breezy morning.

Gaining about a hundred yards the old warrior started to get wary, knowing something was wrong. I dropped and crawled about another 80 yards and couldn’t move any further without being seen. Because it was such a large animal I wanted to get to 60 yards or closer to make sure that I didn’t wound the big bull. Inching my way, I tried to get closer, but the bull bolted off into the canyon below and was gone. We tried to relocate him during the rest of the day with no luck. 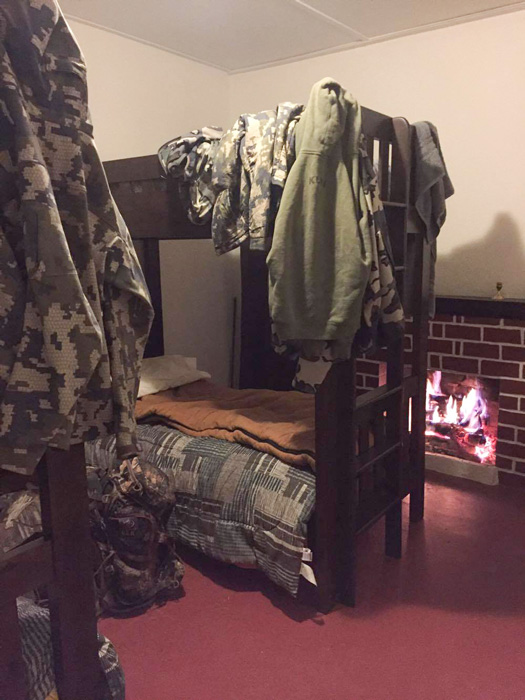 We enjoyed another chilly night by the fireplace and we again turned into our bedrolls anxious to get one these majestic bison on the ground.

The next morning we sat and drank coffee while letting our Ranger warm up from the frozen night. We all had a good feeling about this new day. It was a slow morning, but around noon Noah said, “Hey! You need to look at this bull.” The bull looked to be a big one but was so far away we couldn’t be sure. We ended up closing the distance on him and could now tell he was a big bull. We made our stalk and got right on top of him at about 30 yards.

They kept calling him “Viejo” because he was an old warrior with a big set of horns. Looking him over he was gorgeous and majestic, but because he was old, he was skinny and his cape wasn't in good shape. I decided to pass on the old bull. I had traveled to Mexico for more than horns; I wanted a bull with a beautiful cape I could mount and a bull I could feed my family with.

We quickly headed back to another high vantage point and got the optics out. It was now mid afternoon. We hoped to find another big bull with time to make a stalk. I heard Rafael get excited on the other side of the knob, Noah and I quickly scurried over to where he is with our optics and, there, in the distance, was a big bull. Being hot outside, the bulls can be found bedded under big mesquite trees to escape the hot sun. He was in position and the stalk was on. 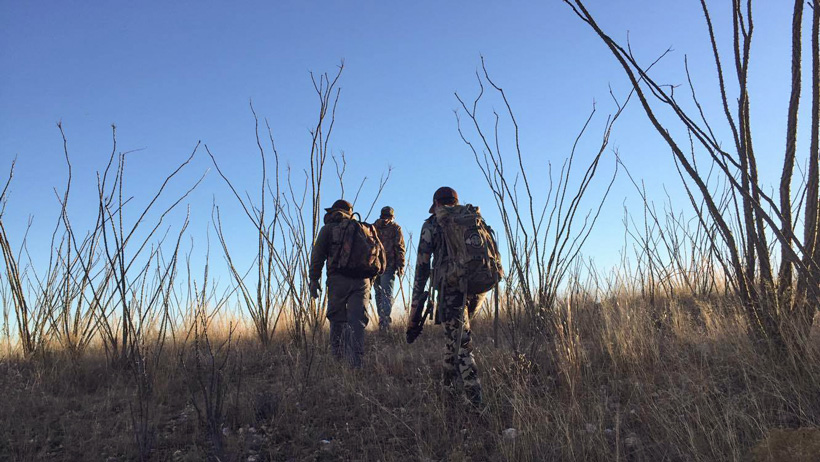 After a mile walk we were getting closer. We crept up to the nearby saddle and, unfortunately, the vegetation was thicker than we thought. We had trouble locating him as we crept up a little closer. Scanning with our 10x42 Swarovskis, we picked up his horns glowing through the tall grass. We told Rafael to hold back, Noah and I stripped our boots off and began to crawl toward the big bull. After 20 minutes, we were 30 yards from him with no shot; he was laying down. It was now a waiting game. After an uncomfortable hour the bull was up and my heart started pounding. I slowly pulled my Hoyt Element back and let my arrow fly. The arrow stuck into the bull a little high, catching the edge of his shoulder. He took off in a hurry. I looked behind me to Noah and said, “Man, that happened so quickly!”

The bull was now slowly using the saddles on the ridgeline to get down to lower country. Looking through our binos, we could see that he was hurt badly. The bull made it into the thick lower country where we had to track and blood trail him. Losing blood, I began to feel sick for not making a better shot. Yet, as we continued to trail him, I heard Noah yell that the wounded bull was headed down the drainage towards him. 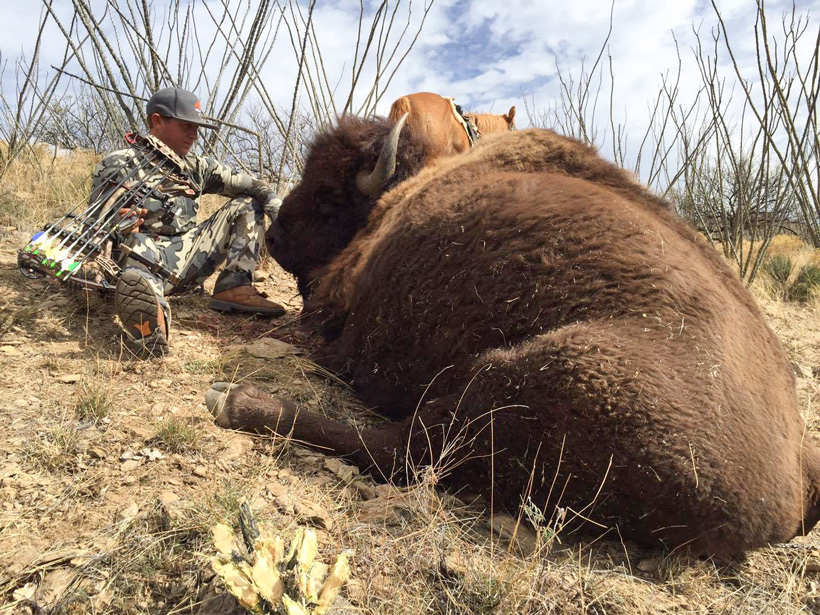 I ran over and got another arrow in him; the bull expired and I had just fulfilled a lifetime dream. 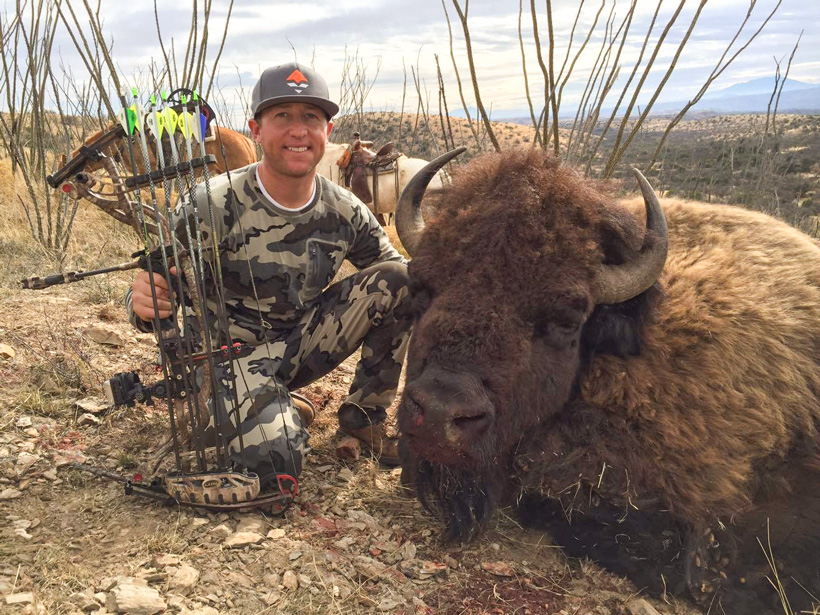 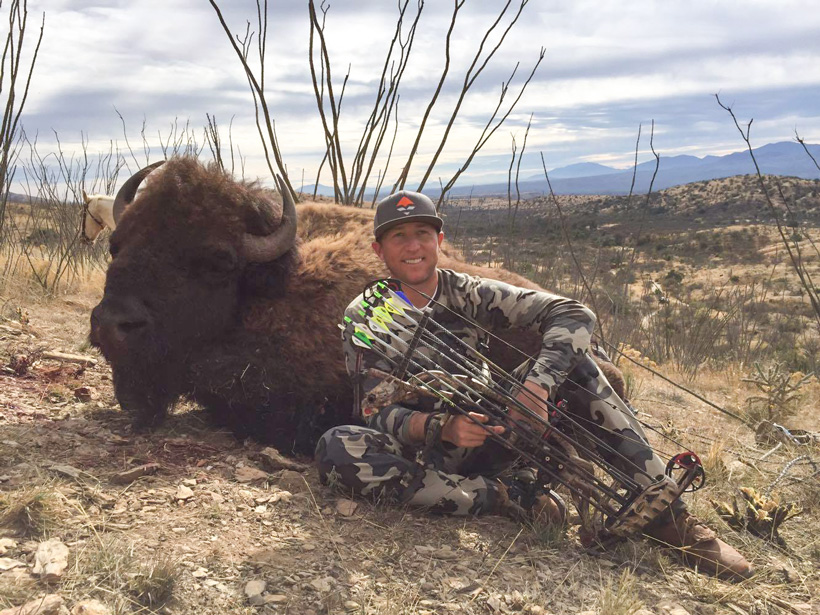 Sitting next to the bull I had just harvested left me speechless. Words cannot express how happy and thankful I was. 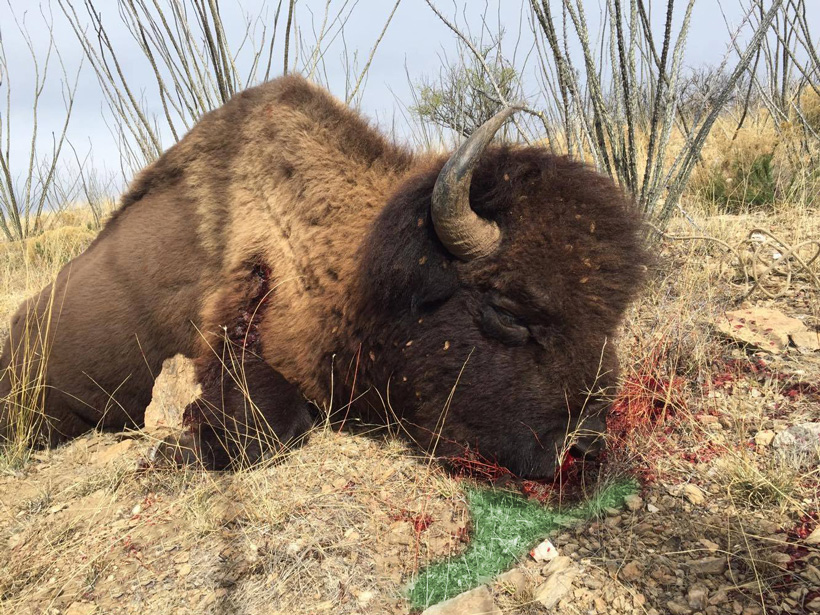 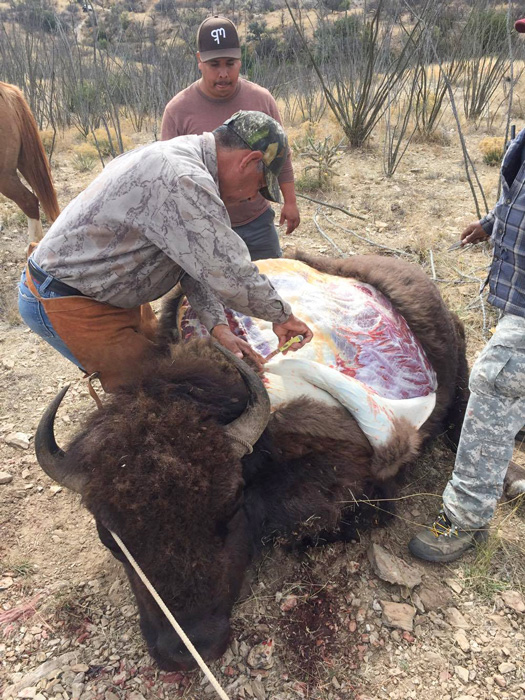 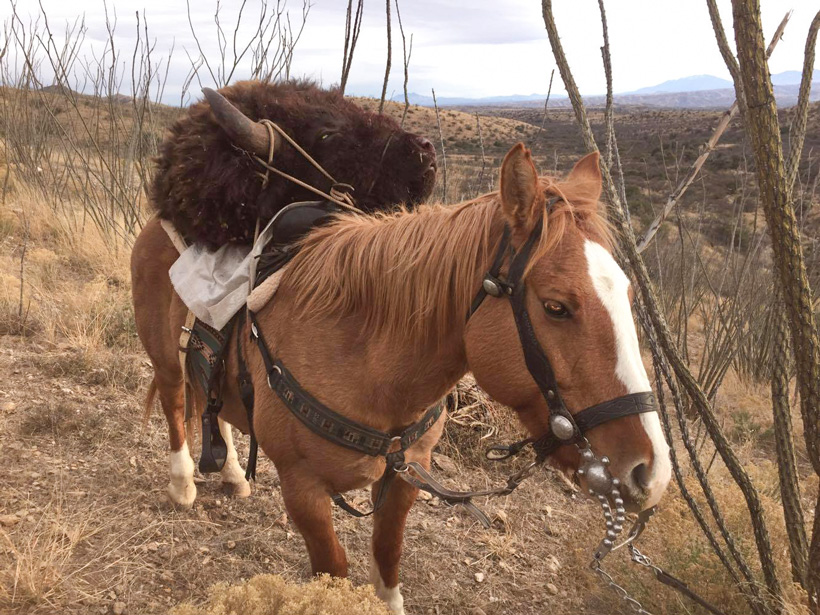 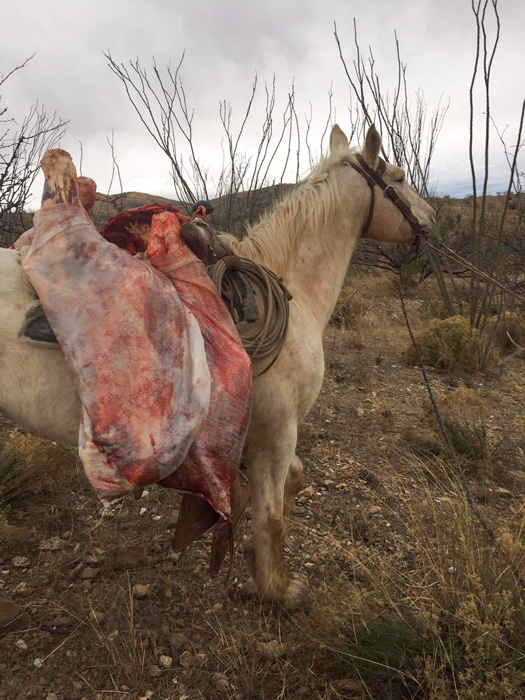 After an hour of photos, we quartered the bull up, put the meat and hide on the horses that the cowboys brought out to us and headed back to the ranch. 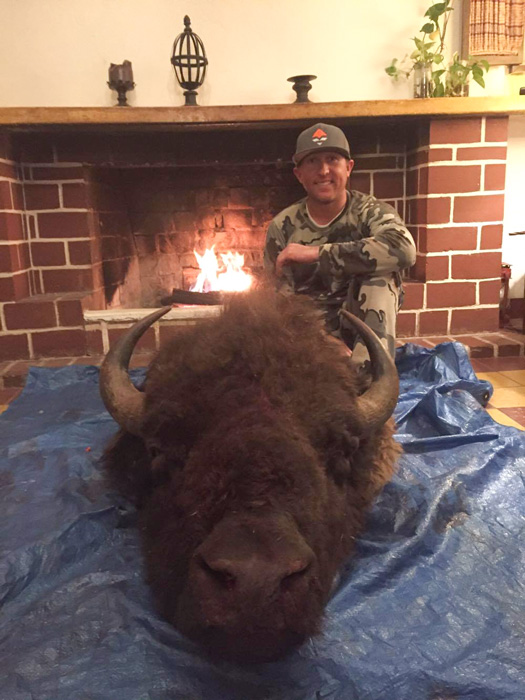 After a night of celebration with our old and new friends, it was now time to head back to Arizona the following morning. We woke up, had some coffee, and began packing for the long haul back home. We exchanged our thanks and appreciation to everyone at the ranch and were off. Francisco followed us back to the border town of Agua Prieta where we checked out my rifle and proceeded to the U.S. Port of Entry. Pulling into customs, they checked the cape, mainly the ears for tics with no problems, and we were on our way home. The experience of this hunt was everything and nothing short of what I had dreamed of: a true wild hunt. Thank you to everyone who was involved that made this dream hunt come together for me in the mountains of Sonora, Mexico. There was nothing like chasing these animals on a mountain with such steep terrain.

You can watch a short video of the hunt below.