Bearing down on Utah's ultimate predator 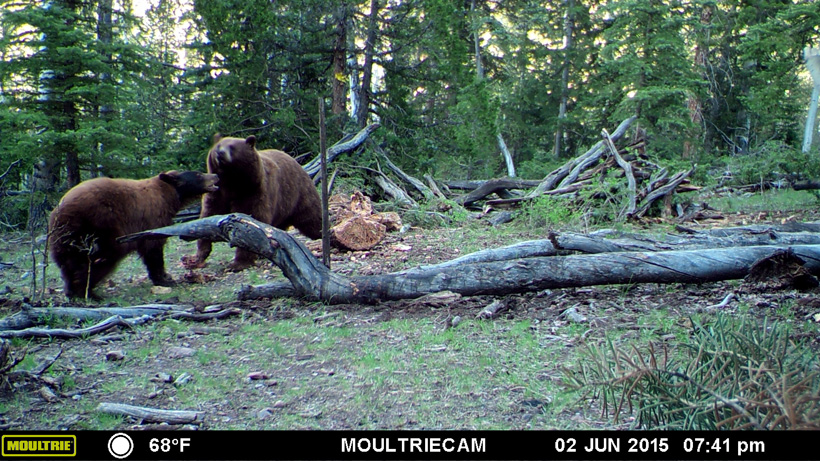 In November 2010, I accepted a new job in southern Utah. During my first day, they led me back into a tiny office and introduced me to my new officemate, Todd Nebeker. Todd and I hit it off pretty quickly and within the first few minutes we were comparing notes on our bow setups and comparing equipment and hunting strategies for the upcoming year. For the past five years, Todd and I have shared an office and often shoot, scout and work together. This year, during January and February, Utah’s upcoming black bear application seemed to dominate most of our conversations. After we had mulled over several possibilities, Todd decided to apply his bonus points to a unit he thought he could draw and be successful even though the unit did not have a history of producing black bears.

Fast forward a few months later where Todd and I were sitting at a local restaurant waiting for lunch. He decided to check his online bank statement and a huge smile swept across his face when he saw the $85 dollar charge from the Utah Black Bear Draw. His success spurred me to fish my own phone out of my pocket and, as luck would have it, I also drew a bear permit, although mine is for a different unit and season. Hopefully, I will be able to share my own hunt with you all later this fall. Luckily, Todd allowed me the opportunity to tag along during his hunt and to share his story.

Bear hunting in Utah is broken into two seasons: spring and fall. It is then further divided by hunt type: pursuit with dogs, bait, and spot and stalk. Todd had drawn a spring bait hunting permit that would allow him to bait and hunt from the end of May through early July. Bear baiting in my opinion is something every hunter should try at least once. While it is definitely a ton of work, time and expense, there is something about it that is very gratifying. Simply put, baiting is just plain fun. By nature, black bears are such a solitary subtle creature, you rarely see them — especially throughout most of southern Utah. The feeling of walking into your bait site and seeing a bear track firmly imprinted in the mud or having a bear creep in beneath you while you are perched in a treestand 12 yards above is exhilarating.

Todd and I spent a lot of time talking about selecting sites and locations to bait. Eventually Todd whittled it down to two specific areas. In Utah, a black bear bait permit will allow you to register and obtain a Certificate of Registration (COR) to bait at only two sites at one time. Prior to baiting, you are required to submit a GPS location for each site and obtain a signed letter from the land management agency approving your sites. After you are approved by both the land management agency and the Division of Wildlife you can obtain a COR. That is when the fun really starts.

Securing bait is always challenging. Fortunately, early on Todd made a great contact at a local restaurant manager that agreed to save his certified meat scraps for him. He also began to stockpile cheap dog food and sweet supplies, like donuts. You are allowed to bait for two weeks leading up to the start of the hunting season. 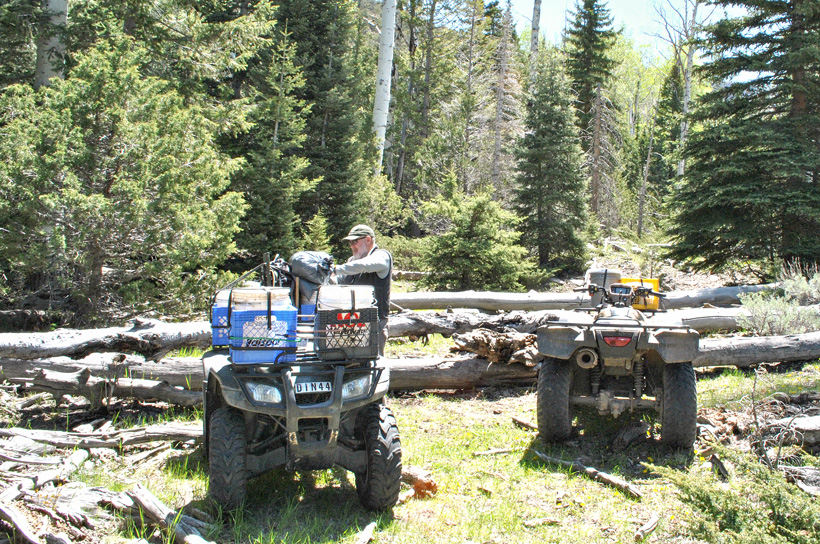 On May 23, two weeks before opening day, Todd began the process of hauling and establishing bait sites. There is quite a bit more to picking and setting up a bait site than you might think. 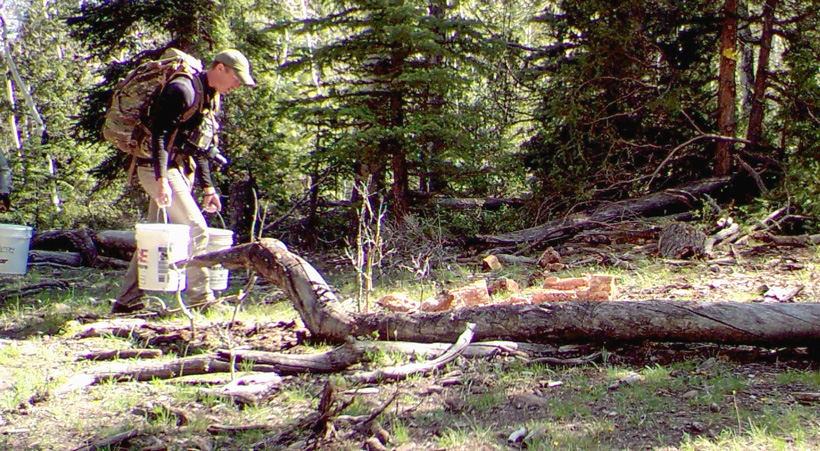 Several things have to be considered before you just pile a bunch of donuts and meat scraps on the ground. With the help of another friend of ours, we hung trees stands, cut shooting lanes and set trail cameras to capture the action. 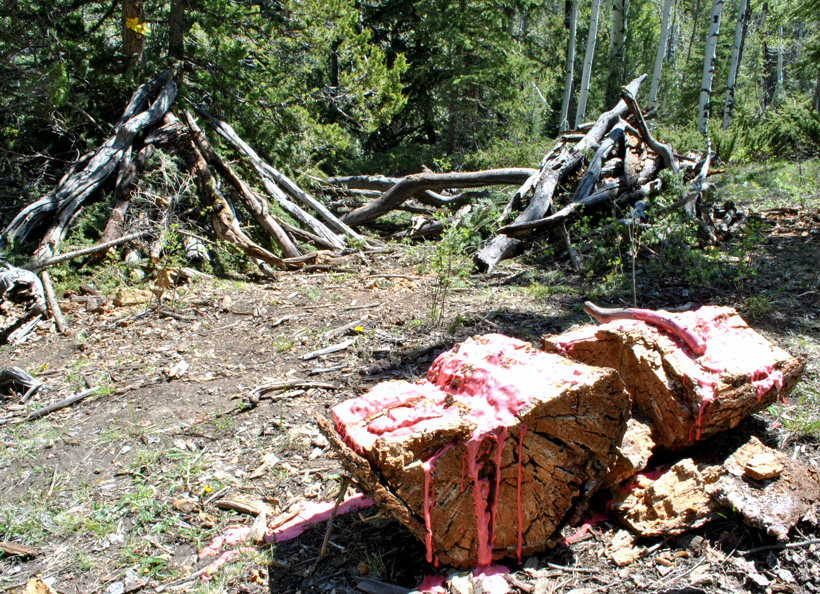 The bait itself was piled near the base of a large pine tree with a makeshift fence constructed from deadfall extending out at an angle in two directions. This allowed us to funnel the bears into a position where Todd could get a shot. 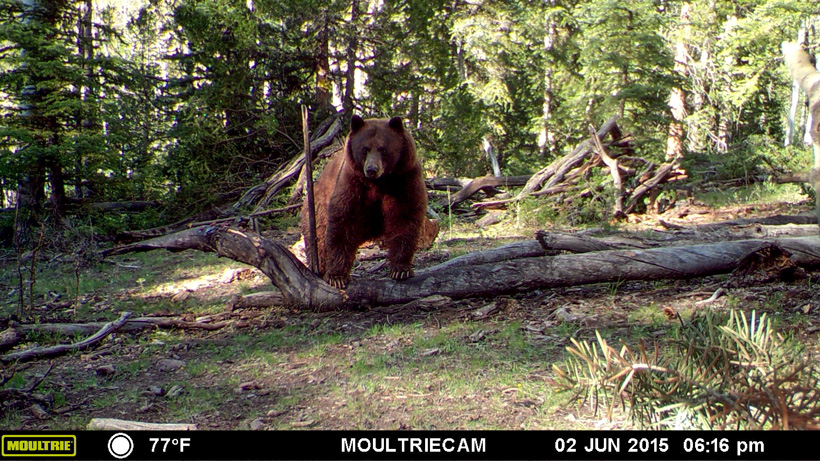 Every two days Todd made the trip over to bait both sites and check trail cameras. For a week it appeared that nothing was happening and we were starting to debate other ideas for moving bait locations. Then, as if out of thin air, on June 1, multiple bears showed up on camera and one in particular had us pretty excited. 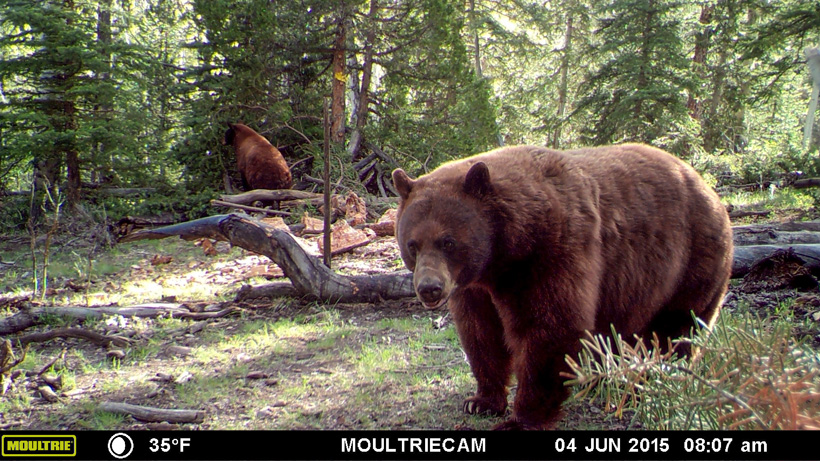 Although the boar did not appear to be the tallest, he looked nice and solid. He had a big head, huge neck and was definitely the dominate bear in the area. Todd immediately named him “Tank.” The hunt opened on June 6 and from the first day he showed up on camera until the opener Tank was in regularly during daylight hours. 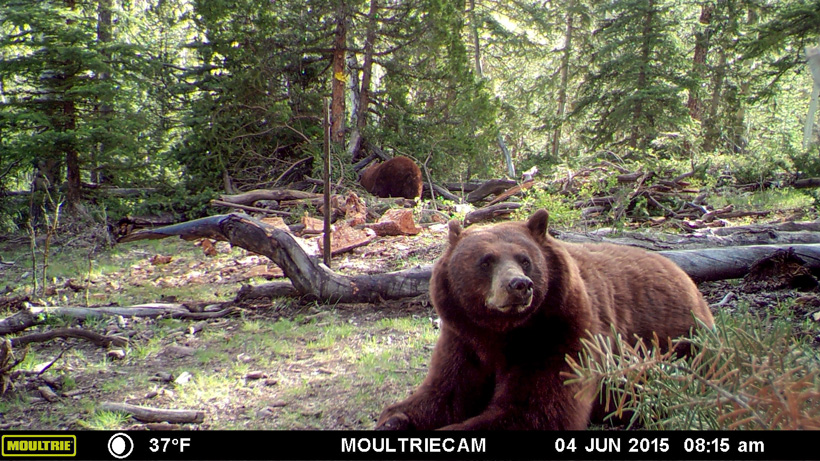 I remember talking as we walked out after baiting two days before opening day, saying, “This will all be over by 5 p.m. on Saturday. All the hunting is done.”

I could not have been more wrong. 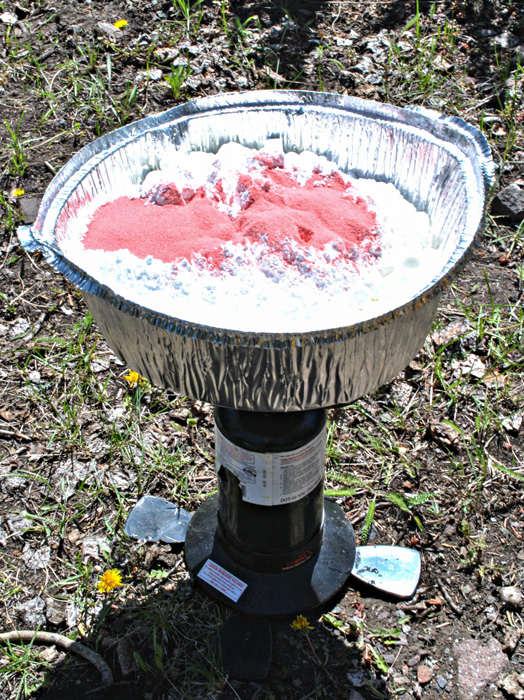 Opening day came and we decided that it was best to maintain the status quo for baiting, we traveled over mid morning, loaded up the four wheelers and made the ride then hike into the bait site. We baited in the same manner we always had: 40 lbs. of dog food, two 5-gallon buckets with meat scraps and materials to cook up a batch of “bear crack.” 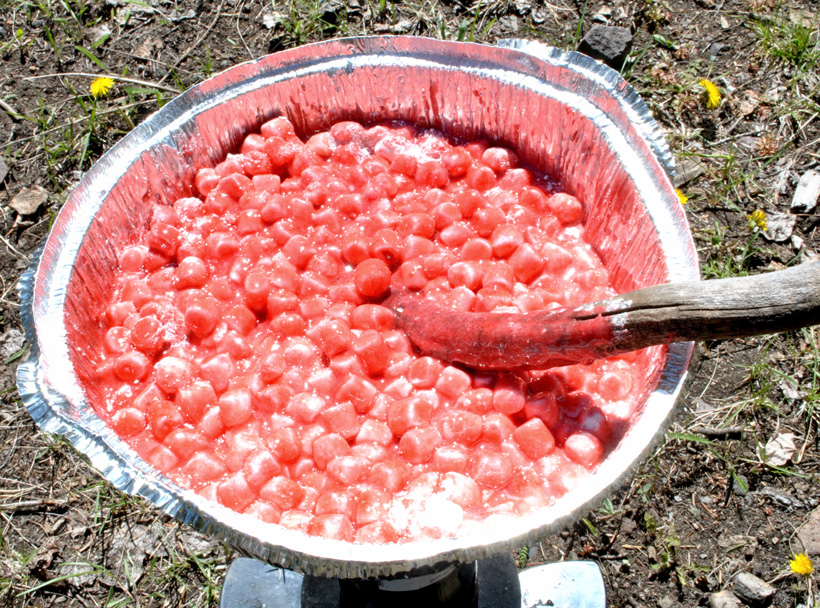 Bear crack is commonly used to bait bears and can contain a manner of different types of food. Our formula consisted of a package of marshmallows, a half gallon of syrup, a packet of powdered sugar and a packet of strawberry jello mix. 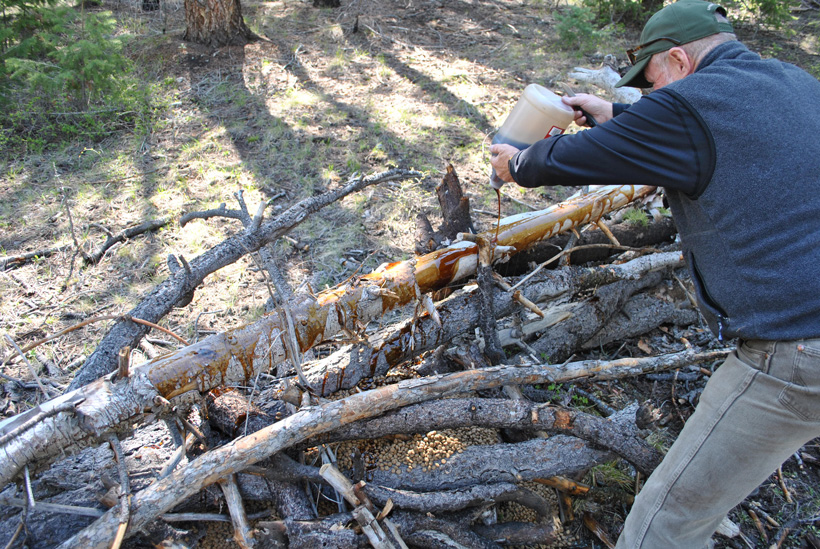 We then used a small burner to heat the mix into a slimy pink slurry that we poured over stumps, logs and anywhere else it would stick. The remaining goo in the bottom of the disposable pan was used as a candy coating for a package of bacon that we cooked up and laid out over the bear crack. 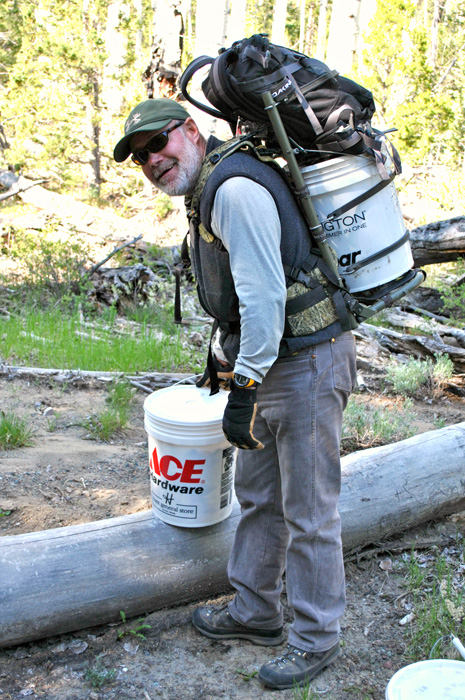 Like Todd regularly stated, he was going to feed these bears well until the hunt was over. After we finished baiting, we loaded up the empty containers and headed out to the four wheelers where we changed clothes and sprayed everything down with scent killer. By 3 p.m. we had quietly snuck back into the bait site and had made our way up into the tree stands. 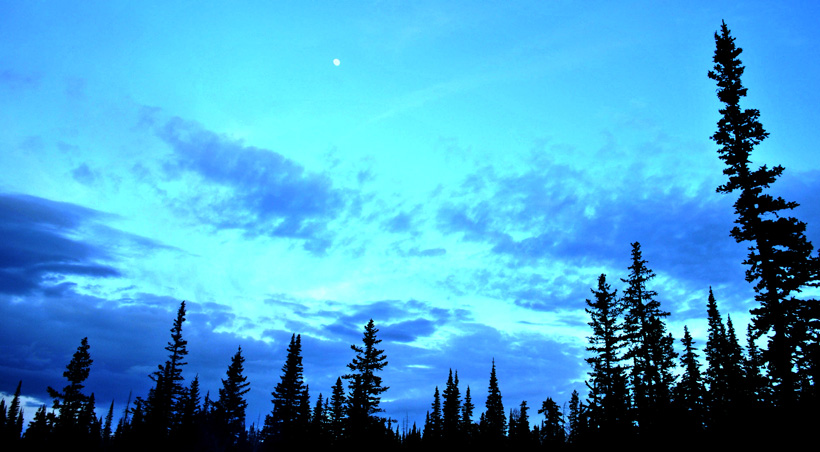 Opening evening was cold and breezy, but by 6:45 p.m. I caught movement up the trail from the bait and I saw Todd’s focus shift in the same direction. For several minutes he was frozen and I knew there had to be a bear in his sight. Then as quickly and quietly as the first time, a bear walked through a small clearing and continued a half circle back to our left. We could see the bear working through the timber and eventually the bear stepped out into the open, cautiously working toward the bait site. Thrilling is the best word to describe the first sight of a wild black bear slipping through the timber right below your stand. Even though this was not the bear that we wanted, it was still a great moment. The sow fed for a few minutes and then slipped out into the timber. 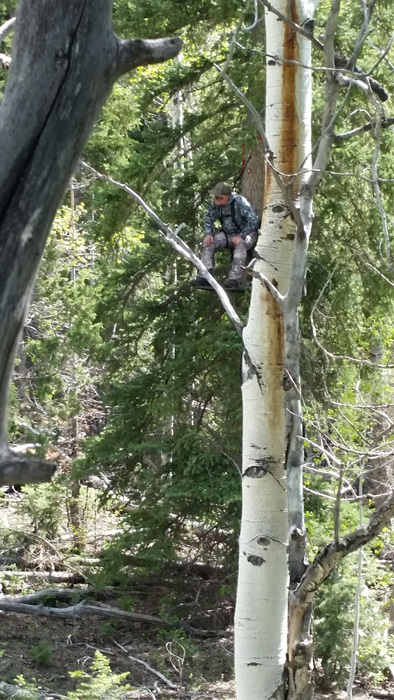 Just before dark, a second bear, almost identical in appearance approached the bait from below. It is interesting that bears, like people, seem to have such different personalities. While the first bear was always on alert, always checking wind and turning to investigate the slightest movement, this second bear was completely relaxed and fixed on eating. We sat watching the second sow eat until well after shooting light. Eventually, we had to come down out of the stand. I watched as Todd and the second sow had a brief stare down about 30’ apart; a tense moment. On the drive home Todd recounted his side of the story. Although I had never seen him, Tank had come in with the first sow and apparently had caught our wind and stopped just shy of shooting distance. He stood snapping his jaws and pacing back and forth for a few minutes before melting back into the dense timber. 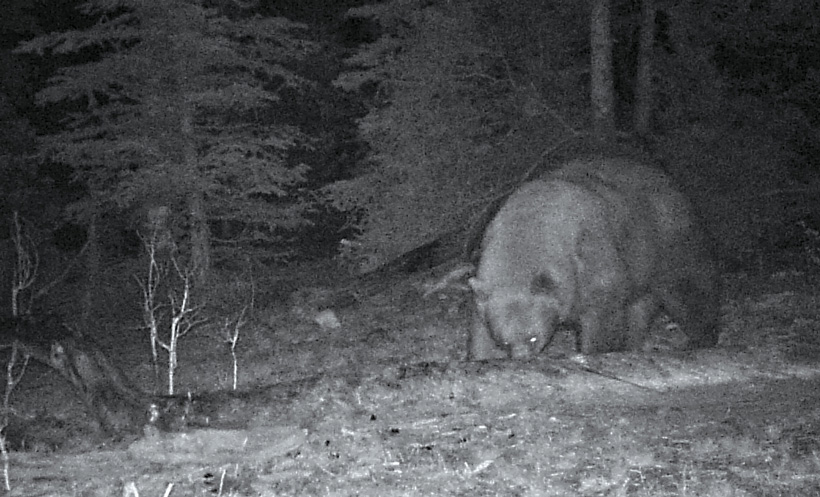 The following day we made the trip back over, baited and checked the trail camera. Tank had come in, after dark and long after we had left. During the second night we froze in the stand and did not see a bear at all.

Over the next week, I had work to deal with and was not able to hunt so Todd and another friend continued to sit day after day. Bears would come and go, but Tank would not show himself during daylight hours while they were in the stand. He would either show up just after dark or early the following morning. The second weekend I able to get away and climb back into the stand to watch. We hunted through the weekend and saw some nice bears, but Tank would not commit to coming in while we were there. The work week rolled around again and I was back at work unable to hunt. On Tuesday, June 16, I was sitting at my desk when Todd called to tell me he was headed back to bait and hunt, but this time he had a new idea. Previously, in Utah, if you drew a bait bear hunt permit you were required to hunt with a bow only. This past year the law was changed to allow a hunter to use a firearm over bait as well. Todd explained that he thought the only way to get a chance at Tank was to climb up onto the ridge farther removed from the bait and try to harvest him with a rifle. 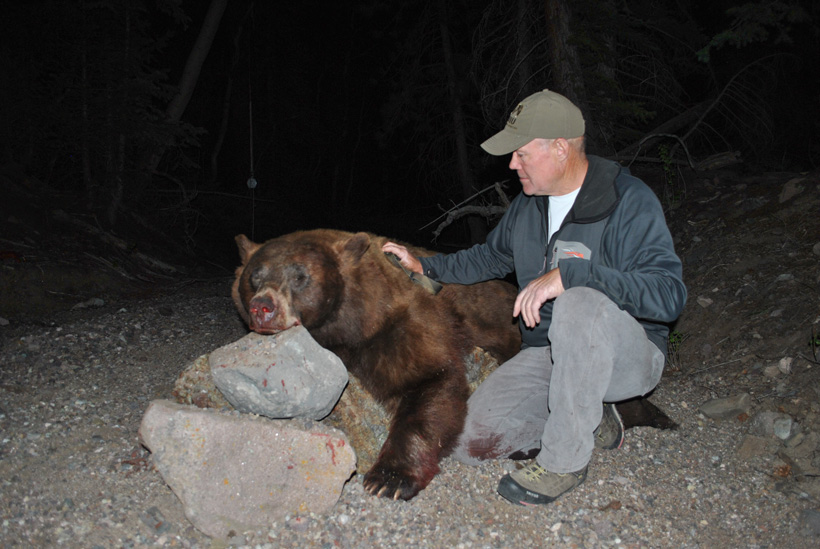 Just after 8 p.m. that night, Todd was sitting 150 yards away on the ridge above the bait site when Tank steadily walked right into the bait and presented Todd with a perfect broadside shot. With a steady rest Todd slowly squeezed the trigger. 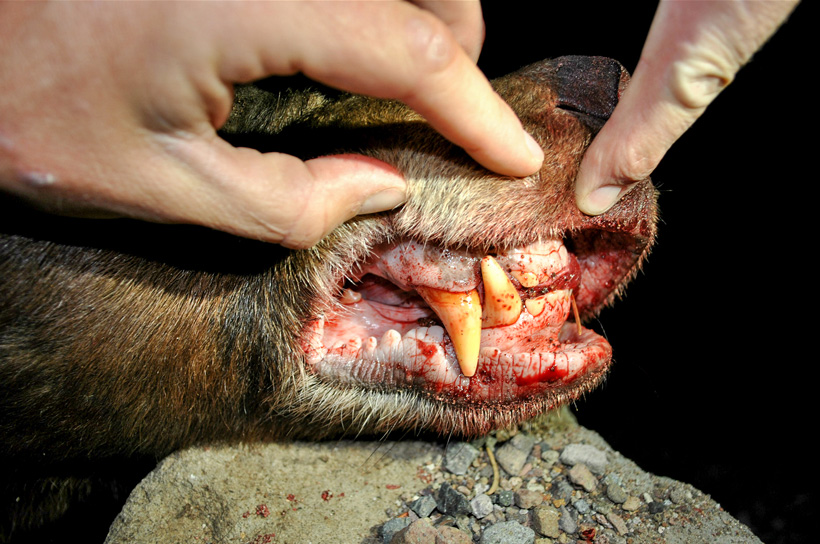 Tank lurched with the shot and sprinted a short distance before expiring. I got the phone call shortly after and within an hour I was headed over along with two other friends and coworkers to help pack the bear out. 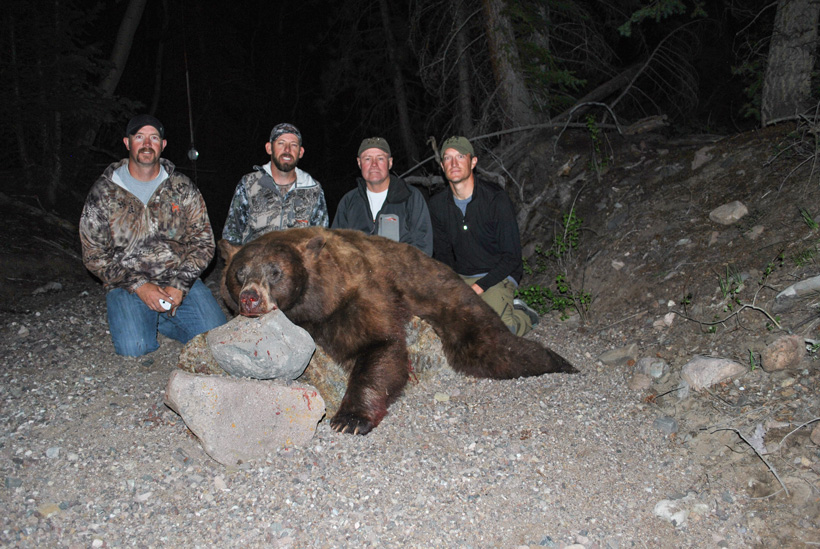 Four guys standing around in the dead of night taking pictures, telling stories and cracking jokes while admiring and celebrating the hunt for an amazing old bear is why we do it, right? Great moments make great memories. 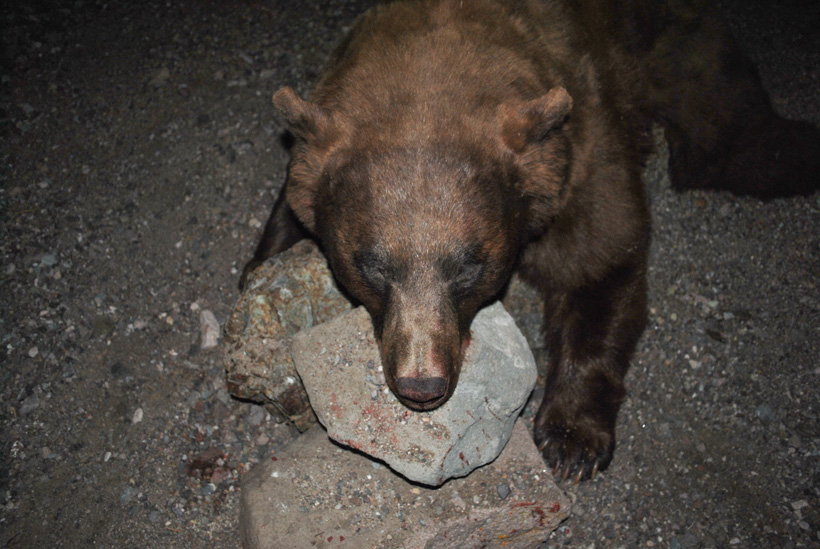 Special thanks to Josh Pollock and Jason Nicholes for showing up in a moment’s notice to help skin, cape and pack meat. Green scores suggest that Tank will likely qualify for Boone and Crocket which is icing on the cake.