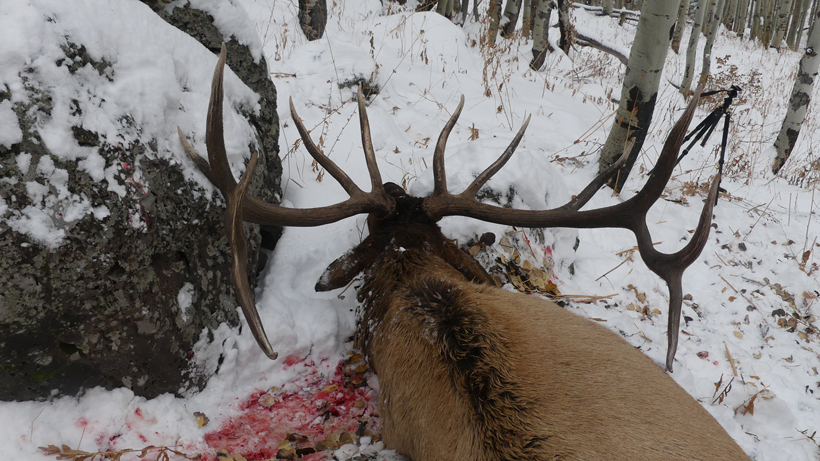 Colorado public land over-the-counter (OTC) elk hunts can be just as crazy as the stories you hear about them. Lots of orange, lots of camps and very few animals. But they can also be extremely rewarding and unforgettable.

I had the last minute opportunity to go try my hand at an OTC elk hunt in the fall of 2019. I was accompanied by Jared Pierce, Gear Expert & Buyer for goHUNT. This was my first elk hunt where I had a tag. I was more than excited to go on this out-of-state hunting adventure after a ton of planning and research on Filtering 2.0 to find a unit to try out.

I prepared by fine-tuning my loads for my Browning Hell’s Canyon Speed 7mm-08. I ended up using 150 grain Hornady ELD-X bullets, which grouped well with 43.5 grains of Hodgdon H4350 power.

As we entered the Colorado mountains, we started seeing orange, lots of orange. There were big elk camps — probably 20+ — and most of those camps had four to five trucks. We saw a lot of road hunters in orange cruising the roads, too. It was just as I had envisioned it. Now I understood why so many people told me to shoot anything that was legal. I started to get the feeling that this was going to be a competitive hunt. It was a little discouraging, but I was hungry for success and was ready to put in the work to find elk. 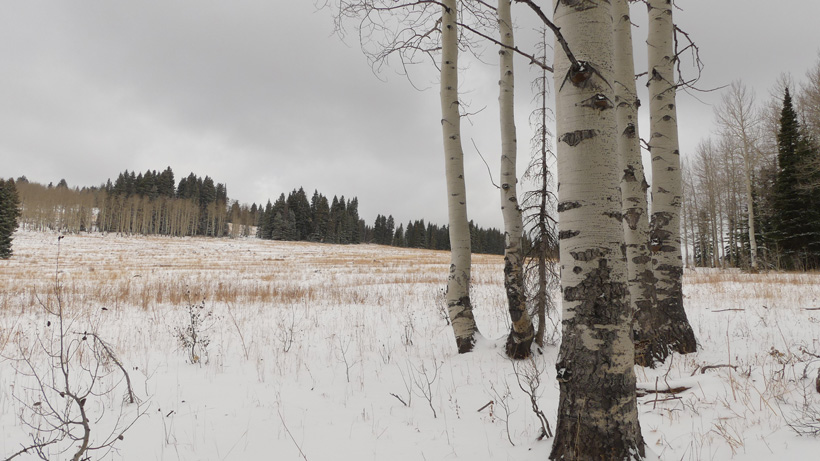 Our opening morning started early and we were the first to cut tracks in the fresh snow. As we drove by elk camps, we could see smoke coming out some chimneys with faint lighting inside while other camps were completely dark. We made it to high ground far away from any elk camp and we hit the trail. It was a great feeling to be the first to the trailhead with fresh snow on the ground. I hadn’t been to this area before and I didn’t know what to expect when the sun came up, but I was eager.

As the sun began to rise, we started to see how beautiful the area was with the big pockets of dark timber, open fields and aspens. It was new country for me and I loved glassing it, trying to find elk. We ended up finding one elk on day one, but we couldn’t determine if it was a bull or cow, but we were excited to at least find an elk. We cut some fresh elk tracks during our hike back up the mountain and followed them for a while, but no other elk were spotted on that day. 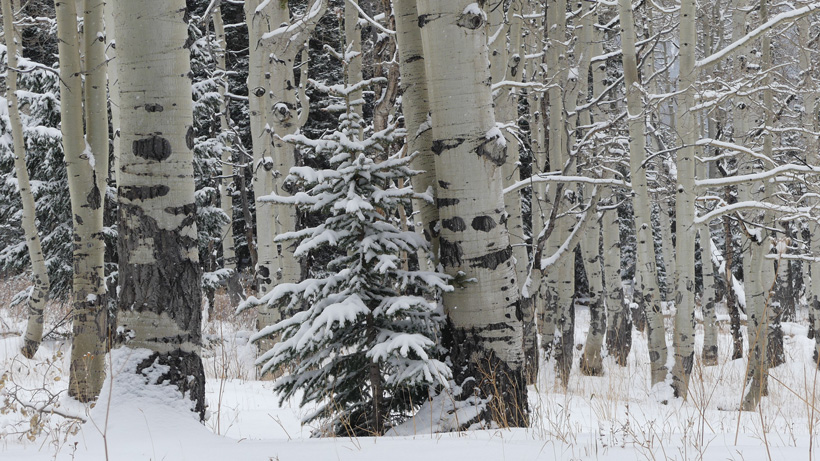 Day two started cold at 19 degrees at camp and we knew it would be even colder in the high country we were headed to. Another hunter from Tennessee ending up going up the same trail we were on and we hiked up to the summit with him. We hiked to the same spot we saw the elk the day before, but it was snowing so hard that we couldn’t glass much at all. We made a fire and started to wait out the snow. We kept the fire stoked for about three hours while the snow kept coming down. Finally, the snow eased up and we started our ascent back up the mountain to try to find some elk.

As we made our way through dark timber, we were high and we could see a lot of country. It was great country, but everything we could glass was so far away. It was almost tempting not to glass because I knew it would be so much work to get off our mountain and over to another mountain range, but we glassed it anyway. 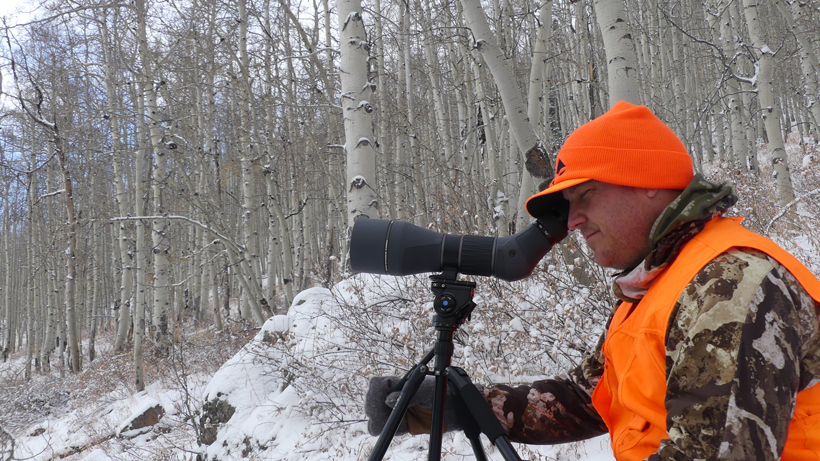 I spotted a dark silhouette that looked like a bull’s head at first glance. We got out the spotter and, indeed, it was a bull! He was small, but he was legal and, instantly, I was ready to go in for him. There were cows feeding around him, but the bull was bedded. We made the plan to have Jared watch the bull through the spotter while I went in after the bull. He was 1,300 yards straight across from us, but I had to come off the top of my mountain down to cross a big open field and then work my way up another mountain to get to the elk. I took pictures and video before I started off the mountain so I could reference them to navigate and find the bull once I got there because I knew everything would look different when stalking in from a different angle.

As expected, everything looked different when I got to the new mountain, but I tried to stay pointed in the right direction and made progress to close the gap between me and the elk. I was excited, but tried to stay focused on making progress to get closer. Not long after that, I saw dark fur in through the trees with my naked eye. I lifted my binos and confirmed it was a bull! I could only see his neck and his 5th and 6th points. You could tell he was big, but I didn’t really know how big he was — just that he was legal and that I wanted to shoot him.

I had very little space between all of the trees for a shooting lane. I could have taken a neck shot from where I was, but the animal had no idea I was there. I didn’t want to rush a shot, so I stalked in closer to get lined up with him for a better and cleaner shot. The shooting lane was narrow and gave me about 2’ of room to shoot through. I dropped down to one knee and ranged just beyond him at 140 yards. I propped up against a tree with my trekking pole supporting the base of my rifle. I finally had him in my cross hairs, but I never saw his face since he was feeding and all I could see was a portion of his neck and some of his antlers in that small 2’ window. His vitals were blocked by the trees the whole time I was watching him. I just focused on my breathing routine so I could be steady and ready once he took a step.

After about a minute of watching the bull, he finally took a step and his vitals were exposed. I audibly said, “Game time,” and executed a shot. I saw the bull get hit and quickly he was out of my view. I couldn’t believe what had just happened. I radioed Jared and let him know I hit the bull. He asked if it was the little one or the big one and I said, “It was the big one!” Jared shouted with joy! Not long after that, Jared saw the bull go down and he worked his way off the mountain and towards me. 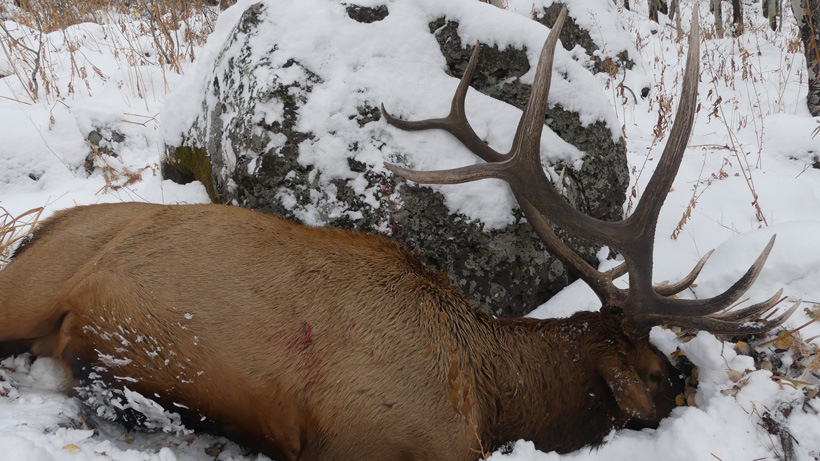 As we approached the bull, we both realized the bull was a lot bigger than we expected. He was wide, he had mass and he was symmetrical. 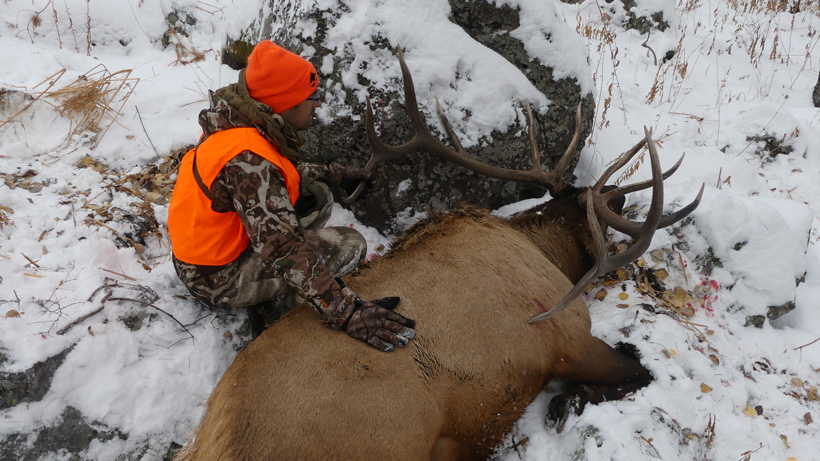 His body was huge. Picking up his head the first time was incredible. The bull went about 30 yards from where I had shot him. The shot placement was good and I couldn’t have been happier. 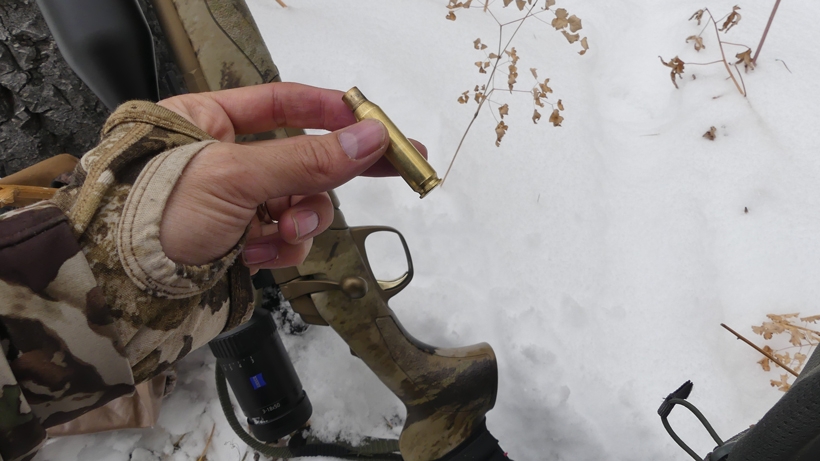 It took us many hours to process the elk and get ready for the heavy pack-out ahead of us. Fortunately, Jeremy, Jared’s friend, came out to help us for the pack-out. At 11:30 p.m., they both helped me stand up for the first time with the bull head and cape on my pack and it was at that moment, I knew this was going to be the hardest physical event of my life.

There were big round slick rocks all over covered in snow. It wasn’t overly steep, but it was slick and somewhat dangerous. I only fell on my face once. Another time I started to fall and I wrapped my arms around a tree; the weight of the head swung me around the other side of the tree like I was a piece of rope.

As the night wore on, I could only go 15 to 20 steps before I had to collapse and rest. I had trained hard for the mountain prior to the hunt, but my body was breaking down and muscles were failing. Jeremy had offered to take the load a couple times, but I wanted to keep going so I did. At about 1:30 a.m., he offered to take the load again and I tapped out and said, “Yes, I’ll take the help!” 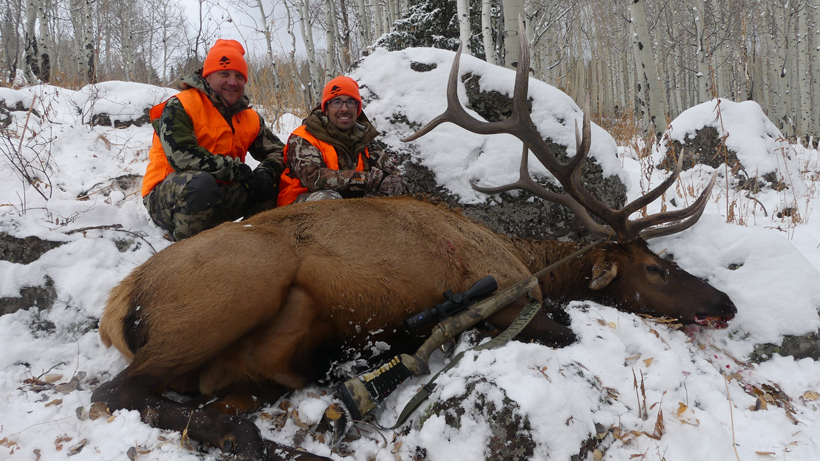 It was such a relief mentally and physically to pack just a front shoulder the rest of the way versus the heavy head and cape. Both Jeremy and Jared took turns and helped on the final stretch to get to the trailhead. We got to the vehicles a little after 2 a.m. with 16° weather keeping us cool. Both Jared and Jeremy said that it was the heaviest pack out of their lives. It was by far my heaviest pack out I’ve ever experienced. It felt amazing to sit and ride back down to camp. We ended up getting to bed around 4 a.m. and slept in before going back out the next day to hike out and pack the rest in. 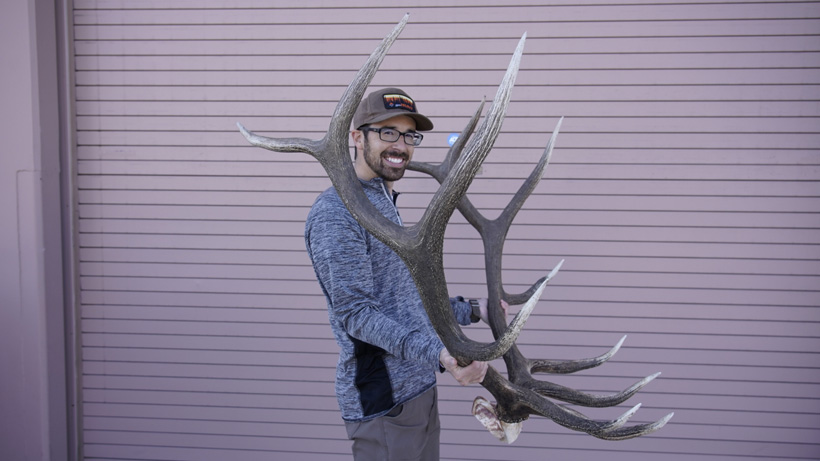 The hunt and experience were incredible. I couldn’t have done it without Jared’s and Jeremy’s help. My family and friends have enjoyed the meat and we look back on the experience still shocked about what we accomplished. The bull was a giant. 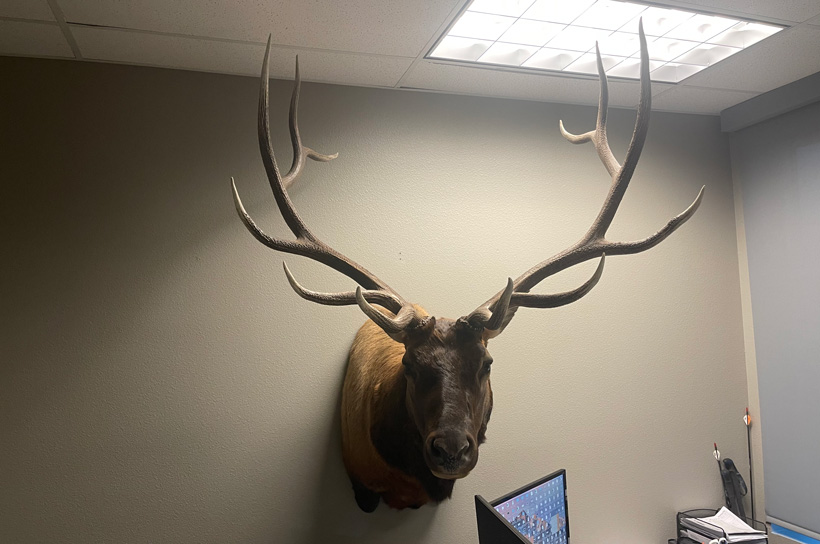 It's nice being able to look at this bull all day at the office.