Alaska moose hunt goes from risk to reward in seconds 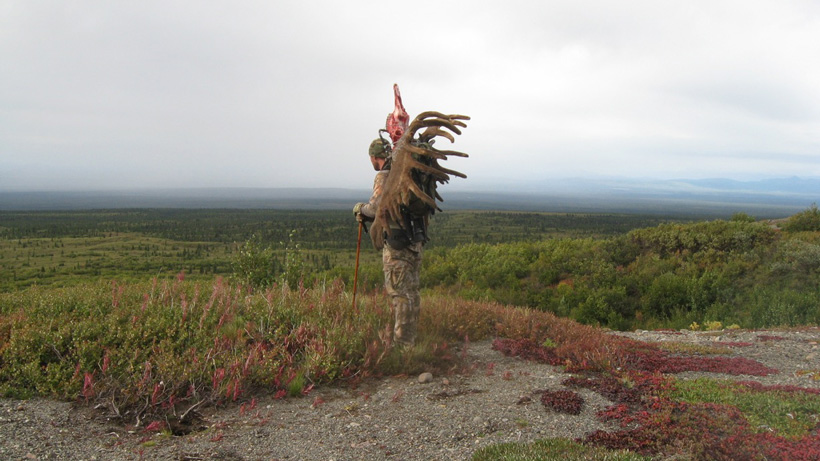 I can’t attempt to explain that amazing feeling when a bush plane drops you off out in the middle of Alaska’s wilderness, then bounces down a makeshift runway and disappears into the horizon. For those of us that have been fortunate enough to experience it, we no longer question why Alaska’s called “The Last Frontier.” For those who have not experienced it, put it on your bucket list and do whatever it takes to make it happen. I consider myself lucky because I have experienced this before on a Dall sheep hunt. And now, I had the chance to experience this incredible feeling again; this time, however, I would be in search of an Alaskan moose.

For years, I had been looking forward to putting together a moose hunt and had countless conversations with my dad about what to expect and what size standard I was looking for.

“Dad, show me a bull over 60” wide with nice paddles, good brows and lots of points.” Then we’d both laugh and continue our conversation about the logistics of the hunt. While I would be happy with any legal bull, I didn’t go with those intentions. Instead, I had my sights set on a really good bull if we could find one. My dad has harvested some really good bulls over the years and I was more than confident on his ability to judge them.

On this trip, we only had six days to find a good caliber bull, take him and pack him out. It wasn’t as much time as I would of hoped for—especially considering it might take two of the days to pack it out if we were successful. But I couldn’t ask for more time away from work so we needed to do the best with the time we had.

We were dropped by the Super Cub at our campsite on the morning before the season opener. I was very anxious to get camp set up and start glassing. Of course, it takes significantly longer to set up camp when you can’t fight off the urge to keep intermittently pulling your binoculars up and looking around. Once camp was finally ready, we had a bite to eat and started glassing. That evening, while we sat at a good vantage point, we spotted a couple of nice bulls. One bull that we looked at fit our criteria and it wasn’t hard to recognize him because he was losing velvet on top of one paddle. If we found him again on opening day, we wouldn’t hesitate on a stalk opportunity. After a pretty sleepless night filled with anticipation, opening morning arrived. We went out to our vantage point with binoculars, tripods and spotting scopes and started scouring the area.

Unfortunately, we never did find that bull from the first night again, but did spot a couple of other bulls that we hadn’t seen during the night before that were definitely interesting candidates. By mid-morning, I was looking through the spotting scope at a bull that we figured was about a mile and half away.

“I don’t know how wide he is, but I really like the looks of this bull. He looks taller paddled then the other bulls and has a lot of points.”

That bull moved out of sight before my dad could get a good look at him, but he had spotted a bull worth getting a closer look at too, which was about a mile out and maybe a half a mile from the bull I was looking at so we decided to head down off the ridge to get to a closer vantage point.

First, we decided to try to turn up the bull that my dad had spotted. After getting within about 500 yards of where we thought he was bedded, we patiently glassed the area trying to find him. Well, one of us was patient. After a couple hours had passed without spotting him, I was getting anxious.

“Dad, I really like the looks of that other bull. I think we should go look for that other bull.” After repeating these lines a few too many times, my dad finally agreed with me and we headed in the direction of where we lost sight of the other bull to try to turn him up.

We didn’t make it more than about 500 yards before we had spotted a bull in that area. At this point, we didn’t know if it was the one I’d spotted or not. I quickly set up the spotting scope and my dad wasted no time before saying, “That’s a shooter.”

After only a few minutes of watching him, the bull bedded down. We checked the wind, planned a stalk and started making tracks. There was a small ridge that we figured would put us within shooting range of him. We hustled during the first part of the stalk and then slowed down, checking the wind as we neared the ridge. I remember my dad saying, “They can hear pretty good, so let’s take it easy as we crawl up the ridge.” He hung back right behind me as I went up and peeked over the ridge.

“Holy shit, he’s right there,” I whispered as I pulled my head back out of sight and looked at my dad in disbelief. The bull was on his feet and looking in our direction a mere 175 yards away from where we were.

“Can you get a rest against that tree and shoot him?” he asked.

“Uh, yeah,” I replied. After all of the years I’d spent dreaming about this moment and all of the time we spent planning this trip, now I was hesitating. I don’t know what I was thinking; we’d determined an hour earlier that this bull was a shooter. Maybe because it was so early into the hunt, I felt like I needed another confirmation that this bull was what I was after. Quickly, I rested my .300 Ultra against the tree and sent a 200 grain AccuBond into him. The bull dropped in his tracks. I rolled over on my back and looked at my dad with that “did this just happen” look on my face. 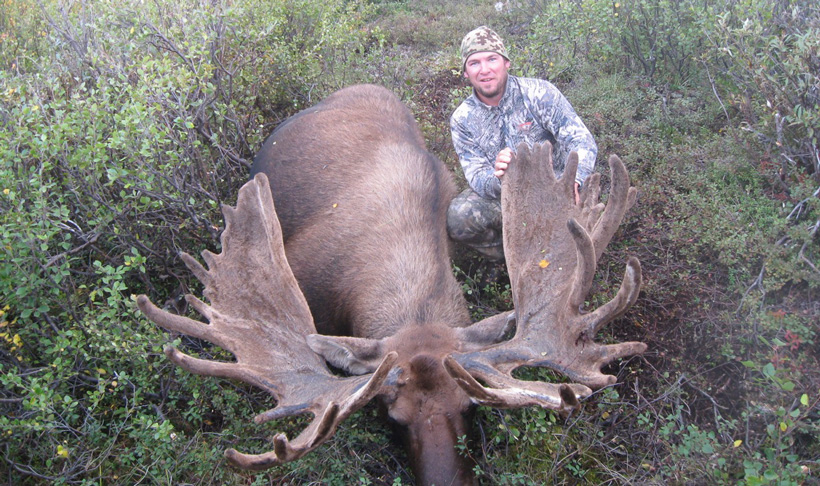 I was an absolute mess as my dad would put it. I couldn’t believe it happened so fast; it was hard to take in all at once. We made our way over to the bull and, after pulling his head up and looking at him closely, I realized this was the bull I had spotted earlier. I remembered the three distinct points that were close together halfway up his left paddle. 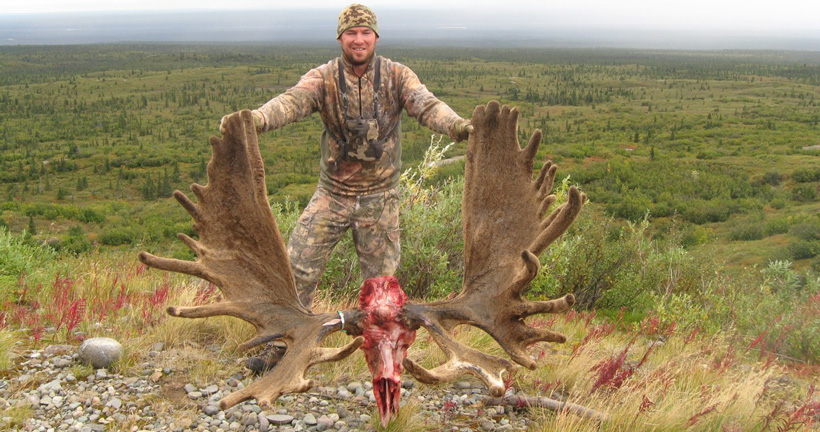 One of the first things we did was put the tape on him: “62" and change.” I couldn’t believe it. We were looking at a bull over 60” wide with nice paddles, good brows and lots of points! 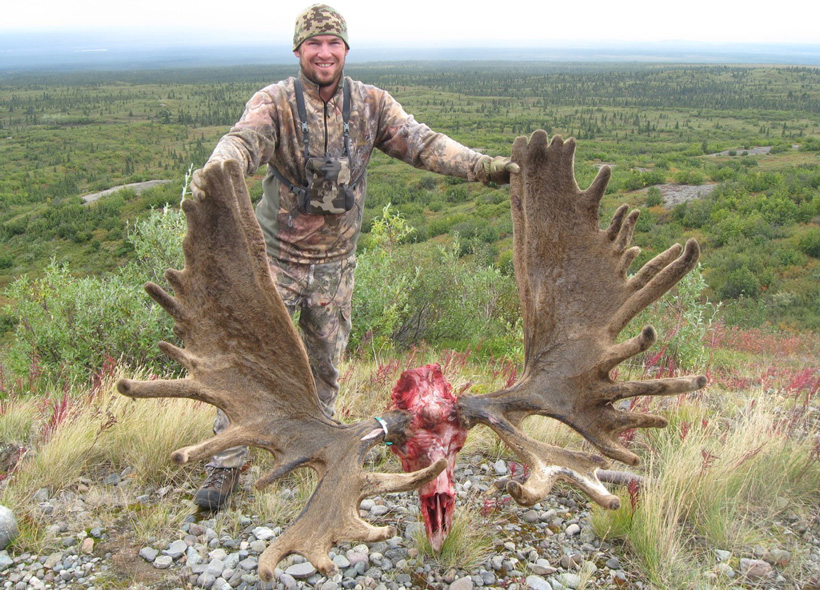 A slightly different angle showing off the width, points, paddle depth and scenery. 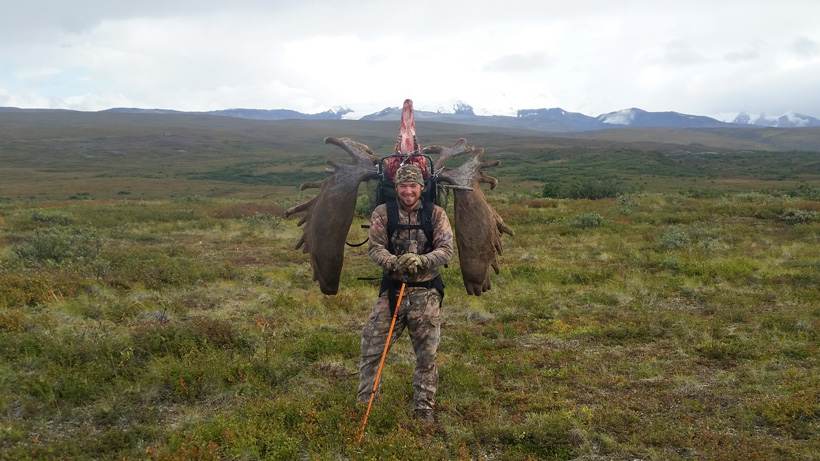 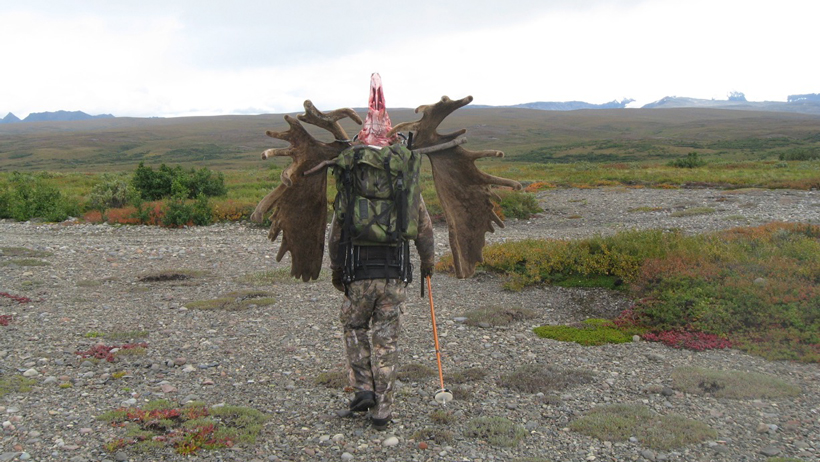 The pain of packing meat never felt so good. It took two days to get the meat to the area for the Super Cub to pick it up... but it was so worth it! 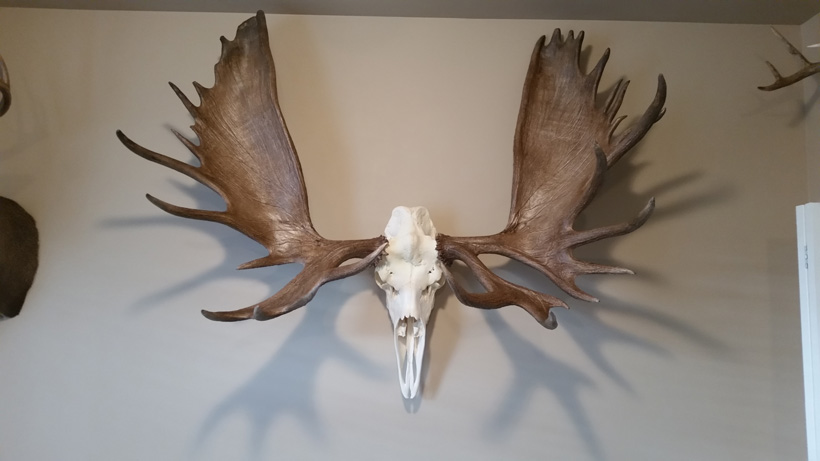 By the time we got out, the velvet was in pretty rough shape. I stripped it and had my taxidermist stain it. This is a trip I'll never forget!