Age limit in the backcountry? 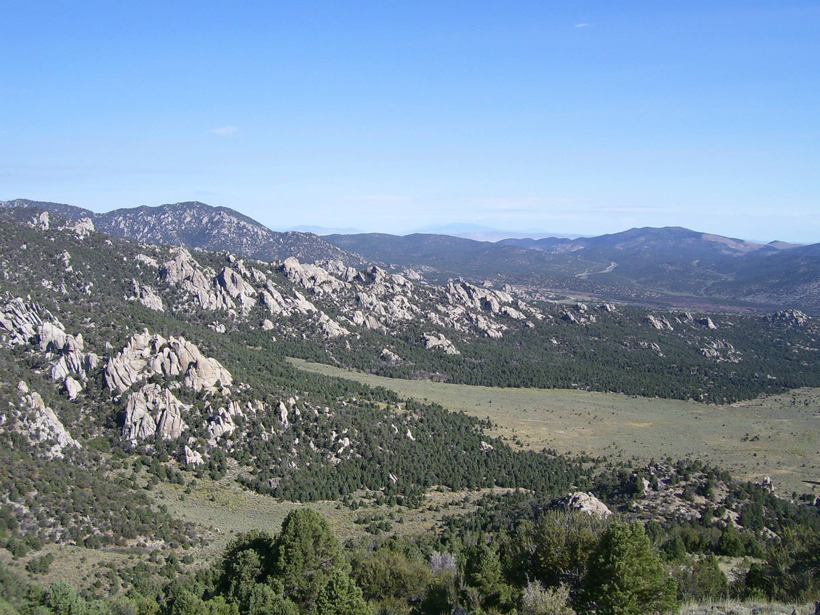 For 30 years, work and family obligations did not allow time for archery hunting, but when I retired in December of 2011, single and with all my children grown, archery’s appeal was calling once again.

My main concern was my upcoming neck fusion surgery in January of 2013. My doctor assured me that I could start practicing with a bow two months after the surgery so I used those two months of prescribed relaxation to figure out which bow I would purchase. I decided on a Bowtech Assassin RAK package as my entry level bow. 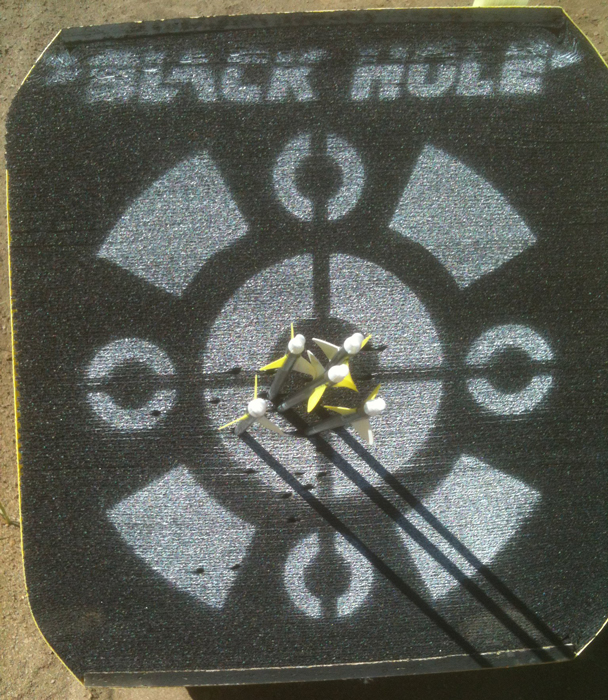 Once I had the Assassin in hand, I knew that I needed quite a bit of practice before heading out on my first hunt. I also needed to turn in my Nevada hunt applications. My choice for a bull elk area was made easy because of a previous hunt with my brother-in-law in that same area. To prepare, I started lifting weights and taking long vertical hikes in the surrounding mountains near my home in Sparks, Nevada. 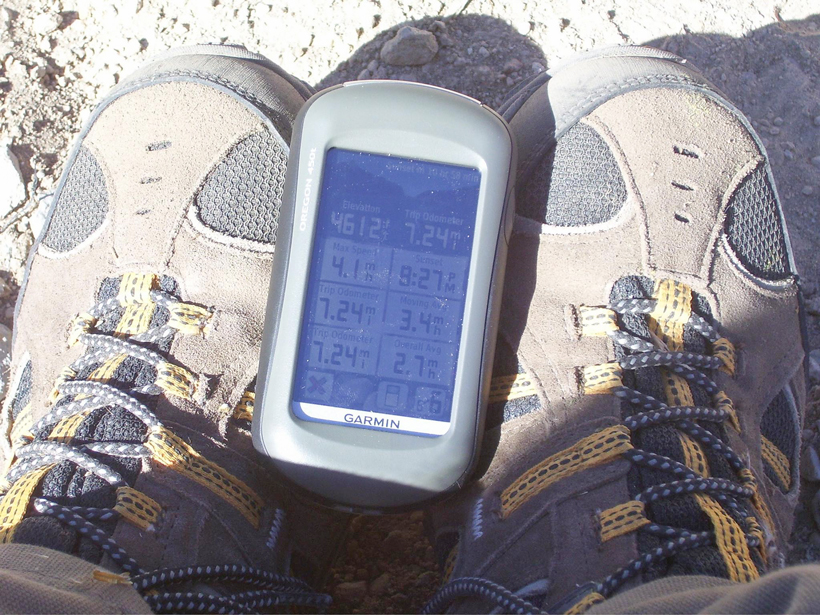 My anticipation paid off. I drew my bull elk tag for my first choice. I knew that I would be alone on this hunt, hundreds of miles away from my family and 60 miles from the nearest small community. My family’s main concern was safety so I bought a SPOT messenger. With this unit I would send a message each night to the family so they would know I was in camp and safe. This message also gives people your location on a topo map link and also has an emergency button if an injury occurs. My favorite button will always be the custom message button. I programmed my custom message: “I have an animal down and I am packing it out.” 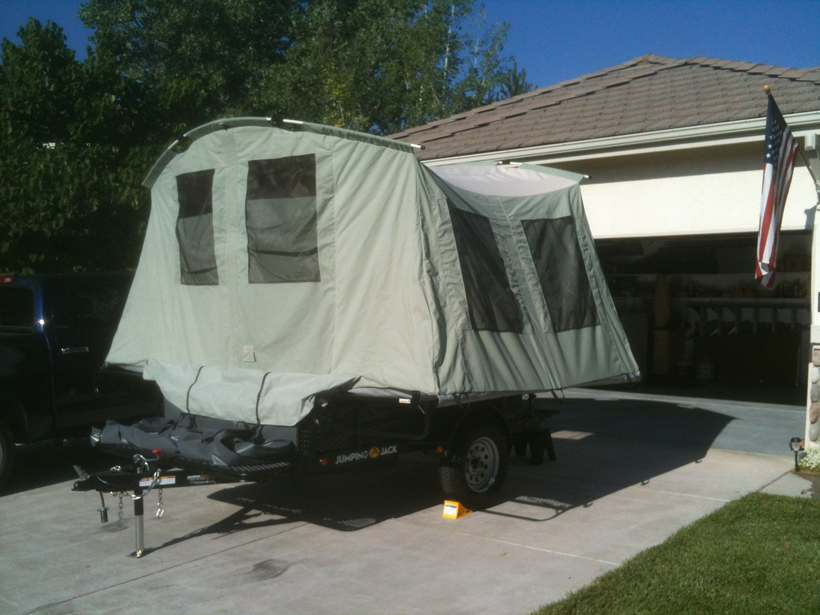 I worked for three months for a nursery merchandiser at Home Depot. We stocked plants and trees in the garden department. It was very physical work and helped me regain strength and stamina. The goal of taking a bull elk was also pushing me to be in as good physical condition as I could. I also purchased a new Jumping Jack tent trailer for this hunt. I did not want to crawl in and out of tent all season.

Although I had been on an elk hunt in this unit, I knew that I needed to scout water sources and spend time in backcountry with my topo maps and Nevada GPS. While scouting, I marked all sources of water that showed up on the topos with blue markers. I marked all roads with pink markers. The areas that were private or unable to hunt I outlined in bright yellow. 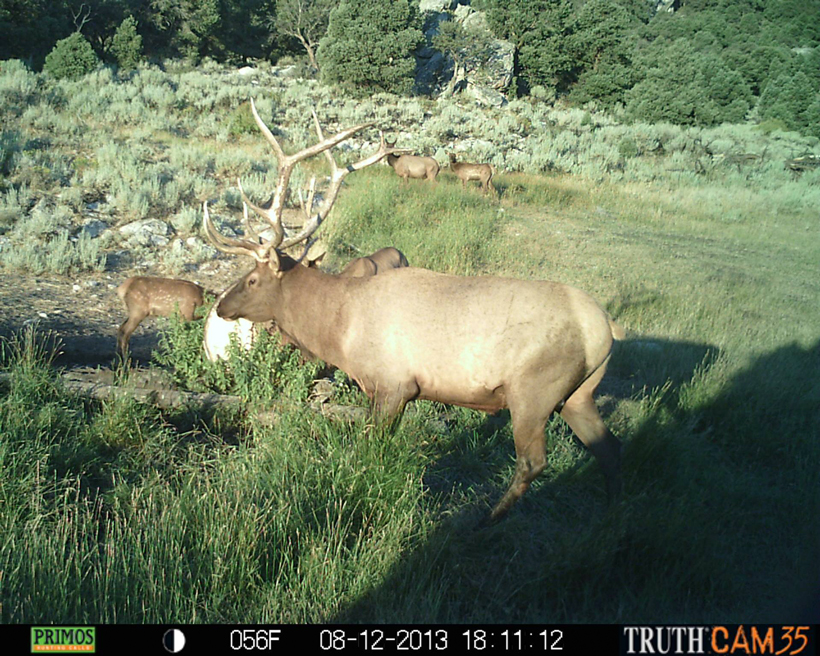 A 5 x 6 bull elk was using this tank along with a bunch of cows, calves and smaller bulls. It was the middle of August, so there was no rut activity for 2 or 3 more weeks. I found a pond and cabin about six miles from this tank and decided to set under a Pinion pine and see what would come in. 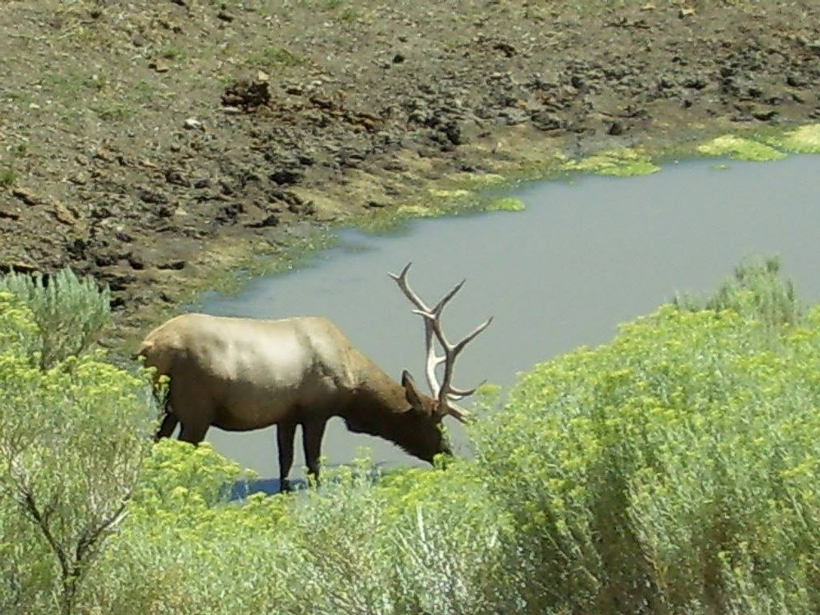 This six point bull came in, drank and then played in the water until he cooled off. He was 60 yards from me and walked within 35 yards at one point. 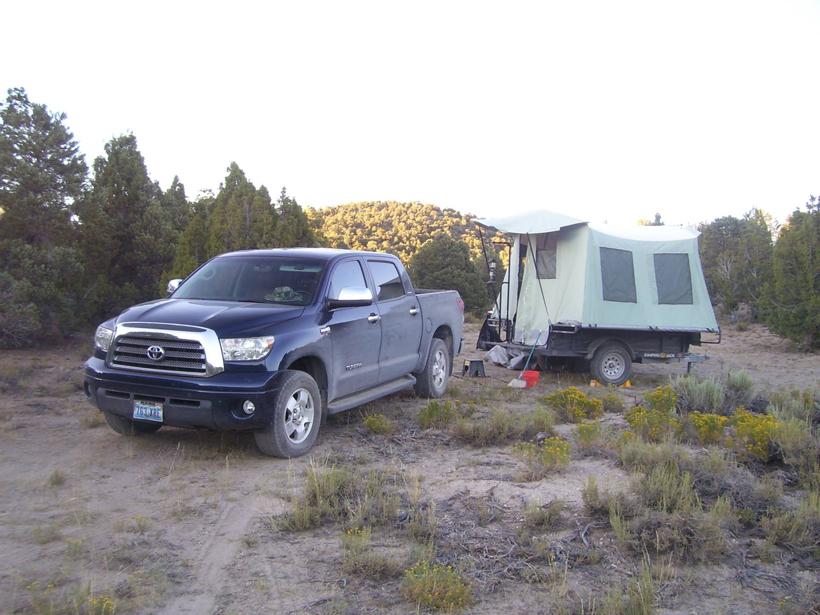 I had pictures from four different spots and knew that there were elk using the water sources. Now I needed to pick a camp spot for the hunt. I packed up and headed home knowing that in less than two weeks, I would be back chasing elk during the rut.

All summer I had worked on getting my gear together. I had extra batteries for the GPS, a laser range finder, the SPOT unit, flashlights and my cameras. I had tuned all my arrows so the vanes matched up with the broadheads and they spun perfectly. I had put together an archery equipment repair and spare parts kit. I laid everything out on the floor and checked each item off my list. I was ready.

I left home very early so that I could make the six hour drive to camp and have enough light to set up and possibly scout a little. It was three days until the opener and I wanted to set out trail cameras again and see what was happening. 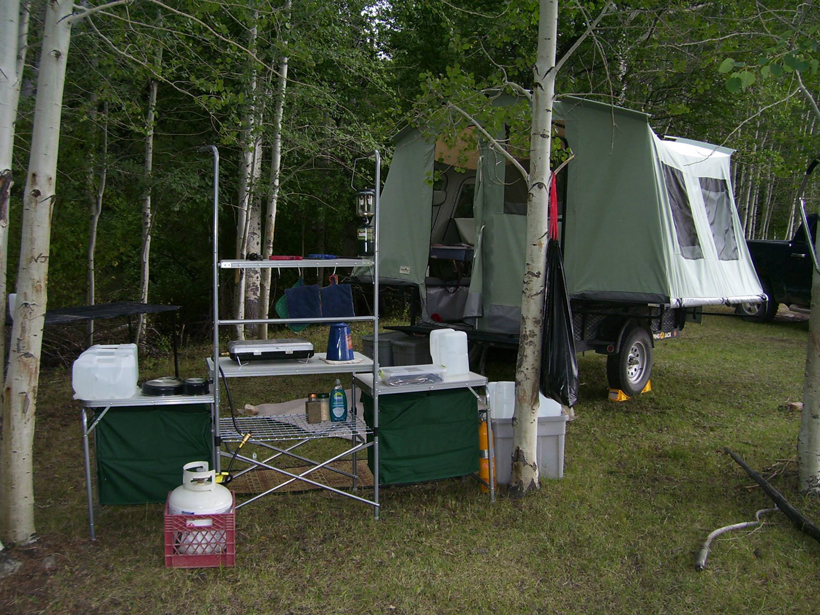 My camp spot would be home for the next 21 days. The first night in camp was the most intense thunder and lightning storm I have ever been in. It rattled everything I owned, right down to my bones! It was a precursor of the entire hunt. 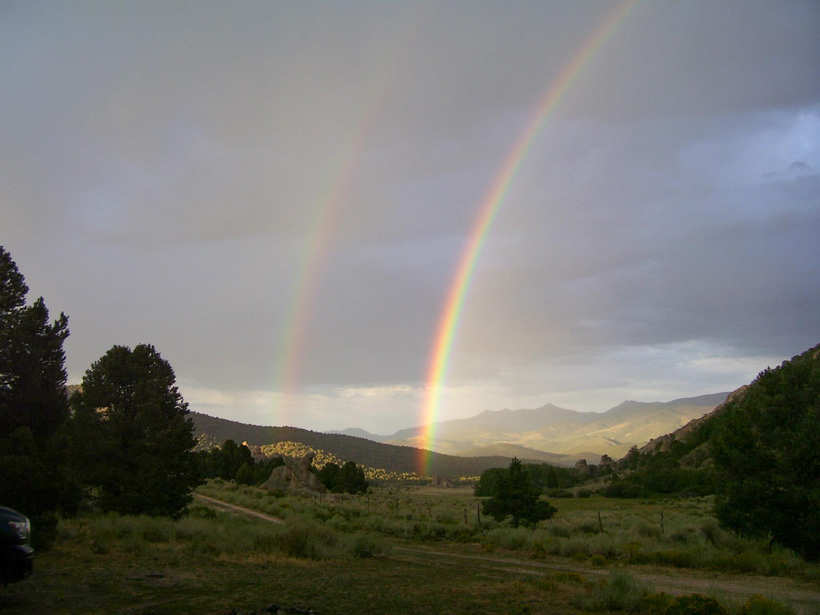 It had rain for 19 out of the 21 days that I was there. It made stalking very quiet, but limited my time in the woods. The elk were not talking yet and for the first three days I did not hear a single bull bugle.

Season opener was spent at the pond where I had seen the six point bull while scouting. I had not been there for more than 30 minutes when a bull bugled off to my right and up the canyon. I cow called and he bugled back. This went on for 15 minutes or so and then he started to get closer. I kept looking up the canyon and I finally saw him walking straight in at about 200 yards. With big dark horns, I knew that this was not a bull I had seen before. My mind raced as I thought, could this happen...the first day?

Suddenly, I saw movement in front of me at about 10 yards. I froze! A pack of coyotes had slipped in on me and were drinking just in front of me. I looked up the canyon and the bull was gone. He must have seen them too and melted into the trees.

Over the next 17 days, I had more close encounters than anyone could imagine. I had spikes within 10 yards, cow elk all around me, wild horses, cattle and bull elk within 30 yards bugling from their cover in the heavy timber. The wind gave me away more times than I can tell. And there was rain, rain and more rain! 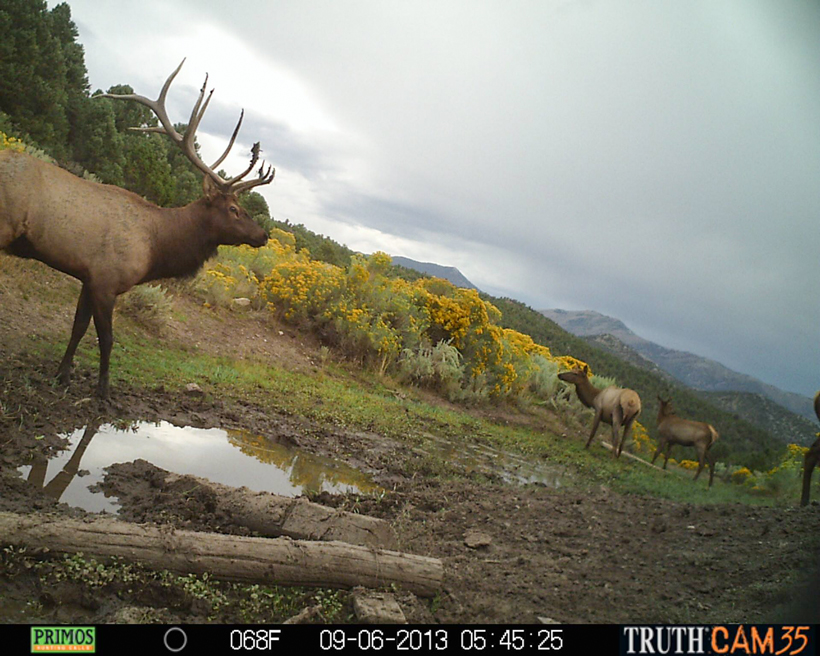 I was getting good pictures on the trail cameras and I moved around to keep from hitting any one area too much. I did not want to run the elk out of the area. The rut was heating up and the bulls were not fighting even though they were really getting vocal. There were just five days left before my hunt would end. 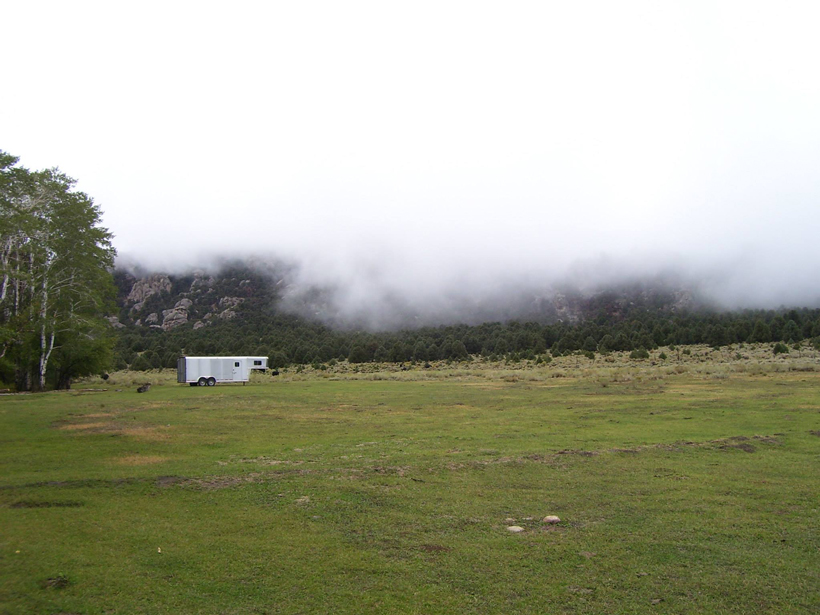 I had visitors in my camp. A father and son pulled in with a huge utility trailer. I went over and introduced myself. Gary and Jeremy owned a well drilling business and were there to scout for the upcoming rifle season. We became friends and they said if I got an elk they would help me get it out. 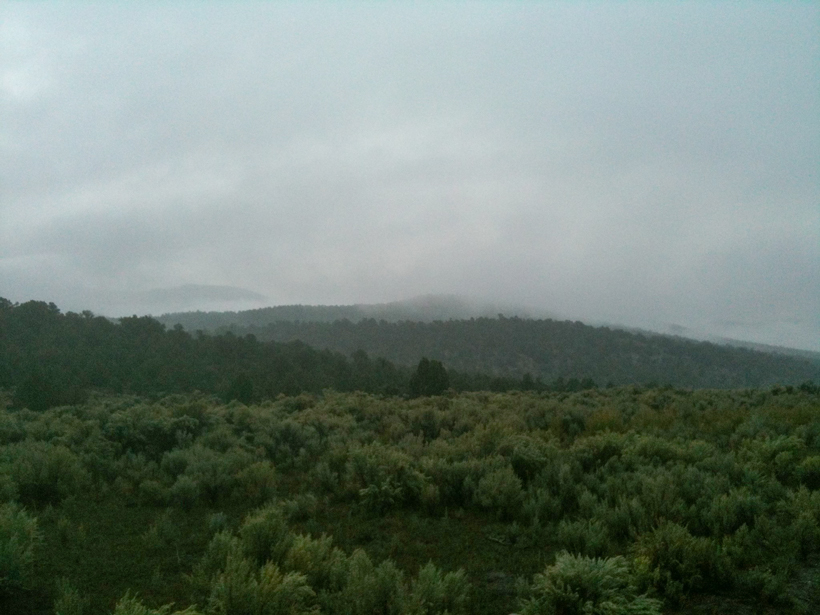 I hunted hard for the next four days and had several close encounters. I woke up on September 11 and it was pouring rain. I was low on gas and needed to wash clothes so I figured this was a good time to head to a truck stop about 60 miles away to take a break while it rained. It rained all the way to the truck stop and poured all the way back to camp. It was the worst rain since I arrived in elk camp. 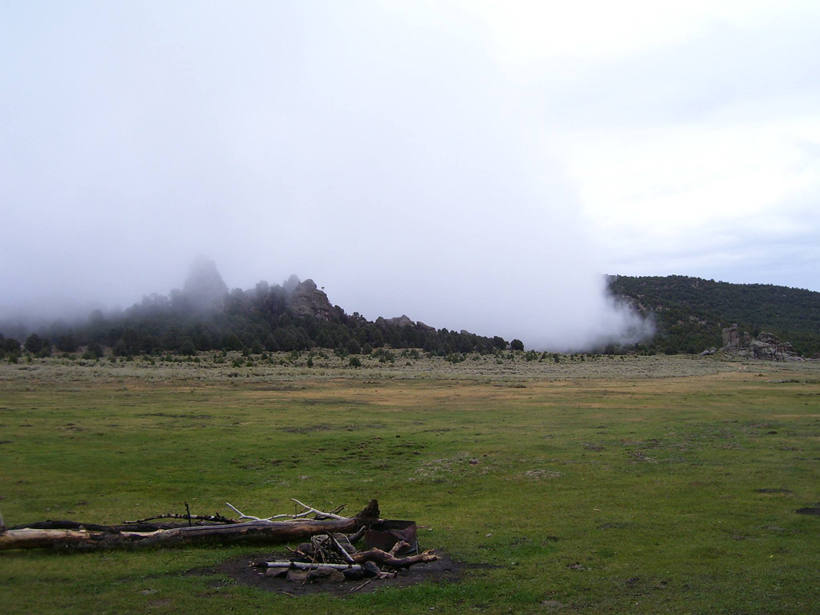 Finally, the rain started to let up and the sun peeked through the clouds. My first thought was: “If I was an elk I would get up and enjoy the rest of the day with some nasty bugling.” 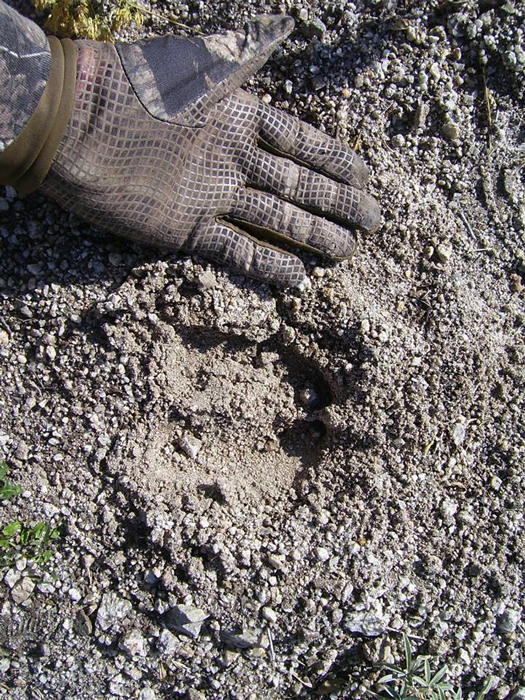 With that thought in mind I headed up to where the two bulls had been challenging each other for so many days. I immediately heard elk bugling far up the mountain. It was very thick and silent from all the rain. I did not do any calling as I wanted to close the distance. I had two elk bugling now. One was above me to my left and one was below me to my right. I had a slight crosswind blowing from right to left. I started a series of cow and calf calls. Each time the bulls would bugle and each time they seemed to get more intense as they challenged each other. I moved slowly up the hill, stopping to cow call and then listen to the bulls answering bugles. I moved uphill a little farther and found a small opening in the trees. I backed into the heavy shade of a Pinyon pine and started cow and calf calling. The demeanor of both bulls changed. It was on!

The one above me was on the move and the same for the one below and to my right. They were both closing in on me. I nocked an arrow. I knew the bull above would get my wind if he circled to my left and I expected that. I figured the bull to my right would be my best chance. Love makes one blind!

The bull above me threw caution to the wind and circled to the right. He bugled and I knew this was going to get intense very quickly. I saw legs coming through the trees. I drew my bow as I saw him getting ready to bust into the opening 10 yards in front of me. He cleared the trees and just stopped in his tracks, looking for that cow. I put my pin right behind his shoulder and released. I heard that thunk that all bowhunters know. He jumped forward and ran about 10 yards.

He ran another 65 yards and laid down. I gave him about 15 minutes before I started to trail him. I started to field dress him when I realized I had left my saw at camp. I headed off the mountain and back to camp to grab the saw and remembered that my new friends were due back in camp that day to get ready for their season. I left a note on their trailer door explaining that I had a bull down and its location. 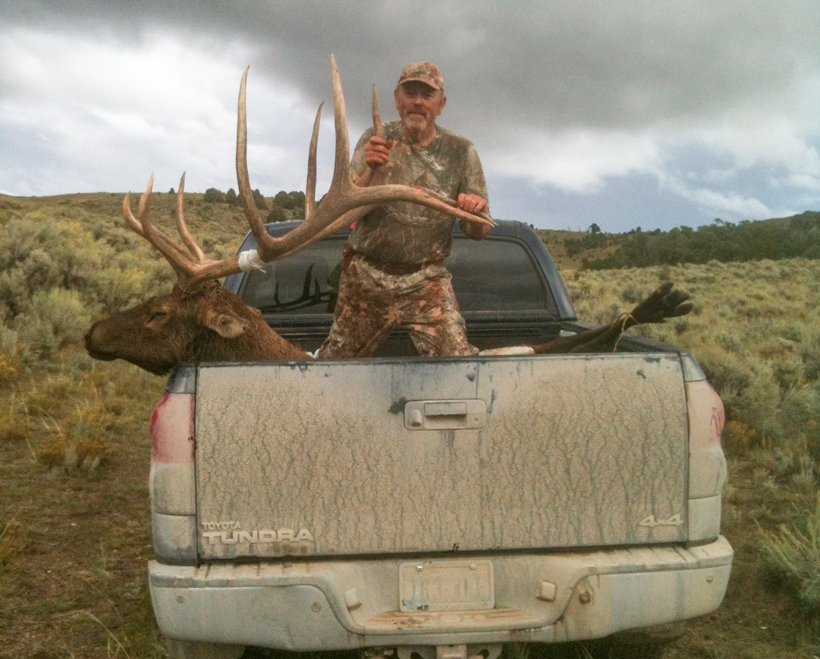 If they got to camp and still wanted to help I surely would accept it. I knew that I had eight to 10 hours of work ahead of me and there was another storm coming in. I did not have the first quarter skinned when I heard ATVs coming up the mountain. The cavalry had arrived. 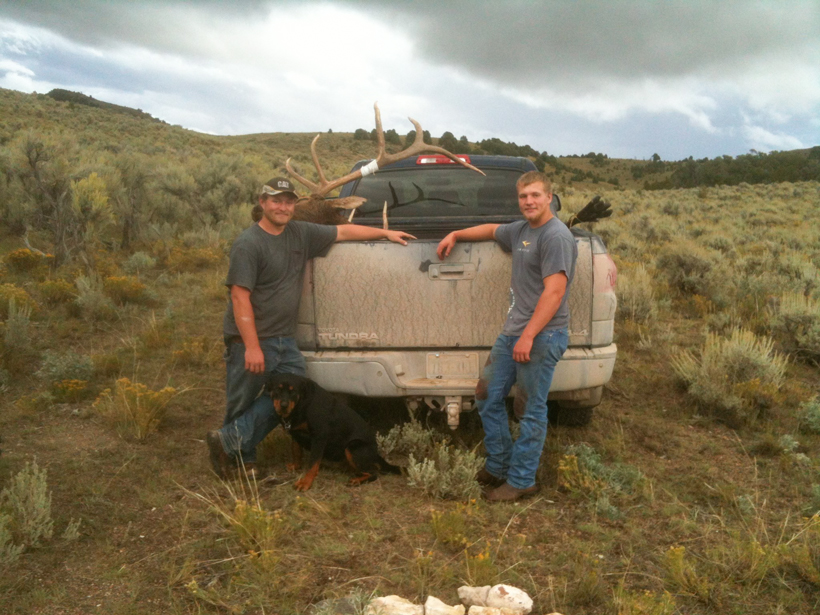 They helped with the process and then loaded the elk quarters onto the ATV. The only way Jeremy could operate the ATV was to stand on the left side platform and drive it down the hill. In 45 minutes from the time they got to the elk, we had the bull in my truck. God sent those boys to help this old man when he needed it.

I hit my custom message button on my SPOT locater and let all my friends and family know that I had accomplished my goal. I really like that button! 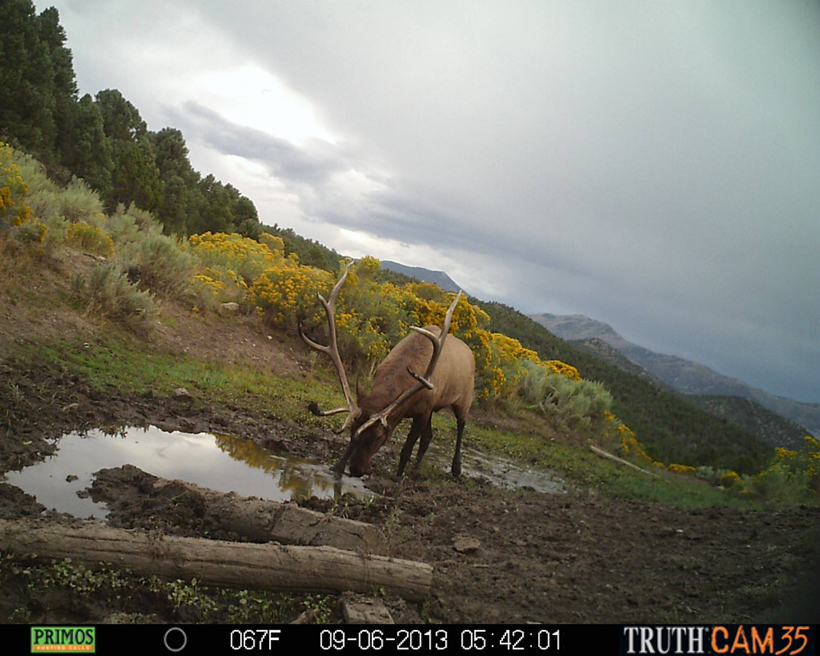 I realized after we took the pictures that this was the five point bull I had pictures of from the pond trail camera -- five days ago. His G-3’s were 24” and he gross scored just over 325” and netted 319 inches. Incredible as it may seem, in my 21 days hunting this area, I never saw another bowhunter. 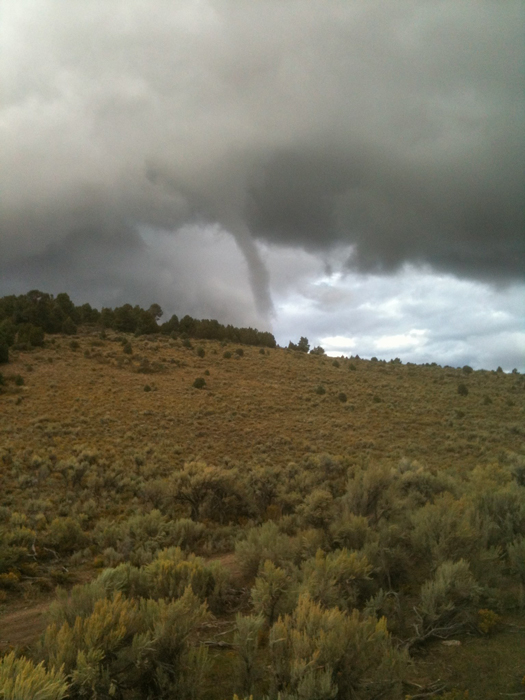 I got back to camp and it started pouring. I set up a tarp from the front of my truck bed to the trees behind it. I spent the next three hours under that tarp, with a lantern and on my knees, skinning the bull. I had to get him cooled down. 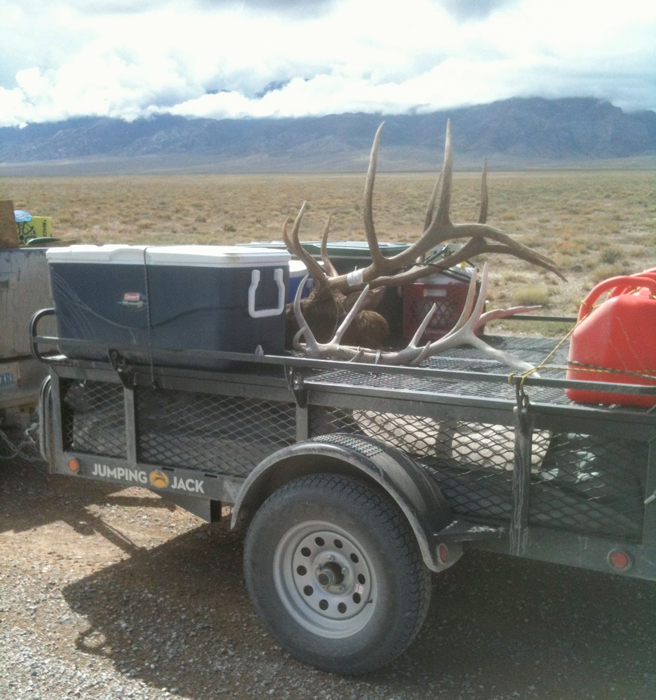 The next morning I finished processing the bull, packed up camp and headed home. 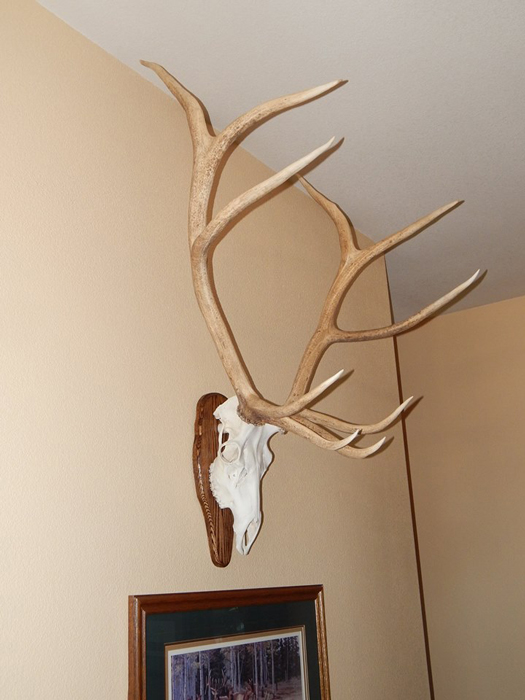 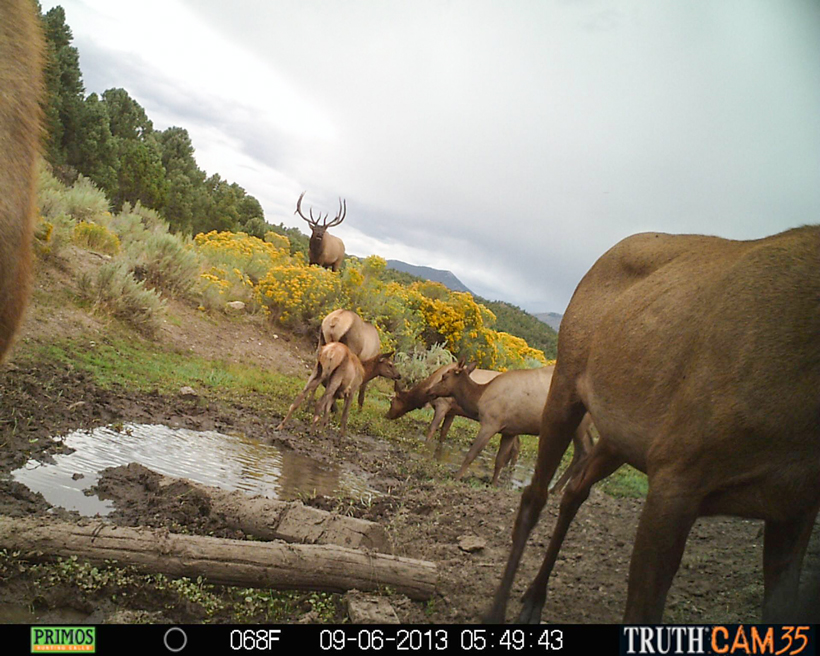 A parting picture of my bull elk talking to his girls. I had been in the field for 21 days by myself. At 63 years old and, yeah, I still got it! I love bowhunting!