Africa: The journey of a lifetime 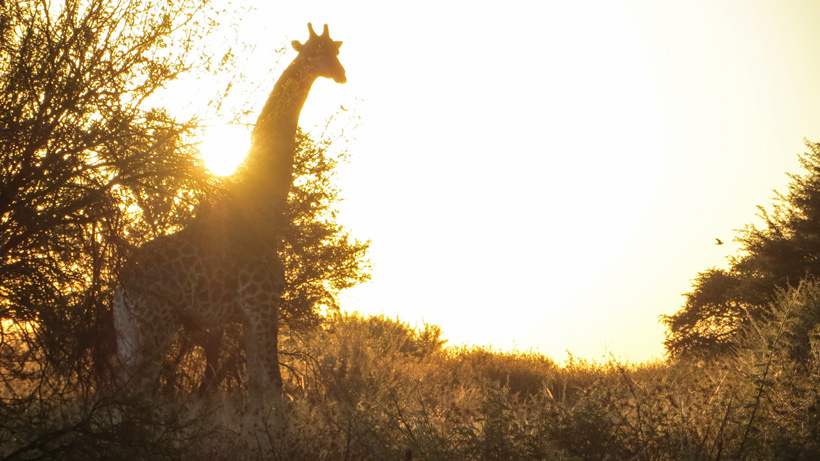 Africa was a journey I’d long been waiting for and, by far, the most cherished and inspiring adventure I’ve ever taken. For years, my father and I talked of making the long trip to Africa together. By long, I mean a five hour flight, followed by a 15-hour flight, followed by another flight just under two hours. Not to mention, a long drive to and from the airport. Surprisingly enough, the flights weren’t as bad as I expected, especially with a tremendous amount of anticipation fueling my body.

After years patiently waiting for school conflicts to no longer be an issue, we embarked on an unforgettable trip of a lifetime for this amazing off-season opportunity type hunt. All my life, I have been gratefully fortunate to experience the most amazing hunting trips with my best friend and father. I have always cherished the epic and wonderful memories we have made while hunting. I have learned the importance not only of introducing young generations into the hunting industry, but also how special it is to be able to spend time with loved ones while also spending time in the outdoors. 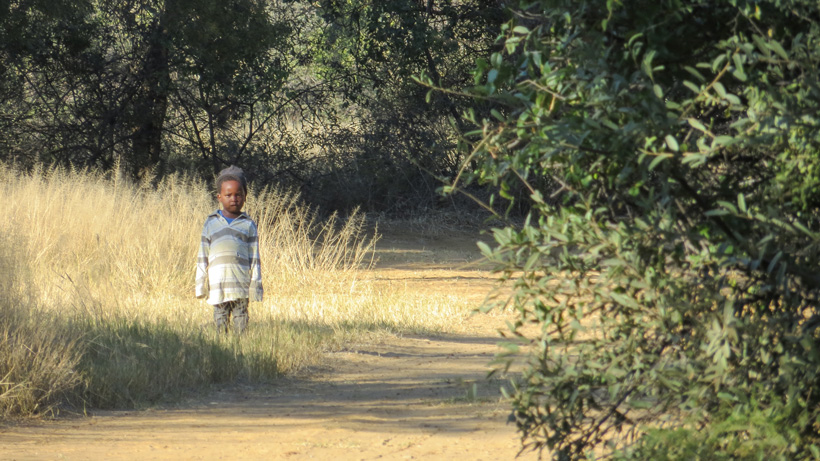 After settling into our truly breathtaking home of two weeks, we enjoyed catching up with our African friends. The next morning, we set to begin our hunt. I received a fully donated hunt that consisted of a variety of smaller class African animal species. 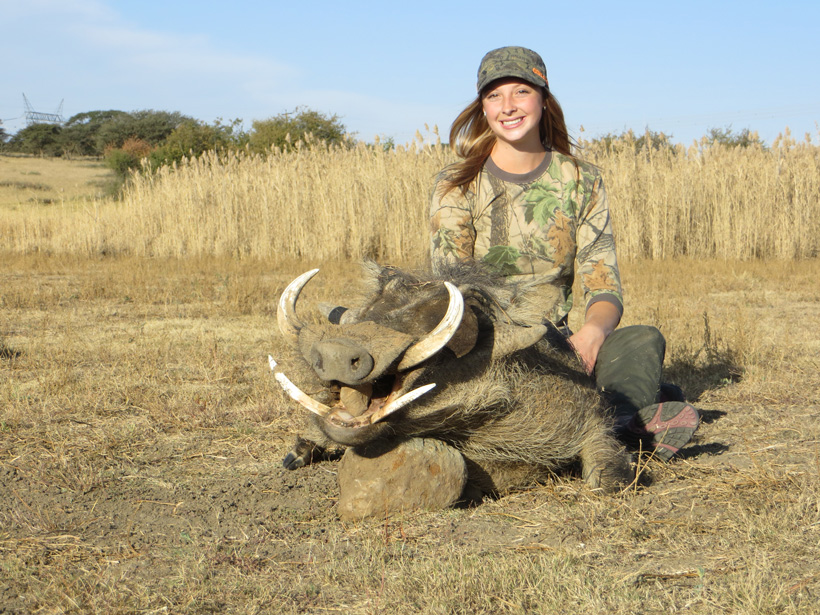 We set out in hopes of harvesting an impala, but instead got the opportunity at a huge hog rooting around in the open, absolutely unconcerned by our presence. An impressive shot rewarded me with my first African trophy covered in cockleburs. 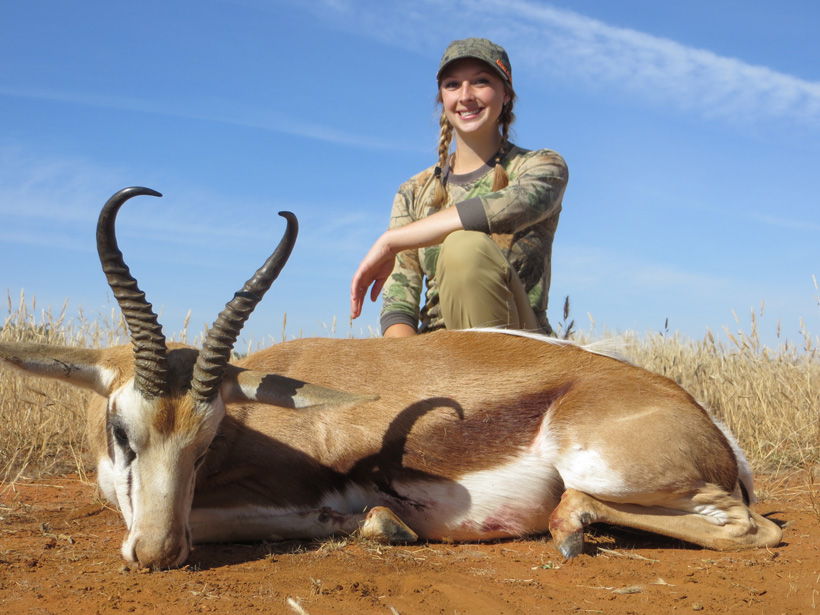 The following day we pursued a springbok. I always admired their markings and was very anxious for this hunt. After about an hour of stalking a group of springbok through the African prairie, I got a shot off of my shooting stick at the perfect springbok, who had fallen a bit behind the group. I was instructed to be ready for shot number two, because springbok are known for dropping after shot one and bouncing back up unexpectedly. After shot one; however, there was no need for another one. When we approached my beautiful trophy one of our African guides told me to smell the white hair that sticks up at the back of the springbok. To my surprise, it smelled of the sweetest scent — almost like cotton candy, which was actually the sticky scent gland that is displayed when they’re jumping. 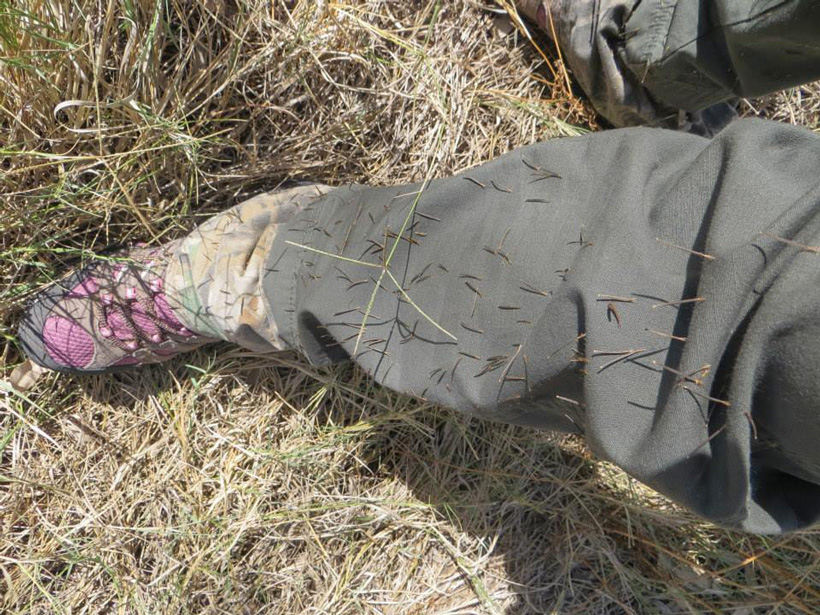 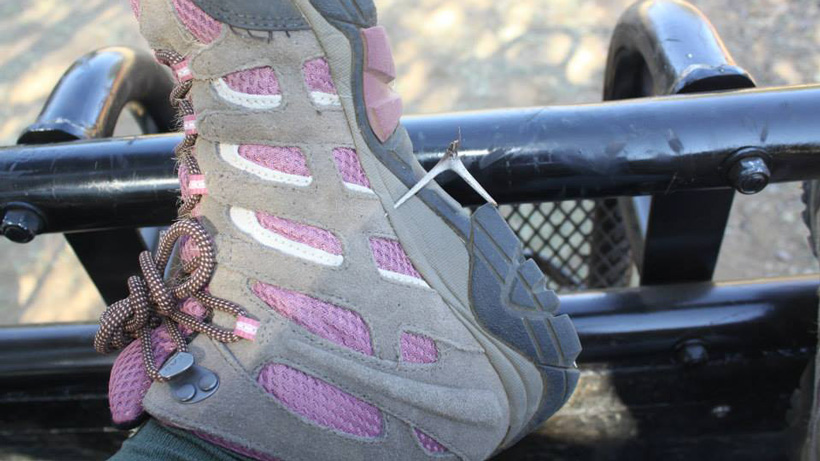 After this hunt, I sat for hours picking out small stickers I had acquired all over my shoes and pants from the grass of the prairie during our stalk, which I do not recommend. 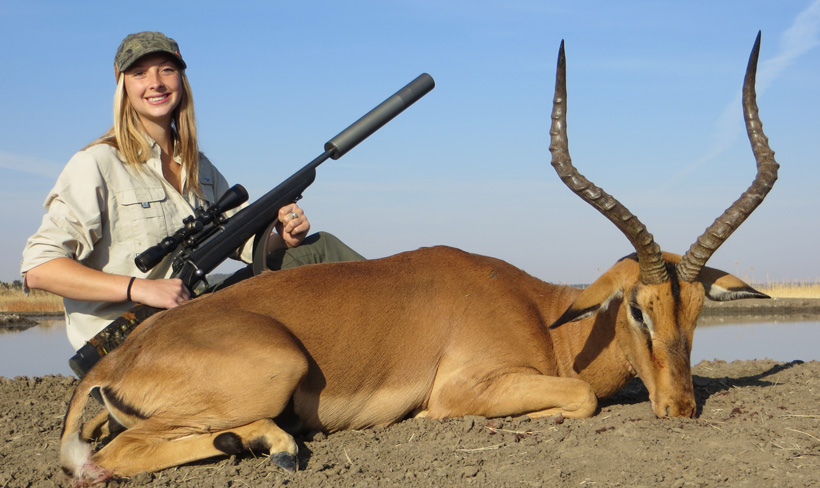 As we were driving through the prairie on day three in search of an impala to stalk, my father spotted a lone impala standing on the far side of a water hole with the sun in his eyes. At first, our guide and me only saw sandhill cranes standing near the water’s side and assumed this was what my father had mistaken the impala for. When we realized there was actually a buck there, I quickly propped my gun onto the sandbags and took a perfect shot that sent the impala cartwheeling into the brush. This hunt was quite the unexpected and heart racing experience. I was very proud to harvest an older, wise impala with plenty of life behind him. 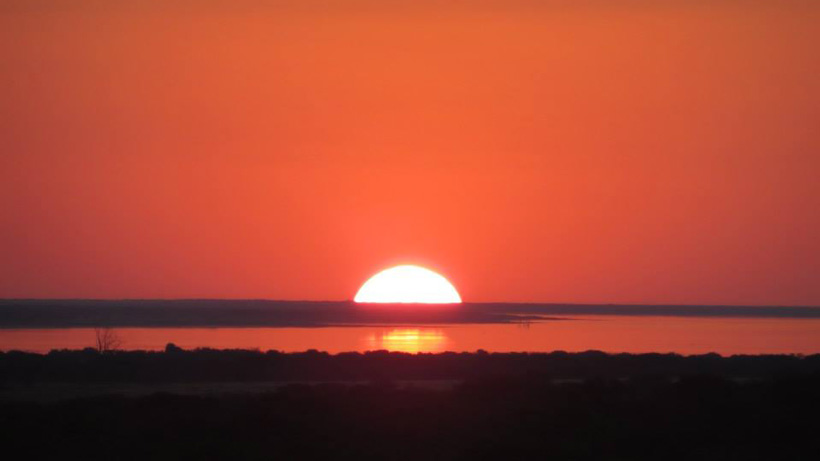 For the next few days, the entire team of friends came together to help our buddy harvest his cape buffalo. This was by far an experience that I will long remember in vivid detail. 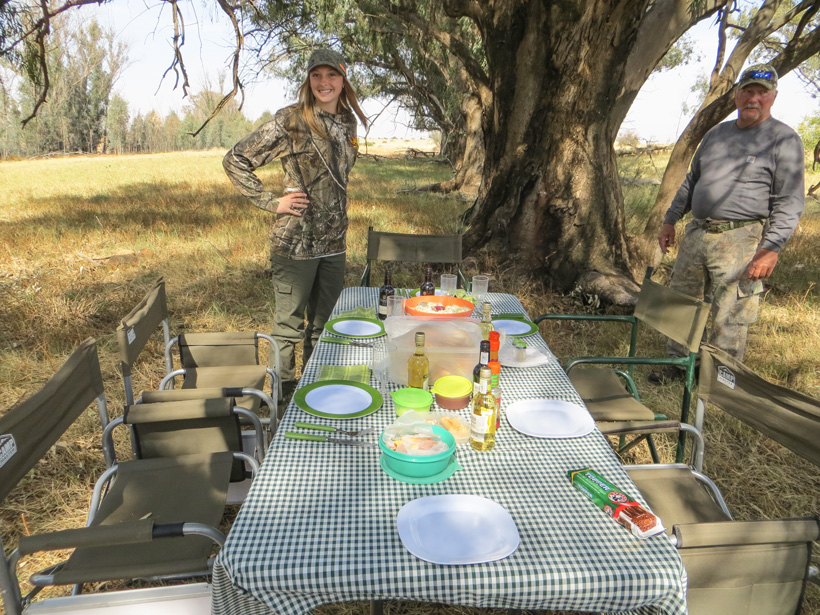 I not only witnessed the most amazing hunt, but I enjoyed lunch on an actual table with wonderful food, chairs, plates, cups and wine in the middle of a beautiful field under enormous eucalyptus trees, it was truly incredible.

I have never seen an animal so “colossal” as our African friend put it in my life. The buffalo live in the most extravagant, tall, thick and scary reeds. The paths they trailed through them resembled a corn maze. The reeds towered over ten feet above me when I stood next to them. The buffalo would disappear into the reeds like ghosts and gave off a very eerie feeling when they presented themselves in the open, which was a very rare sight. 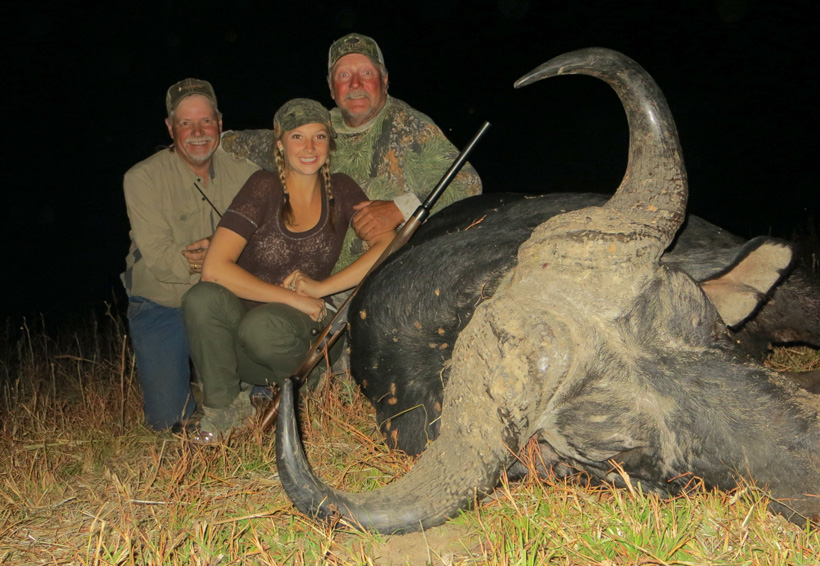 On the third day, just as we were all getting a bit discouraged and hopeless, our buddy was given his opportunity. It was getting dark and we were about to call it a night and head home. We were in separate vehicles on both sides of the reeds hoping to catch where the buffalo might come out when all of the sudden we heard a shot, then another and another. We took off through the grass towards the rest of the group where we saw an absolutely, unbelievably amazing trophy creature successfully harvested. The celebration began as did the long hours of hard work. It took nine men and a winch to load this extraordinary animal into the tiniest trailer I have ever seen. It was incredible. I am so thankful I was fortunate enough to experience a hunt that I will likely never have the opportunity to personally go on again. 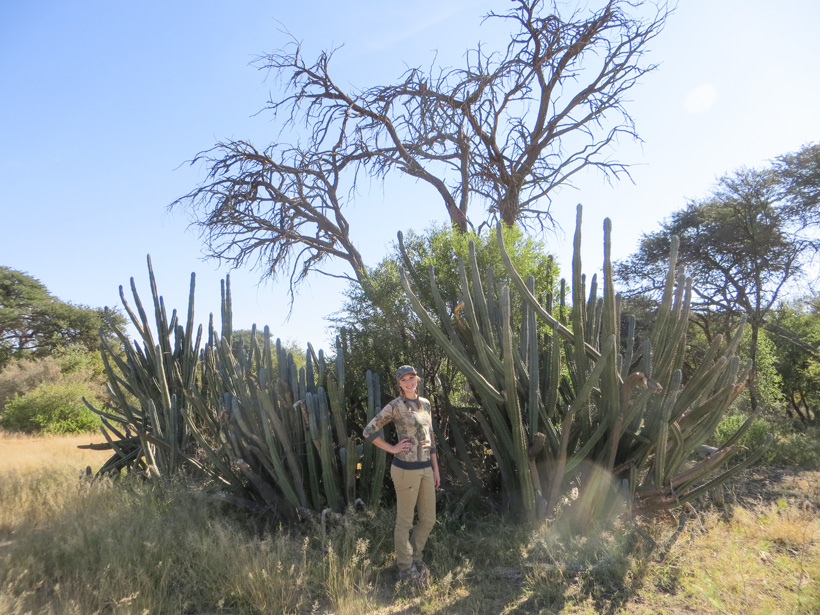 After all the excitement of buffalo hunting, we got back to business. Our guide had a wonderful spot where he used to hunt as a boy that he knew would hold some black wildebeest. My father and I snuck in line with the trees closer to the edge of the ridge that we were standing on top of. 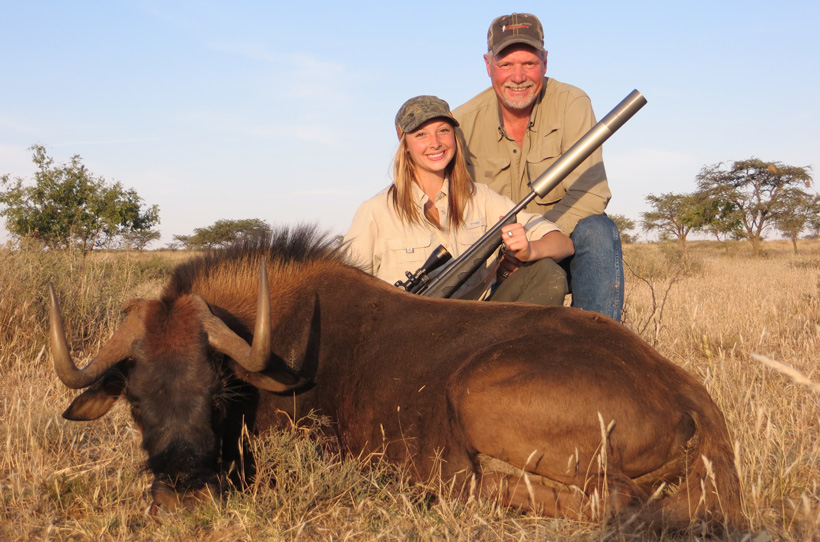 Exactly as expected, there were many wildebeest that were ranged at around 450 yards. I chose the closest wildebeest with no other animals surrounding her. I was able to take a steady shot off the shooting stick and harvested a beautiful wildebeest. It was the perfect end to our long day of hunting. 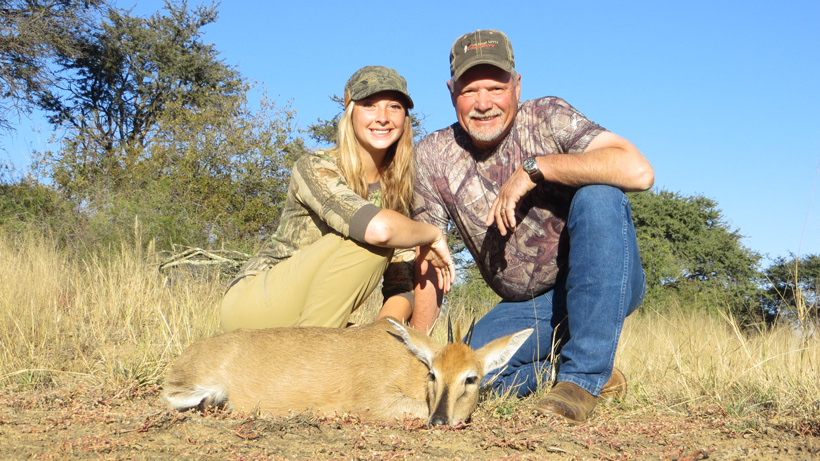 Many mornings, hours before our day would begin, my dad and I set out to walk the property where we were staying in search of a duiker. During the past couple days, we had tried for one with no success since they didn’t stick around long if they spotted us. On this occasion; however, we happened to get the sun just right and a duiker gave us just enough time to take a shot. I was thrilled to harvest such a tough, small and exotic animal on the hunt. These mornings also allowed my dad and I the chance to reflect on what a tremendous time we were having, which was quite a nice gift in itself. 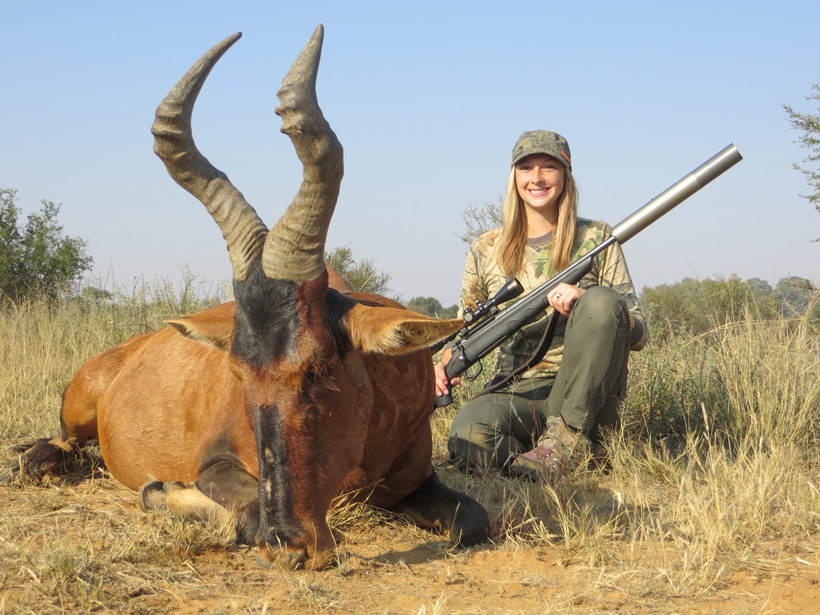 The last hunt we would embark on was the hartebeest. This animal was one of the oddest looking things that I have ever seen. Hartebeest have very long faces, small bodies and the most beautiful red hide. I love hunting the animals that don’t quite fit in so I was very excited about this hunt. It took quite some time searching through a large herd of hartebeest to find a decent sized trophy. Finally, the one we were anticipating separated himself from the group and gave me the perfect shot off the sandbags. It was the perfect hunt to conclude our African journey and one of the most beautiful, unique animals I have ever harvested. 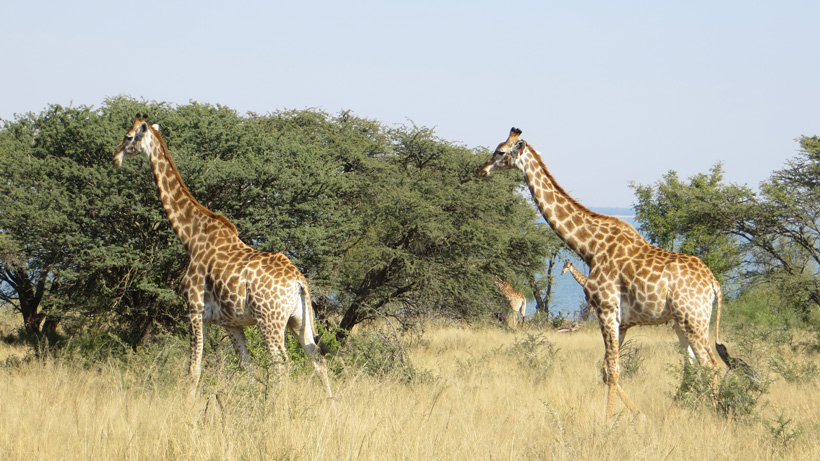 As our days drew to an end, we pursued many small game species, such as doves, squirrels and Guinea hens. We woke every morning to the most amazing coffee, intriguing breakfast of meat, cheese and bread, with the happiest smiles, excited for what the day might hold. We ate extravagantly mouthwatering meals and enjoyed wine with our most cherished African friends. Not a day goes by that I don’t think back to our African trip. I can’t express enough how grateful I am to have been given the opportunity to travel and hunt with my father, especially on this occasion. It was a trip I cherish and will never forget and a place I soon hope to visit again.