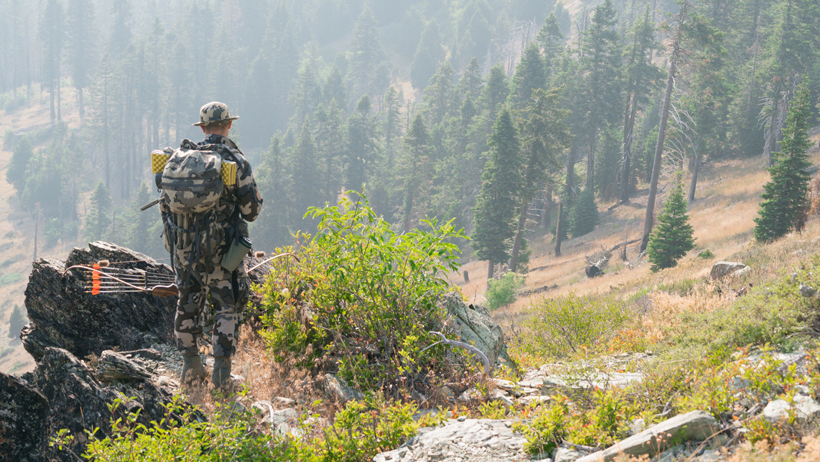 After last year’s success hunting with a stick bow, I was determined to prove to myself that it wasn’t just a fluke. Taking a Pope & Young blacktail with traditional archery equipment is no small feat, but anybody can get lucky once. I spent the offseason honing my shooting skills, studying maps and, finally, putting boots on the ground prior to the season.

I was able to find a few great bucks in the high country, but one, in particular, captured my attention. He wasn’t the biggest buck I found, but he was, in my estimation, the most killable. I was able to pattern this big 3 point as he went to and from timber each morning and evening and developed a game plan to intercept him opening morning. 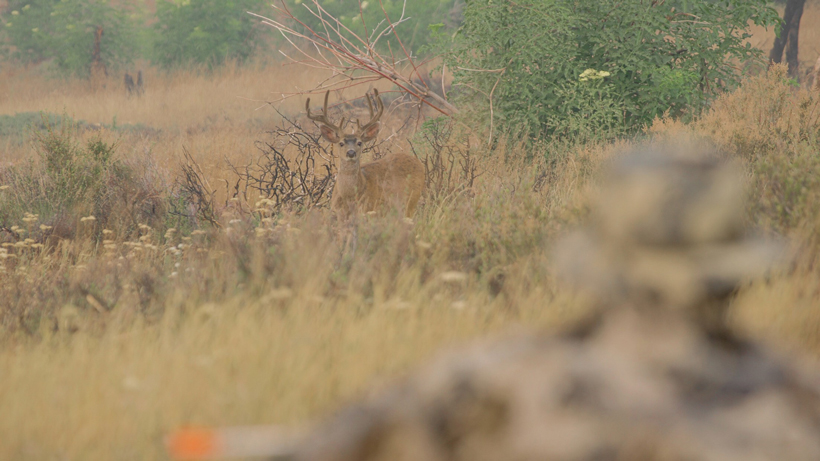 When the season finally arrived, I packed into my high country camp a day and a half early, eager to check up on the big three to ensure that he was still in his pattern. I set up to glass on Friday evening after setting up camp and scoured the area where I expected to see the big three.  Like clockwork, he emerged from the timber and started feeding on the ridge below. I watched him until it got dark, then snuck out and headed for camp. That evening I went through all of my gear and double-checked everything in anticipation of opening day. I discussed my plans with my hunting partners over dinner and turned in for a restless night of sleep.

I awoke early the next morning and started hiking to ensure that we would be in position well before sunrise. My brother-in-law, Jason, came along to film. We eased into our ambush location at the edge of the timber and got set up; Jason stayed 30 yards behind me in order to capture the whole ordeal. Assuming everything would go according to plan, the buck would use a trail 20 yards below me, presenting a very doable shot. I was set up in shin-high brush on a steep slope with a small rock outcropping to break up my silhouette. The summer morning was crisp with a steady breeze coming up the ridge in my face, the sky hazy with smoke. As the sun started to rise so did my anticipation, knowing it would still be an hour or more before the buck made his way to the timber. I focused on calming my nerves, reminding myself to breathe and to pick a spot.

It was almost 7 a.m. when I spotted movement below me: a doe and spike. These were the same deer that I saw with the big three prior to the season; he had to be with them. The only problem was that they were using a different trail, lower on the ridge and about 40 yards away. Wanting a closer opportunity with the stick bow, I knew I had to close the gap. When they fed behind some brush, the last piece of cover before they hit the timber, I slipped off my boots and inched forward down the steep slope, my focus on the area they appeared in. I made it 10 yards before I saw velvet antler tips coming toward me. With nothing but low shrubs for cover, I froze in a catcher’s stance, arrow nocked and bow at the ready, hoping the buck would take the higher trail I was accustomed to him using. 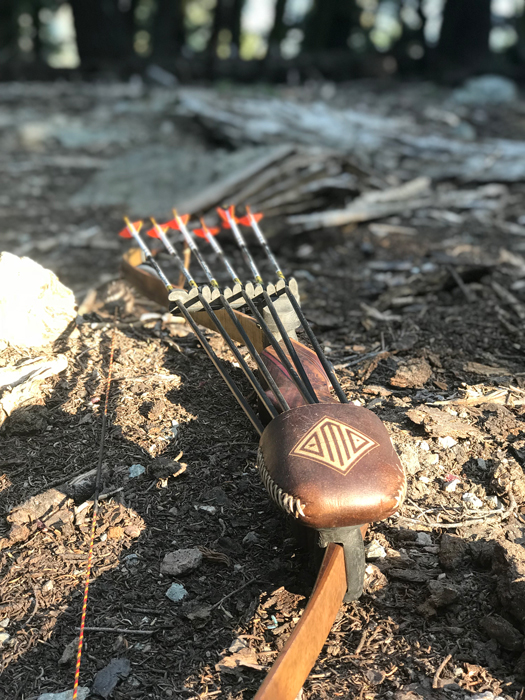 The big three followed the doe’s tracks at a leisurely pace, feeding along the way. I planned to move in a little closer when he went behind that last piece of cover, but he fed in front of it 30 yards away with nothing but open ground between us. He put his head down and I made the slightest movement to align my body for a shot and his head shot up and he stared a hole through me. I froze in a squat, trying not to make eye contact as he stared for minutes that seemed like hours, my quads screamed for relief. Finally, he put his head down.

This was it… pick a spot. I stood and drew simultaneously. The buck lifted his head at me again, but the arrow was on its way. I watched the arrow flight in what seemed like slow motion. I anticipated the “thunk” sound as it was in perfect alignment behind his shoulder, but the arrow kept sailing—right over his back.

“Crack!” The arrow hit the rocks behind him and he was gone.

I stood in disbelief at what had just transpired as the buck bounded into the timber, stopping around 100 yards and blowing as if to say, “What the heck was that?” He quickly trotted off, disappearing into the tangle of deadfall and old growth. Frustrated and dejected, I threw my hat on the ground and sat down, burying my face in my hands. After a brief pity party, I turned and looked to Jason

“That was awesome!” he replied.

Sure, I missed a great buck and, believe me, I would much rather have connected on that shot, but Jason had a valid point. The entire experience was a thrill. Even the impromptu stalk added drama to the whole event. We did everything right—other than executing the shot. It was incredible to be on the ground so close to that buck for so long. It reminded me why I work so hard year-round to create such opportunities. Jason’s comment snapped me out of my self-loathing and pity after the miss and reminded me how much fun this is. The pity party was over, and I learned so much from the experience. Though 30 yards is my self imposed cap with the recurve, I still managed to shoot over the buck. The downhill angle was steeper than I estimated, which caused the miss.

Jason and I spent the next four days hunting hard. We found several other bucks and even attempted a couple more stalks, though none as fruitful as the first. I’d love to say that this story ends with a heavy pack and a velvet rack, but it doesn’t. We did, however, thoroughly enjoy the rest of our trip. With a little help from Jason, I made a decision shortly after that miss not to dwell on it. I refused to think, “I could have killed him with my compound,” as I’m committed to making the traditional archery thing work.

When I first started hunting with a stick, I knew that there would be missed opportunities and limited range. In many ways, this challenge is what drew me to hunting with traditional equipment. Sure, with a compound, I may have been able to kill the buck when he stepped out at 40 yards, but I would have missed out on that intense stalk and stare down. I would have missed the nearly 10 minutes of watching the buck from inside his bubble and I would have missed out on the many lessons I learned from this encounter. The amount of work I put into making this archery season success did not pay out with a notched tag, but it was still successful in many ways, including motivation to work even harder in the offseason to come— specifically practicing more steep angle shots! Failure is inevitable in hunting, but how you choose to react to it is entirely up to you.