A humble hunter in the spectacular backcountry 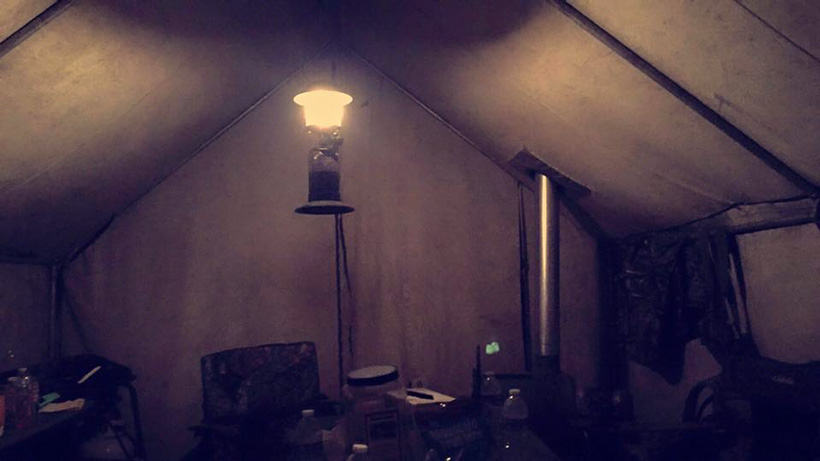 I awoke to a lightning strike that seemed to have hit mere feet above our wall tent, which served as our only protection from the harsh winds, bitter cold, and pouring rain. It was the middle of the night and the canvas tent slapped the aluminum frame near my head. My heart began to race as I debated on whether or not to call out for my father, who was sleeping about five feet away from me.

Instead, I repositioned myself deeper into my 30-degree sleeping bag and pulled it over my head. My sleeping bag was impenetrable. At least, that’s what I told myself in order to fall back asleep. It was my third day in Colorado on the hunt of a lifetime in a place so inaccessible that when it rained, the unmaintained native roads turn to gumbo.

I’ve been hunting since I was 12 years old. I have harvested one elk, four deer, a moose, and a bear in Washington state. Before I became a hunter, I remember late nights cutting meat with my father when I was very young. Even before that I can remember looking through binoculars with one eye (they were far too big for me) and the inevitable naps that accompanied riding around on logging roads in the “high country” that surrounds Western Washington. 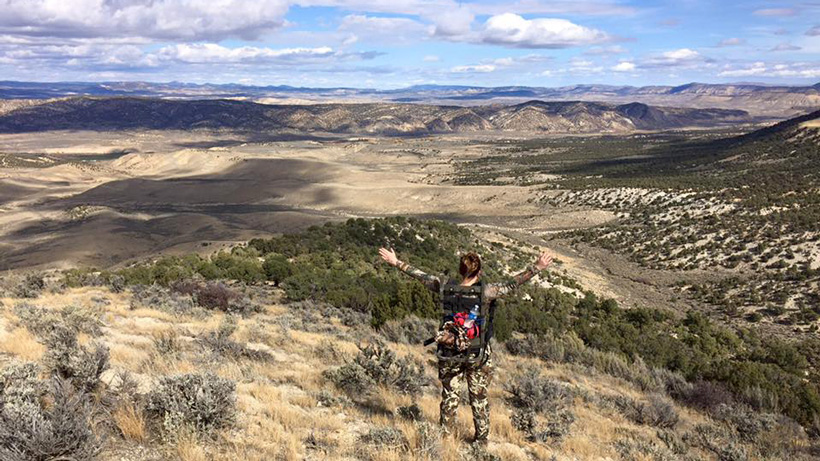 Following the near apocalyptic storm, the days that followed in the wild Colorado backcountry became more routine and serene. 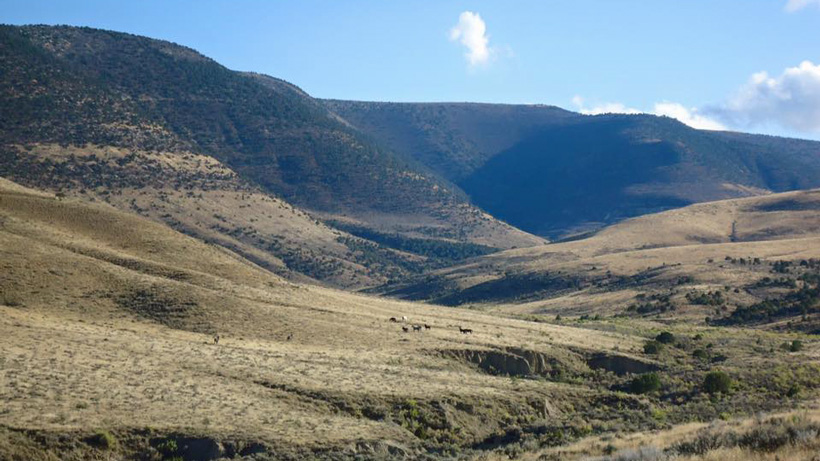 The wild horses with their coarse coats were an excellent representation of nature. Their hair was matted. Their bodies marked with bright gray scars. Some were missing their ears. But they were alive, without the help of doting owners or a veterinarian. 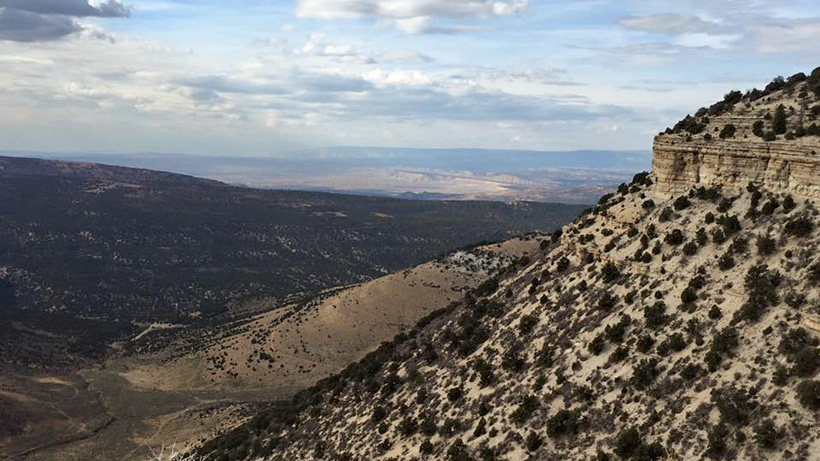 To me, hunting is what nature intended, what humans have done since the beginning of time in order to survive.

Anyone can go to a grocery store and buy meat. But what’s actually in it? There is nothing like harvesting an animal; organic meat that does not know the terror of feed lots or inhumane treatment by humans. The animals that I harvest for the most part don’t even know what humans are.

I am willing to partake in the raw, unfiltered wild that is the spectacular backcountry of America, because of the quality harvest as well as tradition. It makes me confident in my own self reliance. It is what I have been taught and what I have learned that I am most grateful for. 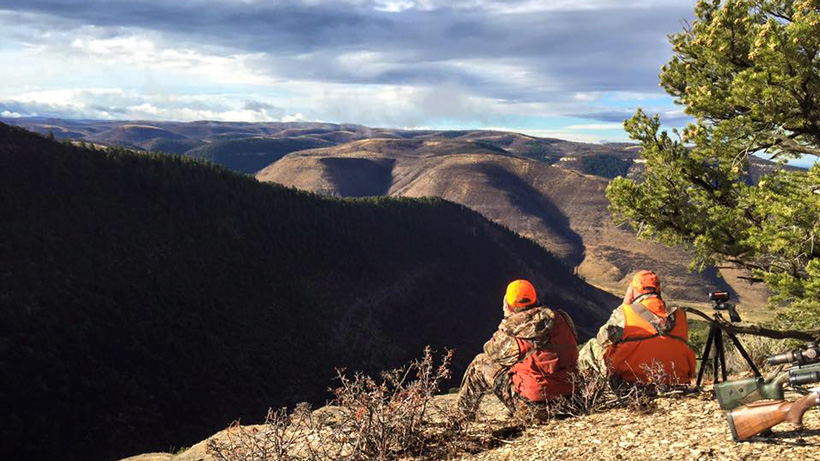 After days without success and three days before the end of our time in Colorado, we planned to re-try our unit’s cliff region. After driving at least an hour, we saw the ridge and valley, which within an eye’s distance, was covered in fog. We thought about driving to the next best spot, but that was located at the opposite side of the unit.

I went into auto pilot. 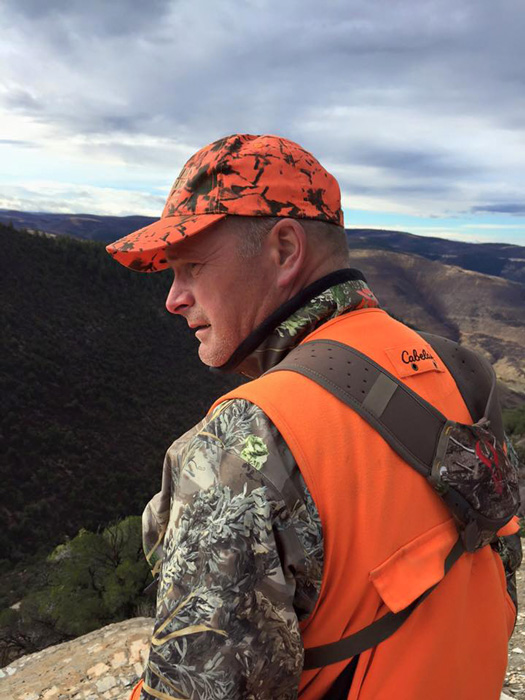 My father parked on the side of the road. Peering over my brother, I saw four bucks running away from us and up the other side of the ridge. I swung the truck door open, grabbed my rifle, jacked a round into the chamber and re-set the safety.

I began jogging and reached into my pants pocket to double-check the location of my hunting license and tag. We all began zigzagging down the mountain. My father and brother were ahead of me as I tried to ignore my left knee popping (a recurring sports injury from years ago). Finally, we all stopped. My father set out the bipod and a shot rang out!

My father's shot was perfect. A beautifully square racked buck dropped to the ground. We all smiled, cheering silently as my father handed the rifle to me. The deer in my sights had slowed, staring back at his fellows, confused as to why the other buck was just lying there.

My deer continued his way up the other side of the mountain. I laid down and tried to get ready for a shot in a pile of old frozen deer feces and dirt. My brother and I continued to bark out confirmations to one another until finally I was ready.

I took my father’s gun off of safety and experienced a moment of silence. It was so quiet that any following action seemed to come in slow motion. The last thing I remember hearing was my brother reminding me to aim a foot above him because in our run since leaving the truck, no one had grabbed a rangefinder. Our rifles were dead on at 400 yards, but this shot was farther. My father said to aim at a spot a body-width above the deer. So I did.

With the crosshairs on the spot above the deer’s shoulder, I released all tension in my face and looked through the scope. I reminded myself to take deep breaths. I released a final exhaled breath and within heart beats, the gun went off in my hands. The massive 4x4 buck dropped to the ground. He was down, but not entirely.

Time quickened once more and, as I looked through the scope, I saw the deer struggling. Desperate, I jacked another round into the chamber. My brother and father were saying I had hit the deer in the spine. His back legs didn’t work, and I saw him struggling, confused, and trying to stand up once again. But he couldn’t. I had made a shot that didn’t hit any vitals. I stood up and ran down the hill with my father’s gun in hand, laid down, aimed for his shoulder and fired. His head immediately fell to the ground. I felt strange after the shot in part because I took a crushing blow to the head, the entire repercussion of my father’s 7mm rifle hitting me in the bridge of the nose. But there was emotion, too.

My father said I stared at him, dazed. Tears began to wash down my face as the vibration in my nose had spread to my eye sockets and skull. Drops of blood rolled down my nose while my companions cheered. I looked again through the scope, and confirmed that my beautiful deer was down. I buried my head in my father’s arm and hugged him, his blaze orange vest wiping away both the tears and the blood.

After coming off the adrenaline high as well as the inconsolable pain in my nose, we began making our way down the ridge, through the flat of the valley and up the other side.

My father’s buck was our first stop. He was a stunning, aged, 2x4. Judging by his large body, grey face and the mass of his frame, it was safe to say he was an older buck.

We made our way up the hill where I saw my buck lying next to a downed charcoaled tree in the pale grass. I forgot the pain in my left knee, the blood pooling from my nose, and any sore muscle or joint in my body from the past rigor of hunting in such terrain. The buck was beautiful. The most beautiful animal I had ever seen. I sat next to him and immediately patted his beautiful coat.

I ran my fingers through the dense fur and stared into the different layers it held. I noticed everyone staring at me. I didn’t want to choke up and let the tears flow again so all I was able to mutter was, “I need a minute.” 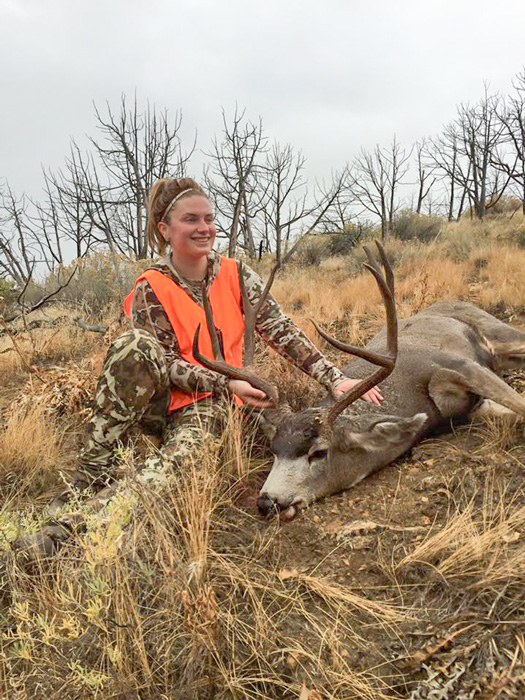 The tears happened regardless. I was ecstatic. I was holding the largest buck I had ever killed in a state I had never been to with a tag in my pocket that I had waited for 12 years to receive. A very humbling experience. 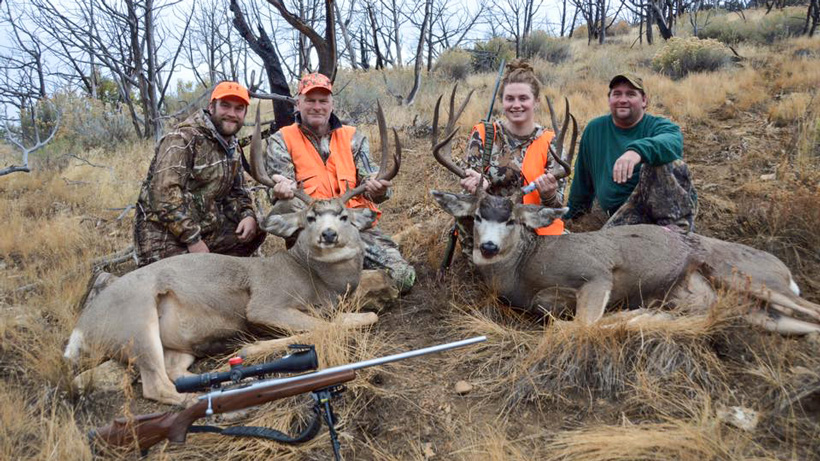 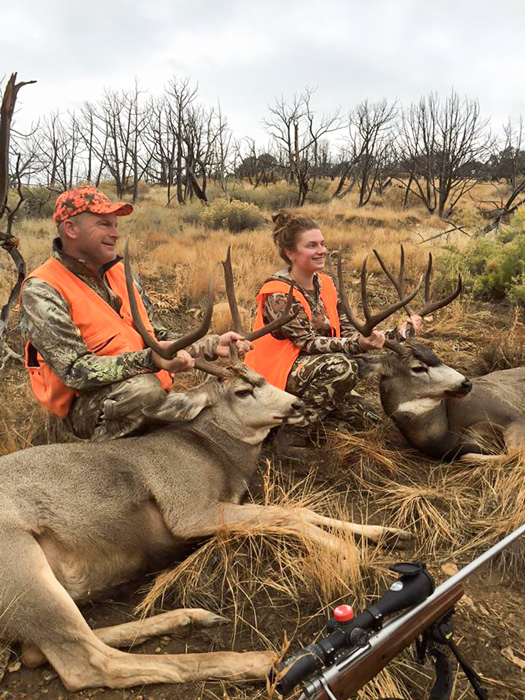 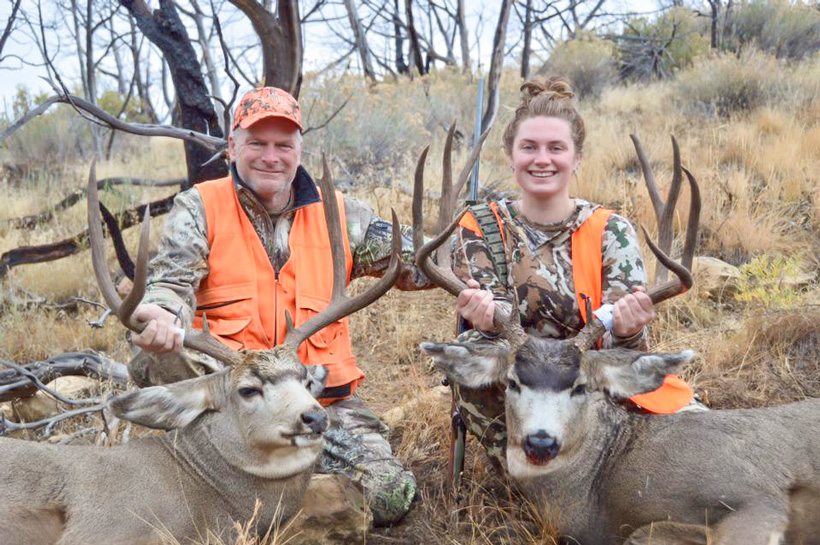 I’m not sure how long I marveled at the buck. I suppose it’s not important. With the help of my brother, we dragged my deer’s massive frame down the mountain and placed it next to my father’s deer. 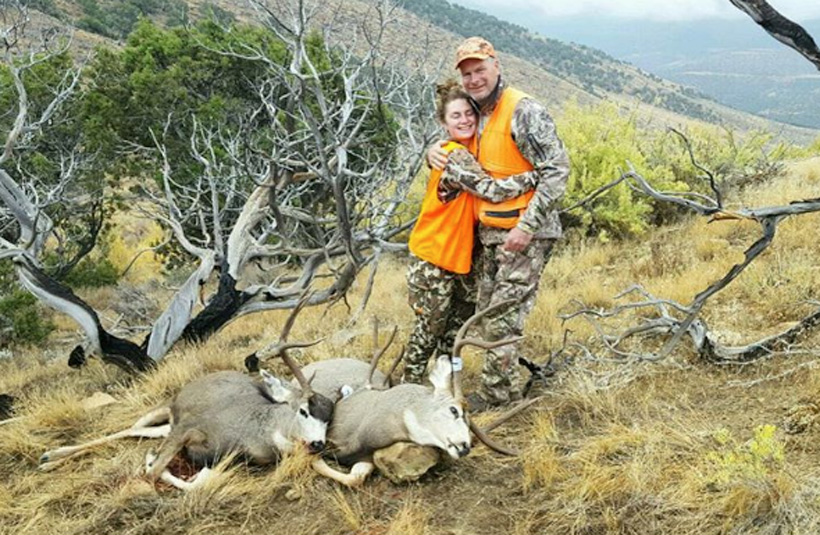 After gutting the deer, we began pulling both down the mountain.

I pulled my buck the entire way myself. I would stop, take in deep breaths of the high altitude (9,000’) air and pull with all my might.

We put the bucks in the back of the truck and began driving to the local meat shop (local meaning in Meeker, which was about an hour and a half away). I stared out the back window at my deer. I was proud, but above all grateful to have harvested such a deer. We arrived back at camp later in the day. We all sat back and passed around a celebratory bottle of Fireball whiskey. The taste had never burned so good.

The next morning, I sat in the cook tent in my long johns waiting for biscuits and gravy. My cell phone began to ring and I answered. My brother was out of breath. “Hand the phone to dad!” he ordered. My brother had shot his bull elk. 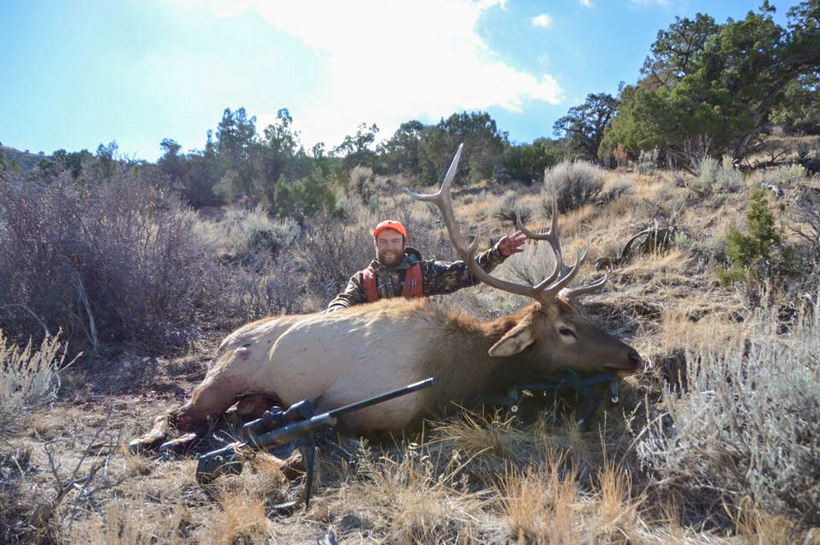 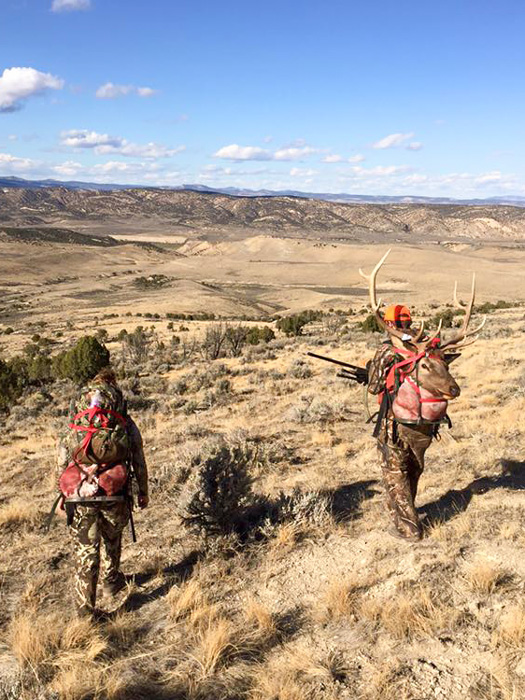 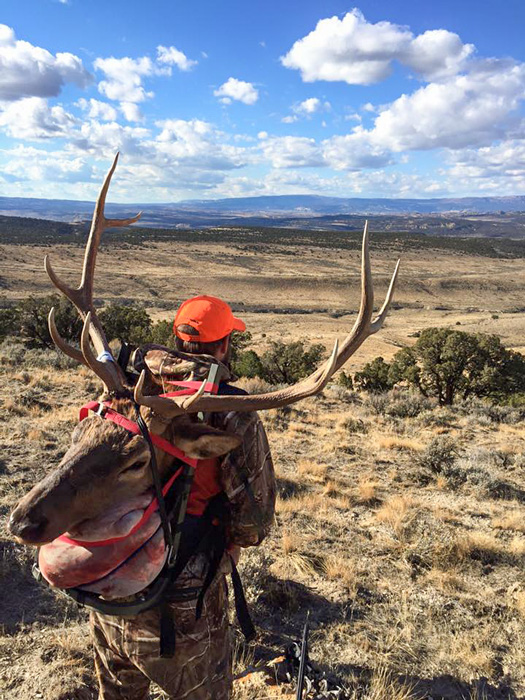 It took the four of us half the day to bone out the massive 5x5 bull and pack it out from the bottom of a canyon. 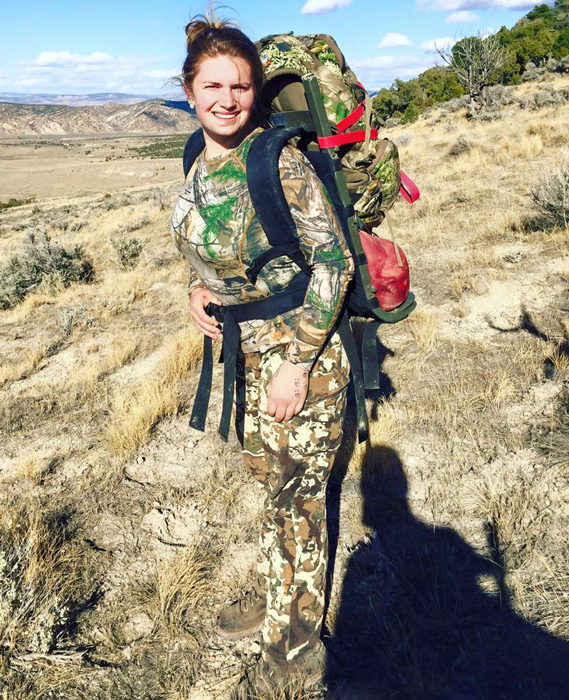 With 60 pounds on my back, I heeded my father’s warning to only make strong and secure steps.

Without hunting, man would have died before even scribbling on cave walls. My body was forged in the wilderness. From it I have grown into a self reliant and empowered young woman. I have looked up at mountains I viewed as impossible to climb, but I have also stood on top of those same mountains feeling the sensation of achievement flow through my exhausted limbs. I have grown to love and appreciate all the wild wonders of the natural world, from which I’ve logged the greatest hours of my life.

Even as a seasoned hunter, I know the pain of a bad shot on an animal and the humility that follows. Yet, I maintained my focus to fire once more, even when my vision was clouded with tears. I know what my deer felt because, after that first bullet pierced his hide, he became a part of me. 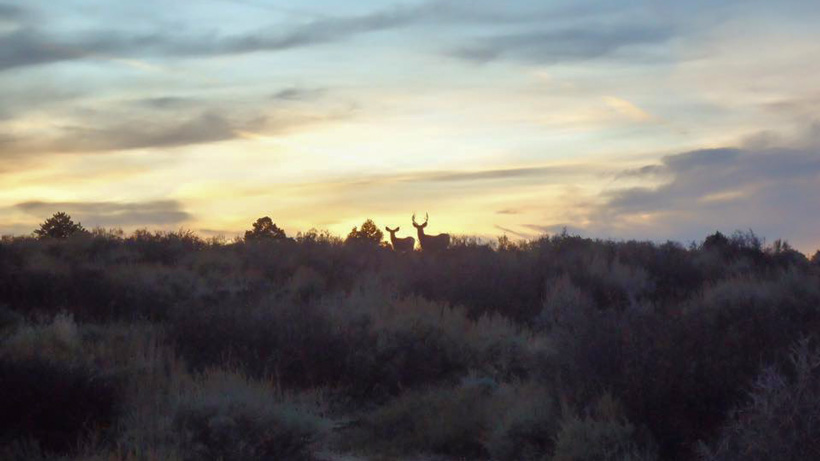 I know what it is to want to stop, take a break and rest, but that is only my body speaking and not my mind. It is the human spirit that does not break from fear. Instead, it surges, and continues in wake of the impossible.