A first for everything 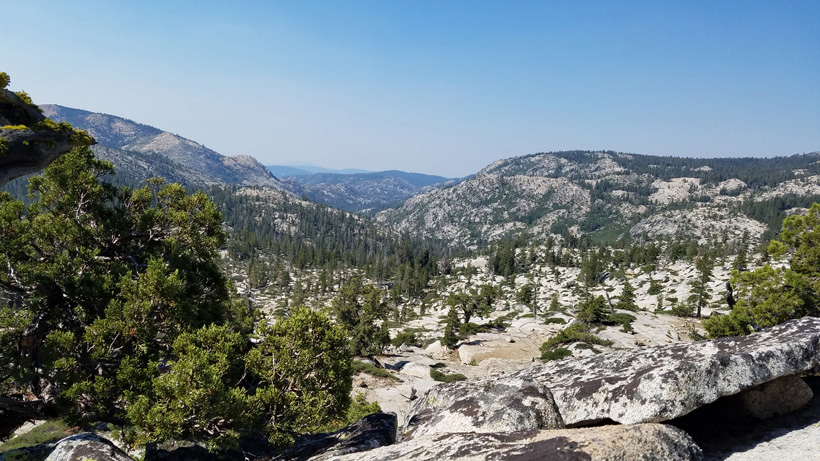 Archery hunting is not easy so when my good friend and coworker, Jonathan Boek, who had only hunted once before as a kid, told me he wanted to buy a bow and go deer hunting, I suggested maybe he should start with a rifle first. He was insistent, however, and bought a bow early in the summer to start practicing. Then, he thought it would be a good idea to get a bear tag, too, just in case. I loved his enthusiasm but had feasted on tag soup too many times to match his optimism. Since I didn’t have a bow, I agreed to go along as a spotter and to hopefully help pack out a deer if he shot one.

The opening weekend finally rolled around and we headed up the highway into the rugged Sierra Nevada mountain range of Northern California. We drove four miles on an old Jeep trail that was the roughest trail I had ever driven on. I kept praying we wouldn’t get stuck or break down and thought ahead anxiously to the idea of driving back again on the same trail.

I lost count of the times Jonathan had to jump out of the truck and guide me over treacherous rocks and ruts. Nevertheless, we made it to the trailhead unscathed. Smoke hung in the air from nearby wildfires and left a murky haze over what would have been a beautiful sunny September afternoon.

We backpacked two miles to a pristine mountain lake, surrounded by forest and granite outcroppings. Jonathan had used Google Earth to scan the surrounding areas and settled on this spot as the best option. Even if the hunt was unsuccessful, I was thrilled to spend the weekend in some of the most beautiful country there is! 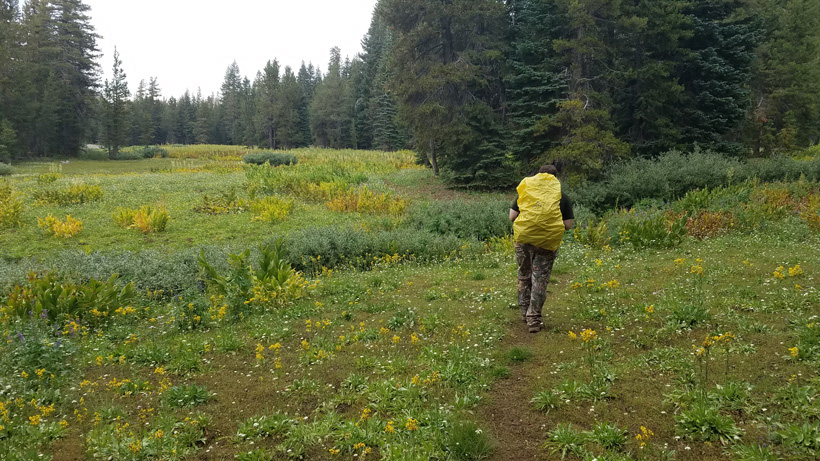 We set up camp between the lake and a granite ridge that overlooked a large basin to the west. In the bottom of the basin was a dense forest and we decided that would be our best bet for the next morning to start the hunt. With little faith in our stalking skills, the forest would allow us to set up in an area where the deer could come to us.

We were up before the sun and 6:30 a.m. found us a mile further down the trail and posted up in a small clearing about 50 yards across. I set my hunting knife and bear spray on the rock in front of me. They did little to replace the comfort that my trusty Ruger .270 would have brought. Jonathan scanned the forest intensely, confident a deer or bear would come along shortly. Thirty minutes later we heard crunching sounds coming from a ways off. Having been fooled by squirrels dropping acorns from up high in the trees before, I figured this was a false alarm. It wasn’t. Peering through the forest, I saw the legs before I saw the body. Then, there he was! A massive bear! He was 50 yards away, but he was on my left and Jonathan was on my right. My heart was pounding in my chest and I began to worry about how Jonathan was doing. Nothing frightened me more than a wounded bear at close range. I slowly backed up with hopes of clearing the way for a shot, but I stepped on a twig and the bear was gone in a flash. We settled back in but saw nothing the rest of the day other than a faint glimpse of a deer through the trees. 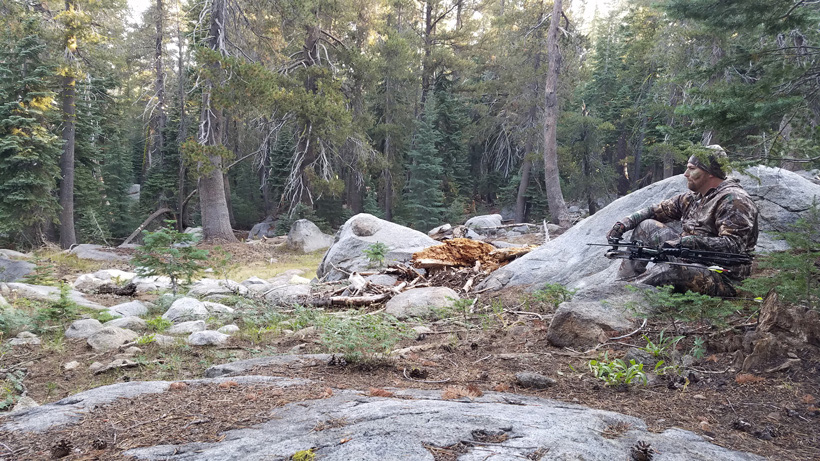 The next morning we returned to the same clearing. Bear droppings were all around so we knew this was a hot spot. Fifteen minutes after settling in we started to hear the crunching sounds again! This time, though, the sounds were coming from behind us on the other side of some small saplings. All of a sudden, a bear stepped into the clearing 25 yards from Jonathan! He walked forward but stopped behind a large boulder. This gave Jonathan the perfect opportunity to draw his bow. I grabbed my phone and started filming. My heart was pounding in my chest and I could only hope that Jonathan would be able to hold steady. He held his draw, waiting for the bear to move. Ten seconds passed, then twenty, then thirty. After 40 seconds, the bear turned around and re-appeared where he was before. The arrow struck home. The bear snarled and spun around before charging down the hill at full speed, moving about 20 yards away from us. We listened intently as the crashing faded down the hill, our eyes wild with excitement and intensity.

We found the arrow lying on the ground where it had passed through cleanly. The shot was good, but a little farther back than it should have been. Was it enough? We could only hope. We waited a while before starting to look for blood. Neither of us had ever tracked a wounded animal before. We proceeded with great caution, sobered by the thought of an angry bear ready to take his revenge. Sure enough, we found blood on the side of the rocks, then some more. We found where the dirt was torn up from the claws as the bear charged down the hill. 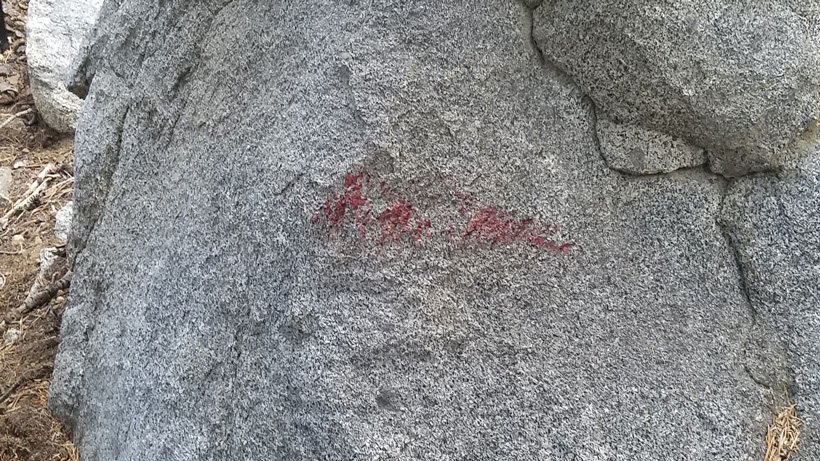 We advanced slowly and closely surveyed the area. After topping out on a small knoll and looking down the slope, we spotted him lying where he died. He was smaller than the bear we saw the previous morning, but we were fine with that as we realized the real work was about to begin. Every hunter who has taken a big game animal is familiar with the emotions we felt. We found ourselves placed at the confluence of excitement and sadness, reward and respect, triumph and honor. We thanked the bear for giving us his life, then started peeling back the hide.

Neither of us had ever skinned and quartered an animal before. I had gutted a deer I shot a few years back, so at least I had a little knowledge. We had studied online tutorials about how to quarter an animal and tried to remember the key points as best we could. We finally made it through, but it took three and a half hours before we had loaded up our packs and were ready to start the three-mile trek up the mountain and to the truck. Each of us had two quarters and I also had the backstraps and burger meat. We stashed the hide for the second trip. 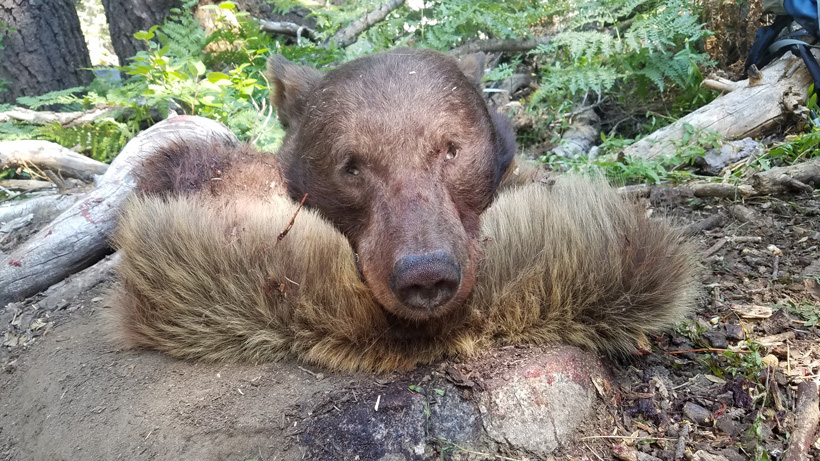 A light rain began to fall as we worked our way back to the truck. I had never carried such a heavy pack. We kept saying how glad we were that he didn’t shoot the larger bear on the first day. It was late in the afternoon when we arrived at the truck. We grabbed a quick snack before starting a fast walk to retrieve the hide and all our gear. I loaded all of my gear and Jonathan’s gear into my pack. He loaded the hide into his and we set off, trying to make it out before dark. However, darkness advanced quicker than we could walk and we finished the trek with headlamps at 10 p.m. Jonathan had shot the bear at 6:45 that morning and we had been working hard non-stop since then. Our muscles ached and we shook off our tiredness as we navigated the treacherous Jeep trail in the dark. Slowly, but surely, we picked our way down the mountain and hit the highway.

It doesn’t take long to forget the pain and struggle of the hunt. A few days later, we were excited for the next season to roll around! Back at home, we processed the meat ourselves and felt great satisfaction with each vacuum-sealed bag that started to stack up. Wintertime dinners of bear stew, bear chili, bear brats and bear burgers remind us of that thrilling weekend. I look back and smile at how skeptical I was. Not every hunt will be this exciting, but it was a good lesson to never let pessimism or discouragement get in your way. After all, you never know what’s over the next ridge.

P.S. When Jonathan got the skull back from the taxidermist we realized that this bear had been dealing with quite the toothache! Two of his large front teeth were snapped off. 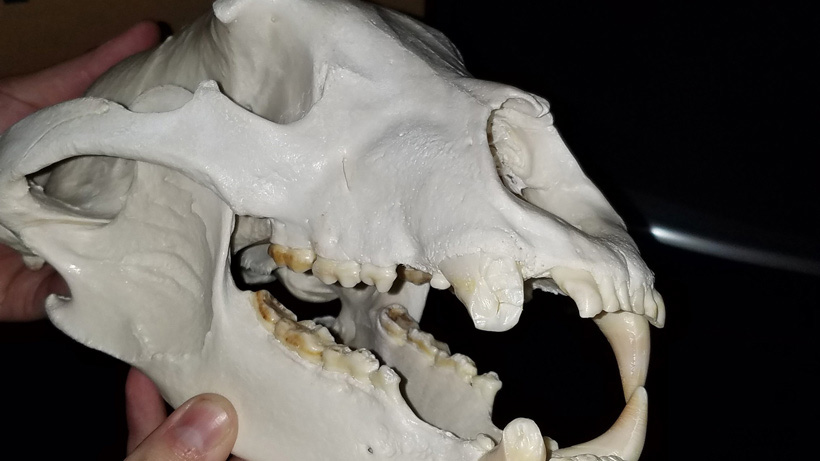