8 years of persistence leads to the bull of a lifetime 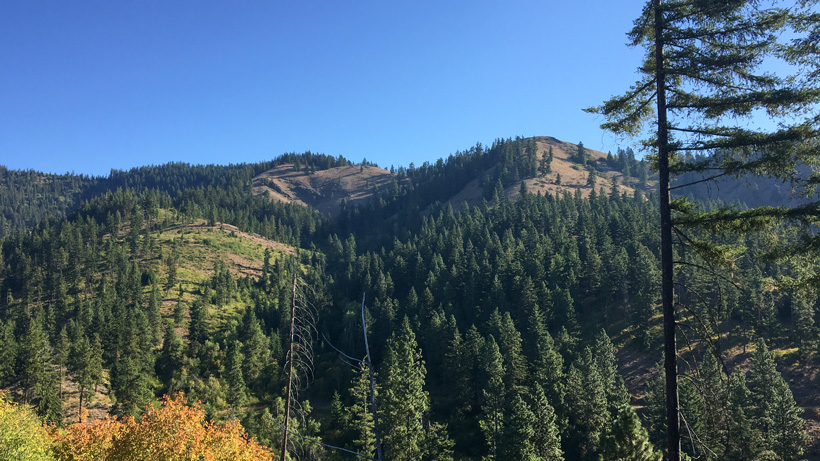 When I first picked up a bow seven years ago I knew I found my passion. For the past seven seasons, I have worked my tail off, trying to fill my elk and deer tags. Unfortunately, I have never been able to fill my tag. While it’s discouraging, I kept pushing forward, trying to shoot my first elk or deer. I knew this would be my year because last year I helped pack out two of my buddies’ deer and my father-in-law’s bull. I consulted my wife as to what draw I should put in for and she told me to put in for the hard to draw unit since I was already drawn for general season mule deer in Utah. I sure am glad I listened to her.

On June 10, 2016, I awoke at the firehouse just as I usually do. Typically, we get a cup of coffee and do a pass down of information to the oncoming crew in the morning, but this morning was different. I knew the Washington draw results would be announced so I checked them online. I scrolled through and saw I drew a cow tag; I could not have been happier. Then I continued scrolling and saw the words every hunter loves to see: selected! I was drawn for the coveted Teanaway quality archery bull tag. I immediately began to scream; the excitement I felt that day was almost as exciting as the days I got married and had kids. As the news sank in, I knew I had a lot of hard work in order to be successful.

Luckily, my wife used to hunt before we had kids so I knew she would be supportive of my days away scouting. I knew the Cle Elum area well, but didn’t know the access points to public land or, generally, where the elk tend to rut. For Father’s Day, my wife asked me what I wanted to do. I replied “Let's go scouting!” 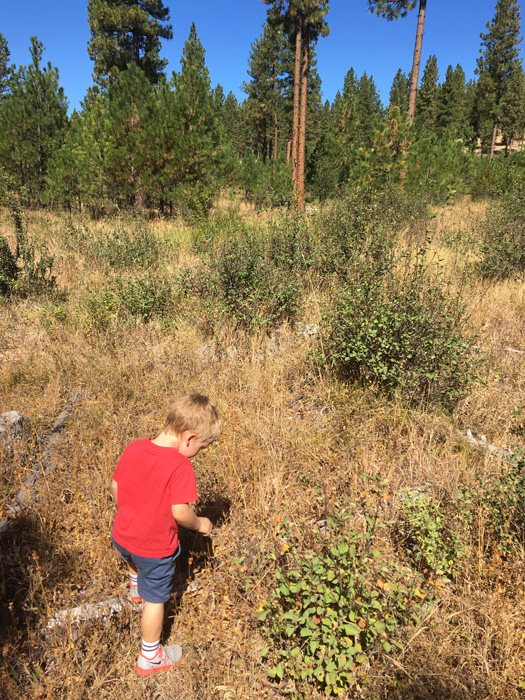 My father-in-law, who is also an avid hunter and my hunting partner for the past seven years, agreed: scouting would be our Father’s Day present. We loaded up my wife, three-year-old son, Brody, and seven-month-old daughter, Reese. Anyone who has kids that age knows what we did was crazy, taking a three-year-old and a seven-month-old in the truck for hours is bound to fail. We barely got any time to scout in, but it was still a lot of fun to think three months from then I could have my first elk on the ground. 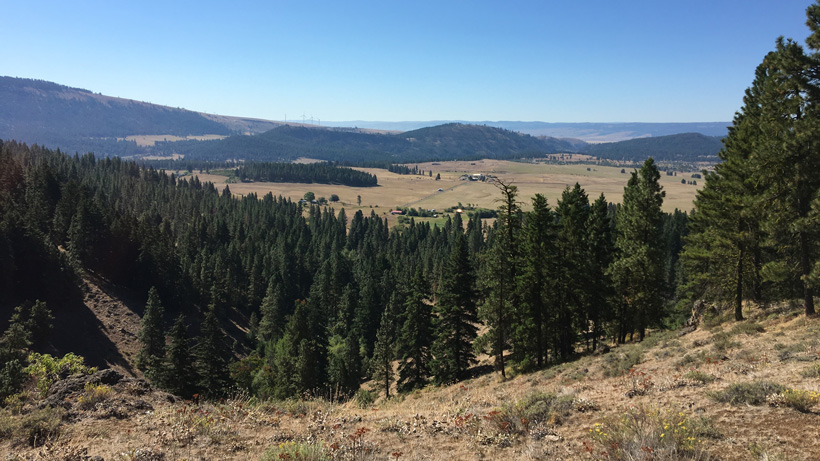 As I got to know the area better and made connections with locals, I knew if I wanted a big bull I would need private permission to access state land. There are access points without private permission that hold decent bulls, but if you want an opportunity at a 350” + bull you need permission. This became my new mission; I wrote multiple letters and knocked on as many doors as I could. I was lucky enough and secured three different properties that directly backed up to state land. The best way to gain an advantage was to get into these areas away from public access points — even if it required a lot of hard work. This meant there would be minimal pressure, which made it even more exciting to think I could be hunting alone with multiple bulls to choose from.

Of course, the first thing I needed to do was scout the unit. As a firefighter/paramedic, I work two days on with four days off. I am blessed in that I have the best job in the world, which also allows me ample time off to hunt. In July, during my four days off, on at least one of the days, Brody and I would head over to the unit to scout. The first time we scouted we saw elk, deer, turkey and grouse. He was so excited, especially when we were hiking and stumbled upon a deer or elk; he would whisper because “We were hunting.” Seeing my son so excited made me proud as a father because I really hope over the years we will generate great memories together in the woods.

While I continued to scout all summer, I could not seem to locate a bull. I felt at a loss; what was I doing wrong? I would put on miles and would get little in return; what I thought looked “elky” showed little to no sign. I vividly remember one solo hike I made in late July. There is an area I wanted to check out, which has a small swath of public land. I hiked all over the lower half of the land without seeing much sign, carrying a 50 lb block of selenium. My legs were tired from hiking earlier, not to mention it was 90 degrees, but I knew I could not leave until I got to the top of the mountain to look around. From the road to the top is only about a half of a mile with 1,000’ of elevation gain. I was motivated so up I went. I finally got to the top only to find nothing—not one track or pile of scat. My legs were dead, I was exhausted, my motivation left my body. 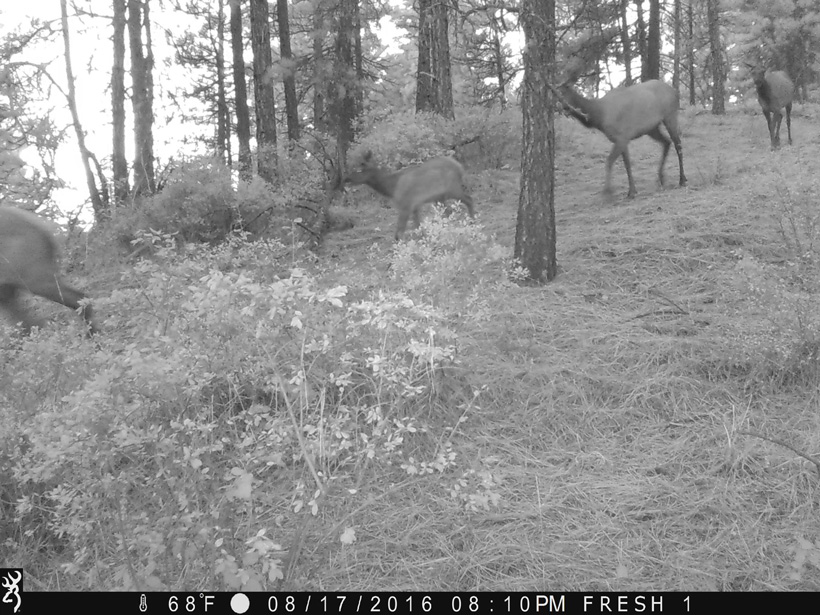 Yet, just as I began to lose hope at ever filling my first tag, things began to pick up. I decided I should go pick up some trail cameras; I couldn’t believe there were not any elk in the area. I set up my first camera on a finger coming off the ridge with heavy use. Finding this spot again and checking this trail camera gave me hope: there are elk! On the same day that I set up that camera, I did a five mile hike up mid-slope on the ridge and then side hilled to do a big circle. My coworker, Nick, was with me, scouting but also trying to tag out on a bear.

The area was covered in bear scat; maybe that’s why I was not seeing much sign. We ended up in some very thick country. I could feel the hair rise on the back of my neck a few times as we walked thanks to not being able to see in front of me and the amount of bear scat that was around.

As we were bushwhacking, Nick said, “Did you hear that?” Right after he said that, the bushes began to crash. It was my first bull sighting; I didn’t get a good look at his rack, but I was so excited! 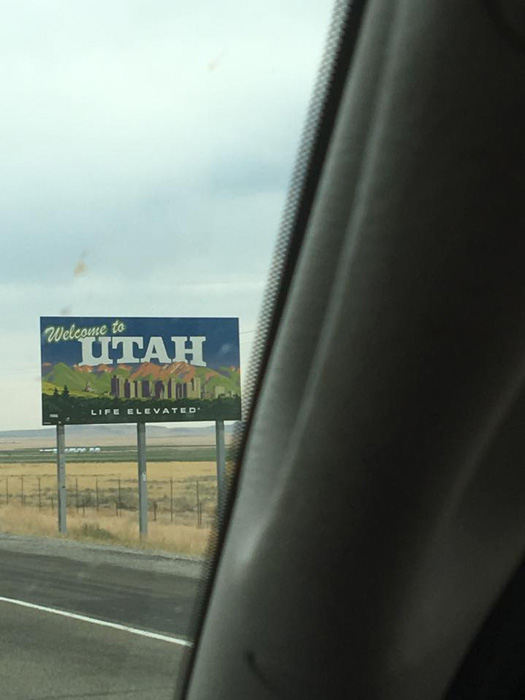 My father-in-law, David, and I headed to Utah for an awesome deer hunt. I decided to pass on a small 3 point on opening morning and, boy, am I glad I did. That would have been my first big game kill. 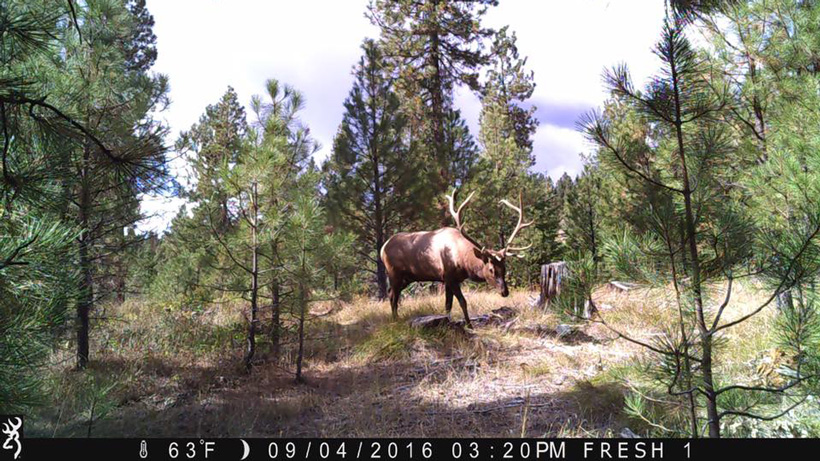 Opening day in Washington fell on Sept. 10. I got off work the morning of Sept. 8. I had to wait to leave since my wife had prior plans. I left that night around 10 p.m. and arrived at the campground around midnight. I sat in my sleeping bag tossing and turning, running every possible scenario through my head. Finally, I dozed off after I set my alarm for 5:30 a.m. I ended up waking late at 5:45 a.m. and rushed to get going. The plan was to head into where I had seen that bull on the trail camera and listen for bugles early in the morning. I hiked in and was set up at about 6:20 a.m.

I grew impatient because I figured I would have heard something by now. I decided to bugle. Immediately, I was met with a bugle very close by. Suddenly, I heard a crash coming my way. I was in shock, so naturally I kept calling, which was, luckily, not a mistake. The bull came crashing in until he was about 100 yards out and let out a bugle. I decided enough was enough; I didn’t want to scare him off. Luckily, he never saw or winded me and, eventually, casually walked off. I was jacked up. I called my father-in-law and my caller, Steven, to tell them the good news.

I woke up opening morning in denial; that bull will not be there. David and Steven assured me if I didn’t spook him that he would be there. It was fairly chilly that morning so I layered up accordingly. We got to the spot around 5:30 a.m. We hiked up to the first ridge and we decided to wait there because there was a small meadow and water below us and we didn’t want to jump anything in the dark. Just before daylight we heard a bugle close by down to our right. I felt a knot in my throat and my heart rate elevate. I had a once in a lifetime opportunity here and didn’t want to mess it up.

We had the wind in our favor that day and decided to set up 100 yards to our right. I was in place and Steven my caller set up about 100 yards behind us. Steven started bugling and every bugle was met with multiple bugles throughout the area. The bull we first heard was now moving below us at about 300 to 400 yards away. You could hear him crashing through the woods from right to left. Finally, he made it to a knob to our left, continuing to respond to every call we made. He got hung up on this knob, which made me impatient. I told my father-in-law that I was going to close the distance. He told me to wait.

I always thought about if I would pass on a 5x5 or even a small 6x6; the locals told me how big the genetics are out here. The moment I saw this bull I knew I could not pass on him. He came walking in very cautiously about 100 yards out when we first saw him. The first thing I noticed was how wide he was and his massive G4. I figured at this moment I would be way more nervous and shaky, but I wasn’t at all. I felt like I do on a critical call as a paramedic. I seem to work best under stress.

Steven headed down the knob we were on, simulating a herd leaving. This did the trick. The bull started right toward me. I was to the left of a tree with minimal cover between us. I drew back on him at 40 yards. He continued straight toward me and I kept telling myself don’t shoot until you know you can kill him. He held up at 20 yards and let out a bugle. That is a moment I will never forget—I felt like I was the star of the hunting shows I always watch. I kept thinking to myself that this cannot be real, this is going way too perfect, everything we planned was happening as it should.

He paused after bugling and started heading to my left. I knew this was it. I knew that I was about to shoot my first elk, my first big game, my first bow kill. I waited until he was 10 yards perfectly broadside; time seemed to be at a standstill. I let my arrow fly. 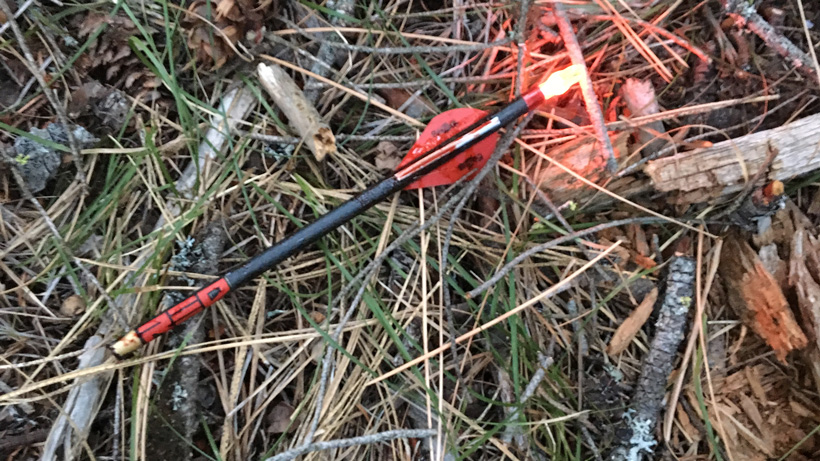 The first words on film are, “David, I think that’s good!” The bull took off and stopped 20 yards away, I saw copious amounts of blood coming out. I did it, not only did I just shoot my first elk, I shot a bull that most people only dream of shooting. He continued another 10 yards before he fell. 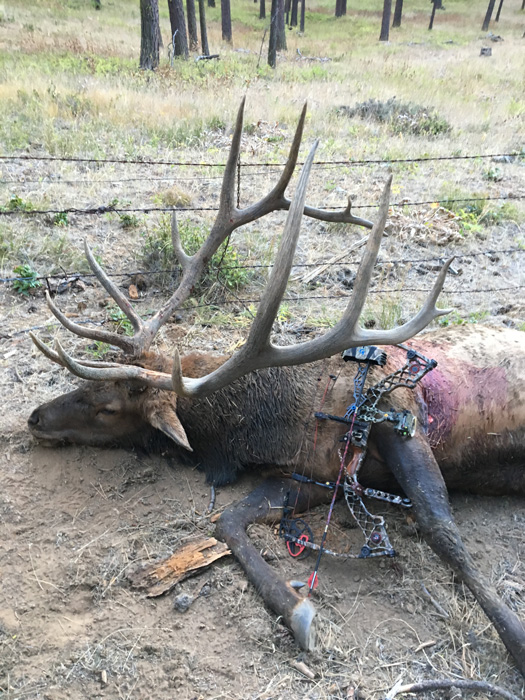 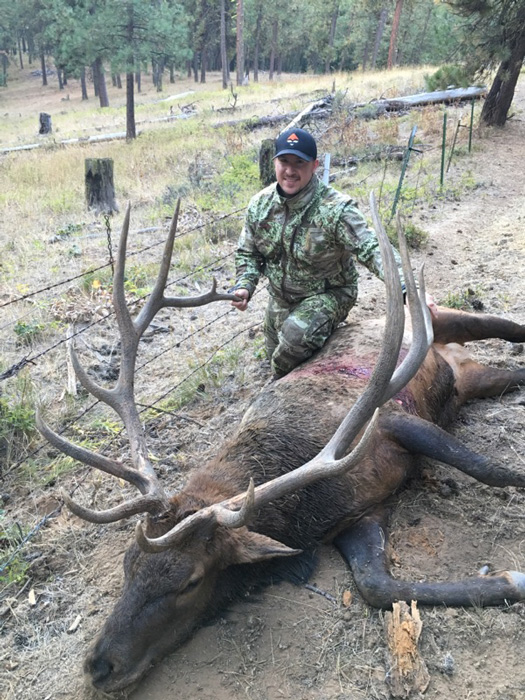 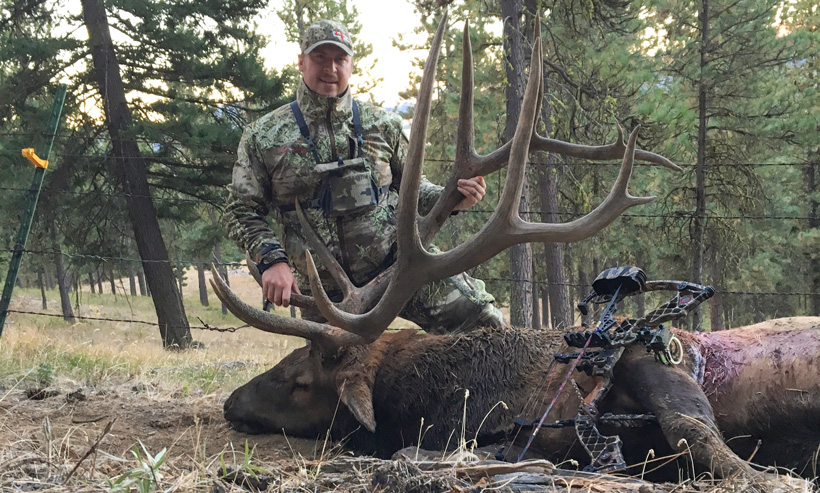 I will never forget that moment for the rest of my life. I think the most important thing we can do as hunters is to pass along our knowledge and stories to our kids and grandkids, which will continue this great tradition. 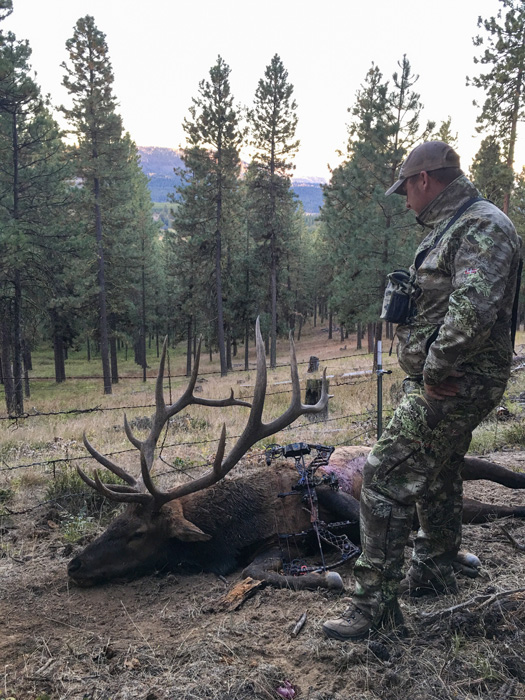 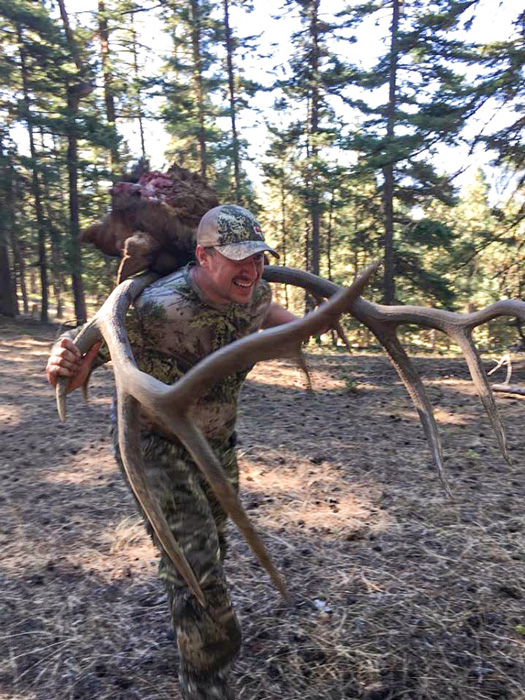 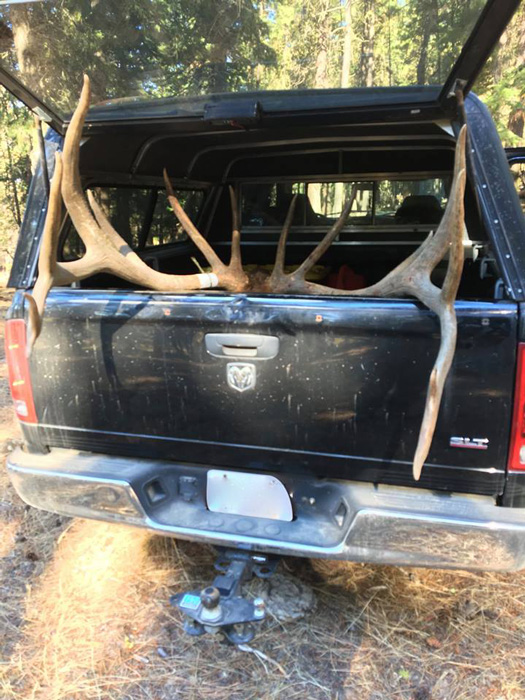 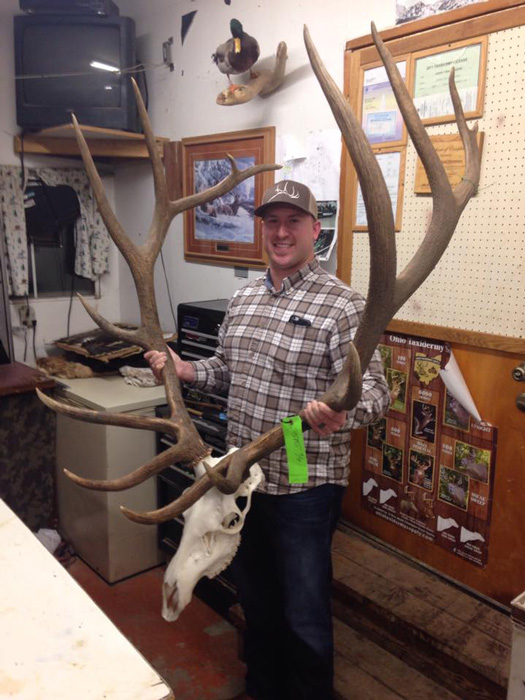