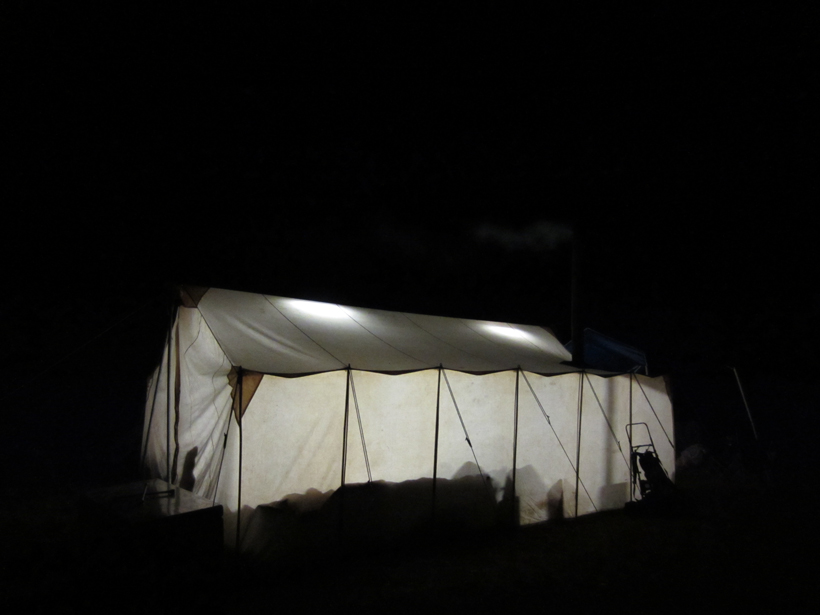 I was sitting on the end of my cot near the barrel stove of our wall tent, untying my muddy boots after a long day of hunting. In the corner of the tent, burgers sizzled on the camp grill as my good friend, Kody, flipped them. Sparks flew from the wood popping in the stove as our other friend, Garth, stoked the fire. The conversation we had that night set the ball in motion for one of the best hunts of my life that happened two years later.

A few years earlier, Garth’s wife had drawn a limited entry elk tag in Utah. Along with shooting an awesome bull, Garth shared stories of great bulls, amazing country, and the hunt of a lifetime.Sitting there that night I made up my mind that this was a hunt that I wanted to do and with a bunch of points accumulated in my home state I knew that, with luck, I could pull the tag out of the drawing. 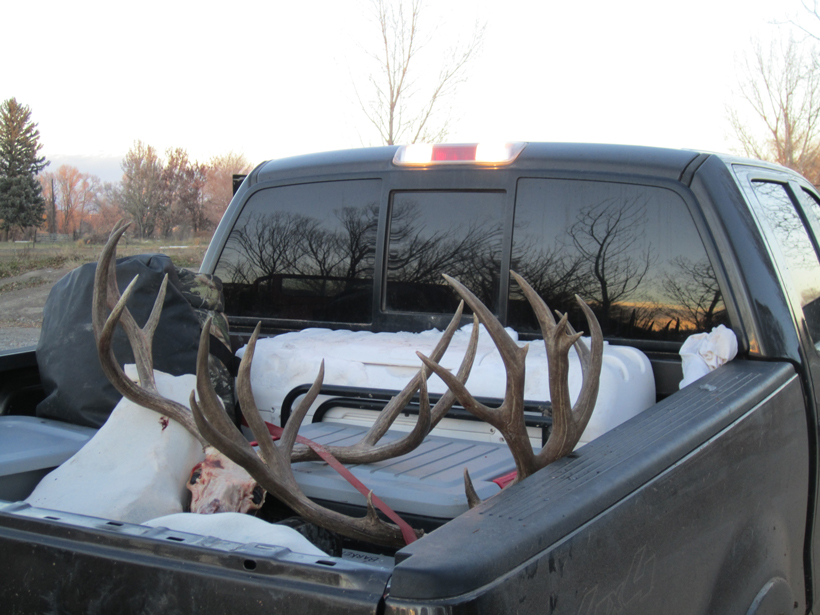 During the drive back from our Colorado deer camp that left us with some awesome bucks and great memories, Kody and I decided to apply for an archery tag together. Two years later, with 13 bonus points between the two of us, our names were finally pulled out of the drawing for our Utah elk tag. 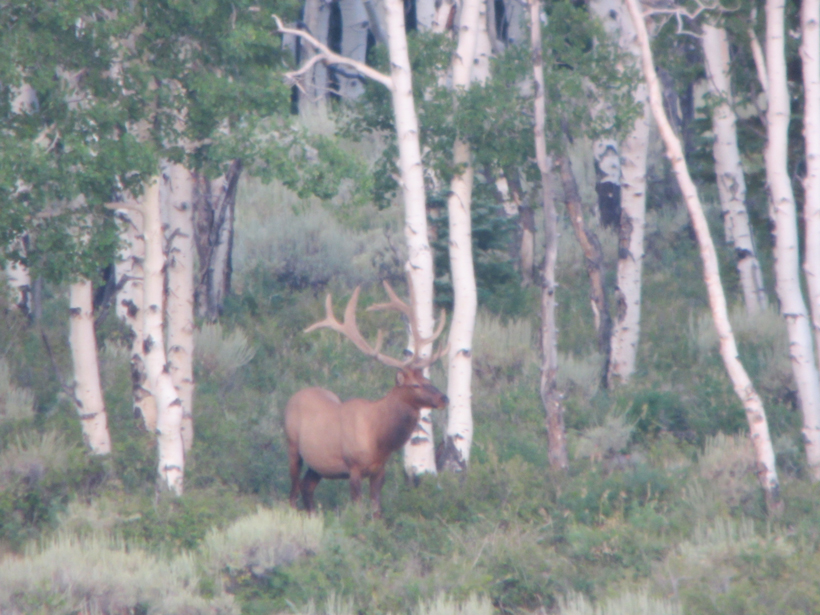 Incredibly excited, Kody and I started scouting in early June. We needed to becomefamiliar with the area and set up trail cameras and blinds, figuring out where we wanted to hunt. As the weeks progressed there was not a weekend that one of us was not on the mountain. Each weekend it was exciting to see how bulls were growing and becoming more and more familiar with other areas. 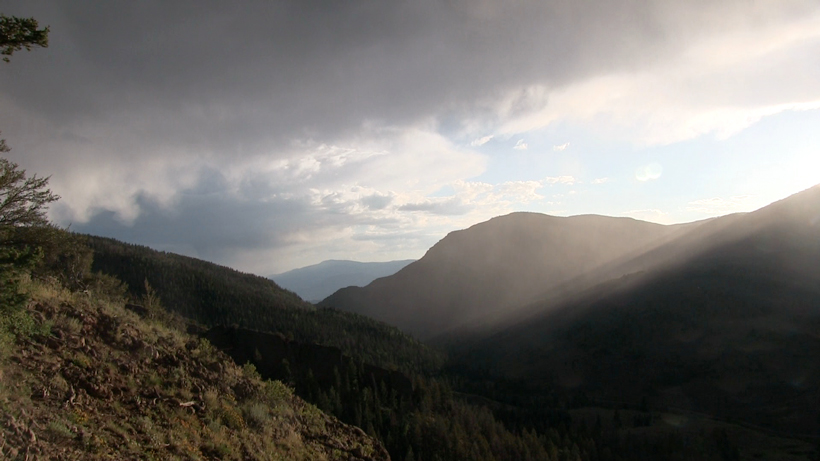 During a few of our scouting trips, we worked our way far from any roads and into the backcountry, surrounding ourselves in some of the most beautiful country I had ever been in. Bulls began to hold close to water as the heat of the summer increased. 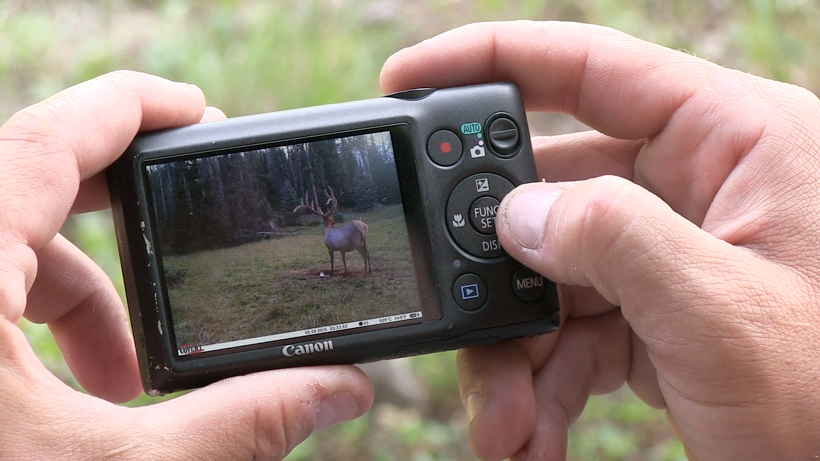 We had a few bulls located that we would have been happy to put our tags on. As the season grew closer, so did the anticipation of opening day coupled with the stress of using 13 years of points to draw the tag. I had been on some hunts with friends that had taken years of applying (and gaining points) to draw and I had felt their stress — now I was beginning to understand just how they felt! 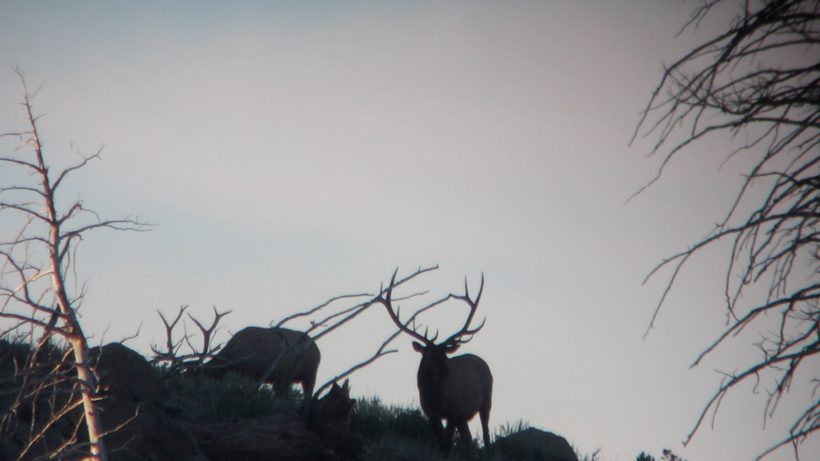 A couple of weekends before opening day, I located a new area that seemed to hold a few bulls. We decided that if the bulls stayed in the area, this would be the first place where we would hunt. Fortunately, when we returned to the unit a couple days ahead of opening day, we found that the bulls had not moved far. It was a sleepless night as opening morning closed in. Garth and Mike both showed up well before light and we started our hike to the glassing point where we had been watching the bulls for the last few weeks. As dark turned to light it did not take long to locate the bulls. Kody and I headed in their direction as Garth and Mike kept an eye on them and planned to help us as we inched closer.

As we made our way slowly through an aspen stand we could tell that the group of bulls had split up. Knowing there were a couple of shooter bulls in the group Kody and I split up and worked two different groups of bulls. I ran into a spike and was pinned down for fifteen minutes. After he finally moved on I snuck to the edge of the trees where we last knew the location of the bulls. 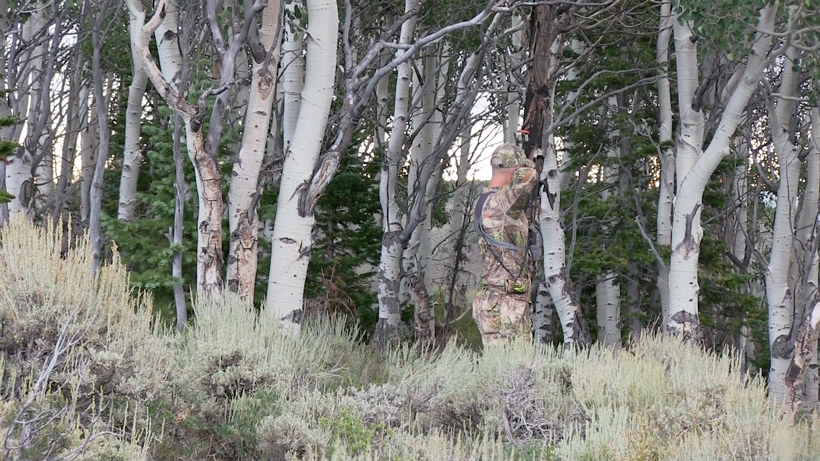 As I scanned the area I noticed that Kody was looking at a bull that was working his way back into the trees to bed down for the day. We met up and discussed what to do. Kody unselfishly told me to stalk the bull and he would run the video camera. I was humbled that Kody would offer me the opportunity and a few minutes later I was stalking the bedded bull. The 6x6 was bedded in a small ravine quartered away and I was able to stalk within 45 yards of him. I had a decision to make: wait for the bull to stand or take the bedded shot. With the wind starting to swirl I placed my pin in the middle of his body and anchored my string to my nose. 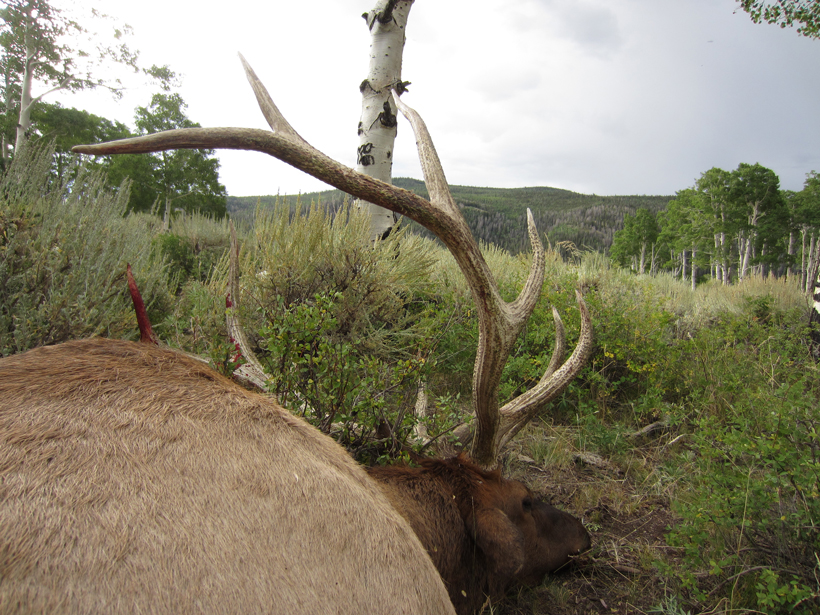 With the release of the arrow the bull exploded from his bed and ran to the south of our location. Both Kody and I felt it was a good hit, but decided to give him some time. We talked with Garth and Mike, who had watched the whole event unfold, and said that the bull was obliviously hurting after the shot. We thought he would not be far. 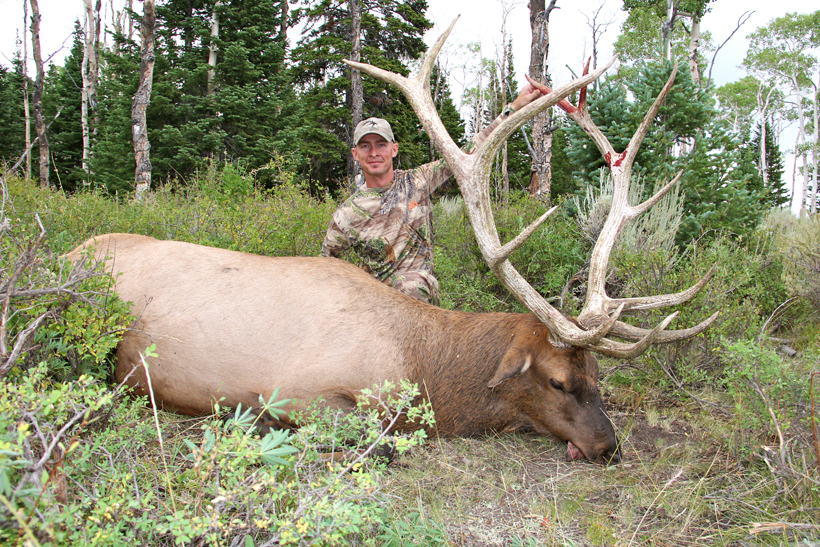 After an hour and a short blood trail Kody saw antlers above the brush in front of us. Walking up to the bull I stood in awe and realized that after thirteen years of applying, my entire hunt had lasted 45 minutes. 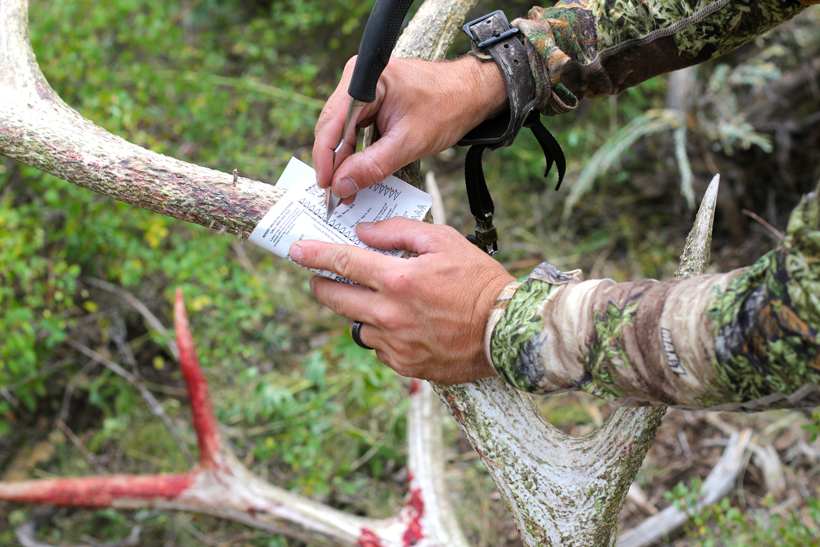 We took pictures and caped the bull. A few hours later we made it back to camp and started to strategize for Kody’s hunt. 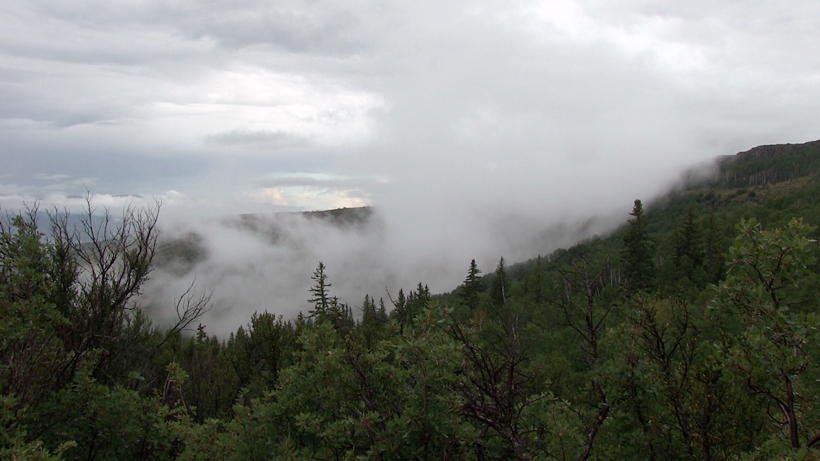 With a number of good bulls coming into water near our blinds, we turned our attention to sitting water. This lasted a couple of days before the rain came. Over the next 18 days, it rained constantly. 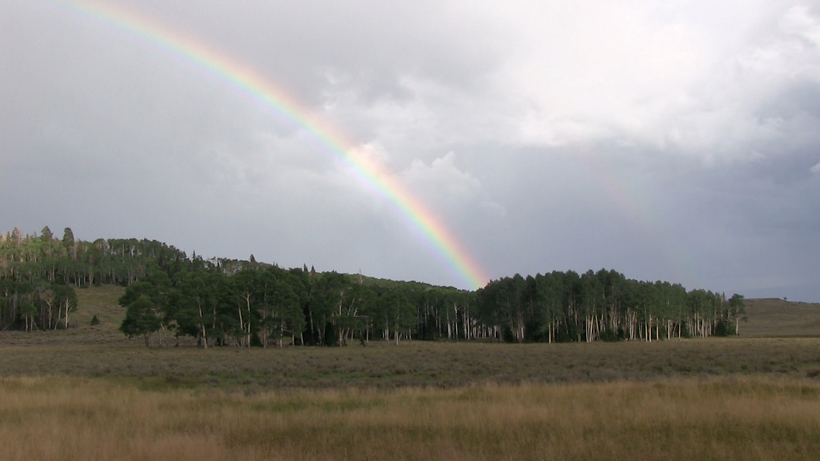 The rain made travel and camping conditions horrible and the elk completely quit coming to water and the areas that we had our blinds set up. We encountered numerous bulls each day and stalked a few giants pushing into the 380” to 390” range. 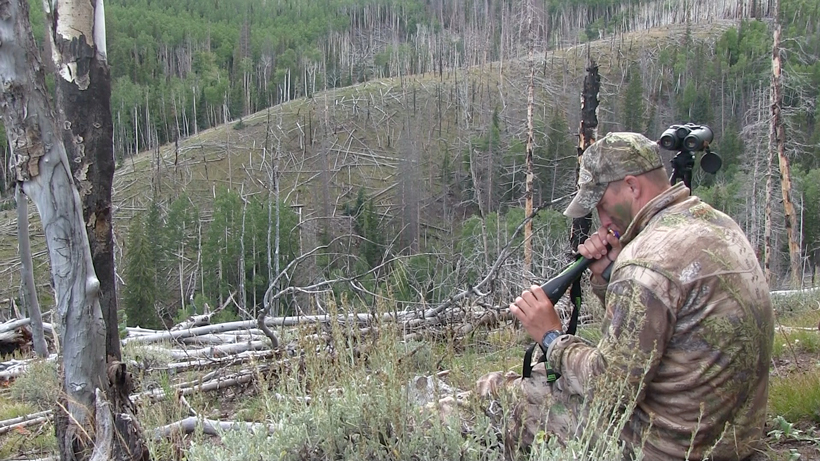 I have never witnessed anyone hunt as hard as Kody did for the remainder of the hunt. He pushed his limits until the last minute of the hunt, and as the hunt closed, Kody decided to hold onto his tag, passing on many bulls in his quest for one of the giant bulls that roamed the unit.

I have had some time to look back and reflect on this hunt. Although I was able to harvest my best bull to date, the bull is not the biggest trophy that I came away with from the hunt. The greatest accomplishment and memory for me was being able to spend three weeks on the mountain with some of the best hunters and friends that I could ever ask for. 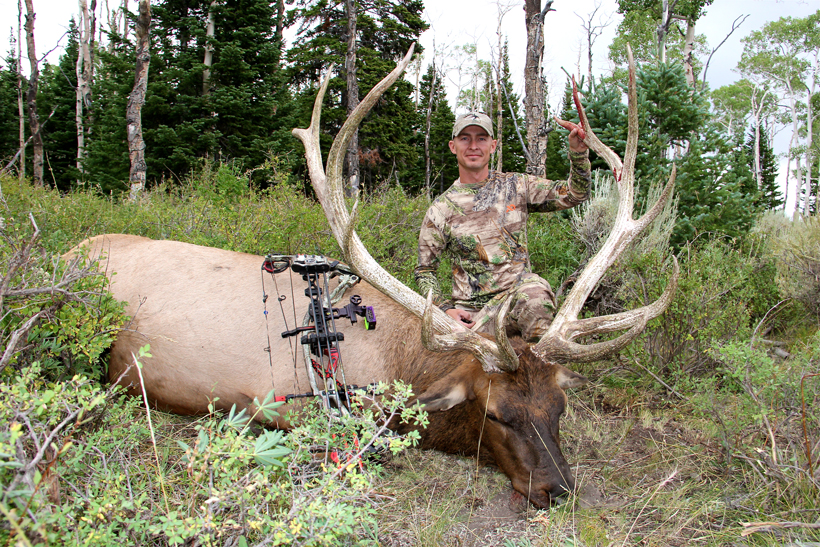 The memories that were made on this hunt are some I will cherish for the rest of my life. No bull, no matter the size, could compare to the time I spent on the mountain with our group of friends. Thanks go out to Kody, Garth, Mike, Karson, Shay and Billy for the time and efforts you put in for making this hunt a success and moreover the memories you helped create. Thanks for helping cure my 13-year itch.