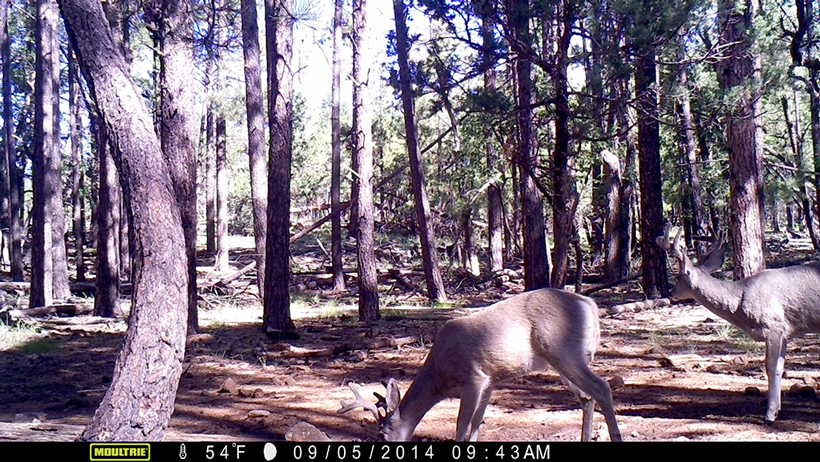 Trail cameras are a great scouting tool and when used properly, they can be both effective and ethical. I have used trail cameras as a means of collecting data for nearly a decade, and use my cameras to scout year-round. This summer, I captured several good Coues deer bucks on camera, but did not know they were out there until two weeks after the end of early archery season since I was unable to check the SD card until then. It's always a surprise to see what shows up!

I am always a little anxious and nervous when walking into one of my camera sites, wondering if my camera will be stolen. From a distance, I can usually see the camera box and breathe a sigh of relief, but recently, when out checking on my trail cameras, I noticed something odd. At one particular site is an old mineral lick that holds a small amount of water during the fall monsoons — perfect for ambushing unsuspecting Coues deer looking for a late morning swallow of water before bedding for the day. 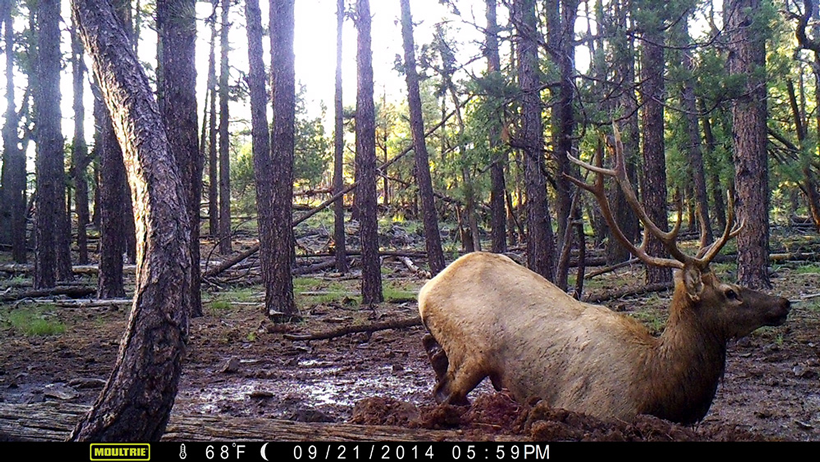 As I approached the area, I noticed that there was a downed log in front of my camera and was covered with mud. I figured a bull elk must have wallowed here, applying mud to the nearby log, but as I neared the area, I realized that my worst nightmare had come true — the lock was cut! 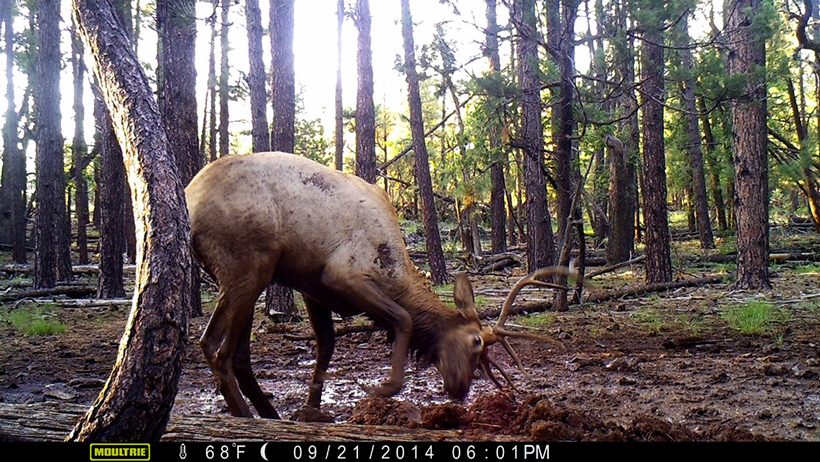 To my surprise, the camera was still there in the bear-safe container! At this point, I did not know what to think, but I assumed the camera is turned off and the SD card is gone. So, I disassembled the box, took the camera out, and opened it to find that it was still on and the SD card was still there. Again, I was stumped. Who cuts a lock but does not steal the camera? I put the camera aside and investigated the site. The small pool of water had not been deepened, so it was holding quite a bit of water. My best guess was that an elk hunter found the spot, cut the lock to get to the camera, saw a few pictures of bulls hitting the small pool to wallow, and then proceeded to take it over as his own — at least for the two-week elk hunt. 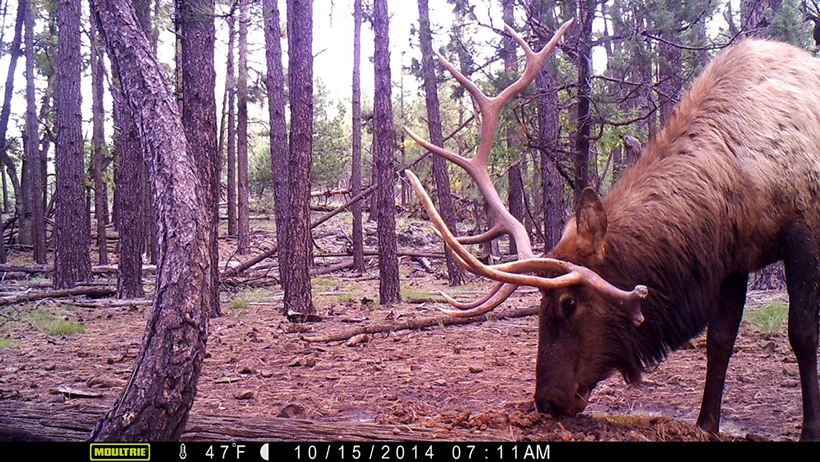 Although the site was on public land, having your site taken over by another is not much different from someone breaking into your house and living there while you are on vacation — without your permission. Reluctantly, I put a new SD card in the camera and put the camera and box back together. As I left, I wondered if this “hunter” — loose use of the term — will try to reclaim my spot for a second time.

A month later, I headed back out to check the same camera. During the hour-long drive and the half-mile walk I was riddled with anxiety. As I neared the site, my worst nightmare had once again come true. I can already see that the bear safe container has been broken into — my heart sank. I’m fed up with people! As I walked up to the tree, I was stunned, the lock is still locked, but the box has been ripped apart and the camera is gone! Why would someone — let alone another “hunter”— do that? It is a question I could not answer. Trying to calm down, I walked away and take a couple of deep breaths. Calmed, I walked back to the tree to gather all of the remnants left behind and I knew I would never return again! However, as I approached the tree this time, on the ground, not 10 feet away is my camera and it was still on. I was able to see a red light illuminated! More confused than ever, I packed everything up and headed home.

On the drive home, I thought about all that has happened in the past month. My site was attacked, not once, but twice and at that point, I decided to never return to the site and perhaps not even return to that management unit. Luckily, I still had the camera and SD card which hopefully had a few pictures worth looking at. At home, I installed the SD card into my computer, opened the folder, and scrolled through the pictures, hoping to find a picture of the culprit, but I saw nothing. This was a big disappointment because I at least wanted to see the face of the person who repeatedly destroyed my site. I scrolled through the pictures to look for the animals that visited the site over the last month, but nothing exciting appeared. Then I noticed that the last three pictures were taken from the ground, after the camera had been displaced from its container. It was not until then that I noticed something else just as strange — what is that in the last image, the legs of an elk? 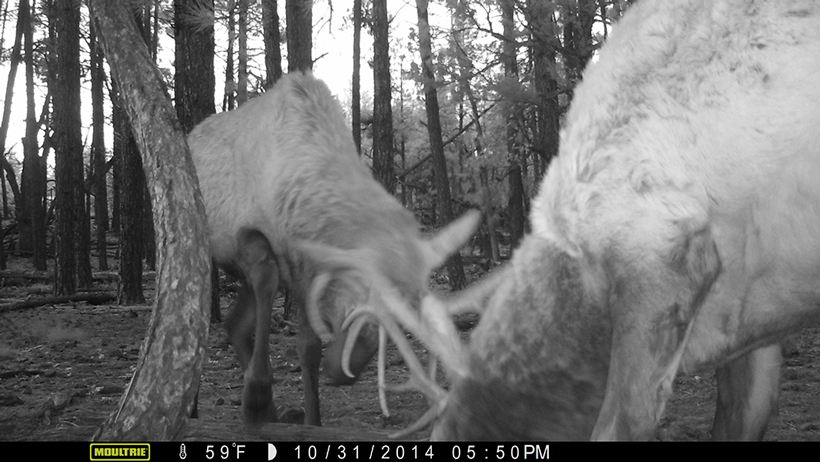 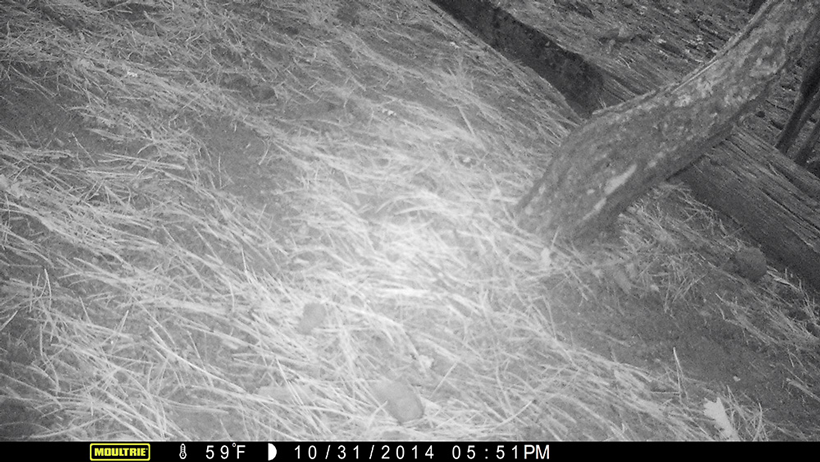 Again, I hit the forward arrow, it was a photo of the tree tops and a set of elk legs at 5:51 p.m. If the camera was in the box at 5:50 p.m. and the camera took another picture at 5:51 p.m. — wait a minute? It wasn’t a person? Could two bulls really have done this? To my amazement, the pictorial evidence proved that two small bulls sparred in front of my camera, probably got on opposite sides of the tree the camera was hanging on, caught an antler tip in one of the holes of the bear safe container, somehow opened the box and spilled the camera onto the forest floor. I was amazed and relieved. In fact, I was so relieved that I immediately headed back to the site to re-install the camera.

Please keep these in mind when hanging a trail camera: