Why you need to attend a long range rifle shooting school 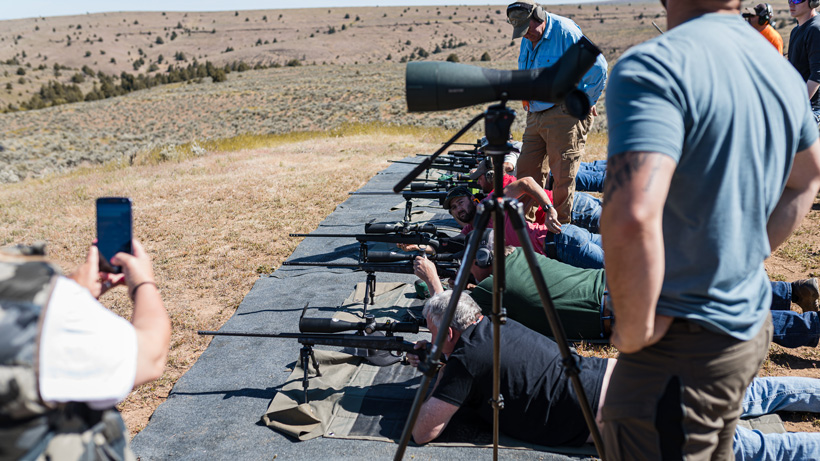 It’s that time of year. Everyone is starting their post draw hunt research and dreaming about the upcoming season. But… the offseason is also the time of year to think about how you can become a better hunter. If you’re a rifle hunter, everything about shooting a rifle starts with a solid foundation. And in this case, a solid foundation starts with your education, so one of the best things you can do to exponentially increase your success this coming season, in my opinion, is to attend a long range rifle shooting school.

We can’t control the weather, we can’t control animal movements and we certainly can’t control how many other hunters are in our “honey hole.” But what we can control is ourselves and our shooting ability. And if we don’t have the proper training… will we make that shot count in the moment of truth? Myself, I’d rather not leave it up to chance.

Importance of a rifle shooting school 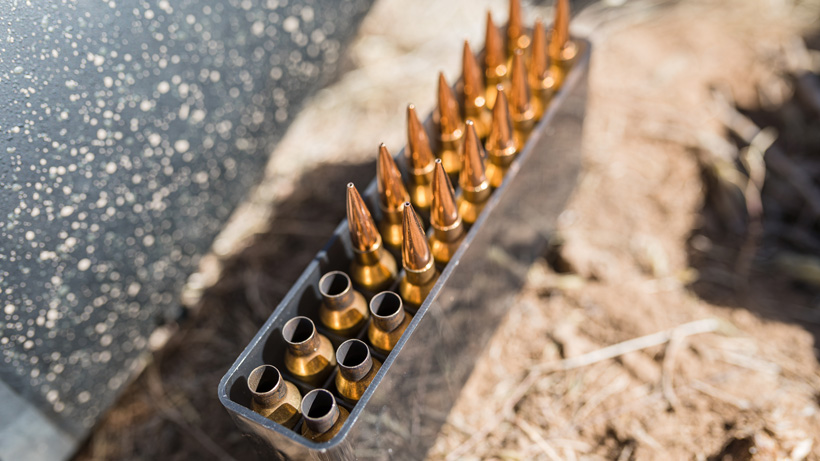 Last offseason I decided that I wanted to change the way I approach my shooting. I’ll be the first to admit that up until this point, I had never considered how a rifle shooting school would benefit me. But, I believe that is something that needs to change in a lot of our heads. For the most part, I believe we all assume that we know what we are doing since we have shot a rifle our entire lives. But as I soon found out… I still had a lot to learn and a lot of mistakes that I needed to get corrected. Last year I attended Bob Beck's Extreme Shooting School in Oregon. His Extreme Shooting School has two levels. The course I attended was the introduction/intermediate course and they also have an advanced course that expands on even more techniques. I’ll quickly say that it was money and time well spent and the best two days of instruction I could have asked for! A long range rifle shooting school teaches you an endless amount of information that will exponentially benefit you!

Attitude to have going in

Most of us have been shooting rifles our entire lives. And lets face it, we can be a little hard headed in our ways. After all… the bullet, for the most part, has always reached our target, so could we actually be doing anything wrong? More on this later.

It’s time to check your hard-headedness at the door when you attend a school like this. Show up, act like a sponge and soak up every bit of information. After all the coaching, practice and refined shooting techniques, I’m confident in saying that you will walk away a better shooter.

What you’ll learn at a long range rifle shooting school 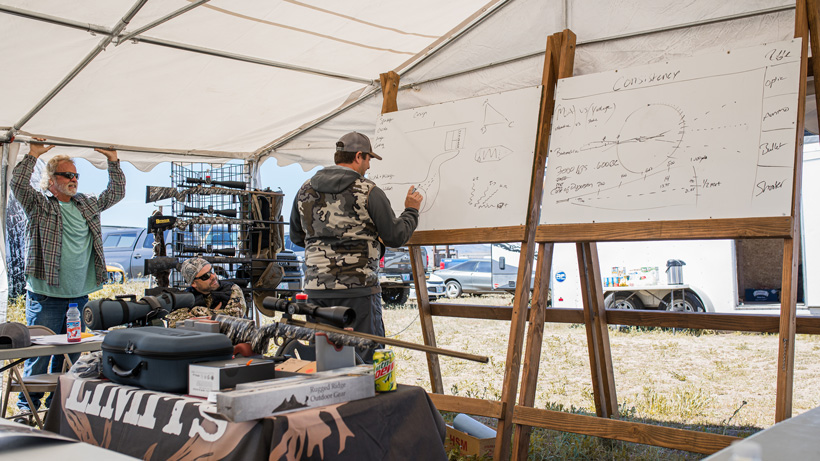 Classroom sessions like this are a wealth of information.

So you’re telling me you can teach an old dog new tricks? These long-range shooting courses are taught by extremely experienced shooters/hunters. Which I why I mentioned earlier that you need to act like a sponge and consume all the information given to you. I filled up page after page of notes during the two-day course. 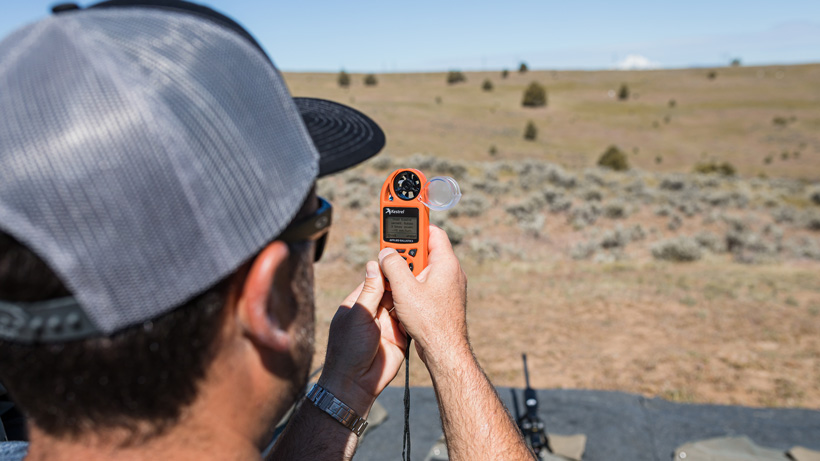 The weekend of shooting school education started off strong and heavy with roughly four hours of classroom time. This was a huge help for me. We were free to ask as many questions as we had, and Bob dropped a ton of knowledge bombs on us! Topics included the explanation of MOA, why yardage turrets are a gimmick (one discussion I really enjoyed!), reading wind through mirage, cone of dispersion, ballistics, fundamentals of making a long range shot and a plethora of others. After the classroom session, we moved out to the range for the rest of the day. At this point, it was all about rifle sight in and working on building a solid shooting foundation and executing proper techniques. 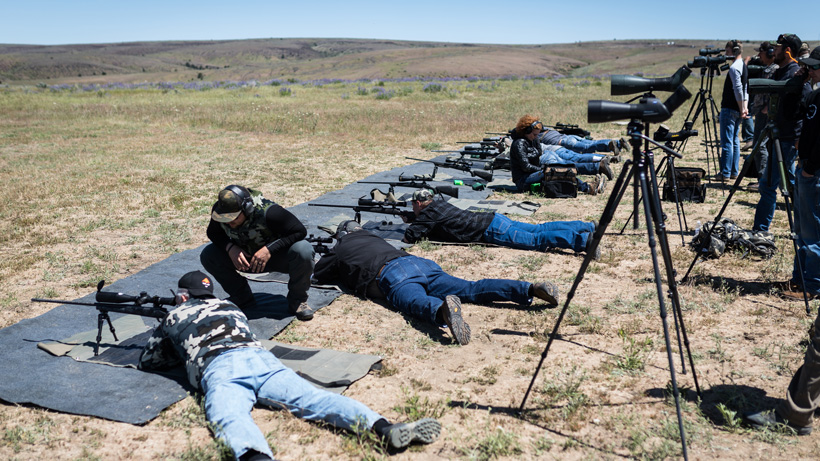 First session of instruction. You'll notice my dad's form in the lower left. He has been shooting like this forever. Shortly after Calvin kicked his legs over more than once to position him in a more repeatable position straight behind the rifle.

Back to what I was talking about earlier about that bullet still making impact… but even though we’ve always thought we were shooting correctly, most likely, we were doing things wrong.

Let’s face it… when it comes to a lot of things in life, we all believe we know what we are doing. A shooting school was a great way for experienced instructors to tell you that you are in fact, doing things wrong, and most importantly, how to fix them. Most hunters out there like myself probably haven’t had formal training when it comes to shooting a rifle.

The biggest thing for me, was this class showed that even though I thought my form was correct behind the gun, I was letting my body drift to one side. So after being kicked in the legs several times to move my body over, I now know what it actually feels like to have my body in the right position. All these years I “thought” I was behind the gun, but I never had an instructor standing behind me to give me instant feedback. This teaching phase was my favorite part of the course. It began with us firing three shots with zero instruction. We then analyzed our group. Next, they added a quick tip and explained what it will do for us. We fired three more shots, and instantly you could see an improvement in the group. We then continued this process several more times with new instructions until our foundation was ingrained in us. 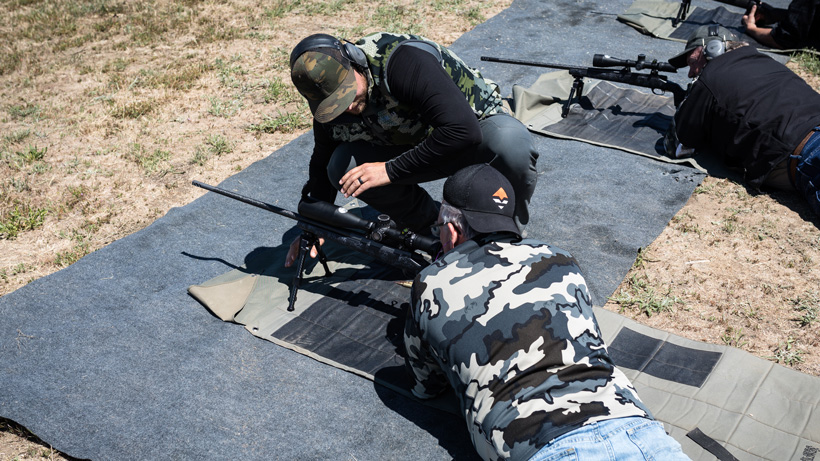 What we saw, was that developing a solid foundation was essential! You might not notice that you’re doing something wrong when you’re hitting where you are aiming at a distance of 100 yards. But once you start to extend the distance to 500 and 800 yards, you’ll instantly see where that prior instruction will pay dividends!

Another huge part for me was finger placement on the trigger. Again, I thought I was doing things correct my entire life. But turns out I was having some slight horizontal trigger pressure. Calvin explained this to me by grabing an empty piece of brass and put it in between my trigger finger and middle finger to further emphasize keeping a straight trigger finger and pressing the trigger like a button. 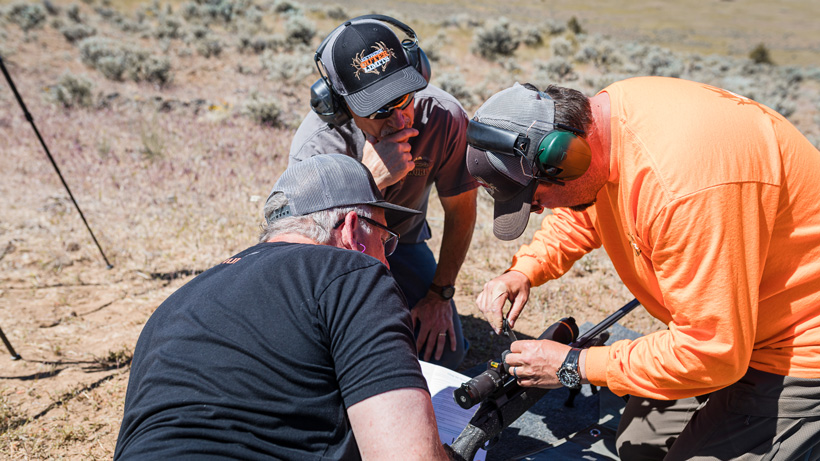 Day two started off similar to day one. The classroom session gave us a chance to describe how we shot and responded to the techniques from day one and dive into an in-depth question and answer segment. After we wrapped that up, we moved on to long range shooting at targets from 700 yards all the way out to 2,000 yards.

The proof is in the pudding

While at the shooting school, there were people in attendance of all backgrounds and levels of experience. Some were even repeat school attendees because it’s so worth it! 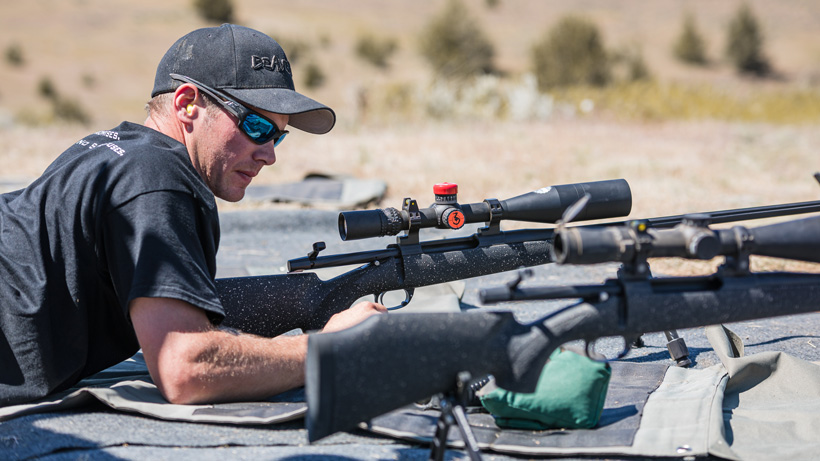 The highlight for me during this shooting school was seeing the level of improvement from my friend, John. My family hails from Minnesota, and as typical of the thick Northwoods of Minnesota, shooting distances are rarely over 100 yards. Before attending this class, John had never taken a shot with a rifle over 100 yards. And after a short day of classroom discussions, and form training, the next day he was ringing steel out past 1,000 yards and even successfully connected at a steel target at a distance of over 1 mile. 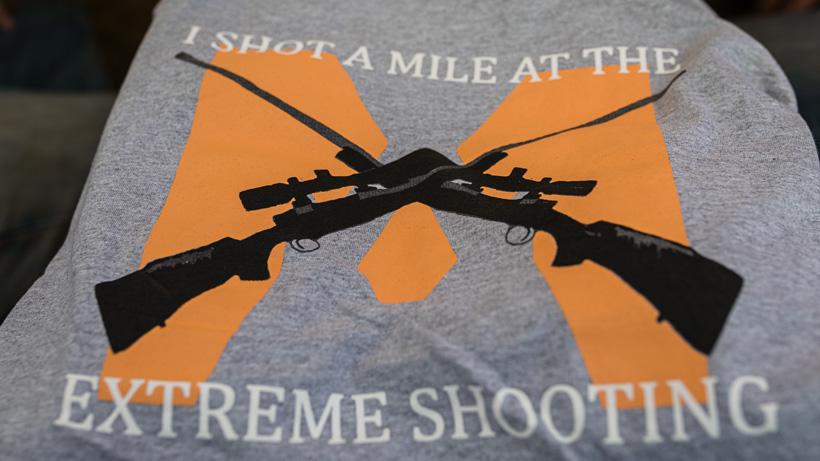 End result was several successful shots on target at 1 mile and then even at a distance of 2,000 yards.

After seeing a long range rifle shooting school firsthand, I easily recommend it to any shooter no matter their level of experience. Core elements that were reinforced to me like pressing a trigger like a button, importance of breathing and follow through, plus a multitude of other tricks, made the shooting school extremely worth it.

As I've said before, a long-range shooting school is worth every penny for a hunter at any level of experience. We spend money on tags, gear, and gas to our hunting spots, but we rarely spend it on courses to improve our shooting ability. 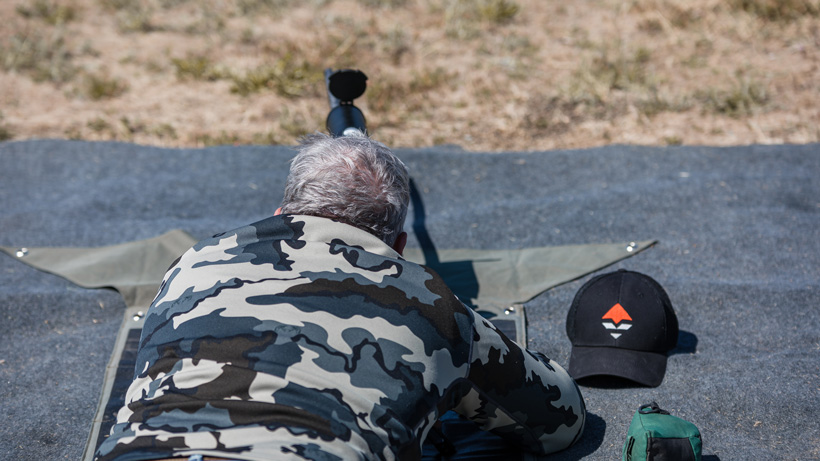 Also, the timing of this course was perfect! The following week I had a Montana bear hunt planned. I returned home, applied what I learned from that shooting course out in the mountains near my house, then made the long drive to Montana a short 6 days later. On day 7 of my hunt which was the last day of Montana’s spring bear season I finally got my chance at a gorgeous color phase bear. I applied everything that I learned and made a one-shot kill at a distance around 450 yards.

Let’s face it, you can do everything right, but if you don’t have the tools and education to succeed in the moment of truth, all of those hours spent researching, planning and scouting were essentially worthless. Currently, these long range rifle shooting courses are put on all across the West, and several on the East coast as well. If you can do one thing this year, it might be worth your time to look up a course like this and give it a try.