Why a quality bipod is important on your hunting rifle 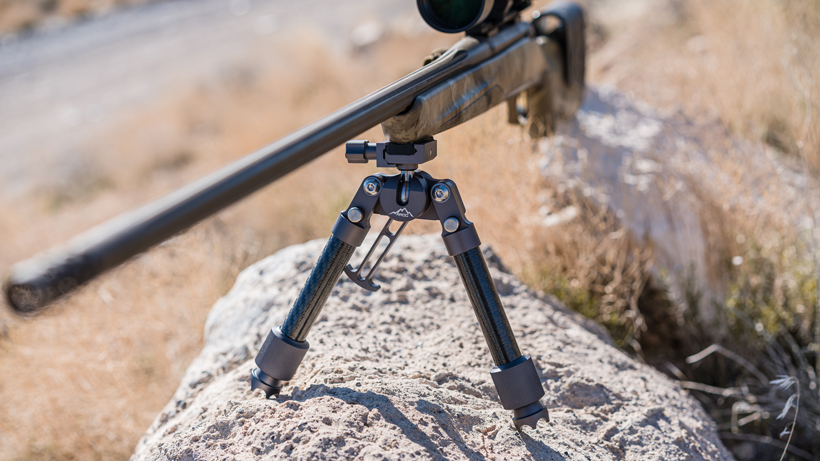 When it comes to a rifle accessory that I can’t live without, it is hands down a bipod. Plain and simple, a bipod makes you a better shooter. If something can make me a better shooter, you can bet that I will have it on my rifle.

There are definitely some situations when you might not need a bipod (hunting thick timber comes to mind) but I like to always have a bipod on my rifle for those “just in case” moments.

What goes into a quality bipod

There are a ton of options out there when it comes to rifle bipods. Some are okay, some are great and some are just about perfect.

Check out the bipods we carry in our Gear Shop

In my opinion, a quality bipod has to have a few key pieces:

Swivel design with a locking lever 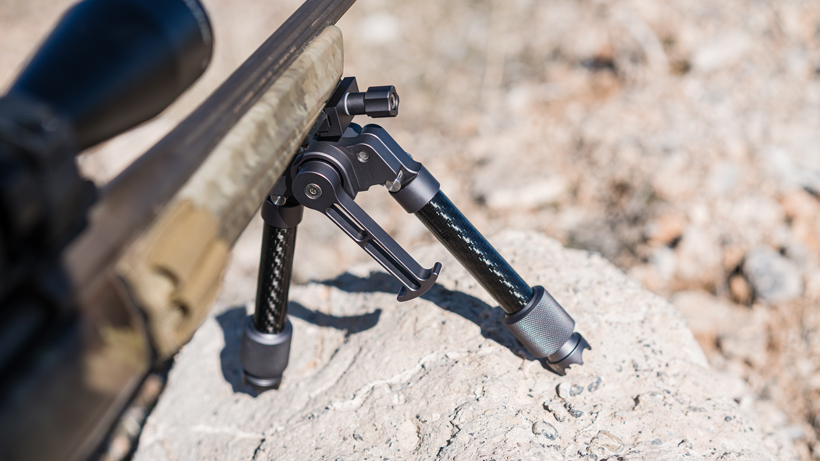 A rifle bipod for hunting, in my opinion, needs to be able to cant from side to side to get the gun level (having a bubble level on your riflescope is key). Once the gun is level I then need to lock the bipod down tight. When I say lock it down tight, I want the ability to remove any play in the bipod for a solid base, but still have the ability to adjust the tension quickly if I need to pick the gun up and move it. This is one of the biggest reasons I’ve been using a Rugged Ridge Outdoor Gear Extreme Bipod since 2017. Note: I’m still using the Gen 1 version, but the Gen 2 version has some great improvements! 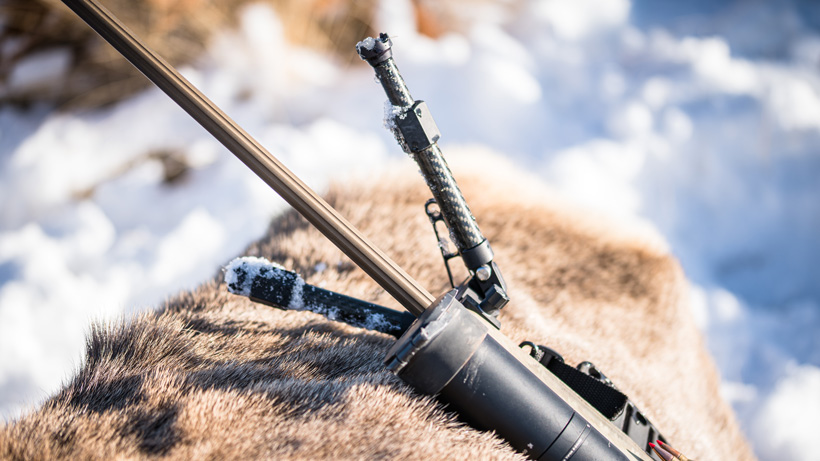 In the above photo, I had to adjust one leg due to the terrain.

I’ve used other bipods in the past, but I was always frustrated at the pre-determined length the legs clicked out to. On those bipods, for me, the pre-determined length was almost always not the right position I needed. I haven’t seen a spot in the mountains that is perfectly level, but to get around this, you can always just adjust one bipod leg to a different length if needed.

These examples are why I like a bipod leg design that is fluid on the length and allows for quick adjustment of a leg if needed. Then with that fluid length adjustment, I’m also able to lock that length in place with one quick motion. 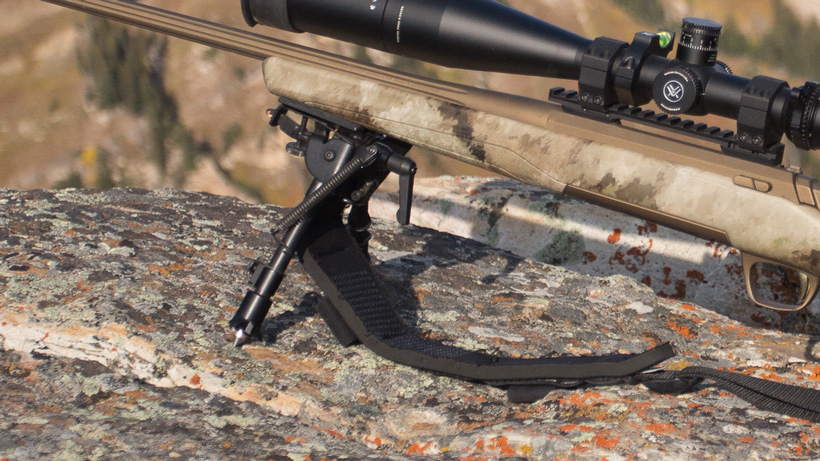 For simplicity’s sake, some people might prefer how quick it is to just pull a bipod leg and have it lock into small adjustments. So depending on your use case, like everything, there are pros and cons to each that you need to consider. If you like a leg design like this, take a look at the Harris SBRM 6 to 9 inch or even the Harris S-LM 9 to 13 inch. Both of those give you the ability to swivel and have locking leg lengths.

Another great feature of a bipod is to add more length if needed. 90% of the time for my style of hunting a 7 to 10” bipod is perfect. But if you ever were to need more length, leg extensions are a great option. 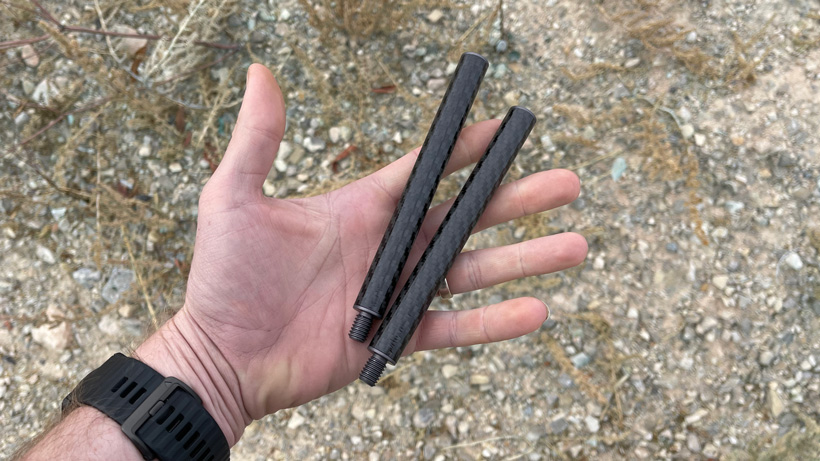 Rugged Ridge makes this easy with two different leg extension options. You are able to get 5.5 inch or 17.5 inch extensions. Note: these extensions will only work with the Gen 2 bipod version due to different threads.

More on the length of a hunting bipod later...

Most bipods on the market can be used for a downhill or uphill shot. But a feature I really like having is the ability to rotate the bipod around for an uphill shot which then allows the claw feet to come into contact with the ground a little more solid. This is all achieved by the ball and socket design that a bipod like Rugged Ridge has. Or you could also use this feature with the bipod in a normal position when shooting steep downhill shots off a cliff.

There hasn’t been a lot of situations where I’ve had to flip my bipod around to take a steep uphill shot, but I have that feature if I ever need it.

Able to attach to a picatinny rail 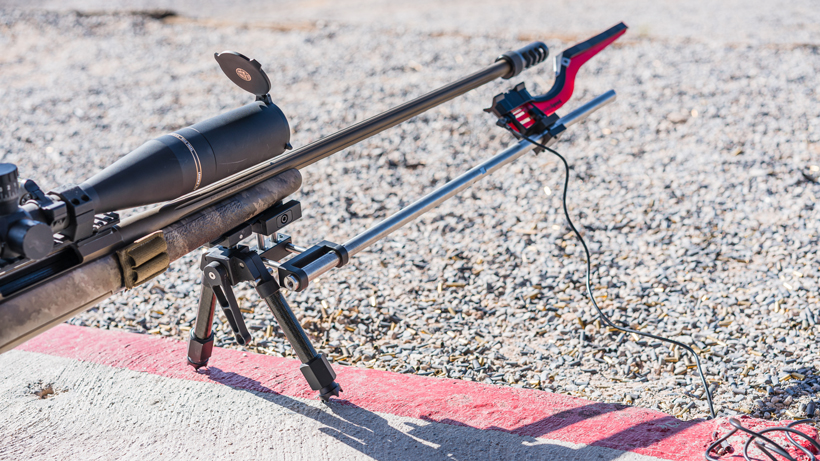 This might just be a personal preference of mine, but I prefer a bipod that attaches to my gun with a picatinny rail. I typically install a 4” picatinny rail on my rifles and muzzleloaders. This allows me some flexibility on where I put my bipod and also gives me some freedom to also add a pic rail mount for my Magnetospeed Chronograph.

If you prefer a bipod that attaches to a sling stud in the stock, then by all means go that route. Either method works great.

So the big question, what size bipod should you get? 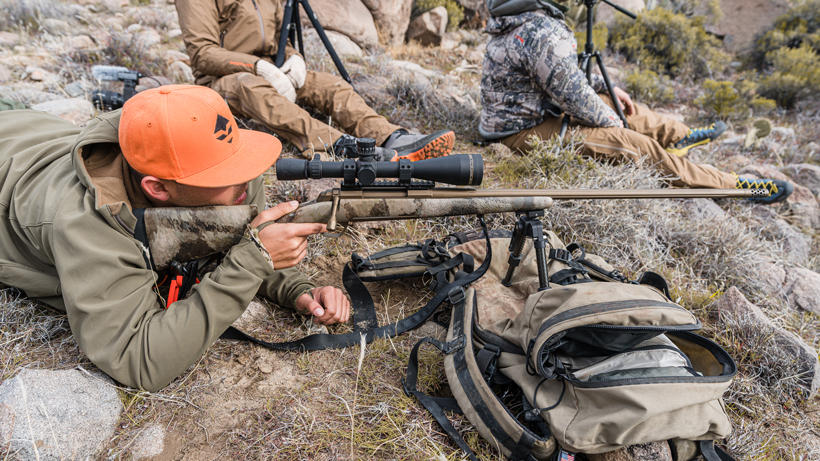 This is probably the most common question when it comes to rifle bipods. What size bipod should you get? And just like everything, there are personal preferences and pros and cons to all of them.

While there are certain bipods out there that offer a ton of length adjustments, but when they get on the taller side you are sacrificing stability. That turns me off. They might work great for close shots, but those legs when in a longer position will start to flex. A lot of this is due to the design of the legs having to be a smaller diameter to allow the extra leg sections to stack inside each other.

For example, this past spring while black bear hunting I was anticipating a bear to come out on a hillside that would have needed a very steep uphill shot. From the position we were glassing from, the only real option was the try a taller bipod. So I asked my friend if I could toss his bipod on my gun to practice a bit before the bears started moving. I swapped the bipod over and while it could have worked, I just wasn’t comfortable with the amount of flex in the legs and the movement. So right then and there, it was determined that if a bear came out in this area we were going to try to find a better spot to shoot from. Also in this situation I tried to see what shooting off my backpack placed vertical would be like, but I didn’t feel that was a great option either.

A bipod is meant to allow me to be extra steady and closer to the ground. Which is why for all of my hunts I use a bipod that goes from 7 to 10 inches. If I need something taller, most likely I won’t be taking a further shot and can lay my gun on my backpack. 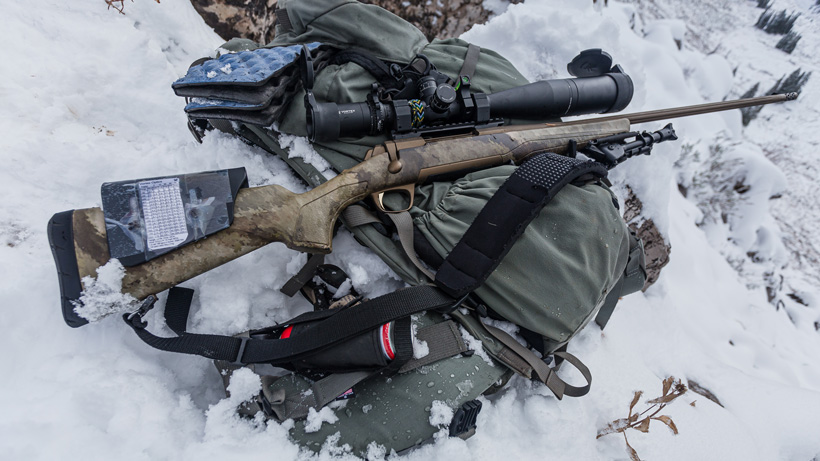 This exact scenario happened on a past mule deer hunt. The snow was so deep that trying to use my Harris bipod was impossible. So I just tossed my backpack down and was able to still make the shot count.

Also figuring out what size bipod you need could come down to comfort and your body type too. For example, if you have a deeper upper body/chest, it might be uncomfortable trying to get really low in a 7-10” bipod.

Now to throw a curveball… 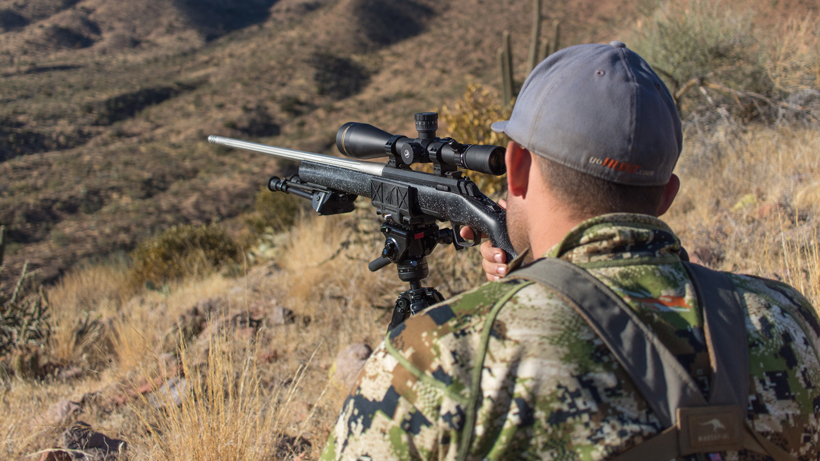 Let’s say you don’t have a bipod, but you want the ability to shoot off something to be more stable. This could either be for shooting while seated or standing up. For these situations, there’s a device that can be attached to a tripod that can make you very steady and can allow you to take a comfortable shot that might not have been previously possible. That product is a Triclawps Solo Rifle Saddle and Tripod Mount plate. To use this, you will also need to attach a tripod plate to the bottom that fits your particular tripod head.

Attaching your rifle is very simple. Just place your rifle stock in the clamp and tighten it down. Then from there, you will use your tripod head to get setup on an animal then lock the head down. This is also a great tool for kids or anyone who might need a solid shooting platform. 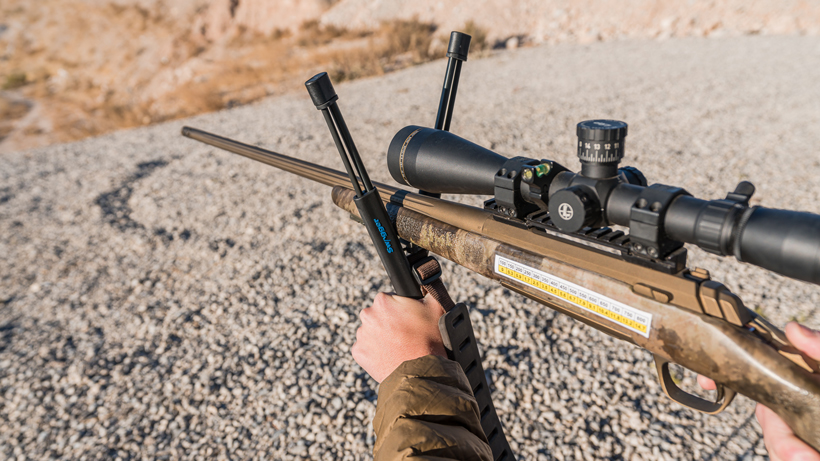 And one more curveball, if you absolutely don’t want a bipod, you could always use shooting sticks like the Swagger Stalker Lite. 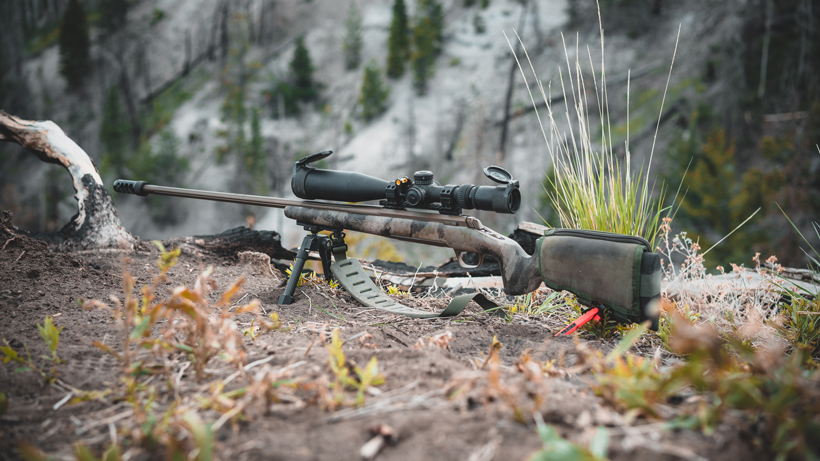 There are definitely times when a bipod isn’t needed and you could lay your gun across a backpack or even on a log or tree. I’ve done that plenty of times. I’d rather have a bipod and not need it, than need it and not have it.

If you’re going to use a bipod on your hunting rifle, I can’t stress enough how important it is to practice shooting off a bipod and even tossing in some hunting type situations in your practice. Learning how to use all the function on a bipod and practicing with it will definitely increase your accuracy while hunting this coming year.

One little hint, the goHUNT Gear Shop will be carrying Atlas bipods this spring!