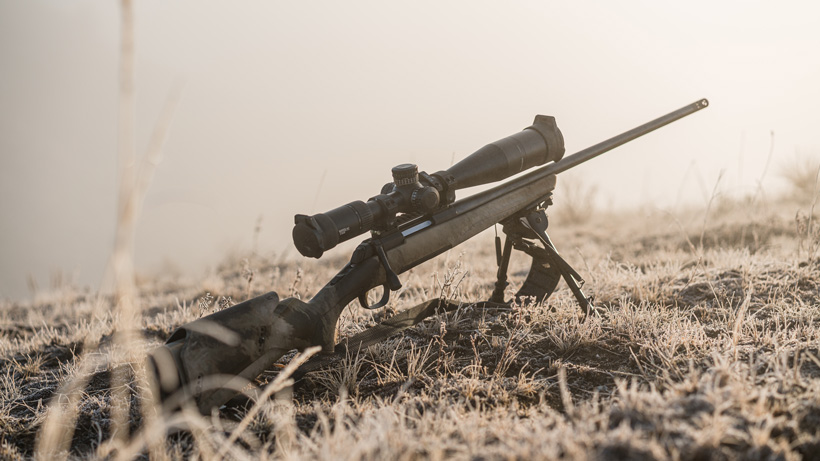 With application season winding down and hunting season right around the corner, the mind of the hunter begins to think about the gear that either made the hunt or cost an opportunity at successfully harvesting. Having a critical eye on my gear list was pivotal for me going into last season. I made several long-overdue upgrades and additions to my gear list. Although I can look at my list and highlight several items that helped me be more successful and comfortable in the field, the upgrading of my riflescope is number one by far.

Although raised in a hunting family, the technological side of hunting for us seemed to stop in the early 90s. We used fixed 3-9x40 scopes that were usually sold as a kit with our rifles. Bipods attached to picatinny rails were not even a thought, levels were for carpentry, not marksmanship, and shooting past 300 yards was damn near considered unsportsmanlike. For a long time that is what everyone around me hunted with and nothing seemed out of place. But this was a farce and ultimately became limiting.

This technical shortcoming came to a head in the fall of 2018 on a solo black bear hunt in the Sierra Nevada mountains of California. Near dusk, I had just about given up glassing a small, high mountain meadow when I spotted the unmistakable, jet-black rump of a bear moseying over a ridge almost 300 yards upwind. With limited time before the legal shooting light ended, I made the risky choice to make a bee-line towards the bear. Cresting the ridge the bear had disappeared over, I stopped and, using a conifer for partial cover, I surveyed the collie-lined landscape. After a few minutes of not turning the bruin up, I was about to call it quits when I looked down into the meadow bottom and located the bear meandering through some tall grass. I quickly made my way to a firm shooting position, with a downhill angle and what I estimated to be 350 yards, I released the safety, racked a round, counted my breaths, settled the crosshairs, and squeezed the trigger. With no reaction from the bear, no sound of a hit, and no other signs of a successful shot, I ejected the cartridge and prepared to shoot again. Thinking I hit low, I held about 3 inches above the vitals and shot. Again, with no reaction from the bear, I made up my mind to not shoot again. The bear moved off to the other side of the meadow and darkness fell. In the AM I would check for blood just to confirm the misses and followed its tracks for a half-mile without signs of distress.

Returning to my home range the next weekend, the rifle verified my worst nightmare. At 350 yards I was low, really low. I regret not confirming that shot distance closer to the season but I had made that shot several times over the past few months in practice. Regardless it is a mistake I will never make again.

I knew I needed a riflescope that would not only increase my effective range, but something not too technologically advanced that I would have difficulty learning to use it. The advances made in riflescope technology have come far in the last twenty years. A mentor of mine, who shoots the latest and greatest, made the analogy that I didn't want to jump from a stock 2000s Dodge Dakota to a brand new 2022 Dodge Ram 2500 with all the bells and whistles. The learning curve would have been too steep for my liking and ultimately would have been a trial of frustration. Finding a scope in between those two was a necessity.

After researching many of the available riflescopes in my budget and asking some of the most successful Western big game hunters I know what riflescopes they use, I decided on the Vortex Strike Eagle 5-25x56 (34mm) EBR-7C MOA. This scope doubled my effective range and gave me the ability to hit steel plates up to 1,000 yards with relative ease (a distance that I would only ever practice at to make close shots that much easier). The faith that comes with being able to hit a target consistently at such a range gave me the trust in my weapon that I had never known. Each sound of the lead hitting the steal validated that I had chosen the right set-up. Not only was I able to hit my target consistently but others who had not practiced with my setup could easily hit bullseyes. This was great for my confidence going into the 2021 season.

If you have never used a riflescope with adjustable turrets, I could not recommend a better scope. Although having several mentors assist me with the set-up and zeroing of this new riflescope, I found the process to be painless and knew what they were doing with a read of the owner’s manual and some YouTube university. That being said, no amount of reading will ever beat out practice behind the rifle. Becoming familiar with this instrument was critical to my success in the field this last season and when it came time to settle the crosshairs on animals, I was able to take one deer at 350 yards and an elk at 550 yards. There is no doubt in my mind that without the upgrade to this riflescope likely both critters would still be on the landscape.

Check out riflescopes in the Gear Shop here