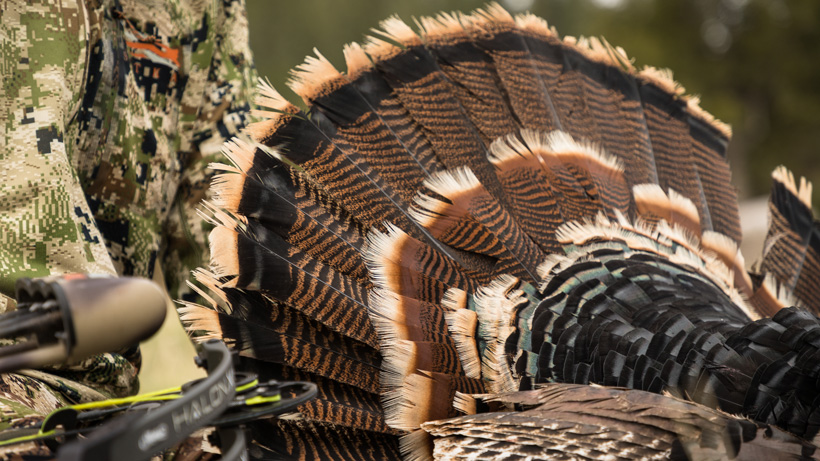 Turkey season is just around the corner and it doesn’t matter if you are hunting Merriams, Rios, Osceolas, Easterns or anything in between, there is an excitement in the air. Soon, even well before the official season starts, toms and jakes will begin to gobble in the early morning hours as the sunlight crests the horizon. Hearing gobbles even months before season will make the hairs on the back of my neck stand up in excitement at the upcoming mornings in the turkey woods. There are numerous tips, tricks and tactics for success and every old turkey hunter has his or her own tactics that they can share; however, overall, there are some basic tactics that if applied correctly can lead to success year after year. Typical of most hunting seasons, every turkey hunt can be successful if you have some preparation, practice, minimal gear and teamwork. Turkey season can be described as the elk season of the spring; the main difference is about 600 lbs.

In my experience, the best and worst turkey hunts start and fail with scouting. Almost every state from Maine to Florida and from New York to California have a turkey population somewhere. Scouting and patterning birds is what puts consistency in your success and will help you not waste those early mornings without seeing any jellyheads. Of course there are always some skeptics that say you don’t need to scout, turkeys are dumb birds and, sometimes, they get lucky; however, take it from me: that is the exception not the norm.

Typical turkey scouting for me in the farm country involves early morning listening and glassing from roads or high points or late afternoon glassing and roosting birds. During the early spring — even well before season — turkeys tend to be out and visible at dawn, midmorning and evenings. Dominant toms are strutting in full view, hoping to catch the attention of whatever hen happens to see them, which is an advantage to us hunters. Spending a few days before season should give you an idea of where birds are and how many hens each tom has with them. The fewer hens, the better your chances are to call him away from them. 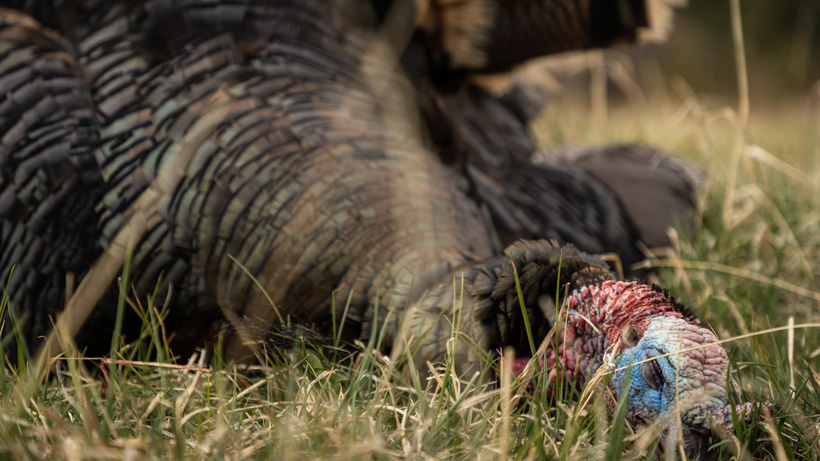 Most people don’t know that similar to ungulates, turkeys can be patterned as well. If left unpressured toms will frequent the same logging road, field or open spot in the woods for around the same amount of time each day depending on weather, hen situation and other circumstances. If you can figure out this pattern, then pick the best ambush spot along this route and call softly if necessary at the appropriate time. If a turkey always struts between 9:30 a.m. and 10:00 a.m. along the same field edge, then get there at first light, but do not loudly crank on a box call all morning long. If you do, you will tell the turkey something is different than yesterday and they might change their pattern. Instead, set up a decoy on the field edge, consider a jake and hen decoy, and when it comes to 10:00 a.m.. if he hasn't shown, then softly purr and cluck as if your tom and hen are content where they are. If that bird is in the area he might come in to check out who is talking and lock onto the visual. Then it is up to you to make the shot count when he comes closer to steal the hen or beat up your jake decoy.

Along with scouting, roosting is the second most important activity a hunter can do to increase their success morning after morning. A lot of times glassing up fields that turkey frequent or driving roads can be successful at spotting birds one hour before sunset. Most of the time turkeys have ventured out throughout the day and when it is time to go to bed for the night have a specific spot or tree in mind and will make a beeline towards that area. At this time, they are not as worried about feeding or breeding, but finding safety for the night. Seeing birds one hour or less before sunset should give you a general idea where these birds are spending their night and where you can go in the morning.

If you are where visibility of the turkey habitat is limited, consider listening quietly for them to gobble or cackle as they fly up the tree for the night. If you are close enough to this area, it is common to hear their wings beating and breaking some small branches as they flap their 20 pound bodies straight up to their roost. If you have never heard this sound, it can best be described similarly to you repeatedly slapping a ball cap against your thigh six or seven times. If you are attempting to listen for birds roosting and the light is waning and all you have heard is silence, then I would suggest a series of owl hoots or crow sounds depending on your area. These sounds can be a great opportunity to get the bird to shock gobble. I have also used an air horn with success, but I don’t suggest it since it’s not as natural of a sound and could spook a bird off the roost if you are too close. 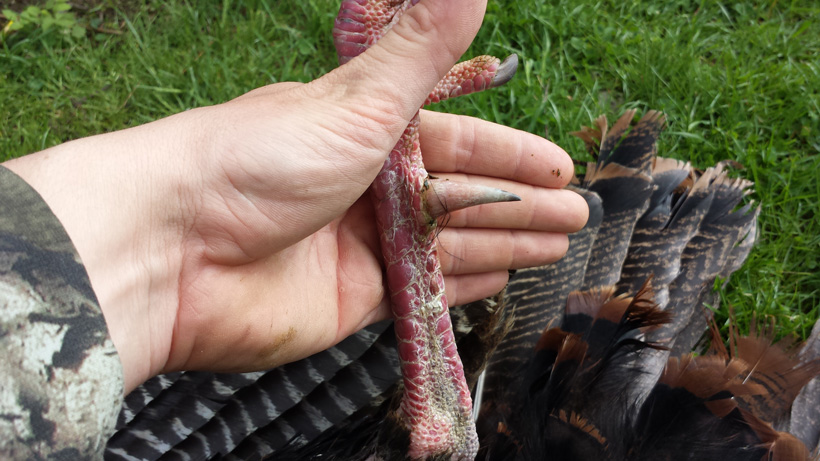 These days people make a lot of fuss over really fancy decoys with motion, moving fans, wobble and other cool inventions. From my experience, these decoys are awesome, but not necessary for you to kill a bird. I have called in hundreds of birds using no decoy or a folding foam decoy we nicknamed “Brenda.” She has no eyes and lost her stake so we use an old arrow shaft to get her up off the ground. Needless to say that although some of these fancy decoys are amazing, you can get it done with a $20 foam decoy from Walmart.

To use a decoy or not is the bigger question than what kind of decoy should be purchased. If I am in the woods and the spring foliage has made visibility limited to 40 or 50 yards I often choose not to use a decoy. The trick is when a gobbler is coming in and you can see him or you hear that he is right on top of you then stop calling. If you need to do something, scratch at the leaves or purr softly. He will keep coming in looking for that hen until he is close enough that it is too late. Numerous times a gobbler will come in and see a decoy and hang up 40 to 50 yards beyond my decoy just out of my eyesight simply making the shot almost impossible. If hunting on a field ege or early in the season when the woods have excellent visibility, I would definitely use a hen or two and a jake decoy. This will entice the tom to either breed or fight; both scenarios will put him in your lap and close enough for a shot. 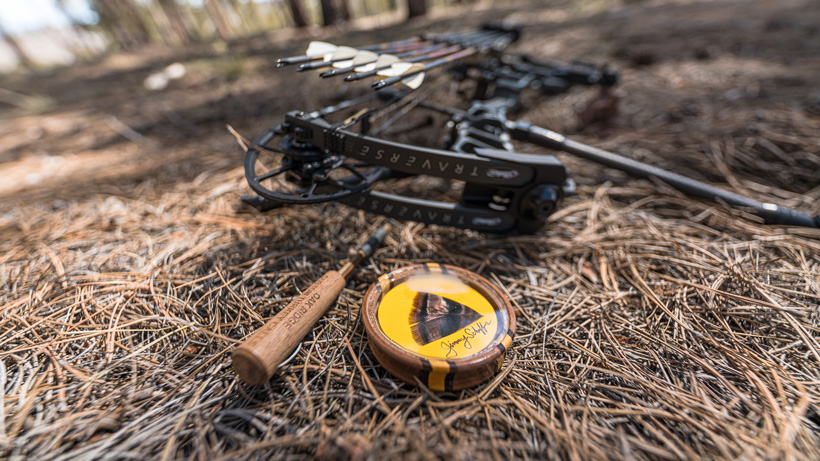 When it comes to calling turkey, my dad always said, “Calling less is more with turkeys,” and 100 times over this has proven true. Turkeys may have a very small brain, but their eyesight and hearing is excellent. If you overcall a bird, they will have you pegged and come in looking right at you. Once a bird is on the hook and coming your direction, it’s time to exercise some patience. I try to never call if a bird is 100 yards or less because he will almost always pin you down and put the brakes on. Having a second person calling is always a good idea if it is an option for you.

The teamwork aspect of turkey hunting is really a blast and some of my best memories with friends are made before most people are awake. The main positive of team calling a bird to a shooter is that a caller sitting 30 to 40 yards behind the shooter can be more aggressive. If I am the caller, I often move back and forth, staying low and out of sight. I scratch the ground, creating a feeding sound, and sometimes move away from a hung up bird. All of these activities bring more life to your setup and could be the exact recipe to bring that tom five or ten more yards into your shooter’s range. If you have three people, you can have two callers and one shooter or two shooters and one caller, depending on the situation. All of these possibilities when it comes to team turkey hunting can make the difference and can change in a moment's notice. It is important to let one member of the hunting group, usually, the shooter, make the call as to what the plan is and where to sit. Ultimately, it is his or her opportunity and, sometimes, moving 20 yards closer or farther away as a gobbler who is coming in can make all the difference in the world and fill your tag or not. 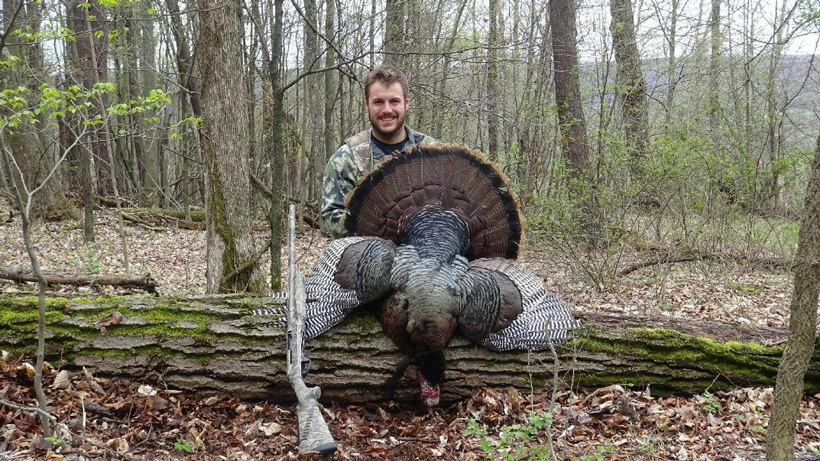 Turkey hunting is one of my favorite times of the year and signifies the start of spring as the forest begins to blossom and migratory birds come back to the area. The main reason I think turkey hunting is a blast is that it is a hunt of strategy and response from an animal. It is a hunt that has the opportunity to be a group activity that can be done before work for a lot of people — not to mention turkey are excellent eating. To be successful year after year, hunters need to know the basics of scouting, roosting, decoys and calling, but, most importantly, hunters need to put time in the woods. When turkey hunting, even the most experienced hunters make mistakes and move or don’t move, call too much or too little, get too close to the roosting tree or do one of the hundreds of things that may or may not be the right move. Consistent success requires dedication and time, but tagging a bird can be accomplished by anyone willing to try. Even if success is not obtained in the form of a tag on a bird, there can still be success found with the morning sunrises, the woods waking up around you and comradery with good friends. For another look at spring turkey opportunities in the west be sure to check out this article, Additional chances to hunt the kings of spring.