Three Reasons Why Backpack Hunters Need To Own A Dehydrator 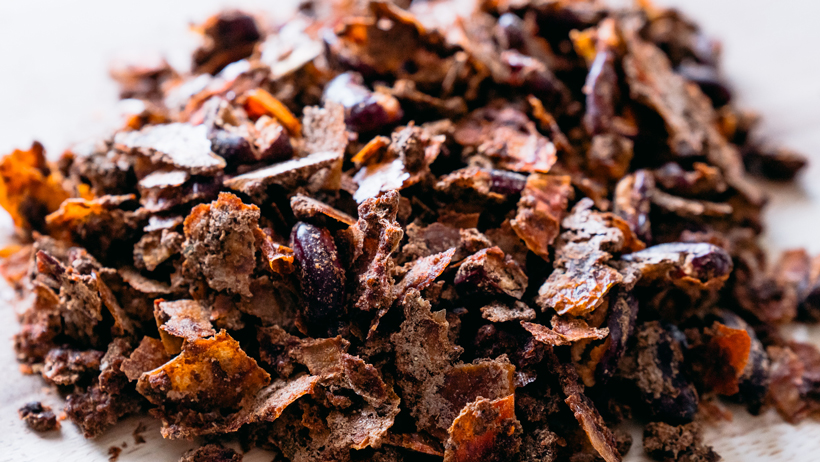 When my wife and I first moved into our house 10+ years ago, we were graciously sent home with all sorts of gifts from family and friends. Everything from furniture to food for our empty pantry. A lot of these things were put to great use, especially food, but some stuff just got lost in the abyss of our garage. One of those items that fell victim to being forgotten was a dehydrator that my mom gave me. I had never had any interest in owning one, but as a new homeowner who really didn’t own much of anything, I took it home with us. It never got used and ended up being sold in a garage sale shortly after. Looking back now, there is a part of me that wishes I had kept it. As I sit here today, my wife and I use a dehydrator on a regular basis. Owning one isn’t even a debate for us, especially with me being a backpack hunter. Here’s why. 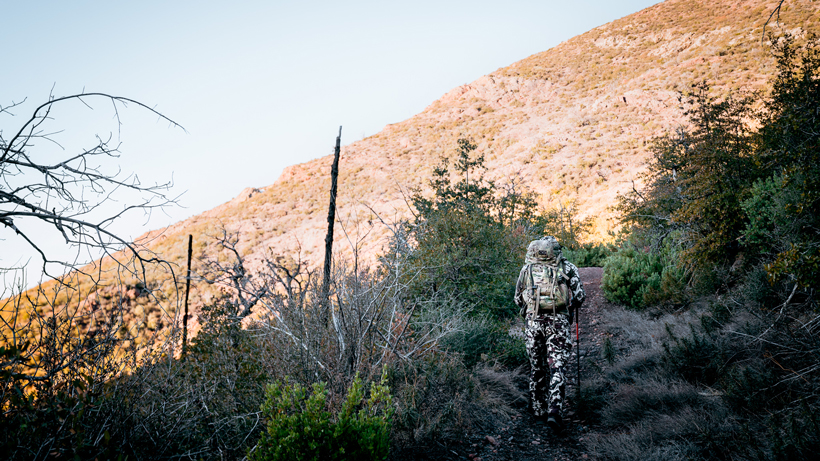 When I broke down and bought my first dehydrator, I remember setting time aside to learn how to use it when we got home. I planned to sit down with the directions and learn how to operate this new piece of machinery. After the fact, I was both pleased and disappointed in a way. The disappointment came from the fact that there really weren’t many directions at all. Plug it in, set the desired temperature and turn it on. “That’s it?” I said. Yup, that’s all it takes to operate a dehydrator, which led to me being pleased about the whole thing. This was truly a “set it and forget it” piece of equipment. The starting line and finish line are the same no matter what temperature you set the thing to. Lower temperatures will, of course, mean longer run times to dehydrate things, but that’s the only variable. Someone isn’t going to “over dehydrate” something. The subtitle says it all. They are idiot proof and perfect for folks who are short on time, but looking to make some healthier types of snacks and/or meals they can stow away.

In today’s day and age, people seem to be more concerned about their health than ever. More folks are questioning what they are putting into their bodies and a dehydrator can help with that. It gives you the ability to prepare and preserve healthy snacks and meals and avoid running to the nearest burger joint. Not to mention food for hunting trips and backpack hunting trips especially. Too often, I’ve taken the easy route and shoved a bunch of sugar junk in my backpack. A person can only handle so much of that and easy routes aren’t always the best routes. 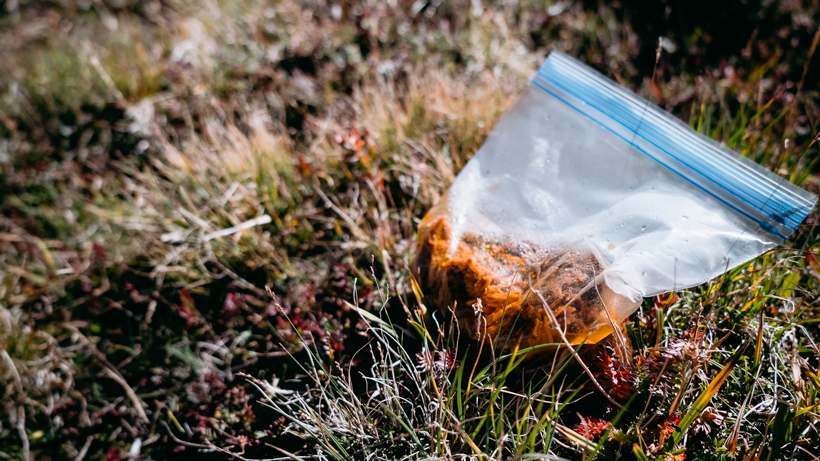 You can really go nuts here with different foods to dehydrate like dehydrated apple slices, jerky,and fruit leathers — these are a few favorites worth mentioning. Sprinkle some cinnamon on those apples in the dehydrator to spice ‘em up. Bring along a packet of almond butter to go along with them in the field and you’ve got one heck of a snack. I did that last year and loved every second of it.

You can even make their own dehydrated dinners. I’ve had success doing so with chili and spaghetti, those being my personal favorites. Spread the meal thin on your dehydrator trays and let the machine run until the food is nice and crispy (chili can take anywhere from eight to 12 hours). When it is all done, throw it in a mylar bag or even just freezer Ziplocs for storage. Once in the field, just boil up your water and pour it right into the bag. I usually leave it for about 20 minutes to rehydrate. Now, you’ve got a home cooked meal in the backcountry. You’ll just flat out eat better owning a dehydrator and putting it to use. 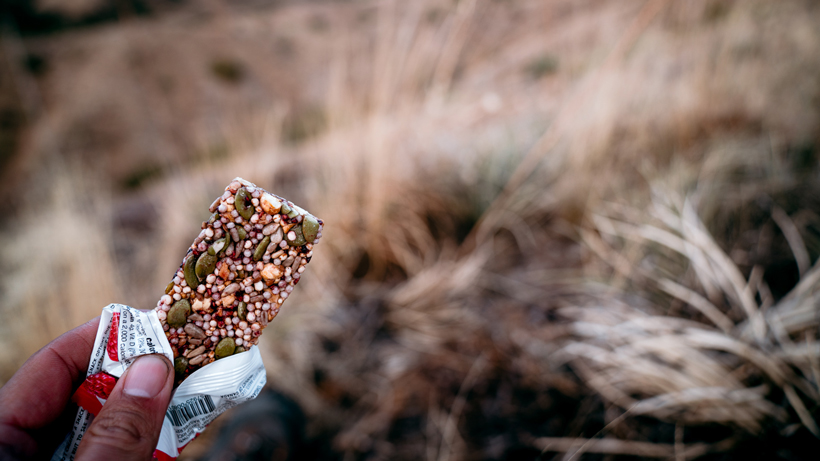 Everything seems to get more and more expensive with each passing year. From food to gas to hunting gear, the numbers add up over time. Putting a dehydrator to work can absolutely help save some coin in the food department, whether we’re talking in the field or at home.

Next to gas, tags and any gear purchases, food is the biggest ticket item on a backpack hunt. The number will fluctuate with each individual, but it’s definitely not something to disregard. Let’s take a look at bars as they are a popular snack among backpack hunters. The average price for a bar is between $1.50 and $3.50. That doesn’t sound like a lot, but eat five to eight bars a day for a week and it starts to. By taking the time to cut up some fruit or make some jerky at home beforehand, you’ll decrease your snack bill significantly. All with the flip of a switch on your dehydrator.

How about dinners? Freeze dried/dehydrated meals sit between $10 to $15 per meal. So, for a 10-day hunt, you’re looking at between $100 to $150 just in dinners. For the price of two pounds of ground meat (hopefully wild game from your freezer for free) and some other simple ingredients, a person can make a pot of chili for about $15 if they’ve already got the meat. That pot of chili will yield in upwards of five to eight servings. That’s five to eight dinners that you can dehydrate for your hunt — more than half the dinners for a 10-day hunt for the price of one you’d buy from a store. Spend less on food and spend more on tags to go hunting. 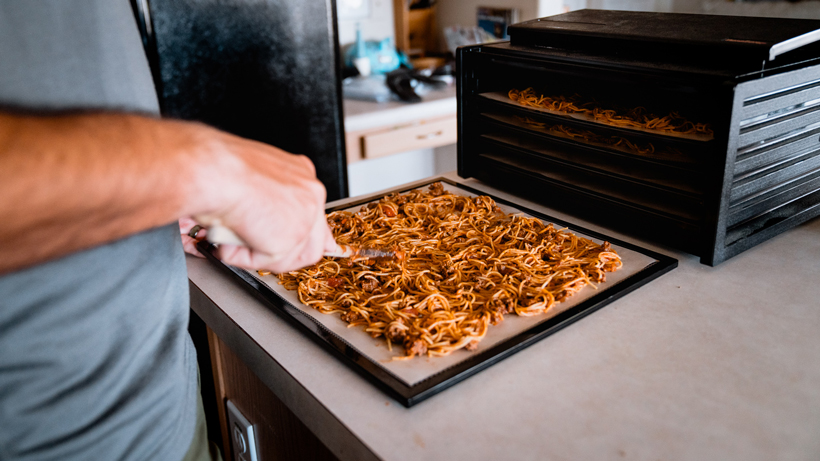 The first time I ever dehydrated my own food for a backpack hunt was during the spring. I packed into a new area solo for the night with a bear tag in my pocket. Sitting in my glassing spot that evening, eating bear chili that I made at home from a bear that I shot the previous year while glassing for bears was the epitome of “full circle.” Not to mention, I knew exactly what was in my dinner as far as ingredients go. There wasn’t anything in there that you would have trouble pronouncing and I felt great afterwards. Nowadays, I try to always put the dehydrator to work before season for both dinners and snacks. As I do that, I often wonder who ended up with that old dehydrator my mom gave us. If they’re a hunter, maybe they’ll read this and fire it up for their next adventure.