Three questions to ask yourself while making a stalk 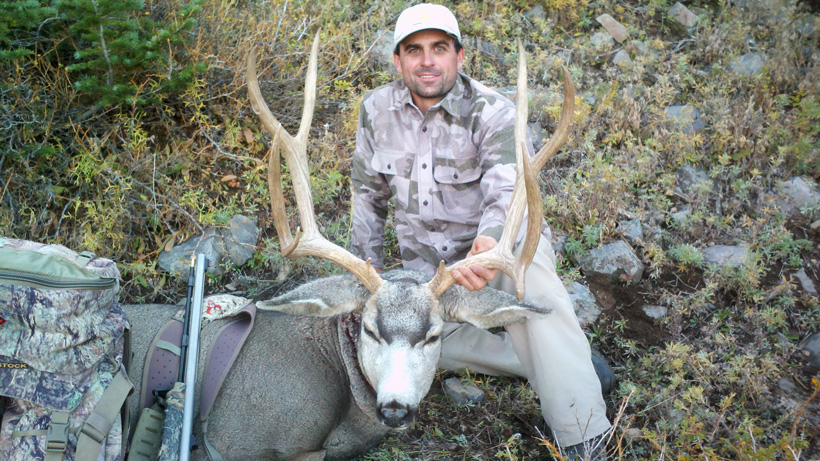 I’ve always considered myself to be an aggressive hunter—at times daring the animal I’m after to make a mistake before I do, squeezing every opportunity out of a perceived advantage I have in a given situation. It’s a strategy that has worked well over the years as I’ve got a decent trophy wall at home, but, if I’m being 100% honest, there have been times when I was too aggressive and blew opportunities not only for myself, but for my hunting partners as well— namely my own father (sorry, Dad)!

We spent an entire day closing the distance to a group of bachelor bucks during a Utah muzzleloader hunt. We spotted the bucks early in the morning just after first light and, at the time, they were above us, just below the top of the basin we were hunting, toeing the line between deep timber and a large open sagebrush face. Over the course of the next several hours, we were able to close the distance from what was surely a mile to just over 200 yards. We came up a drainage that had been eroded over many years where, at the bottom, we could stand and walk while staying out of sight from watchful eyes.

As we crept out of the drainage—in full army crawl—the bucks, one by one, fed into range with the largest being a well-rounded 4-point. We estimated him to be 32” wide and roughly scored him at somewhere in the mid 180s—a great buck! As is all too common, some sort of 18th sense (haha) alerted the deer to our presence and they bumped over a ridge and out of sight. We were certain they wouldn’t go far and began to come around the same ridge while maintaining the same 200-yard gap.

As we came around the corner, the bucks had settled down and were back feeding. In an effort to help my dad, I quickly jumped to the front, pushing the pace, trying to find a suitable location from which my dad could shoot—I so badly wanted to help him get the 4-point. I had convinced myself that moving quickly would give us enough time to set up and shoot before they bumped again. Of course I was wrong and had gotten so far ahead of my dad that, by the time he reached my location, the deer were off and running. Incredibly distraught at the opportunity I had cost my dad, I’ve reflected on that moment over and over again and it still bothers me to this very day. I’ve come to understand—in my now older age—that what I thought was aggression was really a lack of patience.

Why was I so hell-bent on getting ahead of my dad, pushing the pace and finding a great spot where my dad could set up and shoot? Patience is all too often an overlooked component to hunting. Just ask any newlywed or new parent and they’ll surely tell you that patience—even though it’s cliche—is truly a virtue. It’s a virtue when it comes to hunting as well. The excitement that comes from being in the moment, when the hunt is on, is something we can all relate to and we’ve likely all made a move from being impatient that has cost us the opportunity at an animal.

Three questions to ask ourselves when the hunt is on:

1. Will I have another opportunity at this animal if I back out?

I have found that rarely the answer to that question is no. If you have time to hunt you can almost always locate an animal a second time, especially if the animal hasn’t been pushed/spooked from the area. If you are out of time, perhaps a more direct approach is appropriate.

2. If I slow down will I lose the opportunity at the animal?

Again, the answer is almost always no. It’s easy to impose some type of timeline that leads us to believe we only have a few minutes to “seal the deal” when, in reality, time is often on our side and the more you believe that, the better you’ll sneak because you’ll know you have the time needed to move slowly.

3. Will I gain an advantage making a move when the location of the animal is uncertain?

Once again, the answer is almost always no. It’s incredibly easy to feel a bit of panic when an animal heads to an uncertain destination, but almost never do we better our chances without knowing the location of the animal. Just stay put and, as long as you’ve not spooked the animal, it’ll come back out again.

On a recent hunt, I was able to put into play question three; will I gain an advantage making a move when the location of the animal is uncertain? It was the third day of the Utah muzzleloader hunt and me and my good hunting buddy had packed into an area and set up camp just below a large basin. The basin was something dreams are made of. It had a large heavy timber pocket on the southern side of the canyon that filtered into smaller jack pines as the canyon wall headed north and lower into the basin. The back of the basin was covered in sagebrush and a lot of rocky ledges where I was convinced deer would be bedded. The lower bowl was full of buckbrush, sagebrush and open grassy flats; there was even a small spring that ran down the drainage. We woke well before sun up on the fourth morning of the hunt and made our way to a vantage point that allowed us to see the entire basin.

Right away there was activity with several smaller bucks feeding near the spring and taking their morning drink. A nice 4-point came into view on the far side of the basin that deserved a second look but we decided to wait as the day was young. After an hour or so had passed, we decided the 4-point we had previously seen was worth going after. As we stood to make our play—he was still up feeding in the sagebrush—I saw movement at the top of the basin coming through the rocky ledges, absolutely flying down the mountain. I got my binoculars up with just enough time to see he was a great buck. I whispered to my buddy, “That was one of the tallest bucks I have ever seen. He had to be 25” tall.” Our focus immediately switched from the nice 4-point to the fellow I saw flying down the mountain. It was obvious something had spooked him and he was heading for the timber to seek cover. We quickly made a plan to go around the heavy timber, leaving the basin entirely.

We then come back into our basin using the same route as the buck. Our thought was that we might be able to see through a few rows of timber to where he was held up and use elevation to our advantage. After a couple of hours, we reached the saddle he came over, crawled over the edge and ever so carefully began to glass every nook and cranny of the timber, hoping to see an ear, an antler or tail—anything to give up his location. Several hours had passed and we hadn’t seen a thing. The sun was well in the sky at this point and the heat was definitely wearing on us, but, undeterred, I was convinced that the buck had held up in the timber. We spent the entire day in that saddle waiting, hoping the buck would come out.

On several occasions, I was tempted to move towards the timber to gain a better vantage of the jack pines and even though that my buddy and I could make a push through the timber and force the buck to come out. Because we didn’t know exactly where he was I decided to continue to play the waiting game. It was now evening time and it wouldn’t be long until we were out of daylight. I was seriously starting to question my decision to stay put, be patient and let the buck show himself again.

We finally and begrudgingly decided it was time to move to peek into an adjacent basin before the sun was gone. As we stood up, I whispered, “Let me have one more look.” Would you believe that in 30-second window the buck finally showed himself? I made a quick plan to use the timber as cover and work my way down the edge and into the jack pines where I thought I could get a shot. I reached the jack pines without issue; the dirt was moist, making almost no noise and the wind was very cooperative. I pulled my binoculars out and quickly found the buck. I then ranged him at a comfortable 168 yards. I could see from his shoulders up and buried the pin right at the base of his head and pulled the trigger. Before the smoke had even cleared I could hear my buddy hollering from the top of the basin and I knew I had made a good shot. Patience ruled that day and the buck has since turned into one the prettiest European mounts on my wall.

With the draw results out across the west, I’ve promised myself not to make the same mistakes from prior years. And who knows, maybe this is the year we’ll finally get my dad past the 200” mark. Slow down, breathe and logically analyze the situation while asking yourself the three questions listed above. It just might help you take home the animal you’ve been after.