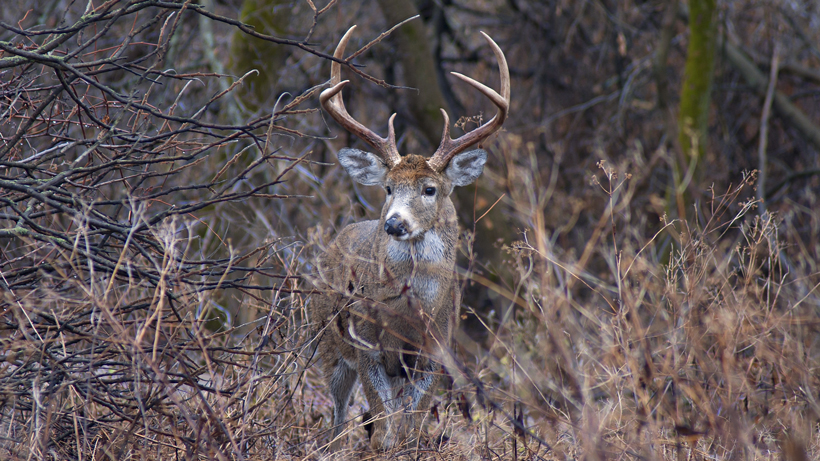 Whether you are chasing whitetails with a bow, muzzleloader or rifle, there can be some great challenges to overcome — even if you are lucky enough to hunt on private land. These challenges come from whitetail behavior, changes in their patterns, hunting pressure and landowner boundaries. Learning how to overcome these challenges and hunt creatively will be the difference between you coming home with a buck in the back of your truck or tag soup on the menu. Below are some early, mid and rifle season tactics to hunt whitetail bucks on public and private land.

Early season: when food is king

When it comes to early season, the most important thing by far is finding the best food source that many bucks — or at least the biggest bucks — are frequenting. Most of the time these bucks are found on private land in some of the most lush agriculture there is. If you can gain private land permission to hunt this area that is the ideal situation; however, if you cannot, there are still plays that work, depending on the situation. First off, if private land permission is gained, then try to pinpoint where the buck is exiting and entering the agriculture. Next, head behind that and hang a treestand downwind of the travel corridor. If you cannot get private land permission, then you must determine if there is a chance that this buck is bedding on public land that is adjacent or approach a different land landowner who might give you permission. Some bucks might bed 100 yards from their feed — just inside the cover — while other bucks might travel a mile or more to prime bedding areas. Overall, you want to find a spot on private or public land between the food and the buck’s bed. If you can be there, you will have an excellent shot at harvesting the buck you are chasing.

When speaking of mid-season, I am referring to the time after the early season. This is when the weather is getting cold, agricultural fields are harvested and the rut may or may not be underway. Early on in mid-season, bucks might be making rubs and scrapes, but chasing and rutting has not turned on full blast just yet. They may still be using the same agriculture fields or they may have switched to different ones for various reasons. Your job during this time of year is to hunt the fresh sign from the downwind side. The hunting is starting to get good and anything is possible during the mid-season. Bucks may adventure off of private land during this time of year in order to start checking for receptive does. If you have private land permission, then hunt between food and bedding along fresh scrape lines; however, if you do not, then hunt the fringe of private land. Hunting the fringe or edge of private land can be effective, especially when doing some rattling and grunting sequences. As the rut increases and bucks begin to cruise and chase more and more, you can change your strategy from hunting around food to hunting near bedding areas and pinch points. You are trying to find spots that bucks will go in search of does or spots that they will be funneled through naturally while searching or chasing does. If they find a doe that seems to be coming into heat they may harass her throughout the day, which will cause the doe and the buck to move through a pinch point, and, hopefully, you are there waiting.

Whether rifle season is during the rut in your state or not, you can still treat it the same. Try to hunt on pinch points, saddles or escape routes, especially during the opening weekend of season when deer are the most pressured. Hunting on private land can be very effective though hunting on public land escape routes near the same private land can be just as good. Whitetails are skittish animals and it will only take a gunshot or two to get them off of their summer and fall home and into the sagebrush public land that surrounds it. I have also had very good luck still hunting the public land around private property a few days after the season opener. Time and time again, I have found that bucks that escape the pressure on private land will cross the boundary line and bed down in a place where they feel safe — even if it is public land. If you take your time and keep the wind in your face, you can really have a good chance at harvesting a buck by walking public land that surrounds prime private land.

Hunting whitetails in the West can be a challenge and a blast no matter when you chase them. Though they do not inhabit every mountain and basin they are in good numbers along the river bottoms and near agriculture fields. If hunting early season, you will have to rely on patterning deer as they head from food to bedding and back. Once the rut starts, the bucks will change their patterns and can be easier to call in; however, wind direction and proximity to their areas will still be super important. By the time the rifle season starts, any escape corridors or hard to get to spots would be a perfect place to be sitting on or off of private land. If you can get private land permission, then you will be in great shape, but if you can’t, then hunt the adjacent public land and wait for a buck to make a mistake. Sometimes, this can happen organically and, sometimes, another hunter on private land helps push a deer to you. Either way, chase some whitetails this fall and bring home some venison and a nice rack as well.