Off season hunting opportunities: The islands of Hawaii 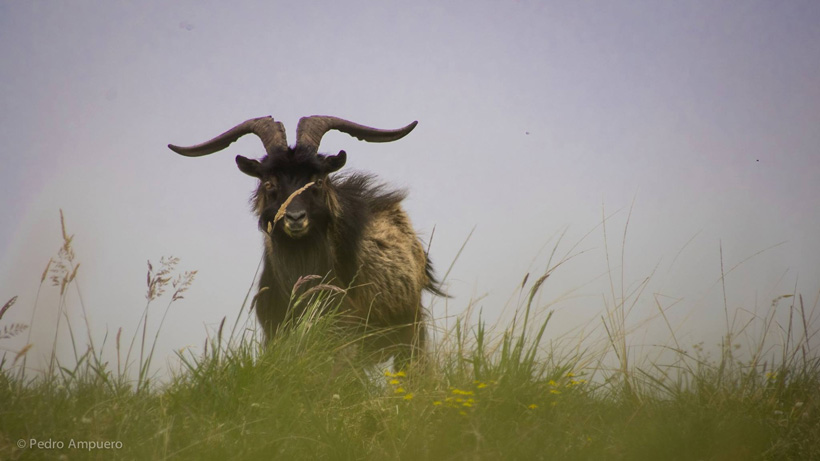 Winter and early spring tend to be a really slow time for hunting. Finding things to break the monotony and cabin fever can be a struggle this time of year. Sure, you can test new equipment, practice, exercise, and think about what hunts to go on next season, but why not keep those skills honed the best way there is... in the field, chasing big game animals. Hunting in Hawaii is an exciting way to escape the winter lull and get in the field while enjoying sunshine and mild temperatures. Hunting in the tropical islands can be surprisingly affordable and a great way to keep those hunting skills on point. Often times, harvesting an animal in Hawaii doesn’t require weeks of hitting the hills; only a couple of days can be sufficient time to bring home one of these exotic trophies. Game animals on the Hawaiian Islands see less hunting pressure and have few natural predators, which means that they tend to be a bit more docile than the ones we see locally. A family vacation with a few days scheduled in to do some hunting is a great way to keep the spouse and kids smiling and still sneak out for a little hunting time. 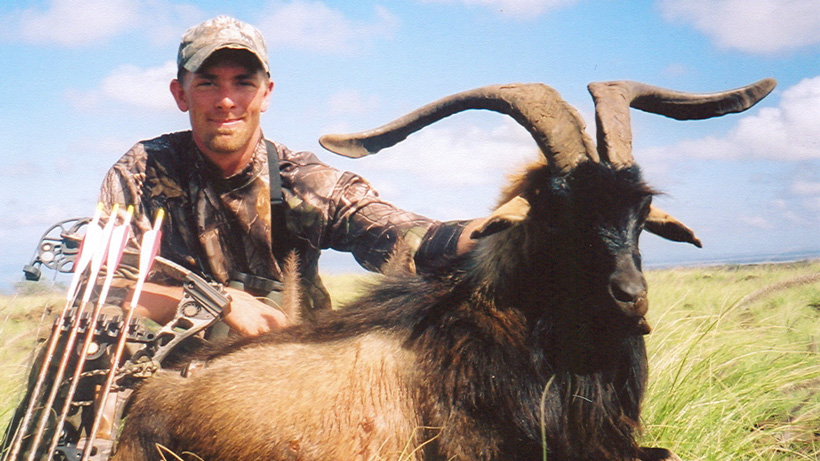 Eric Baler with an archery Spanish goat from Hawaii.

It may be a surprise to some, but there are actually many species of big game animals available to hunt on the islands including feral pigs, mouflon sheep, feral sheep, mouflon-feral hybrids (often called black Hawaiian sheep), axis deer, blacktailed deer and feral goats. Most hunting is done by spot and stalk and temperatures are typically in the 70’s and 80’s during the day. The terrain varies from mild rolling hills to steep rugged country and cliffs. The windward sides of the islands tend to receive the most moisture and vegetation can be very rainforest-like and dense. 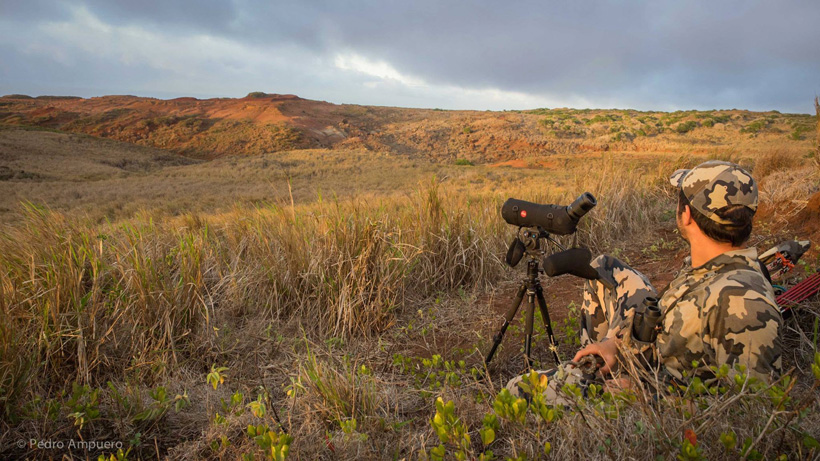 The leeward sides of the islands are less vegetated and can even become so dry that they resemble a desert. Be aware that elevation changes can also be extreme, with everything from sea level up to 13,800 feet at the peak of Mauna Kea on the island of Hawaii. Whatever island you decide to hunt, you should never need much more than a t-shirt, which is a nice break from the snow and cold of the mainland U.S.

The biggest expense when traveling to Hawaii is airfare and lodging. Watching ticket brokers, such as Expedia and Orbitz, or booking through a travel agent is the best way to find airline and lodging packages for cheap. Make sure to get a hunter education letter of exemption before your trip so that you can purchase a hunting license. You can print the letter of exemption form, fill it out and return it to the appropriate address. 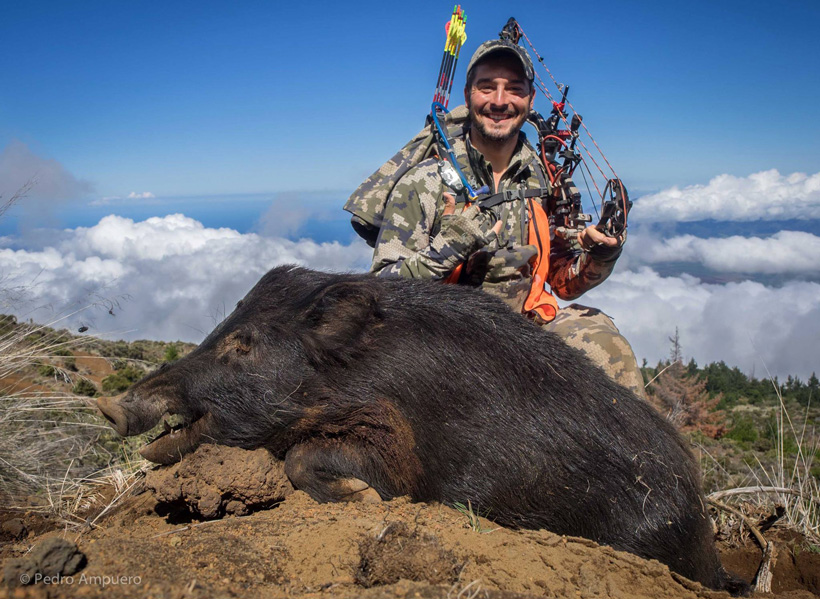 Once you have completed the letter of exemption, you can then purchase your hunting license and tags. A nonresident hunting license will cost $95. In addition to the license, you will need to purchase a conservation stamp for $10 as well as game tags that cost $25 per species, except for Lanai mouflon sheep and axis deer tags which will cost $125 each. The Hawaiian Islands also have a healthy population of Rio Grande turkeys that can be hunted with the purchase of a $20 tag. A game bird stamp can also be purchased for $10, which enables you to hunt upland game birds. If you plan to hunt using a firearm, take the appropriate steps in acquiring airline permits prior to travel. Logistics behind meat care as well as transport of the meat and hide/head will also need to be taken into consideration. Good guides should be able to take care of this for you. Through the use of my guide, I was able to donate the meat from my animals to a local charity. The taxidermy preparation and shipping of the heads was easy since he took care of most of it. The next decision you will need to make is whether to hire a guide or do it yourself.

* Free to all Hawaii residents 65 years or older and to all persons with Hansen's disease who are residents of Kalaupapa, Molokai. 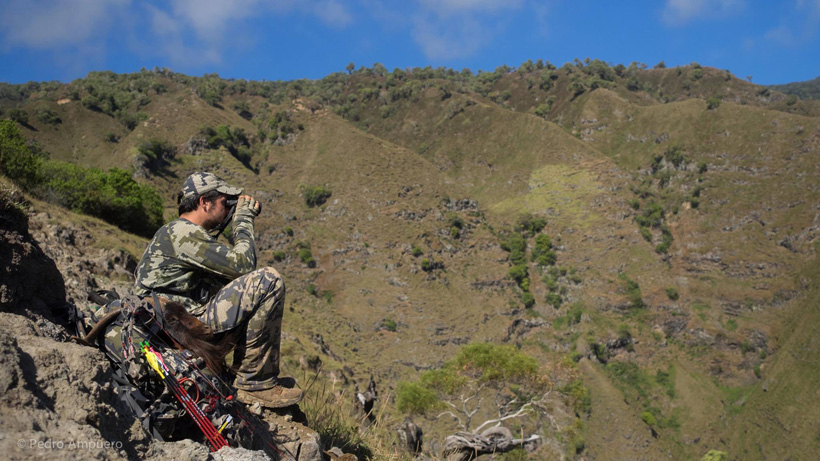 All of the islands have designated public hunting areas that can be hunted without the use of a guide. Gaining access to most private land will require hiring a guide that has the hunting rights to the land. Public land can be less expensive since it could save you from hiring a guide or paying access fees to private land. The downside of public land is that open hunting days is regulated by the state and often times there are only two or three days each week when hunting is allowed. Additionally, the pressure on public land will be greater and the animals that live in these areas are often much more wary from the additional hunting pressures.

Private land will be a little more expensive to hunt but will allow you access to some of the best areas, which enables you to hunt animals that receive much less hunting pressure. Trophy quality is typically higher on leased private land since hunter numbers and harvests are more tightly regulated. Hunter orange is also required on public land except in archery only areas, and there are no hunter orange requirements established for private land. There are many licensed outfitters in Hawaii, but make your selection carefully because not all outfitters are created equal. Be sure to do your own research and follow up with references that have used these guides in the past. Finally, choose the species you are most interested in and what island they can be found. 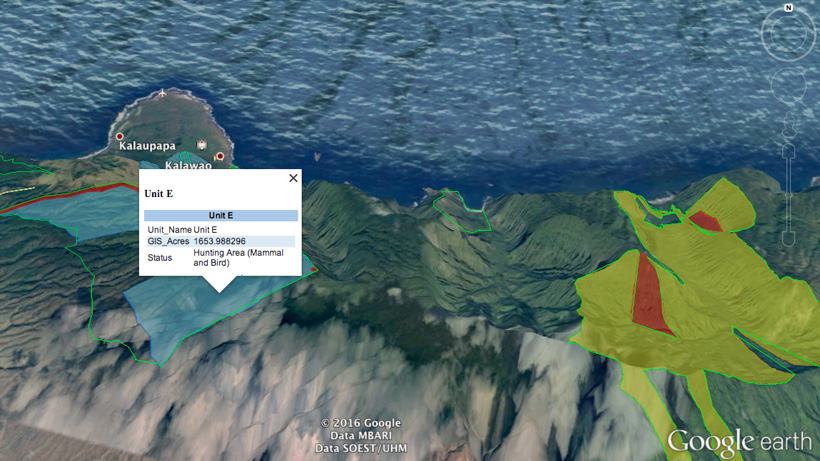 For scouting and researching units in Hawaii, you can download some great Google Earth .KMZ layers below. 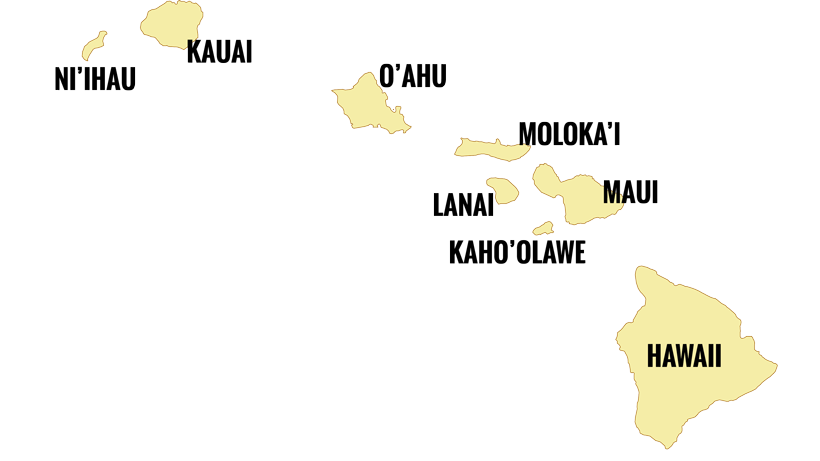 Hawaii has eight islands, but hunting is only allowed on six islands. Each island holds a unique landscape and population of big game that can be hunted. Seasons, public hunting areas, legal hunting days, bag limits, and other specific rules all vary between islands. This is why it is important to thoroughly research the island you plan to visit. A map of public hunting areas can be found online. 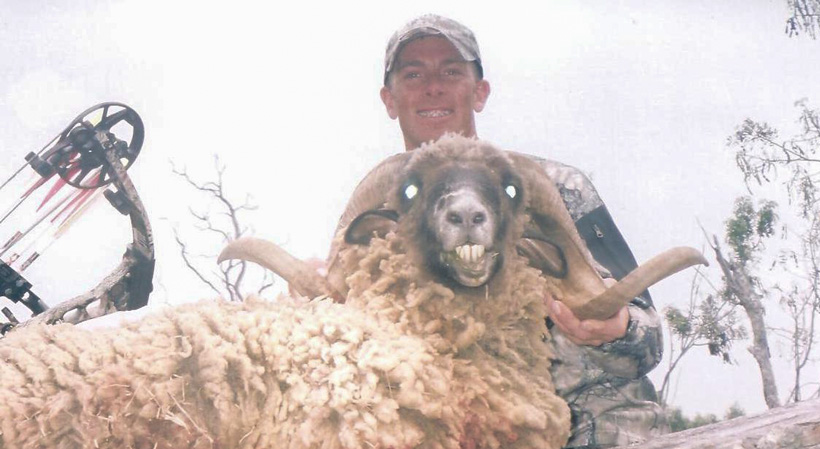 Many areas of the islands can be rugged with dense vegetation; a knowledgeable guide could prove to be a great asset when traveling to Hawaii. If you decide not to hire a guide, a good GPS unit is a must in order to stay within unit boundaries and avoid trespassing onto private lands.

The island of Hawaii offers feral pigs, mouflon sheep, feral sheep, black Hawaiian sheep, feral goats, and wild turkeys. Hawaii offers eleven public hunting areas around the island that are labeled as Units A through K. Most units are only open to hunting on Saturday, Sunday and state holidays with the exception of A, B, G, and K which are open daily during legal seasons. Several of the units offer year-round seasons with varying bag limits and weapon restrictions. Unit E is an archery only unit; legal weapons vary throughout the rest of the units. Day and season bag limits as well as legal weapon varies greatly between units so check the regulations carefully. 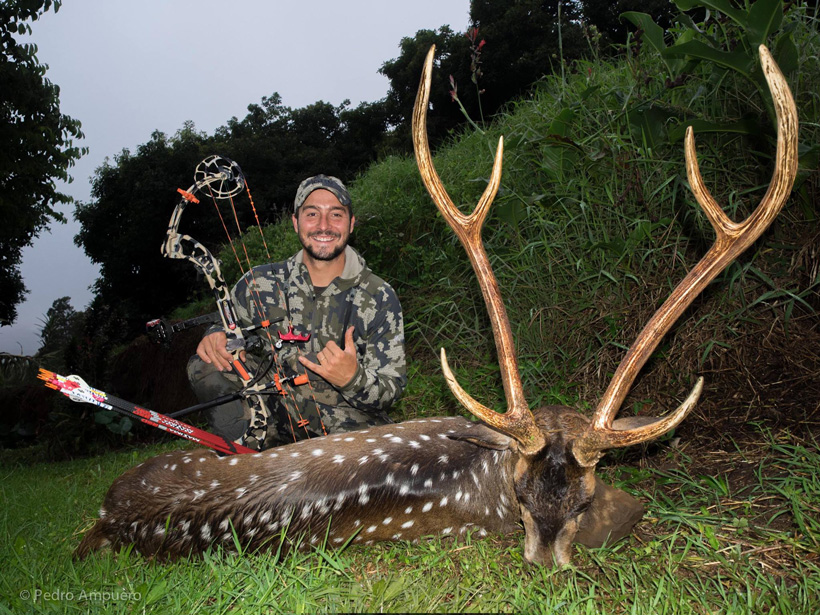 The island of Maui offers feral pigs, axis deer, feral goats, and wild turkeys. Six public hunting units, which are designated with letters from A to F, are open to hunting during legal seasons and days. Unit A is open daily and year-round for feral pigs and feral goats. Unit C is open year-round and daily for feral goats, but February through June, Unit C is only open Saturdays, Sundays, and state holidays for feral pigs. Unit E is an archery only unit which is open year-round and daily for feral pigs. The remaining units are open to hunting on Saturdays, Sundays and state holidays with some season restrictions. Bag limits are two pigs and two goats of either sex per day except Unit C where two goats and one pig can be taken per day. Unit C and D are the ones too look at for higher concentrations of game. 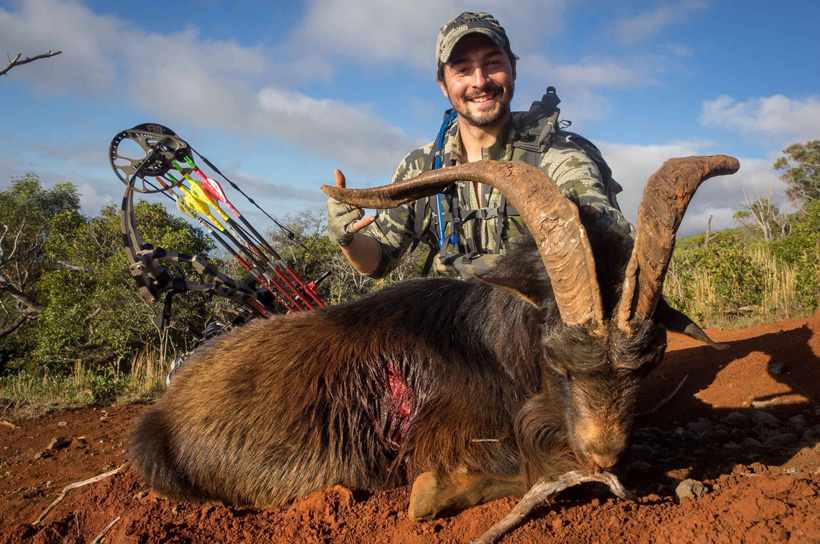 Other units are too thick so the best hunting would be for pigs using dogs. Keep in mind that there are practically no deer or turkey on public lands in Maui. If you find some you can consider yourself extremely lucky. 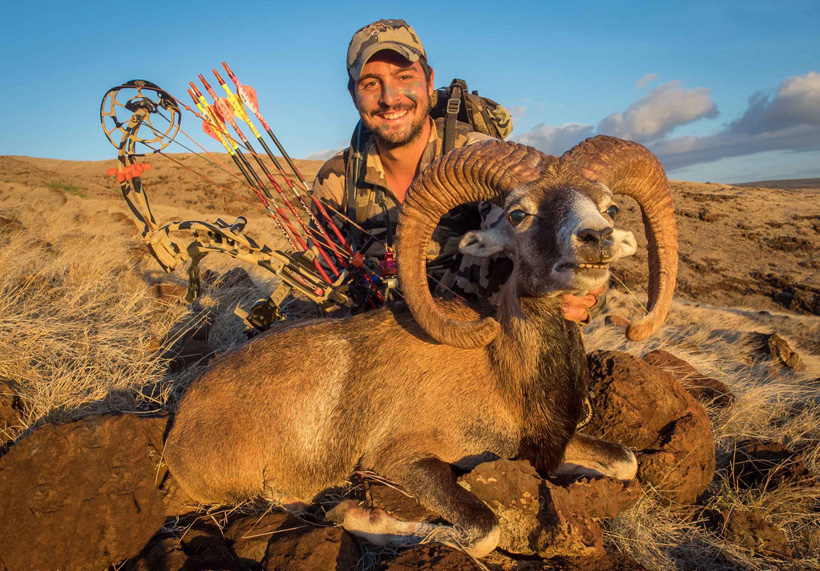 The island of Lanai offers mouflon sheep, axis deer, and wild turkeys. The island has three public hunting areas numbered 1 to 3 where both mouflon and axis deer can be found. Unit 3 is an archery only unit where big game hunting is restricted for safety reasons. Units 1 and 2 offer several seasons for firearm, archery, and youth hunters. Season dates and open hunting days vary between species and hunt weapon type. Check the regulations and rules closely prior to traveling to this island. The bag limit is one deer and one sheep per person per year in all units. You have to draw a tag for the deer hunt on Lanai on public land and the same is true for mouflon. There is a private area in Lanai that can you hunt year round after you get permission to hunt it.

The island of Molokai offers feral pigs, axis deer, feral goats, and wild turkeys. There are five public hunting units on Molokai that are labeled A through E. Axis deer, pigs and goats can be hunted on any of the five units using rifles, shotguns or archery equipment. Units A and B are open to hunting year round on Saturdays, Sundays and state holidays. Units C through E are open to hunting February through October on Saturdays, Sundays and state holidays. Bag limits for all units are two goats and two pigs per day with no season bag limits.

The Island of Kauai offers hunting for feral pigs, feral goats, and black-tail deer. The island has thirteen public hunting areas divided into units and sub-units labeled A through L. Most units offer all three species but season dates, method of take, bag limits and legal hunting days vary greatly between units. Diligently checking the regulations for season dates, legal days, and weapon choice is a must for Kauai. Much of the island of Kauai is rugged country with dense cover so I highly recommend contacting the Hawaii Division of Forestry and Wildlife (DOFAW) for maps and unit boundaries well in advance of travel. Hiring a guide could also be beneficial on this island.

From what I have learned and what a guide has told me, January through April tends to be the best time to hunt Hawaii. Also, because many areas are open year-round and the weather in Hawaii is pretty consistent, so it really doesn't make a big difference on timing unless you are looking for strutting turkeys. Don’t be afraid to push yourself out of your comfort zone in search of a place to hunt this off season. A family vacation with a few days scheduled in to do some hunting is all you need. Hawaii is a great state to visit and there really is no better way to spend the off season!