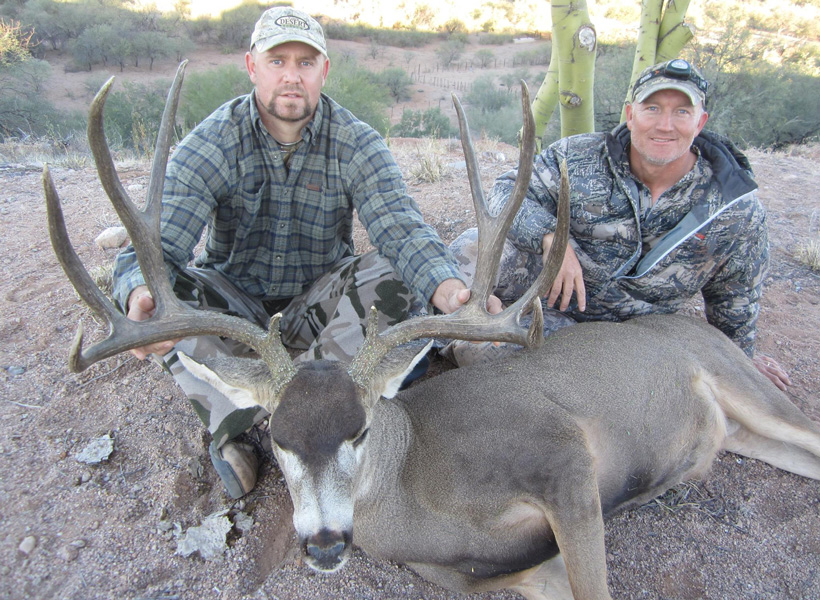 Greg Krogh is the owner and operator of Mogollon Rim Outfitters in Chino Valley, Arizona. With over 30 years of outfitting experience, Greg is renown for finding and harvesting some the biggest bucks and bulls in the west each fall. He has guided both the state typical and nontypical archery bulls in Nevada. He also personally harvested the archery state record typical mule deer in Nevada in 2004, which stood as a record for ten years. We took some time to sit down with Greg and talk with him about some of his secrets to success. 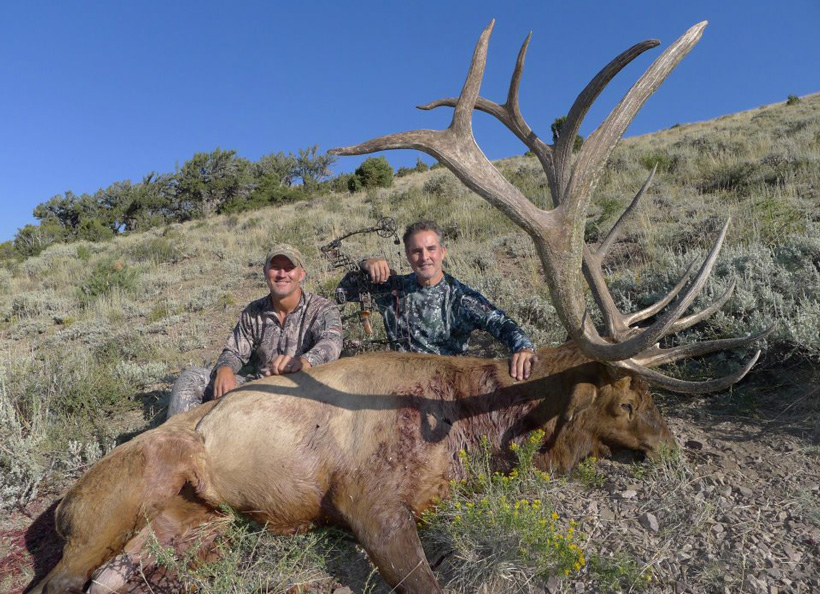 How did you get started in the outfitter business? 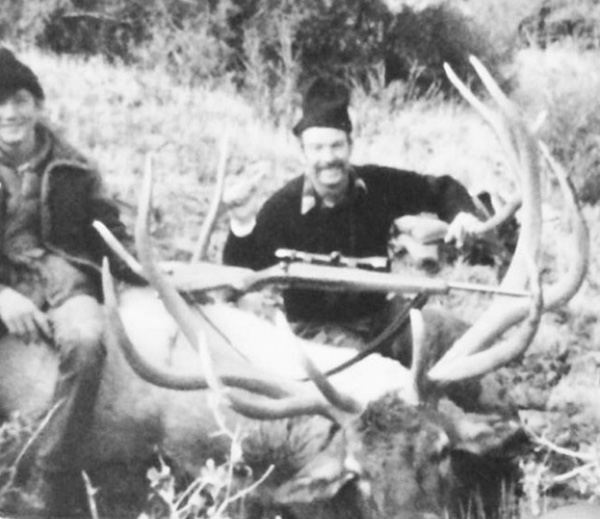 Greg and Dan Peters with a bull harvested by Greg’s brother, Bob, in 1982. This bull grossed 422” and was the number three nontypical bull in the world at the time he was harvested.

As the business grew, I began to add more and more deer hunts to fill my guiding schedule. August and October were dead months in Arizona for deer and elk hunting. With early season dates, our focus in Nevada really started in earnest then. Nevada publishes tag results first and has the outfitter draw, which helped us to secure more clients early in the year and set our schedules.

What is the most important attribute to your success in finding giant bucks? 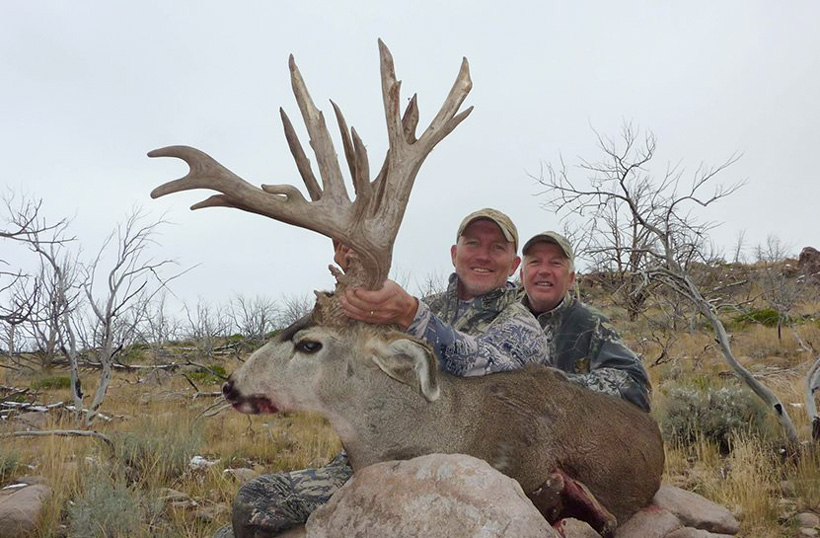 A giant nontypical that Greg guided in 2011.

I’d say spending time afield is the number one key factor in locating big bucks. Preseason scouting and a large number of days afield makes locating mature bucks possible. We are lucky in that we gun hunt many of the units we archery hunt so the preseason and in season glassing sessions seem to build on themselves.

Over the years, I’ve seemed to notice that big mature bucks move relatively little. The bigger and more mature they get, the more of a homebody they seem to become. Smaller younger bucks seem to roam more than do mature bucks. This isn’t always the case, but seems to be a good general rule.

What trends are you seeing in the areas you hunt and how do you see your strategies changing in 2016? 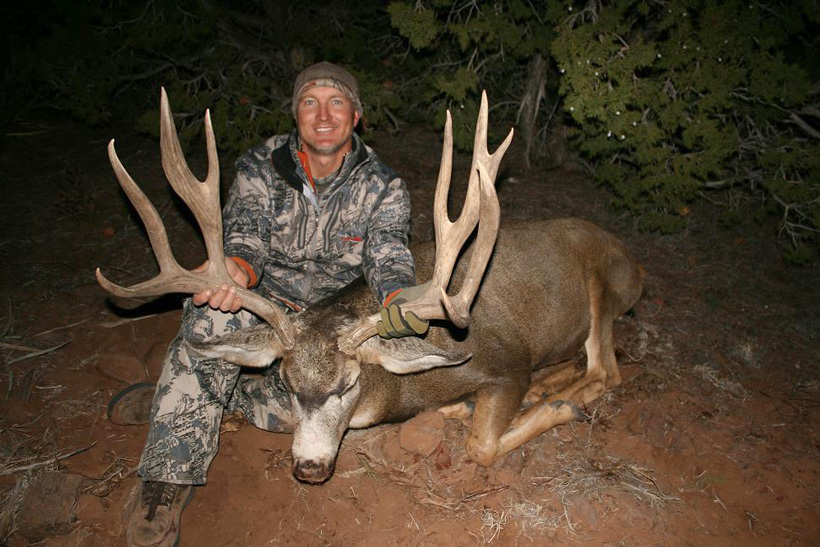 Greg with his 2008 Arizona Strip buck.

It seems that we used to just hunt in whatever area we could find a good buck. Most of the units we hunt now are heavily scouted with trail cameras by other hunters. Avoiding areas with high camera densities and artificial water sources has kind of become part of how we hunt now.

Locating bucks that travel further from water sources and gain less notoriety through trail camera pictures seems to make for an easier hunt, with less competition.

It is amazing how cameras have changed hunter distribution. In 2008, I drew my Arizona strip tag and in over 40 days afield did not see a single camera. This has changed quite a bit now.

My biggest concern with trail cameras is that cameras seem to be finding bucks that would otherwise go unfound. We’ve found some bucks that may have 10 plus people hunting them due to trail camera pics. We try to avoid hunting bucks like this, keeping our focus on other areas.

I have heard Nevada is considering banning cameras after August 1. This would spread pressure out some and leave some bucks out of the trail camera light.

Glassing is obviously a huge part of your success. What optics do you always have in your pack? 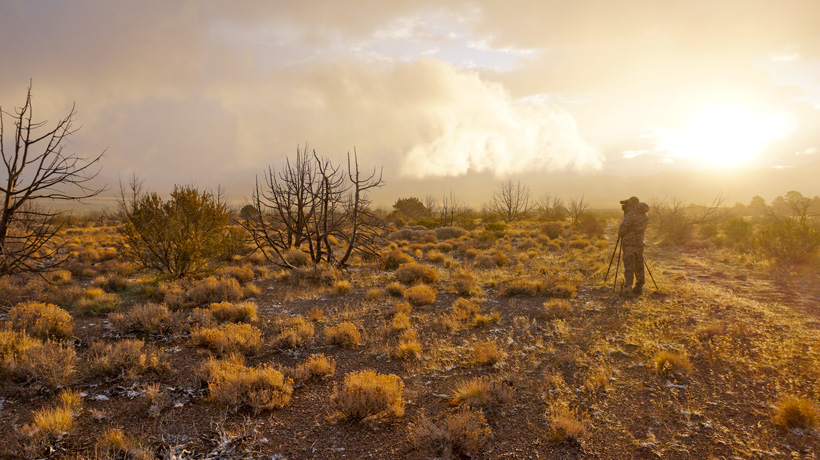 Day to day, I carry Swarovski 15x binoculars and either Kowa Highlanders or Doctor 40 HDs. I like the 15x binos for mid range or intermediate distances. I’ve always run the Swarovski 15x and I really can’t say enough good about them.

Depending on the terrain or distances, I go back and forth from the Kowa Highlanders with the 32x eyepieces or the Doctor 40 HDs. I like the Doctors for the really long looks and the Kowas for more intermediate distances.

I have used the Outdoorsman Long Range Hunters pack for years. I really like the slide sleeves that allow you to easy carry and access your tripod and spotting scope. Tripod wise, I like the SLIK PRO 824CF Carbon Fiber tripod with a Manfrotto 502 video head. Lightweight is nice, but I definitely suggest carrying the heaviest tripod/head you can carry to minimize vibration in your tripod. That really makes a big difference.

Besides your optics, is there any gear you believe contributes to your success?

I’ve been with Sitka Gear since 2005. Since making the switch, I’ve never had a major product failure afield (not even zipper malfunctions, etc). The high performance fabrics out there these days are really hard to beat. Prior to that, I used a lot of wool. The fabrics and design of your hunting clothing really can add to the success of your hunt by keeping you comfortable and out in the elements longer.

What are your thoughts on trail cameras and what role do they play in your scouting/hunting?

I am not a big fan of the trail cameras. Trail cameras are not a major part of how I scout and locate deer. Some of my guides dabble with them, but they aren’t a big part of how we hunt or scout. None of the bucks or bulls I have ever killed have been located with a trail camera.

How do you go about scouting out a new hunting unit?

Well, at this point in my career, I don’t make it to too many new areas. Whenever I do, for my personal hunts, etc., Google Earth is a big part of how I go about scouting before arriving in the hunting area. With Google Earth you can identify water, glassable areas, and huntable terrain all before arriving in the unit. Traditional topographical maps are nice, but they don’t show vegetation and that is a big part of identifying glassable terrain.

When I’m scouting with Google Earth, the real key is locating areas that looks big enough that I can keep track of a buck, but also secluded enough that he won’t be too super visible to a lot of hunters. Kind of a balancing act there.

What is your favorite buck or bull that you have taken over the years and why?

There is one of each that sticks out for me.

I’d have to say my favorite buck would be the buck I guided Randy Ulmer on in 2005. I first found the buck in 2003 while hunting another buck. That year he was around 195”. In 2004, he blew up to over 220 with deep forks and lots of extras. We weren’t able to connect that year. In 2005, his forks shortened up some, but he added a lot of mass and length on his extras finishing out at 242”. This was the first buck I was able to hunt for that long. 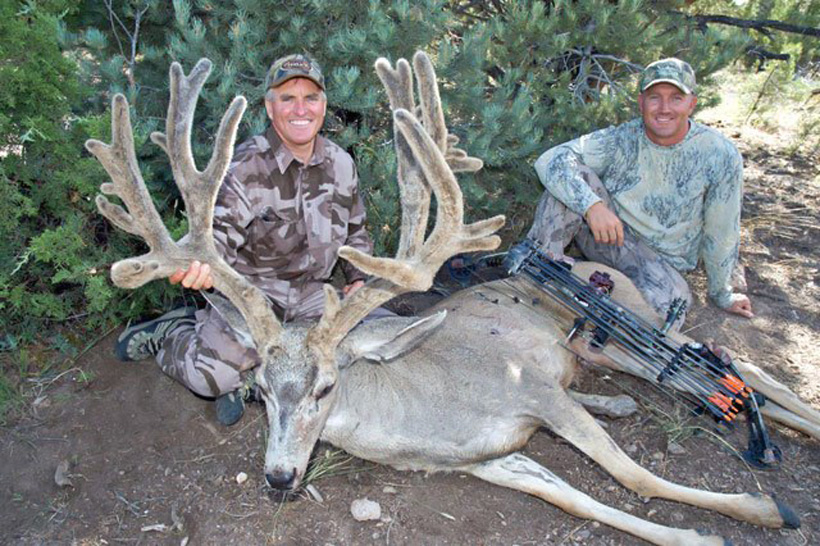 As far as a favorite hunt, I would have to say my daughter’s elk hunt in 2014. My daughter, Joelle, was 11 at the time. My dad, Bob Moore, and Travis and DeeDee Stodghill were all along on the hunt. Having that group in camp made it a special hunt. We backpacked in to hunt a bull my daughter had glassed up on her own early in the hunt. Rainstorms made a river crossing getting in on that bull impossible. My dad and Travis later found a bull we tried to work in on, but things didn’t work out. Later in the hunt, we found a bull in some tough thick country. With the help of Travis and DeeDee we were able to work in on the bull in the dark on the next day of the hunt. Bob Moore was with us when my daughter was able to anchor the bull. 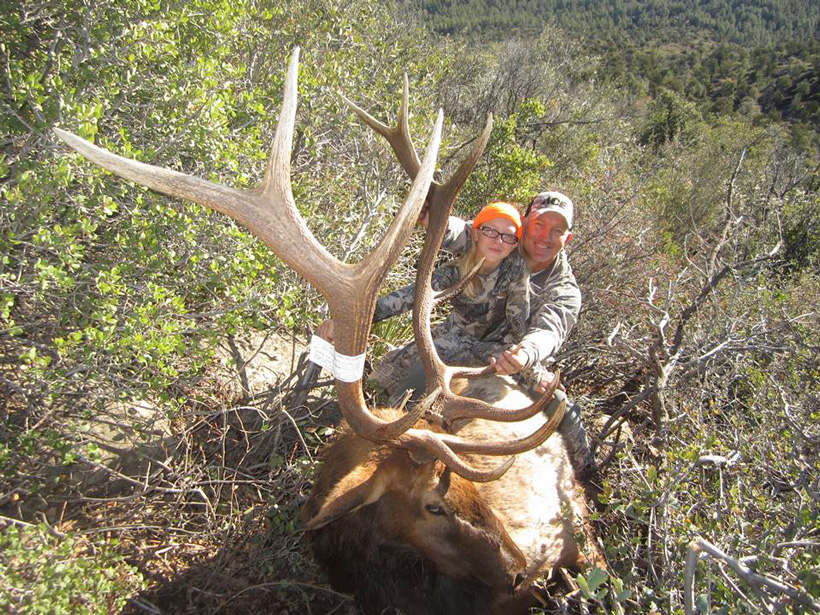 Greg and his daughter Joelle with her 2014 Arizona Bull.

At this point in your career, how do you define success and what are your goals for the 2016 season?

As far as guiding, I just would like to find the best possible animal I can. As I get older, I am not nearly as concerned about what other guys kill as I once was. I really just focus on finding the best possible deer or elk I can find. Maintaining existing client base as well as expanding here and there as tags become harder to draw is the key to my business and that’s a big part of what I strive for.

As for my personal hunting goals, watching my daughters getting into hunting is my number one. They are getting to a place preference points-wise where they should start drawing some tags. They have expressed interest in one day taking over the business. Watching them grow as hunters and grooming them towards one day maybe taking over the business pretty much encompasses my personal hunting goals.

Get more tactics from Greg Krogh on Jay Scott's Podcast