How to film your own hunt 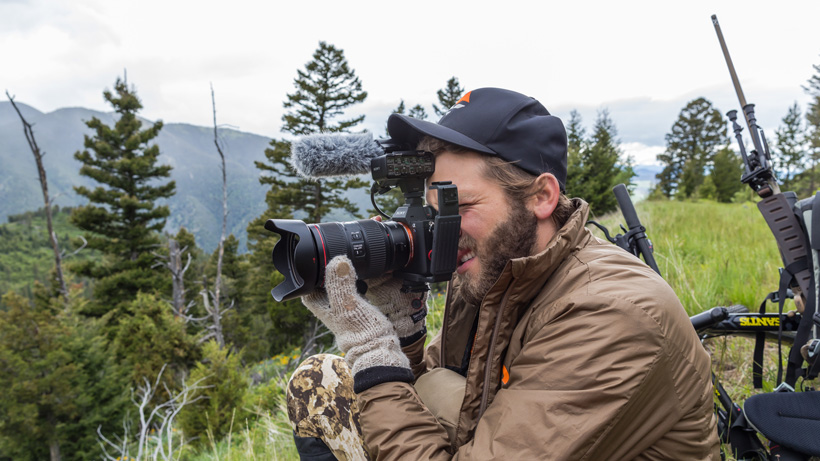 It seems like more and more people are beginning to film their own hunts—and for good reason. Capturing quality video has never been easier and affordable. Most people already have a camera capable of 4K, slow motion, and time-lapsing in their pocket. Yes, your cell phone. And with social media, delivering your content to the world is as simple as uploading a video to Youtube, Instagram, or Facebook.

So if you aren’t already capturing your hunts through video, you really should consider it. Being able to replay those memories from your hunt and share them with friends or family is extremely rewarding and worth the extra effort it takes.

I personally have been filming my own hunts for four or five years. And, more recently, I am filming hunts professionally with Randy Newberg. It is something I am passionate about and a skill that I believe is beneficial because it allows you to capture and share your memories and story. 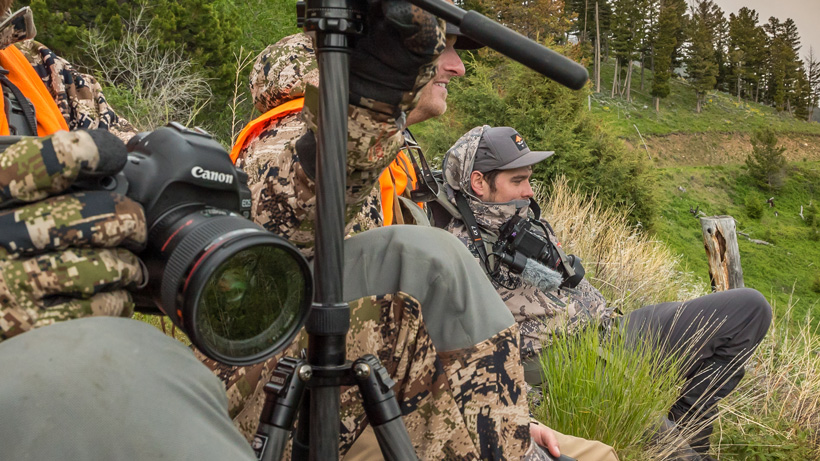 Capturing both photos and video on a hunt.

First off, you’re obviously going to need a camera. It’s often said that the best camera is the one you already have, which is often your cell phone. But, if you do want to take your filmmaking to the next level, there are a lot of high-quality cameras at a very affordable price.

Each has their pros and cons and it really depends on your needs and how much you want to invest—both financially and in learning how to run the camera. For someone who wants simplicity and ease of use, I would recommend a standard video camera. They are pretty reasonably priced and a lot of them shoot 4K now, such as Sony Handycams. Video cameras also have the advantage of having a built-in superzoom, which will allow you to zoom way in on an animal during your hunt without having to change lenses. A video camera is a very usable and versatile option.

Action cameras definitely have their place and can get some really unique angles all while being really durable and waterproof; however, they are also pretty limited and are not near as versatile as one of the other options. One of the main drawbacks to a GoPro type camera is the low-quality audio you get, but, at the end of the day, these cameras are easy to use, can take decent images, and can even shoot 4k.

As more and more people are starting to vlog, point and shoot cameras have become very popular. They often have a flip out screen that allows you to see yourself as you are recording. A couple of good examples would be the Canon G7x or the Sony rx100. These are also pretty reasonable and easy to use. Not only can they fit inside of your pocket, they have built-in microphones on top of the camera (although the audio won’t be that great). Plus, you have the ability to take quality pictures with it as well. If I just wanted something easy to use that I could take quality videos and photos with, I would probably pick up one of these.

For those of you who really desire the best quality and enjoy more cinematic and artistic footage, you would probably want a DSLR or mirrorless camera. There are several brands making great cameras in this category: Canon, Nikon, Panasonic, and Sony.

While these cameras can really be a pain by having to carry multiple lenses and having a much steeper learning curve, the results can be quite stunning. If you are willing to learn the ins and outs of your camera, then a DSLR or mirrorless would be a great choice for you. If you are just getting into filming and photography, a Sony a6500 would be a great choice or something like a Canon 80d. One of the cheapest options that still captures great video is the Canon SL2, which has great autofocus, a flip out screen, ability to shoot slow motion and also has an input for an external microphone.

Cameras, like hunting gear, really come down to personal preference and budget. Get something that you can afford, learn how to use, and don’t mind carrying around the mountains with you. 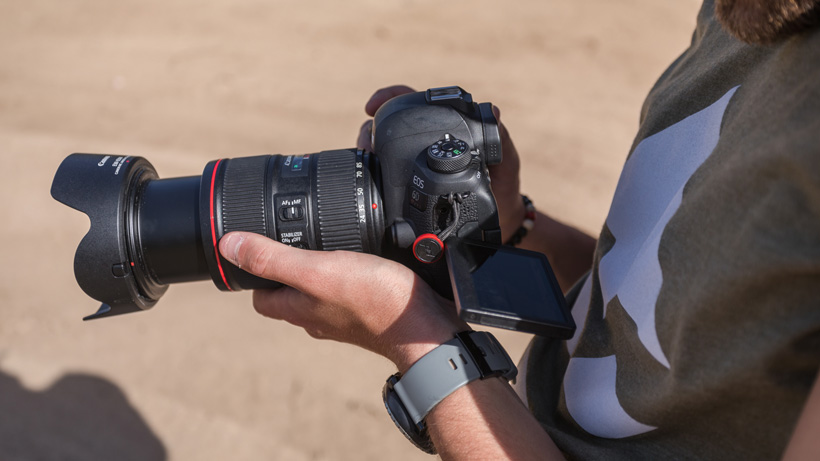 A camera is only as good as its lens. While video cameras and point and shoot cameras have built-in lenses, DSLR, and mirrorless cameras give you the flexibility of choosing which lens or lenses would work best for you.

A lot of cameras come with a kit lens, such as an 18-55mm or 18-135mm, which might be all you really need. A lens like an 18-135 gives you a pretty good range, but it isn’t going to be as sharp or as good in low-light as a more expensive lens with a lower aperture.

First, you need to know what kind of range you want with your lens. A wide lens like a 16-35mm is going to be great for wide landscape shots and if you want to film yourself, but it isn’t going to have the reach to zoom in on an animal. Where a longer lens like a 70-200 is going to be great for filming things further away, that lens is difficult to film yourself or others up close. If you can only afford one lens, get a standard lens that is kind of middle of the road, such as a 24-70 or an 18-135. If you can afford multiple lenses, consider purchasing a wider lens and then also having a longer lens for filming far-off animals.

After you decide on a focal length, you need to decide what aperture you want for your lens. The lower the aperture, the better it is going to be in low light and the better depth of field (blurry background) it is going to have. Aperture is the number you can find on the lens or in the description that says f/2.8 or f/3.5-5.6. For a lens with a lower aperture look for something with 2.8 or lower. 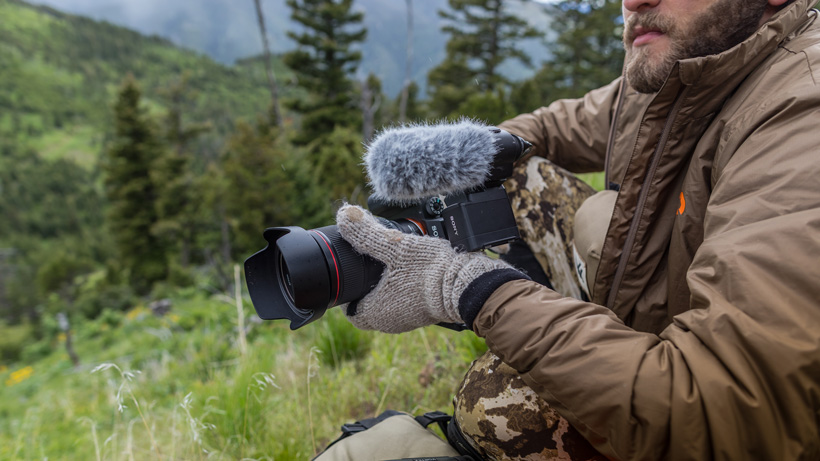 A good microphone can make or break a hunt.

While video is extremely important in capturing your story, audio is half of the picture. You do have the option of making more of a highlight video to music where audio isn’t as important, but having quality dialogue, sounds of elk bugling and your own voice as you’re talking to the camera is beyond valuable for a quality and personal story. Thankfully, capturing good audio isn’t all that difficult.

Point and shoot cameras have a built-in mic without the option to add an external mic. However, most video cameras and all DSLR and mirrorless cameras give you the option of adding a better microphone to capture cleaner sounding audio. The built-in microphones in most cameras usually aren’t very pleasing to listen to so it might be worth adding a shotgun mic on top of the camera. I personally use a Rode Videomic Pro and there are a lot of cheaper options you can find online as well.

Now that you have the gear to film your hunt, it’s time to talk about how to actually go about filming your hunt. The most important thing with filming a hunt is having your camera readily accessible. You never know when you’re going to find a deer or elk and you most likely won’t have time to be rummaging through your bag to pull out your camera. Whether you keep it around your neck, or in your hand, just have it ready. It might be a good idea to buy a clip that attaches your camera straight to the shoulder strap on your pack, giving you quick access while also being comfortable. Both Peak Design and Cotton Carrier make versions of these and the more readily access your camera is, the more you are going to actually film. 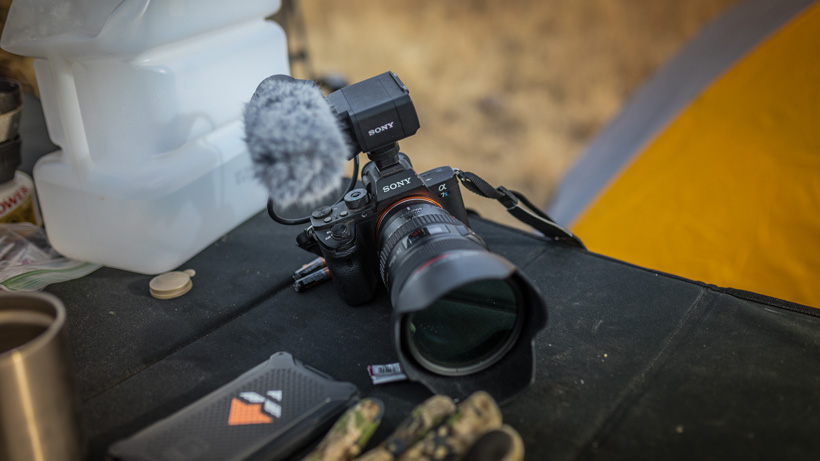 Telling the story of a hunt, even while back at camp. Photo credit: Brady Miller

While filming, your job is to tell the story. No matter what is happening, just film what you think is important. There are a ton of technical skills we could go over, but the most important aspect of a good film is a good story. Film the ups and downs of the hunt, the exciting moment of stalking an animal as well as the downtime of hanging around camp. Anything that is going to propel your story and keep the viewer engaged is worth filming.

Think about what is happening beyond the actual hunt itself while you are there. Often times there are “stories within the story,” ones that go beyond “we bought a tag, found an animal, and shot it.” What are some of the struggles of the hunt? Is there anything interesting about the history of that species or the landscape? Why is hunting important to you? These are things you should consider sharing and that make a hunting video even more interesting.

One mistake of beginning filmmakers is often having shaky and unstable footage. While there are certain times that this may actually be preferred (during a chaotic moment), it is usually pretty unbearable to watch when you actually edit together the video. The more stable (but not necessarily stagnant) your footage looks, the more professional it will appear.

A lot of cameras have built-in stabilization, which certainly helps, but there are other things you can do as well. Without any additional equipment, you can make your footage more stable by holding the camera tighter to your body and trying to have multiple points of contact with it. When you’re moving, make sure to bend your knees and treat your camera like a hot cup of coffee you’re trying not to spill.

Another good and easy way to help is by using a tripod or a monopod. Both are good options, but a monopod might be quicker to use as it doesn’t have three legs. You likely are already carrying a tripod for your optics and a tripod is going to be even more stable. There are a lot of stabilizer options out there that keep your footage steady while moving like a gimbal, but I don’t know many hunters who are willing to carry them or deal with the batteries or the motorized ones.

Beyond these pointers, there is a lot of creative freedom. At the end of the day, you are filming your hunts for yourself to enjoy so be creative and have fun capturing the story of your adventure. Film the parts of the hunt that is meaningful to you. You are capturing memories that you will forever be able to share with your friends and family. On that note, if you're more into still photography, you can check out this great article on enhancing your hunting photography in the field here.