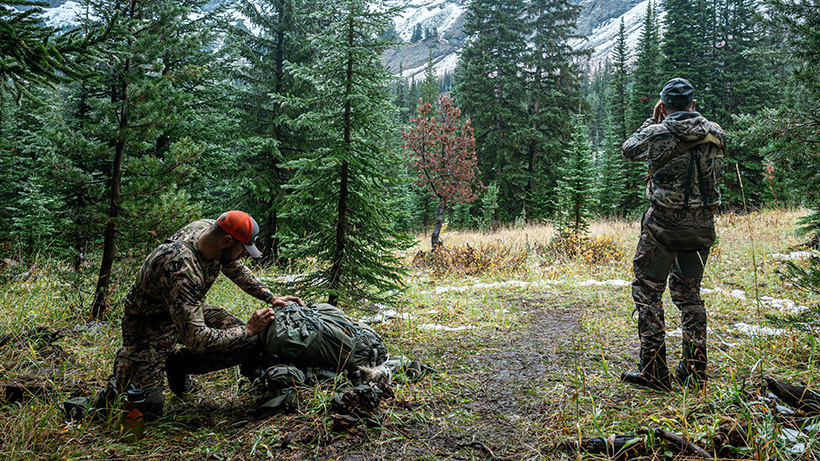 Growing up in Pennsylvania, I had so many dreams of one day going out West on a trip or two like my dad did chasing mule deer, antelope or the infamous elk across the Rocky Mountains. Just as quickly as I started to dream about it, I  would rationally shut it down with incorrect thoughts that ultimately delayed the process of fulfilling my dream.  I would shut down the thought and think of all the obstacles I could face like needing to be rich in order to hunt out West or that my gear won't work because it is all whitetail gear or that I would definitely will need to obtain a guide my first year.  I'm sure I am not the only one who has had those same thoughts.  My go-to excuses always were the “I am too old to be hunting those mountains” or “you need to be in great shape.” Or maybe you're on the opposite spectrum where you think hunting out West will be easy. All you need to do is just call a few times and a bull will magically run to you like a lot of shows on TV depict.  I am here to tell you that all of these excuses — and any other ones you might be entertaining — are wrong! Sure, western hunting has its challenges, but it can be done by nearly everyone with just some research, basic hunting knowledge and drive.

Myth #1: Western hunting is for the rich

Though western hunting is not super cheap, it is also not just for the rich. It is doable for your average Joe just like me. If you combine costs with a few hunting buddies, you could easily chase antelope, mule deer or even elk for around $1,000 to $1,500 — and that’s including travel. With a well-planned budget, this means that you could hunt every year out West no matter where you live.  Of course, trying to keep a hunting trip at a lower cost will mean that you will drive and pack your own food instead of flying and eating out, but that means that western hunting can be affordable and included within most budgets.

Though western hunting gear has come a long way and is an awesome perk to have, it is a luxury; not a necessity.  The biggest advantage to using western gear is that it is built for western hunting; however, a hunter on a budget has some options.  For example, although western clothing is great, it is excessive on a limited budget; you can hunt out West in your eastern whitetail gear. The biggest thing that you need to have is a good base layer and many other thin layers.  When hiking in the mountains you often break a sweat — even in subfreezing temperatures.  You need to make sure you take off layers as you get warm so you do not sweat too much.  This allows you to be able to put on dry layers once you slow down or get cold.  Though new optics and weapons are nice, your normal binoculars and gun or bow will continue to serve its purpose in western states just like in eastern (or southern, etc.). Just make sure to sight it in to shoot a little further and you will be in great shape.  To go on these western hunting trips, realize that you do not need new western-oriented gear unless you can afford it.

Myth #3: You need a guide for your first year

I used to feel overwhelmed and often thought that I was not prepared for a western hunt.  I thought that the only way to combat these feelings and to be successful was to go with a guide. While a guide can be an asset to a great hunt, it also makes your hunt a lot more expensive.  I eventually decided that I needed to go on a guided hunt for my first year and, man, was I wrong.  In fact, if you are an American hunter, you do not need a guide because you have some basic hunting skills, YouTube and GOHUNT.  Your hunting skills will aid you in hunting styles, shot placement, butchering and much more while YouTube can fill in the rest of the skills that are necessary.  GOHUNT can help you figure out a unit that has good animal numbers and harvest statistics.  Then, place a few phone calls to local biologists and game wardens and you should have just as good of a shot as anyone your first year out.

Myth #4: Western hunting is only for young fit hunters

While western hunting is definitely easier for younger hunters who are physically fit, it is not only limited to the young and fit hunters. In fact, some western hunting units can be hunted by people of any age and any physical shape.  I have hunted elk and mule on flat terrain where the animals were near the roads and also steep terrain where elk or deer were found miles deep.  Understanding what the unit is like before applying and purchasing the tag is key to finding a unit that works for your physical fitness abilities.  However, there are quite a few units in every state that are tough — even for a physically fit hunter so be sure to plan prior to your tag.  If all else fails, plan on hunting mule deer or antelope in the plains and prairies where the terrain is moderate to flat.

Though western hunting is an attainable goal by most hunters, it is important to note that it is not like what you see on the Outdoor Channel or in most of the media world.  Western hunting can be extremely grueling on your body and mind, especially if you are hunting in a unit that is steep and remote.  You are dealing with a lot of competition from other hunters and animals that are instinctually bred to survive and live in these basins and ridges of the Rocky Mountains.  Hunting out West is never an easy hunt, but it can be a fun hunt with great memories and equal opportunity for all.

If you are a hunter from the East Coast or another non-western state, do not be fooled into thinking that western hunting is too complicated for you.  If you have some hunting gear, some hunting skills and the determination and drive to go, then you can definitely make it happen and have a good chance at harvesting a buck or bull.  In fact, I was one of those hunters who happened to get lucky my first year on a 5-point bull elk on a DIY Montana elk hunt.  If I can do it, so can you!