With the cost of everything on the rise these days, more and more hunting-related projects are becoming do-it-yourself projects. We spend a lot of time, energy and money in harvesting deer, and it is a shame to not finish the job right. Once you get that buck on the ground, it is time to decide what to do to preserve the memory.

Shoulder mounts look great on the wall, but add the cost of paying a taxidermist to finding room on your crowded wall and soon enough you will start looking for other options. Personally, I find European mounts a great option. They have a certain kind of visual appeal on your wall, and with new mounts on the market that allow multiple poses, they quickly have become my go-to option.

Here is how you can do your own European skull mount, with a few items easily found in your local outdoor or hardware store. 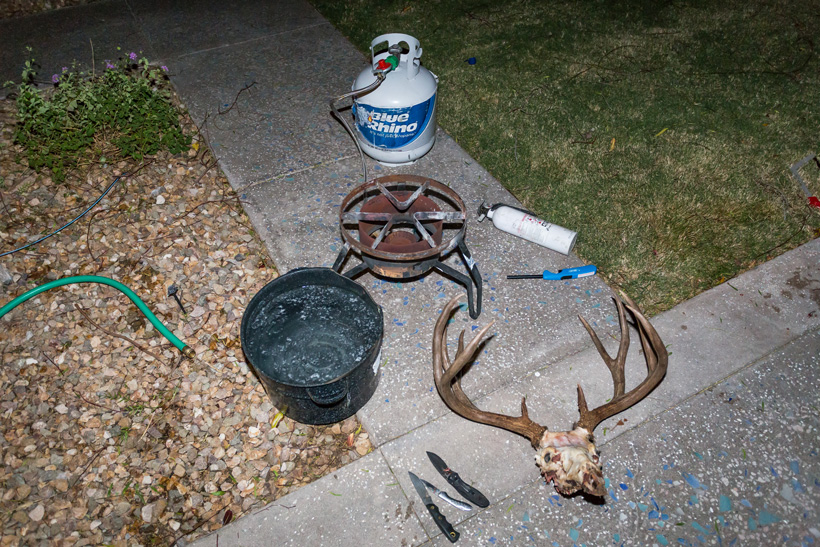 After deciding that you are not going to do a shoulder mount, the first step shortly after harvesting your deer should be to remove the entire hide from the skull. I normally do this right after I take a bunch of harvest photos; it is way easier at that point. Trust me, the last thing you want to do is leave the hide on the skull and place the skull in a shed for a period of time, or freeze the skull with the hide on. Leaving the hide on can increase the chance for grease spots on the skull. 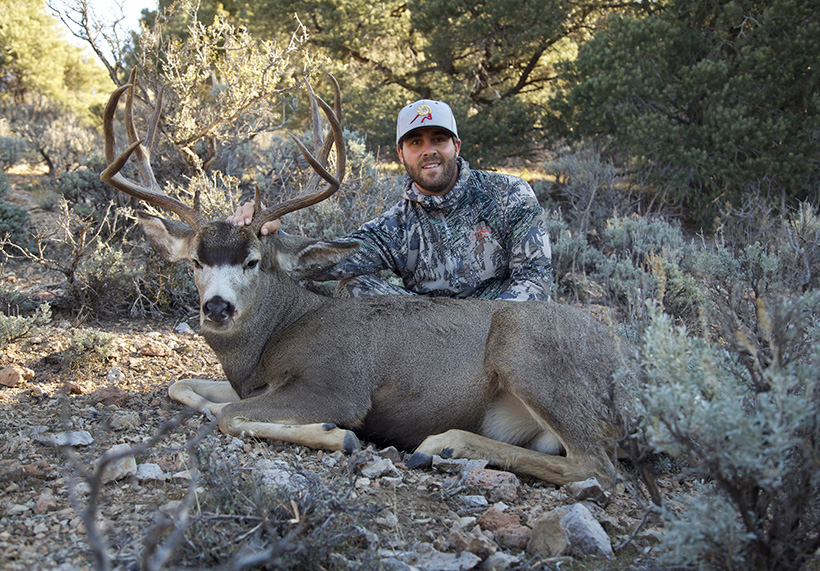 Lorenzo Sartini with his 2013 mule deer that was used for goHUNT's how-to taxidermy article.

After removing the hide, it is time to remove the lower jaw and eyes, and attempt to remove the brain in the field. I say "attempt" because it can be difficult. The brain is another spot that can cause grease marks in your skull if you leave it in after the harvest for a long period of time. If you have time, it is a good idea to trim up some of the muscle on the skull.

Once you get back home, it is time to let the propane burner go to work. Start off by adding a generous amount of high-strength soap to a pot of water. I prefer soap on the first round to help pull grease out of the skull. 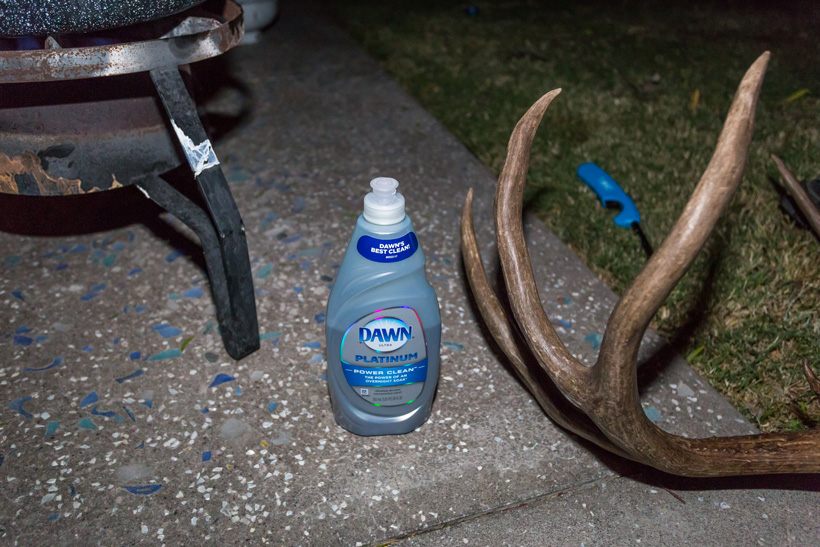 Bring the water to a boil, then turn the dial back a small amount until the water is at a simmer. I cannot stress this enough: DO NOT BOIL THE SKULL. Boiling the skull will greatly increase the odds that your skull will become brittle and may cause some teeth to fall out. If this happens you will need to super glue the bones back together at the end of this process.

Leave the skull in the water for at least an hour. After an hour the skull will be ready for some scraping with a knife. 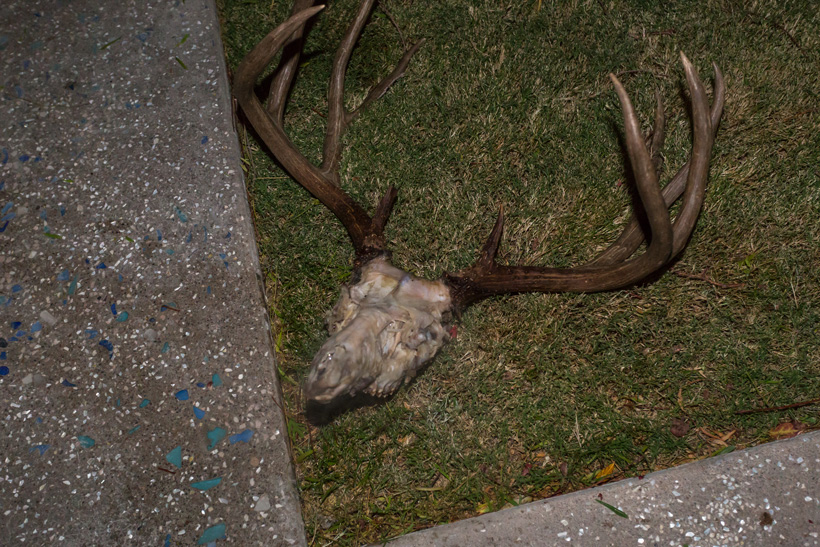 Next, grab the skull and cut & scrape the remaining meat from the skull with a stiff knife blade. You should notice large chunks of meat and tissue starting to peel from the skull and become very easy to remove. At this time I will also pop out the ear bones with a screwdriver. Some people leave the ear bones in, but they are very difficult to clean the meat off of, and they don’t add any looks to a finished skull. 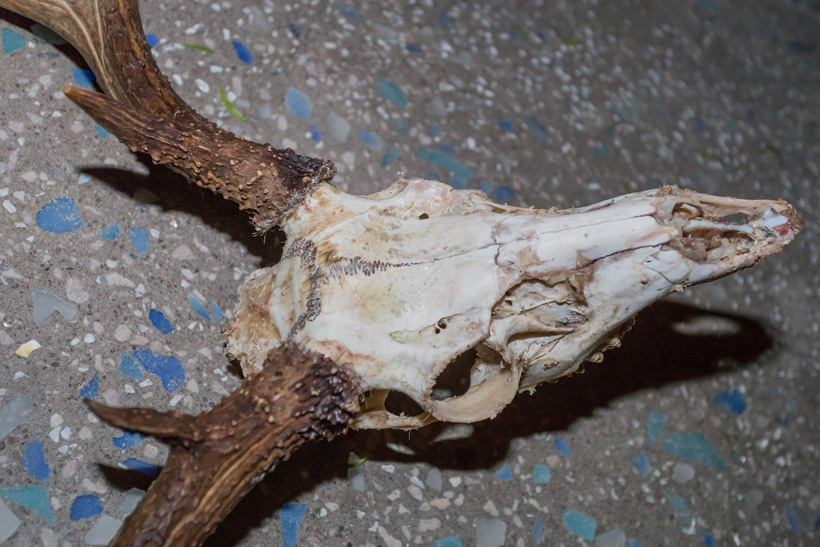 After going over the skull for a while, drain all the water to start fresh again. Starting with a new pot of water is best to avoid having the skull sit in the grease from the first round. 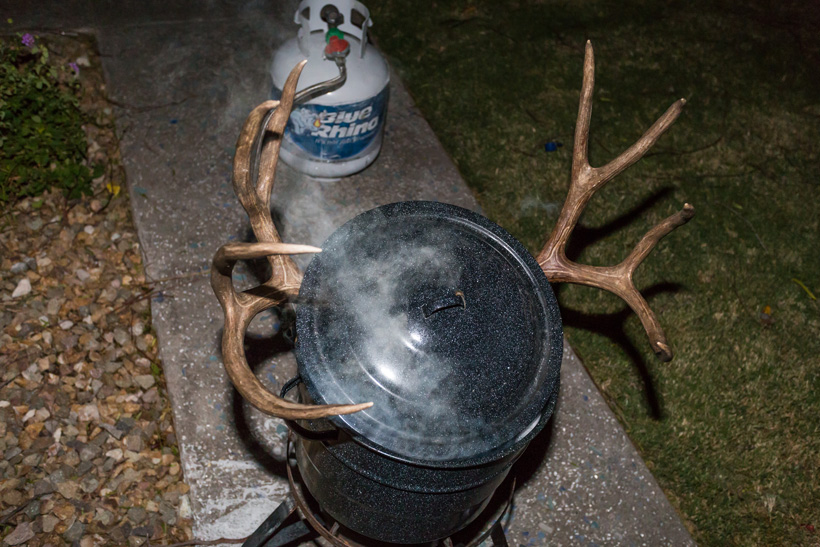 On the second round, I will use one box of baking soda instead of soap. Baking soda works wonders at finalizing the skull. Bring the water to a boil once again and dial it back to a simmer. Leave the skull in for another 45 minutes to an hour. 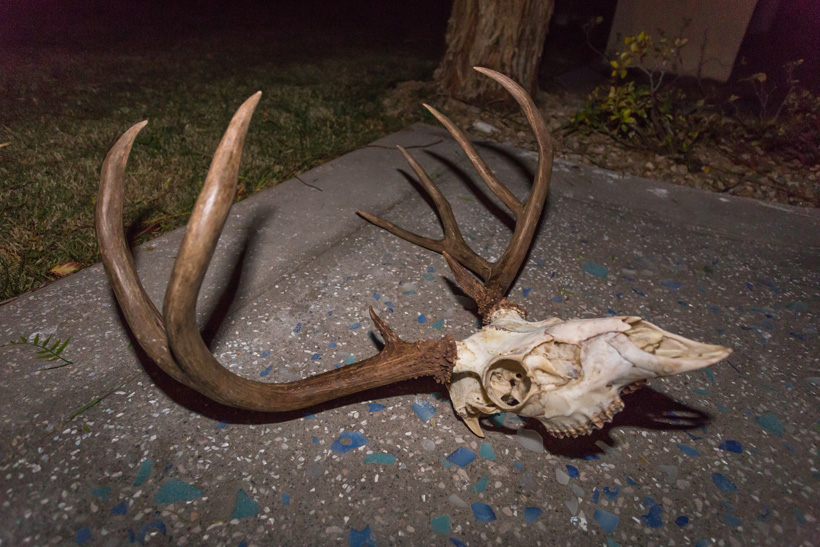 After this round, at least 90% of the meat should be off the skull. 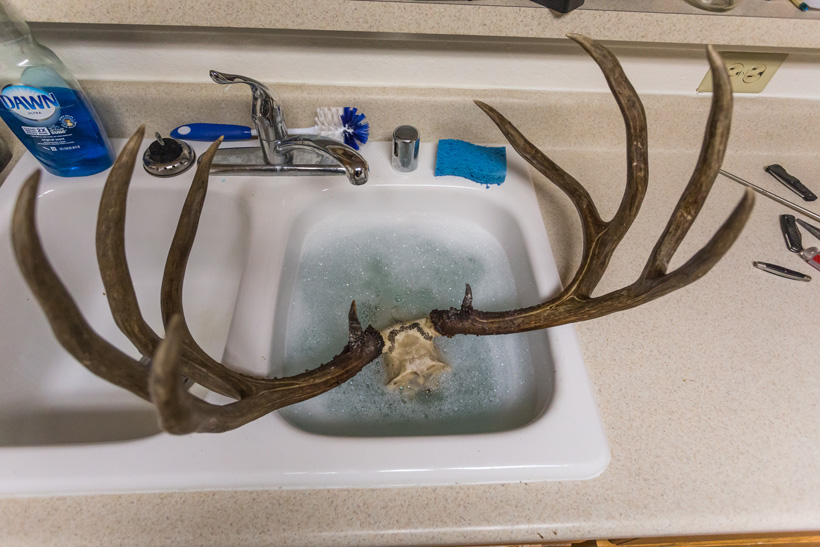 Once you take the skull out of the pot, place it a tub that is full of hot soapy water. This helps finish the skull and is another method to remove additional grease. It is best to use a tub outside, but a sink can be used in a pinch. Leave it in the hot water for 10 minutes while you scrape the small amounts of meat off.

Finally, take a garden hose and use a high-pressure setting to blast all the loose meat and nasal tissue out of the nose. Periodically place it back in the soap and blast the skull with the hose in the tub of soapy water. Caution should be used here so you don’t break the fragile parts of the skull. On elk and moose I have used a pressure washer to blast the skull clean.

The pressure from the garden hose will free up all the remaining tissue and leave your skull clean on the inside. Then place the skull back in the soapy water and give it one last blast of water. This is also a great time to use a knife to scrape any remaining meat from the skull.

Now, thoroughly dry the skull in front of a heater. Take the skull and place it as close to the heater as possible (this is why I prefer an electric heater). 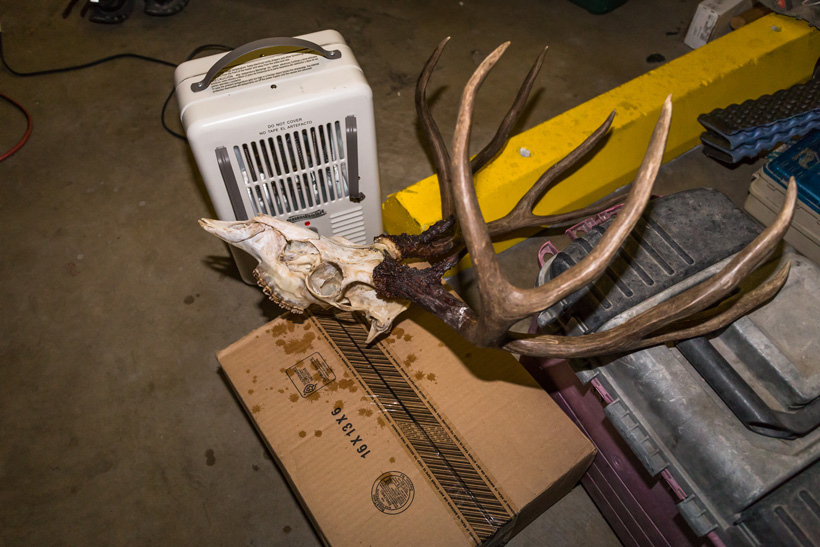 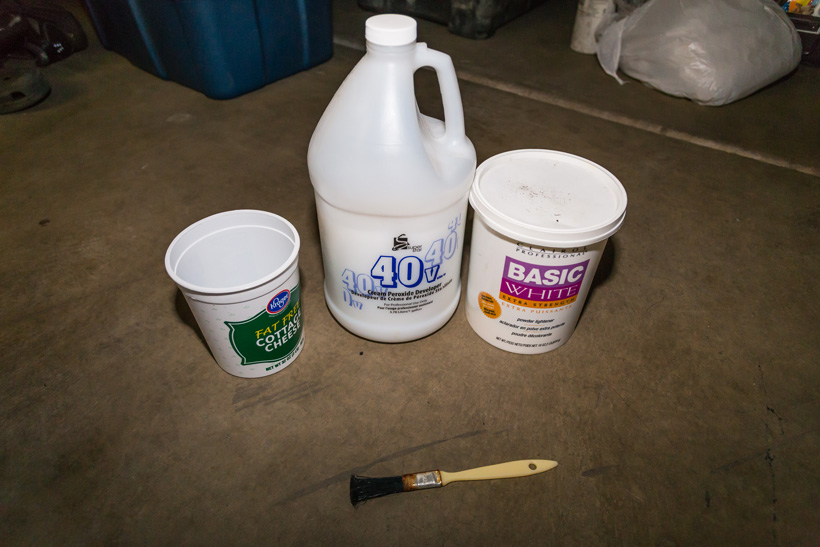 Start by mixing the Volume 40 and Basic White until you reach a thick “yogurt” type consistency. These two products will create a whitening agent that will do wonders to your skull. 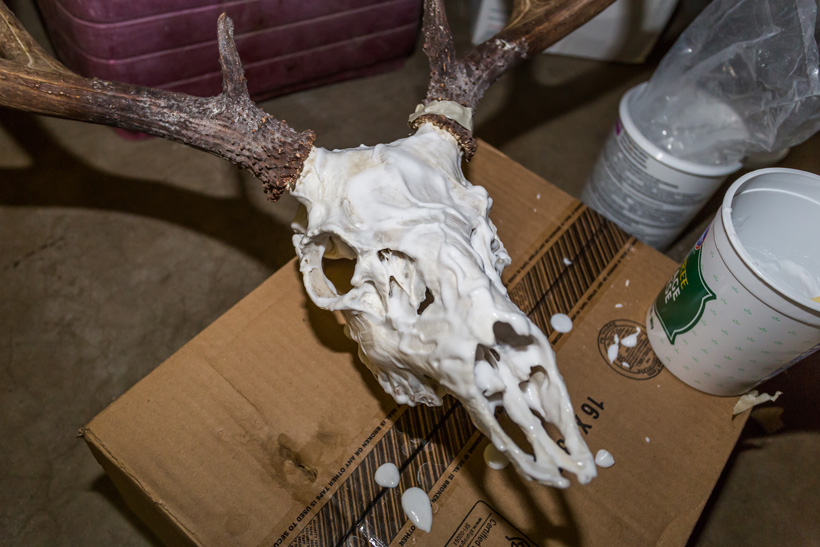 Now, brush on the mixture in every corner and crevice on the skull. The key takeaway here is the more the better. Don't be shy with the mixture, just avoid getting the mixture on your hands and on the antler bases. It is best to wear rubber gloves because the solution can slightly bleach your skin. 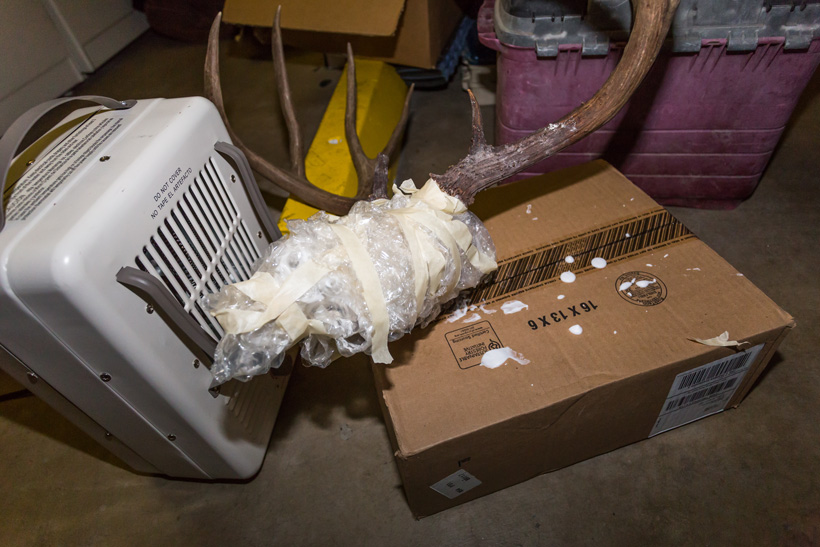 The next step is to wrap the entire skull in bubble wrap. Use masking tape to secure the bubble wrap. Try to get the skull wrapped up completely to prevent the whitening agent from drying out. 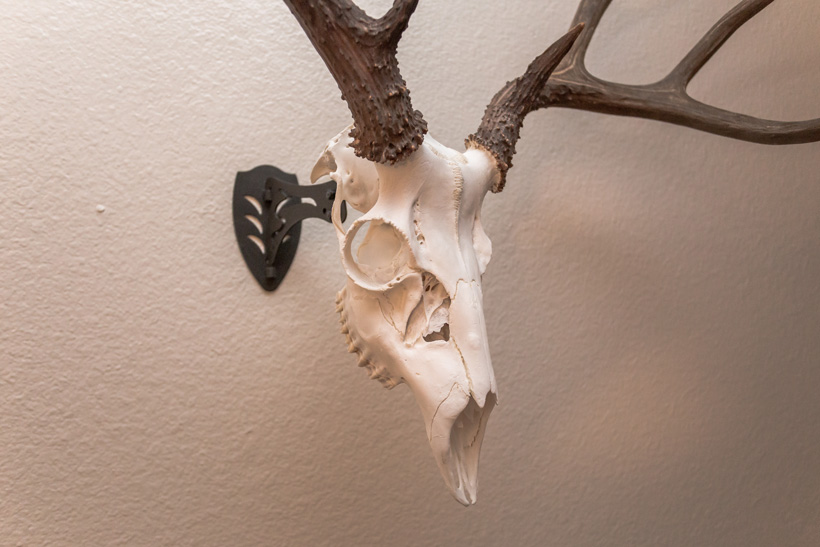 You should now have a finished skull worthy of showing off in your house. There are a lot of great mounting options out there. I prefer to use a Skull Hooker mounting bracket which allows for multipe skulls angles. 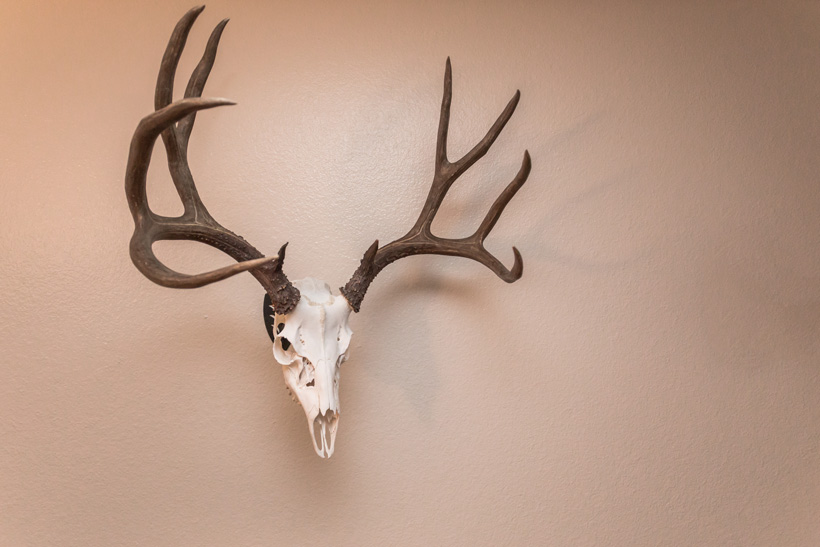 There are many methods for creating a European skull mount. This method I have modified through the years from friends and local taxidermist information. No matter the method, European skull mounts take time to complete, but you will be pleased with the outcome when your animal is on the wall.

You can read part two and three on DIY antler mounts here: