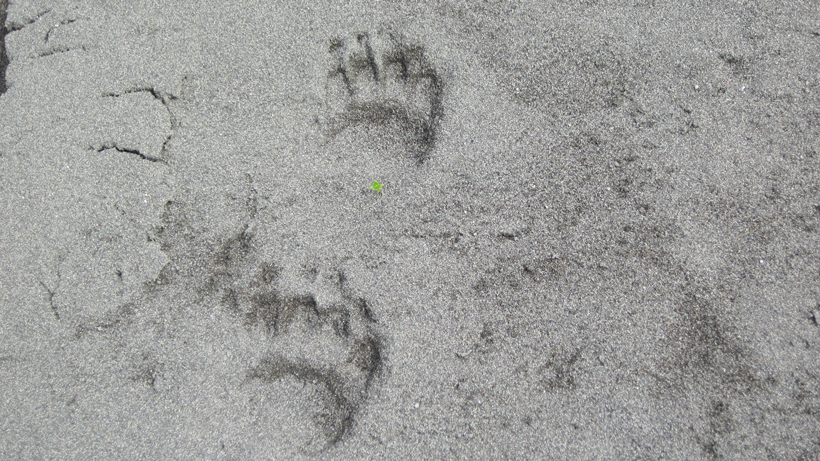 My first grizzly encounter was simple. He was about 10 feet away, and all I had was my longbow — not a good scenario. While everything turned out okay, bowhunting in grizzly country requires self-protection in a number of forms.

Grizzlies are a serious problem

Since 2010, there have been nine fatal grizzly attacks and six fatal black bear attacks. There are also non-fatal attacks every year in the western states, particularly in Wyoming and Montana, and of course in Alaska. Nobody is immune. A hiker was just killed by a black bear in New Jersey. Anywhere people come into contact with bears, attacks can happen, and they include hunters, hikers, campers and anglers.

Grizzly attacks in particular have been on the rise in the western states. As a matter of perspective, the chances of being killed by a bear are far less than other simple ways to die (like bee stings or dog attacks). Still, if you hunt in grizzly country, or even around black bears, it is foolish to take chances. Respect the animal and don’t put yourself or the bear in a situation where somebody is going to get hurt.

Your options for defense

For a bowhunter, there are two choices: pack a gun, or pack bear spray. The Alaskan bowhunters that I know tend to prefer guns. The advantage to the gun is that it can fire a warning shot and scare the bear off from a distance. Guns also work in any kind of weather. People also have successfully defended themselves from bears with firearms.

Guns have a big downside as well. They are heavy to carry, and you need to attach them on your body or pack for quick access, which can get in the way while you are hunting in thick timber. Also, guns are not legal to carry during an archery season in some states. The biggest disadvantage, however, is that fine motor skills and adrenaline don’t go together. I know a number of law enforcement members who will tell you that not everyone (even when highly trained) can use a gun (especially a handgun) well in a self-defense situation. Guns require practice, just like you have to practice with your bow.

Bear spray is a great invention. It blasts concentrated pepper spray about 30 feet, and the bears eyes, nasal passages and throat are quickly affected. The spray has been used successfully to fend off bear attacks without any long-term injury to the bear. There are a number of advantages to the spray, including the fact that it doesn’t weigh a lot and can be carried in a holster. The downside is that in wind or bad weather, it is not as effective. It is also something most bush pilots won’t want inside their plane (it can be duct-taped to a strut outside the plane) and you can’t put it in luggage for an airline either. It is also something you won’t want to touch off from inside a tent.

Guns and spray each have their pros and cons, and for this reason some hunters carry both — where legal, of course.

The best way to avoid a grizzly attack 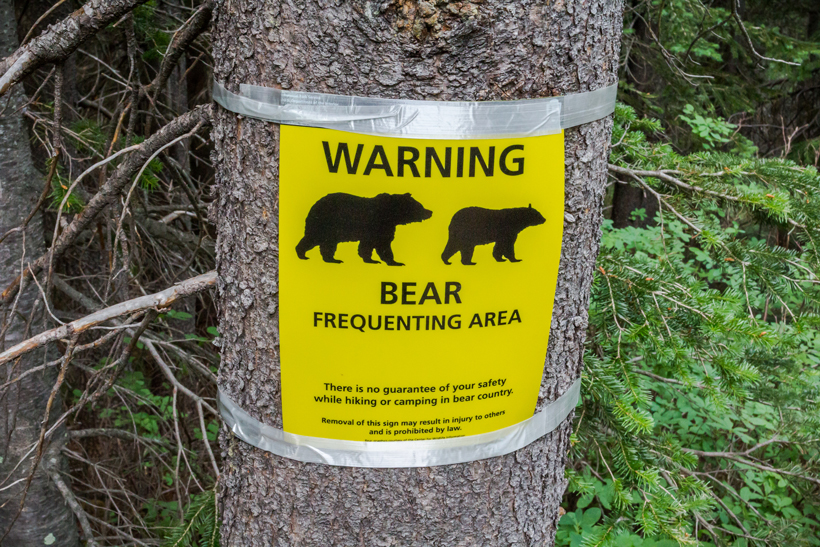 The best option for dealing with grizzlies is to not have to deal with them at all! In grizzly country, the bears have to be the first thing on your mind and determine how you conduct your hunt. Always be on the lookout for bears. If you see a bear, don’t enter its space. Give any sows extra space; if they have cubs with them somewhere and you get in the middle of the sow and its young, you might have a serious problem.

Also, try to avoid having to move through thick cover, but if you can’t, make plenty of noise as you move. Avoid surprising a bear up close. Startling a bear that has a carcass stashed is just bad news. Watch for scavengers concentrated near a carcass, and avoid areas where you smell something dead. Having the wind at your back if you move through cover might not be the best thing on an elk hunt, but it is a good way to avoid surprising a bear.

Keep your camp as clean as possible. Don’t leave food out where they can get at it. (We use rubberized dry bags for our food and keep them closed.) Bear-resistant canisters and coolers like the Yeti are available for use, and also try to avoid smelly foods like fish or bacon. Don’t cook close to your tent or inside of it. Bury any garbage or food waste, or burn it in a hot fire. 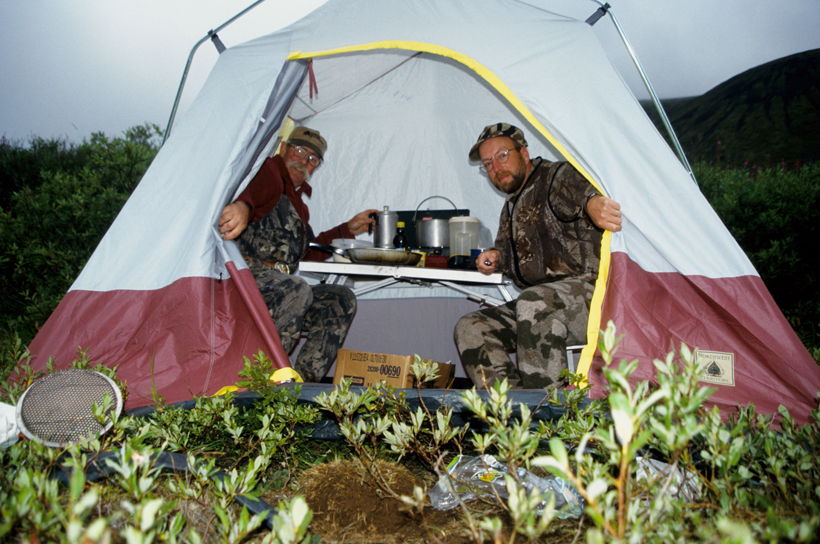 If you have meat, hang the game bags downwind of camp. If you are near the end of your hunt, having a fire that blows smoke toward the meat is a good idea. If you got blood on your clothes, don’t bring them inside your tent.

Avoid careless handling of other items like toothpaste, toiletries or anything else that has an odor. Pets also attract bears, so if you bring your dog on a backcountry trip, remember pet food is bear food. Keep it in plastic and don’t leave any of it out.

Be careful using game calls. Bears are learning to respond to elk calls. They also investigate deer calls in some areas, like Kodiak Island, for instance.

If you see a bear and it hasn’t seen you, back out of the situation without alerting it. (That’s how I got out of my own situation.) If it spots you, stand your ground and talk to it; let it know you are human. Wave your arms and try to appear larger. It may not know what you are, and will stand up for a better look. If it doesn’t leave, make more noise, but don’t run! Running may trigger its natural response to chase prey, and a person cannot outrun a bear. 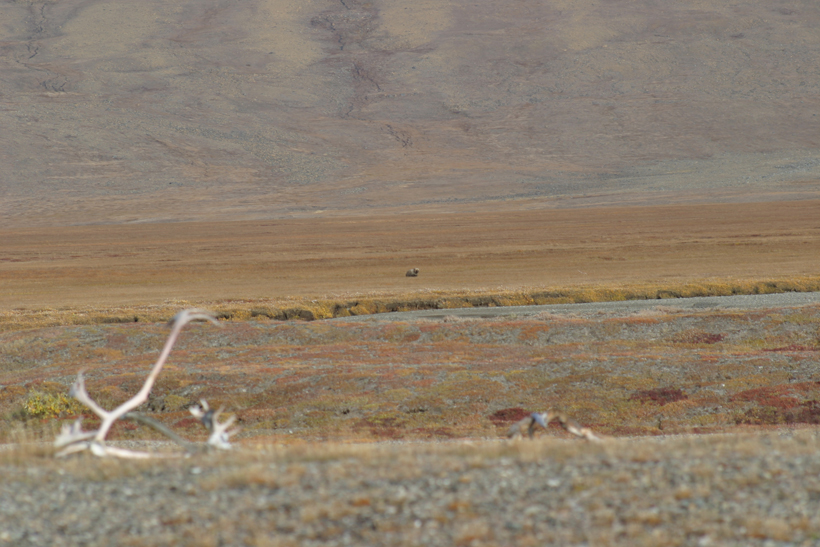 Some bears will actually bluff charge, and veer away a few feet from you. Some will charge and mean business right away; it all depends on the bear and the circumstances. The state of Alaska has some great advice on dealing with bear encounters here, including video of bear spray in use. Every hunter should read this information, as this knowledge can definitely help avoid problems.

A note about firearms 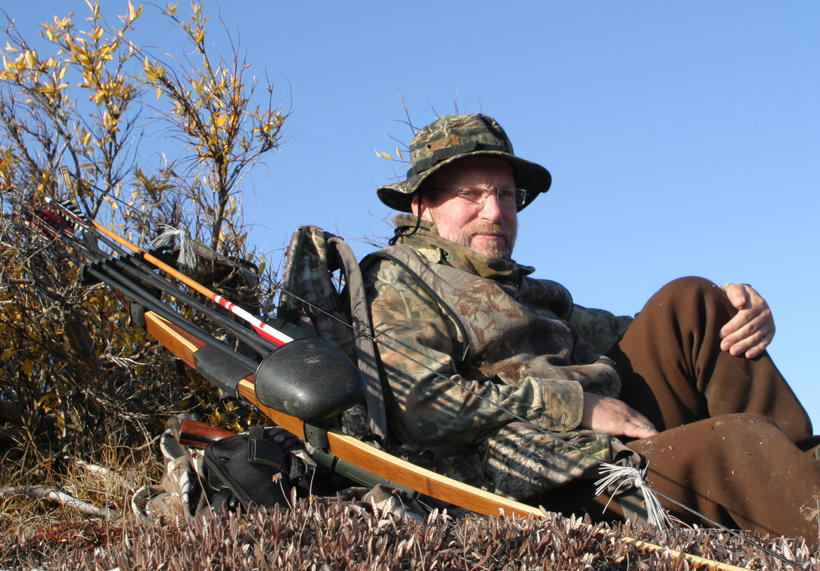 If you choose a gun, it has to be big enough, and you have to be proficient enough to use it in a life-or-death situation, which a lot of people are not able to do. Those friends in law enforcement that I mentioned above train regularly with firearms for combat situations, and they will tell you that lethally hitting a charging bear in close quarters, especially with a handgun, is a tall order. On top of that, a wounded bear is a danger that has to be resolved. Also, in the lower 48 states, grizzlies are protected by law, so if you do shoot one, you can count on a thorough law enforcement investigation.

Long guns are a better option in terms of effectiveness in a bad situation, but for a bowhunter, carrying a compound bow and a long gun capable of taking down a grizzly (at least a .300 Weatherby or larger or 12 gauge with slugs) is just too much. Plus, a long gun on a sling doesn’t do much good. Most bowhunters opt for handguns, and the minimum used in Alaska for protection is a .44 Magnum. There are more powerful calibers (e.g., .454 Casul, .500 S&W Magnum). Generally, you opt for the biggest one you can shoot well, which for me is a .44 Magnum.

Carrying a loaded handgun around all day is a pain, and if it’s in your pack it doesn’t do a lot of good. I have a holster system made by WWL holsters in a style that a lot of Alaskan guides use. It holds the handgun across the front of your chest, so it’s right there if you need it, and I can still shoot my longbow while wearing it.

And then there’s bear spray

Bear spray is becoming more and more popular. Bear spray manufacturers have chest and hip holsters available, and even make inert cans of the product for training purposes. You can also purchase holders for mountain bikes and ATVs. Bear spray is relatively inexpensive as well.

You should definitely get the holster, as again, your protection doesn’t do you much good if it is in your pack. Either chest or hip holster will work for spraying a bear in close range without having to remove the canister. The canister has a safety device to avoid an accidental discharge, and you should learn how to deploy the spray.

Remember, again, that bear spray cannot be transported on an airline. It has to be purchased where you will be hunting or drop-shipped if you are on a hunt away from home.

It’s your choice, so choose well

I’m not a bear expert. I’ve seen plenty of grizzlies and have had a couple of negative encounters -- but none of them bad. So far, I’ve only had to put my hand on the butt of a gun once, but did not have to draw it. I like the idea of bear spray, and would certainly use it on a hunt in the western states, but it is difficult for me to deal with on an Alaskan bush-plane hunt. By the same token, there are self-proclaimed bear experts that have gotten killed because they took too many chances.

Every bowhunter has to decide how best to protect themselves, and what means to do it with. Take the time to research safety in bear country (especially if you have never been there) well ahead of your hunt. Simply learning how these magnificent animals behave might just keep both you and the bear safe!