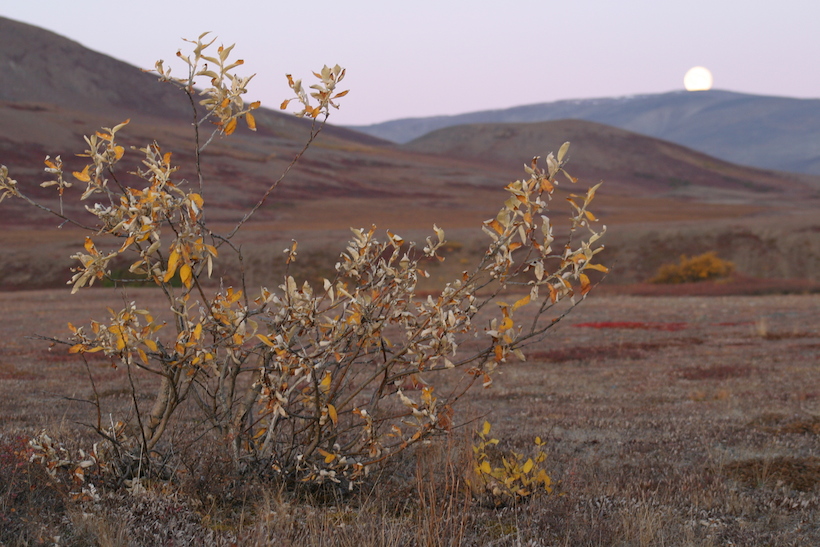 After hours of glassing, I finally spotted a young bull 20 yards away as he made his way up the valley. As he dropped his head to feed, I drew my longbow, picked a spot, and released. It was the high point of my first of many do-it-yourself (DIY) Alaska hunts. These "dream" hunts are easily achievable with the proper planning.

Seven steps on how you can plan your own 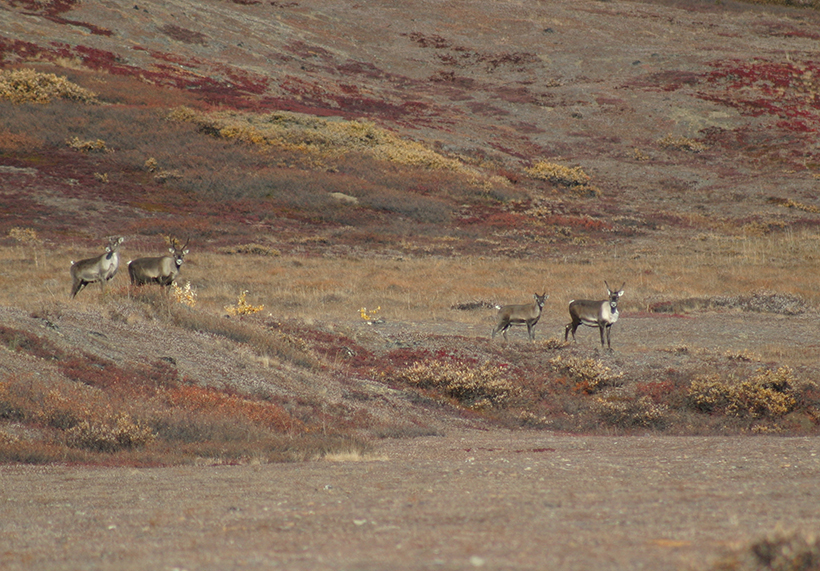 Step one for an Alaskan DIY hunt is to pick a species. Typically you are looking at pursuing caribou, black bear, moose or Sitka blacktails. The dangerous hunts like Dall sheep or grizzlies require a guide. Solo hunts are possible, but going with at least one companion to share the chores and for safety is best.

Then, research and plan on when to go for that species. Alaska Department of Fish and Game's (ADFG) website is a wealth of knowledge. They provide plenty of information on season dates, harvest statistics and maps. I highly recommend reading the Alaska Outdoor Forum and using the discussion threads from folks who hunt there to plan your trip. For example, caribou start to gather for their migration in late August. Go too early, and they will be spread out and hard to find. The information on that site will help with timing a successful trip.

Next comes the budgeting. You can buy a caribou tag for $325 plus $85 for a hunting license. Plan on airfare (including extra baggage fees), possible unexpected hotel stays and meals, equipment and trophy care/meat shipping. Be particularly careful about extra baggage fees and shipping fees, because shipping anything to or from Alaska is expensive. 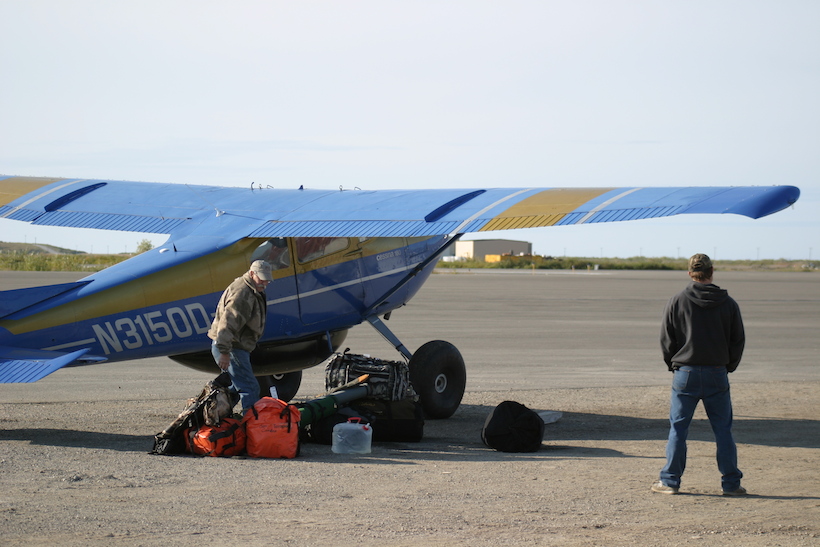 Once in Alaska, you’ll need a bush pilot or transporter to get to a hunting area. Be very careful picking one. Look for a transporter with a good reputation that knows the hunting area well. If the flight service doesn’t put you in a place where there are good odds for encountering the game animal you are after, your dream hunt becomes a very expensive camping trip. Be sure to check references and do a thorough web search to look for complaints. Most bush pilots and flight services are reputable, but always check deeper than looking at their website.

Find out what type of aircraft they fly and whether you can spend some extra time flying around the hunting area to get an idea of the cover. Bush pilots typically won’t allow more than 70 pounds of gear per hunter, maybe less if they are flying Super Cubs. They prefer smaller, soft duffels/bags over hard cases for packing the plane. Weigh your gear at home, and be sure you are not packing too heavy.

Airline flight considerations require a plan. Check current baggage rules. For my camping and hunting gear, I need two duffel bags and a daypack (which fits in the carry-on). Last trip, the airline guy measured the duffels and billed them as “oversize” at a cost of an extra $200 one-way. Oddly, on the way home, however, they didn’t charge me. Also, check their policies on guns or archery gear well before booking. Check the TSA rules for transporting firearms and ammunition too! Print all the rules and bring a copy with you in case you run into someone at the airline or TSA that doesn’t know them as well as they should.

There may be an airline policy on a “fish or meat box.” Lots of people go fishing in Alaska, and the airlines sometimes allow a 50-pound fish box, which is easy to find around Anchorage, on the return flight. The box is a great way to get frozen meat home. Some airlines allow antlers under specific rules, some don’t. 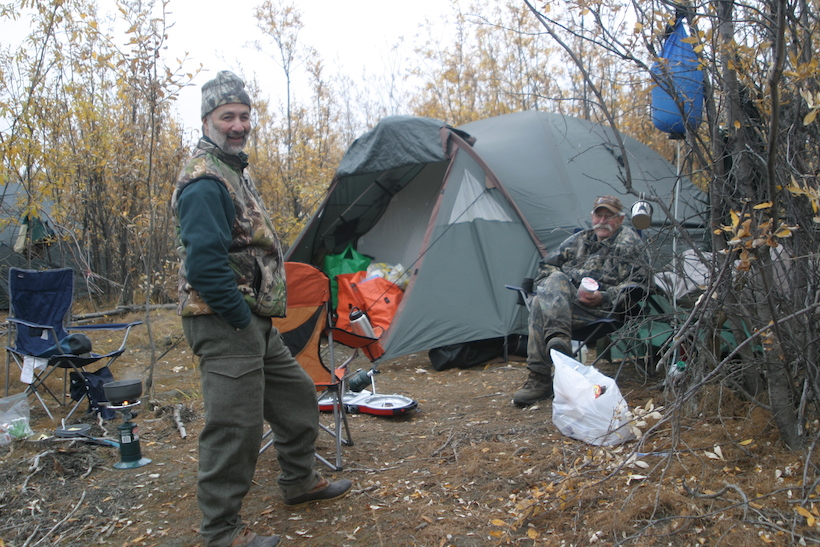 Go unprepared for Alaskan weather, with skimpy gear, and you’ll be sorry. Use the highest quality hunting and camping gear including clothing that you can afford. We use sturdy six-man tents on our hunts -- typically Cabela’s Alaskan Guide tents with aluminum poles. Spend a night in a 50 mph wind with horizontal snow, and I think you’ll agree. Be ready for rain, and lots of it. Take high quality rain gear; such as Helly Hansen Impertech or KUIU's Yukon is a favorite up there. Be careful when using down sleeping bags unless they are waterproofed down to the individual feathers. Things often get wet, thus most hunters prefer Quallofil or some type of synthetic bag because they are still warm even when damp. With a quality tent with a bathtub floor you can get by with a down sleeping bag. 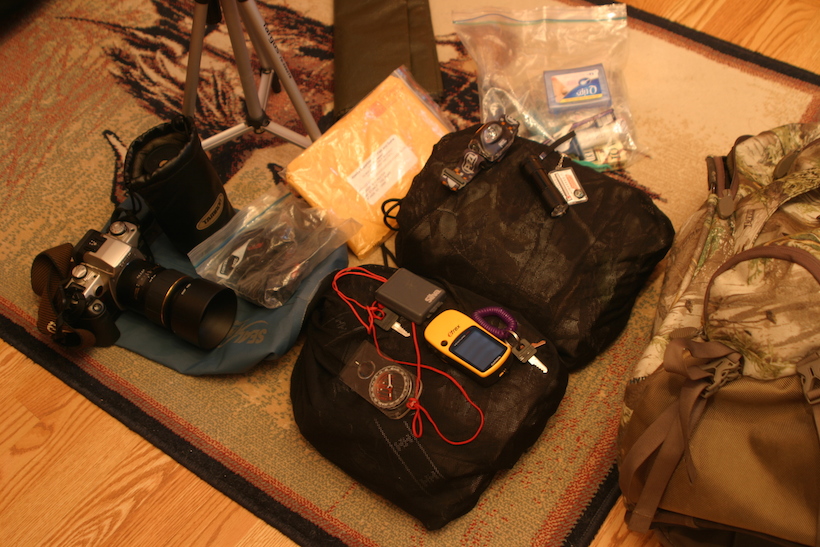 Among other items, a GPS unit is a must. Wide open tundra can fog in so thick that finding the way back to camp can be a problem. Also consider buying or renting a satellite phone or an emergency beacon; there’s no other way to get help in an emergency. When you spend days glassing for game, you’ll see the value of the best binoculars you can afford. Bring at least 10x42’s for the trip.

To make camp life easier, we typically borrow or rent cots and folding chairs from the transporter. A complete gear list accompanies this article. 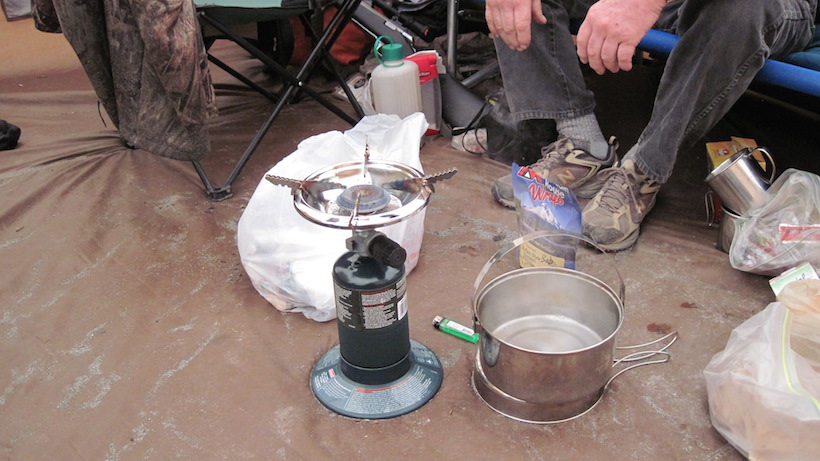 Hunting in Alaska builds up an appetite, and 3,000 calories a day is typical. Plan on bringing enough food to cover at least 2-3 extra days beyond the length of the hunt. If you get weathered in and can’t get picked up, you’ll be glad you did. Food is heavy and takes up a big portion of the weight allowance. Freeze-dried meals like Mountain House meals are great, but expensive. There are also dried meals right in the grocery store, such as oatmeal, rice, noodles & sauce and dehydrated drink mix that can supplement the food list. The dried stuff can be supplemented with a couple cans of meat, hot dogs, tuna, and (hopefully) some game.

Fancy cooking stoves that use special fuels might not perform great in the Alaska weather. In remote areas, you may not find the correct fuel cartridges if you need to buy after flying. We use simple one-burner Coleman stoves that screw on a propane bottle. Remember, you have to buy those there, they can’t go on the airline. You can find camper’s propane bottles in most places up there. Make sure you buy enough, as it often ends up being used as a heat source as well. 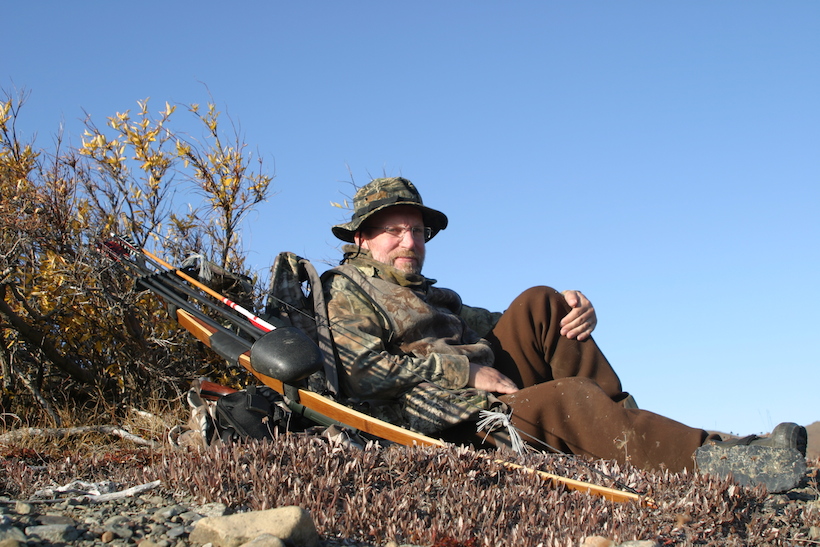 Step one for meat care is don’t shoot anything farther away from camp than you are willing to carry it. It takes me two trips to pack a caribou in, anything more than a mile or two at the most is too far for me.

The ADFG website has good information on meat care and you can also check out this article I wrote on meat care, including field dressing and quartering, plus the regulations for recovering all usable meat. We quarter the animal, get it in meat bags, then cut the ribs out, the neck meat, and the backstraps and tenderloins, and bag that separately. Don’t skimp on meat bags; get the best available.

The meat is then packed to camp (before the antlers per the regulations) where we try to build a rack out of brush to get it off the ground, and cover it with a tarp to keep it cool and dry until pickup. Some folks use citric acid to spray on the meatbags to keep flies away and help dry the meat.

ADFG does not mess around when it comes to meat care. If you don’t bring all edible meat to camp and care for it properly, you are looking at a huge fine. Once back in town (Anchorage) there are meat processors who will cut and package it and ship it to you. 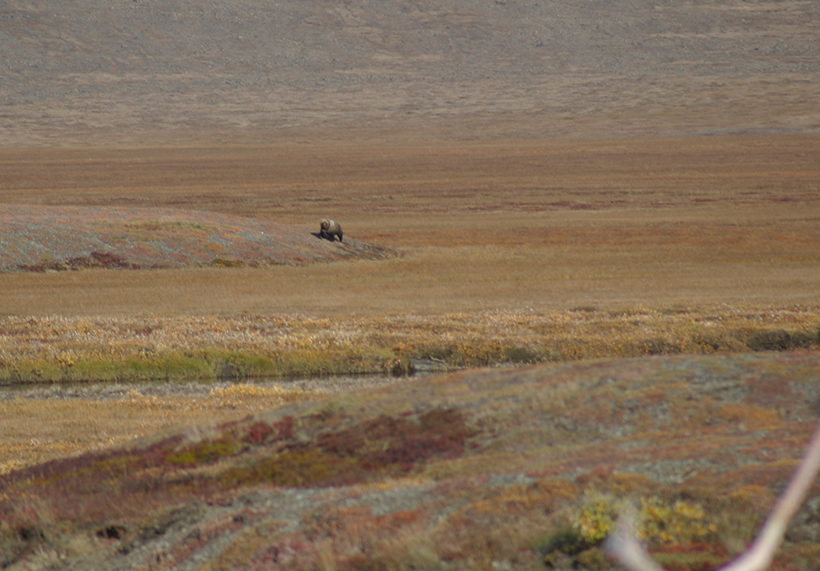 There are a lot of bears in Alaska, and there are two schools of thought for dealing with them: use a firearm, or carry bear spray. Each hunter has to make a personal choice. As a bowhunter, I carry a .44 magnum (largest handgun that I can shoot effectively). The handgun would be the last, last, and I repeat last resort. My hope is that an aggressive bear would run at the sound of a warning shot. I have a friend who hunts with a rifle, but he uses one big enough for both caribou and protecting himself.

Bear spray is effective, but it doesn’t work well in the wind or heavy rain, which happens frequently. The downside to bear spray is you can’t take it on an airline; no bush pilot wants it inside the cabin either. Check with your transporter to see if you can get the spray where you are hunting, and if they will fly with it.

I’ve had a couple of bear encounters up there and my friend who lives there has had far more. In general, try to avoid bears. Keep a clean camp, be careful dressing and packing game, and keep meat 100 yards or so downwind of camp. On one trip, a grizzly kept walking around the tent at night and messing with the meat pile, but fortunately he decided to move on without taking it. While most bears want nothing to do with people, you still have to be prepared to deal with them. 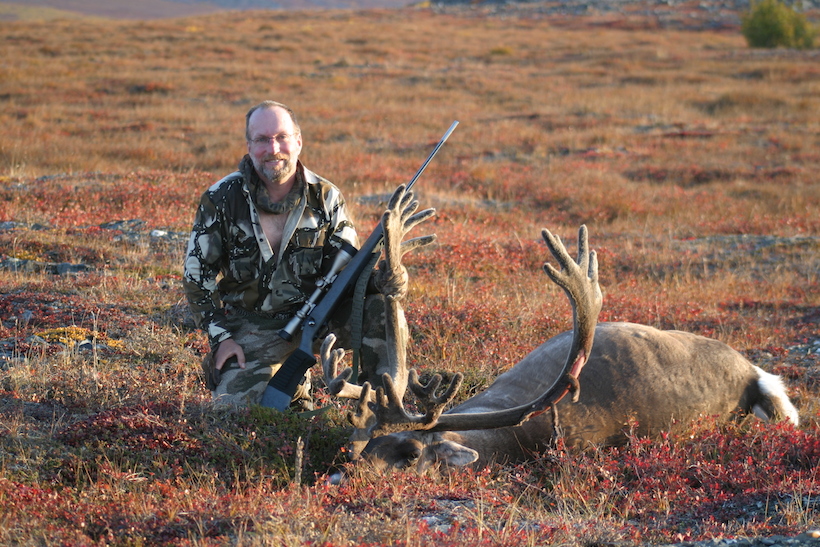 Be flexible once you get there. Like all things we dream, the reality is never quite the way we imagine things. I’ve had caribou trips where we saw thousands in a week and trips where we saw 20 or less. You can’t plan on what the animals will do on a date a year in the future, but you will certainly remember these hunts whether you bring home game or not.