The science behind the mule deer rut 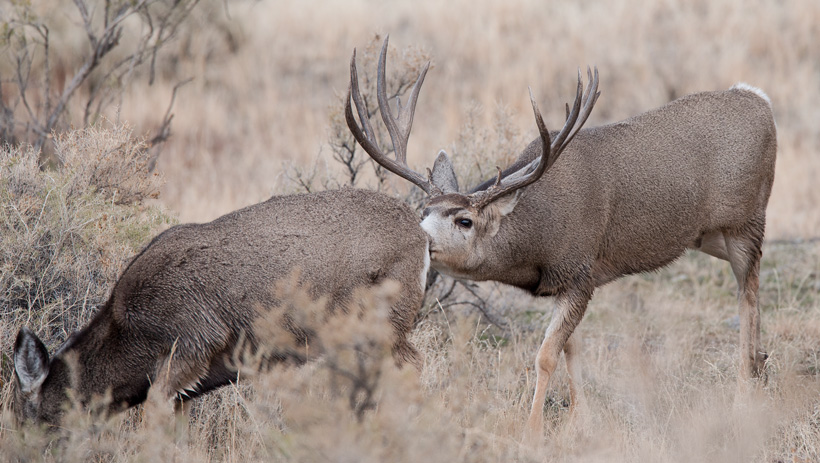 This article was a collaborative effort by Dave Loescher and Brady Miller. Photo credit: Shutterstock

Note: This article was originally published in November of 2015. Some of the data has been updated to reflect more years of data.

Every year it seems that mule deer hunters are divided into two camps: the early season high country velvet enthusiasts and the late-season hunters with hopes of capturing the excitement of the peak rut. Each hunting extreme has its distinct advantages and disadvantages. Although the early season high country craze is hitting its stride in popularity (thanks to growing swarms of ambitious hunters wanting to become known as backcountry experts), the late season rut hunts will always be the most coveted of mule deer seasons.

Hunt while their defenses are down 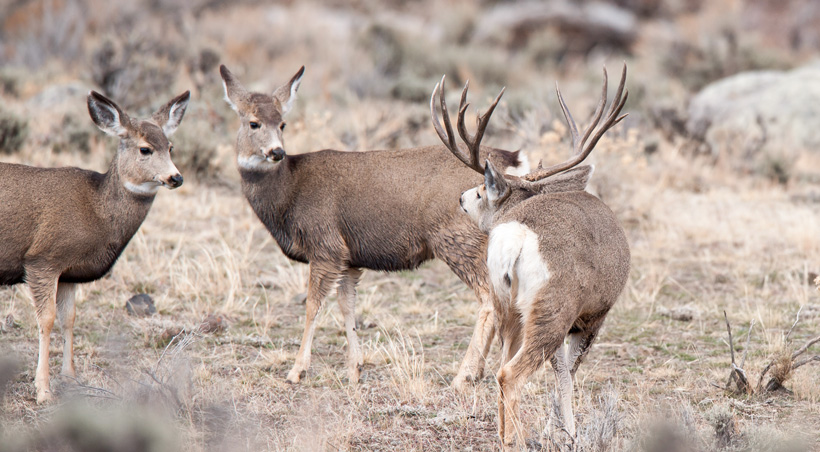 Late season rut hunts find otherwise cagey bucks letting down their defensive instincts. This is the time when bucks are clearly most vulnerable as well as most active in daylight hours. This short period of intensive rut activity averages roughly ten days and has become the reason for many hunters to amass double-digit bonus points in an effort to get one chance to hunt large, swollen necked bucks void of their wits.

The myth of cold weather 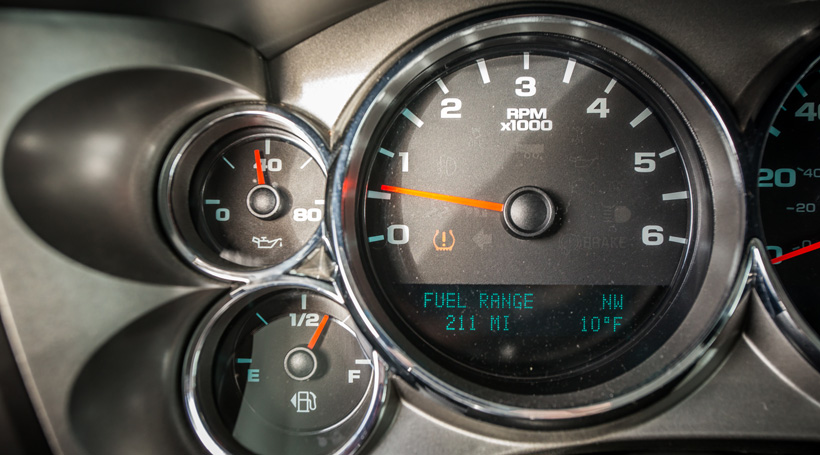 Cold weather increases deer movement, but it's not the pure driver of the rut. Photo credit: Brady Miller

“If the weather is cold, then the rut will be on fire!” This is the statement heard over and over every year. Most hunters do not realize that the cold temperatures are not what starts or drives the mule deer rut. Cold weather is beneficial to keeping deer on their feet and on the move, making them easier to spot. Hunting active deer is always more exciting than lethargic deer hidden in shady, cool places. Yet, contrary to popular belief, the cold weather is not what kicks off the rut.

What really starts the rut?

The truth is that photoperiod is the driver of the rut. Photoperiodism is defined as the physiological reaction of organisms to the length of day or night. In other words, the length of daylight experienced over a 24 hour period. This is the primary factor in determining the breeding season at a given latitude. Near the equator, where the length of day doesn't vary much, fawns can be dropped in any month of the year. At latitudes like ours in the West, photoperiod follows the same pattern year after year and the rut is triggered at about the same time. A great tool for determining the amount of daylight per day based on latitude can be found here.


Based on the chart above, you can see the variance in peak rut dates based on the photoperiod.

Below is a graph of the table above to show the differences based on latitude.

Other factors affecting the timing of the rut

Nutrition can also affect the timing of the rut. The condition of the habitat in terms of feed and water will greatly impact not only the timing of the rut, but the intensity of the rut as well. Poor nutrition and intense drought can cause the rut to begin later. Conversely, a good feed year can push the rut earlier. In times of severe drought, it is not uncommon for does to shorten or miss their cycle and focus on finding feed to stay alive. This is a rare situation but can happen on occasion.

The magical days of the rut 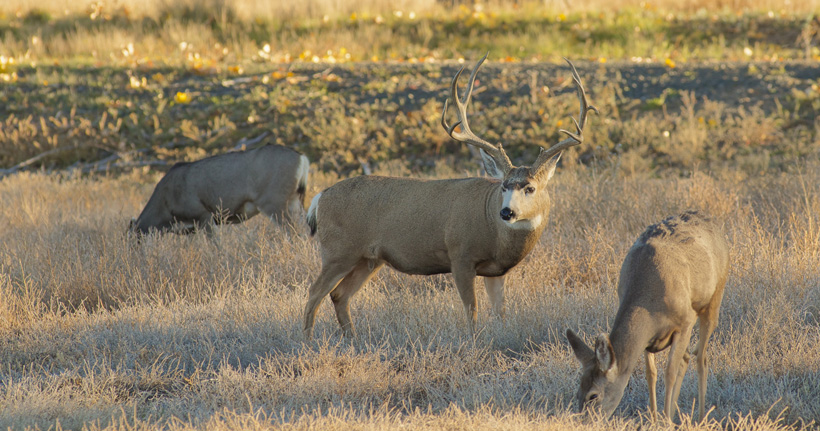 When the stars align and you find yourself in the field during the peak of the rut, the anticipation is high. Bucks are easily found either with does or moving from group to group. Bucks abandon their wits and put on one of the most awesome behavioral displays of the year. Bucks chase away bucks, spar with other bucks for dominance, run after does and stand with their noses held high with the occasional lip curl while smelling the surrounding air. It is an awesome behavior to observe, especially with a tag in your pocket.

Determining the peak days of the rut in your area

Mule deer average 202 to 210 days for gestation. Gestation is defined as the length of time a bred doe carries a fawn before giving birth.

Touch or click on the state in the graphic above for peak rut dates.

In the mountain states of Wyoming, Montana, Idaho, northern Utah, northern Colorado and northern Nevada, the Rocky Mountain mule deer generally have the peak fawning period during the first week of June. If you start with June 7 and count backwards 205 days for gestation, that would place the peak rut dates in the mountain states during the week surrounding November 14. As a general rule, the mule deer fawning period is later as you travel south. The desert mule deer of Sonora and southern Arizona generally have a peak fawning period of around August 7. Subtracting 205 days would suggest that the average peak rut for these extreme southern desert mule deer would take place the week of January 14. The mule deer in the areas between these two examples will rut at a time between these two extremes. If a doe is not bred, she will be receptive again roughly 30 days later.

What about the pre-rut?

Some avid mule deer hunters will argue and say that they would rather hunt the beginning stages of the rut rather than the peak rut — and for good reason. These early stages of the rut are often referred to as the pre-rut among hunters. The pre-rut is usually the two-week period that is prior to the peak of the rut. During pre-rut, we find bucks cruising in search of does and moving carelessly about at otherwise inactive hours. This behavior makes bucks vulnerable. The other major advantage of the pre-rut is that bucks are rarely carrying broken racks because aggressive fighting has not yet started. The major risk to targeting the pre-rut is that not all bucks will be on the move. Some of the oldest bucks will continue to move very little until the first does actually begin to cycle into estrus.

Selecting your season to fit the rut

The first step is to identify the typical rut week for the state/area you are considering. State agencies across the West have different approaches when it comes to setting season dates. Some states offer season dates that coincide with the peak of the rut.

Montana is the overwhelming king when it comes to providing peak rut opportunity to rifle hunters. Nearly every hunt district in Montana will allow hunting during mid to late November. Another opportunity — and one of the most coveted — is with a Colorado fourth season rifle tag in a unit in the northern half of the state. The caution with the Colorado fourth rifle season is the short number of hunting days. At only five days in length, one severe storm can quickly cut your hunt in half. The mule deer in the southern units of Colorado rut later than the rest of the state and typically will not capture peak rut activity like the central and northern Colorado units. Idaho also provides some great rifle and muzzleloader peak rut opportunities. Peak rut rifle opportunities for mule deer are very limited in Arizona, Nevada, New Mexico, Oregon and Wyoming.

One of the most overlooked and hidden peak rut opportunities is buried in the archery seasons. Arguably, some of the best mule deer hunting in New Mexico is offered as a January archery season. Although this season opens on January 1, it can still capture some late rut action and is capable of offering some of New Mexico’s best mule deer hunting. Nevada also has some very good rut seasons offered exclusively to archery hunters. Utah also has a limited number of peak rut archery seasons offered. The extended archery seasons in Utah offer seasons that include the entire month of November. Arizona and Idaho both have over-the-counter archery tags available that offer season dates that will allow you to hunt during the rut.

Most units across the West have migratory mule deer herds. In many locations, this migration will coincide with some phase of the rut. The pre-rut is the most commonly found behavior among bucks as the migration is taking place. Regardless of the phase of the mule deer rut, when you combine migrating deer with bucks chasing does, you could be in for the time of your life. This scenario is exactly what most western hunters are trying to find.

Across the West, the large majority of mule deer hunters take to the field in the month of October. Although some states like Montana have their general rifle mule deer seasons scheduled in November, most states (Utah, Colorado second rifle, Wyoming rifle, Nevada) have their high tag quota seasons scheduled for the month of October. According to Boone and Crockett, the month of November stands supreme for producing the highest scoring bucks since 1990. Taking this into consideration, it is evident that the majority of B&C qualifying bucks are harvested during pre-rut and rut behavior patterns. 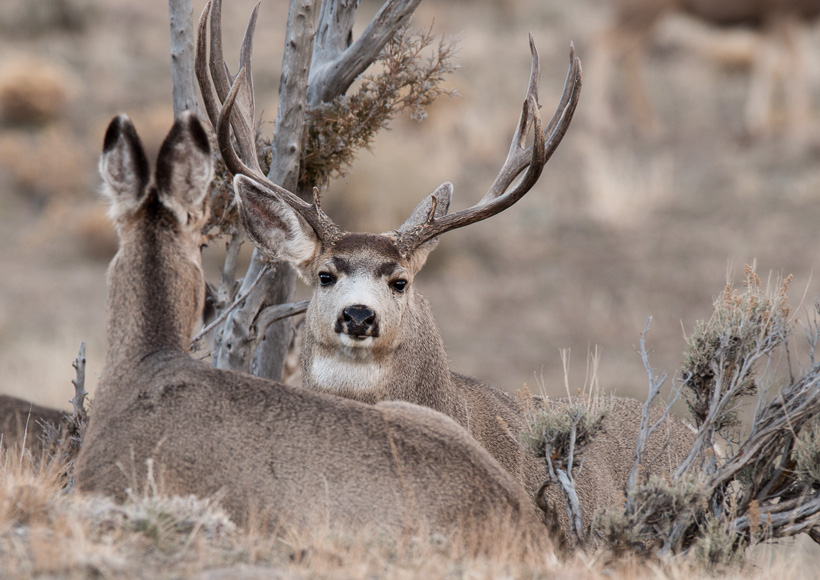 If an exciting hunt and a chance for a long-haired cape on a hard horned muley is what you are after, then hunting the rut is your answer. Truly understanding the rut will help you to make this dream a reality. Use our Unit Profiles and Filtering 2.0 to search out areas that will provide the terrain and habitat that should provide rut action. The profiles will also help you find the units with the trophy quality you seek. Do your homework and go make a memory!

This goHUNT INSIDER article has been made available to nonINSIDERS.
Learn more about what INSIDER has to offer here.