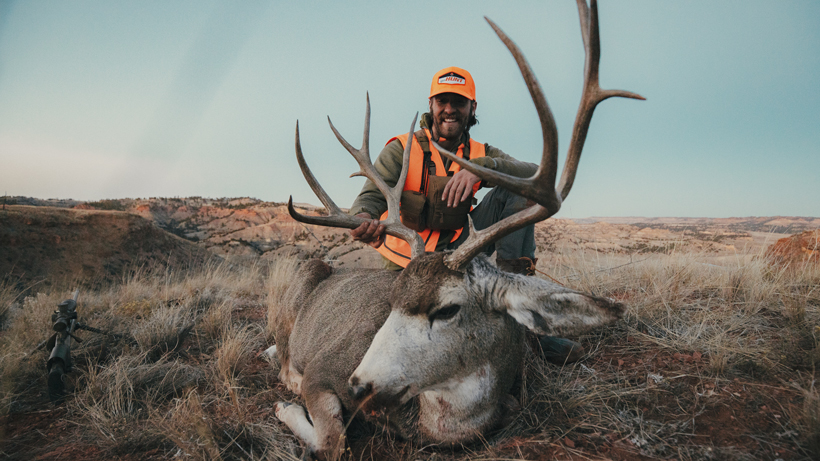 Mule deer are a native species to North America that are thriving all over the West. They can live at elevations above tree level to sea level. Mule deer can survive in lush, forested environments as well as open desert sage. They indeed are the monarchs of the West with some bucks grossing over 200“ in measured points. Some mule deer migrate to wintering and summering grounds and some keep a tighter home range. Hunters from all over the United States and the world head to the western states to chase bucks throughout the fall and winter; however, each month, mule deer bucks do something different. Here is a month-by-month breakdown of expected mule deer behavior from August through December. This breakdown can give you a good idea of what to expect and where you might find bucks hanging out during any given month for hunting season.

During the month of August, bucks are typically in bachelor groups that range in size from two bucks all the way up to a dozen though many mature bucks will only hang out with a few other mature deer. Since March, they have been growing their antlers and, now, the velvet has pulled tight into their antlers. Bucks at higher elevations will hold onto this velvet into September, but some smaller bucks and other bucks that live at lower elevations will begin to rub off the velvet towards the end of the month. The days are hot, so bucks will typically seek the shade of trees and are often seen bedding out in the open under a solitary tree, scanning the area for danger. During this time of year, bucks mainly concentrate on feeding, staying cool and being near a water source. Mature bucks tend to prefer higher elevations since higher elevations are cooler and the prevailing winds keep the bugs to a minimum. If you are hunting during August, do a lot of scouting and watch open meadows an hour or two after first light and an hour or two before dark. Besides the rut, you will see the most daylight activity during this time of year.

During the beginning of September, bucks will still be in their summer routines, heading from feed to bed along a similar, patternable path. Once they start to feel the pressure of some hunters, they may be more reluctant to travel during the daylight hours and will most likely reduce their daylight activity level. Typically, towards the middle of the month, most will start to rub off their velvet — even at higher elevations. Hunting along these rub lines may be a good idea, especially if you see some fresh rubs and good deer sign. Early cold nights will freeze some of the deer’s higher elevation forage and bucks may adjust their patterns to find better food. By the end of September, hunting pressure, weather and food changes will typically put mature bucks in some thicker timber and on a primarily nocturnal timeline. Many hunters choose to glass at first and last light and then still hunt through some thicker timbered areas mid-day, especially if they are carrying a muzzleloader.

By October, bucks have left their bachelor groups and are mostly traveling solo. They have also left the lush open, high elevation meadows and are finding protection and better food by utilizing the cover of thick middle elevation timber. Their antlers are hard, their daylight activity is at a minimum and they can be challenging to find during this time of year. Towards the end of the month, they may start transitioning to a pre-rut area — near zones that hold more does. Smaller bucks tend to do this first with bigger bucks following when they are ready. Snow can be a common occurrence during October; however, mature bucks can hang back in a foot of snow if it means they have better access to cover and protection from hunters. Try glassing at first and last light, still hunting through thicker timber mid-day, putting on deer drives and following fresh tracks in the snow to find success during this time of year.

November can be a magical time for mule deer hunters hoping to harvest a mature buck because anything is possible. Bucks will begin to rut as does begin to show signs of estrus. The smaller, younger bucks will start to harass does first, but the big bucks will swoop in to establish dominance and breed with the does when the timing is right. It is common to see bucks on their feet any time of day during this season, pinning does down in less than ideal areas. Ultimately, your job is to find does and, eventually, the mature bucks will find them too. Elevation will be less and less during this month and bucks can be seen along highways, in agriculture, on the foothills and at higher elevations during mild winters. Hunting along ridges, saddles and funnel points near areas of high doe activity can prove very effective during this time of year.

The beginning of December can still produce bucks in rut behavior as some of the younger does continue to come into estrus and some does that were not bred come back into estrus. Some deer will be migrating while the rut continues since snow and lack of food will keep them moving towards wintering grounds if they are not already there. Bucks have been worn out throughout the last month because their number one concentration was on breeding and not feeding. During the middle to end of December, expect to find mature bucks in recovery mode. This often means they will seek out some of the best food in the area — usually a farmer’s agriculture field. Hunting private land can be very effective during the later seasons of December when it is common to see multiple mature bucks out feeding through the day, especially when temperatures are extremely low.

Mule deer bucks follow similar patterns and behaviors year after year. Yet, it is important to note that the bucks in eastern Wyoming may act differently from the bucks in Arizona if the weather is drastically different. However, you can bet that bucks will go from bachelor groups to being solo, to chasing does and then into recovery and survival mode no matter where they are. Learning how deer behave and how to hunt them month to month can help you be successful this year and for years to come.

More mule deer-related articles you might find helpful this season: