Hunt where the deer are, not where you think they are 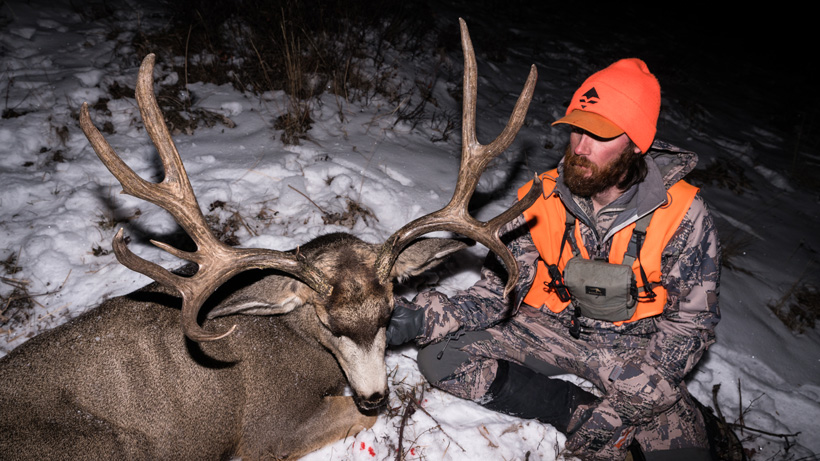 Getting away from the crowds, lead to an unpressured area where this buck called home. Photo credit: Chris Neville

If someone tells you there are strict rules to finding mule deer during each season…run the other way. Hunting mule deer—and mature mule deer for that matter—is more of an art than it is a science.

What a mule deer buck does in a daily routine throughout the year is rooted in science (feed, cover and water). But science can be thrown out the window when you are hunting an old mature buck that has seen years of hunting pressure.

Knowing that hunting mule deer is an art is the most important part of the deer hunting puzzle I’ve gained over the years; learning the nuances of the what and where and how to find big and mature mule deer. The science is still very essential to understanding the habits of mule deer, what type of feed they prefer and their yearly pattern of movement, but it’s the other parts that can ultimately pay dividends in your success.

When it comes down to it, there is no right or wrong place or way to hunt mule deer. I actually 100% believe this to be true. That is why no matter how many articles you read, podcasts you listen to or videos you watch, mule deer will ultimately be where they are, not where you think they are. The last part of that sentence contains vital information that I’ve focused on over the years. You need to be hunting where the deer are during that particular week and, on a more micro level, you need to be hunting where they are that day in order to be successful. Learning that takes time in the field.

Get away from the crowds

Several instances during multiple October and early November mule deer hunts over the past few years really hit this fact home to me. During those hunts, I’d taken a handful of bucks in places where people told me I’d never find bucks. And, by people, I mean certain friends who heard what I did after the hunt and others who told me that what I’d been accomplishing lately was due to luck.

Here are several examples: In 2016, I shot my first real buck of a lifetime on a Colorado 3rd season hunt in November above 10,000’. This was a 3rd season hunt that was plagued by abnormally high temperatures. These temperatures were so warm that I was hiding behind small trees in the shade as I made my stalk on the buck I shot to avoid the burning heat of the sun. After I returned, I was told that, while I was still crazy for hunting that high, it was a fluke that I had success and that bucks “only” hang out between 6,000’ and 8,500’ elevations during that time of year.

The key to my success on that hunt was hunting where the deer were, not where everyone thought they were. This set me apart and helped me avoid the crowds. I hunted higher elevations than what some would consider deer elevations during that time of year and had phenomenal success.

Back to the fluke example I gave above…I’ll be the first to say that hearing that comment further sparked a fire in me to keep doing what I was doing as I knew that other people wouldn’t hunt the same areas I was hunting. In my head, if you always do what 95% of the hunters do, then you will have success like 95% of hunters do. If you want to take a buck that maybe 5% or less of the hunters take, try to think outside of the box. 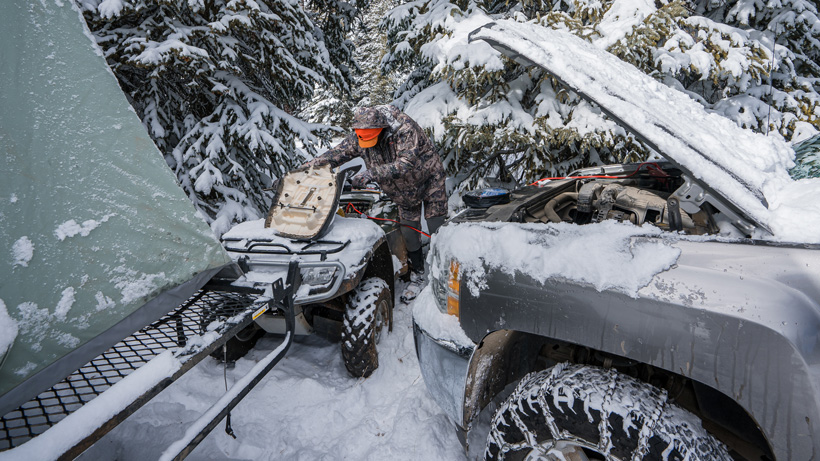 It was so cold that my ATV battery died. So I used my truck to jump-start the ATV. I originally planned to day hunt from this location... but that plan changed fast...

Fast forward to my next Colorado 3rd season hunt in 2018 when I again bucked the trends, resulting in me taking the best buck of my life. The hunt was a perfect storm of sorts: tons of snow and very cold temperatures. There was so much snow that I got a little worried we would get snowed in, so I made plans to pack up camp and get my truck off the mountain.

The road I originally tried to use was now snowed in. There was pressure from hunters hunting the lower country, but no one was hunting the high elevations. So we decided to relocate and backpacked to higher elevations where I had originally wanted to hunt. Hunting was tough, but we didn’t see any other hunters. Finally, after glassing the same piece of dark timber each day, a true giant emerged and I made the shot count.

Here’s another example: it is well known that on later season hunts under ideal conditions, you should seek out migration corridors as that is where deer will start moving into once heavy snowfall blankets the mountains or the hint of the rut hits the air.

But what happens if you look at those migrations routes backwards? What do you see? If you take note of a migration route, you’ll see that they start from a higher elevation and move downward. So, if you happen to have a chance at mild weather, you can use this to your advantage and hunt above the “typical” migration corridor. This is a great strategy on late October hunts too.

What do mature deer do if they sense pressure from hunters and, at the same time, have all their nutritional requirements at higher elevations? They head to those so-called “unusual places.” What I mean by this is if mature mule deer sense pressure from hunters in late October and early November, why would they want to move to lower elevations where there are more hunters, more commotion and an increased chance that they will get shot? If higher elevations still have the nutritional requirements as well as safety, then a giant buck will not risk moving into the firing range. This is what I believe happened on my 2018 Colorado hunt.

How it looks, might not be what it holds 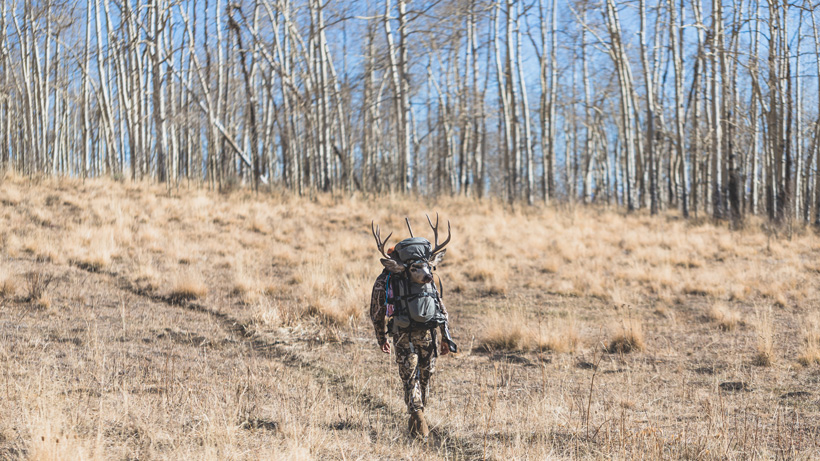 One part of mule deer hunting that is hard for even me to let go is to stop being fascinated with how the area looks. A spot can look perfect, but still holds zero deer. You need to be focused on what the area holds and why it is holding deer there. If you think about the “why” once you find deer, you can start to piece together the puzzle for future hunts. 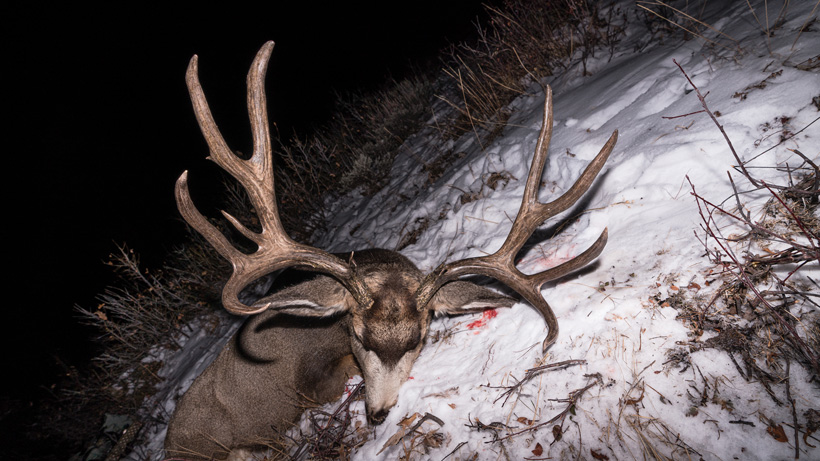 In the end, I really hope this article helps you to think outside the box. Remember that the end-all solution of any hunt is to hunt where the deer are. If you want a mature mule deer, you need to think like a mature mule deer and analyze the season, weather, and the hunter pressure you are experiencing.

It goes without saying (and it’s easy to write this), but if you spend the time required to find the core zone where the bucks are, then, you will have the hunt of your life. Always remember that if you’re not finding bucks, you need to change how you approach the mountain. Keep in mind that sometimes it is not all about how far you can get from a trailhead, rather a steep hillside within a mile of a trailhead or road could be an overlooked spot. If the terrain involves a lot of uphill or downhill climbs, you instantly eliminate the majority of hunters. And this goes back to the title of this article, hunt where the deer are, not where you think they are. If you think mature deer are in the easy to access terrain, odds are, hunter pressure has probably pushed a mature buck out of that spot already.

While writing this article, I kept seeing a common theme in my success and that was doing what other hunters are not willing to do. Now, I also agree that not every buck thinks this way and that is fine by me, but at least I feel like I am putting myself in the right mindset and position to have a great hunt when thinking outside the box. Keep in mind that mule deer hunting is a dance and the mountain always leads.