How long can you wait for your monster buck? 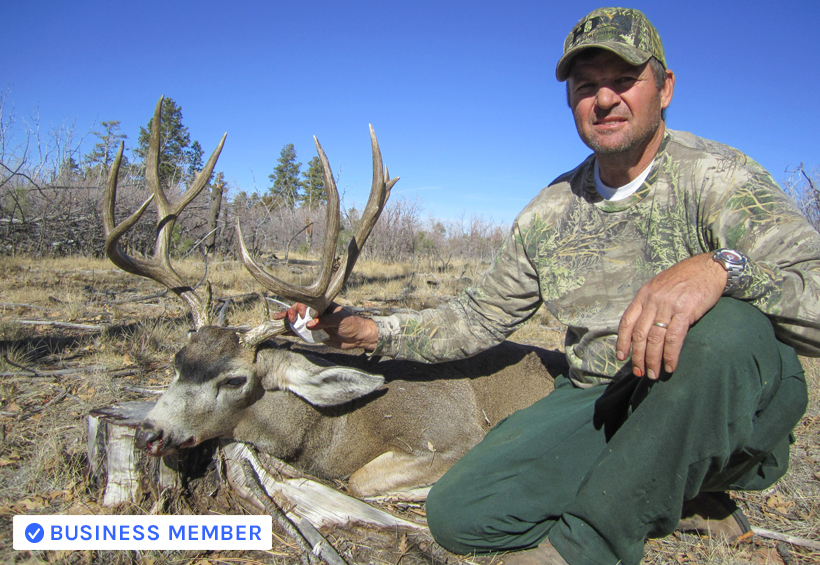 I talk to hunters every year that say they either want to hunt deer on the Arizona Strip or not hunt at all. With that attitude and that draw strategy they may never actually hunt mule deer in Arizona. Over the years, I have read in a variety of publications that are considered the "experts of western big game hunting" that the Arizona Strip is the best unit to hunt and should be the only area for a nonresident to consider applying for a coveted tag.

While I would agree 100% with the conclusion that the Strip units are the best deer units in the state of Arizona, the question remains: can you actually draw a tag? It may come as a shock to many nonresidents that unless you have obtained the maximum number of bonus points it is likely that you will never draw a tag for Unit 13A or 13B. In fact, no nonresident has drawn a rifle Strip tag in the past ten years without having the maximum number of points. Additionally, the number of nonresidents entering the maximum bonus point pool by obtaining a hunter safety point is nearly the same as those coming out by actually drawing a tag.

Here are some specifics

Going into the 2015 Arizona draw there are 147 nonresidents with 18 maximum bonus points. There are another 136 (most of which are nonresidents) who could move into the maximum pool if and when they obtain their hunter education point. This means that with the current level of rifle tags in 13A and 13B issued to nonresidents (with the current 10% nonresident cap) it could take over 20 more years before you even have a chance at an Arizona Strip tag if you do not have the maximum number of points right now. The Arizona Game and Fish Department is talking about changing the system so that nonresidents who are below the maximum number of points could have a chance at a tag, but do not hold your breath. They have been talking about this for years.

Is it worth the wait?

So why wait for a Strip tag when the famed North Kaibab is available to hunters to harvest 175-200" bucks? We consistently harvest these types of bucks on the Kaibab each year. I have been hunting the Kaibab since the 1970s and it is as good now as it has ever been. The late rut hunts are hard to beat, but the late seasons in Units 12A East, 12A West and 12B require near maximum bonus points to draw a tag (16 or more). If you draw a late season tag on the Kaibab, you will see hundreds of deer each day and 20 to 30 of them are mature bucks. Talk about an exciting hunt! There is nothing more fun than sitting on a hill and watching the bucks chase does, and push each other around as you look them over in order to decide whether it is time to end your hunt or wait a little bit.

You can see more bucks in one day on the Kaibab than you can during the full ten day hunt on the Strip. I know an accomplished hunter that hunted the Strip three times and never killed a buck! That is how tough the Arizona Strip can be to hunt. It is hard to keep most hunters happy and motivated to hunt when you are not seeing any deer. In contrast, on the Kaibab, when you are seeing 20 to 30 mature bucks a day, it is exciting to get out of bed and get up on a hill to start picking bucks out of the cedars and sage brush. I get excited just thinking about the late Kaibab hunts. 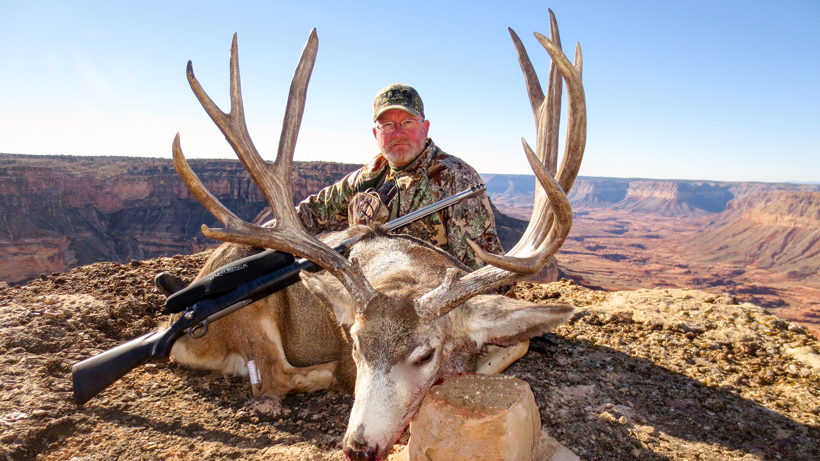 After talking with Ryan Anderson of Utah last year about this exact subject, he decided to give up on his dream Strip tag and, instead, draw a west side late deer tag. He killed the biggest buck of his life. Ryan said this about his hunt:

"Going into the hunt, I only hoped for a fun hunt, with a good guide, and that I'd kill a 180" class buck. But it all turned out so much better that I had dreamed. My buck broke the magical 200" mark and my guide, John Adams, co-owner of High Point Outfitters, was as good of a guy as anyone that I know. I have no doubt that I never would have killed a buck like that without his knowledge of the Kaibab and his hard work prior to my hunt." 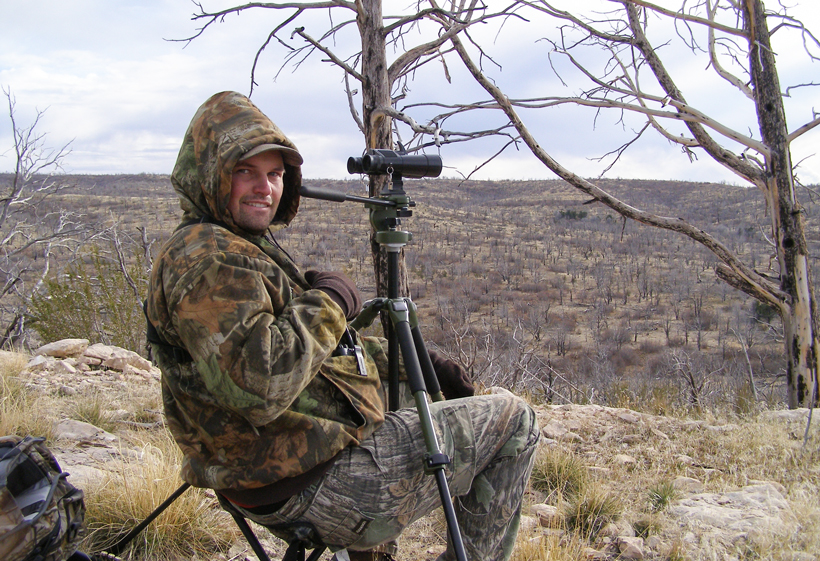 We prefer the west side Kaibab on the late hunts simply because a great result does not depend on the weather. You can find good bucks on the west side whether you have a foot of snow on the ground or 60 degree temperatures. This is because the west side has the habitat to hold the big bucks in all kinds of weather. The east side, on the other hand, has less transition country. If you do not have the weather to push them off the plateau, most good bucks remain in the Grand Canyon National Park and are not available to hunt. Why chance unpredictable weather when the west side does not have that risk? Yes, we do take great bucks off the east side, too, with good weather and I would take that tag personally if I had it, but the west side is preferable because you have less to worry about. 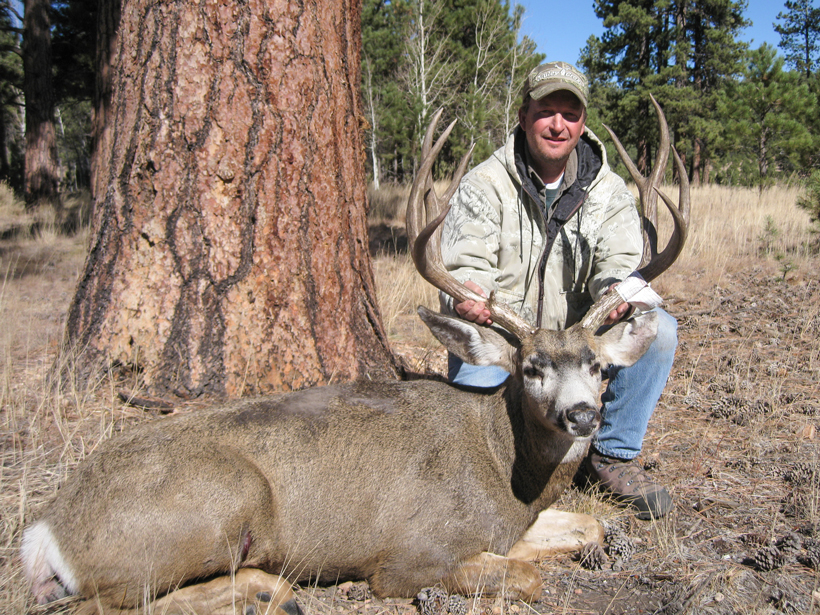 The early seasons on 12A West and 12A East, which can be drawn with far fewer bonus points (roughly 8 points will guarantee a nonresident tag), can be a bit more challenging due to the higher tag numbers, but they are still a quality hunt. I prefer the east side on the early hunts due to the lower tag numbers than during the early west side hunt. The Warm Fire that burned a good portion of the east side Kaibab in 2006 really opened up some great country for glassing and the feed is second-to-none.

The Warm Fire was reported to have burned 59,000 acres -- most of which is on the east side Kaibab. During the past seven to eight years, the east side has been very productive during the early hunts. One of the biggest advantages of the early hunts over the late hunts is that you can locate a buck during the summer months and keep track of him. Then, the buck will be in the same location during the October hunt dates. Very rarely will the deer migrate off the top of the plateau before the early rifle hunt starts. We also tend to harvest 170-190" bucks on the west side during the early hunts even though you have more hunters to deal with.

Application strategy for the Kaibab

Depending on how many points you have and how soon you want a tag, I make the following three recommendations:

If you have more than ten points I recommend you put in as your only choice for the late west side and hold out for that tag.

I recommend you put in for the late west Kaibab as your first choice and the early Kaibab east side second choice with less than ten points.

If you have less than five points I recommend you put in for the early Kaibab east side first and early Kaibab west side second, if you are ready to come hunt mule deer in Arizona. 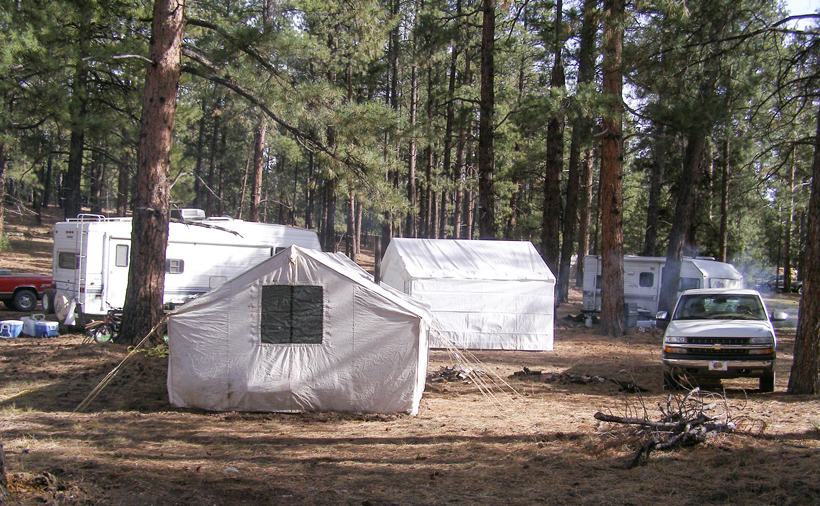 Difficulty in the Strip vs the Kaibab

Another thing all hunters should consider are the logistics to hunt the Arizona Strip. You will most likely be camping 100 miles off the pavement. For that kind of a hunt, it can be difficult for some hunters to haul fuel, food, emergency supplies and everything else that they may need. If you hunt the Kaibab, you are usually camping within five miles of the pavement, which means easier access to fuel, food and anything else you may forget or any emergency items you may need. Simply put, there are fewer things you have to worry about that can go wrong, which allows you to concentrate on killing a big buck.

In the last 30 years, I have personally hunted the Kaibab eight times with my own rifle tag. That is an average of once every four years. During most of that time, I have put in for the Strip as my first choice, but I have never been lucky enough to draw that tag. That is how difficult the Strip is to draw — even for a resident — and it is ten times harder for a nonresident in the current system. I have been hunting and guiding the Kaibab for the past 30 years and have only missed four years during that time frame. It has become a big part of me. It is my favorite place in the world to hunt mule deer.

So I would sum up the answer to the question in the title like this: If you are determined to kill a 230+" buck, you better wait for another 20 to 30 years and hunt the Strip and hope that if/when you finally do draw your tag, that it is not in a drought year. But if you like to hunt 180-200" bucks, then get to the Kaibab and get to hunting mule deer! The Kaibab -- there is no better place for me!