Why carrying multiple optics are essential for locating more deer 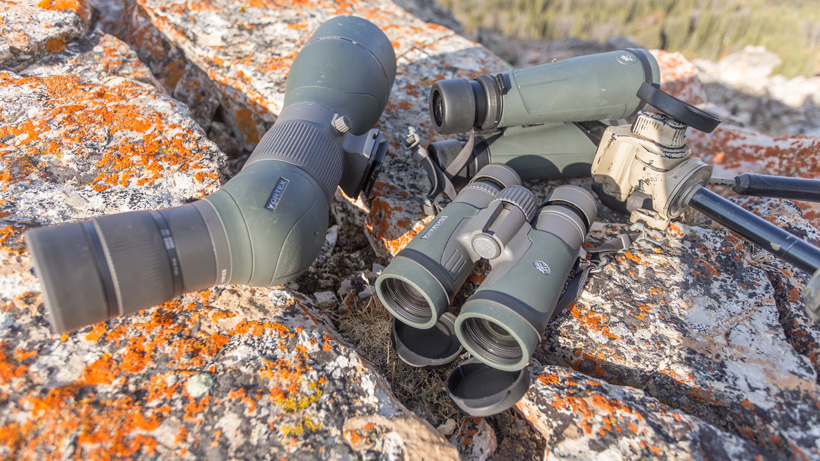 When it comes to hunting, you can’t harvest an animal until you find an animal. Quality optics pay huge dividends in every type of terrain. This is where quality optics come into play. If you’ve read my past articles, you know I’m addicted to gear and kind of an ounce counter. The sole reason I’m an ounce counter is that I’m willing to sacrifice in some areas of my backcountry system, so I can justify packing around giant optics to find animals and camera gear to capture the memories.

The past few years I pretty much carried everything in terms of optics.

The majority of hunters are probably carrying 10x42s and a spotting scope in the 65 to 85mm range. I ran that exact setup for a long time, but the past five seasons I’ve added yet another pair of optics to my arsenal and I feel like I’m way more effective in the field after making this change. When it comes down to it… being able to find more animals is the "magic" we're all looking for. I now pack three pairs of glass with me on all of my hunts; 10x42 binoculars, 15x56 binoculars and an 85mm spotting scope. With that said, I might be changing up my system on certain hunts...

Below I’m going to describe several different optic options and my thoughts and experiences using them. There are plenty of other methods out there, but these are systems that are fairly easy to build and might not break the bank as much as others.

Large binoculars definitely have their place in mountain hunting or even lowcountry deer hunting for that matter. To me, 15s are quickly becoming the single most important piece of optics that I own and have a huge advantage for the mule deer or Coues deer hunter.

My typical glassing session starts out by using my 10s to quickly scan basins or coulees for deer that might be close by. I’ll then switch to 15s and this is where I’ll really dive in and pick apart the terrain in a grid pattern. While glassing with the 15s, I’ll be switching back and forth to my spotter to check out the bucks I’m glassing up or to confirm or deny a deer body in timber for example. Each November I take my dad and brother hunting for mule deer in Montana, it always amazes me how many more deer I find using my 15s off a tripod compared to them with their 10s handheld.

I also run the 10s off my neck in a bino harness to use while stalking in close on an animal.

It’s hard to beat this three binocular system and I this leads to an exponential increase in finding animals. The mid-morning and middle of the day I love glassing for long periods of time with my spotting scope, but this has the tendency to strain my eyes. So when that happens I will switch to 15s for a while (this switch doesn't allow me to sacrifice on my long range glassing). 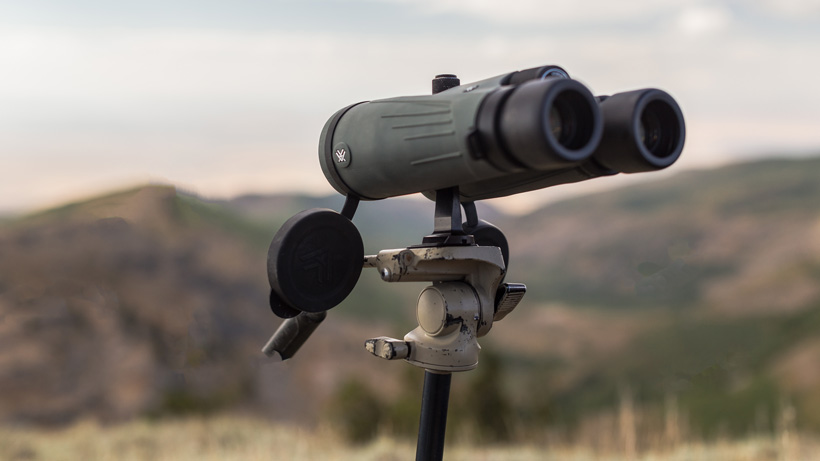 15s are a true workhorse when you’re glassing all day long and trying to pick up the slightest movement. I fell in love with 15s when I hunted Coues deer in Mexico and since then I've been running them on every hunt. Note: 15s are way too much for handheld use. With some practice you might get decent with them... but I feel they are way too much power when bowhunting and their bulkyness and weight are something that I just can't get used to around my neck. 15s also have a smaller field of view, so they will be difficult to use when stalking in close to an animal. With all that said, I believe the tripod mounted 15x binos are extremely effective for finding game and much easier on the eyes for extended use but the spotter is still mandatory for assessing trophy size.

Using 12s and a spotting scope

I really love my 15x56 binoculars and they are my goto pair on the mountain. But… carrying three pairs of optics is starting to get old especially when they are tipping the scales at over 8 pounds in my pack! The main reason they are starting to not fit in my system is that I’m also carrying a large DLSR camera, three lenses, extra batteries, etc on all my backcountry hunts.

Because of this, I’m thinking about running a pair of 12x50 binoculars off a tripod and also carrying a spotting scope to save some weight in the backcountry. I've borrowed a pair of 12s on a scouting trip and instantly fell in love with them. The 12s still have great magnification and field of view, and only running two pairs of optics will greatly cut down on my pack weight. The 12s I’ve tried out can easily be ran off a bino harness and are not too powerful for handheld use and would still be effective while bowhunting.

Overall, the 12s are very powerful and would be the perfect optic if you’re going deep in the mountains and are looking to save some weight over the three optic setup, but still want to glass off a tripod all day. Plus with the larger field of view and ability to double as chest mounted binos... they are getting looked at serisously hard.

Using 10s and a spotting scope 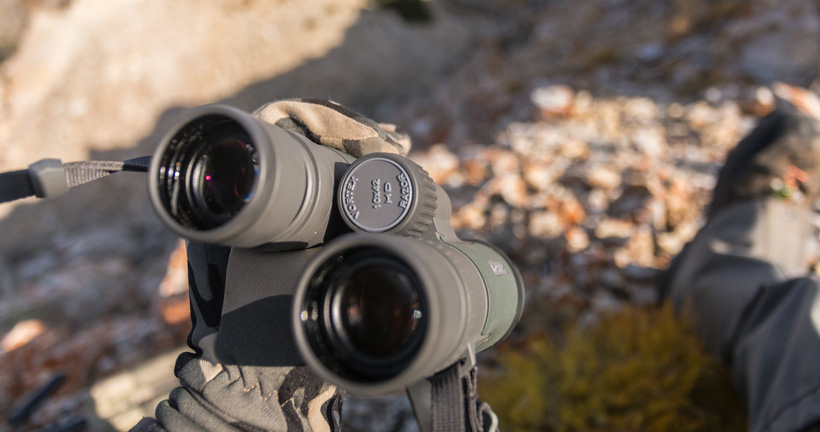 This is the system I started out with way back in the day. I loved running 10x42 binoculars off a bino harness and then when needed I'd pick apart the terrain with my spotting scope. Back then I just glassed off my knees with the 10s because I felt that they were steady at that magnification for close basin action (but they are nowhere near the level of stable as tripod mounted binos). The wide field of view also allows you to dissect a lot of terrain in fewer grid patterns. After I finished glassing with my 10s, I’d move right into the spotter and use that off and on throughout the day. Back when I ran this setup I feel like I used the spotting scope 60% of the time and the 10s 40% of the time.

Since 10s are extremely steady, they are a bowhunters best friend when stalking in on an animal. The 10s and spotter combination works great, but if you’re sitting and glassing all day trying to pick out the subtle ear twitch or antler tine, glassing with 10s will get uncomfortable fast if you’re using them off your knees instead of mounting them to a tripod. Also, even if you do mount your 10s to a tripod, the low magnification is going to make picking up bucks midday a little more difficult. Yes, you do have a spotting scope next to you, but this also isn’t the easiest method and your eyes will slowly hurt from squinting all day. On top of that, you’re limiting your field of view.

I’m not a fan of this system. To me, you can never replace the value of spotting scope. If you’re strictly an elk hunter, then yes, leave the spotting scope and 15s at home.

Are 15x binos better than a spotter for glassing big country? Without a doubt. But you have NO ability to take a closer look. If you value the ability to asses sex or trophy quality, the spotter is a necessity if you want to save a ton of time, effort, and boot leather.

I do not suggest running 10s and 12s on the same hunt (in your backpack at the same time). They are too similar in magnification and this is not the best in terms of weight and what you're gaining.

The push for 12s being the ultimate backcountry binos

Most people already have 10x42 binoculars. So if they’re going to add another pair of optics to their line, they would probably lean toward 15 power binoculars because 12x binoculars are not that much different than 10s.

But… hear me out for a second. I honestly think that 12 power binoculars could be the ticket on backcountry hunts (as long as you have a spotting scope with too). 12s are sort of like the middle ground in terms of how much they excel for glassing off a tripod, yet are small and nimble enough to be carrying around your neck in a bino harness.

The importance of a spotting scope 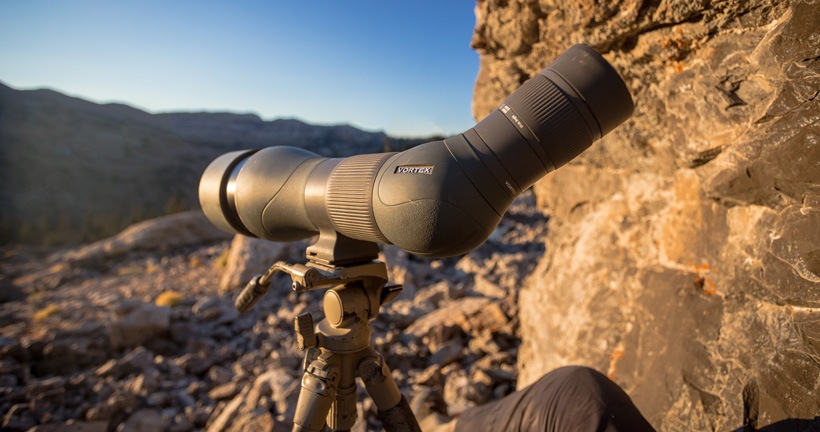 Nowadays I prefer to use the 15s for most of my glassing sessions. The spotter always has its place in glassing, but when you glass with a spotting scope for a long time, your eye will start to strain and feel uncomfortable. The main purpose of a spotting scope is to take a closer look at something or determining if that branch in the shade is really a branch or an antler tine.

Also, if you’re looking to find the biggest buck on the mountain, a spotting scope will save you a lot of leg work being able to zoom in and assess trophy quality. Also, a spotting scope allows you to not blow up a basin. What I mean by that is you can glass from a longer distance and can zoom in to tell if a buck is an average 4 point or one worth going after rather than hiking closer which could potentially blow out a spot in front of you or several spots if you need walk on the backside of a ridge that could potentially wreck your Plan C and D areas.

If you’re just starting out and looking to buy optics for the first time you have a lot of options in front of you. I suggest looking at what types of terrain you'll be hunting, the animal you'll mainly hunt and...

Keep in mind that there really isn’t a “perfect” solution when it comes to optics. There will always be times that you wish you had a slightly different system. Optics are expensive, so buy the setup that you will use for the majority of your hunts. Remember that each optic shines in certain situations and one can not really replace others without sacrificing in one area. For example: 15x binoculars are not a replacement for a spotting scope, 12s might be a great medium ground option but you’re going to be sacrificing magnification power and you will have a huge decrease in field of view over 10s, 15s are also difficult to hand hold.

Comfort is king when glassing all day and is why I still feel the three optic system is ideal if you don’t mind carrying the extra weight. But... I'm seriously thinking about selling a pair of binoculars to pick up a pair of 12s. Also, it would be great to be able to mix and match optics based on the hunt, but that might be out of budget for a lot of us.