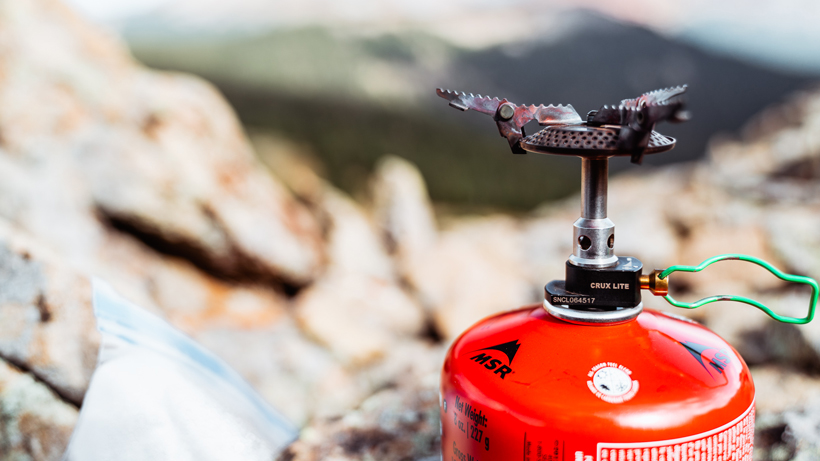 In the world that is backpack hunting, we are pretty lucky to have the gear choices we do today. There are so many different options out there to help folks along with their backcountry adventures. Whether it’s featherlight shelters to keep us out of a storm or backpacks that can carry much more weight than we can. If we need something, it’s likely out there to help. One of the main gear items in a backpack hunter’s arsenal is a stove to cook/boil water for dehydrated meals, coffee, etc. In a nutshell, a hunter can either go with a full stove system like a Jetboil or an ultralight stove like an Optimus Crux Lite. And each type has its pros and cons, which is exactly what we’ll chat about today. 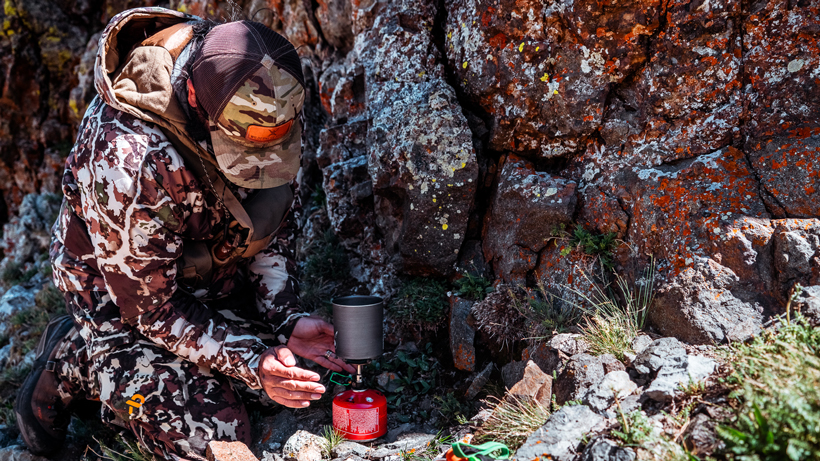 The ultralight craze is alive and well in the backpack hunting community. Let’s face it: the less weight we’ve got to carry around before a harvest, the better. Ultralight stoves are super popular here. They are nothing more than a tiny stove that weighs mere ounces. Picture a bunsen burner that you may or may not have used in science class. Pair them up with a small pot to hold some water, a fuel canister and you’re in business. Some have an ignition button, but most don’t and will require a lighter to start up. A fantastic option for someone looking to shed weight in their system.

Of course, the most obvious pro to running one of these ultralight stoves is right in the name. They are ultralight. On top of that, they don’t take up nearly as much room as the full stove systems we’ll touch on below. Something else that has caught my attention through the years is how moldable these are for each individual. What I mean by that is a hunter can essentially create their own little cooking system with whatever pot they wanted and whatever ultralight stove they wanted. This is a huge plus when it comes to tailoring your gear to you. Ultralight stoves are also much more affordable than their full-sized cousins. Most cost between $30 to $60.

I’ve personally used one of these ultralight stoves for years now. While most of that has been without complaint, there are some downsides to these. The first being that the flame is totally vulnerable to the wind. Meaning that the advertised three-minute boil time that was on the package will likely be tripled in some cases. When the wind is howling, the flame dances around and has a hard time concentrating heat on your pot, hence the longer boil times. Along with that comes another con: fuel efficiency. If it’s taking two to three times longer than it should to boil water, you’re using that much more fuel each time. I’ve often found myself bringing a large fuel canister with me on extended backpack hunts for this reason. Also, the pot that you’ll use with these is not going to be actually connected to the stove. It simply rests on top. If you aren’t careful, you could knock the pot of water right off of the stove. 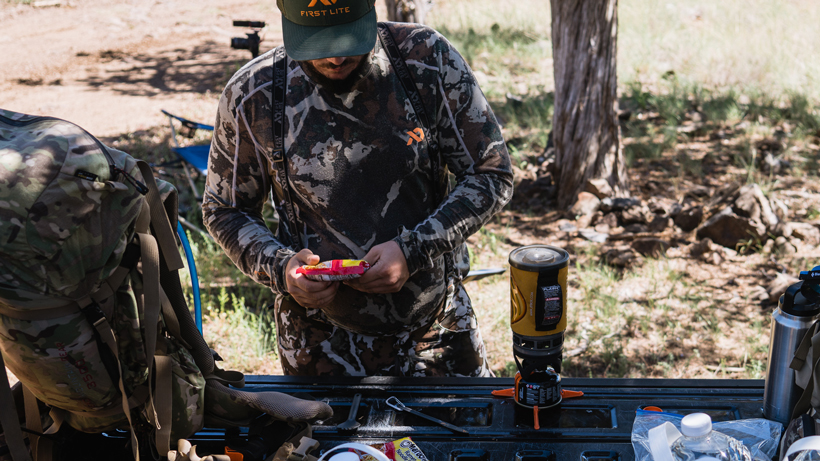 An awesome setup for the backcountry, the Jetboil Flash Stove System.

I’ll go out on a limb here and say that these full stove systems are probably the most commonly used out there. It was certainly my first stove ever and I’m sure the same could be said for many of you. These are exactly what they sound like: a full system that all works together in the name of boiling your water. There is a cup, a stove that attaches to that cup, a fuel canister and sometimes even a stand for the canister. Many of the stoves have an ignition button as well, so you wouldn’t need a lighter for it.

One of the biggest upsides of a full stove system is that it’s a one stop shop. When a person buys one of these, they’ll have everything they need (minus the fuel canister) in order to be boiling water up on the mountain. And they won’t have to worry nearly as much about knocking that pot off of the stove because it’s attached. Then there is the fuel efficiency. These stoves are much better in the wind, meaning that you’ll use less fuel and have water boiling quicker than the ultralight ones. Trust me. I’ve been that guy jealous of a friend who gets to eat before me. Because of the amplified fuel efficiency, a person likely won’t have to bring a large fuel canister back there with them. This is entirely dependent on how much someone is using the stove, though, so keep that in mind. I’ve gone a full seven days on a small canister, boiling two to three times a day. 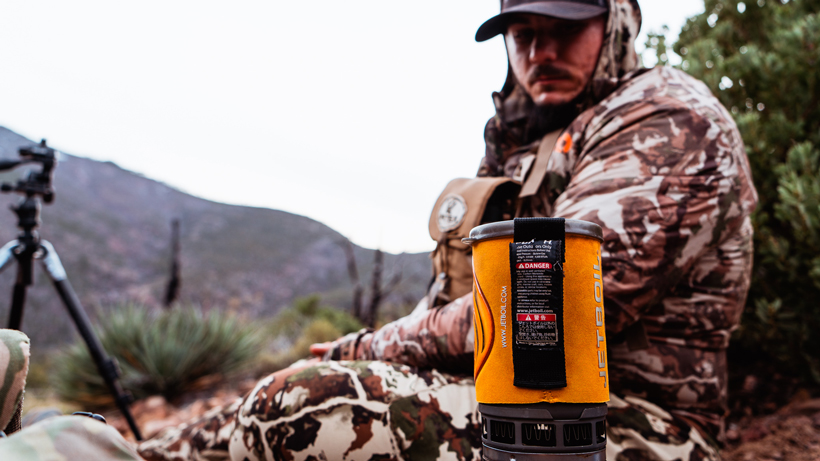 When compared to their ultralight cousins, an obvious downside of these full systems is the price. Some of them reach north of $200 for a full kit with most north of $100 while the ultralight versions are at most around $65. So a person is definitely paying for convenience here. Weight and size are other areas to look at. These full stove systems are usually right at about a pound, sometimes more. Ultralight versions are mere ounces. And, because of their larger size, they’ll be taking up more room in your backpack, meaning less room for food. In my eyes, I see that as less time I can spend on a backcountry hunt. That right there is one of the main reasons I ended up trying an ultralight system.

Which one is best? 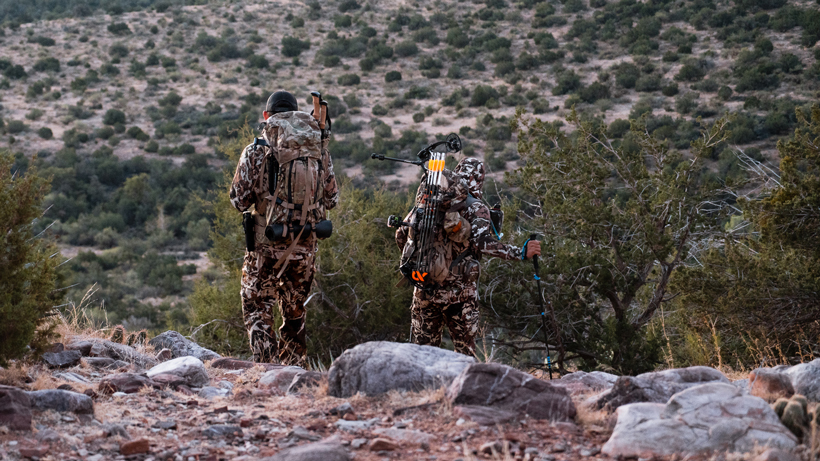 So, in the end, which one is the best? Each of them have their own pros and cons. It all comes back to one of the coolest things about backpack hunting, which is being able to mold your gear to you and your style. What is a con for one person, may not be a con for another or at least one to worry about. For the ultralight crowd, it might be worth it to deal with cooking in the wind. Maybe you build a wind barrier. I’ve done that in the past and it works. I still ate and still had my pack lighter than before. But maybe time is more important to you in the field, so a full stove system is a better option. That extra weight is worth what you get back in fuel efficiency and time. A backpack hunter really needs to weigh their own pros and cons. Find out what is important to you and go from there. Make your own path and make it happen.

CHECK OUT stoves for the BACKCOUNTRy HERE