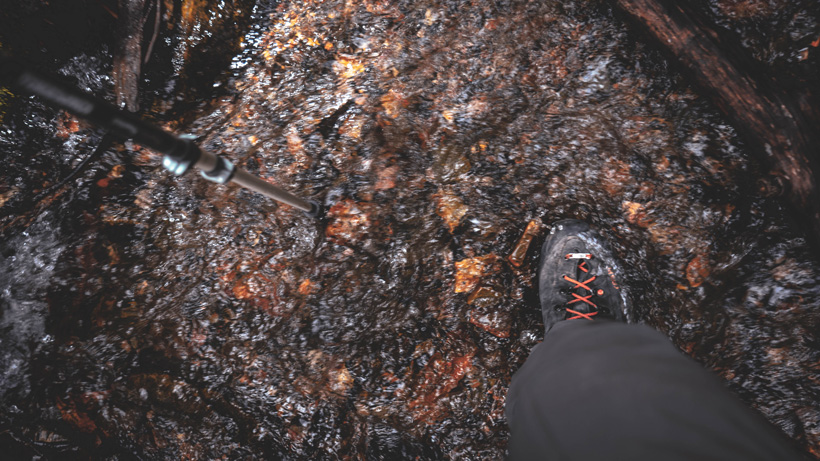 Boots are without a doubt paramount when out cruising in the mountains. No matter what terrain you may be occupying, your boot selection could make or break your trip. One thing I always mention to others is that there are two areas to invest in: your feet (quality boots) and your back (quality pack).

The difficulty with boots, though, is that it may require quite a bit of buying and trying to find the best fit unless you can go somewhere and try them on. Luckily for you, I purchased a pair of Crispi Briksdal SF GTX boots to test and run through the paces, which may help you decide if these are the boots for you. I'm not going to bore you with technical words and specs — my goal is to provide an unbiased opinion that a consumer can appreciate.

Best Conditions for the Briksdal SF GTX: Mild to steep terrain where waterproofing is needed. Early seasons (spring bear) or mid/late season hunts. During my use, they were too warm for summer wear and early archery hunts due to the insulation. I like these boots for temperatures from 30 to 60 degrees if actively hiking/hunting. For warmer seasons, look at the non-insulated version here.

This will be my third pair of Crispi's and one thing that carries on from model to model is top tier construction. The sewing isn't sloppy, no frays in the materials and solid soles with no delamination. They carry on the same quality construction that I have noticed from Crispi boots, which is why I continue to try different models in their lineup. I have somewhat "normal" feet so I didn't need to order a wide boot. I did order a half size up, which is recommended. Overall, the fit was snug and secure without being too binding accompanied with a nice amount of cushion around the upper ankle area. When wearing the boot you can definitely feel the stout quality throughout the boots.

As far as breathability, I had no issues when it came to my feet getting overheated, resulting in perspiration. They dried out well for the conditions I used them in such as early morning dampness or moisture from crossing creeks. My feet tend to run on the colder side so it was nice to have just a little insulation for when temperatures are lower. I used them for some coyote hunting as well and did notice that over time being stagnant my feet slowly felt the cold, but that was to be expected.

An area I see overlooked in other boot rundowns is the lacing style. When I tied them tight and went hiking, I rarely had to stop to readjust my knot or lacing. I personally like the lacing on the Briksdal SF GTX more than others because if you really want to suck that heel back for steep downhills, all you need to do is weave the laces through the webbing where your ankle naturally hinges. This is a feature I will continue to look for from other brands when choosing boots from now on. This adds another form of security for your feet, which aids in minimizing heel slip. The lacing also runs almost the full length of the boot, giving you overall control of securing your feet in place. The toebox is what I would call normal. I don't have wide or narrow feet and had no issue with the toebox being "cramped," which is a commonality found in the stiff mountaineering boots brands. These are not considered mountaineering boots like La Sportiva, Scarpa or Hanwag, but I figured it should be mentioned in case you try on a pair of mountaineering boots and need a little more toebox without losing stiff feel. There is also a nice full rubber rand, which, like most boots, helps minimize wear and tear while traveling in nastier terrain with high abrasion areas.

Like mentioned earlier, these are the stiffest boots offered by Crispi. Granted, most of their boots don't need to be "broke in," but I would highly recommend wearing these boots prior to going on a hunt. They are certainly stiffer than the Thor and Nevada's I own and I noticed off the bat after a mile or so that the arch of my foot could feel it — not in a pain or ache, but a sensation that these boots were working my feet slightly different. If this is your first stiff boot, I would recommend hiking in them a couple of times to adjust to the feel. Due to the stiffness, they excel superbly on sidehills and digging into the mountainside straight on. When I wanted to slam the toe into the incline to gain elevation there was no give nor folding.

One of the reasons why this is my go-to boot when choosing footwear for a hunt has to be the grip. I've used them on damp vegetation, snow-covered terrain and rocks with no issues of feeling my feet give way from under me. When sidehilling, I could feel a positive purchase into the ground, which could have something to do with a mix of the stiff sole and tread pattern. When it came to creek crossings and traversing through vegetation, I had zero issues with water penetrating through the stitching or tongue of the boot. The insoles were standard and didn’t cause any problems with foot fatigue, yet I will probably upgrade them to something a little more custom for the next season.

Other things to note

One thing I did notice when wearing these boots was I had no issues with the tongue of the boot favoring one side or the other throughout my hiking like I have in other boots as long as my boot was tightened properly.

While these are my favorite boots in my collection — and the reason I will be purchasing the non-insulated version — it needs to be noted that they are fairly heavy at almost 4 lbs for a pair of 10s, likely due to the insulation. You can definitely tell they are on your feet initially; however, once you start hiking, that sensation goes away.

Overall, these boots are bad to the bone. I would highly recommend them for anyone looking for a stiff boot from a company with a great reputation. Hopefully, this write up helps you if on the fence in trying the Crispi Briksdal SF GTX. You can view them in the goHUNT Gear Shop here.

If you have any questions regarding these boots, feel free to leave a comment below.