For a few years in Nevada, I spent the majority of my hunt helping good friends achieve their dreams of taking a nice velvet mule deer. I didn’t mind the lack of time for my own hunt as I thoroughly enjoy helping others achieve their goals and showing off the beautiful mountains in my backyard is something I will never tire of. After a few weekends (mostly helping my friends, I was able to sneak away for a three-day hunt in pursuit of my own trophy. I knew exactly where I was headed: to my honey hole.” It’s roughly a five-mile hike on a less-traveled trail that meanders through aspen groves, rock outcrops, Manzanita bush and eventually into large pine offerings. On the way up, I always pass by what my dad and I call “the Mohicans’ spot.” If you remember the movie, “The Last of the Mohicans,” there is a scene where Chingachgook and his two sons are trying to make their escape after recovering Cora and Alice Munro. During the chase, they try to fool Magua and the others giving chase by throwing their canoes over a waterfall and, then, proceed to go under the waterfall via a small trail—what a great movie! While not as intense as the movie, “the Mohicans’ spot” always signifies the half-way point on the way up to where I camp. You don’t actually go under a waterfall, but you do pass by some large rock faces and edge right up to a creek that cascades down a rock face for about 300 yards. It’s really beautiful.

Once at camp, I can glass from just a few feet from my tent and it offers spectacular views. There is a large, sweeping, u-shaped canyon that is spotted with pine trees, massive rock-slides and heavy brush with lots of flowers and forbs. Toward the bottom, there are aspen thickets and willow brush that usually hide a few does and fawns. There is always water here and, at the back of the canyon, there is a large marsh-like area that looks as if you are in the Yukon hunting moose! Directly across from camp, there are two large brushy spots roughly 200 yards across that are speckled with pine trees and small rock ledges with several water seeps that are visible from a distance. I usually spend a large majority of my time scanning these two “green spots,” as they’ve come to be known and rarely does turn up a buck or two.

This trip was no different and within minutes I had located a decent 4-point that I decided was worth putting effort into. It’s a fairly easy slip down from camp to the bottom of the canyon and, because of the rock ledges, it’s also somewhat easy to take the distance from a couple of thousand yards to around 200 yards. Now, in position for some serious sneaking, I began to inch closer, watching the deer, always keeping some form of vegetation between us. Within an hour I had closed the distance to 72 yards. I maintain a strict 80 yard limit with my bow and spend a lot of time practicing with my lowest pin that’s set at 80 yards. I waited for a broadside shot and let the arrow fly. To my utter surprise, he dropped like I’d hit him with a 300 ultra-mag! It’s still the only time in my life—bow or rifle—that I’ve dropped a buck where he stood. As I walked up to my buck I was happy with the kill, but not overly excited as I’ve killed bigger, but time was limited and I now had a lot of tasty eating headed to the freezer. 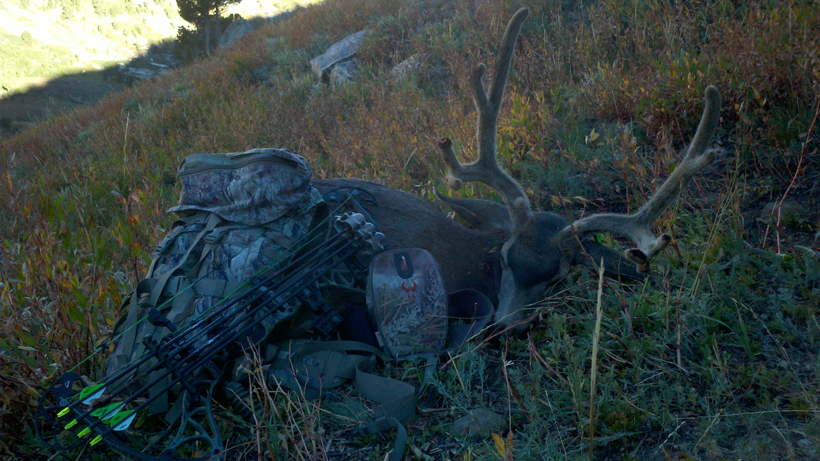 I wasted no time and began to bone out the buck. I usually start cutting the hide along the spine to expose the back straps and then work the hide down to get to the front and hindquarters. I typically straddle the deer while doing this, but, this time, had worked my left leg up the side of the deer and my right leg was at his tail. I positioned my Havalon knife in my hand like you’d see in a horror movie and was pulling it to me along the spine. In an instant, the Havalon broke through the hide and stuck—in its entirety—into my right quad muscle. About two seconds later blood had already made its way through my underwear, athletic tights, and pants. Not knowing what veins or arteries I may have clipped, immediately, I put immense pressure on the wound. After somewhere around 10 minutes, I released pressure to have a look and noticed that it had continued to bleed but wasn’t outrageous and I felt comfortable enough to have a look at the damage. 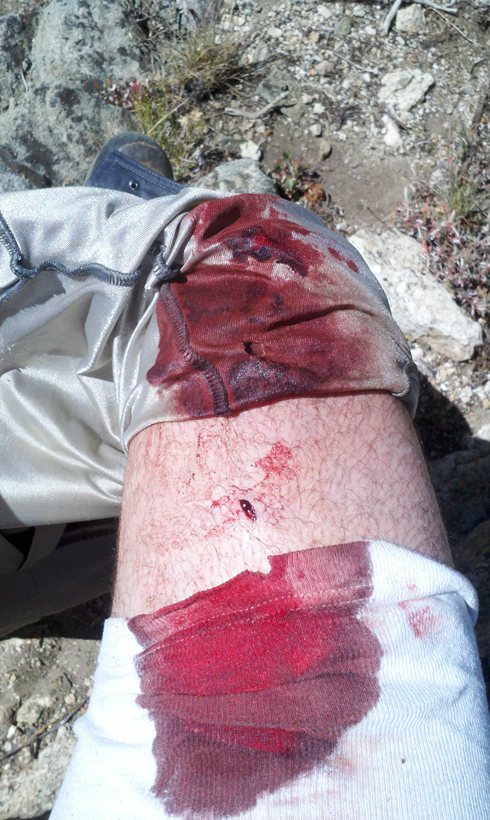 The bleeding had mostly stopped, but being located in such a large and important muscle it would start bleeding heavy again every time the muscle flexed when I would move around the deer. Knowing I had a long six-mile hike out with 100+ lbs, I began to get a little bit nervous, but, ultimately, believed I’d be fine. I finished removing all of the meat from the buck and sat down to apply pressure before starting my hike back to camp. I couldn’t help but think that, at some point, I may have to put on a light tourniquet of sorts over the wound with my belt. I was actually glad I had my belt with me—just in case. Eventually, I made it back down to my truck without too much difficulty and visited a physician shortly after. I have thought a lot about that experience and consider what might have happened had I nicked something a little more serious?

Backcountry hunters know that it’s extremely important to be prepared in the event of a mistake or accident and I’ve developed my own list of “must-haves” when in the backcountry and would like to share them with you in the hope that it may benefit you in some way. I should mention that what started as my backcountry “must-haves” has turned into what I take with me every time I am out hiking. Dramatic? Maybe. But each item I carry has a story behind it and no matter how close to home or how short the hike—or how good the weather—the following is what I carry with me. I’d like to thank my dad for teaching me early on that you can never be over-prepared. 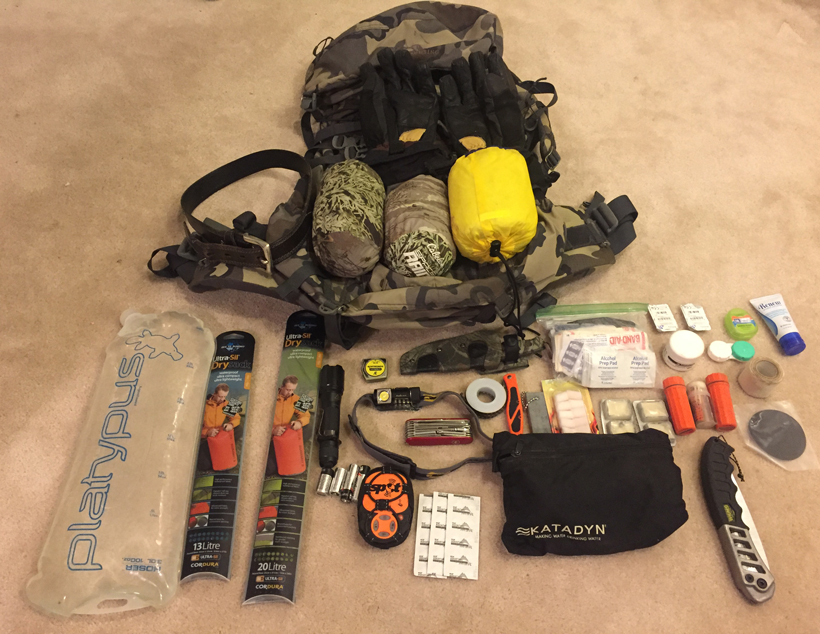 Each of us has a unique set of needs and I would encourage you to start building your own list of must-haves in the event that you make a mistake and go to reach for something you don’t have with you. If you have questions around brands or specifics around the gear, let me know. My email address is on my author page.