Choosing how to process your own wild game meat 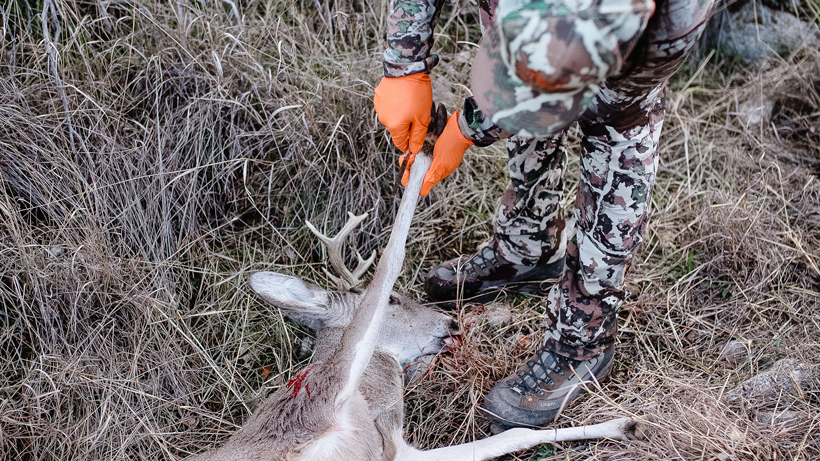 After finding out that the meat processing place I was planning on going to was closed, I was left in a bit of a pickle. An animal lay at my feet and I had never ever butchered my own game meat. Not to mention that I wouldn’t be able to bring the meat into the shop any other day for the next week due to work obligations. So, apparently the time had come to learn how to do this stuff myself.

One of the biggest questions I had back then was what to do with what cuts of meat. I hacked my way through it, but through the years, I’ve come up with my own process for what and how I personally like to cut up game meat. For anyone new to doing so, I’ll lay it out down below; not only what I prefer, but other simple options for various cuts of meat.

To clarify, this is not going to be a step by step on how to cut up an animal. This is meant to give some ideas on what to do with what parts/cuts of meat. 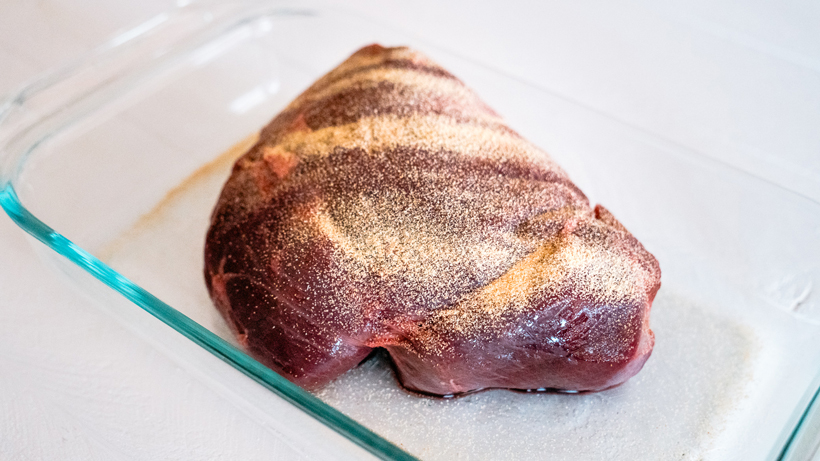 Before we dive into animal parts, let’s get something straight. All of that fresh game meat at your feet is just that. It’s just meat and there’s no reason to be intimidated by it. We go to the store and buy beef, pork, etc. all of the time. That deer or elk is no different in terms of cuts. The only difference is that we’re cutting out the middleman and processing the meat ourselves.

The reason I bring this up is that I feel like many folks try to overcomplicate meat processing — as if they’re going to do it wrong. I know when I started, I was paranoid about doing it the wrong way. Sure, there are better ways of cutting meat than others (against the grain/with the grain), but in the end it’s just meat. It’ll taste the same no matter how sloppy your cutting is. Might have to chew a little more, but Rome wasn’t built overnight.

I am by no means a professional butcher. I’m sure there are better ways of doing things, but this works for me. What I lay out below are suggestions purely based upon my own experience and the experience of others I’m acquainted with.

The hindquarters are probably my favorite part of any game animal. They seem to hold the highest variety — due to their size — and are dang tasty. Because of those large muscle groups, breaking down a hindquarter is also pretty simple. Once separated from the bone, a person can almost separate the muscle groups apart by hand. From there, let your imagination run wild. 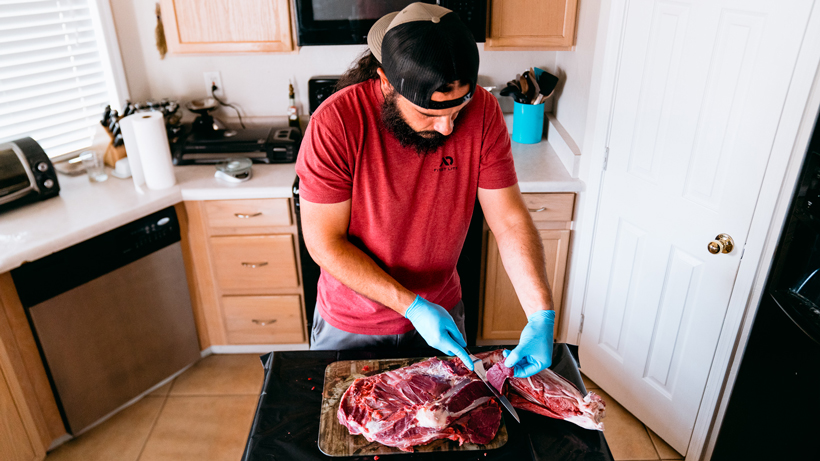 Personally, I go fairly roast heavy here. Roasts work great for our household as they don’t take a ton of effort to prep. They’re a great “set it and forget it” type of cut with the aid of a crockpot, of course. Three major roasts can be found here: the top round, bottom round and sirloin. Our sirloins are always kept whole and saved for roasts. The top and bottom rounds are often saved for roasts, but I’ve also gotten some great steaks off of these cuts as they don’t have much silver skin on the inside of them. Aside from those three major cuts, there is also the eye of round, which kind of looks like a mini backstrap and we treat it as such. This is kept whole, cooked whole and cut into medallion steaks. Remember to always cut against the grain when cutting steaks. If you cut with the grain, you’ll end up in much more of a tussle trying to bite into that steak.

Shanks (forearm) for me are always cut up for grinding. We like burger and can’t really have too much of it.

What we do with front quarters is going to be heavily dependent on how big the animal is that we’re working on. If it’s a smaller animal, like a Coues deer, they’ll either be used to make a blade roast or just cut up into grind. Coues blades (top part of shoulder) will generally fit in a crockpot. For bigger critters, there are some more options. I’ve gotten pretty good sizes of steak off of the blade of the shoulder on an elk. These are easily filleted right off of the blade. You can also prepare a blade roast with animals like mule deer or black bear. A roasting pan might be in order to fit the whole thing in, but it can be done and it’s delicious. This is also a great place to get stew meat or fajita meat. Just cut the meat accordingly, in terms of size, and enjoy. Jerky is another good one, especially from that fillet right off the blade. And, of course, you could also just cut the entire front shoulder up for burger. I’ve done this often as I like my burger.

Again, I’m a pretty boring guy with shanks. These are all cut into 1″ cubes for grind. 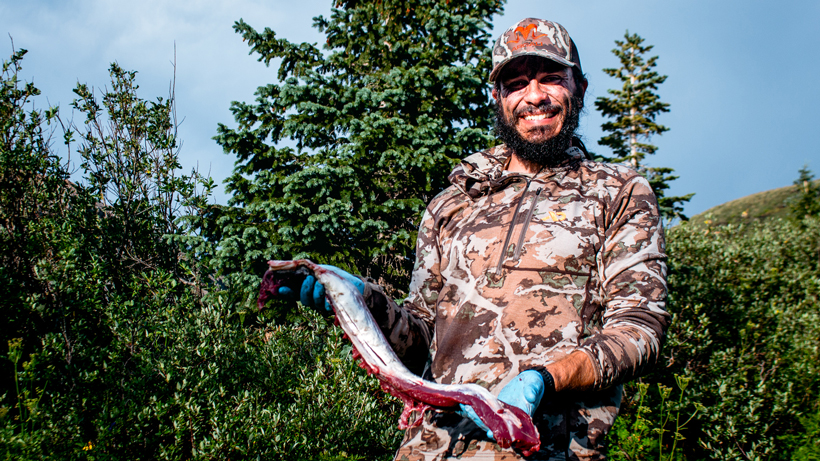 Backstraps, or loins, are what gets the most press in the wild game world. It is the two boneless strips of meat that run down each side of the spine. They’re easy to process, don’t involve any bones and are delicious, of course. I’m a steak guy through and through with these. Most of the time, I’m pre-cutting them into steaks as that’s what works the best for me. I’ve heard it said that they come out even better when kept whole, cooked whole and then cut into steaks. Personally, I just like the convenience of being able to grab one or two steaks at a time though. To each their own. 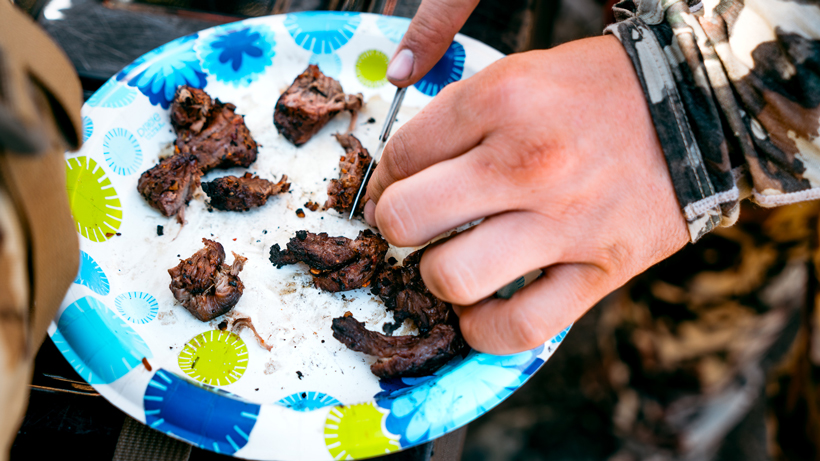 Tenderloins are often mistaken for the backstraps and vice versa. The tenderloin is a completely different piece of meat, though, from the loin or backstrap. Located underneath the spine in between the last rib and hip, they (there is one on each side of the animal) are the most tender part of the whole animal. So tender, that you need to be careful when removing them as they tear very easily. In terms of prep, I don’t think I’ve brought home tenderloins in quite some time. They get eaten in the field over a fire. Even with no seasoning at all, these things cut up into 1” wide chunks are phenomenal skewered on a stick over a campfire. When I have brought them home, though, they are kept whole and cooked whole.

"Save the neck for me, Clark" Cousin Eddie – Christmas Vacation

Eating a neck doesn’t sound quite that appetizing on the surface, but I assure you it’s a great piece of meat. Whether it’s kept whole or deboned into two different slabs, the neck makes a fantastic roast. There’s quite a bit of connective tissue in the neck, so slow cooked meals are where it’ll shine. This will give an adequate amount of time to break down all of that connective tissue. I usually fillet a roast off of each side of the neck. You could also turn the neck into grind.

Throughout the process of processing your own wild game, you’ll have quite a bit of scrap meat whether it’s from doctoring up certain cuts, rib meat (feel free to keep these whole as well) or simply from shaving every ounce of meat from a bone. That’s one of the beauties of doing this yourself. You can take the necessary time to do so and increase your yield. All of this stuff is perfect to throw in your “grind pile.” Burgers, sausages, taco meat, etc. 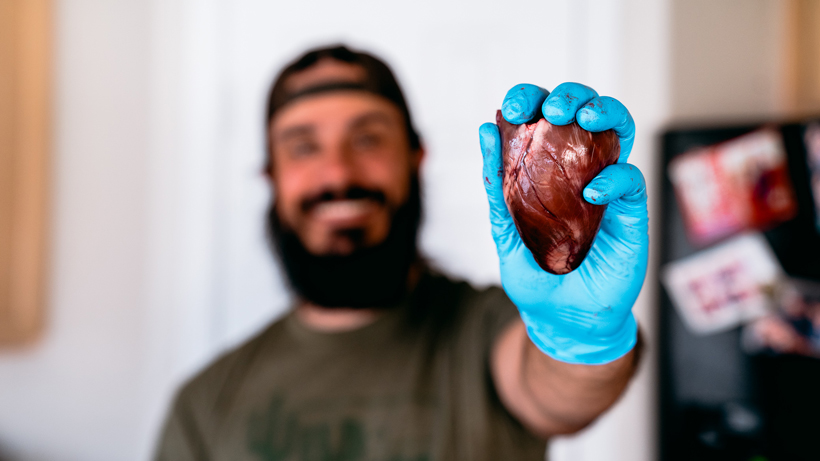 Just for a second, let’s touch on some organs. Now, you can get as crazy as you want with this. Folks eat heart, liver, kidneys, spleen — you name it. Out of those, I love the heart. Never was a heart guy until a buddy of mine introduced me a few years back. Since pan frying heart strips in butter that night, I’ll never leave a deer heart in the field ever again. The stuff is incredible. Aside from heart, I’m not a liver guy — at least not yet. And I haven’t tried the others listed above. Like I said though, by all means dive in. 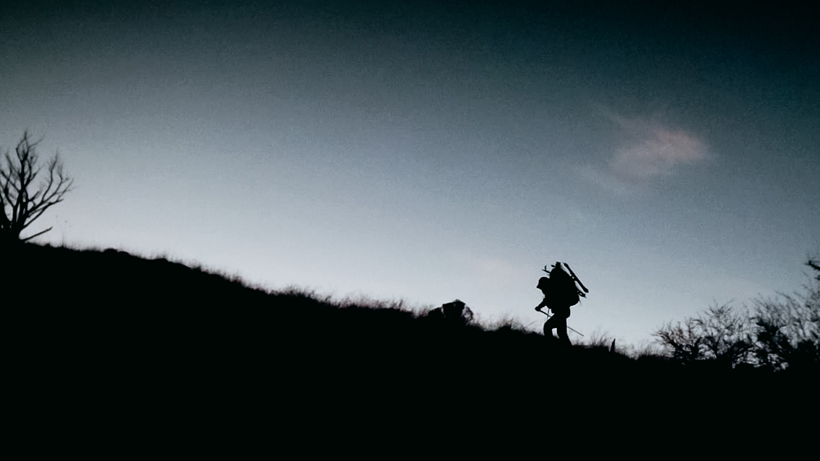 Choosing what to do with what cuts of your wild game meat is completely up to you. Let what you cut and what you cook be a reflection of what you like and what works best for you. If you want to grind the entire animal up into burger, then go for it. If you’d like to cut steaks from every roast on the hind quarter, then make it happen.

When I decided to dive into this whole thing, I was far from a butcher and knew little to nothing. As you can imagine, I watched a lot of videos, some of them even being on VHS! Those are these ancient black boxes that played movies for any youngsters out there who don’t know anything of the sort. With time, things started to make more and more sense. And, now, processing my own wild game is one of the most rewarding parts of hunting for me. Looking back, I’m glad that the meat processing place was closed. Their loss was my gain.