When to chase bulls with a bow? 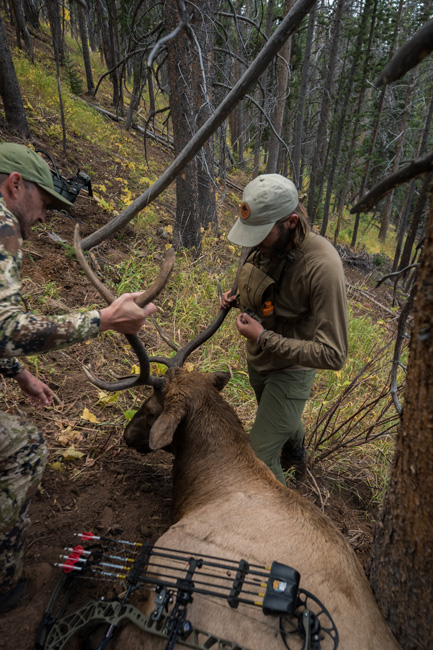 Every year, when requesting vacation days from my work, I have to decide which week I think will be the best week to chase bull elk with a bow. In the past, I have hunted early season, mid-season and late archery season in several different western states with variable success. Each time I hunt these seasons, I have paid special attention to elk behavior, hunter concentration and the weather. Looking back, I can definitely see that all of these factors make elk hunting a different experience, depending on when you hunt, though, they always change slightly year after year. This year (or even in the coming years) before you request your vacation time and get the days off, think about the pros and cons of hunting elk opening week, middle of the season and closing week of archery and what part of the season works better with your hunting style. No matter when you choose to hunt, it is important to pay attention to the little details that make you successful and then make the appropriate changes the following year.

The opening week of archery

The opening week of archery starts as early as mid-August in some states and as late as September in others. In my experience, except for the rare exception caused by high elevation or weather, I have seen that bulls tend to be more docile during this week, sometimes still solo without a harem of cows. There are a few strategies that seem to work better for me when I am hunting early-season archery. I find that if you get in close to a bull and let out some cow calls, a lot of bulls will come in silent. At this time of year, they feel as though they should start gathering cows, but are often not primed and ready to fight. Another strategy that is effective early season — especially when the weather is hot and dry — is sitting on a wallow. If the country is thick and you are having trouble locating a bull, consider trying to locate bulls by bugling at night. If they are not vocal during the day, there is a chance that they will be vocal at night. Most of the time, bugling during the day is less effective early on unless you find a bull that is really fired up. However, anything can happen when you are in the elk woods so if all else fails, start ripping on that bugle tube. Hunting pressure during opening week is different in the elk mountains than later on. From my experience, I usually struggle to find a parking spot during the opening weekend but then rarely run into the hunting pressure throughout the week. I find that the majority of hunters are looking to chase screaming bulls later on in the season when temperatures have dropped and the bulls are more vocal. Typically, the opening week weather is mild and it can be a great time to backcountry camp though there can always be an early snow storm so it is important to be prepared.

How to successfully hunt wallows

Mid-season archery hunting to me is sometime after opening week and before the last week or two of the season. During this time of the season, I find that elk tend to get more aggressive day by day and the rut often peaks sometime during mid-September. Bulls still hold onto their cows all the way through October; however, I have consistently heard the most “bugle-fests” during the mid-season. During this time, using both cow calling and bugling can be an effective way to bring a bull within bow range; however, in high-pressure units, some of the bigger bulls get call-shy quickly. I have seen times where bulls might be bugling on their own, but when they hear me bugle, they may not bugle back. If they have been pressured too much, they may even take their cows and head the other way. From my experience in multiple states, the hunting pressure during the second and third weeks of September is the highest it will be all archery season. Getting in deep could prove to be effective or could put you within arm’s reach of other archery camps if the basin you choose is too popular. The weather during this season is usually a little colder and a good cold snap or snowy day is sure to get a slow starting rut into full swing. The middle of archery season is popular, but that is for good reason; a lot of bulls get killed this time of year.

Learn how to sound like an elk from Dirk Durham here

The last week or so of the season has some pros and cons when it comes to chasing bulls with a bow. Usually, by the last week of season, bulls will still be holding tight to as many cows as they can keep in their harem. They may still be bugling, though it won’t be nearly as aggressive since most elk understand their spot in the hierarchy and hunting pressure has put its toll on the activity and vocals. Spot and stalk or setting up along a travel corridor in a pinch point will prove to be the most successful strategy. Hunting pressure during the final week or two of season is usually dying off as the weather is taking a turn for the worst, most of the local hunters are waiting for rifle season and it is commonly known that public land bulls are hard to kill. However, bulls do get killed later in the archery seasons because there is less hunter interference. Depending on the state, the archery season can extend all the way into October, which can put you in some interesting weather. Be sure to be prepared with chains and a lower elevation backup plan before you head out into the high country chasing bulls this time of year.

When it comes to hunting bull elk with a bow, you can not go wrong as long as you are in the mountains. Yet, there are some distinct differences in hunting early, mid, and late in the archery seasons. Early on, the pressure might be less and the weather might be mild, but the bulls might not be turned on or as vocal. If you are hunting during the middle of the archery season, you might have better rut activity; however, the weather can be unpredictable and the pressure is almost always at its peak. By the last week or two of season, pressure is usually lower, but the bulls are less responsive to calling and the weather can be harsh. Be honest with yourself and think about your hunting strategies before choosing your vacation days that will be spent in the elk woods. If you do this, you will be way better off no matter when you choose to go hunting this fall.